Grandma Mistakenly Texted The Wrong Guy On Thanksgiving, She Had No Clue This Would Change Her Every Thanksgiving Going Forward

A grandmother became an online hit when she texted the wrong person to invite him to Thanksgiving dinner. As it turns out, she used her mistake to adopt a new grandchild and the two have started a new Thanksgiving tradition that is all about how friends become family. 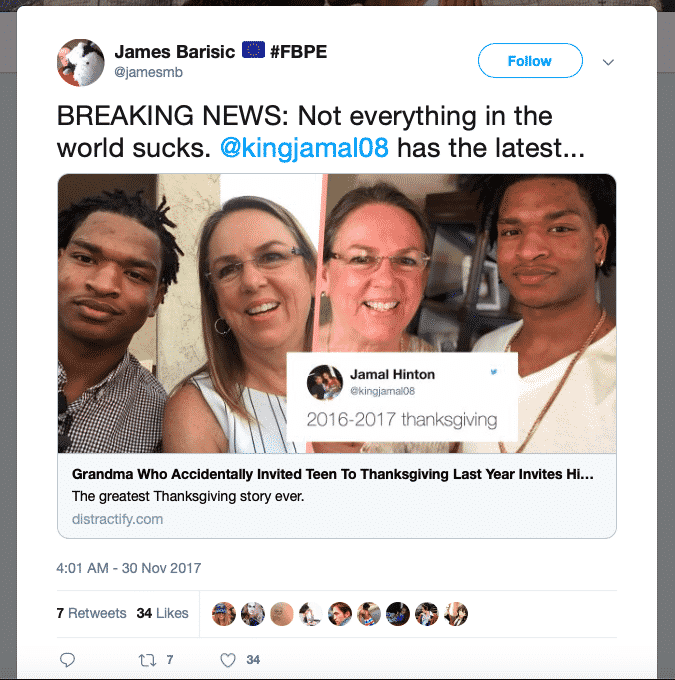 In 2016, Wanda Dench was sending an innocent text message to her grandson inviting him to Thanksgiving when the unexpected happened: her text went to the wrong person. What happened next touched hearts around the world. 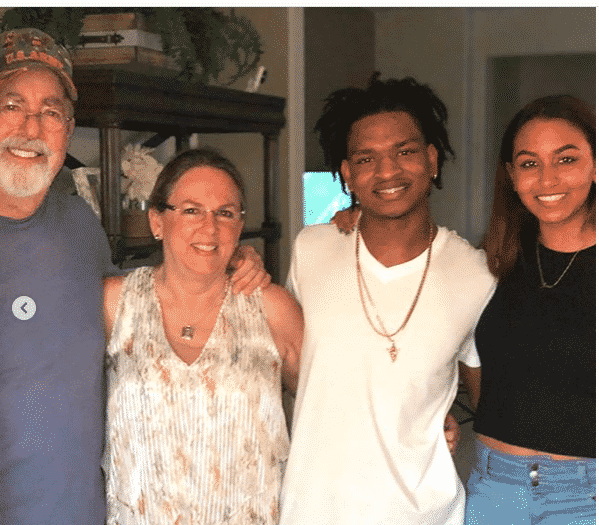 Wanda wanted to invite her grandson to Thanksgiving dinner. Instead, she sent the text to the wrong person. It went to Jamal Hinton, a 17-year old who lived nearby. When she realized her mistake, she invited him to Thanksgiving anyway. 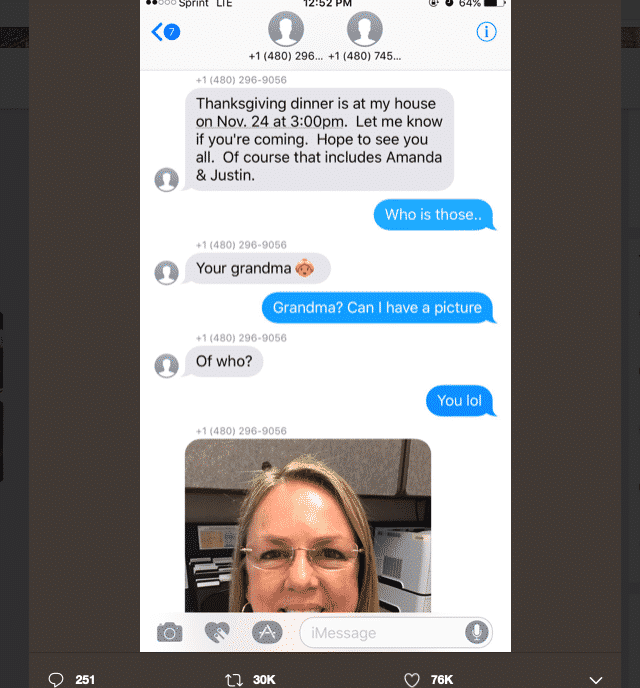 Everything began when Wanda sent a message to her grandsons before Thanksgiving. One of her grandsons got the message with no problem. The other, however, had changed his number without alerting his grandma. As it turned out, someone else had the number. 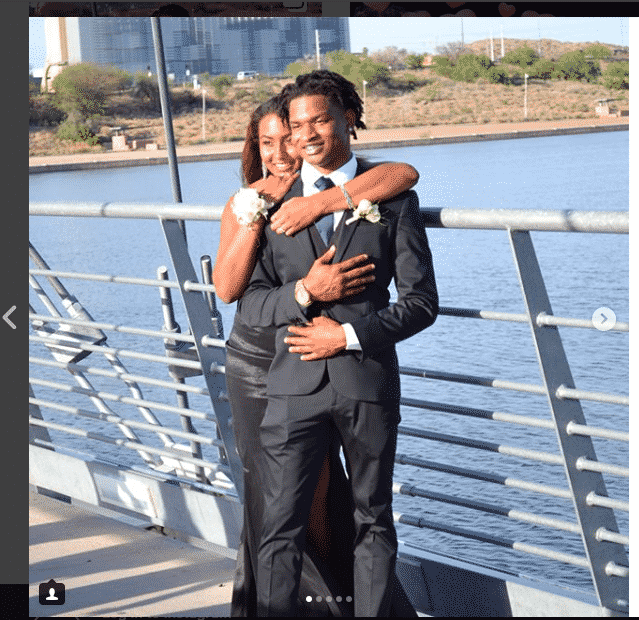 That someone was Jamal Hinton. When he got the message, he wanted to know who was texting him. Wanda replied “it’s grandma.” Jamal replied, “You not my grandma.” He texted back a photo of himself, asking “Can I still get a plate though?” 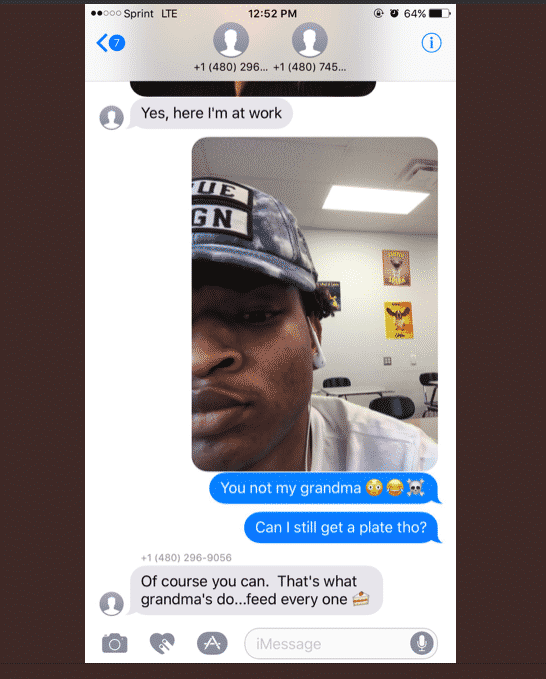 “Of course, you can,” she replied. “That’s what grandma’s do…feed every one.” Wanda lives in Mesa, Arizona, while Jamal lives in Tempe. So, it was basically a halfway point between Phoenix and Tampa, so Jamal decided to attend. 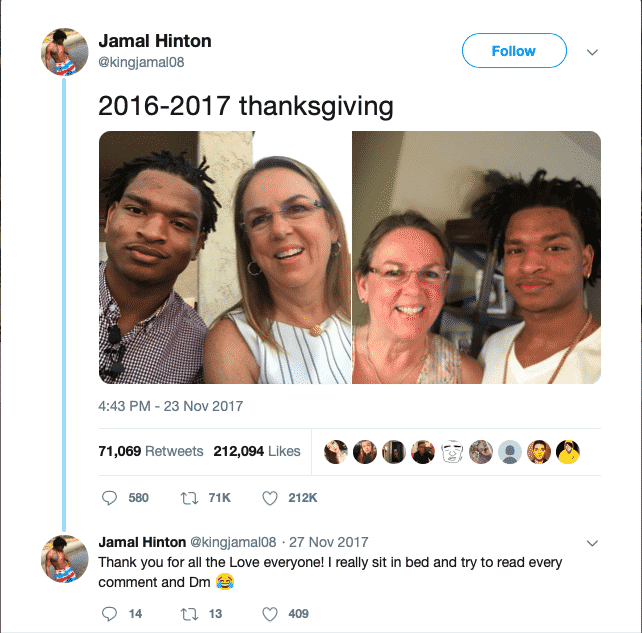 Conveniently, Dench lives in Mesa, Arizona, while Hinton lives in the neighboring Tempe, just east of Phoenix. Someone posted their text messages to Twitter, where it went viral. More than 200,000 people retweeted the comments and nearly half a million people liked it. 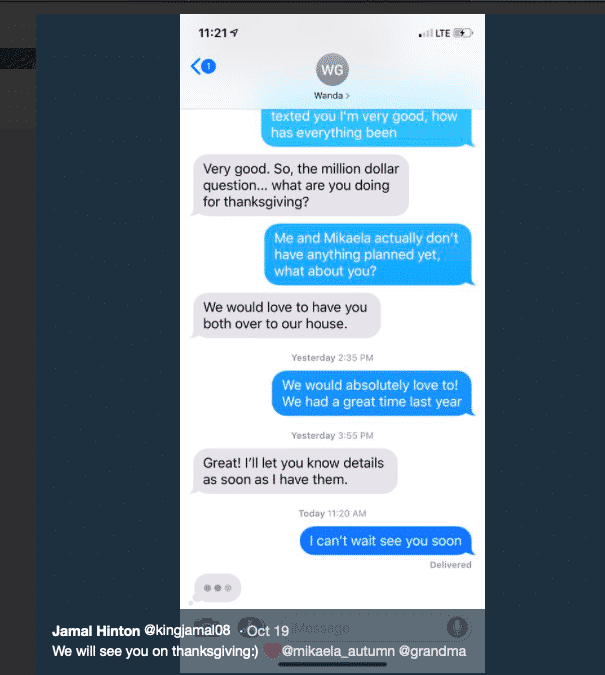 6. A New Friend and Girlfriend 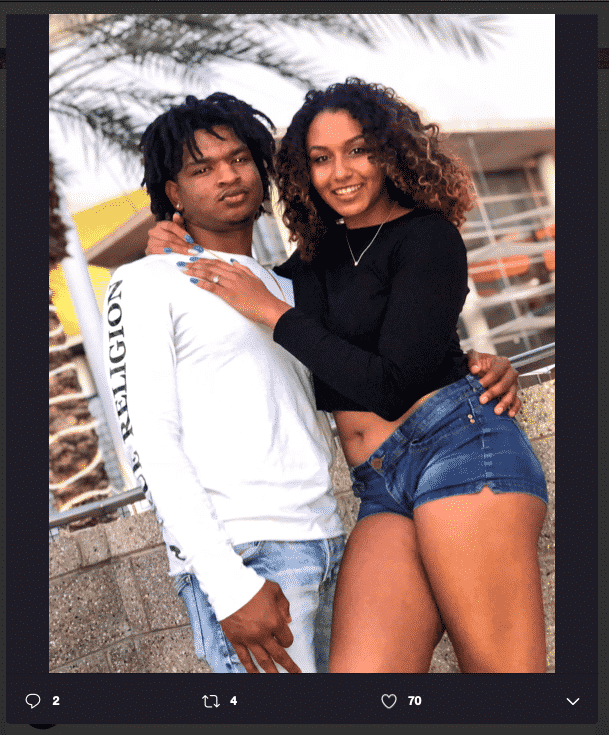 This time around, Jamal brought his girlfriend, Mikaela Grubbs. He introduced her to Wanda. “It was really nice having everybody here,” Dench told The Arizona Republic. Wanda enjoyed having young people around for dinner. 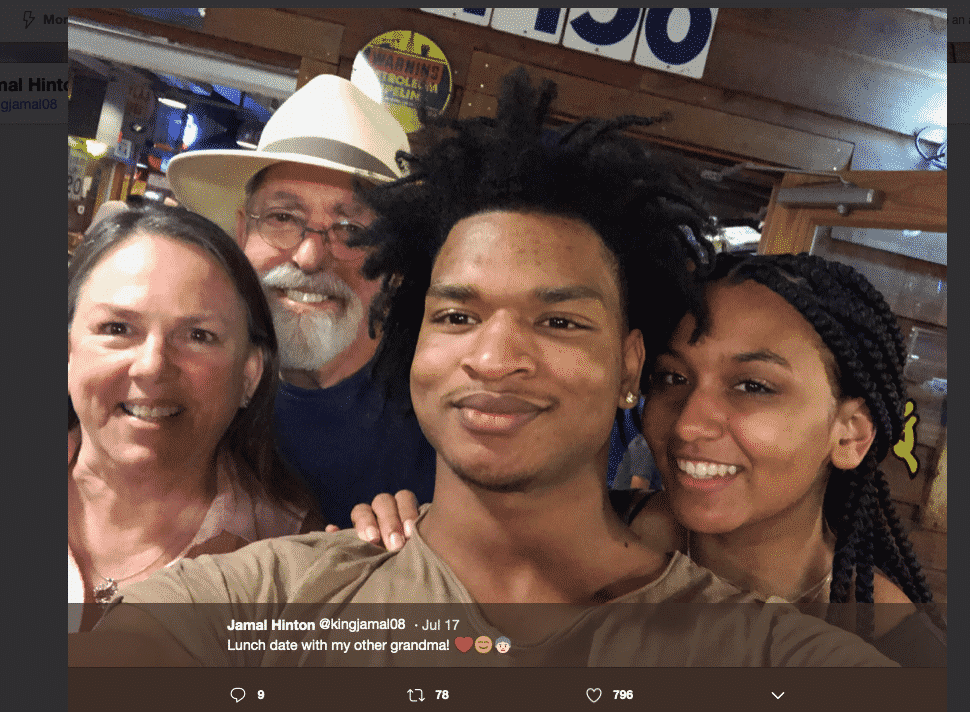 Wanda told the paper, “We got to laugh about last year and reminisce about how it all blew up on our phone and how I had to change my number. We had a laugh and a good time.” That wasn’t the end of the story.

This time, their relationship truly blossomed. Wanda and Jamal chat about once a week. They discuss Jamal’s plans for the future and catch up about Wanda’s family. Jamal has big plans: to attend law school and become a sports agent. 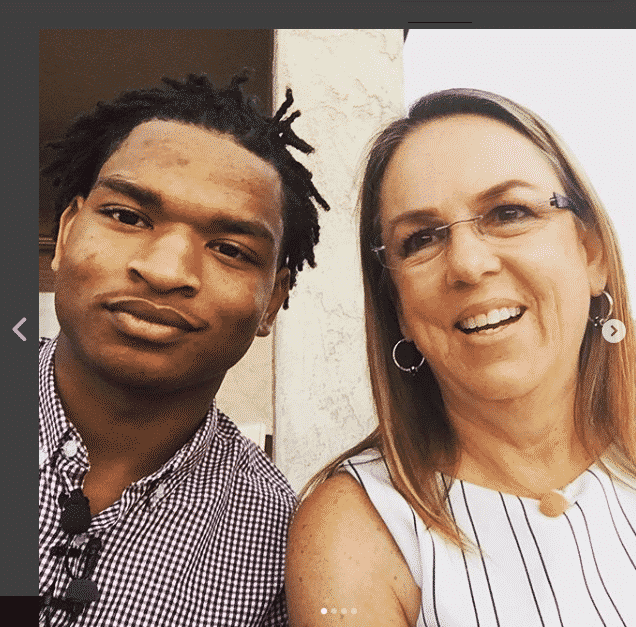 Wanda is delighted with her new friend.  “For him to continue with the relationship, I’m just really pleasantly surprised,” she said. “We’re more of extended family and, best of all, friends.” Her message for others is that even strangers can be like family if they engage in the spirit of openness.

2. Making the World a Better Place 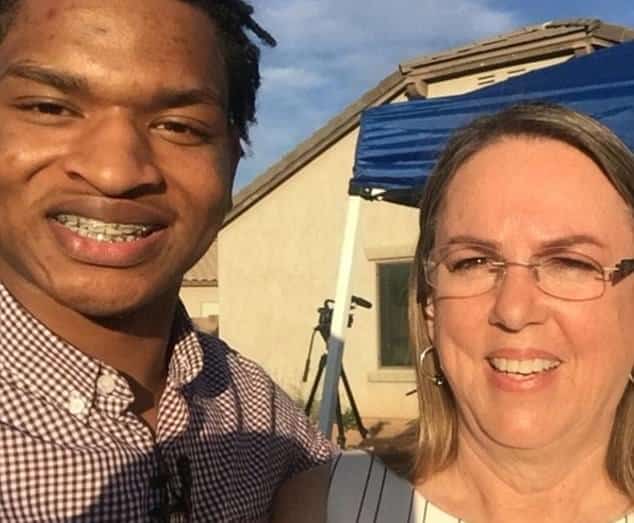 “The world is becoming a better place than it used to be,” Jamal said. “I’m loving it. I love that you don’t have to know someone or know their background to be nice to them.” That’s just the right message for our chaotic times. And the invitation has already been extended, and accepted, for Thanksgiving 2018. 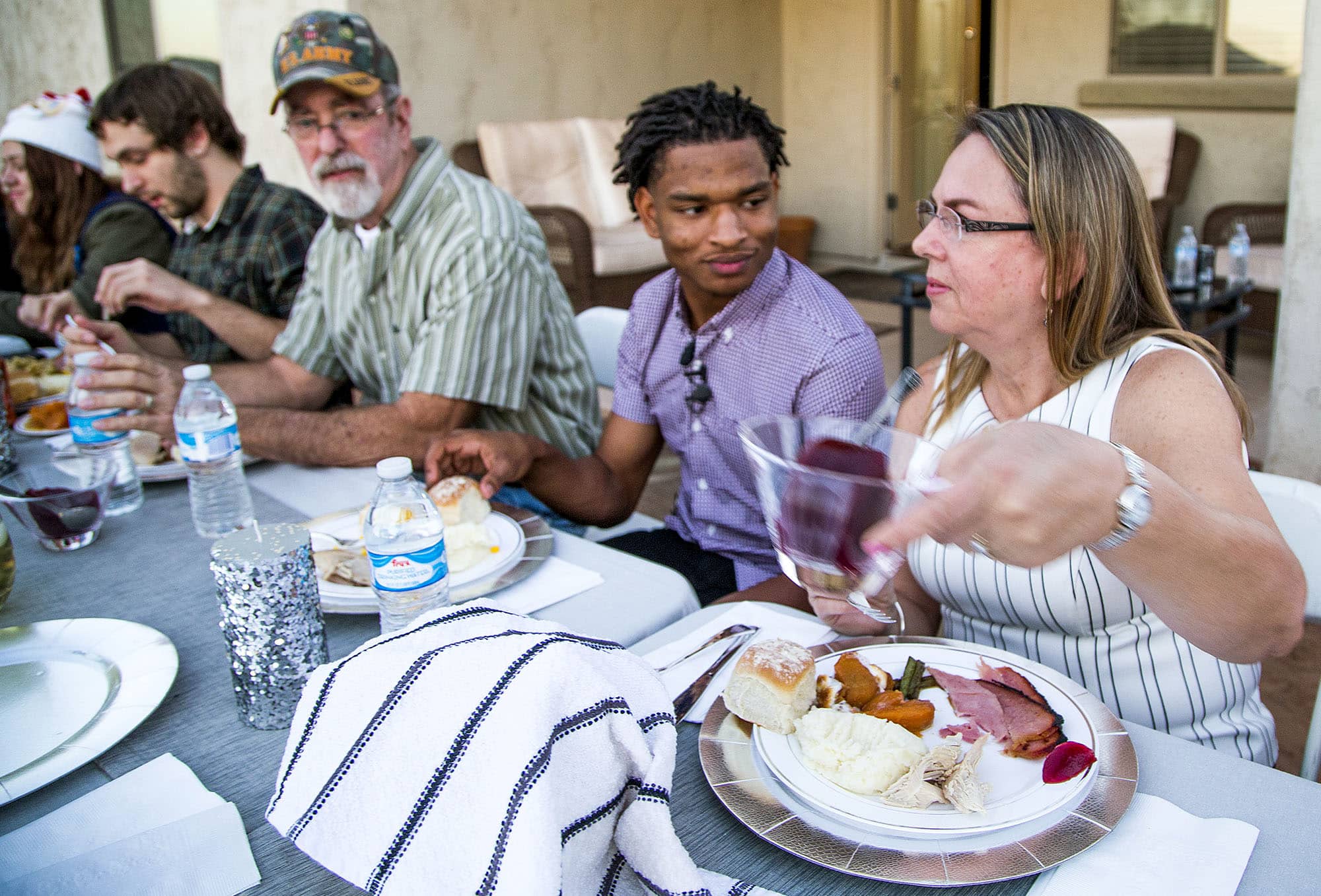 The best part of every holiday is time with family and friends. The second best? It’s the pie, of course. Jamal did his part with both in 2017, bringing pumpkin pie and lots of laughter to at his new grandmother’s house. A lesson for everyone this holiday season!