People Were Calling This Man Crazy When He Bought An Old School Bus, But Everybody Is Stunned With The Masterpiece After He Executed His Plans

When most people picture their dream house, the image that most likely comes to mind is a reclusive mansion with a decked out pool and a dazzling patio. However, not all of us have the kind of spending money to make that dream a reality. Well, when one man living in Texas was given the opportunity to create his dream home, his vision was much more different than the average person’s. Everyone called him crazy until he showed up with a home so beautiful no one could believe their eyes. 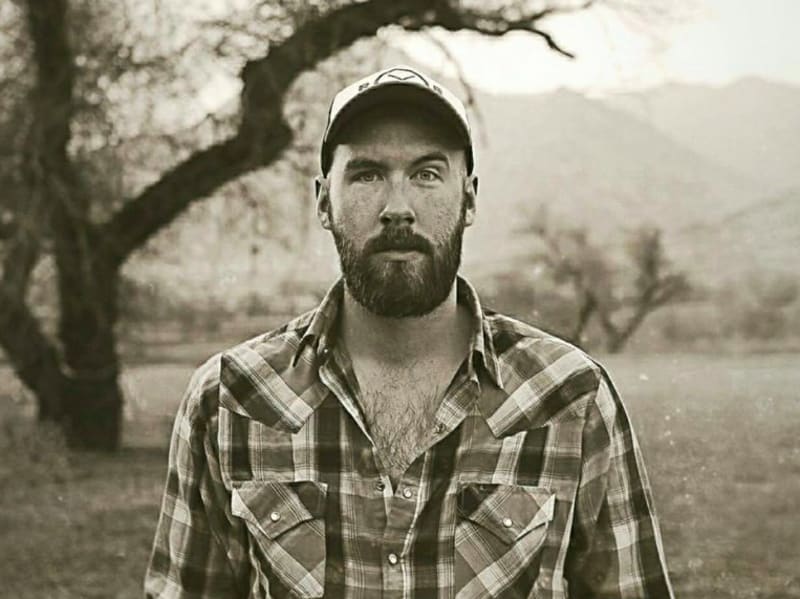 Michael Talley is an illustrator and graphic designer from Austin, Texas. Recently, Talley had been coming up with ideas of building his dream home from pre-existing materials. Finally, in 2016, he was given the opportunity to do so and he was excited! 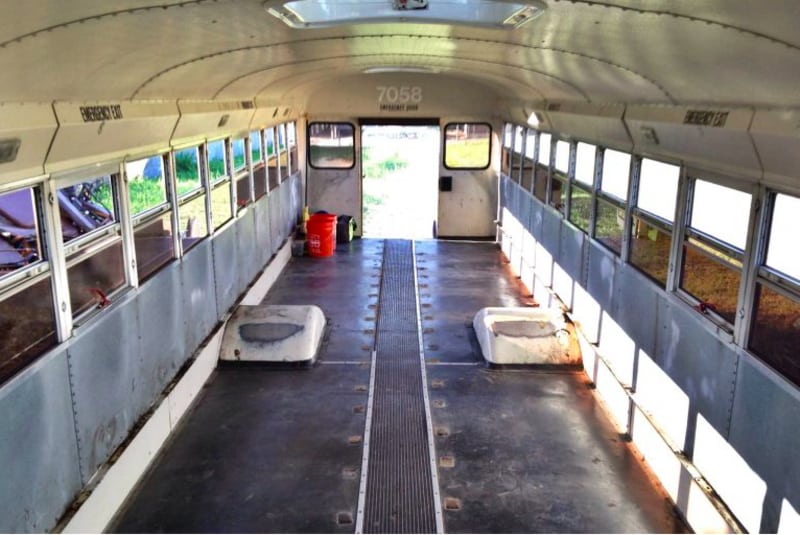 Talley started off his dream project by purchasing an old school bus for $2,200. The bus was listed for sale by the Austin Independent School District and Talley won it during an auction. However, in order to get the bus ready for his project, Talley had to completely strip the bus of its seats. 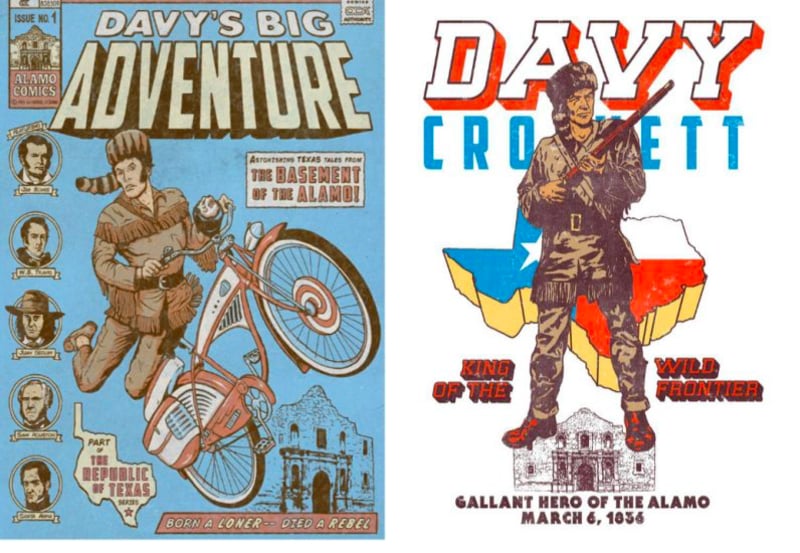 Although Talley is not a natural-born handyman, he is quite the expert when it comes to designing things. Talley actually happens to be an artist that has designed art for comic books, event posters, signs, and even political cartoons. His original inspiration for the bus came from an old Davy Crockett comic. 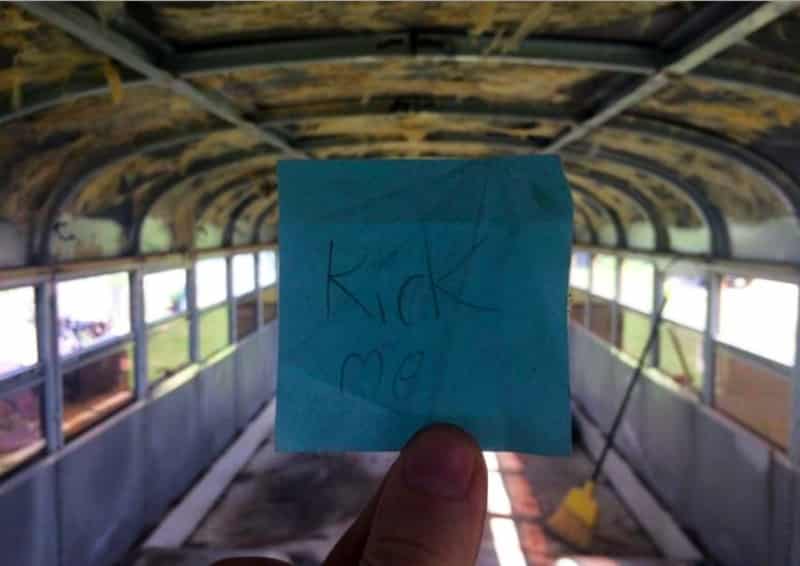 So Talley started with the first step of the transformation process which required him to strip the bus of the seats. At this point, he wasn’t exactly sure which direction he was going to go with the transformation. However, he knew that he would need to start the work regardless.

16. Drawing Up The Space

Talley began to draw up how he imagined each space of the bus would look. He designed a kitchen, bathroom, living/work space, and a bedroom. He also made sure to keep the bathroom and the kitchen closet closer to the front of the bus that way they could be easily accessible during an outdoor BBQ session! 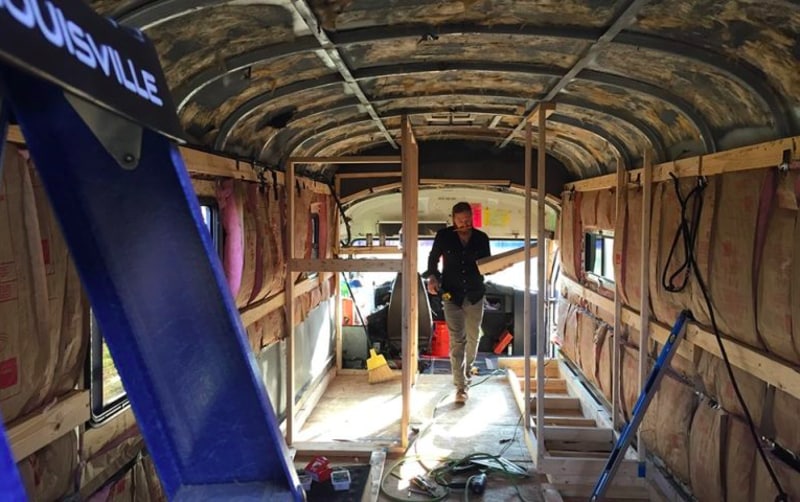 However, Talley completely underestimated the fact that the bus wouldn’t be quite so spacious for a 6″6 man. Talley soon realized that in order to comfortably house him, he would have to lift the roof of the bus. So that’s exactly what he did…with some help. 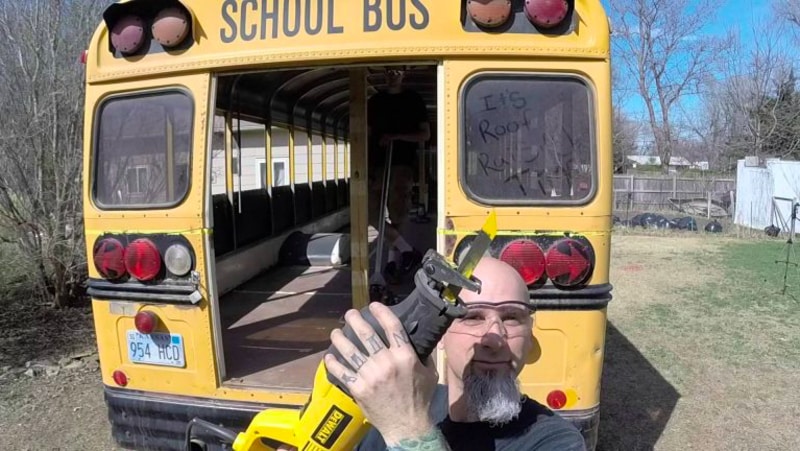 Luckily Talley didn’t have to undertake the task of lifting the roof all on his own. He had some help from his stepdad, a few of his friends, and some strangers that passed by actually offered to help out as well. Talley was overwhelmed by everyone’s support and kindness. 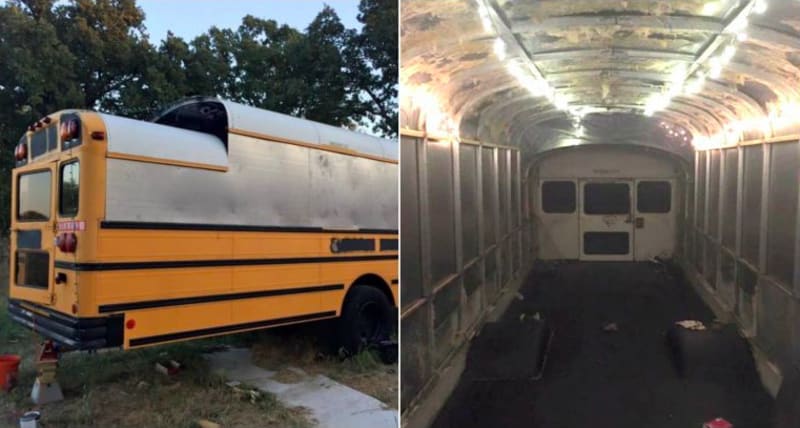 In order to actually complete his project, the entire bus had to be completely renovated. The roof was lifted, the windows were removed, they added some extra insulation, and the back was also expanded. The renovation was far more extensive than Talley had originally planned for and it was really starting to cost him. 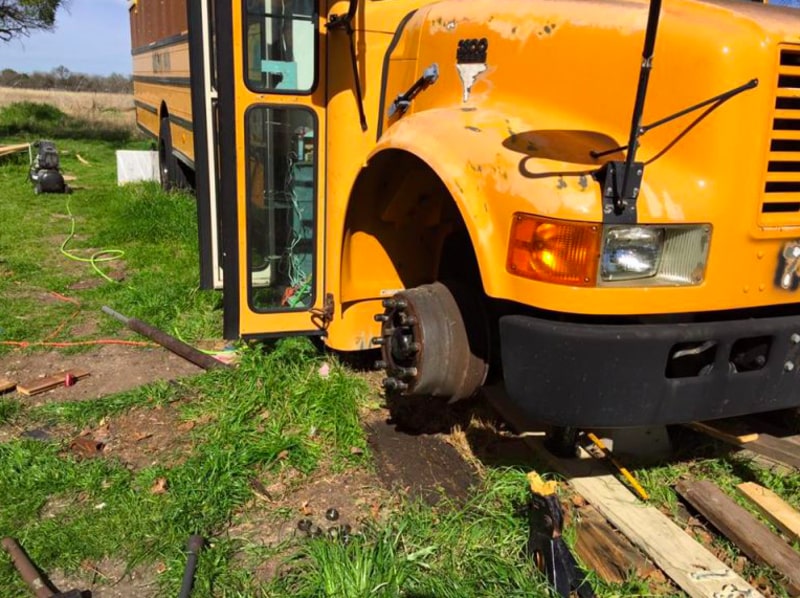 Talley had wanted to purchase a bus so that he could have a mobile home, however, the bus was in need of more work than he thought. In fact, the reason why it was being sold for so cheap at an auction was because the engine and steering power on the bus all needed to be fixed up or changed. “Changing a tire on this thing was more expensive and less fun than I had thought it would be,” he said. 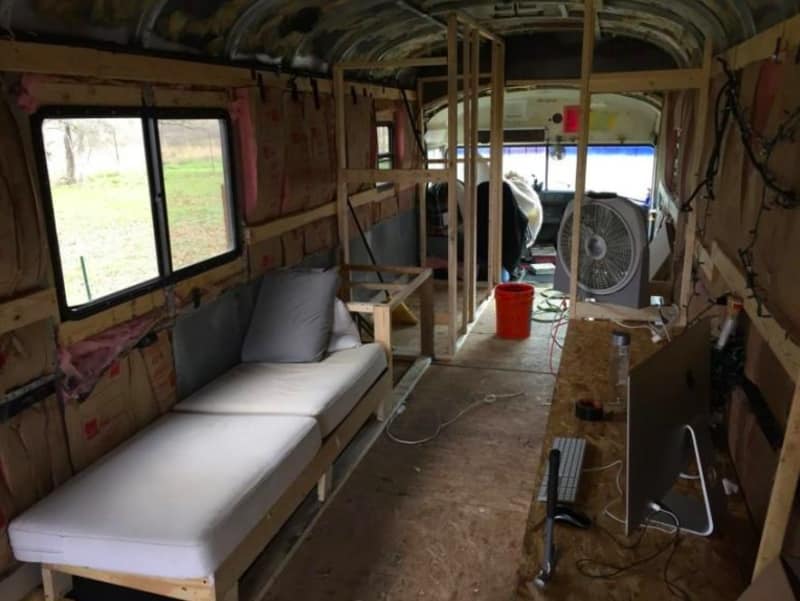 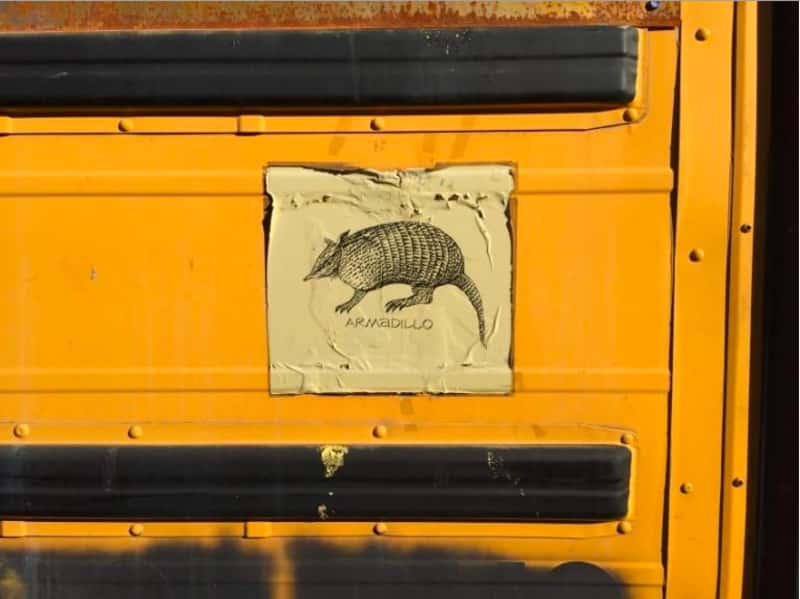 One of the main reasons behind Talley’s purchase was a trip down memory lane. When Talley was a young kid he used to ride an Armadillo bus just like the one he purchased. It seems that a fondness of his past greatly influenced his decision to spruce up a school bus! However, it was much harder than he had expected in more ways than one… 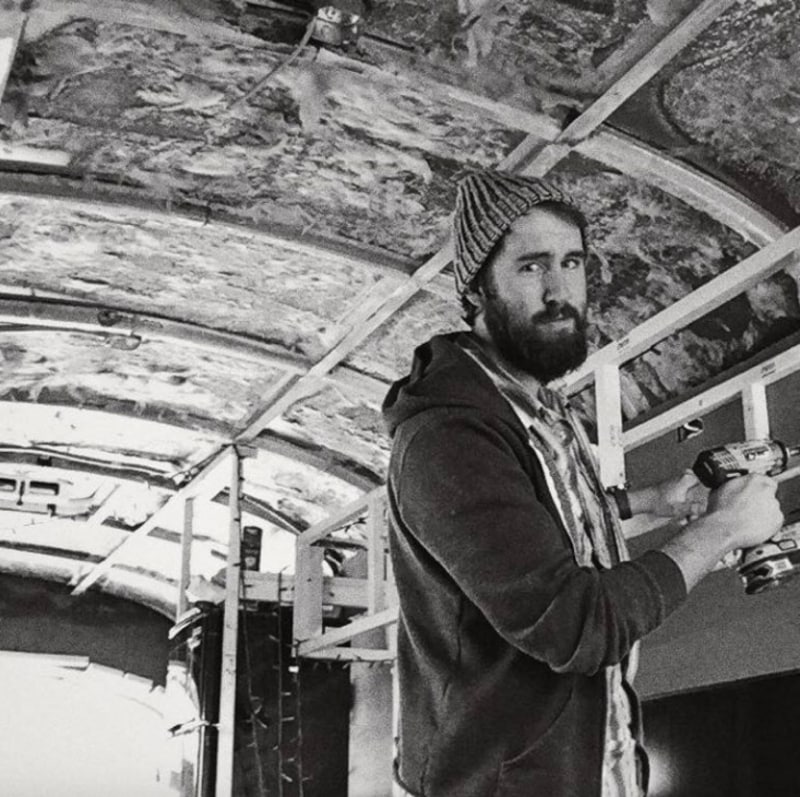 You see, Talley underwent a lot of struggle that year not just with rebuilding the school bus but in his personal life as well. In that year, Talley lost his job, ended a relationship with his girlfriend, and also lost his grandfather. Although it was a rough year, Talley refused to give up on his dream home. 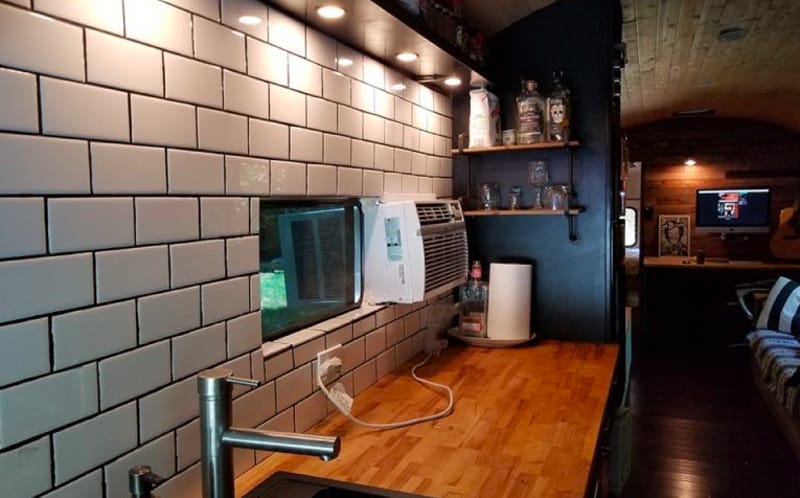 The first area of the school bus that Talley was able to complete was the kitchen. Talley was amazed at how everything had come together. He chose beautiful white subway tiles with black grout and installed all of the appliances himself. Next, you won’t believe how comfy the bedroom looks! 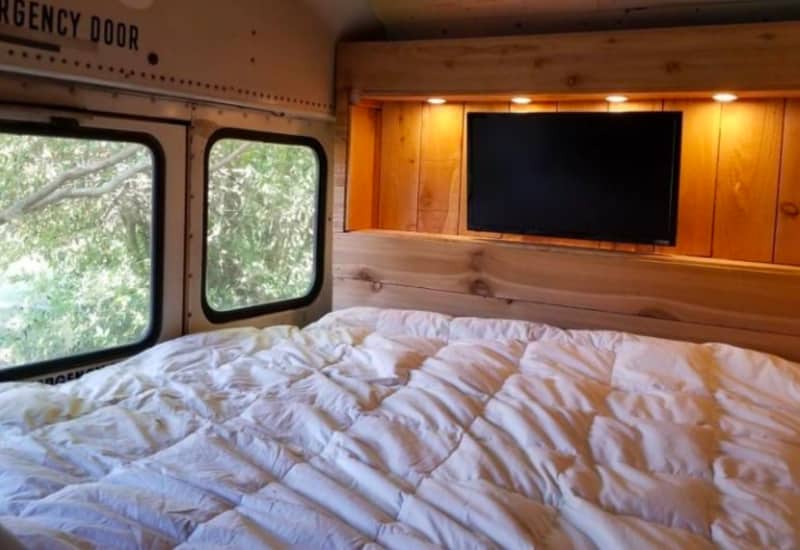 Talley was determined to create an incredibly lush and comfortable bedroom setting. The bedroom is complete with a comfortable bed and a television set. He also has an amazing view out of the back of the bus windows when he wakes up in the morning. 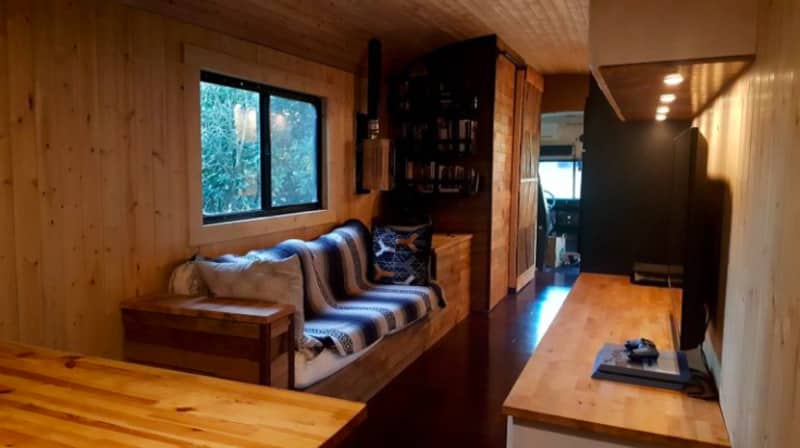 The living room is another area of the bus that Talley was quite pleased with. He crafted together a comfy couch, a television area, and a Playstation for some game time. He also installed both an air conditioner and a heater inside of the bus as well. 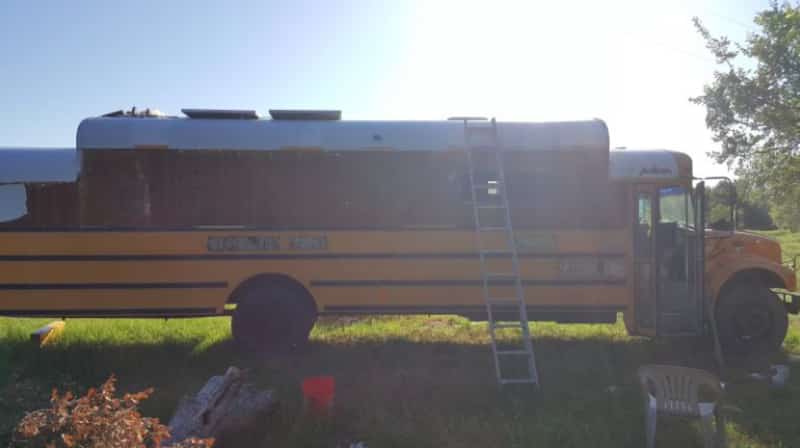 Finally, now that the school bus was pulled together all Talley had to do was install some final touches. The bus still needed gas, water, and electricity. So Talley installed a few tanks and generators and added some solar panels to the roof of the bus. 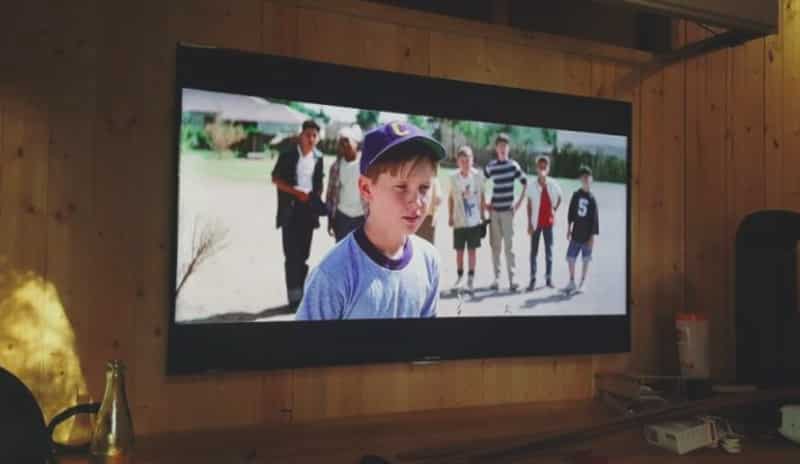 Most of the power that Talley’s bus generates is used to keep his TV running. He loves having Netflix marathons whenever he settles down somewhere for the night. Finally, it was time for Talley to do the last final touch.

Finally, although Talley appreciated the yellow color of the school bus as it reminded him of his childhood, he knew he wanted to do something different. Talley decided that he would paint the exterior of the bus white. He hopes to eventually add some more color to the bus in the future. 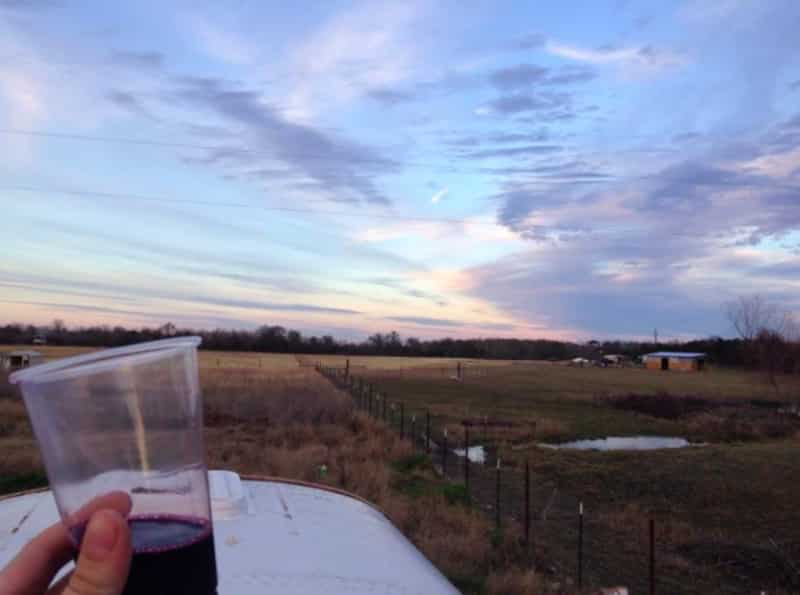 Now that the bus is completed, one of Talley’s new favorite things to do is sit up on the roof. He’ll often bring a drink up with him when he’s parked for the evening and enjoy the view. These days, Talley feels like he’s on top of the world! 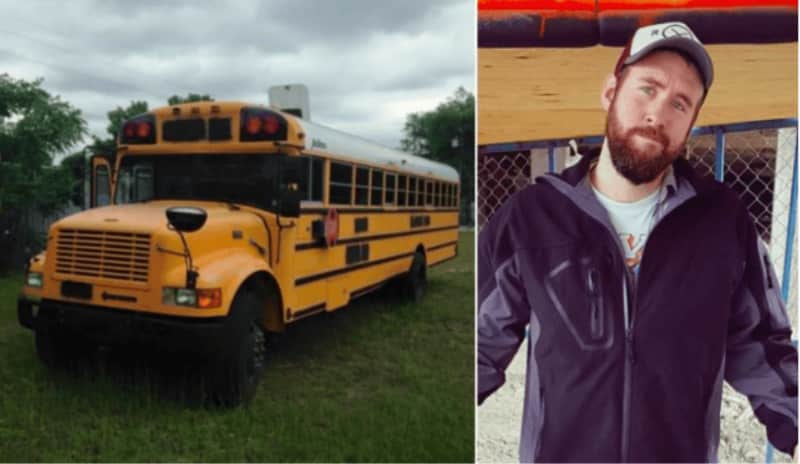 These days, Michael Talley has been enjoying his new mobile home all while feeling grateful to have been able to complete it. He also started a new job creating art for an organization called USA Military Medals. Although everyone thought he was nuts for attempting to renovate a school bus, Michael swears that it’s the best decision he’s ever made.