Somewhere deep in Indonesia is a man who has become best friends with a Tiger. However, their friendship didn’t always start out so great. It took one amazing trick to get this tiger to become this man’s friend and trusted companion. Find out how he managed to become an inseparable pair with Mulan the tiger. 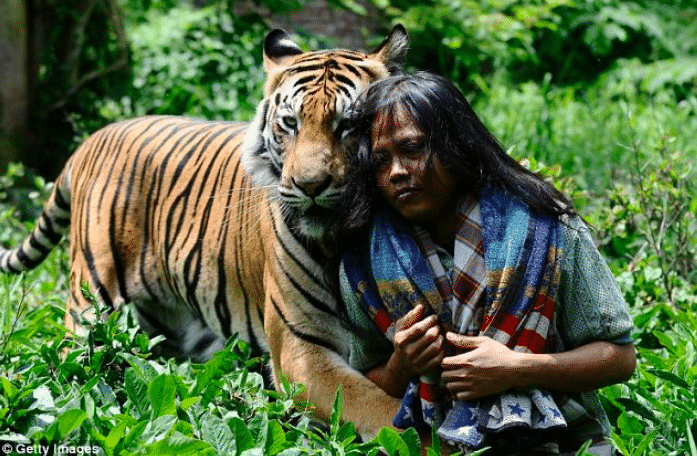 Mulan Jamillah is a gorgeous Bengal tigress. She was donated to the Islamic school in Malang, Indonesia, when she was just 3-months-old. At first, Mulan was watched by a particular caretaker… 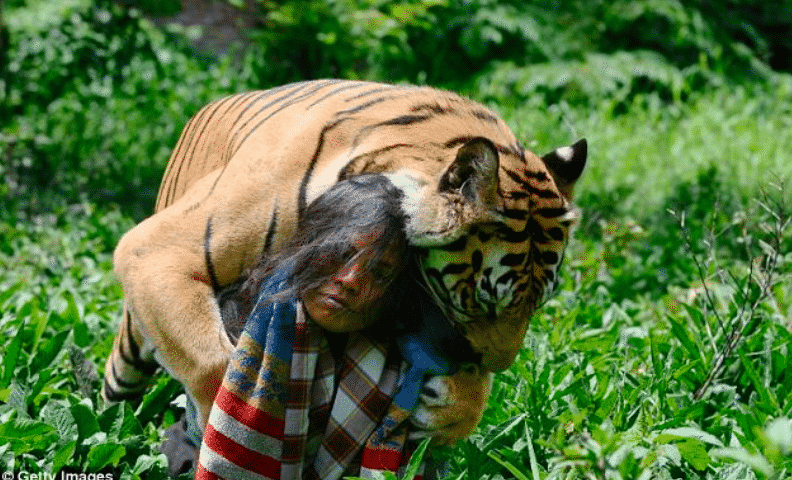 At first, Mulan was being watched over by a female caretaker who made sure that she was comfortable in her surroundings. However, all of that quickly changed when the caretaker could no longer look after her. That was when one man volunteered. 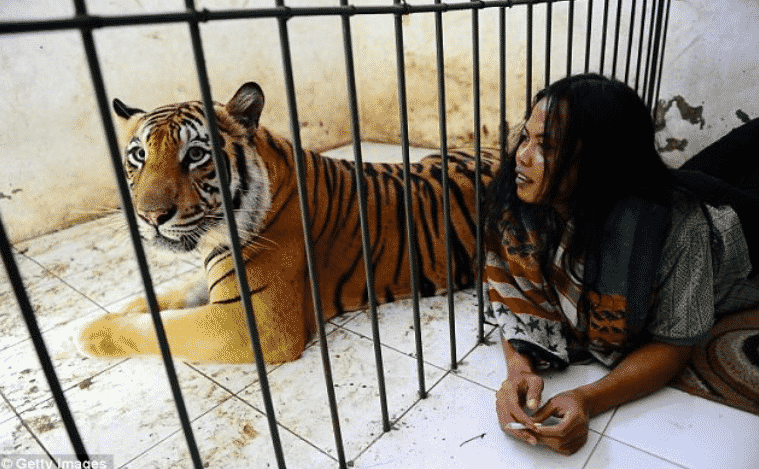 25-year-old Abdullah Sholeh is an Islamic student at the school. When he heard that Mulan was in need of a new caretaker the young man quickly volunteered his services. He was excited to get to know the young tigress. 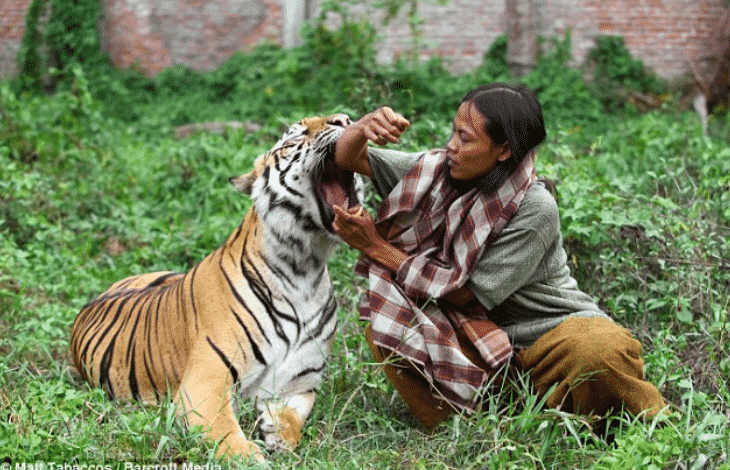 At first, Abdullah saw the position as a temporary job that he would undertake in between studying for his exams. However, soon it turned into a full-time nannying position. But, these two didn’t get along that well from the beginning. 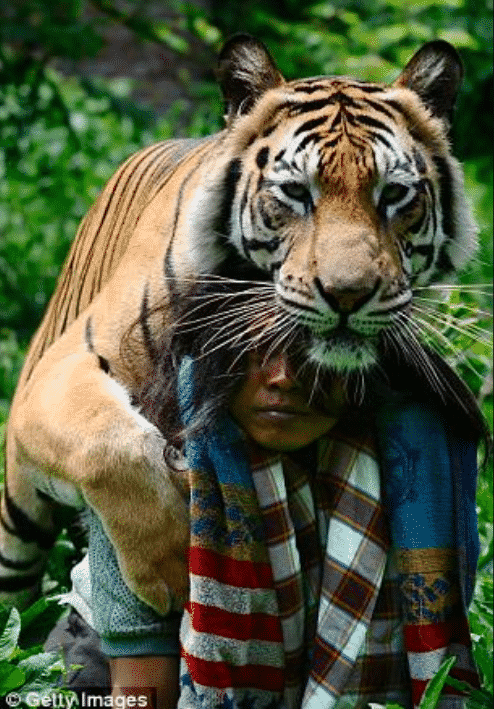 Abdullah understood that taking care of Mulan was a risk. She is, after all, a tigress and is capable of hurting him pretty easily. Abdullah decided that he would get to know Mulan in order to avoid any problems. 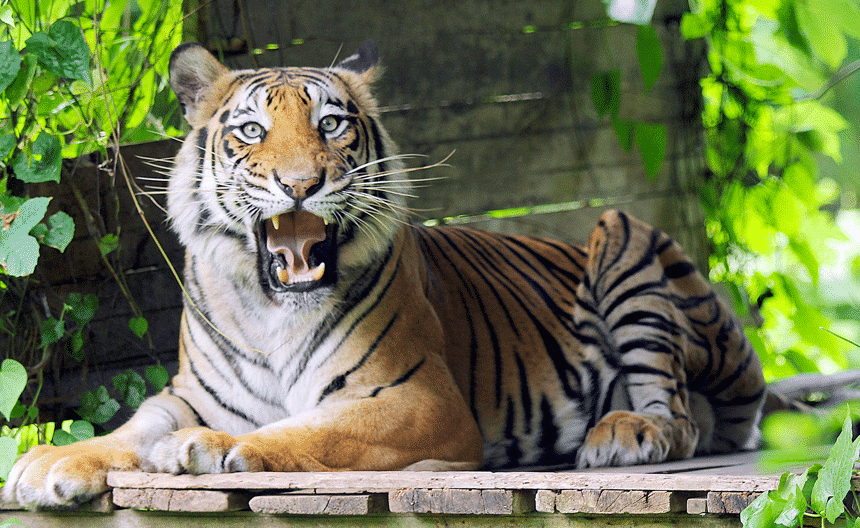 “I realize that she is an animal who has her own instinct, she is just like a cat. When she is playing she can scratch and bite, and those are just a few of the risks that I have to face,” Abdullah explained. “That’s why we have to learn about her character.” 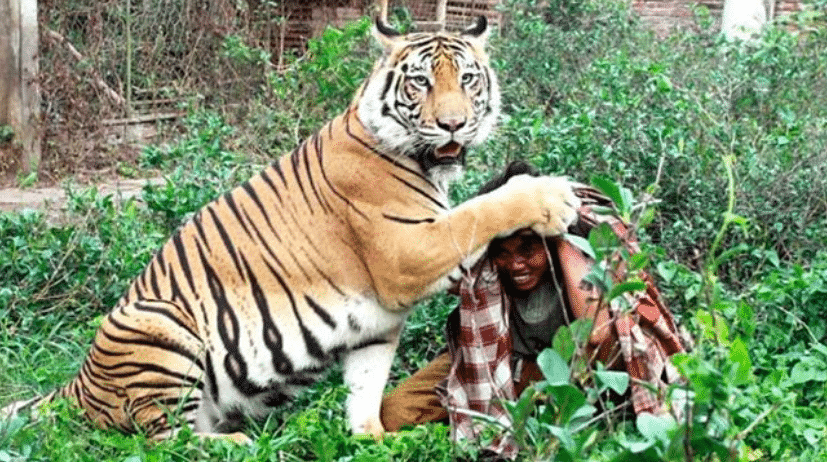 One day, Abdullah was going into the enclosure where Mulan would stay. He was playing around with Mulan when things quickly took a turn for the serious. Abdullah did not expect what happened next. 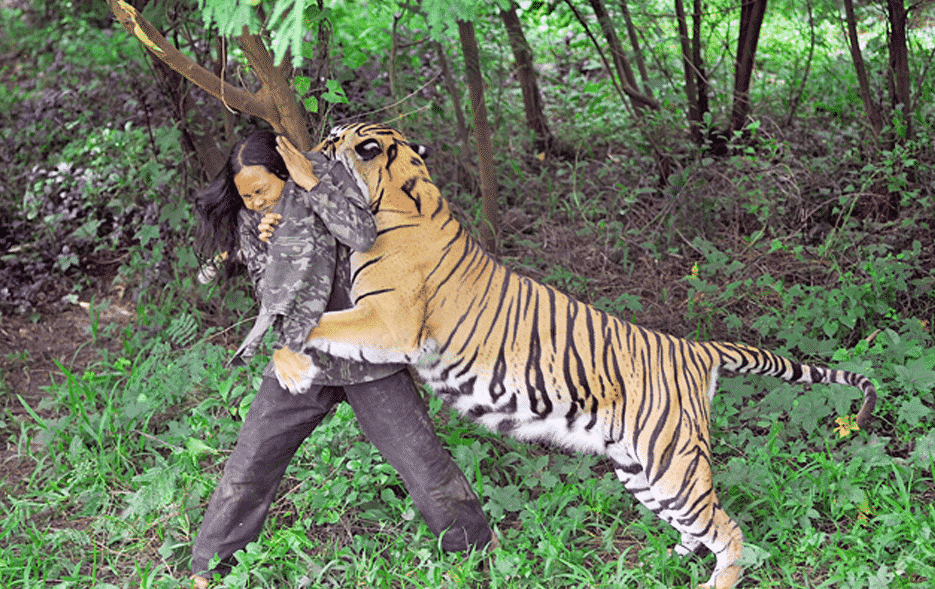 The playing soon turned into a real-life attack when Mulan swiped her paw across Abdullah’s face. He was shocked and stunned and couldn’t believe what had just happened. He knew this was a risk… 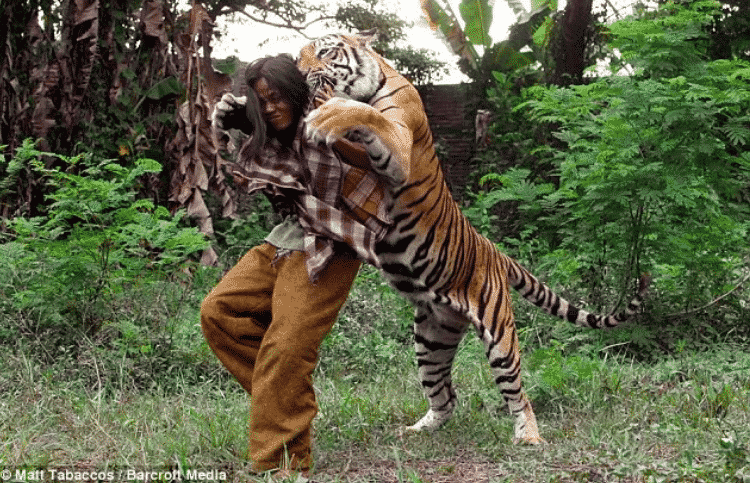 “I was lucky, Mulan’s claws nearly took my eye out,” he said while pointing to the scratch on his face from that day. However, Abdullah has found a way to keep Mulan happy that not many people would ever try… 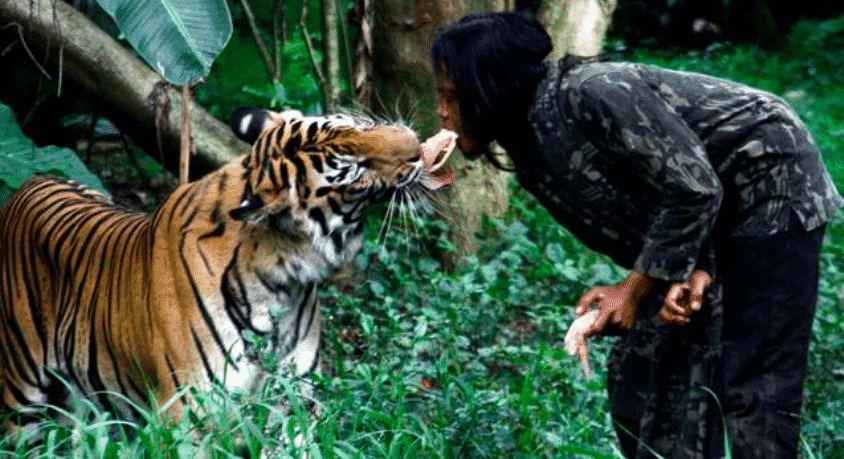 To win her over, Abdullah feeds Mulan about 6 kg of chicken or goat meat a day. He doesn’t do it in a typical manner either. You’ll be shocked at the feeding ritual shared between these two. 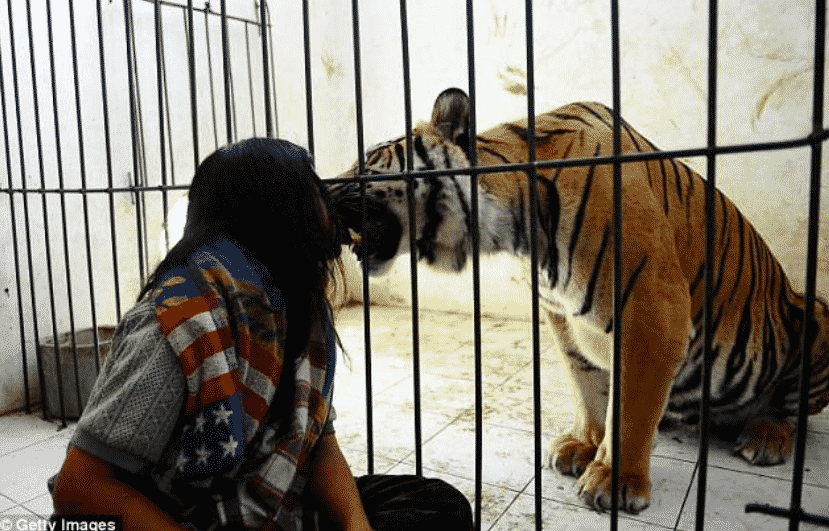 While many people would be satisfied with simply throwing the meat over to the tigress, Abdullah has an entirely different method. He often feeds Mulan meat right from his mouth. This ritual helps to solidify the bond between the two of them. 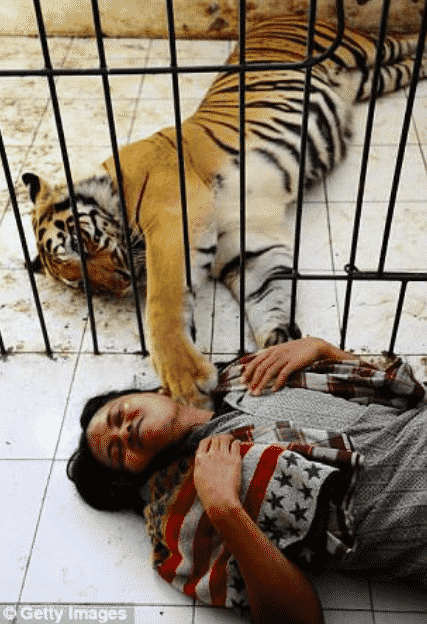 These days, the pair are totally inseparable. Abdullah often chooses to sleep with Mulan over sleeping in his own bed. The friendship has been going strong for over 10 years. 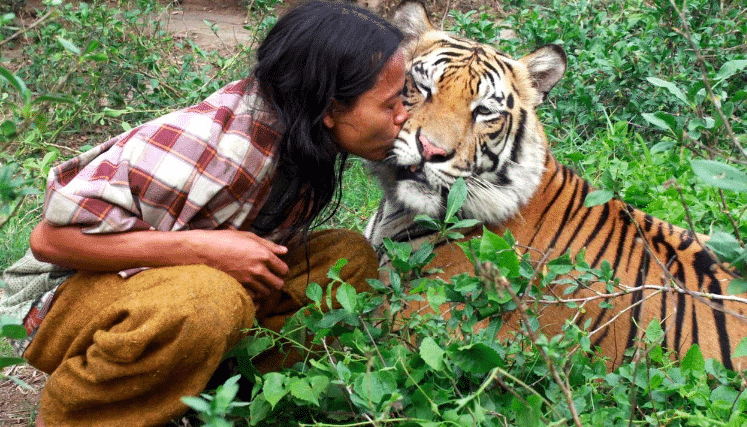 “If I am not home Mulan will be trying to find me, she will be anxious,” Abdullah told Barcroft TV. “That is why I am always with her to play, to sleep and to feed her, that is how I spend my days.” 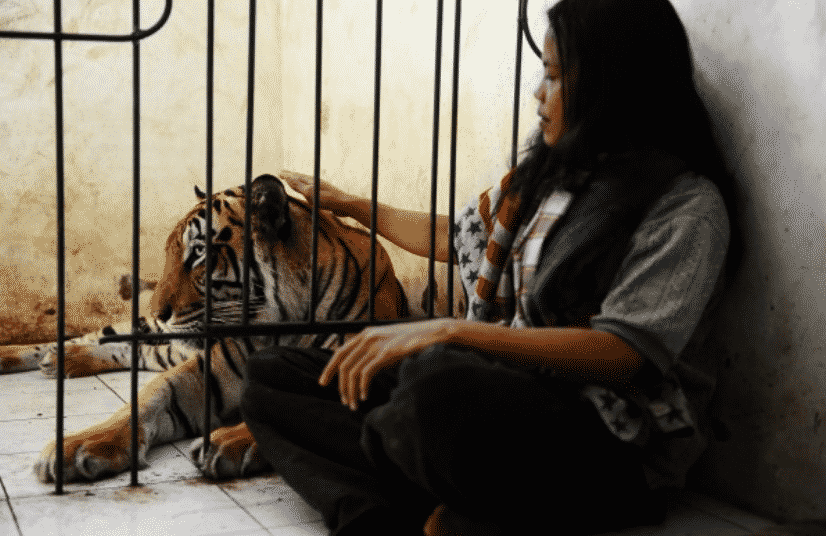 Nowadays, Mulan shows her true affections for Abdullah in the sweetest ways. Although the pair play together a lot she also shows her sweet side. You won’t believe what she does… 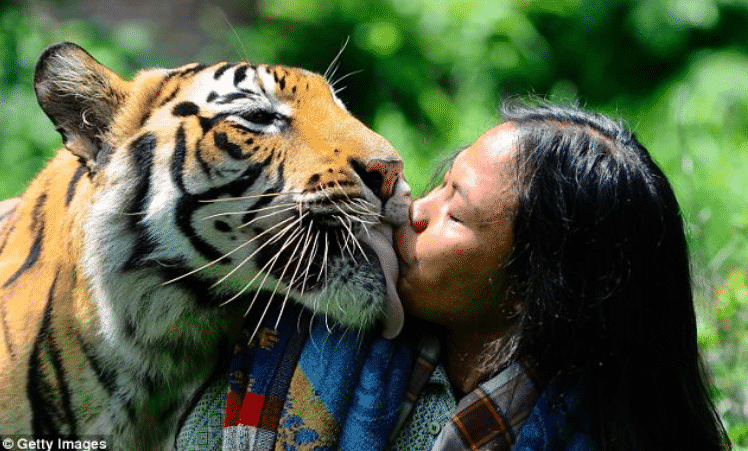 Whenever Mulan sees Abdullah she runs over to him and plants a sloppy kiss right on his face. Abdullah doesn’t mind at all. He loves to receive her kisses and showers her back with love! 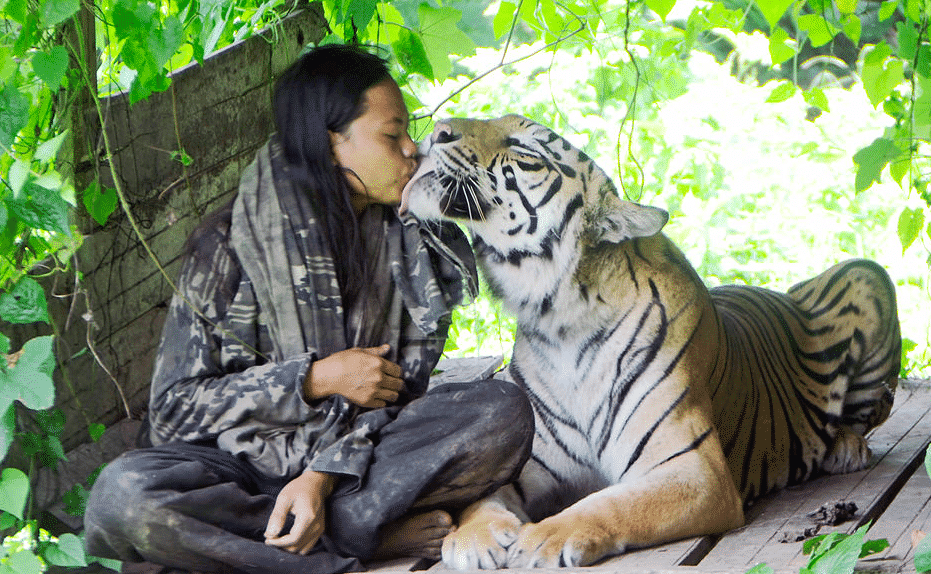 “Mulan is a spoiled tiger she is exactly like a best friend. She always plays with me and eats what I eat. She likes to try a bit of my food, if she doesn’t like it she will leave it, but if she likes it she will finish my food,” Abdullah says. 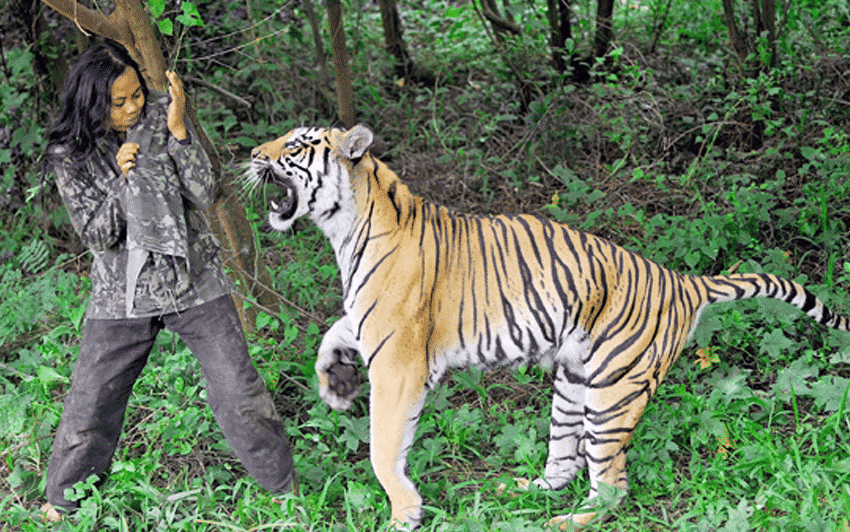 Although Abdullah has many scars from his interactions with Mulan he doesn’t let it deter his friendship with her at all. He understands that she is a wild animal and that he must always exercise caution around her. 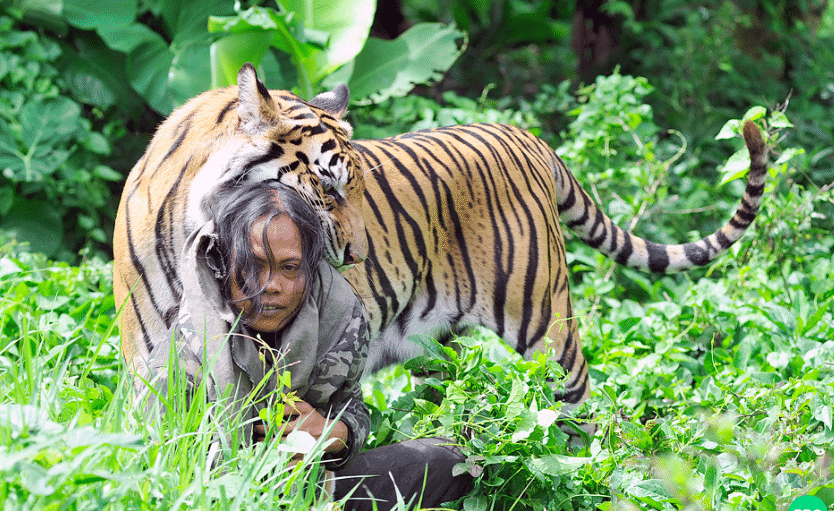 “Having a bit of a scar from her doesn’t mean anything to me, getting a scratch or even a bite from her is a common thing,” Abdullah told Barcroft TV. Abdullah even wears a thick cloth around his neck because Mulan loves to play with it. It’s very dangerous since Mulan could easily cut him there. 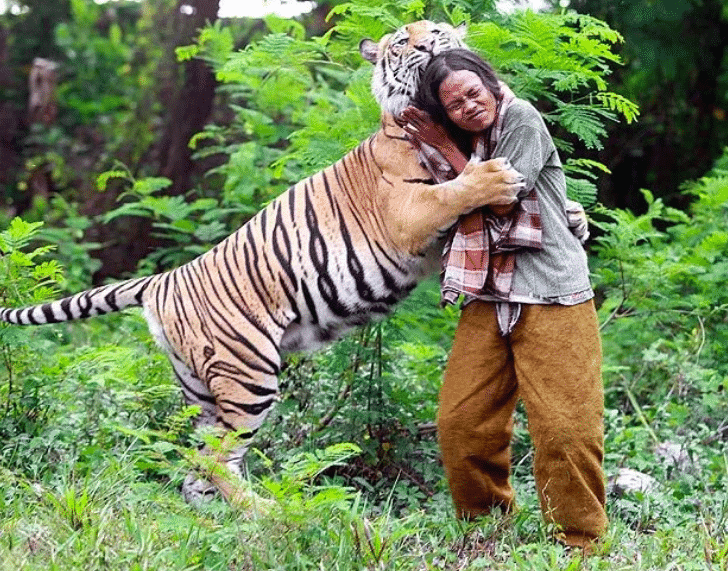 It is an honest and true friendship shared between Mulan and Abdullah. Although there has been some rough patches along the way, Abdullah has remained strong. He has refused to stop being friends with her. 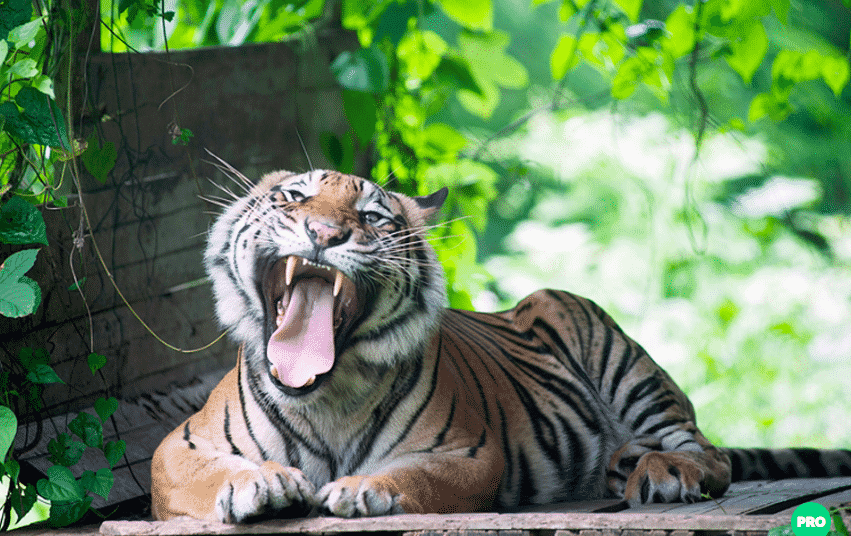 The unique friendship shared between animal and man will forever intrigue all of us. It is amazing to see such a wild animal interact with his caretaker in such an amazing way.