Having those talons and fantastic eyesight, owls are very skilled when it comes to hunting critters in the wild. Add the precise hearing and amazingly swiveling heads and you have a killing machine. Of course, Jordi Amenós Basora, who is a Spanish falconer, knew all about owls and other birds. But one day, he and his pet owl went on a hunt in the woods and a different kind of pet followed them outside.

At first, he was very nervous, not knowing what will happen. But he surely wasn’t expecting this… 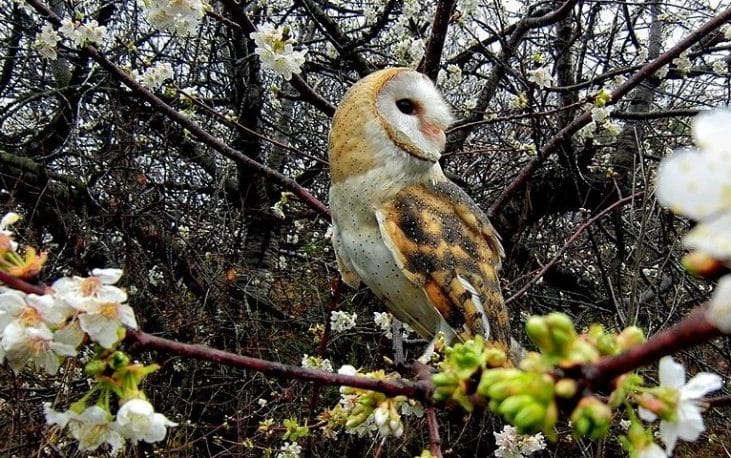 Jordi loved to train barn owls. He taught them to fly, hunt and return to him and the amazing flights usually drew attention to a big crowd. But this owl was particularly impressive… 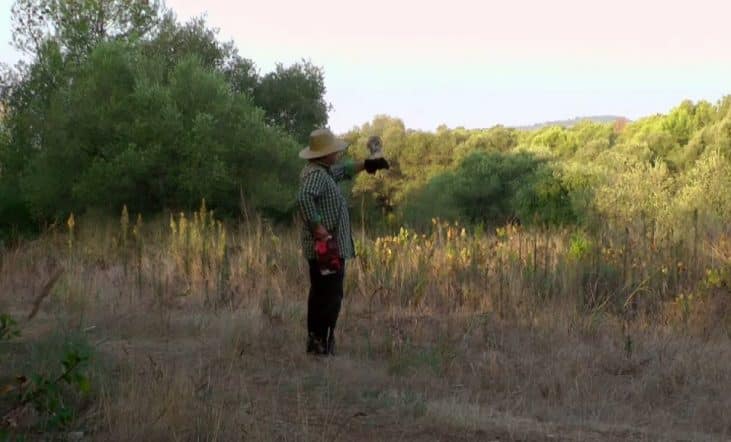 This beautiful barn owl has been grown since she was a little owlet by Jordi. She wasn’t used to meeting many people, even though she was raised by one. Gebra loved to stretch her wings and fly into the woods. But one day something amazing happened! 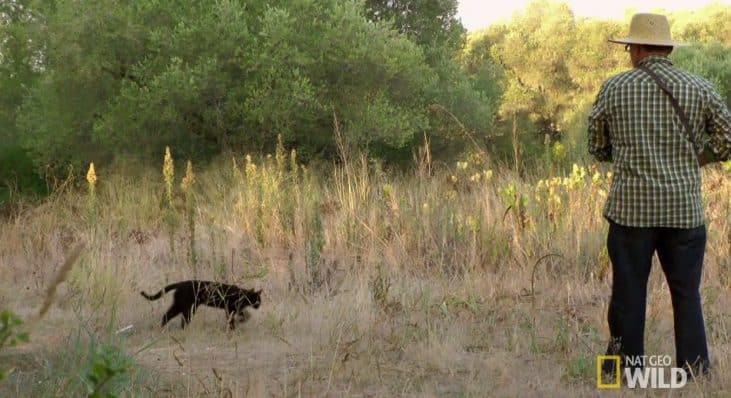 One day, her routine would be interrupted by a special furry guest. When Jordi and Gebra were on one of their journeys, Jordi’s cat followed them into the woods. His name was Fum – pronounced ‘Foom’, which meant ‘smoke’ in Catalan. 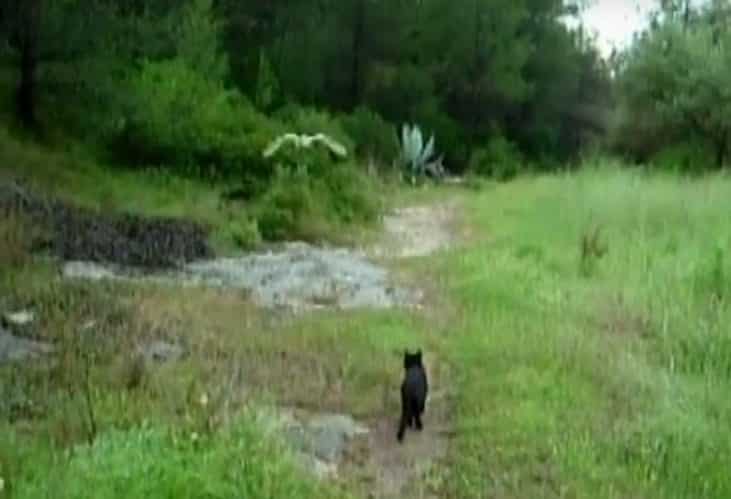 The owner was a bit uneasy because his pets were very much alike: both had claws and both were predators. What would happen when one attacked? Jordi saw Fum and he definitely thought this would be the end of him… 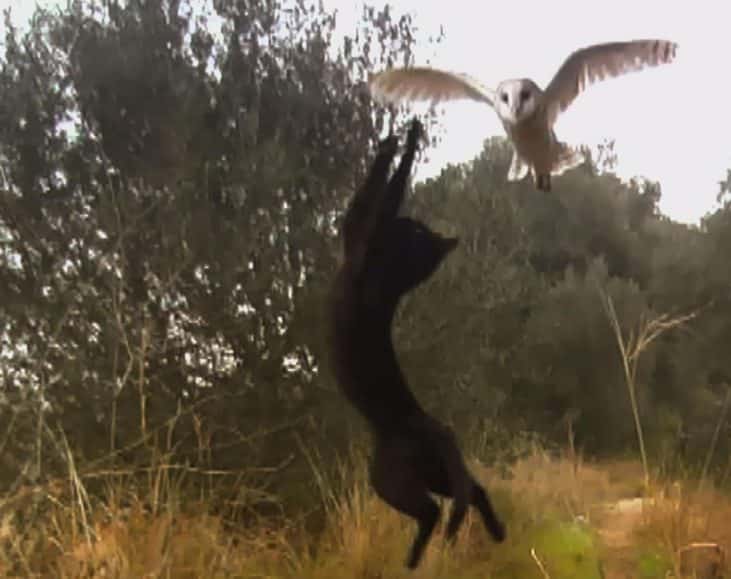 Fum was in the middle of the small dirt alley when Gebra saw him and flew right at the cat, speeding like a hungry predator. But instead of grabbing the cat, Jordi was surprised to see that Gebra had something else in mind! 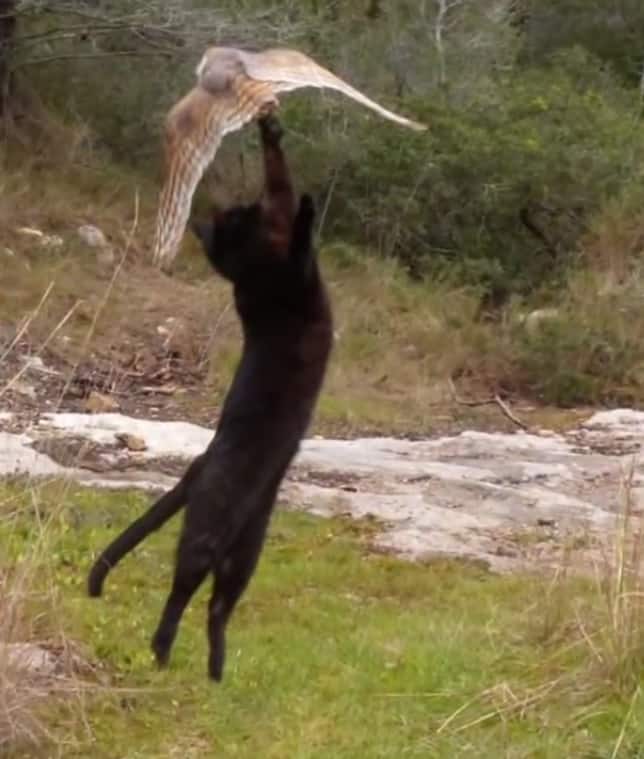 When Gebra approached the cat, Fum playfully jumped to greet and catch the owl. It was all a game for both pets. Jordi was pleased to see that in wilderness Gebra was the same caring owl as she was at home. You see, these pets knew each other. Here’s how everything started… 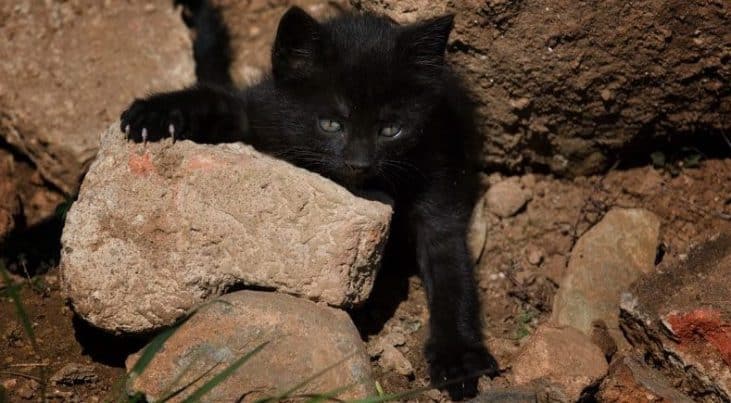 Both pets were babies in 2010 when they first met and they grew up together. Nonetheless, out in the open, both animals could have used their instinct: ‘In the beginning, I was not amused at all by the game’, said Jordi in a Nat Geo Wild interview.

13. An Innocent and Harmless Game 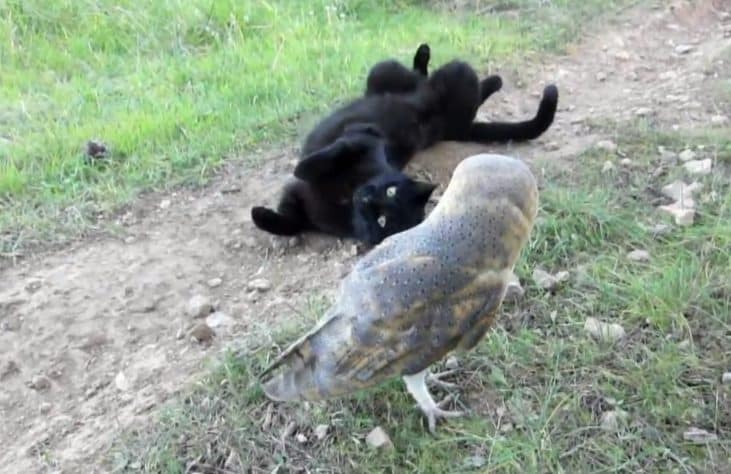 ‘After a few days, I realized that the game was quite harmless and innocent’, said Jordi about the two pets. And he even filmed them while playing in midair or in the trees. It looked like Fum was more of an owl than a cat! You won’t believe how dangerous thir game is… 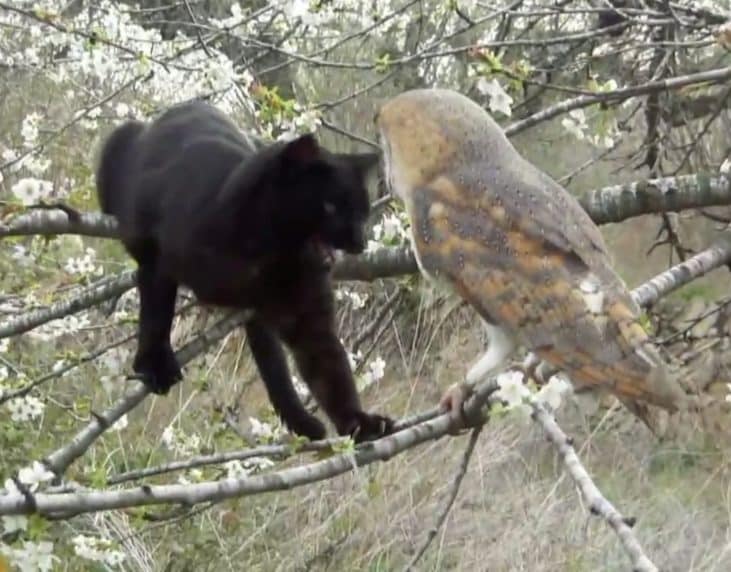 Since Fum’s first journey, he regularly followed Jordi and Gebra in their daily outdoors activity. Both the cat and the owl were having tons of fun, with Fum climbing trees and staying close to his friend owl. But what makes their friendship so special? 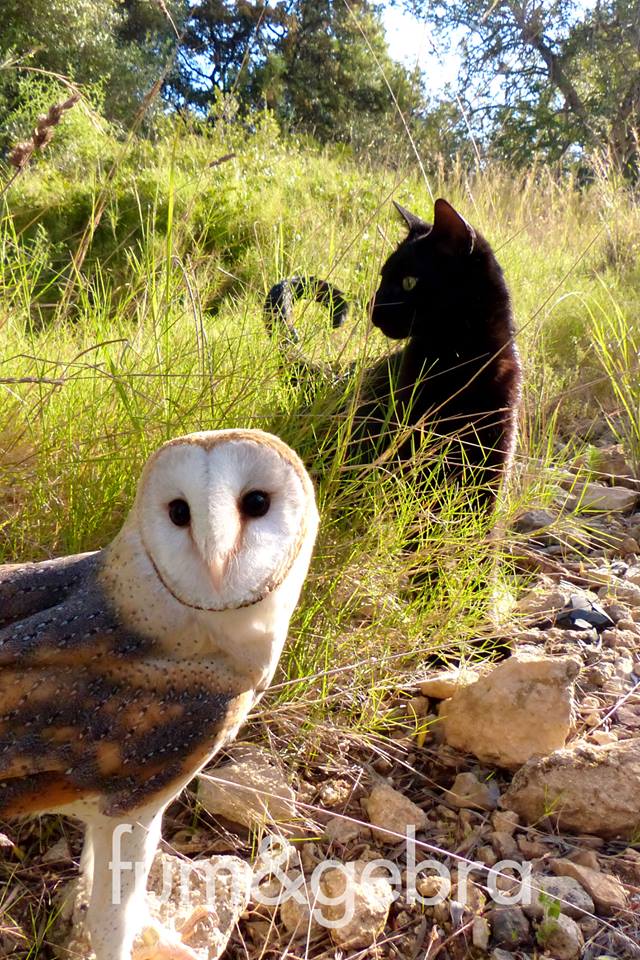 Jordi has never seen a friendship between an owl and a cat. When he’s told people about it, they were also surprised. So, he had an idea… Jordi took his camera on their hikes and captured photos and videos of Fum and Gebra. He then posted them online. What happened after is amazing… 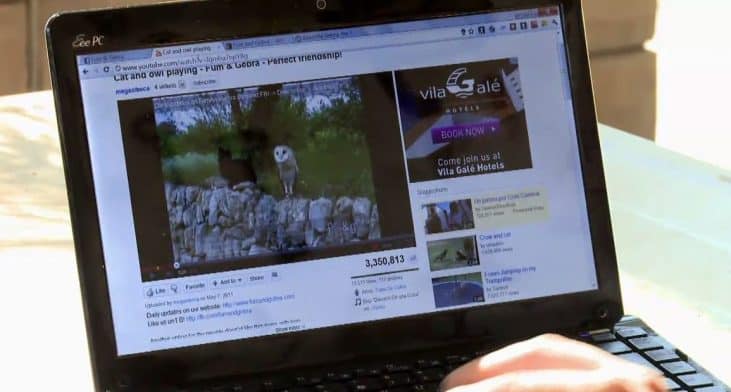 Obviously, these unlikely friends became famous on Facebook, YouTube and National Geographic made a documentary on them. Fum and Gebra were also featured in two books, you’ll be able to see them in the following photos. Everyone was in awe with them. 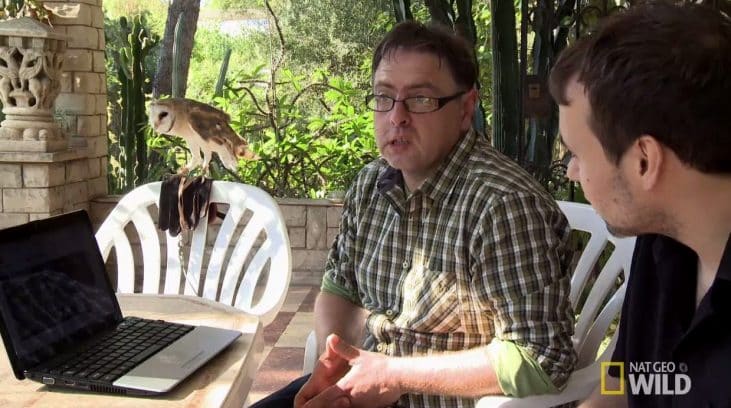 The odd pair gathered thousands of visits on their Facebook clips and Jordi remembers being stunned when he saw how fast his clip went viral: ‘First it had 1,000 visits or something like that, and then I went to sleep. And the next day, there were 300,000 visits’. And that’s not all! 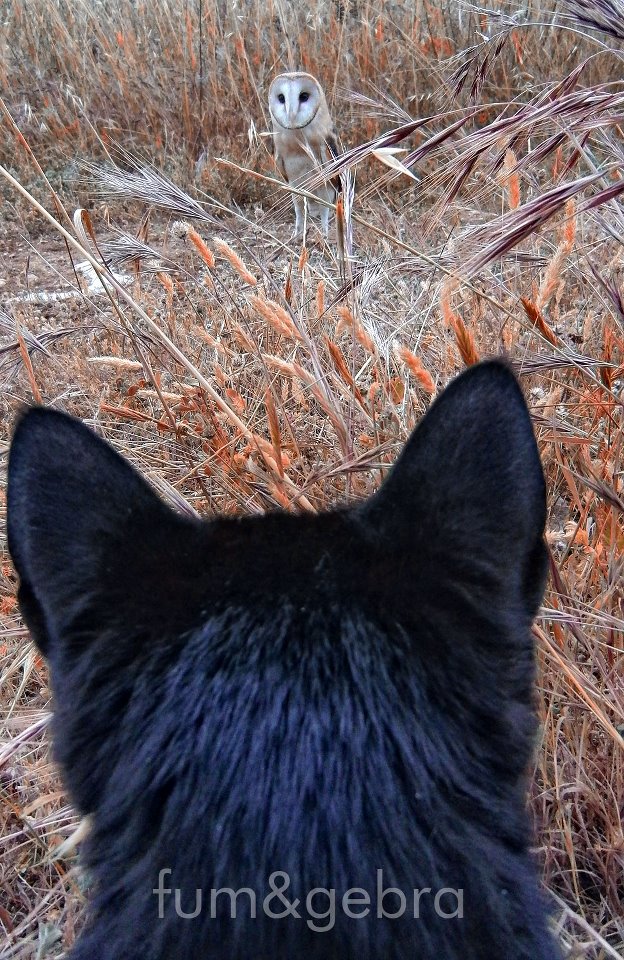 Fum and Gebra were very famous on the internet. But Jordi’s happiness will soon be overshadowed by a terrible news. Fum was only three years old in 2013 when he was diagnosed with feline urologic syndrome (FUS). What happened? 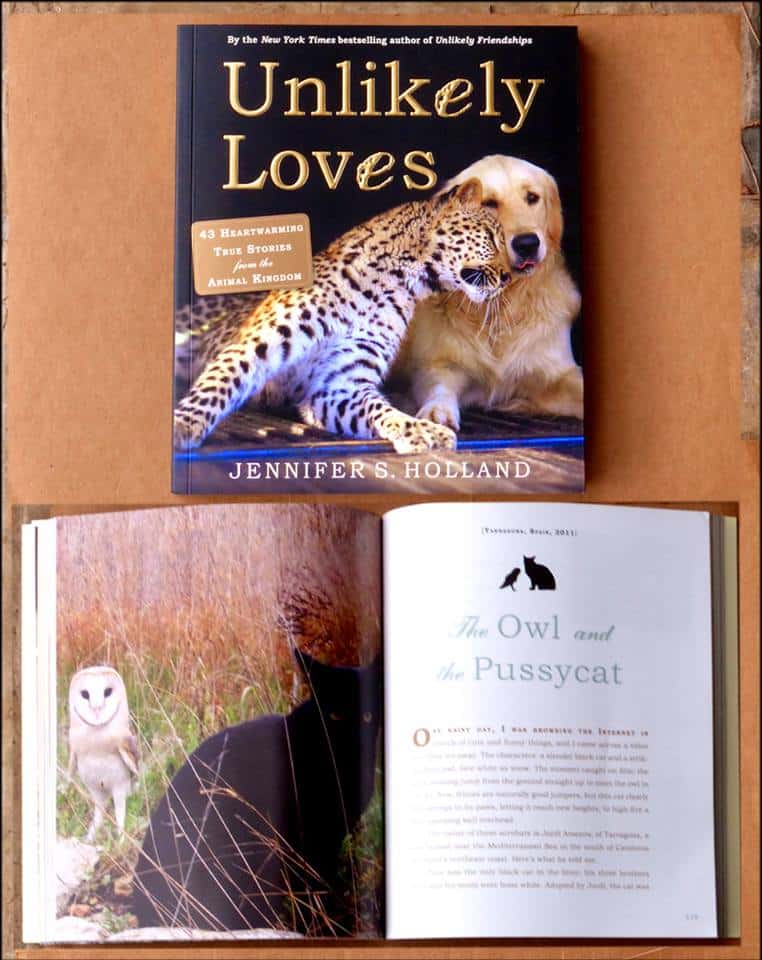 Fum and Gebra appeared in ‘Unlikely Loves’, a book on weird friendships between different species. There’s also a children’s illustrated book with their story. However, Jordi’s heart would soon break…

6. There Was Nothing to Be Done 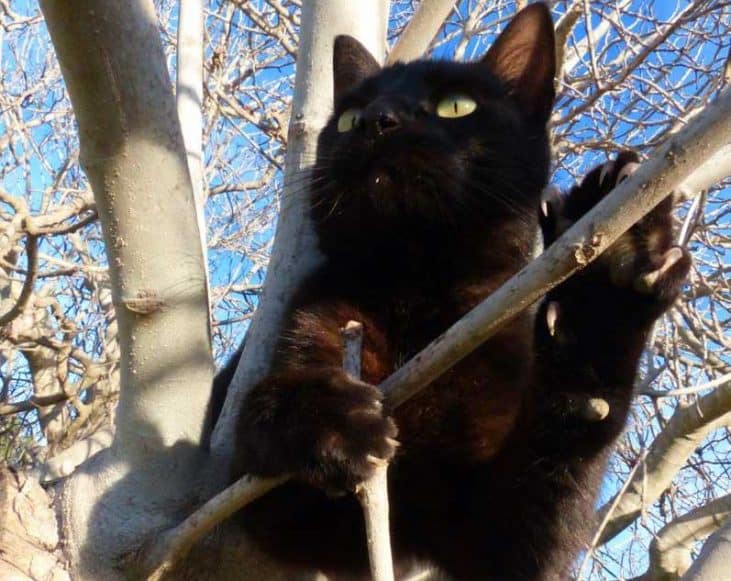 Fum was struggling to stay alive… The disease meant his kidneys were not properly functioning and vets couldn’t save the poor cat. Jordi was very upset when he heard the news and he informed the public that kept an eye on the famous pair.

5. A Quest for Friendship 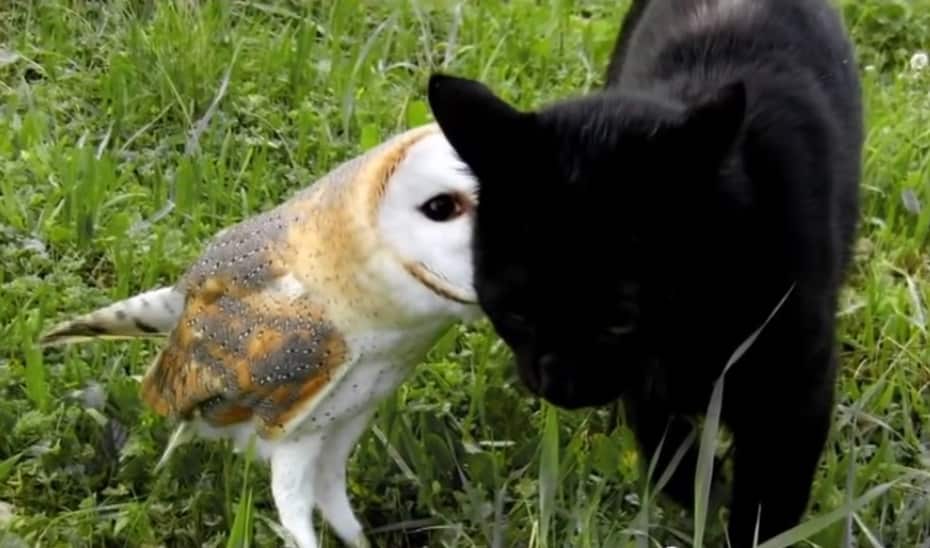 Jordi wrote on Facebook that Fum and Gebra’s ‘message is our most rich legacy. They have been able to show us, humans, that love, and friendship are the most valuable treasures we can [have]’. Later, in 2015 Gia V. Martinez wrote an illustrated story about Fum and Gebra: ‘A Quest for Friendship’.

4. A Tribute to Fum’s Passing 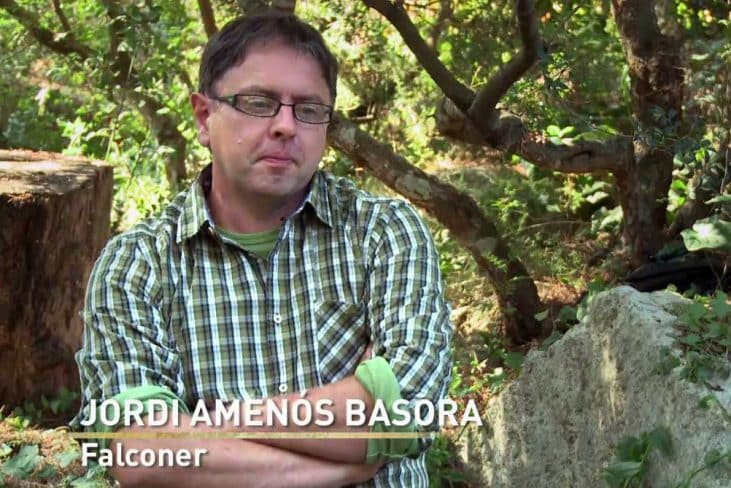 Years after Fum passed, people were still impressed and inspired by his story with Gebra. Children even drew the odd pair in one of their classes. It was a very special friendship and Jordi was lucky to witness it. 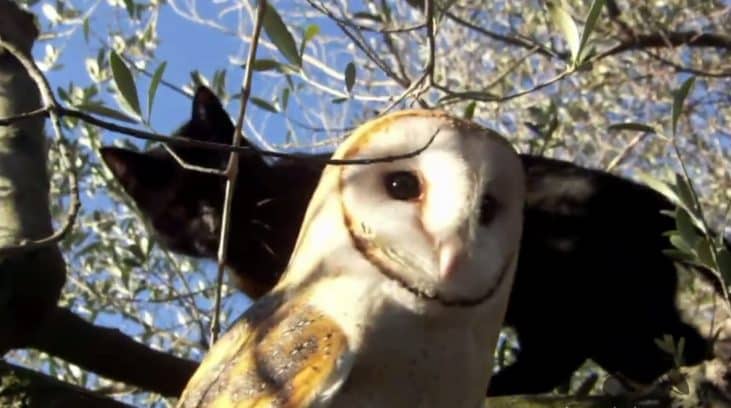 Looking at these goofballs playing is definitely an image that will make you smile. Their message of friendship still stands, even if Fum is no longer around… 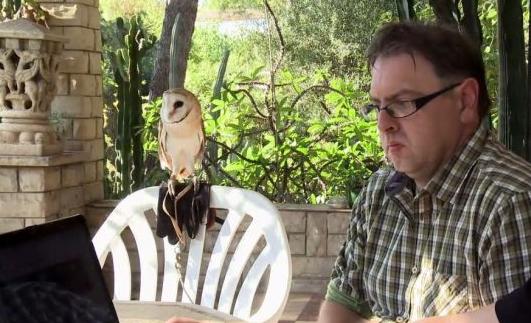 Gebra now has other cat friends that she accepts in memory of her friend Fum. However, no other cat can replace Fum, as they grew together. 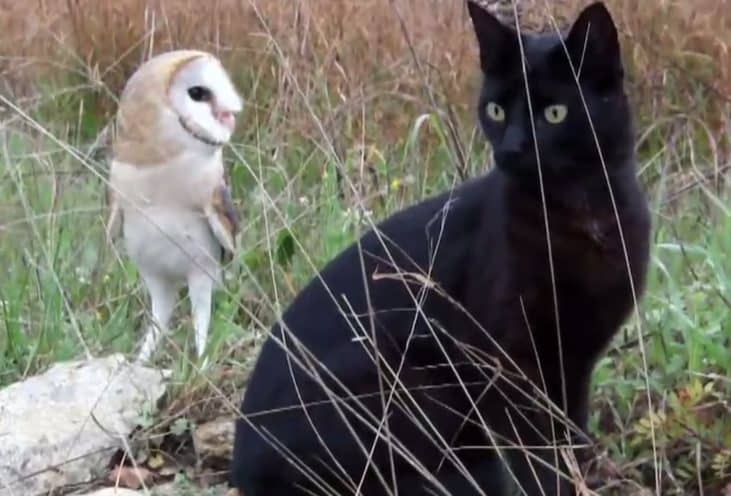 This friendship between an owl and a cat is adorable and sends a powerful message: it doesn’t matter what you are, friendship knows no bounds. Fum and Gebra have taught everyone this lesson and people all over the world have been left in awe seeing their story that was, unfortunately, cut short…