Baby Elephant And His Mother Were Sinking In The Mud, Then This Happened

When tourists and the staff at the Kapani Safari Lodge saw a baby elephant and her mother trapped in a mud grave, they couldn’t stand by and watch them. The poor elephants would have died when the mud would dry and only a miracle could have saved them. It seemed that the baby fell in the mud and her mother went to save her, but she too got trapped.

The people saw those horrific moments and heard the cries of the elephants. They had to act fast! 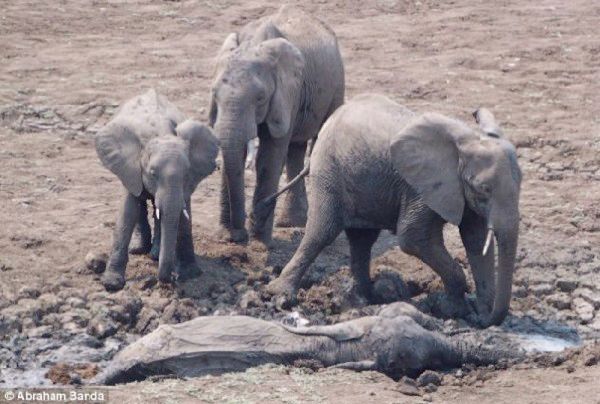 All mothers would do anything for their babies, especially when they get in trouble like this little elephant did. But in this case, both of them ended up in a deadly trap of mud. They didn’t stand a chance…

19. The Herd Tried Their Best 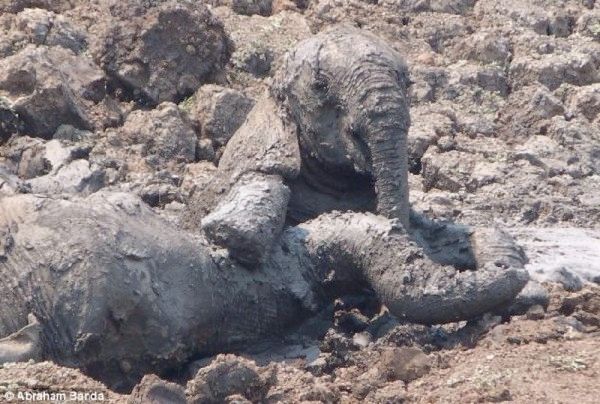 The elephants in their herd tried to save them, but it was no use. They cried and made a lot of noise, and they finally got some professional help. Thankfully, a group of conservation workers got there fast! 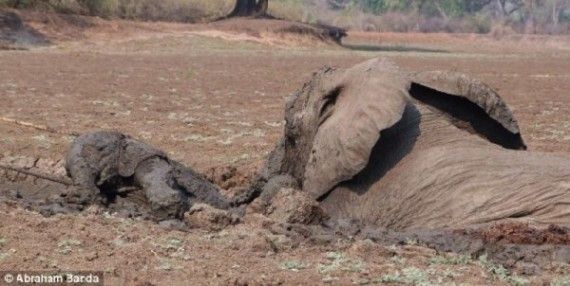 Time was very precious because if the mud was starting to dry, getting any of these elephants out would be impossible. Both the South Luangwa Conservation Society and local wildlife authorities started planning the rescue mission. 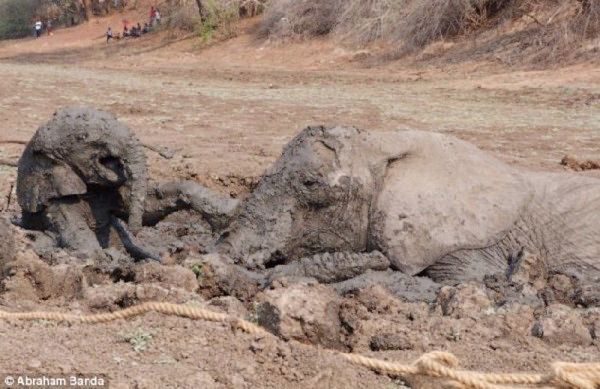 The rescue teams used anything that could help take out the elephants from the mud: ropes, cars, manpower. The baby elephant was scared and desperate to be with her mother. 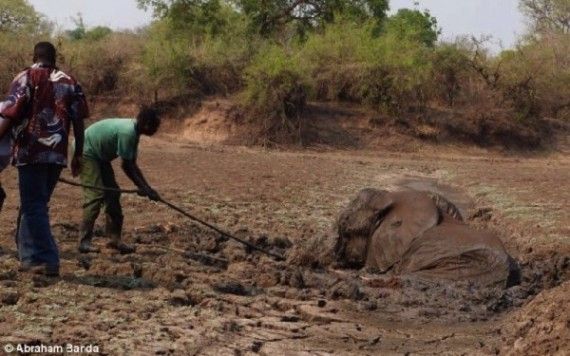 The baby elephant resisted being saved, as it wanted to stay by his mother’s side. Rescuers had a hard time saving it, as the mother’s trunk also trashed them. Even in such a mess, the mother wanted to protect her baby. But then something amazing happened… 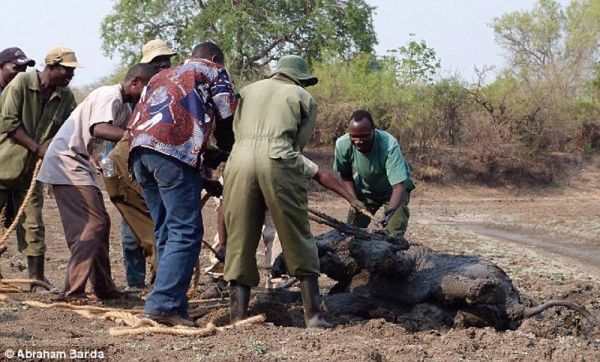 The little elephant got free after a few attempts, but he was so desperate to stay with his mom, that he went back in the mud, getting stuck again. The whole time, he cried for her. The rescuers eventually got it out, but things weren’t looking good for the mom… 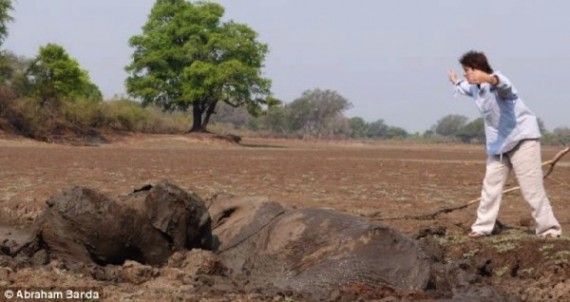 The team had to shoo the baby elephant away from the mud and towards the herd. It was time to save the mother too. She could no longer thrash them with her trunk, as she was exhausted and seemed to give up… 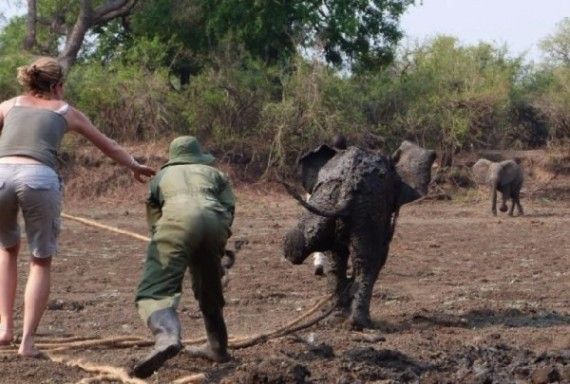 Rachel McRobb was one of the team rescuers from the South Luangwa Conservation Society. She said that ‘conservationists believe that man should not meddle with the natural order’. Then she continues… 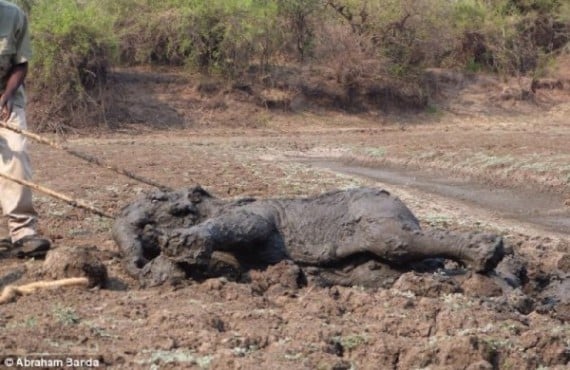 ‘We should allow nature to run her course however cruel or grim it seems to be’, said Rachel. She also admitted that unless the wildlife issue was created by man – like animals being trapped in a fence or in a snare, they shouldn’t intervene. But this was a special occasion as you’re about to find out. 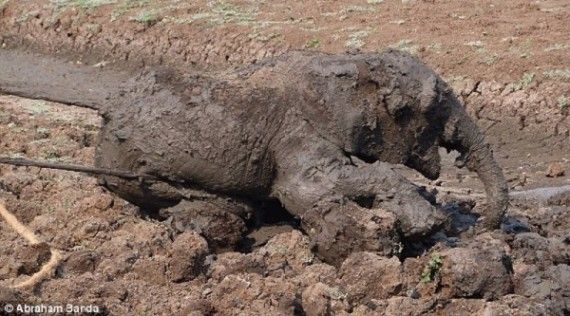 While she agreed with the aspect of leaving nature to her own devices, she also said that this case was special. They just couldn’t bear to know that the two elephants died and they didn’t do anything about it… 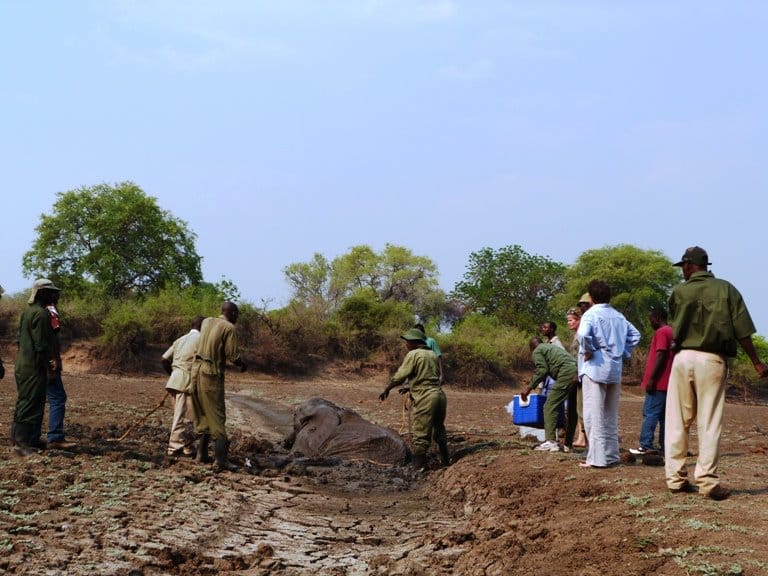 The rescuers saw ‘the dreadful plight of a baby elephant trapped in the mud’, and they ‘could not stand by and watch them struggle and slowly die’. Nobody could ignore such a heart-breaking sight. And they still had to save the mother as she was still trapped in the mud… 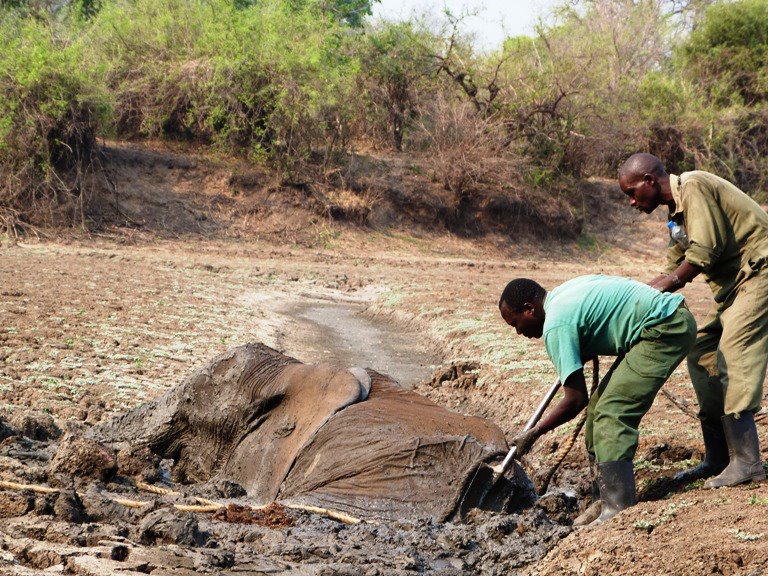 Saving the bigger elephant was very difficult, as she was much heavier. The team needed a tractor to pull the mother free from the mud. Manpower was too little, so the tractor was the only choice. 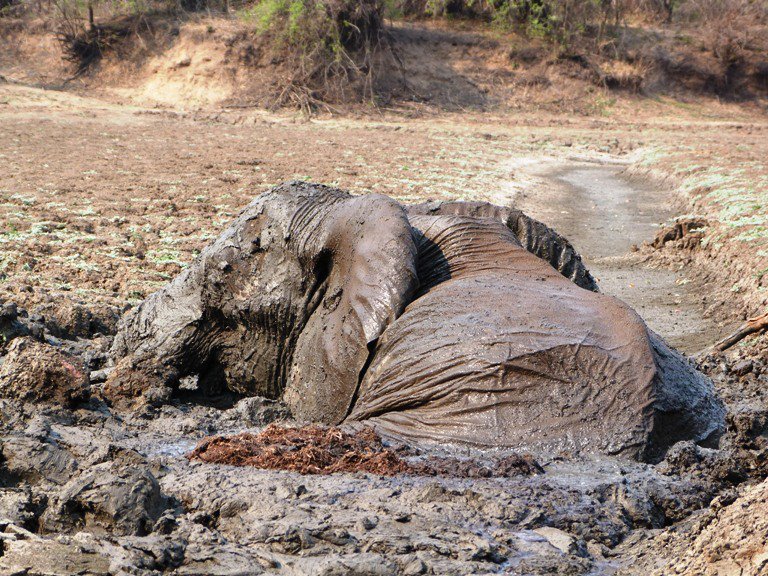 The elephant mother seemed to move inch-by-inch, and she sensed it too. So, she scrambles through the mud and with a last burst of energy she finally gets out of the mud. The next photo is truly heartbreaking! 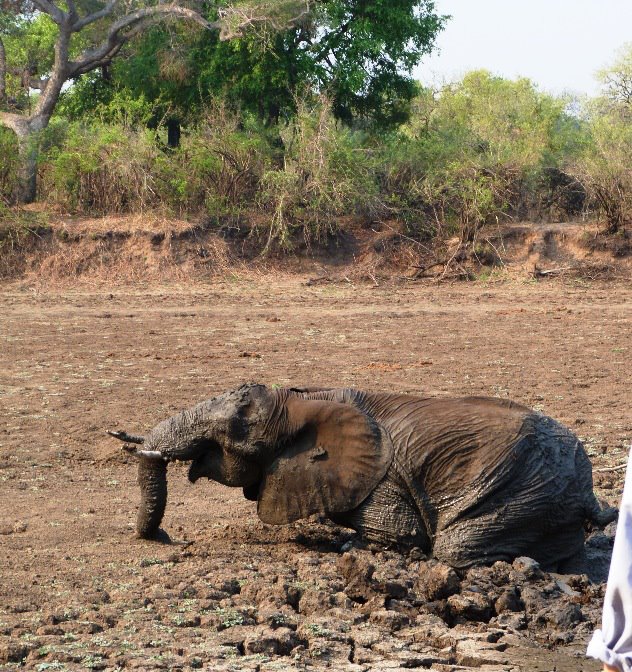 Even though she was weak and tired, with wobbly legs, the mother elephant finally gets up and heads towards her baby and the herd. The baby was crying for her, while the herd was waiting beyond the trees.

6. It Was a Long Struggle 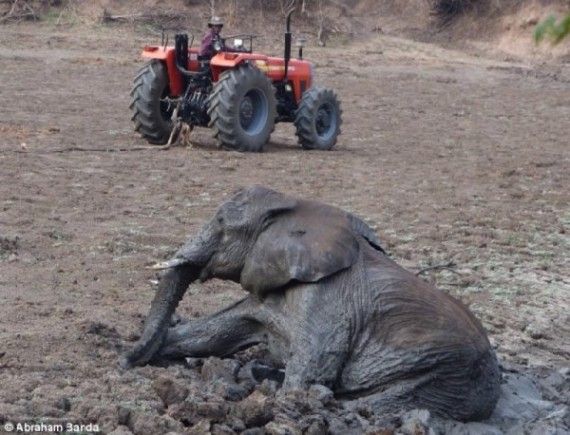 After struggling to save her baby, the mother finally gets to the calf and her family. It needed a lot of power, patience and a very strong and long rope, but it finally turned to be a happy ending. You’ll never guess how long it took them to get the two elephants out of the mud… 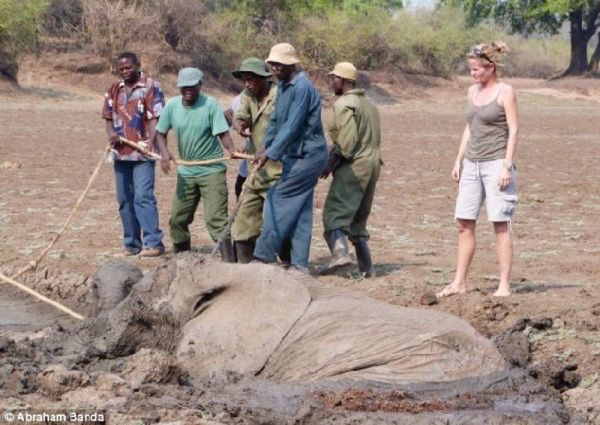 Two hours in that heat were excruciating for the officials with the Zambia Wildlife Authority, and the conservationists of the South Luangwa Conservation Society. The mud was rapidly drying and the heat made everyone’s job harder.

4. Locals Jumping in to Help 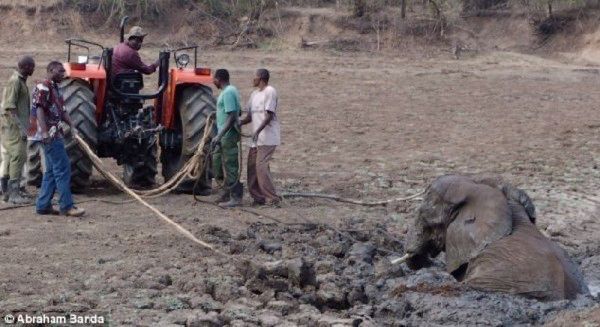 There were more people than the official rescue teams out in the heat, helping the poor elephants. Locals joined too, according to the Kapani Safari Lodge staff statement. Here is what it said… 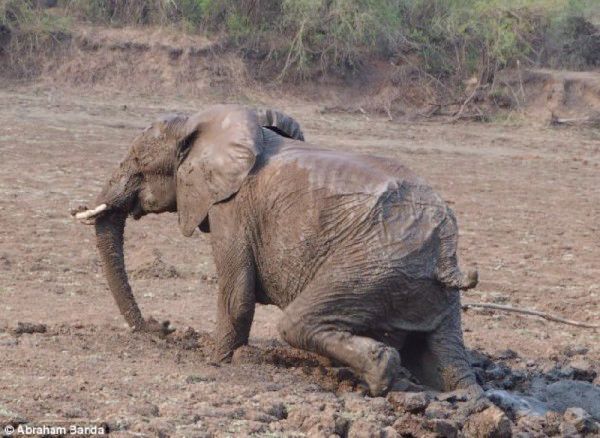 It really was ‘heart-warming to see how many local people joined in the efforts to free the two elephants…it was the happiest possible ending’, said the statement. And we couldn’t be more grateful! 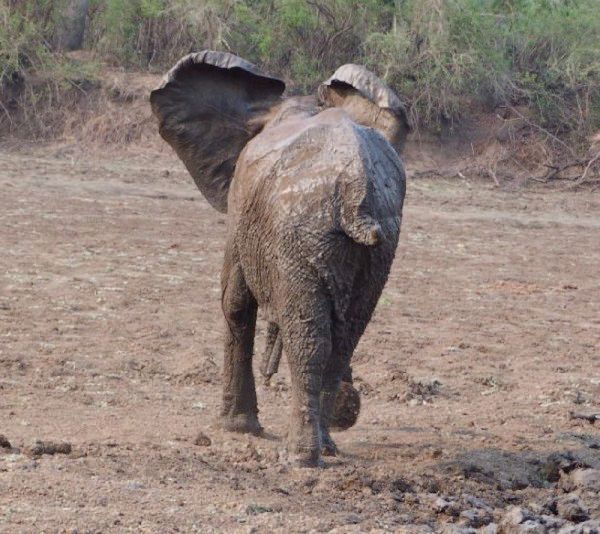 It indeed was wonderful to see that people took the humane decision to save these poor elephants. Tourists, locals, and conservationists made it all possible and together they have created an unforgettable memory. 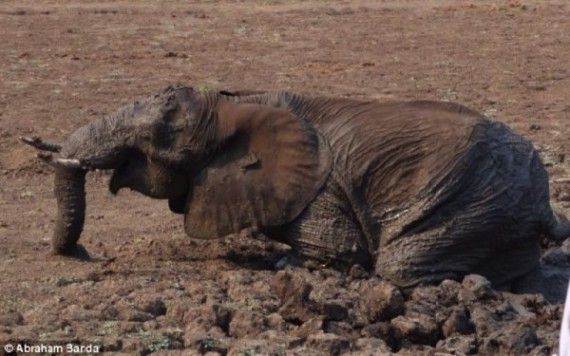 We know that elephants have a great memory and we hope that they will meet their saviors again and probably recognize them. Even without the animals’ gratitude, it is great to see it all ending happily.