Everyone has a guilty pleasure or two, as it’s just a part of being human. However, while some might be tamer than others, most of us try to keep an open mind to people silly hobbies. With that in mind, we present to you a man that enjoys dressing up and living as a dog. You’ll be blown away by the reason he chooses to do this in #13! 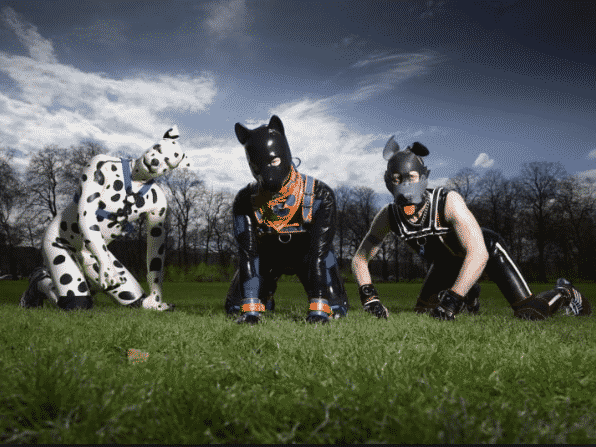 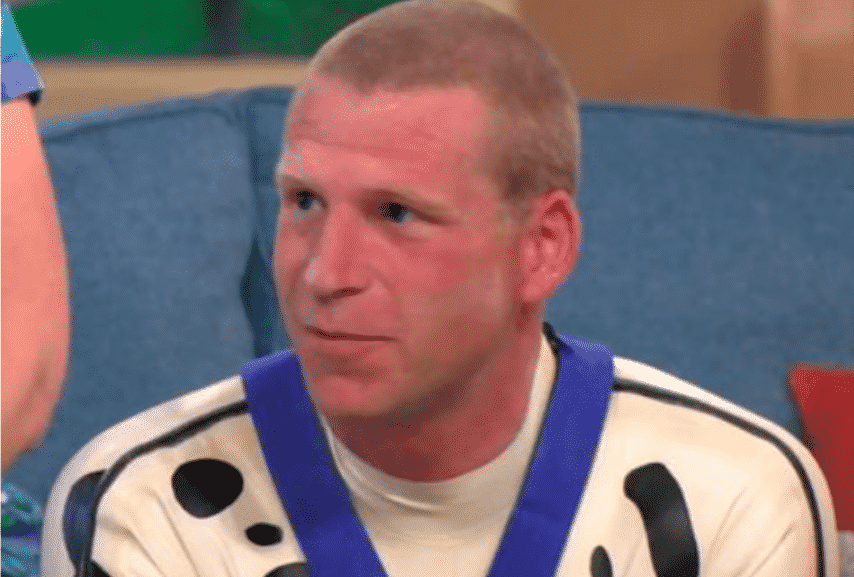 Meet 32-year-old lighting technician Tom Peters, a man who caused great waves on the British daytime TV show, This Morning. It seems that Peters have a very unusual recreational hobby that he enjoys partaking in with his current partner. What is the hobby you might ask? You won’t believe it until you see it for yourself… 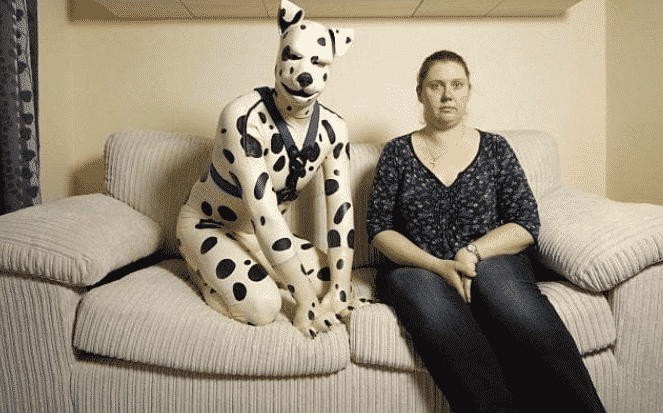 You see Peters enjoys indulging in role-play that he calls, ‘puppy play.’ He goes by the name Spot and enjoys not only acting like a dog, but also dressing up as one. It seems that the costume helps him to better assume his role as a puppy.

You’ll be shocked at where he purchased the costume. 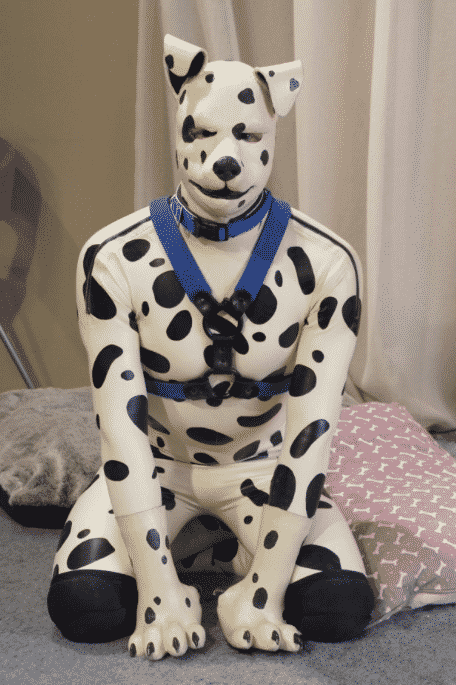 When interviewed by the Telegraph, Peters admitted that he purchased the suit from eBay. Who knew that eBay had such niche items for sale?

“My first accessory when I discovered the pup life was a simple orange collar and a lead, but over the years I’ve collected many outfits and accessories to perfect my Dalmatian look!” Peters said.

So how did his odd fascination begin? 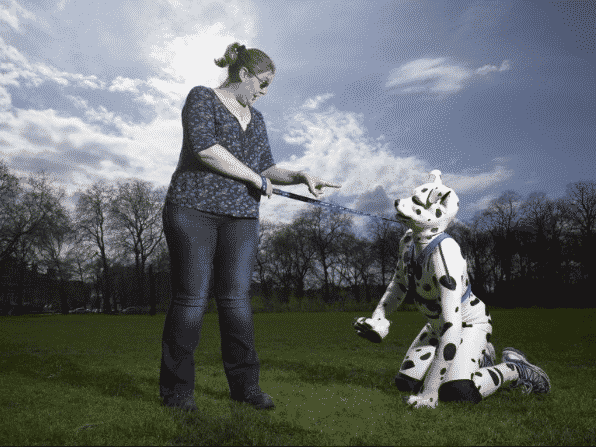 “I first discovered puppy play when I was engaged to my first girlfriend, Rachel,” says Tom. “But eventually our relationship slipped apart. My current partner, however, understands puppy play and we’ve further developed the idea together.”

And the couple really takes the role-play seriously as you’ll see in the next photo. 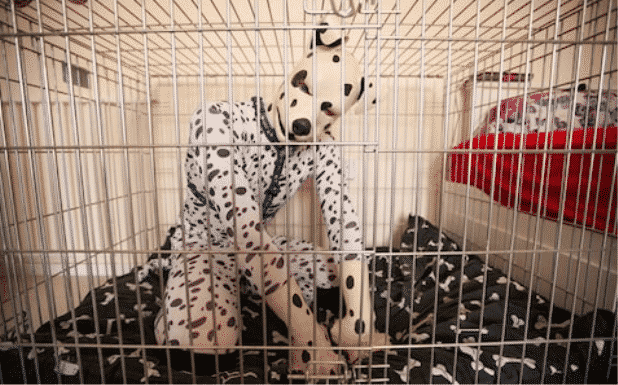 Tom takes his puppy role-play very seriously and he has dedicated a lot of time and money into the lifestyle. He has slept inside of a crate and has spent around £4,000 on puppy play accessories and costumes. Apparently, he needs to purchase tons of talcum powder to get in and out of his puppy suit.

But that’s not where it ends. 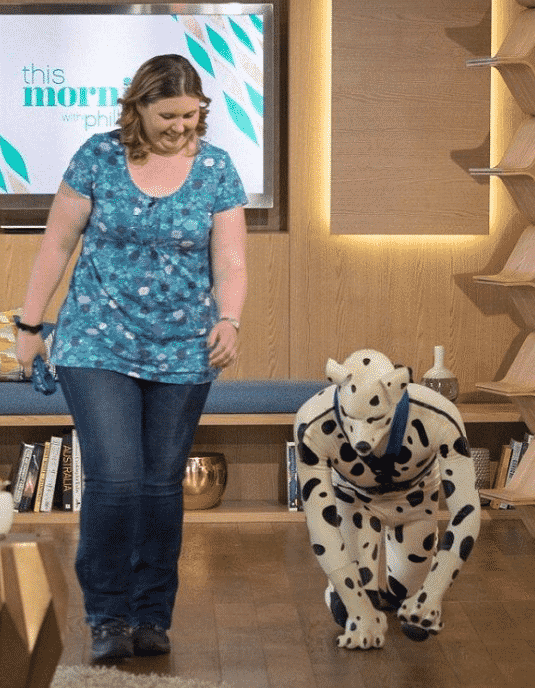 Tom doesn’t just dress the part of a Dalmatian puppy but he also acts the part. He walks around on all fours and eats food out of a bowl. He even lets his partner walk him around on a leash. “Over time, my lifestyle and persona have grown into the playful puppy you see now,” Tom has said. 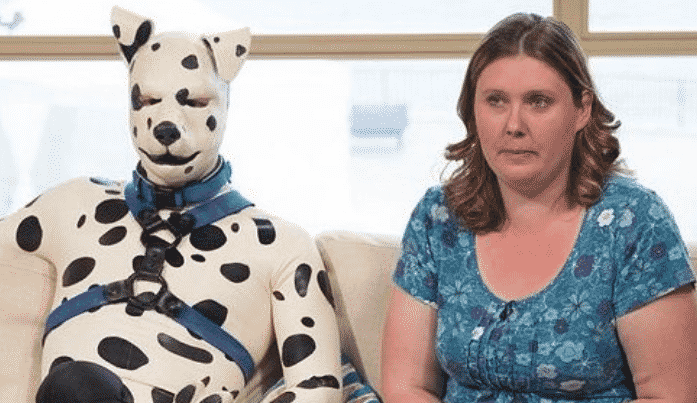 Tom seems to believe that his love for animals is what lead him to his role-play decision. “We never had dogs when I was growing up,” Tom told the Telegraph. “However, I’ve always shared a good bond with animals – they’re always very calm around me.”

So what made him want to share his lifestyle with the world? 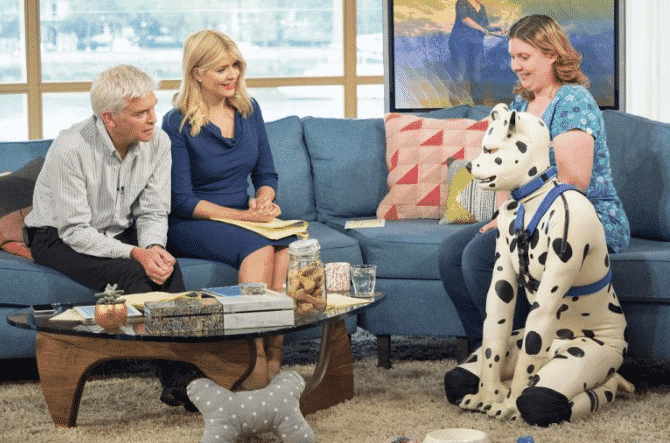 Tom decided to make his appearance on daytime television in order to shed light on the community. “People think of it as seedy and that no one should see it,” Tom said. “But we’re not there to cause mischief, we’re there to have fun and literally be treated like a puppy.”

You won’t believe the question one of the hosts asked Tom to answer! 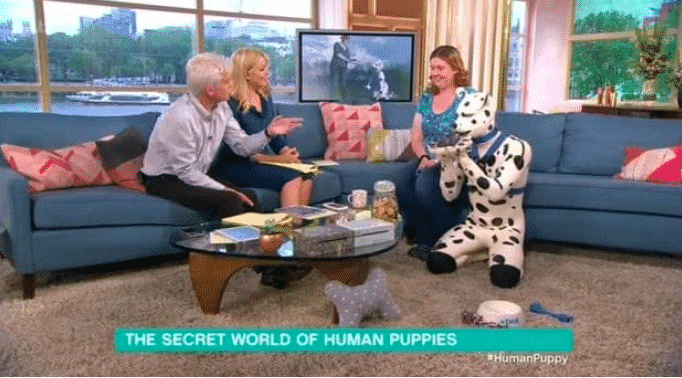 Since Tom has completely adopted the puppy lifestyle in his free time, the hosts were naturally curious about how he uses the bathroom. Has he adopted all of the mannerisms of a dog? No, it seems he hasn’t gotten that far into it stating, “I will drop back into the human mindset for going to the loo.”

But Tom isn’t the only one that enjoys this and he knows a few more people that engage in puppy play as well. 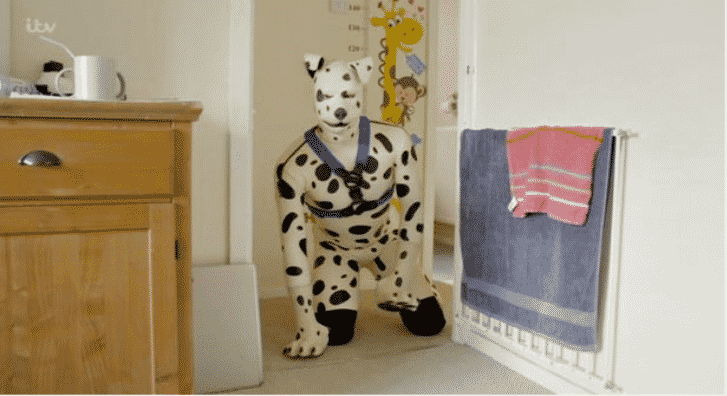 “Some people understand it better than others,” Tom spoke out saying, “I don’t push it onto them if they don’t want to know, as that is unfair to both them and me. But most of my close friends also practice puppy play and so they will get me puppy related treats when I see them.” 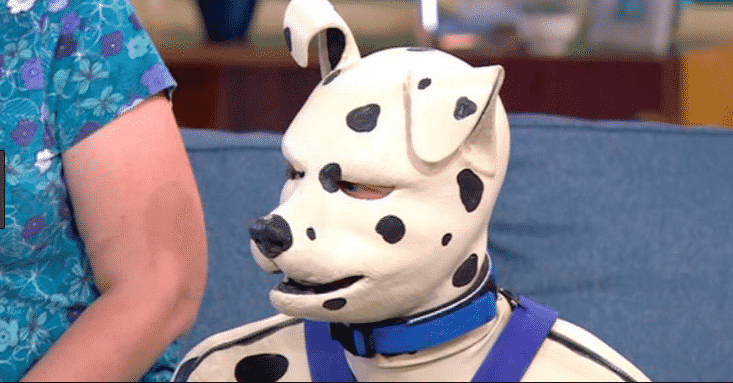 So is the puppy play fascination all innocent or is there an added layer to things? Tom freely explained by saying, “It’s not a sexual thing. It is a lifestyle, it’s just escapism. To get away from money and the hectic lifestyle we have.”

However, he did have a bit more information to add to that that may very well surprise you! 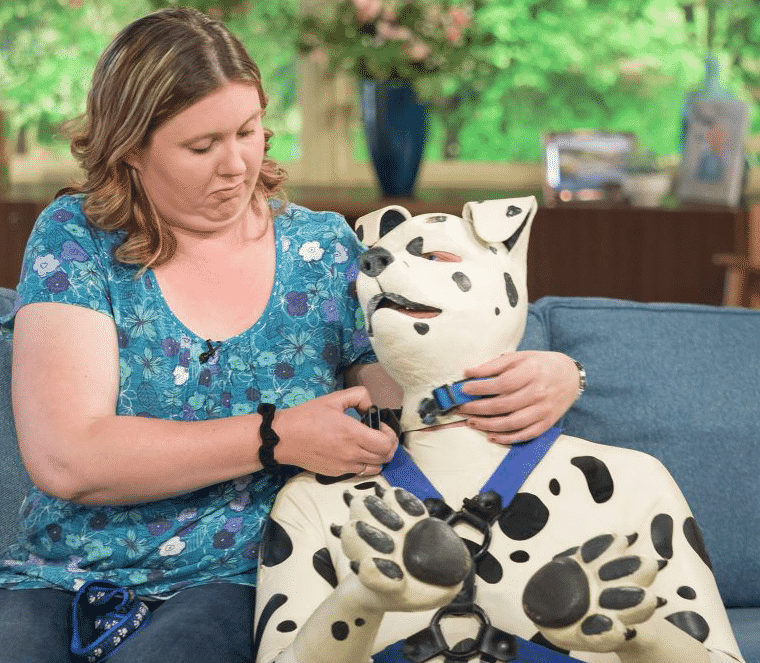 Tom, however, has stated that while the puppy play did not originate with a sexual theme, it can sometimes lead into it with his partner. “Because you relax and unwind, you could start from being a puppy and lead onto something in the bedroom,” he added.

This, however, was a bit much for his last partner. She did accompany him on the daytime TV show and her reaction is quite shocking. 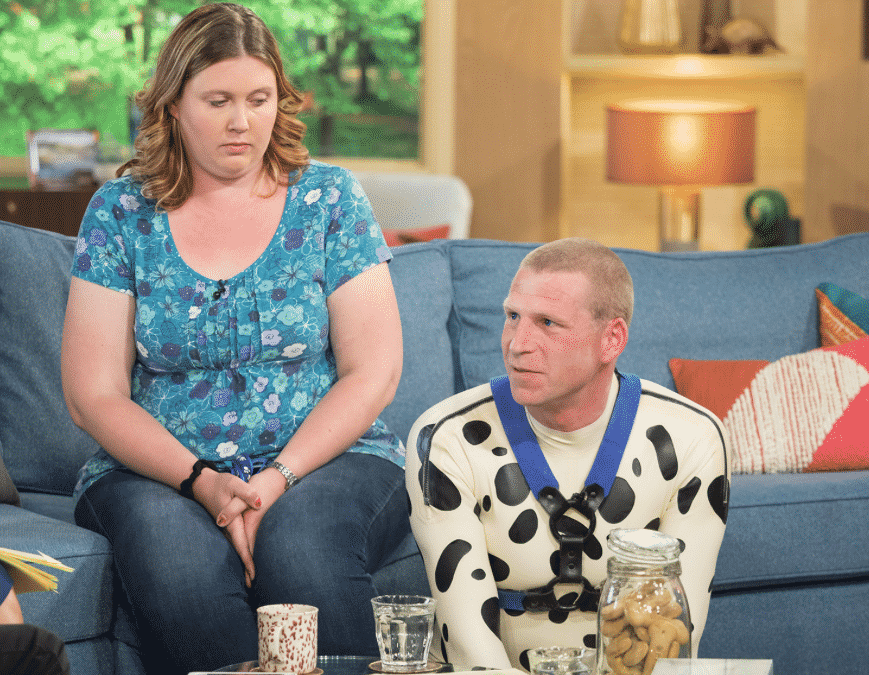 Ex-fiance Rachel Watson was once engaged to Tom, however, things got called off after she found out about his affinity towards being a dog. She still stays in contact with Tom and considers him one of her best friends. She even stated that they are closer now than they were when they were engaged. 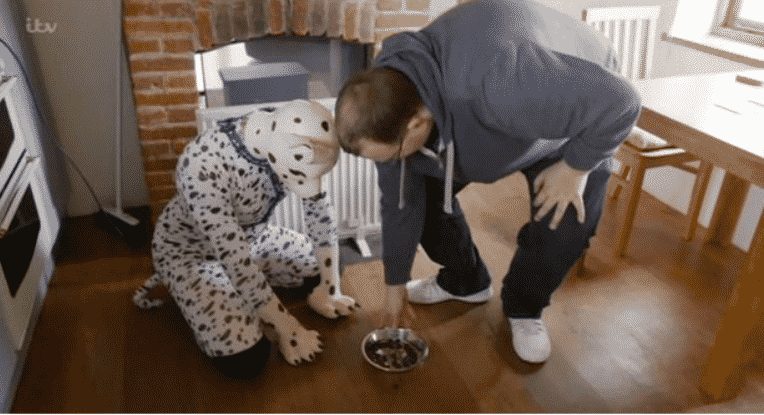 A documentary called The Secret Life of Human Pups is placing a specific spotlight on Tom and his lifestyle. The documentary is also going to showcase other pups and their way of life. Tom has high hopes for the documentary… 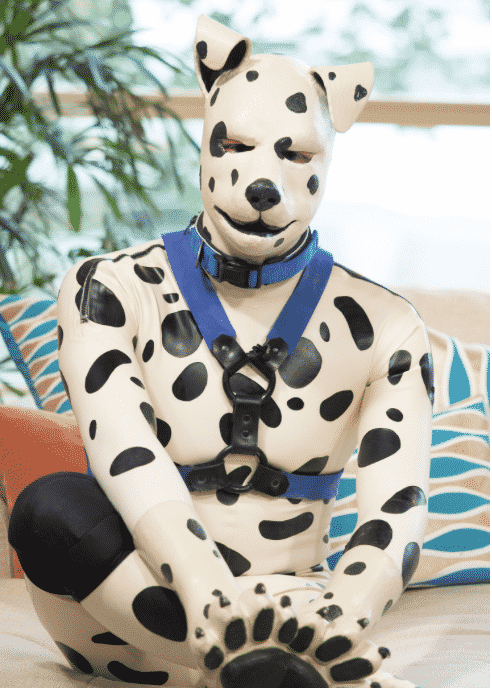 Tom hopes that through the documentary more and more people will find the lifestyle less weird. Tom also hopes that the documentary will help other pups come out of hiding and better understand their desire to want to embrace this lifestyle. In fact, Tom has been helping out many new pups. 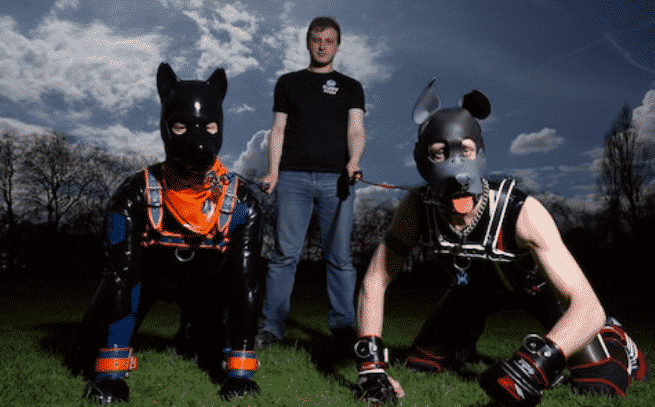 Tom has gone out of his way to guide and help other pups feel comfortable with the lifestyle. He explains how he lives his life as a pup and how others can adapt to it. You’ll actually be surprised to find out that this affinity for dog costumes doesn’t take up much of his weekly time. 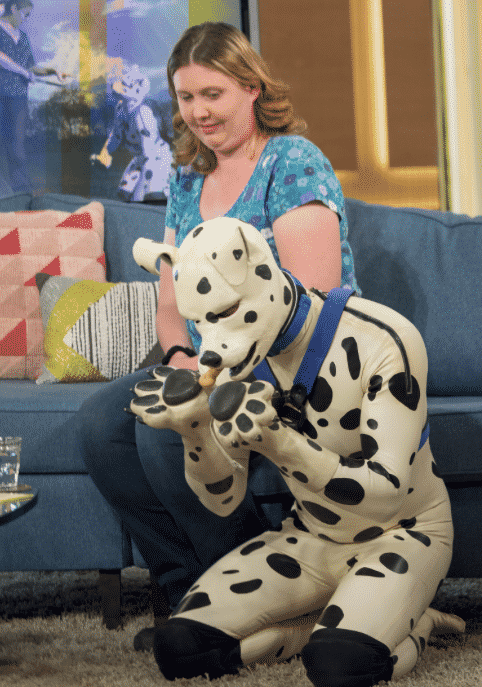 “I don’t do this all the time,” Tom stated. “I probably spend about a day a week as a puppy – but not all at once. Sometimes it may just be five minutes, and at other times it will be an hour or longer.”

People’s reactions haven’t always been positive especially after all of the publicity Tom a.k.a. Spot has received. In fact, Twitter had a bit of a field day with the situation.

There was a mixture of reactions from people, some negative, some positive and some just utterly amused by the situation. However, none of that has discouraged Tom in any way and he will continue to live out his lifestyle happily. He doesn’t see the harm in innocent role-play that doesn’t hurt anyone in the process. 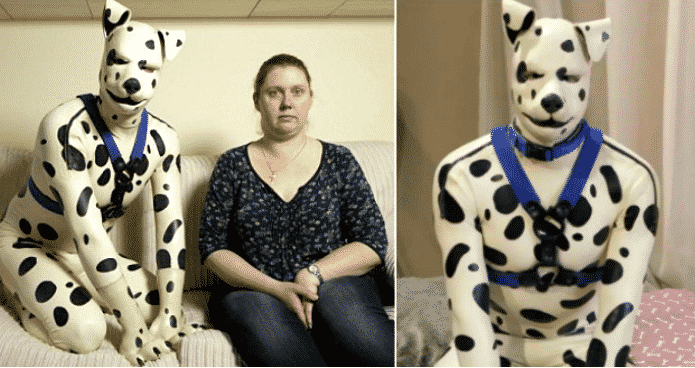 “There is a lot of love and care in the community, and I think that is something that is quite often lost in day-to-day life when people are focusing on deadlines and such like. Being a dog is a chance to relax, to unwind, and just be happy and playful – things most adults have very little time in the day to do,” Tom stated.

It seems that as long as this lifestyle is just a personal choice that makes a few people happy, then who are we to judge or stand in people’s way? After all, how many of us have pretended to be superheroes or Barbie dolls when we were little kids.