Man Spent Cleaning Off Veteran’s Tombstones – Here Are The Results

Many Americans respect and honor fallen veterans in their own way. Whether it be parades, ceremonies, or monuments. However, many people forget to honor and take care of the graves that stand as the last visual marker for many of these fallen saviors. The Good Cemeterian, Andrew Lumish, takes time out of his own life to go around and clean the tombstones of veterans all over the Tampa Bay area. 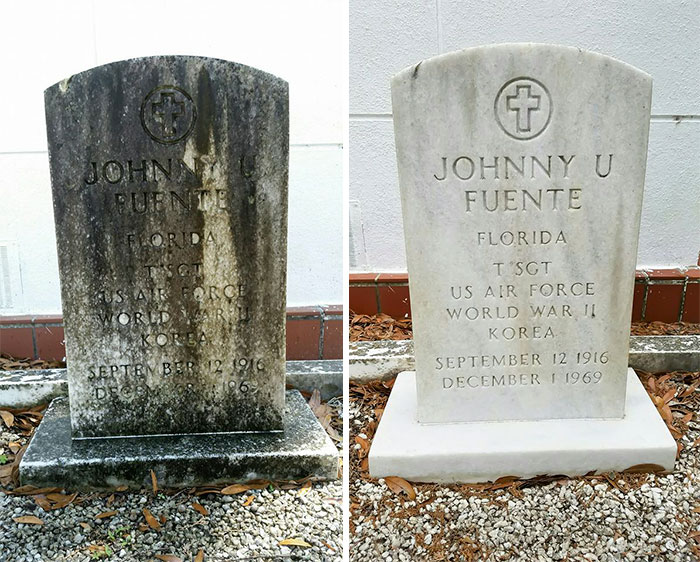 These images are an example of one of the graves that Andrew has had his hand with. Andrew runs a carpet and upholstery cleaning service in Tampa, Florida and only spends his only day off cleaning the graves of passed away veterans even dating back to the civil war. 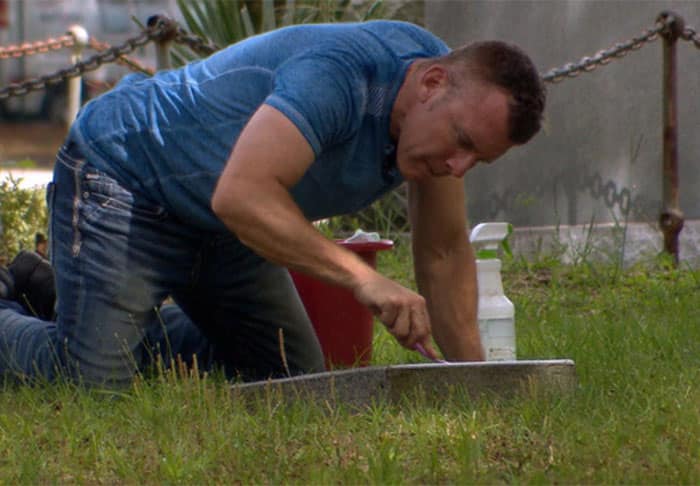 Working hard to run his own business, Andrew takes the same vigor when cleaning the tombstones of the deceased. Andrew first rinses the headstones with water then sprays them with a cleaning chemical compound called D/2. Just like someone scrubbing soap scum from their tile in the shower, Andrew scrubs away years of mold, dirt, and decay. 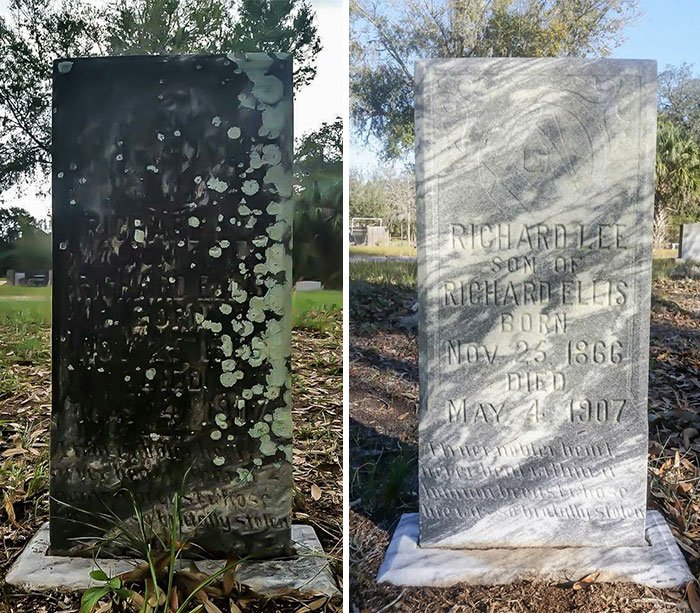 As said before, Andrew cleans the stones of even the oldest of graves. This image of a tombstone for a veteran from the late 1800s wasn’t even readable anymore. That is, until Andrew got his hands on it. The once pitch black tombstone, now shines in the sun with a brilliant silver gloss that looks like the tombstone was made only yesterday.

9. Glowing in the night. 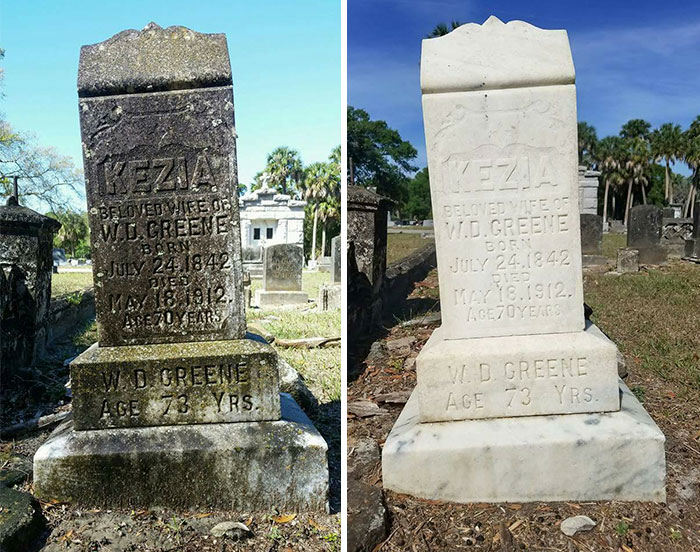 What once was a dark cemetery, is now brightened throughout the night be these newly cleaned headstones. Rain brings algae, and the stone used to make tombstones absorbs and holds on to a large amount of the moisture during storms. Because of this, a thick layer of algae and moss will begin to grow on tombstones. However, once Andrew works his magic on them, they glow with a luster that makes night time at a cemetery seem like its day. 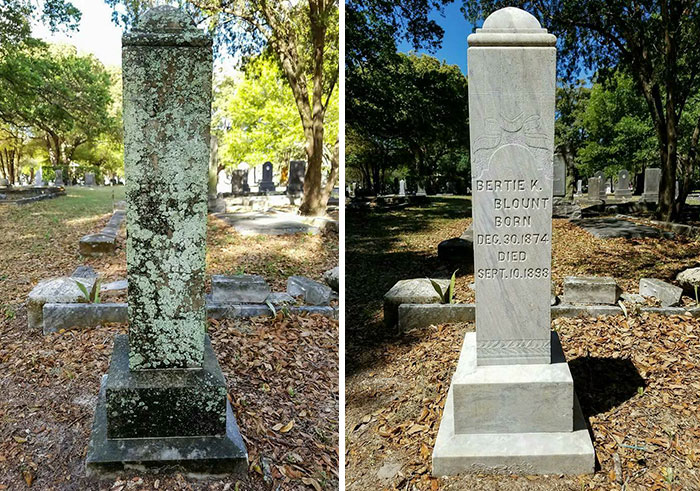 Andrew says that he studied how to properly clean gravestones in his free time. He uses the same techniques and chemicals that all the national cemeteries in the U.S. use on their gravestones. Andrew admits that doing this work is not easy. It can take as long as 3 months to fully restore an untouched gravestone. 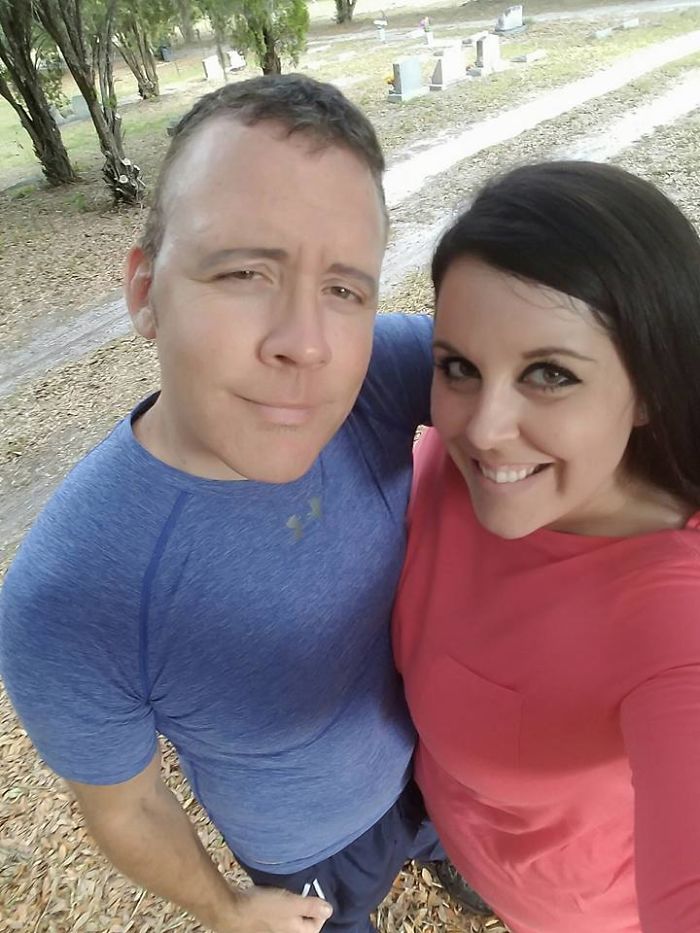 Andrew is not alone when in his endeavors to restore the gravestones of fallen veterans. His wife accompanies him almost every Sunday to support him and help in any way that she can. Furthermore, Andrew posts before and after pictures of all the graves he restores on his Facebook page. His page has amassed a large following of people who cheer him on as he works to respect fallen American heroes.

6. Know the people you clean. 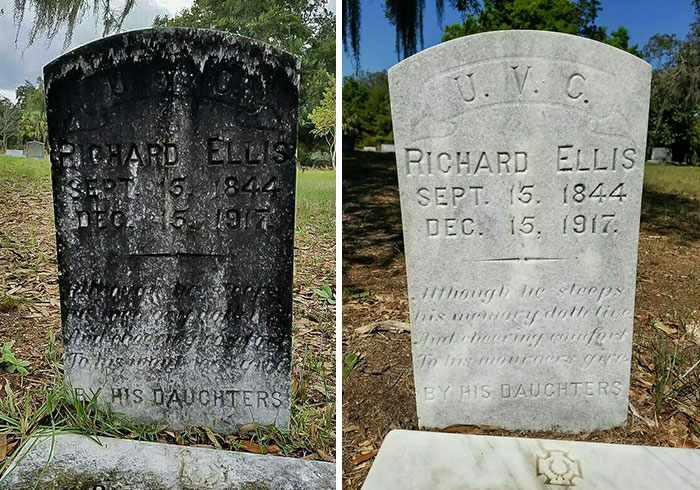 Source: boredpanda.com
Along with these before and after pictures that Andrew posts on his Facebook, he also provides brief descriptions on the person whose grave he restored. He does research on the people who rest beneath the tombstones in a way he keeps their graves and the memories of them alive. 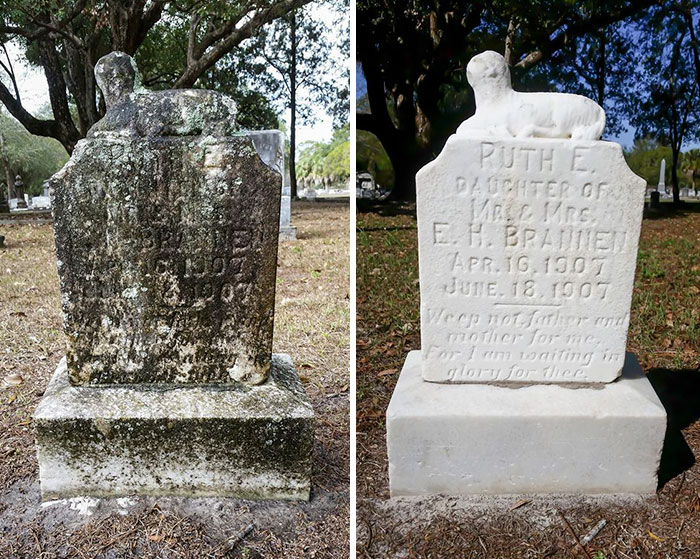 Andrew doesn’t have any connections with the people whose graves he restores. He learns everything he knows about them after he does research on them. Even though these fallen heroes have no connection with Andrew, he has spent the last 5 years restoring their tombstones to the best of his ability.

4. Honor for the one honoring. 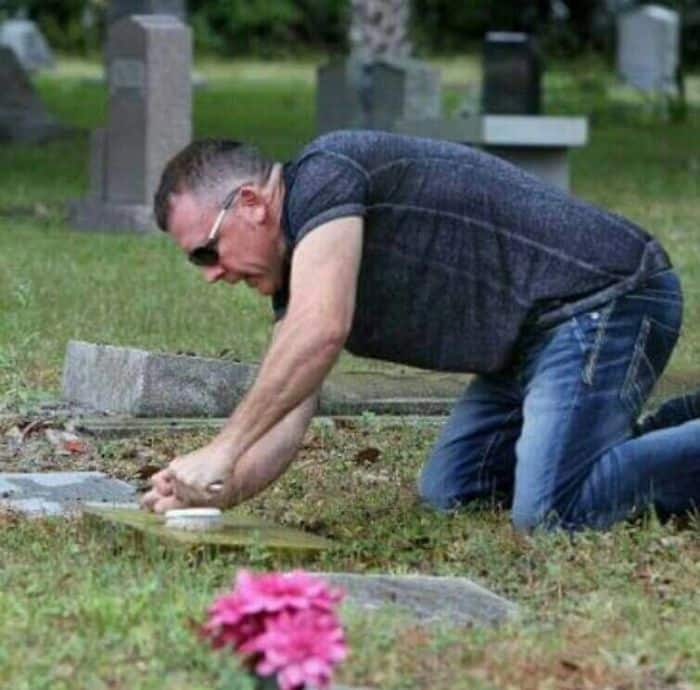 Andrew was honored by the Department of Veteran Affairs for his efforts in restoring their tombstones. He doesn’t just clean the tombstones, Andrew carefully brushes and details every single inch of the tombstones. As said before, this process takes months to accomplish, but the results are well worth it.

3. Not only national recognition. 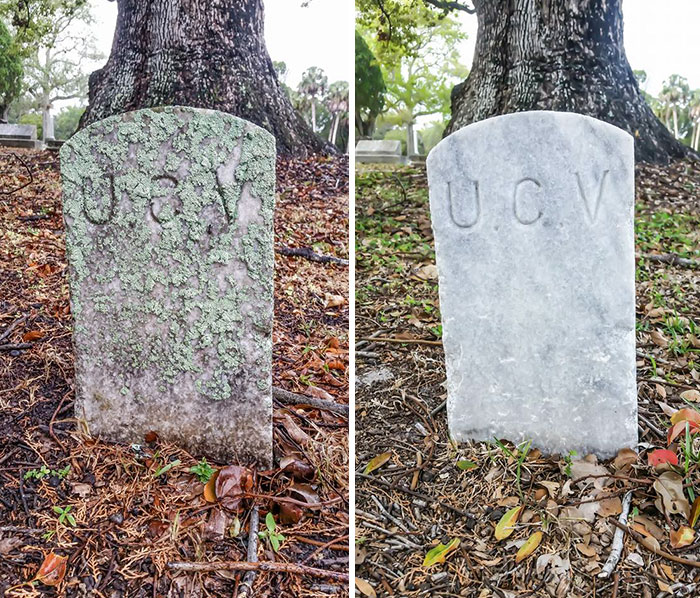 Not only does the Department of Veteran Affairs acknowledge Andrew for restoring the graves, but the families of the deceased are even more grateful. Andrew receives many phone calls and comments from families who are unable to make it to the cemetery where their loved ones lay. Because of this, they are unable to take care of the graves themselves. Since Andrew takes care of these tombstones for them, they look at him as an angel sent down by God.

2. Andrew’s outlook on the whole thing. 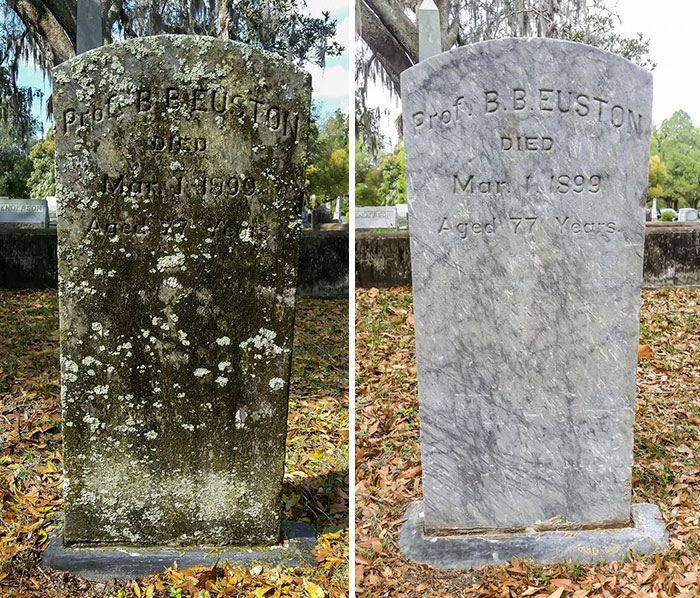 For Andrew, doing this work is not only an extremely good deed, but it is like a history lesson. Many of the people whose graves he restores aren’t in history books. However, he can learn quite a bit from their gravestones and the research he does on them after the restoration. Andrew comments that people think they have it tough, but the people of the graves that he cleans died for a purpose, and many of them have been forgotten. 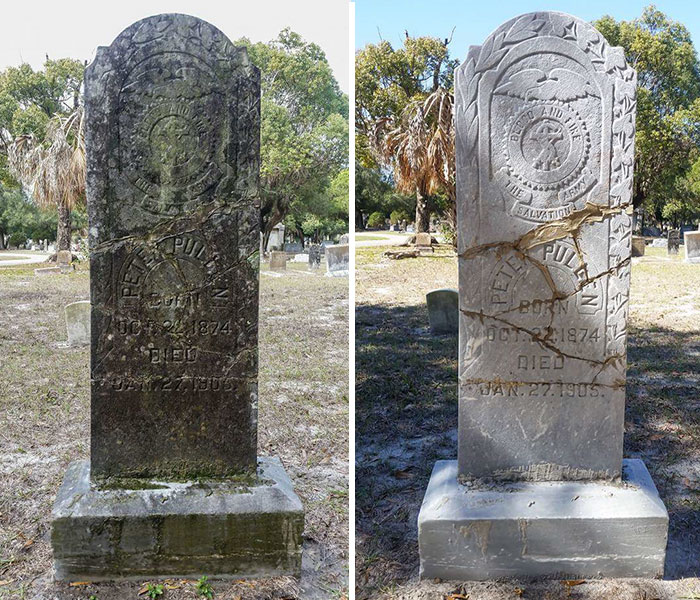 Andrew is proud that he can bring life back to the tombstones of the deceased. He believes that his work can not only bring their graves to the light of day, but can also spread awareness and appreciation for the fallen that have been forgotten. His work is an inspiration to many, and for good reason. Without Andrew, many of these graves and fallen veterans could have been lost in history forever.