How to tell the “real” @realDonaldTrump, and why it’s a security lesson for us all 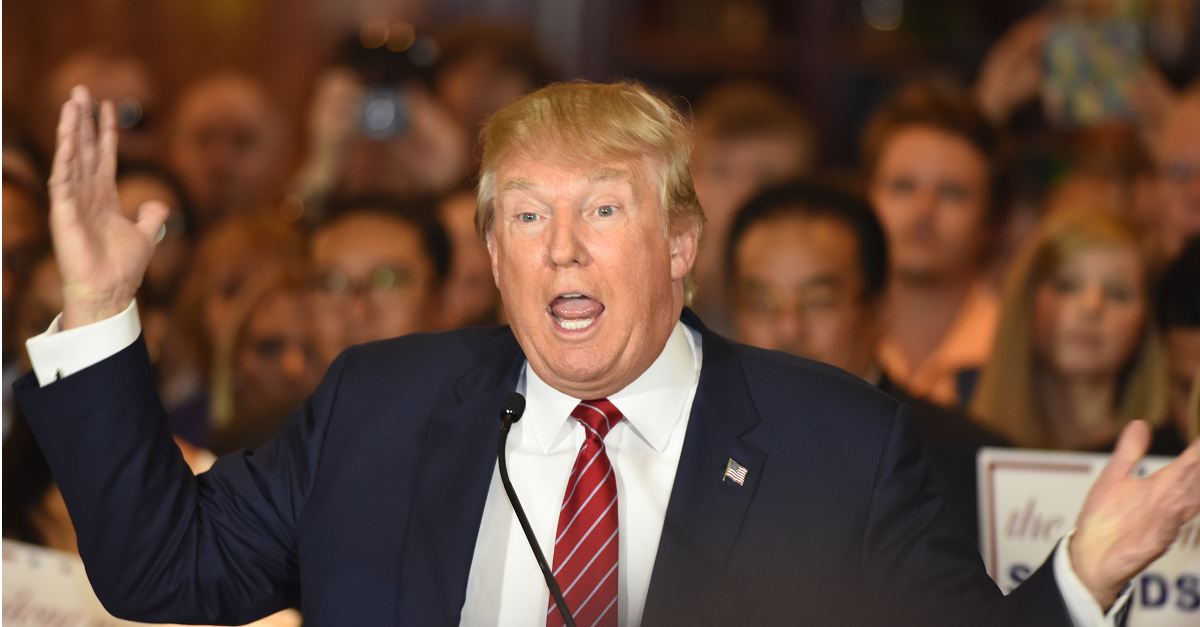 We can never say it often enough when it comes to staying safe on the internet: just because somebody claims to be a particular person doesn’t mean they’re not someone else entirely.

Like, say, the guy who pretended he was Justin Bieber, but who was actually a 35-year-old UK man who was subsequently imprisoned for talking children into stripping in front of a webcam.

And then again, there’s Donald Trump.

Even the most casual look at his Twitter feed shows that sometimes the presidential wannabe flings insults like monkeys hurling dung, in full-throttle vitriolic FULL CAPS!!!

Anybody whose mind “SHORT CIRCUITS” is not fit to be our president! Look up the word “BRAINWASHED.”

…while sometimes he sounds like a bland, albeit upbeat, campaigner, doing the e-version of kissing babies: that is, thanking people for their support in a professional way, sans full caps, replete with hashtags and links.

More than a few people have noticed a pattern in this split-Twitter-personality.

One of those people is Todd Vaziri, a visual effects artist who recently wrote about a theory that he came to after 60 days of Donald Trump’s tweets. Vaziri’s theory goes as follows: the more stately, full-sentence tweets, which mostly seemed to come from an iPhone (third-party apps such as Tweetbot show this type of metadata), come from Trump’s staff, while the hyperbolic, fragmented, angry tweets are coming from the Trumpinator himself, via his Android.

If you’d like to see for yourself, Jake Marsh has published a spreadsheet that groups a collection of @realDonaldTrump tweets according to device used to publish them, along with the guess at who did the writing/publishing.

Some interesting observations have arisen since Vaziri posted his theory. Most notably, it seems that the tweets that thank people come from the iPhone, or from what people have been assuming are Trump staffers.

All of these recent tweets with “thank you” sent by iPhone (staff). @hotdogsladies pic.twitter.com/31Q0pUntS3

Gawker has gone so far as to use Tweetdeck to filter out the iPhone tweets presumably coming from Trump’s handlers and to deliver up “pure Donald” via its REAL real Donald Trump Twitter feed.

There have actually been some factoids to bolster the Android-is-Trump theory too. For one thing, the New York Times reported that he’s an Android guy – specifically, Samsung Galaxy is the tool of his 140-character opinions.

Now, there’s even more solid data to back up the hypothesis.

David Robinson, a data scientist at Stack Overflow, last Tuesday published the results of text analysis that he says confirms that Trump writes only the (angrier) Android half that makes up his @realDonaldTrump feed.

Robinson’s been writing about text mining and sentiment analysis recently, and the Trump hypothesis was just begging to be investigated with real data crunching, he said.

What he found confirmed that Vaziri’s hypothesis is correct, he says. He arrived at this conclusion by analyzing:

Robinson also analyzed the message content. In doing so, he found that the most frequently used words that were most likely to come from the Android included “badly,” “crazy,” “weak,” “dead,” and “dumb”. In other words, a lot of what he calls “emotionally charged” words.

This supports the original hypothesis that this is the “angrier” or more hyperbolic account.

As far as sentiment analysis goes, the Android/Trump feed uses about 40% to 80% more words related to disgust, sadness, fear, anger, and other “negative” sentiments than the iPhone account does, Robinson concluded.

We can look at it like this, from a security perspective: on the internet, it is indeed true that nobody knows you’re a dog.

Just because someone appears to be a particular person, doesn’t mean they really are. Be careful what you believe online, and keep an ear out for tell tale signs of growling.

Image of Donald Trump courtesy of a katz / Shutterstock.com

Restaurants in Banff that You Have to Try