How to Get your White Clothes White Again 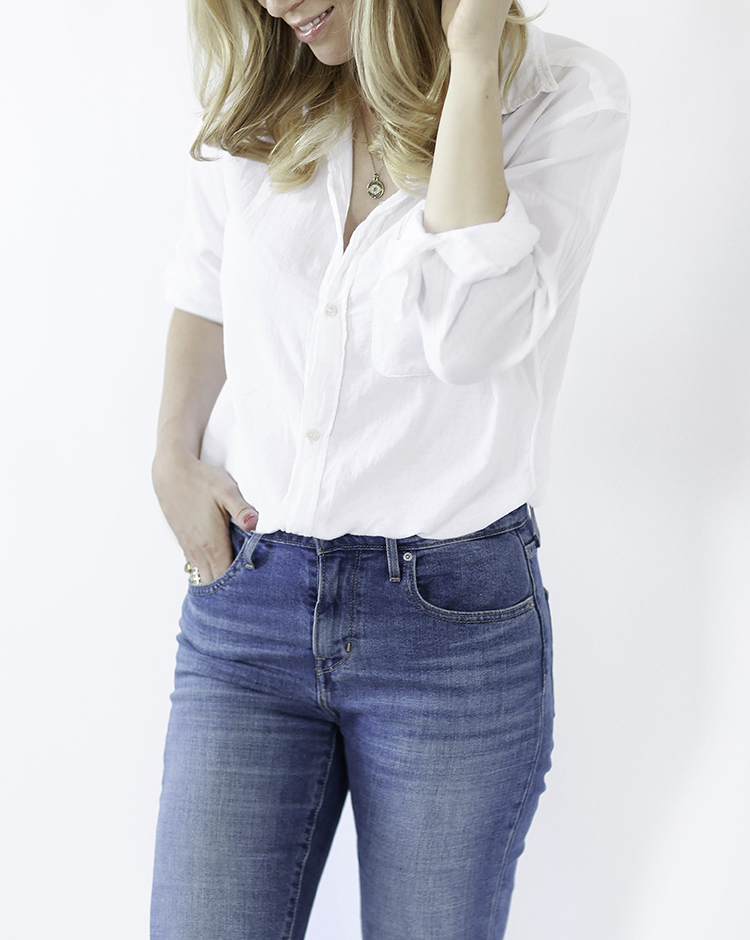 Several months back, I had one reader ask me about my favorite white shirts. And as much as I love a good white button down or tee, I despise how quickly the shirts lose their crisp, fresh look. That was pretty much my reply to that reader question..”that no matter what I buy, they end up looking dingy after a few months..” But, being that they’re pretty much a staple in my wardrobe, it would be a purchase I’d make several times a year.

In response to that readers question, I had another reader, Nicole, comment about soaking her whites in Oxiclean overnight and “how it works like a charm.” Now, of course I’ve seen the over the top infomercials claiming what a miracle product Oxiclean was, but it wasn’t until then, that I even thought to try it.

Later that day, I ran to the drugstore, bought a large bucket, some Oxiclean and soaked four of my white button downs and five of my tees in the solution. After a night of soaking, I threw everything in the washing machine and couldn’t believe the results! BRIGHT WHITE CLOTHES.

I know that many of you are reading this and thinking “DUH! Where have you been?” I immediately text messaged a bunch of my friends and half of them were like “Um…. yea. You didn’t know that?” and the other half shared my excitement from this new found knowledge. Keiko then told me that her mom swore by soaking her whites in a mixture of laundry detergent, oxiclean and a ton of ice cubes. Apparently, this combo is even better than what I described above, but I have yet to try it.

For the few of you who didn’t know this trick (and I do realize it probably is just a few), I just had to share. Apparently I’m the one whose been living under a rock. My whites have brand new life and that’s something that will most definitely save me a ton of money.

*Soak your whites in a bucket or water + 1 scoop Oxiclean. I fill the bucket to the top and use the end of a mixing spoon or whatever you have on hand, to stir the mixture together.

*Let it soak overnight (or any 6-12 hour period). You don’t have to be strict with this, but I’ve found, the longer I let the clothes soak, the better. Every now and then, I’ll give the mixture a stir.

All of these directions are also on the back of the Oxiclean box!

PS: This is NOT sponsored, just something I wanted to share!