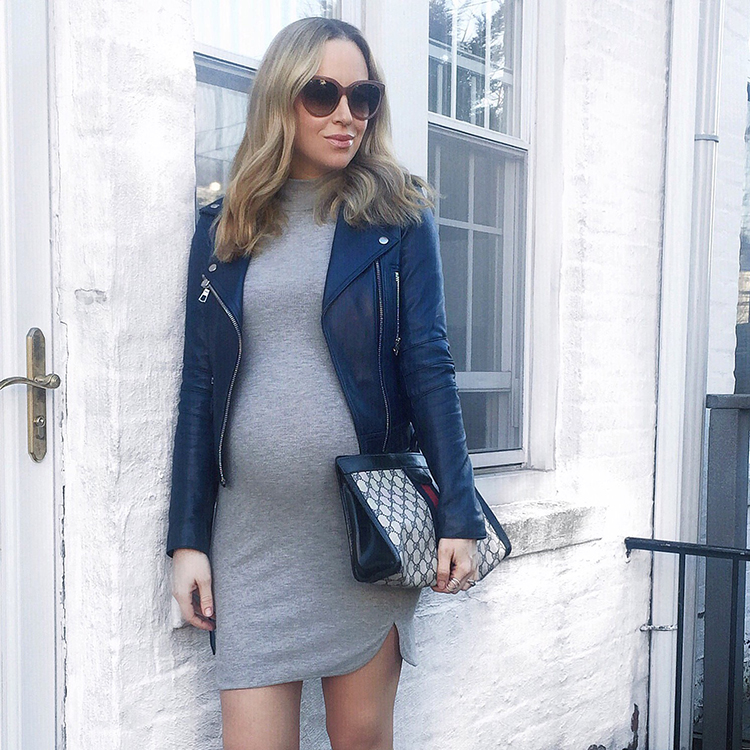 First off, I apologize for the crappy iPhone photo. I had an intimate baby shower this weekend and meant to take some regular photos of my outfit and the baby bump, but it didn’t happen! I wore the above outfit which consisted of an old H&M dress (non maternity), a Parker leather jacket, Manolo’s and a vintage Gucci clutch.Well, I’m now technically 34 weeks, but I’m happy and thankful to report that for the most part, I’m feeling pretty good. Sure, some things have slightly changed since my last update, but overall, I know it could be worse.Food Cravings:
Citrus! I can’t get enough of oranges, tangerines and orange juice. I crave it all day long, but especially when I wake up feeling parched. Other than citrus, give me anything juicy! I’ve always loved apples and pretty much eat one every single day, but with this pregnancy, I’ve been specifically craving green apples.Also, I’ll always be a carb-lover and being pregnant brings it out more than ever. As soon as I wake up, I usually eat an orange and then I like to follow it up with something bread-related. Normally, I wish I could eat something naughty like a croissant, a blueberry muffin or a bagel, but once the first trimester passed, I’ve been pretty good at keeping myself in check and only allowing myself to do that 1-2x a week. On the days where I’m trying to be good, I’ll eat a slice of toasted ezekiel bread with peanut butter, banana and honey if I’m in the mood for something sweet or sliced avocado with lemon, sea salt and red pepper flakes if I’m in a savory mood. This is breakfast #1 and then I’ll move on the breakfast #2 (sometimes even #3) about an hour later. I’m definitely the hungriest from the time I wake up to about 2-3PM and after that, I’m able to eat lighter and I tend to get full a lot quicker. In the mornings, I graze on something every 1.5-2 hours. Once dinner comes around, I will have a few bites of something and feel full.Grossed Out By:
In the first trimester, it was eggs and chicken, but now, I can’t say that anything grosses me out. I’ve never been a picky eater so I’m happy that some things have stayed the same. That’s one habit I really hope our child picks up from us, being an open-minded eater.

Physical/Body Changes:
Since my last update and basically in the last few weeks, the biggest physical change has been these ugly brown spots that have appeared on my face. After some research, I’ve learned it’s called Chloasma, also known “the mask of pregnancy.” I have a big one on my nose and a few on my cheeks and I’ve even found them scattered on my arms and chest. I’ve asked around and apparently it’s fairly common and seems to go away post pregnancy. If not, I will most definitely be visiting my derm.

The Linea Nigra: I thought because I’m so fair, I might not get it, but at around 30 weeks, it showed up. Although very light, it’s certainly there.

Also, shaving. It’s gotten so hard that it’s almost comical. At this point, I just feel it out and hope for the best.

Hair/Lashes: While my hair definitely feels thicker, my lashes have gotten so sparse! I’ve always had nice, full lashes but with this pregnancy, I feel like they’ve gotten so short and limp. Not happy!

Working Out: I’m still trying to be as active as possible and as I’ve said before, it makes such a huge difference in how I feel. I’m on a lot of message boards and at this stage of the game, a lot of women start feeing exhausted and experiencing major discomfort, but I really feel that by keeping active, all of those pregnancy symptoms will stay away longer. Yesterday, I did 30 minutes on the stair master (the rotating steps and remember, don’t lean your entire body on the machine or hold on, it’s almost pointless….) following it up by doing a series of some light arm exercises using 8-10lb dumbbell weights and always finishing off with stretching. My body has never felt so rickety, so daily stretching is a must. Whether it’s walking around, just try to move around and get some sort of physical activity.

Sleeping: That’s my one major complaint. Sleeping is getting increasingly harder. Between getting up about 3-4x a night to use the bathroom and trying to get comfortable on my side, it’s an endless night of tossing and turning.

What I’m Most Excited About:
of course, # 1 is meeting this little human being, but other than the obvious…
*to sleep on my stomach.
*to have a feast of sushi and sashimi with some sake.
*to be able to comfortably shave and see what I’m doing.
*to have a cocktail
*to be able to aggressively workout.
*to wear all of my clothes and not be so limited with outfits!!! I’m sorry if they’ve gotten a bit boring!
*This sounds vain, but it is what it is, getting a chemical peel! I started getting them before I got pregnant and they make such a big difference in keeping my complexion glow-y. I’ve been good at doing regular face masks/exfoliating treatments at home, but the peels just help with that extra boost. It’s all about maintenance and preservation once you’re in your 30’s! And that’s the truth!

What I’m Most Nervous About:
To be quite honest, giving birth doesn’t really scare me. I don’t really have “a plan..” except, get me an epidural ASAP. Whatever happens, happens. However, what I’m most nervous for is the lack of sleep, and the hormonal, post pregnancy blues that I keep hearing about. Caring for another human being doesn’t freak me out as I have faith that our motherly/fatherly instincts will kick in.

Classes/Prep
I find it so fascinating how differently we all approach things in life, whether it’s everyday tasks or huge life changes that are about to take place, like having a baby. I have friends who are so incredibly organized and meticulous to where I sometimes think “wow, I wish I had half of those skills embedded in my DNA..” When they got pregnant, they read every book, took every class and made sure they were “prepared,” whatever that really means. On the other hand, there’s someone like me who has always been pretty go with flow. I’ve definitely read a ton of books and blogs, but compared to some of the women I’ve spoken to, I’ve been pretty relaxed. Is that a good thing? I really don’t know, but the one main thing I’ve taken away in all of my research, breast feeding will be one of the hardest things you go through as a new mom. Aside from the lack of sleep, I keep hearing/reading how new moms “wish they realized just how difficult it would be…” so while I’m not planning to take any lamaze classes or anything else of that sort, the one thing I’m planning on taking is a breast feeding class and along with that, finding a Lactation Consultant so I can easily reach out to her after the baby is born. It’s been one of the main pieces of advice I keep hearing about and one I plan to really listen to.

So, there you have it. If there’s anything that I left out, please feel free to comment and I’ll be sure to answer!