Hey guys we will today discuss about what is quantum computing , so let’s get started from the Introduction. 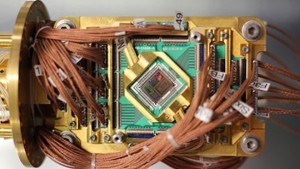 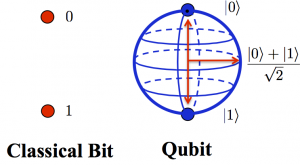 The Quantum computing is quite different than the Classical computing here the operation are not being relying on binary bits but there is Qubit came in the story. The Qubit  is a Quauntum bit of the quantum compution, It is the unit information.

A qubit is quite analogue of the classical bit . A qubit is a two-state quantum-mechanical system, such as the polarization of a single photon here the two states are vertical polarization and horizontal polarization.On the other hand if we consider a classical bit then it can only have a single state (either high or low ) at a time but this is not the same case with the quantum bit.

There are two states of the Qubit  are “0” and “1”  And the main feature/characteristic of this Qubit is that can achieve Two states at one time due to this when any task is perform by this bit (only limited to some specific) its no of operation to be done i.e algorithm gets reduce exponentially and where as speed get drastically increases since the no of the operation are reduces. 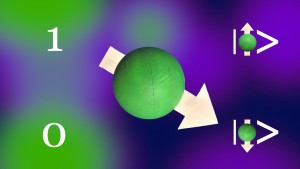 Due this feature we make use of Quantum computing but this is true universally i.e for every kind of process or work program done by  computing , it can be used for some limited tasks but in normal tasks classical bit is still faster and simpler than more complex Qubit algorithms. so for we haven’t completely moved on to the Quantum computing.

A qubit is a quantum system that encodes the zero and the one into two distinguishable quantum states. But, because qubits behave quantumly, we can capitalize on the phenomena of “superposition” and “entanglement.“So we will now discuss about the this states.

It is basically the principle of Quantum Mechanics and states that much like the normal physics the waves can be added i.e superposed and we get the result is valid state of quantum and Conversely it can be said that quantum state represents the sum of two or more other distinct states.

Superposition of basic states is the “0” range and the “2” , rangle 0 is Dirac notation for Quantum state that will result in “0” when we convert it into classical bit and Same case will be with “1”. 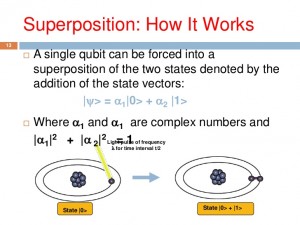 Quantum entanglement is that physical process which occurs when pairs or groups of particles are generated or interact in such a way that the quantum state of each particle cannot be described independently — instead, a quantum state may be given for the system as a whole.

An Entangled system is defined to be one in which Quantum state cannot factorized as a products of states of its individual particles.If entangled one constituent cannot described without considering the other(s). Note that the state of a composite system is always expressible as a sum, or superposition, of products of states of local constituents; it is entangled if this sum necessarily has more than one term.

So this pretty much Introduction on Quantum computing.