After cutting off file-hosting sites and Usenet providers, PayPal is now taking aim at VPN and SmartDNS services. The payment processor states that services which can be used to bypass measures to prevent copyright infringement, such as geo-blockades, are violating its terms of service.

PayPal is widely known for their aggressive stance towards BitTorrent sites, Usenet providers and file-hosting services, but VPN, proxy and SmartDNS providers might now suffer the same fate too.

This week PayPal stopped accepting payments for a company that provides VPN and SmartDNS tools, stating that these may facilitate copyright infringement.

So-called “unblocker” tools can be used to bypass geo-filtering blockades which Netflix and other video platforms have in place.

According to the message PayPal sent to UnoTelly and possibly others, these services are against the company’s policies because they help users to bypass copyright restrictions.

“Under the PayPal Acceptable Use Policy, PayPal may not be used to send or receive payments for items that infringe or violate any copyright, trademark, right of publicity or privacy, or any other proprietary right under the laws of any jurisdiction,” PayPal’s email reads.

PayPal informs the affected business(es) that their accounts have been permanently limited and that this decision can’t be appealed. This means that they have to switch to other payment processing providers.

UnoTelly informs TorrentFreak that the decision came as a shock, without any type of prior notice. The company is disappointed and sees the move as a direct attack on open and unrestricted Internet access.

“We are disappointed at PayPal’s unilateral action and the way it acted without prior warning. We provide both DNS resolution and secure VPN services. Our services are network relays that connect people around the world,” UnoTelly’s Nicholas Lin says.

Under PayPal’s policy every VPN and SmartDNS service is at risk of losing its PayPal account. However, it seems likely that the company will mainly take action against companies that market themselves as an “unblocker” service.

UnoTelly, for example, specifically mentions its ability to bypass geo-blocks imposed by streaming sites such as Netflix and Hulu.

PayPal’s actions are not an isolated incident. They come a few weeks after Netflix started to increase its crackdown on VPN services and other unblockers, as requested by copyright holders. It would be no surprise if copyright holders are also behind PayPal’s recent move. 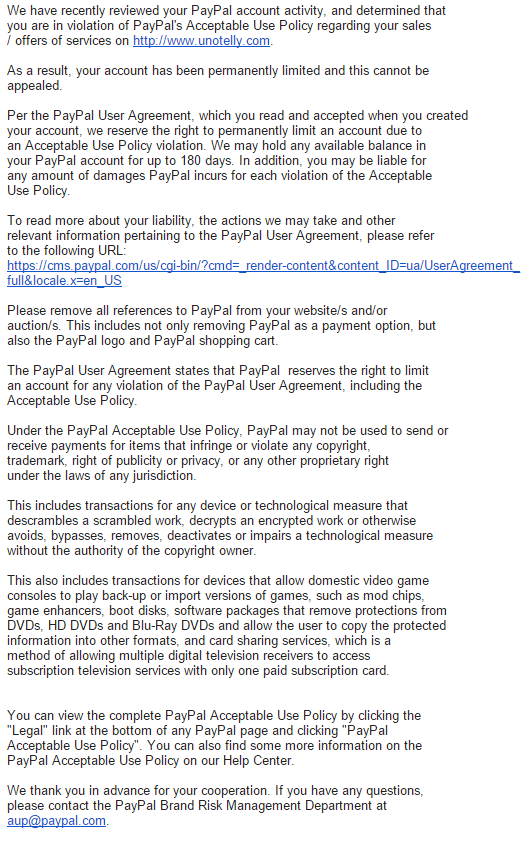