The USA Basketball team already missing NBA megastars such as Lebron James, Kevin Love, Carmelo Anthony, Chris Paul, Russell Westbrook, Blake Griffin and now they will have to do without out the second best player in the NBA Kevin Durant’. Here is what he had to say about the whole situation. Here is his statement: 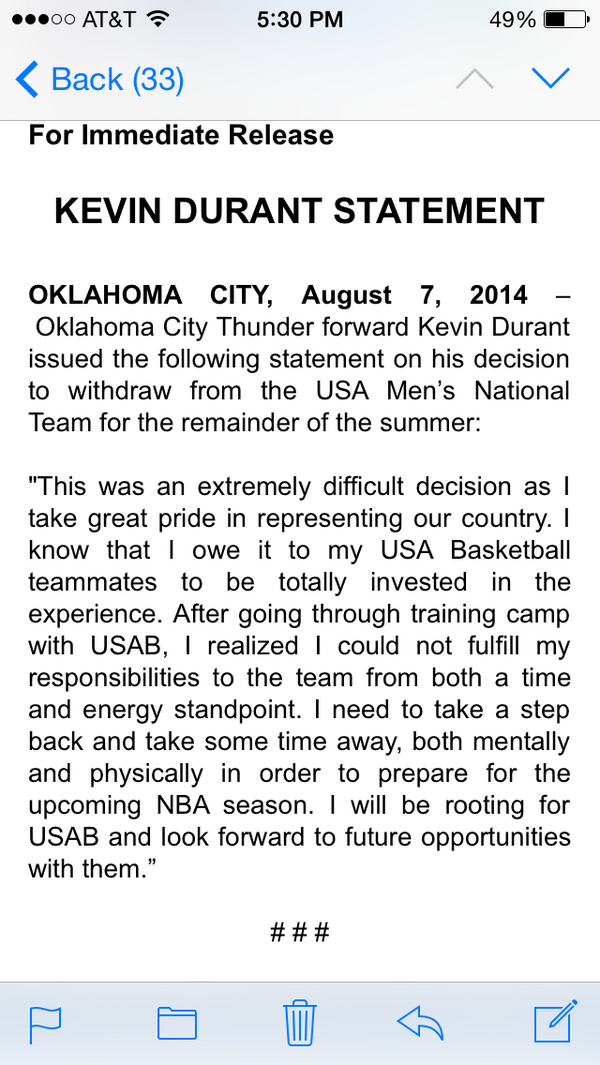 The chances of the U.S winning this tournament is slim to none at this point. In a statement, Durant called the chairman and his coach to tell them the news.
“Kevin … expressed that he is just physically and mentally drained from the NBA season and his attention to his many responsibilities,” Colangelo said. “He tried to give it a go at our recent Las Vegas training camp but felt coming out of camp that he was not prepared to fulfill the commitment he made to the team.
“Coach K and I fully support Kevin. His well-being is the most important thing to us and we support him taking the time to get ready for next season. He’s been part of the National Team program for eight years and a big part of the success we have achieved, and we look forward to him being part of our success in the future as well.”
Obviously, there has been concerns because of Paul George’s horrific injury that this may had been the reason for Durant leaving the USA team, but it has been reported it has nothing to do with George’s devastating injury. It was purely due to mental exhaustion.
SEE ALSO: Lebron James Performs Pre-Game Dunks You May Never See Him Do Again.