Still the fastest man on planet earth, Usain Bolt lead the Jamaican 100m relay team to Commonwealth Games 2014 record. It was the largest audience in Commonwealth Games history bringing in over 8 million viewers. Amazing to see how relaxed he is before winning another race. The games held in Glasgow, Scotland, Bolt is seen here dancing to “I’m Gonna Be (500 Miles)” by the Proclaimers. You will hear the entire crowd getting into it with him, hearing in the background everyone singing “I will walk 500 miles” is such an awesome performance for everyone to see.

Watch how Usain Bolt comes from behind on the last leg of the 4×100 relay record time race. You will see he is actually behind his opponent at first.

Picture of the fastest man on the planet doing his infamous winning pose. 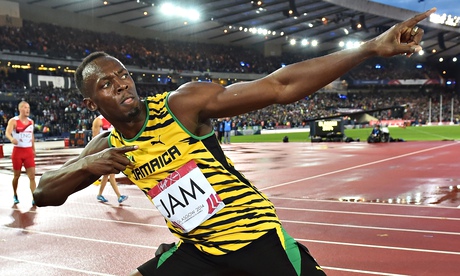