Abandoned on the streets with nowhere to call a home, this adorably sad stray kitten was lost and all alone. When a man accidentally stumbled across her in a box, he never expected the instant connection that the two would share. Here’s the heartwarming story of how one man helped change the life of a tiny stray who, otherwise, would have grown up alone on the streets.

You won’t believe how Game of Thrones inspired this story in slide #9! 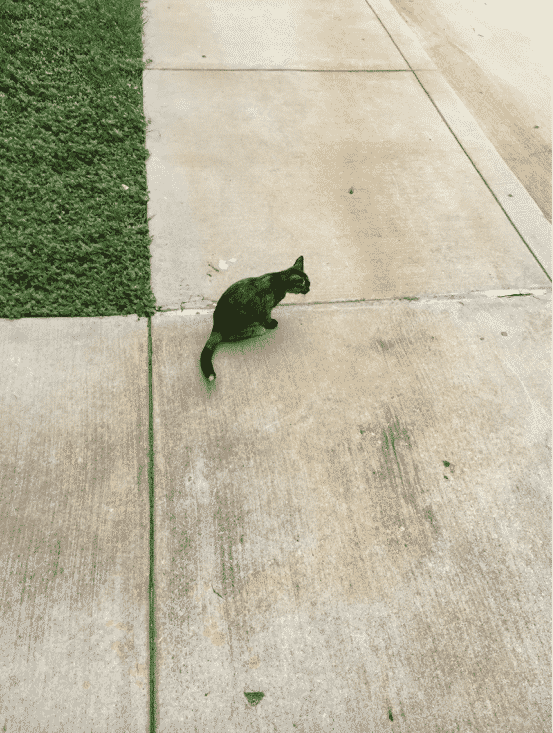 While on his way to work in Houston, Texas, an Imgur user by the name of “wollstone” happened upon an unexpected discovery. You see, as he made his way to the front doors of his factory, he saw an odd looking box that didn’t belong there. He happened to look inside and was surprised by what he saw… 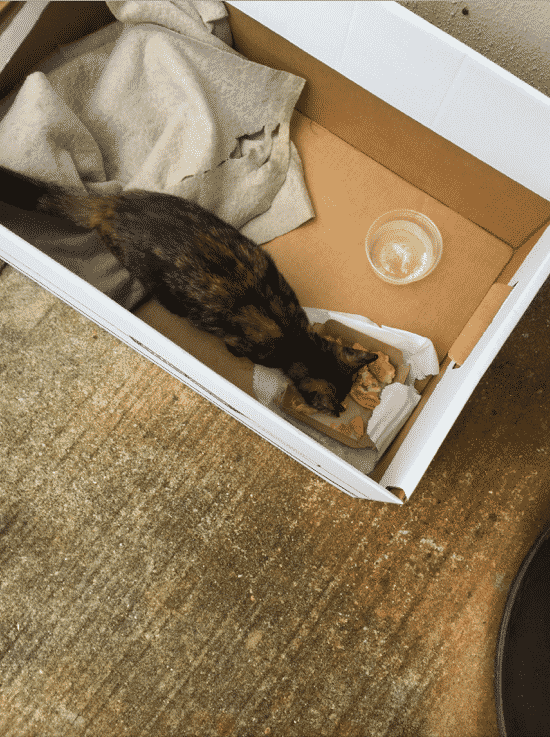 As the man peered into the box he saw a tiny kitten inside, left alone on the streets to fend for herself. Inside of the box was a half-eaten cheeseburger that the kitten was having a hard time nibbling on. He noticed that she was so little that she probably couldn’t even eat the solid food yet… 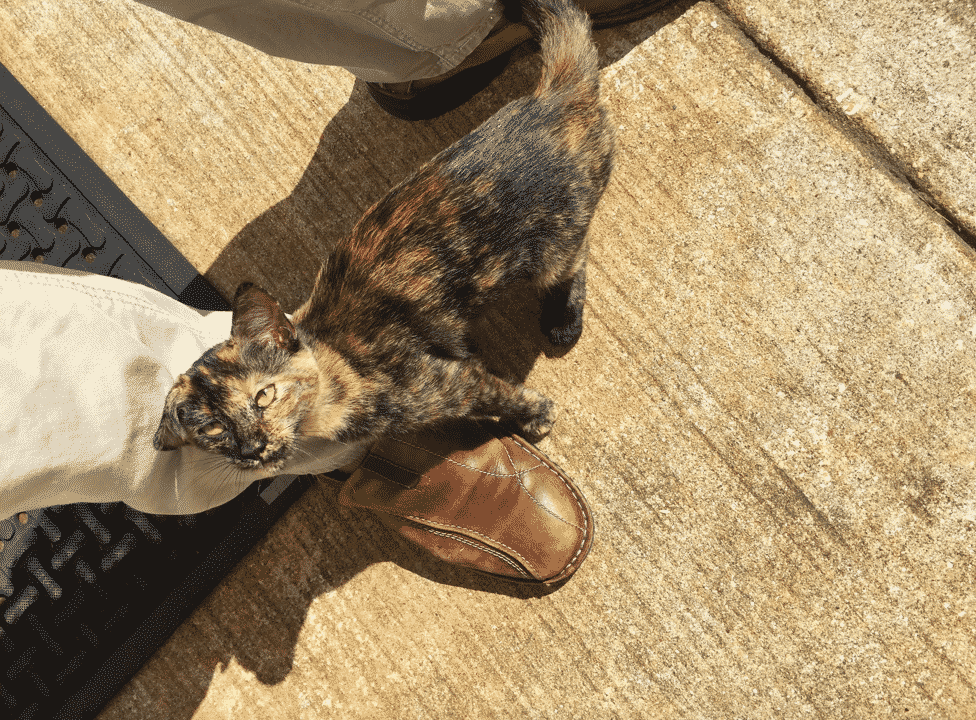 Wollstone had no idea where the kitten had come from and then, all of a sudden, she stopped picking at her burger and looked up at him. The kitten came out of the box and began to introduce herself to the man, rubbing herself against his legs.

The man never expected such a reaction… 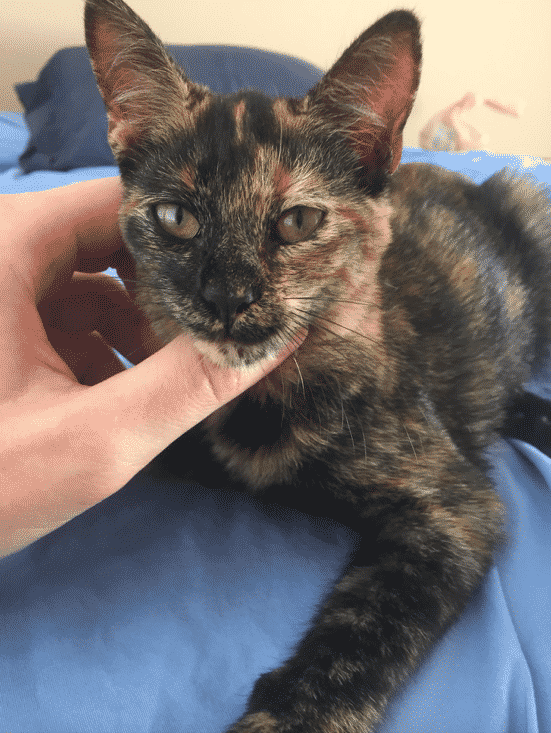 Looking up at the man with her beautiful yellow eyes, the kitten continued rubbing her face against his legs nonstop – she absolutely refused to let the man leave her. Could it be love at first sight?

Wollstone was also smitten as he began to fall in love with the adorable kitten and her fascination with him.

He knew he couldn’t just go into work that day. 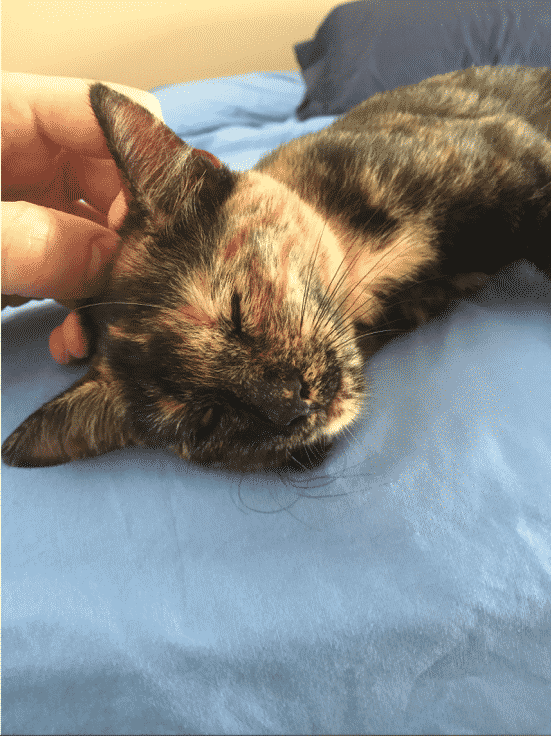 Wollstone couldn’t turn his back on the tiny kitten now, especially after such an engagement between the two. It was at that point that he decided to take the day off from work and figure out a plan to help out the kitten that so quickly put her trust in him. “She decided to adopt me so I took the afternoon off and brought her home,” he said.

However, Wollstone still had to figure out what his next course of action would be. 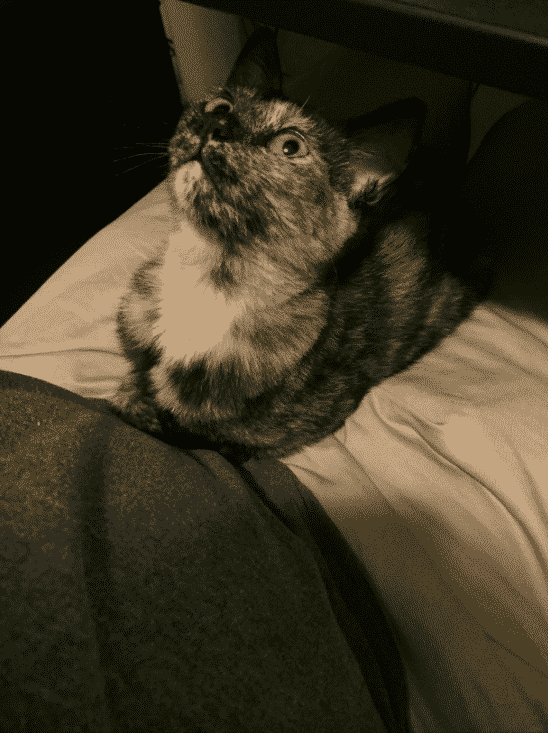 Wollstone decided that his next best move would be to take the kitten to a vet’s office. There she tested negative for FIV and feline leukemia. The vets assured Wollstone that despite the fact that the kitten was underweight and malnourished she was completely healthy.

So, what did Wollstone decide to do with this healthy kitten? 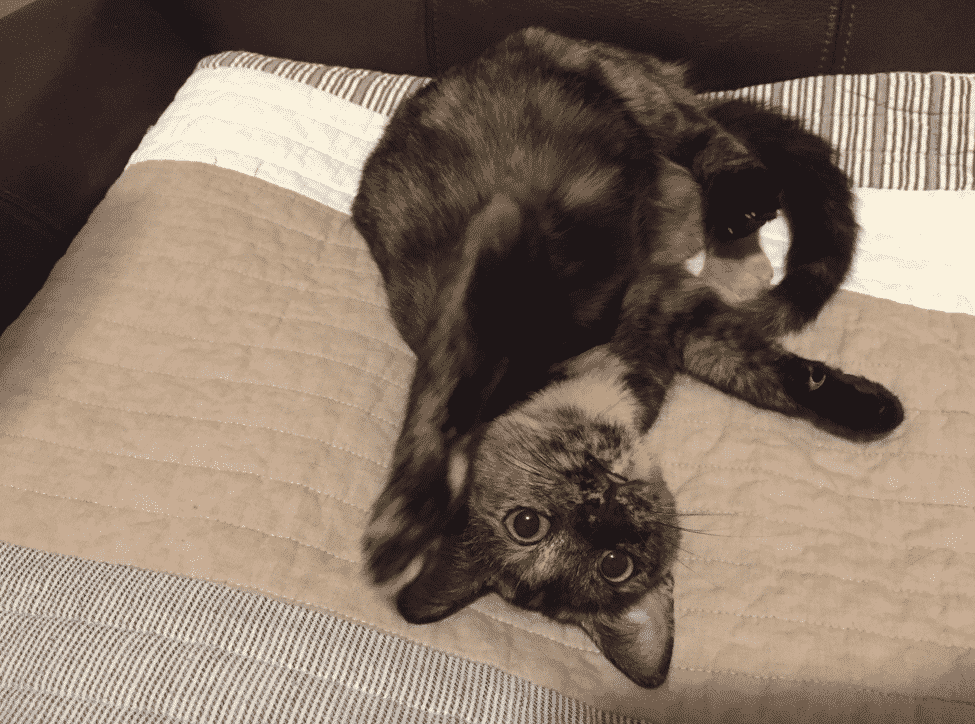 The vets then confirmed to Wollstone that the kitten was ten weeks old and although she was old enough to be away from her mother, she was still in need of extra care in order to overcome such a traumatic beginning. Wollstone took all of this information into consideration as he thought about what he should do. 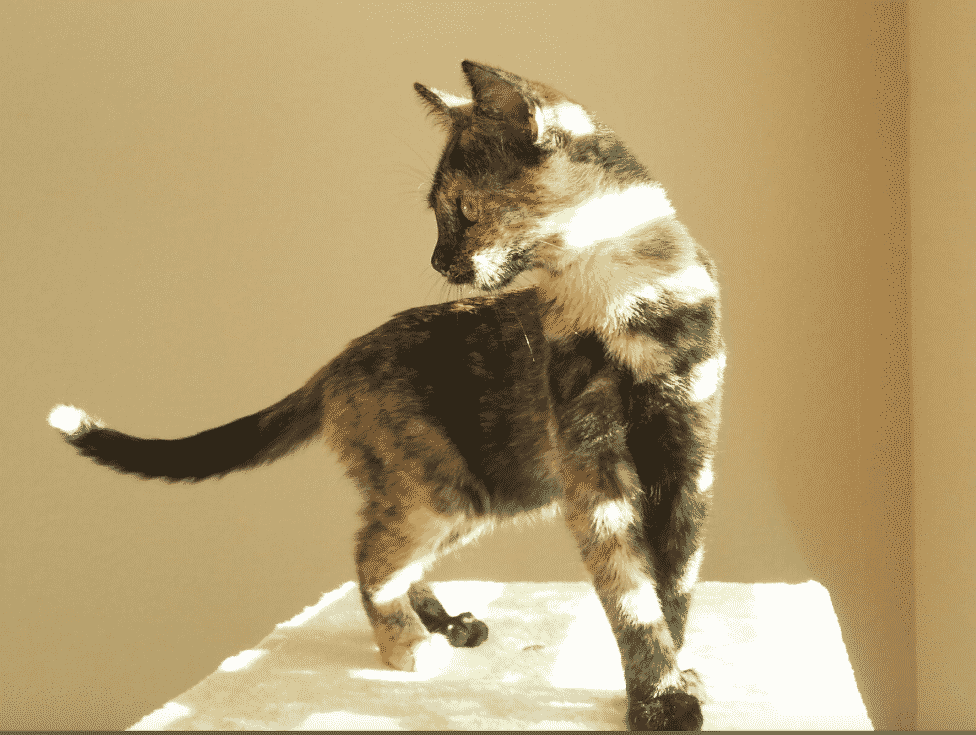 Finally, it was confirmed by the veterinarian that the kitten was not chipped. This meant that locating any potential owners would be pretty much impossible. Wollstone had finally heard and enough and knew what had to be done about this little kitten that fell in love with him instantly! 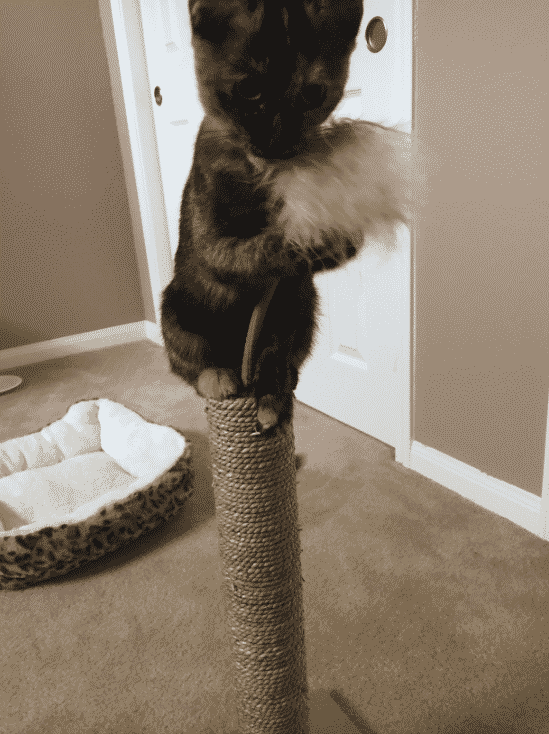 Wollstone decided that it was time to stop stalling and make the decision that would impact him and the kitten’s life forever. He took the kitten home and decided that she was his now. You won’t believe what he decided to call the little cutie! Check out the next adorable photo to find out. 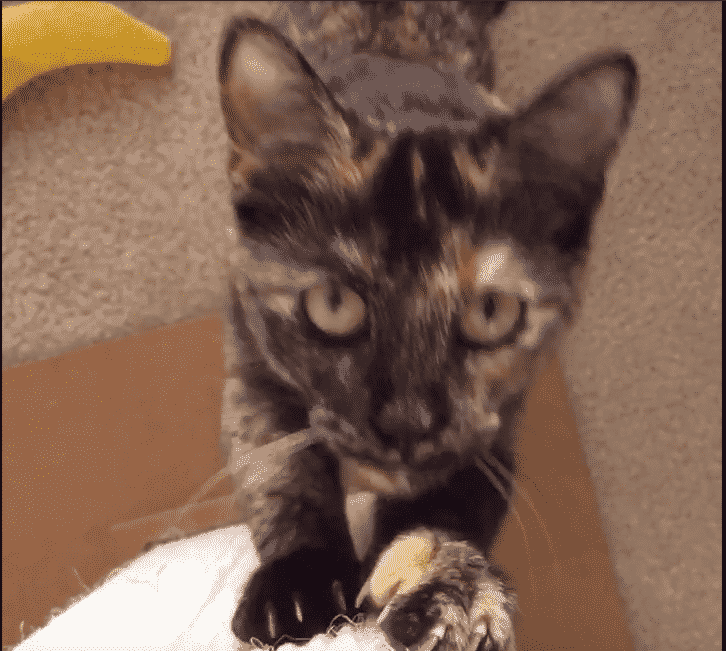 The scrawny stray finally had a home to call her home, but now Wollstone was left with the challenge of naming her. He already had a gorgeous dog named Ghost, so he followed the Game of Thrones theme and named the cutie, Arya, after the character on the show.

So do the pet versions of Arya and Ghost get along as well in real life as they do on the show? 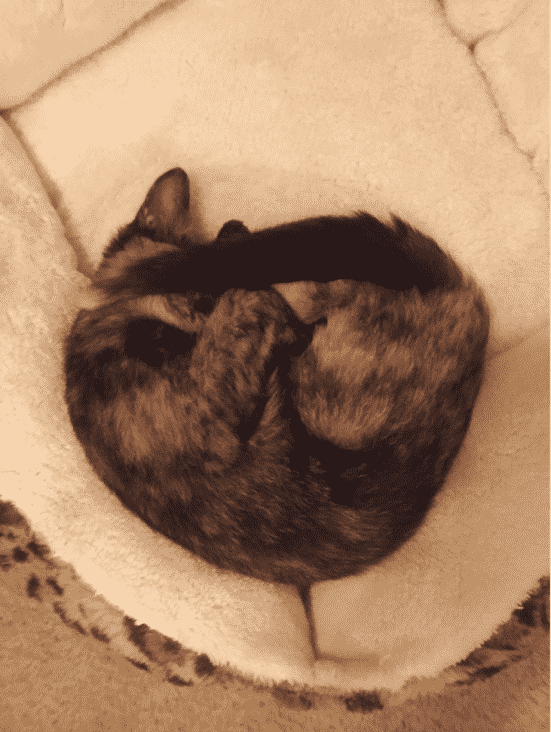 Arya quickly made herself at home with her new family. Take a look at this adorable photo of her cuddled up in her new bed. Still, Arya wasn’t completely satisfied with her cushion and you’ll be surprised by her favorite place to nap! You’ll fall in love with the next photo of her in her odd napping spot. 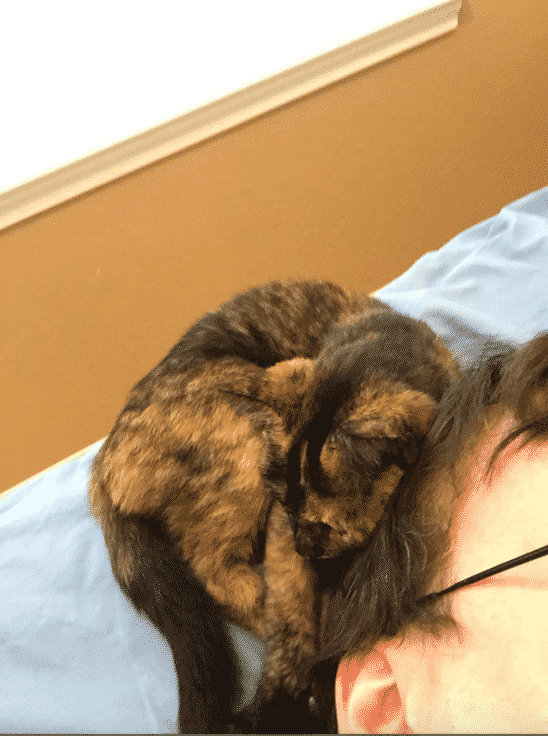 Even though Arya loved her new cushions, she was still very much in love with the man who saved her from a life on the streets. Here she is nuzzled up with Wollstone on his head! Even though Wollstone and Arya were bonding wonderfully, the same couldn’t be said of her and Ghost.

You won’t believe the ways that Arya torments him! 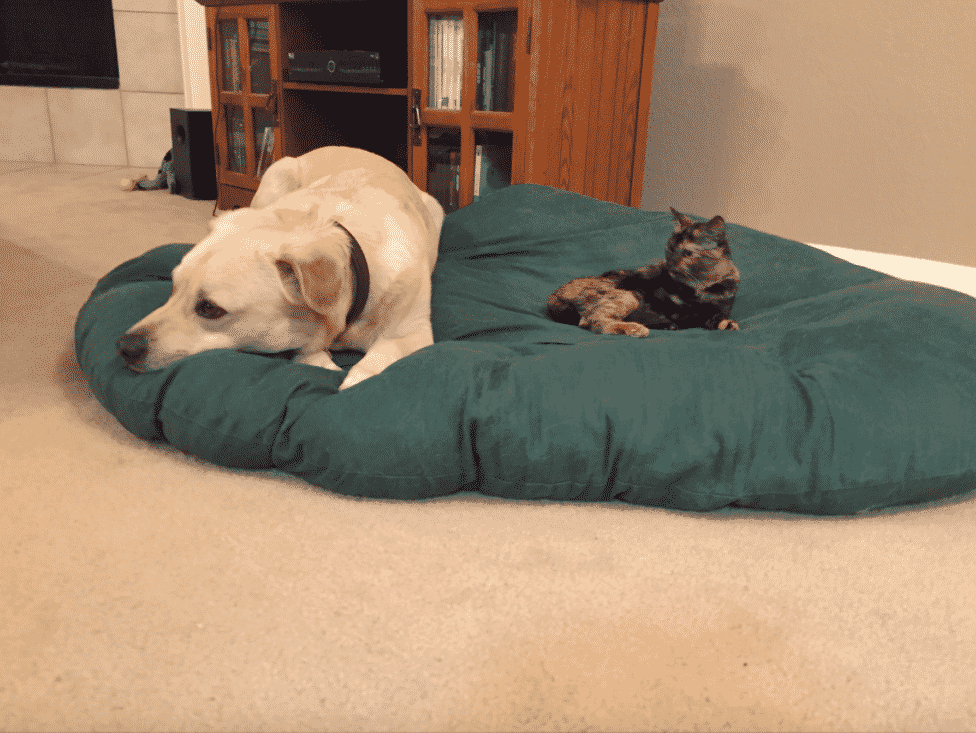 Arya has been known to steal Ghost’s bed and proclaim it as her own as well as using his tail as target practice for her hunting skills. Needless to say, none of this was ok with Ghost who was growing tired of the crazy antics of her new little sister.

So have the two managed to makeup? You’ll be surprised by what a few months of bonding can do for a relationship between two complete opposites. 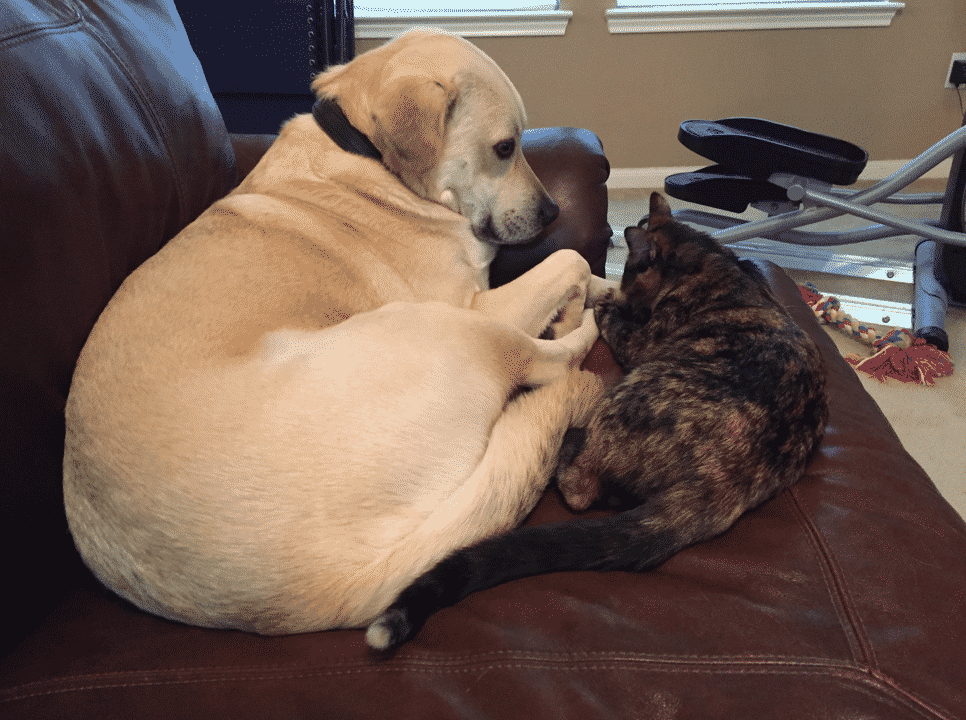 However, a recent update from Wollstone has left everyone feeling good.

“Ghost has gotten pretty good at detecting kitty traps at this point,” wollstone updated on Imgur. Arya has even settled down now that Ghost has been standing up for himself. The next photo of them together will blow you away! 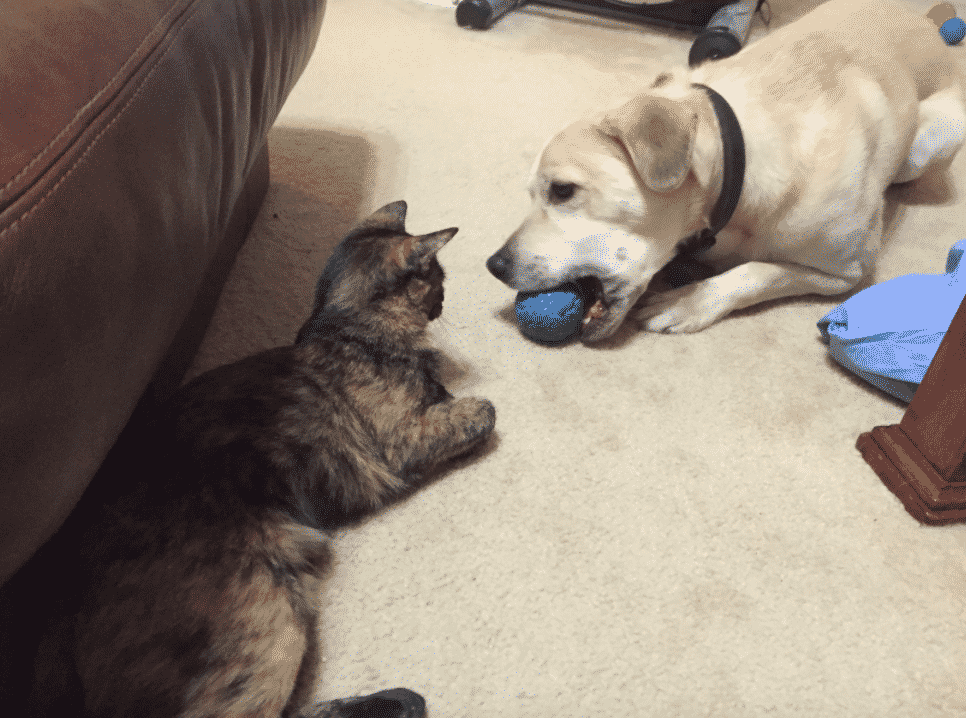 As the month progressed, Arya and Ghost got closer and closer. Just take a look at this adorable photo uploaded by Wollstone. The two of them are actually playing together – who would have thought? Wollstone has even stated that the pair are quickly becoming BFFs.

So many people on Imgur were asking for updates on the kitten that Wollstone started posted them more frequently. You won’t believe what Wollstone has to say about his feline friend. 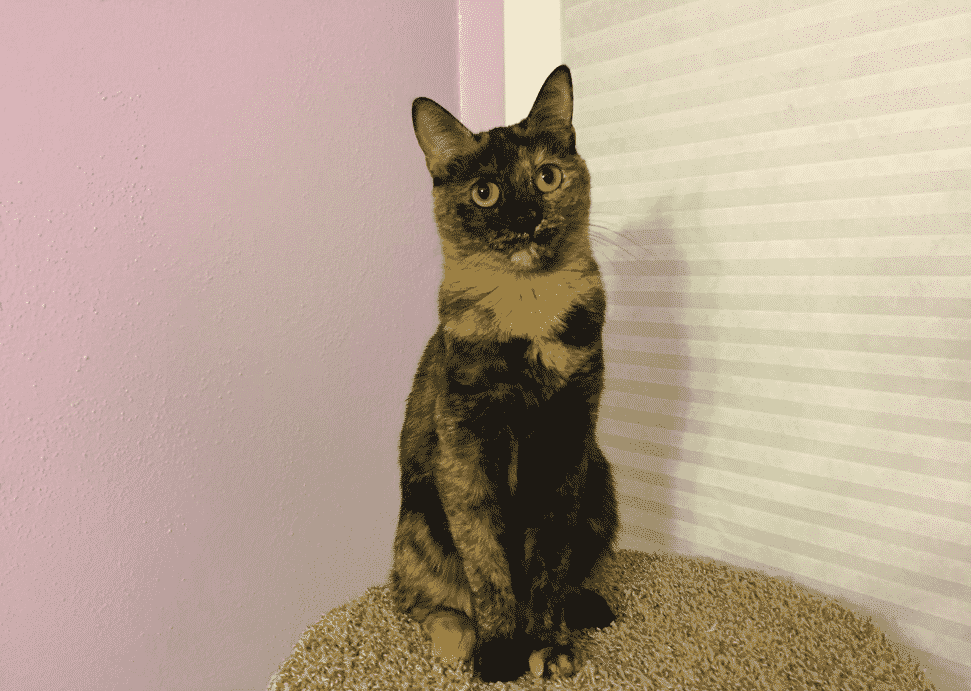 “Over a year later and halfway across the country, she’s still pretty tiny, but healthy and happy,” Wollstone cheerfully wrote on Imgur for all the users that kept up with the story. He added, “She still sleeps in this same bed every day.”

You’ll chuckle at the next comment Wollstone made about Arya and her relationship with Ghost. 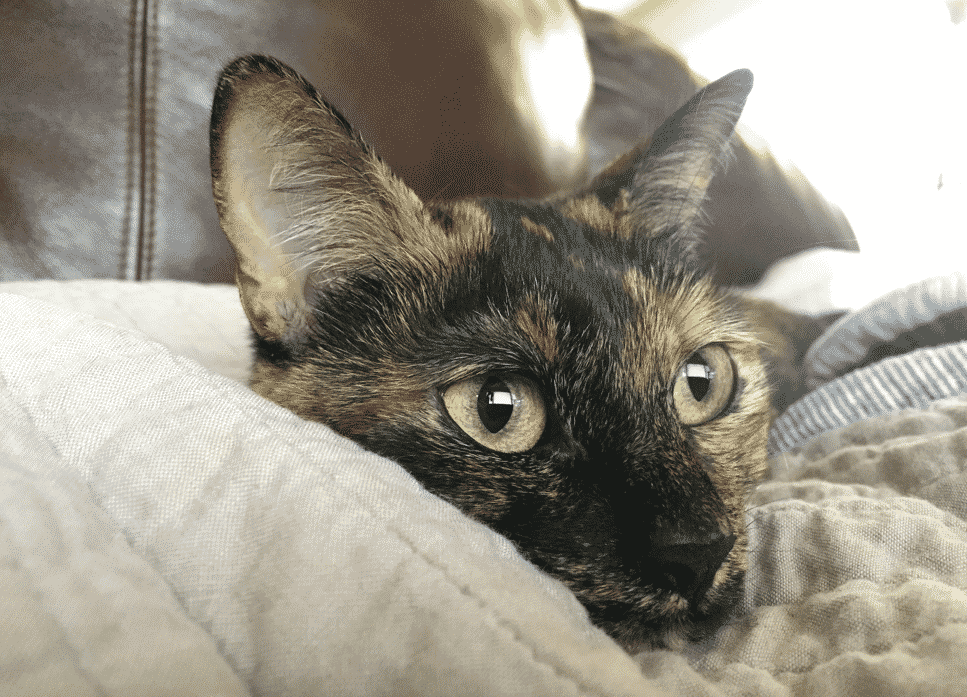 “Sometimes she gets murder eyes. She’s decided that the dog is okay and doesn’t have to be eliminated,” Wollstone happily joked while writing his update on Arya and Ghost’s relationship. “She’s also extremely acrobatic.”

Wollstone’s selfless action has gotten him quite a lot of online attention you won’t believe how many people are invested in the events. 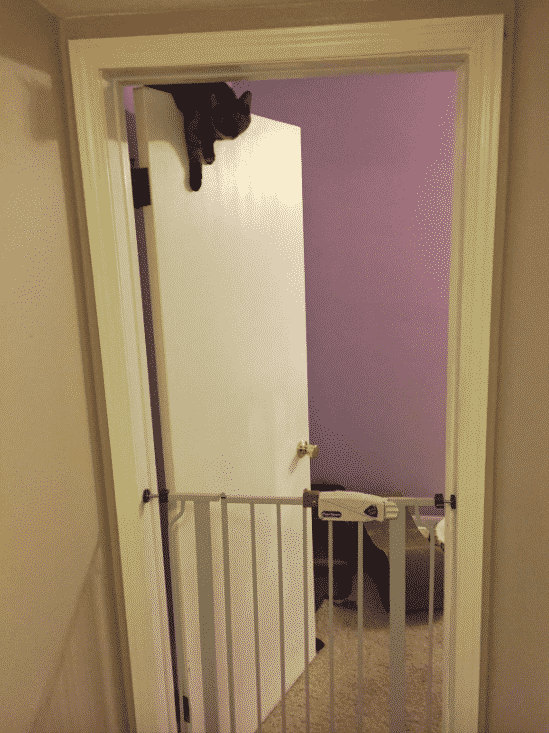 More than 90,000 people have viewed Wollstone’s updates about Arya – can you believe it? Users have been keeping up with the story, in hopes of learning just a bit more about this unusual stray kitten that so easily fell in love with her now owner.

People have left some wonderful comments as well such as, “Lovely kitty. Thank you for making her life happy and secure.”

So does Wollstone feel like the hero that the Internet paints him out to be? 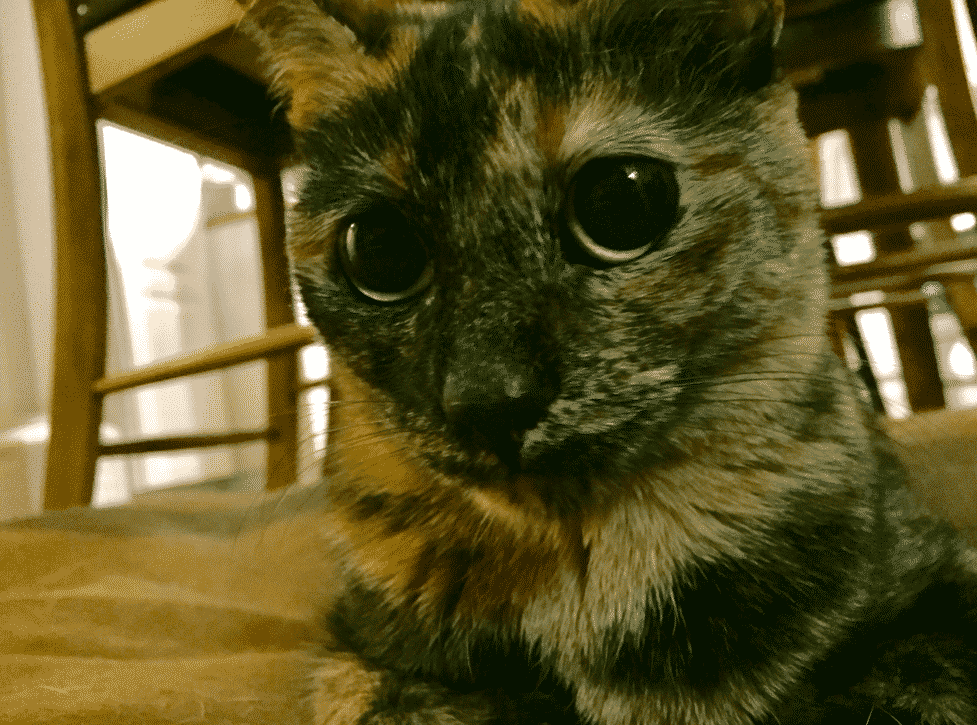 Despite saving Arya from a life on the streets, Wollstone feels that Arya actually changed his life for the better. He refers to her as the “best cat” and he is so happy that she stumbled into his life. It’s almost as if Arya knew that her and Wollstone were destined to be together.