Actor Gary Sinise has been known for some pretty spectacular acting roles. However, these days, the actor has gotten far more involved in philanthropic endeavors. Recently, Sinise made dreams come true when he decided to fly out 1,000 kids to the most magical place in the world.

Gary Sinise is an American actor that is well-known for his supporting role in the 1994 film, Forrest Gump. Sinise has won an Emmy Award, a Golden Globe Award, a star on Hollywood Walk of Fame and has been nominated for an Academy Award. However, these days, he’s been less concerned with acting and more concerned with helping others. 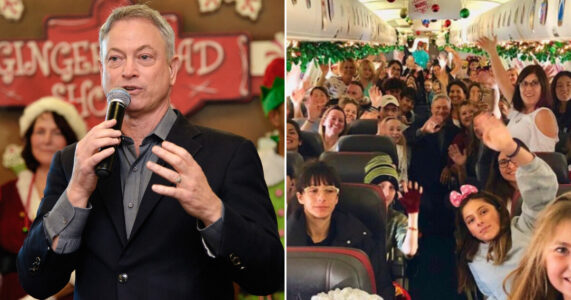 This year, Sinise decided to make Christmas extra special for those that needed it the most. He decided to treat 1,000 children of U.S. veterans to a Christmas gift that they’ll never forget. So what exactly did he do?!

For years now, Sinise has been engaging in a ton of philanthropic ventures. He has since founded the “Gary Sinise Foundation,” that works to advance, “honouring veterans, first responders, their families and those in need,” according to the foundation’s official website.

For the second year in a row, the organization has put together a trip that they call the “Snowball Express.” So what exactly is this festive trip all about? Well, the trip arranges for more than 1,000 children of U.S. veterans to visit Disney World over the Christmas holidays.

Sinise has even worked hard to arrange a special Santa visit for all of the children that head to the park. Overall, more than 1,700 people attended the trip to Disney World in Orlando, Florida. The trip has put a huge smile on the faces of all of these children.

“Each one of these children who are going on these airplanes have lost a parent in military services…either combat-related, or illness, or unfortunately suicide sometimes…we wanna take care of these kids and make sure they know we don’t forget,” Sinise said in a public statement.

Sinise went on to explain that with the large amount of people flying to Florida they needed to take extra measures to make sure everyone got there safely. “In total, about 1,750 people from 15 locations across the country board the “Snowball Express” on their way to a five-night vacation in Orlando, Florida.” You won’t believe how many planes it took!

For this year’s festive gathering, it took 15 planes to get everyone to Orlando. In fact, the kids managed to make headlines when they all stopped at a layover in Nashville. A video that a woman posted onto her Facebook page quickly went viral.

Jen Tringale posted a video onto her Facebook page when she noticed something amazing happen at the airport that she was in. “I witnessed an international airport come to a complete stop today,” she wrote. She continued to paint the picture for everyone…

“At the Nashville airport I walked out into the concourse to this scene.” American Airlines “was flying a plane full of children who had lost a parent in combat to Disneyworld on an all expenses paid trip and they threw a party for them at the gate.”

At one point, Jen was completely taken aback when everyone began to break out in song. “But when they announced them over the loud speaker and they lined up to board the plane the whole airport literally stopped and sang the national anthem with military present in salute.”

Jen also explained that it was an emotional experience to see everyone burst out into song and honor these kids who lost a parent. “Most every person standing around, myself included was bawling at the sight of these kids and spouses who have paid so great a price for our country.”

“To see all of this at Christmas time was so humbling. Seeing the general public in an airport stand still to honor these kids was simply beautiful.” This isn’t the first time that Sinise has gone out of his way to honor America’s veterans.

Last year, the 63-year-old visited Americans stationed in Iraq and Afghanistan for Christmas. “Greetings from Troops, I’m at the dining facility at Bagram Air Base Afghanistan. Thank you to these brave men and women for your service to our country,” he wrote on Twitter.

Sinise’s organization also teamed up with “Gold Star Children,” another non-profit agency in America that works to raise public awareness about the struggles of veterans’ families. Together, the two organizations managed to plan out the trip for the children.

When Sinise learned more and more about the organization, he knew that he wanted to partner up with them. “The most important thing about this (the Snowball Express) is that these children don’t feel alone. There’s a lot of healing and a lot of bonding and a lot of friendship that goes on that helps them through the rest of the year,” he explained.

Outside of the Snowball Express to Disney World, Sinise’s organization helps out veterans in many more ways. His foundation offers a suicide-prevention hot line for soldiers and their families. His organization also advocates for veterans with the government.

These days, Sinise has also authored a book. In February 2019, his first book, “Grateful American,” will be published. In the book he talks about how he found his calling to help his country and others.

Through Sinise’s hard work, many kids and families have been getting a ton of joy during their Christmas season. It is wonderful that there are Americans out there that are willing to pay it forward in the way Sinise has.