Cop Notices Family Is Not Able To Pay For Groceries At Walmart, But His Reaction Shocked Everyone

Sometimes it can be easy to become cynical with the way the world is. However, every once in a while a kind act will take place that restores our faith completely. When one cop was working the security at Walmart, he noticed that a family had come by that was unable to pay for all of their groceries. As the family turned to leave the store, the cop did something that surprised everyone. 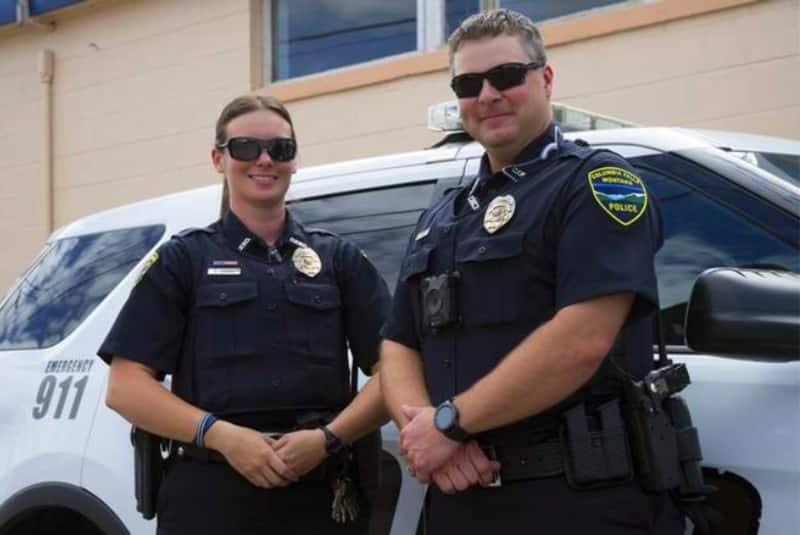 Lately, police officers have been getting a lot of bad press in the news. However, recently one police officer decided to shine some light on how wonderful they can be. You’ll never believe the situation that unfolded in a Walmart in Tennessee. 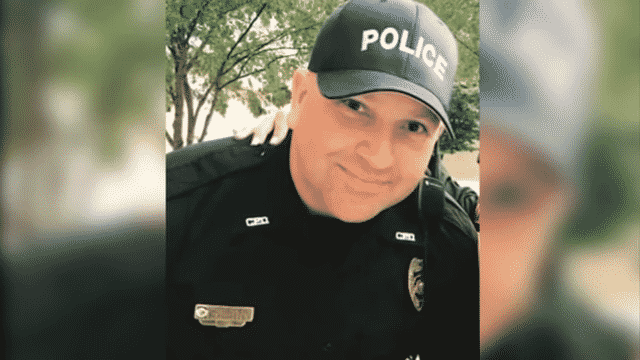 Cleveland City Police Officer Mike Kelly was working as a security guard for a local Walmart in his town. It was a typical day for the officer as he stood guard and did his usual rounds. However, he had no idea that this day would soon become a memorable one for him.

While working, Officer Kelly noticed one family in particular shopping in the store. The family consisted of a father and his four kids. Eventually, they made their way over to the self-checkout lane with their groceries. 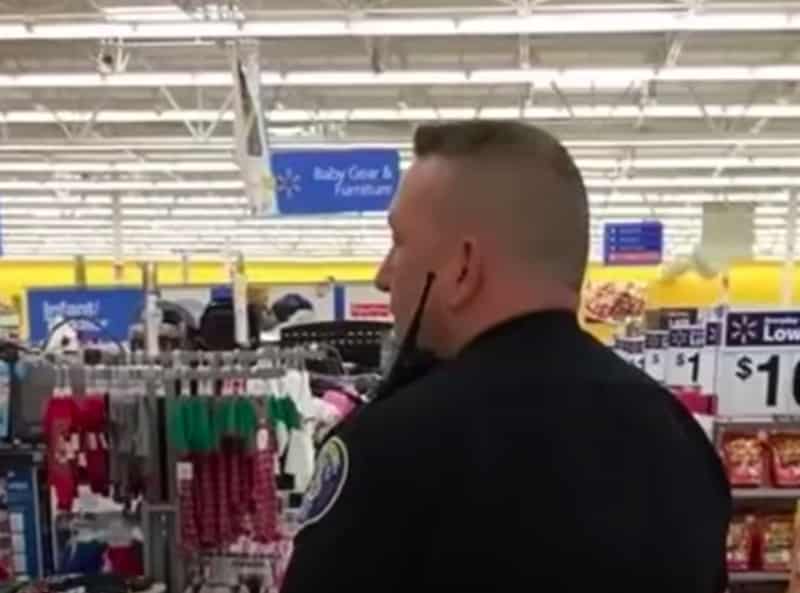 This wasn’t the first time that Officer Kelly had seen the family shopping at the Walmart. He noticed that they would come in quite often and the family always stood out to him because of how well-behaved the kids were. However, Officer Kelly was surprised by what he saw happen next… 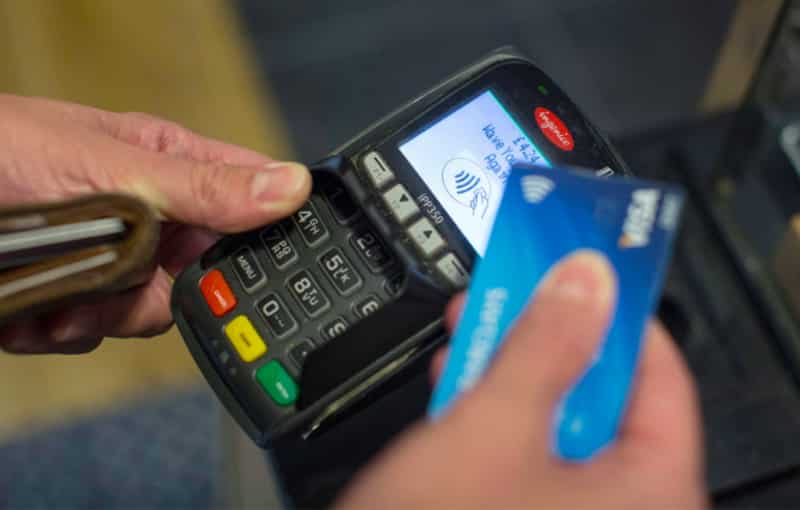 As the family finally finished ringing up their groceries, the father placed his card into the chip reader. However, the father’s card was immediately declined. Officer Kelly was pretty surprised to see this happen… 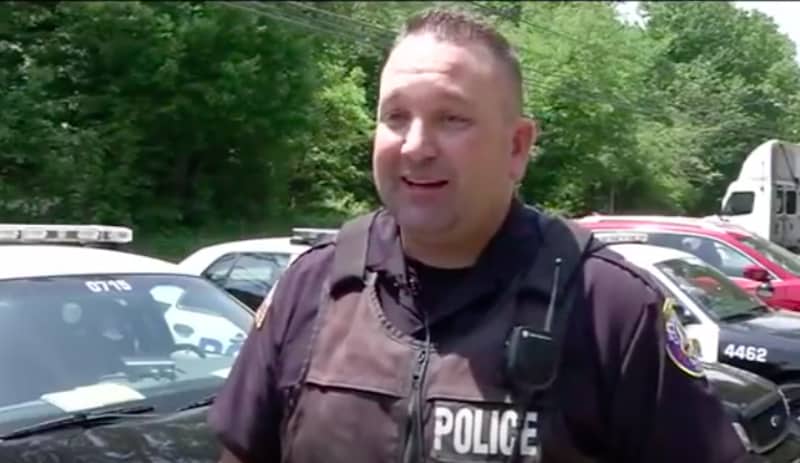 Kelly told Inside Edition: “They went to self-checkout, and he went to put his card in. The attendant says, ‘I’m sorry’ [and] they start walking out.” Officer Kelly watched the situation unfold and he knew he couldn’t stand idly by and let the family walk away without any groceries… 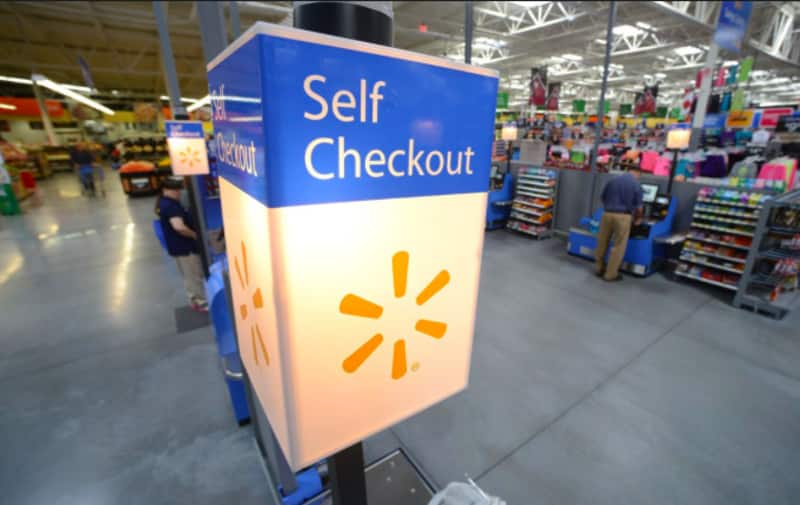 Officer Kelly saw the family heading out of the Walmart but he knew he couldn’t just let them leave. It was at that moment that Officer Kelly wondered if the family would have enough to eat if they left without the groceries. So Officer Kelly decided to step in and pay… 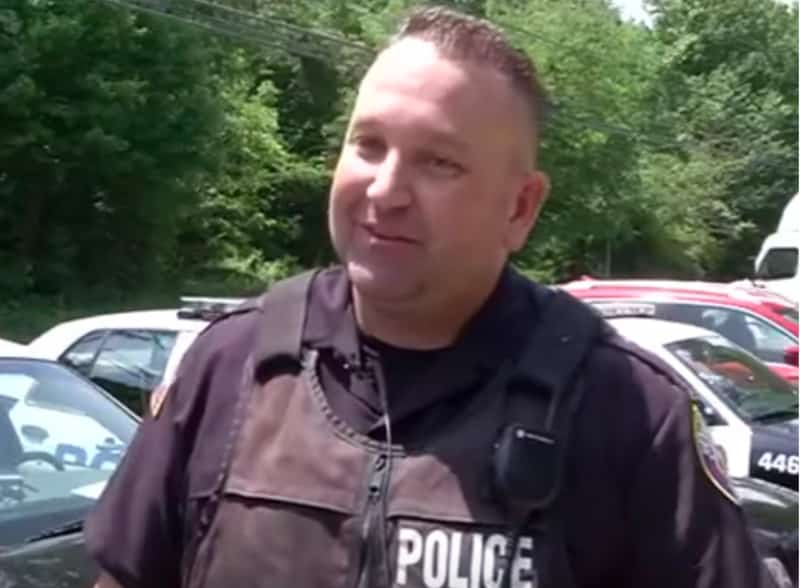 “The little girl’s face got me. Her eyes were welling up and it broke my heart. I felt God telling me, ‘I put you up here for a reason.’ I walked up to [the man] and said, “Please let me bless you today,” Officer Kelly explained. Kelly, however, had no idea that there was a bystander watching the entire thing take place. 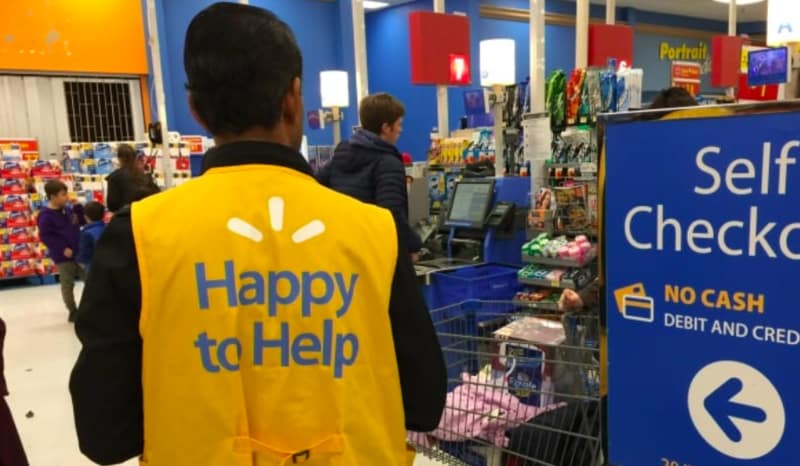 Jermaine Bowe was a bystander in Walmart that watched the event unfold. He saw Officer Kelly offer to pay for the groceries and he saw just how big of a difference this gesture made for the family. Bose decided to share the situation with his Facebook friends later that day. 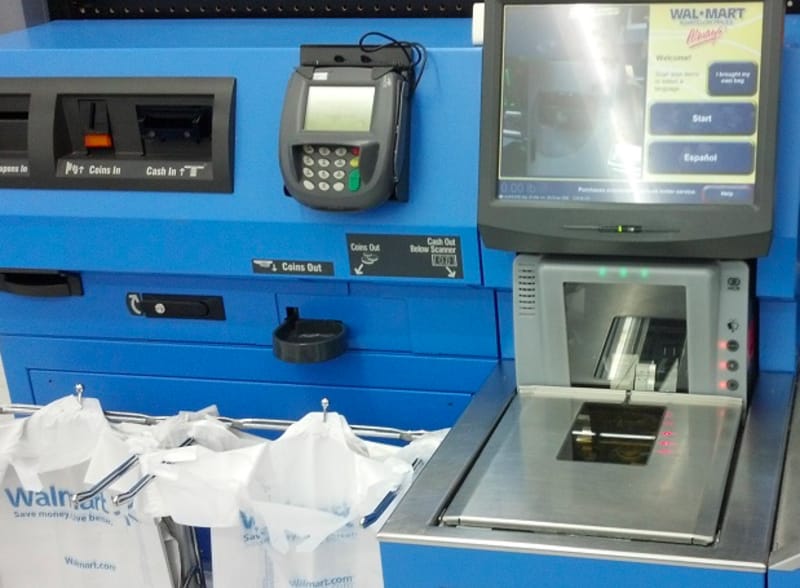 Bowe was touched by the gesture and decided to share the story in detail on Facebook. He also asked everyones help in identifying who the wonderful officer was. Soon enough, the department that Officer Kelly works for came across the post. 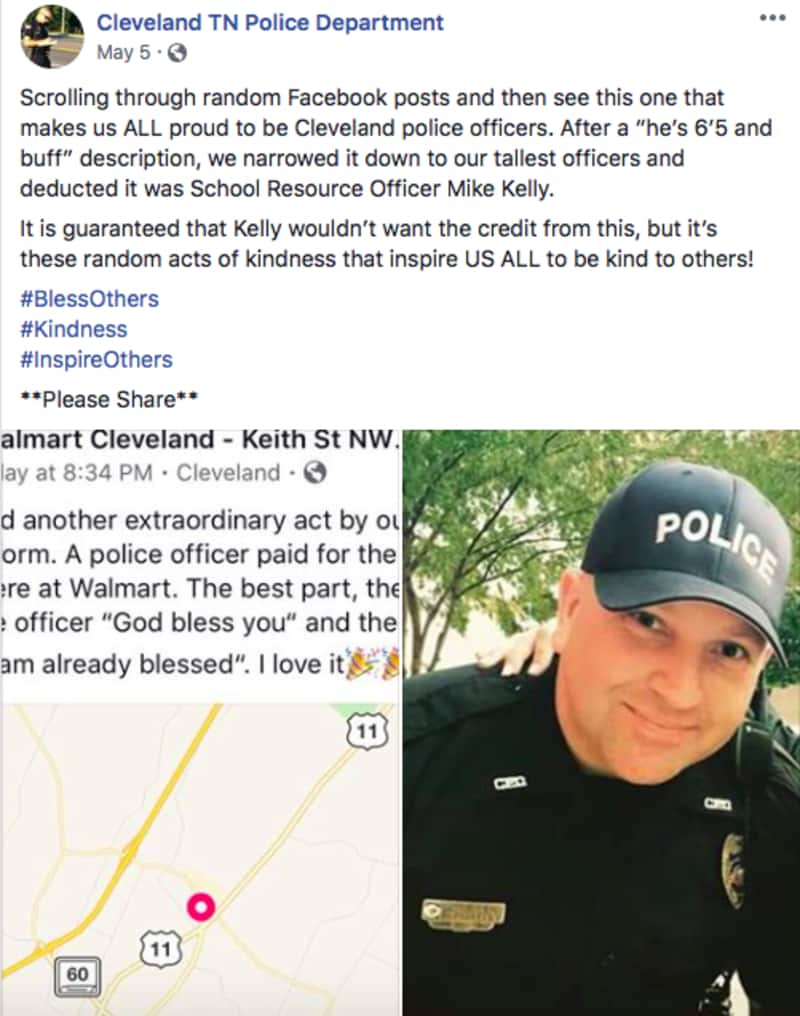 The department caught wind of the story and immediately recognized Officer Kelly. They decided to share the story on their own Facebook page. “Scrolling through random Facebook posts and then see this one that makes us ALL proud to be Cleveland police officers,” the department wrote. 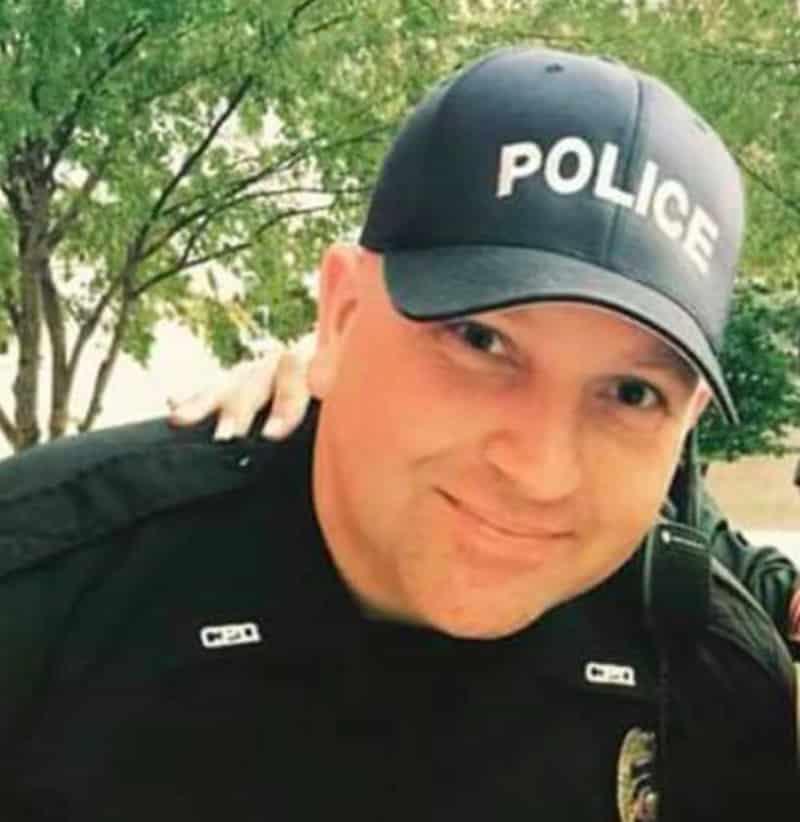 “After a ‘he’s 6’5 and buff’ description, we narrowed it down to our tallest officer and deducted it was School Resource Officer Mike Kelly.” Ever since Bowe and the department shared the story it has gone absolutely viral. Everyone was so happy to hear about the officer’s kind gesture. 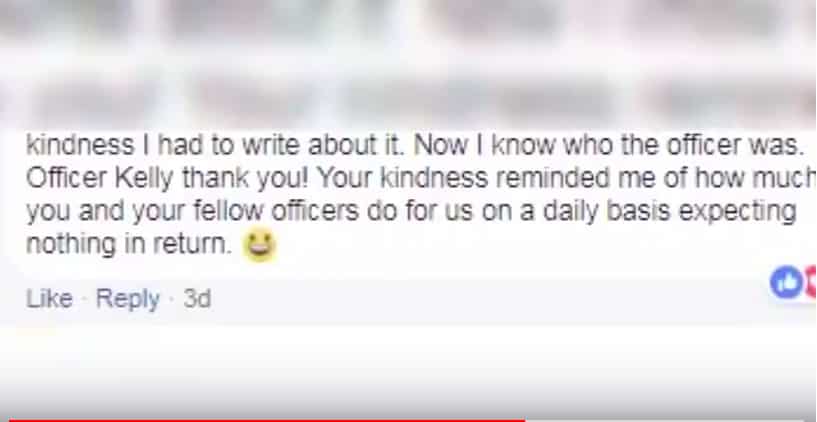 Many people from the community that know Officer Kelly personally began to chime in as well. Nobody was surprised to hear that Officer Kelly was behind this kind gesture.“I am not surprised, Mike being Mike exactly,” one person wrote. 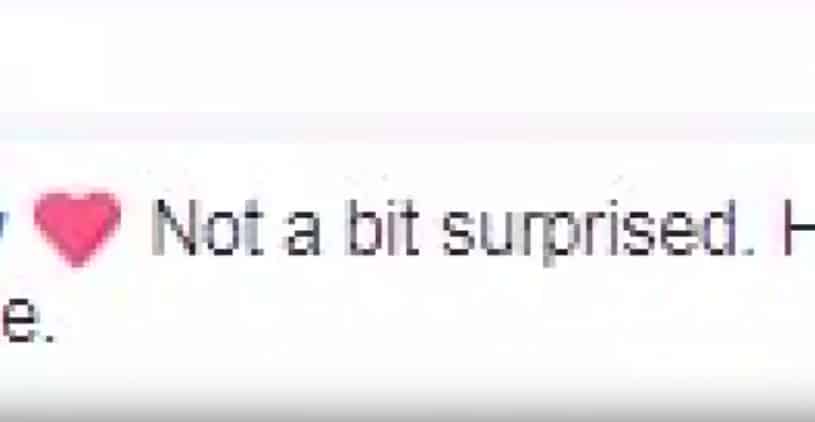 “Mike has always had a big heart, what a great guy!” another user wrote. “Not a bit surprised. He comes from a long line of good people.” The department then added another little tidbit to the post. 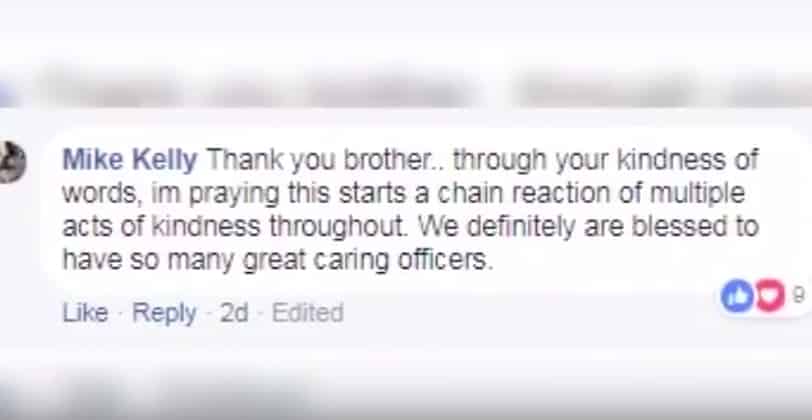 “It is guaranteed that Kelly wouldn’t want the credit from this, but it’s these random acts of kindness that inspire US ALL to be kind to others,” the department wrote. This isn’t the first time that an officer has stepped in to help somebody in need. In fact something quite similar just occurred in Texas this past July. 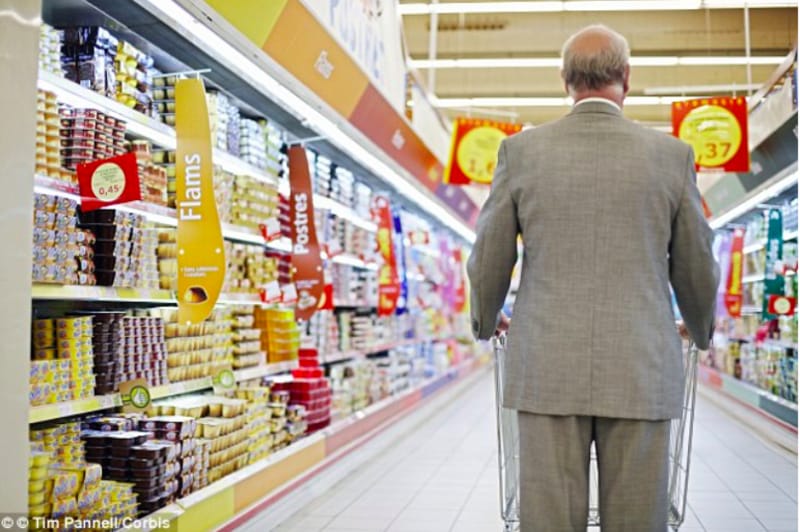 Back in July, a diabetic man in his 50s or 60s had gone grocery shopping for his food and medications. However, while unloading in the parking lot, the man had a diabetic episode. He collapsed and lost consciousness for a while. 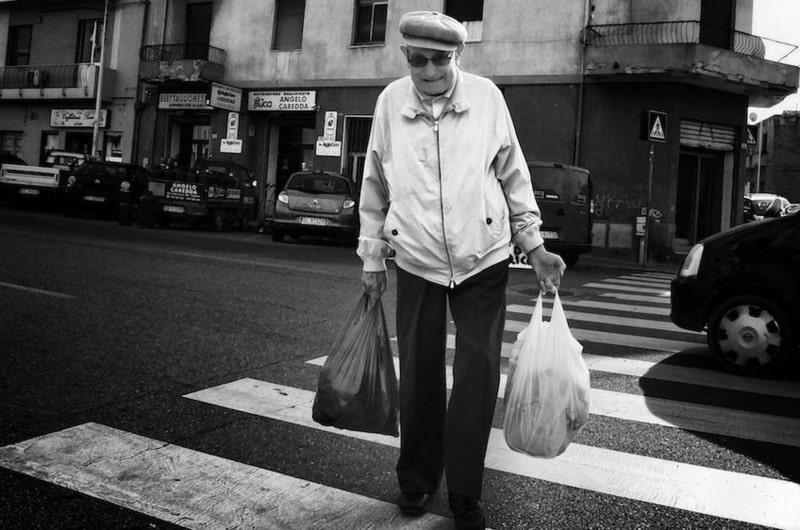 As soon as the man woke up from his episode he was shocked to find that all of his food and medication had been stolen. The man quickly walked over and approached the store’s security guard to let her know what had happened. However, what happened next completely took him by surprise… 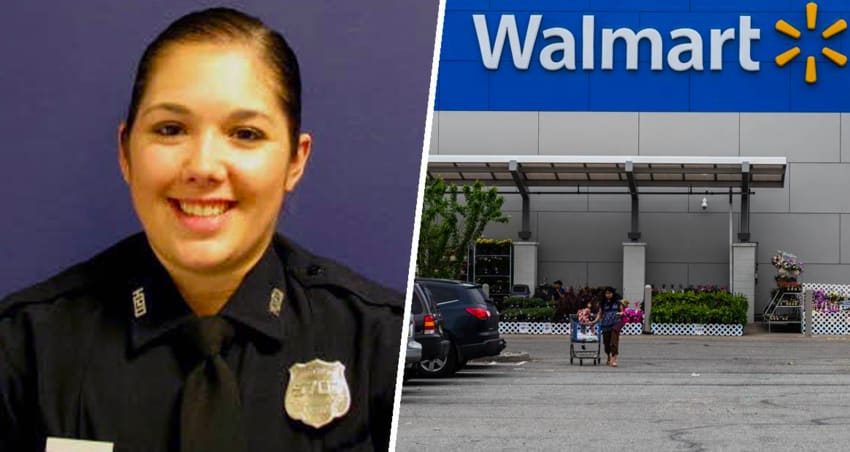 The man was surprised when Officer Koryciak offered to repurchase his medication, essential items, and $25 worth of food. She was heartbroken for him when she found out that someone had stolen from him when he was at his lowest. However, there was also another reason she was so touched by his story. 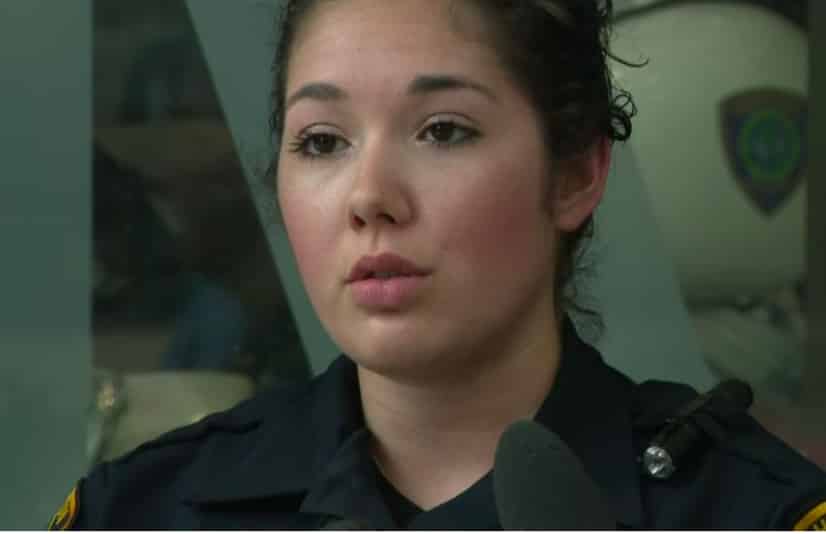 Officer Koryciak later explained what else had prompted her to repurchase all of the items for the man. She explained that diabetes runs in her family and she felt personally touched by the man’s bad experience. “I would do it again in a heartbeat,” she said. 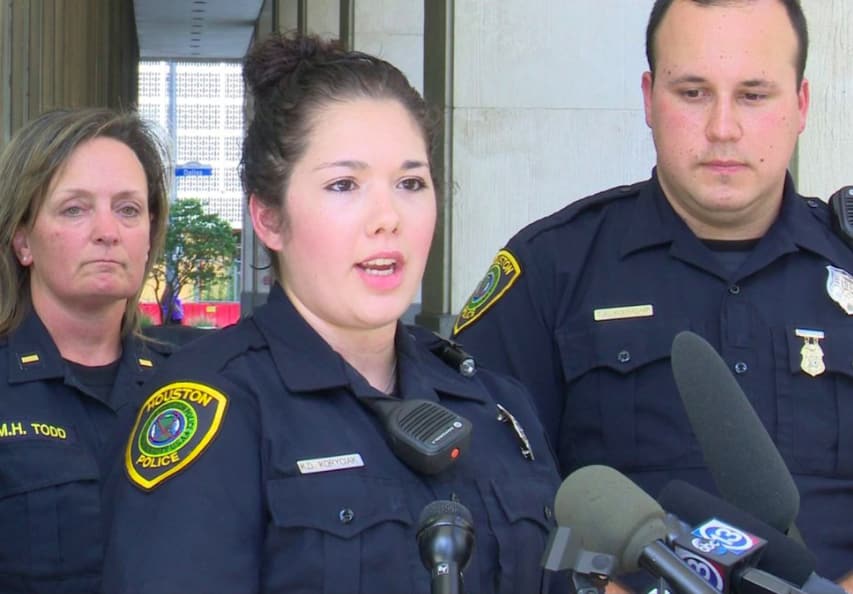 It seems that no matter how hopeless we can feel about others, there are still many wonderful people out there. These two amazing police officers went out of their way to help out others when they were in need of it the most!