Even experienced travelers can get jaded after a while on the road. Throngs of tourists and travel exhaustion can make you feel like you’ve seen everything the world has to offer. This is not only false, it overlooks some of the world’s most remote, dangerous, and distinctive places. These thirteen places are some of the strangest and most amazing places to go. 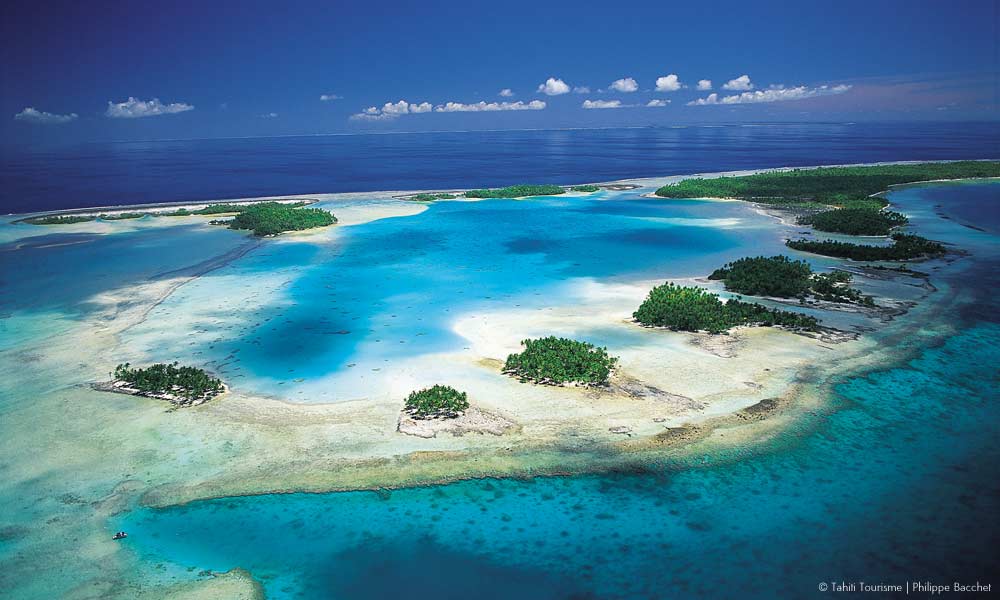 A journey to French Polynesia is not complete without exploring the spectacular sealife at Rangiroa. Nicknamed The Aquarium, this snorkeling spot is located just a five-minute boat ride from Rangiroa’s main villages, Avatoru and Tiputa. It is known as the world’s largest natural aquarium. The area is secluded and contains a lagoon that is abundant with fish and sea life. Unlike other areas of Tahiti which offer mountain views, Rangiroa is flat and provides amazing horizons on all sides, as the lagoon and sky blend seamlessly into one. 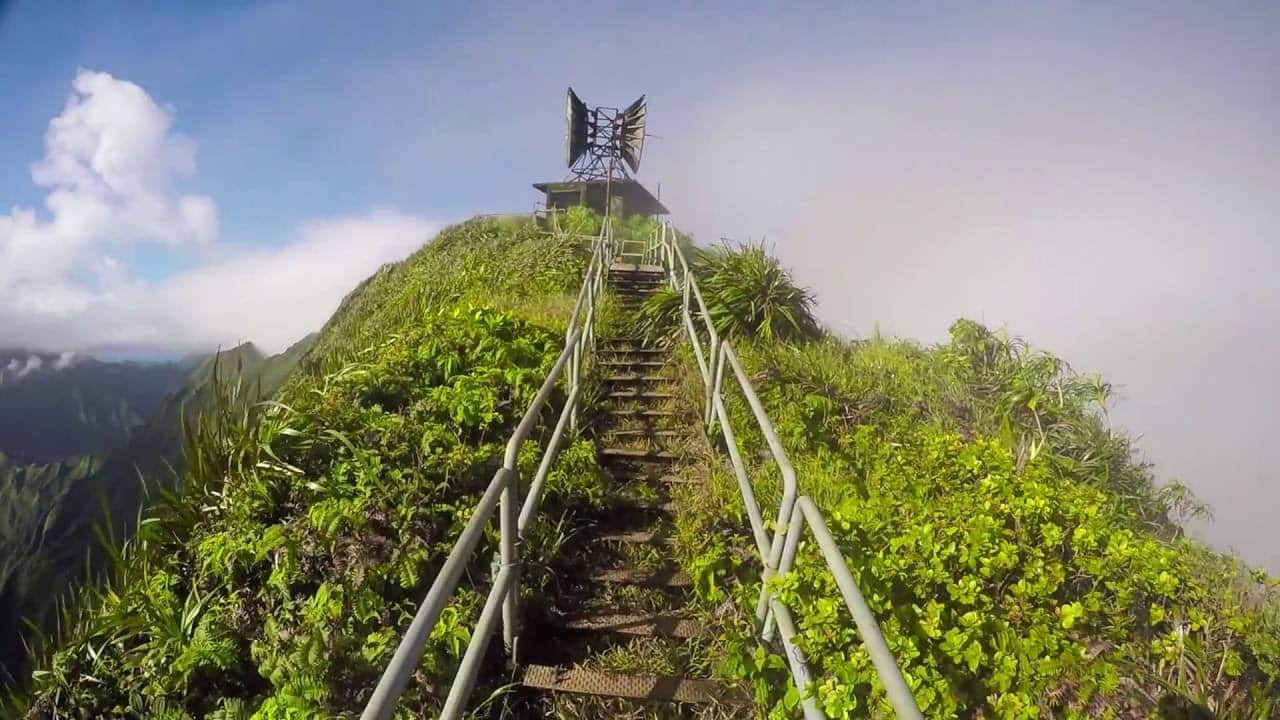 A large staircase looming above Oahu lights up the sky with 3,922 steps. The area is named “Haʻikū” after the Kahili flower. The stairs date to 1942, when the Navy needed to be able to communicate with their ships operating secretly in the Pacific Ocean.The solution was to climb to the top of the mountain and then install antennae and a radio station. First the steps were merely a ladder. Later, they built wooden steps before finally installing a cable car for easy access. When the Naval base was decommissioned in 1952, the wood steps were replaced by metal.

For several years, the Haiku stairs were open to the public. However, in 1987, concerned about the decaying stairs, the government closed them to the public. Nevertheless, people risk a trespassing arrest every year in pursuit of the great climb. In 2014, six people were arrested, and 135 more were given citations for climbing the mountain stairs. 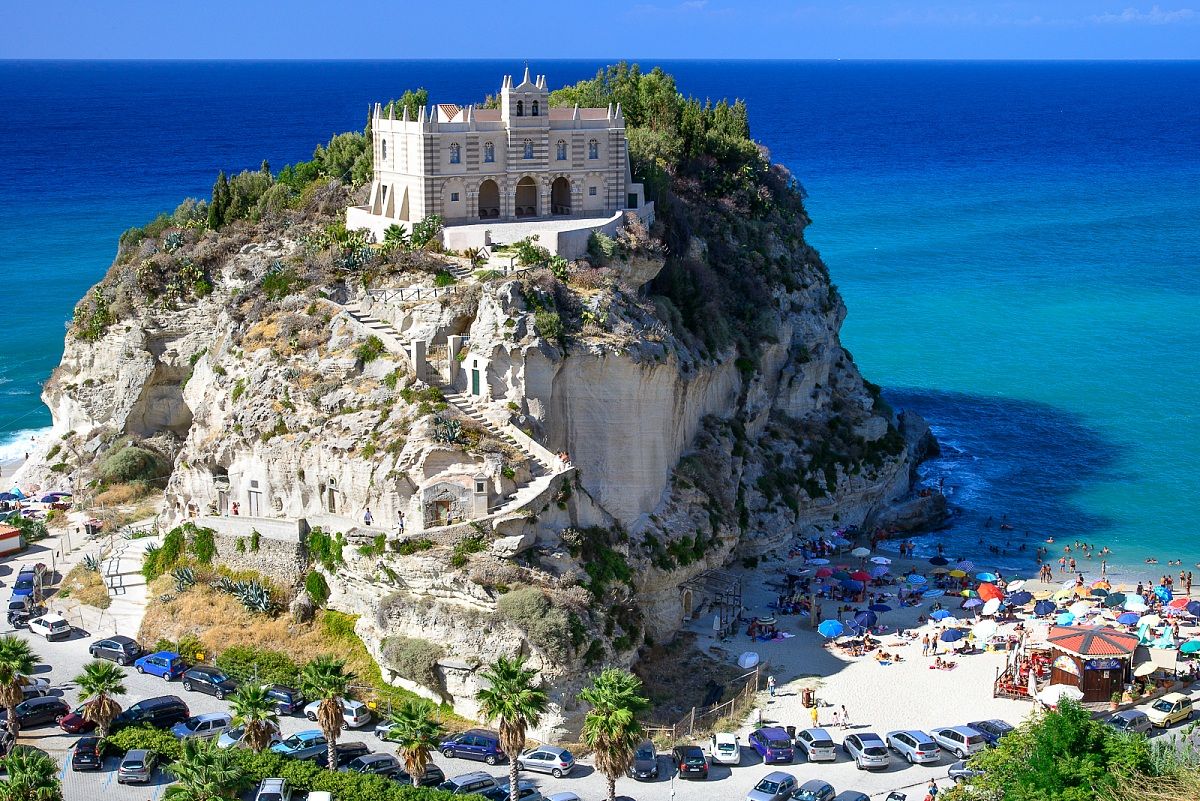 This secluded monastery is perched high above the breathtaking coast of the Tyrrhenian Sea, which is also known as the “Coast of the Gods.” Santa Maria dell’Isola is a monastery built in the 4th century that can only be apprached by climbing the steep steps carved into the cliffs. The ancient monastery started life as a simple church on its own island, but over time silt filled in the water and created this steep mountain. During the Renaissance, it was transformed into a spectacular cathedral. Although this was destroyed by an earthquake in the early 20th century, it was completely rebuilt again. Tropea has been witnessed to many important events in history, and mythology also says that Hercules once stood on the Coast of Gods and made Tropea one of his ports. Legend says the area is protected by the Virgin Mary. 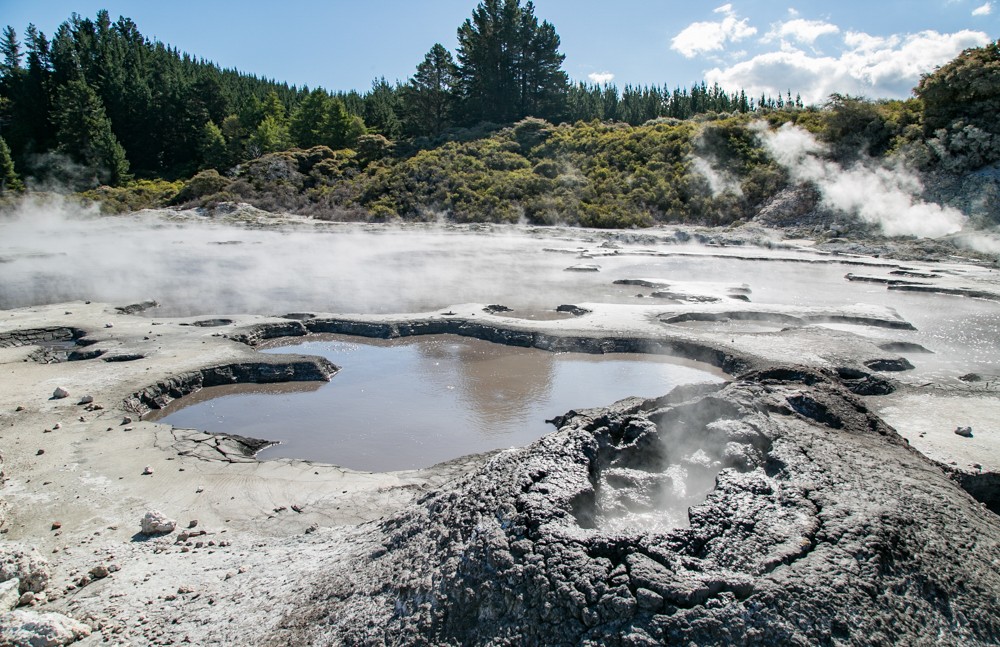 Rotorua is famous for its volcanic activity, and this has created some fascinating hot springs, pools, geysers, terraces, and mud pools. Intense geothermal hot springs in Rotorua provide scorching hot pools where locals bathe and swim even in the coldest months. The many hot springs also merge with rivers and cold water streams, making it simple to cool down after a hot soak. Visitors to Rotorua can also experience the famous Pink and White Terraces which had been lost to the world after the 1886 Tarawera Eruption. The terraces are visible once again, making this a one-of-a-kind trip. 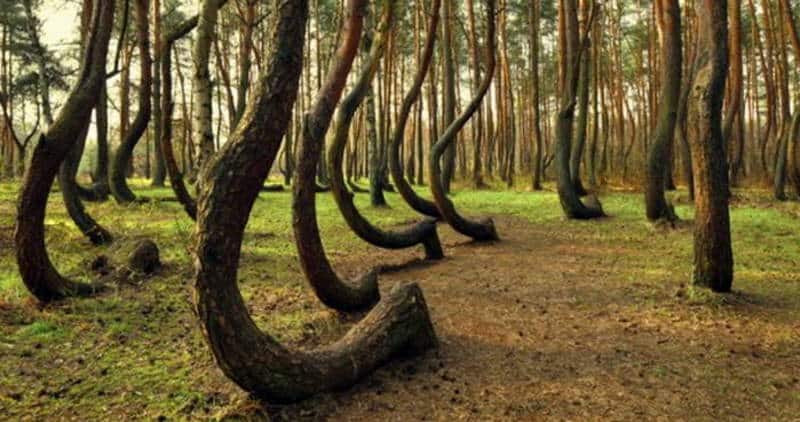 Just outside of the western Polish city of Szczecin is Krzywy Las, which translates in English to the Crooked Forest. This amazing sight is one of the natural world’s unexplainable anomalies. Dozens of pine trees were planted in the 1930’s, but as they grew, the all became crooked. The reason for unusual find has not been conclusively established. Some people suggest that they are responding to a unique gravitational pull found in the area, while others believe that the trees were stunted during a particularly harsh winter snow storm.

Wisconsin’s Apostle Islands were probably named by Jesuits who immigrated to the area. The Jesuits had a practice of giving holy names to the new places they encountered. Fur traders may have been the first Europeans in the area, creating a village from the money they made in the burgeoning fur trade. These 21 islands in Lake Superior contain many plant species which are endangered or obsolete in the rest of the world. They also have exciting river caves, with their amazing limestone rock formations forming icy sculptures in the cold conditions. There are six lighthouses to explore in the area, plus an abundance of kayaking, hiking, and remote camping on the beach. 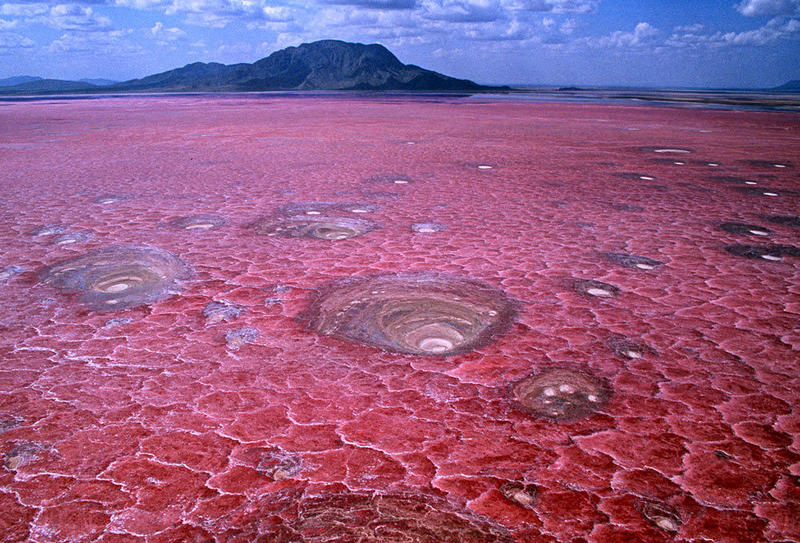 Lake Natron is a mineral-rich soda lake in northern Tanzania, near the border with Kenya. The lake is mostly alkaline, and the combination of soda and salt has a deadly impact: it causes animals to calcify suddenly. They dry perfectly preserved. The red waters make it look like the water is running with blood. Despite these conditions, the area flourishes with thousands of flamingoes. Humans can visit the lake, but if they touch the water, they too can be killed instantly.

6. SVALBARD, AN ARCHIPELAGO BETWEEN NORWAY AND THE NORTH POLE 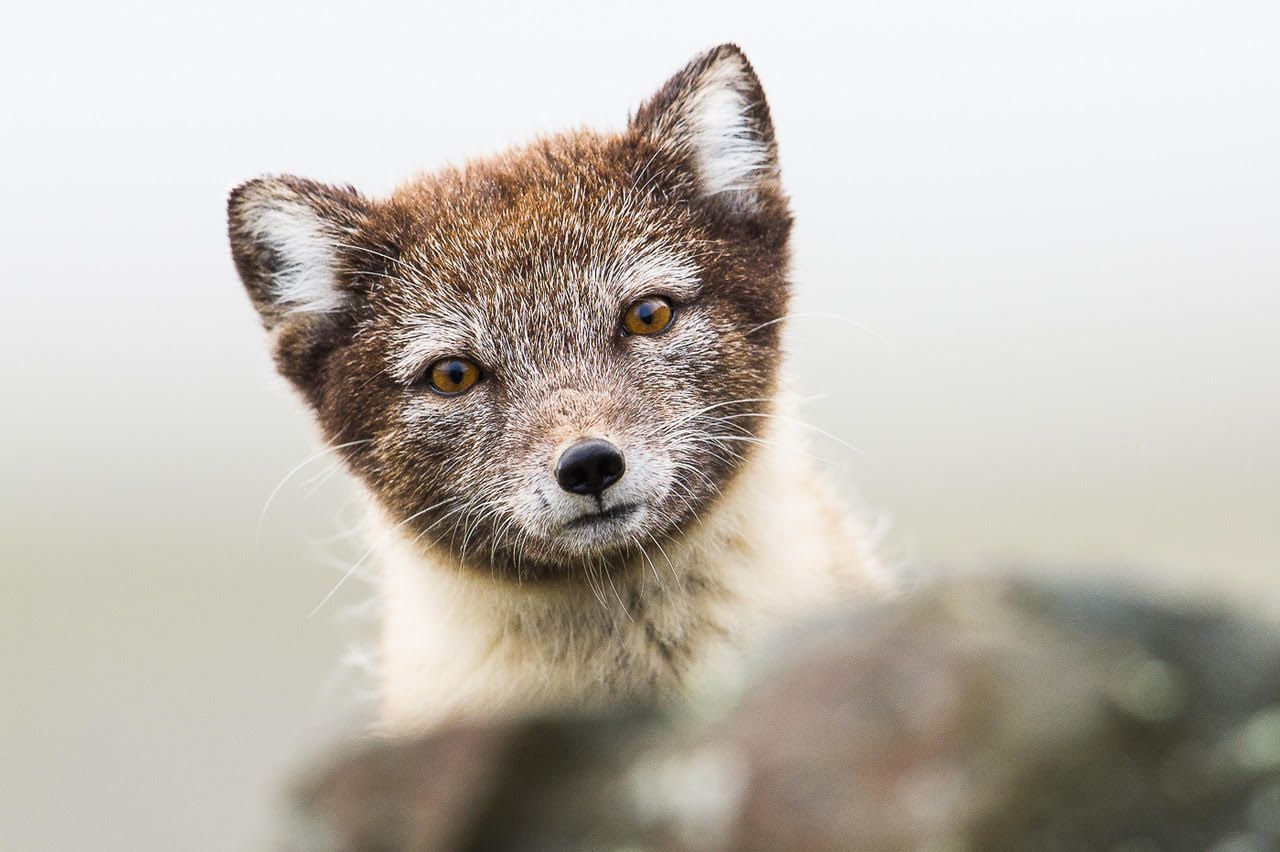 Halfway between Norway and the North Pole sits Svalbard, one of the greatest places left in the world to view Polar Bears in their natural habitat. Svalbard is a Norwegian archipelago that is also home to the Arctic Fox, which is one of the only species who can live in temperatures as low as -50 celsius. Svalbard’s endangered walruses were once down to just 52, but the population is now 3,800. The blue whale, the largest animal on earth, also swims in the icy seas. Despite its bone-chilling winters, visitors make the journey to Svalbard to experience spectacular views. In the summer, the sun doesn’t set for four months. The air may be cold, but it is technically classified as a desert because of its low-air humidity. 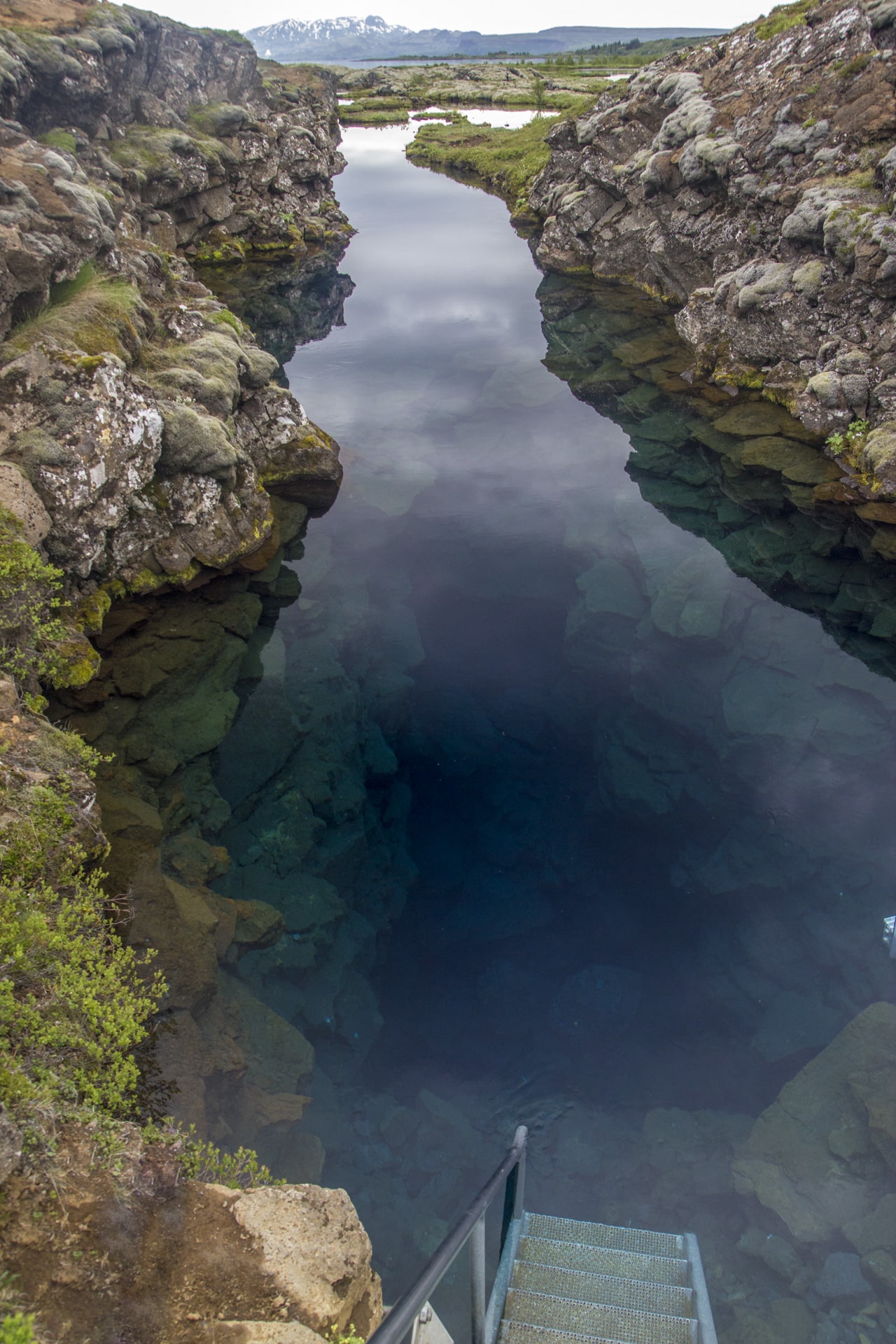 Want to walk between two continents? There is only one place in the world to do it: Þingvallavatn, Iceland. Þingvellir National Park is the only UNESCO World Heritage Site on the Icelandic mainland. Þingvallavatn played a major role in Icelandic history as the first ever location of the Icelandic general assembly. In 930 AD, over thirty ruling chiefs had met to create a commonwealth. This turned out to be a representative parliament, about 800 years before similar institutions were created in France and America. The Allthingi has been uninterrupted ever since. The word “Þingvellir” translates in English to “the fields of parliament.”

Geologically, the area is no less thrilling. It is the only place in the world where the Mid-Atlantic rift is actually visible above sea-level. Iceland is divided along both the North Atlantic tectonic plate and the Eurasian plate. As you descend into a valley, you can see the edge of North America. On the other side, you can see Eurasia.

4. THE GASSHO-ZUKURI FARMHOUSES OF SHIRAKAWA-GŌ AND GOKAYAMA, JAPAN 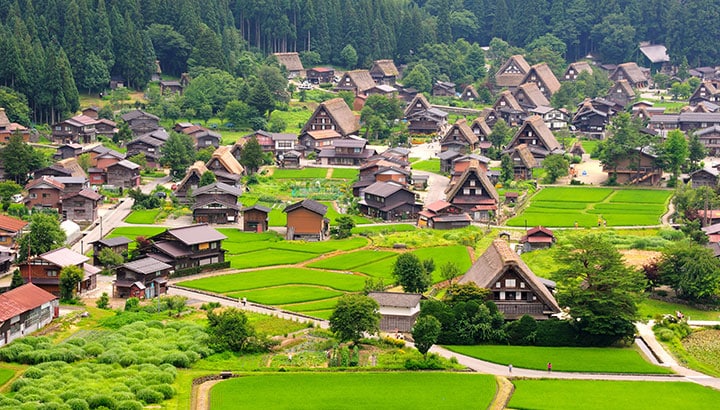 When people think of Japan, the first thing that comes to mind are Japan’s compelling and modern cities. However, a trip to the countryside reveals another side of the country. The two villages are home to traditional gassho-zukuri farmhouses, some of which are more than 250 years old. The phrase Gassho-zukuri means “constructed like hands in prayer” since the thatched roofs look like a Buddhist monk’s hands united in prayer. The architecture can survive serious snow and and the roofs, which are stable despite not using nails, were designed to cultivate silkworms. 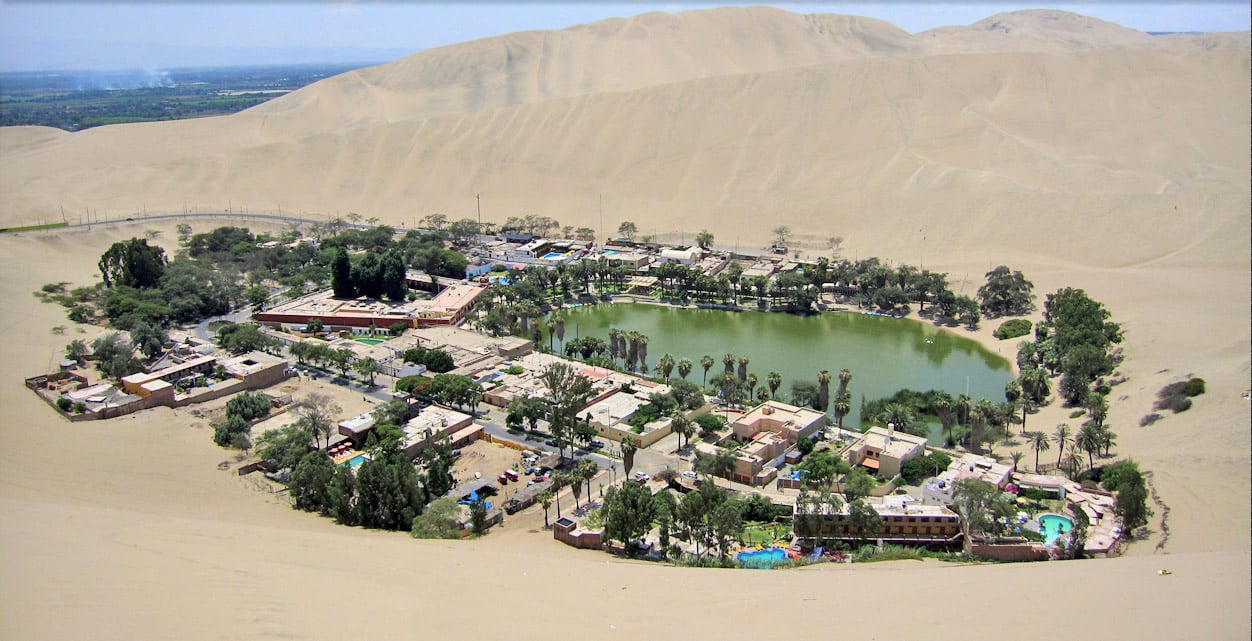 There is a small village in southwestern Peru which is built around a small oasis. The village is known as Huacachina, and it is surrounded by sand dunes. Although it has a permanent population of just 100, thousands of tourists flock to the area each year to see the place known as the “oasis of America.” It is a resort area for locals, who enjoy bathing in the lake, sand-boarding or racing dune buggies. According to local lore, the lagoon was formed when a native princess took off her clothes to bathe, but fled when a hunter approached. She left her mirror, which transformed into a lake. Some say she now lives on as a mermaid. 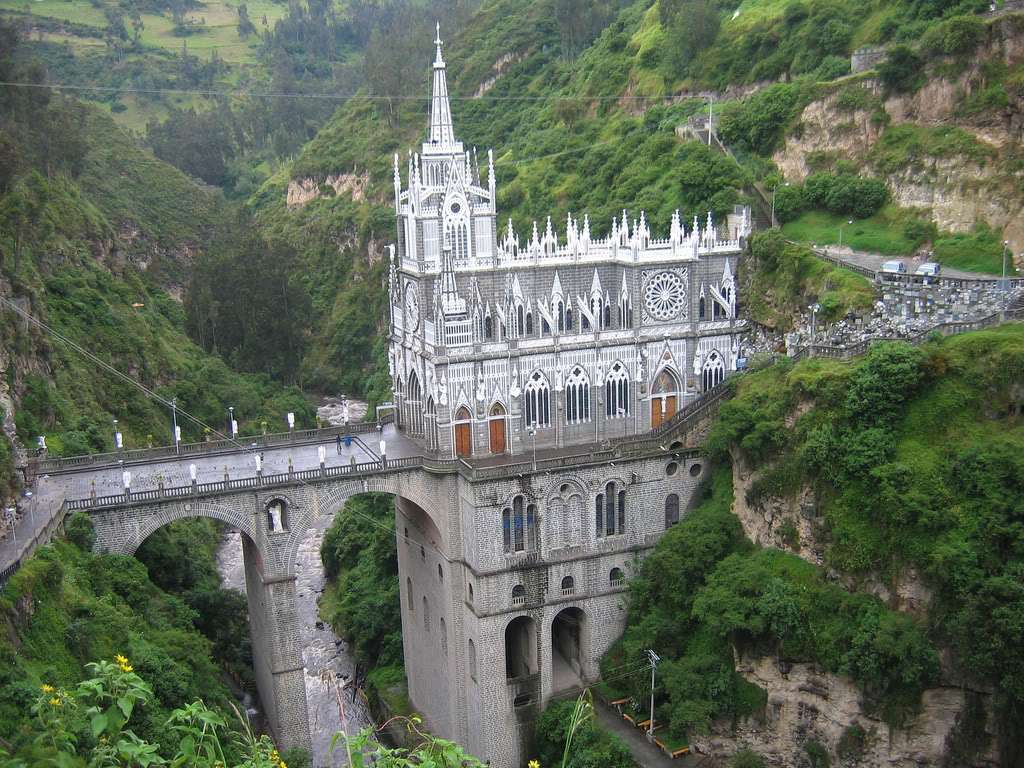 This amazing sanctuary was built because of a miracle. In 1754, a native woman and her daughter sought safety in a gorge to survive a brutal storm. As the winds and rain pelted them, the women saw an image of the Virgin Mary on the rocks. The daughter, who had been unable to hear and speak, was instantly cured. Shortly after this event, a blind man wandered the eara collecting money to build a chapel in the gorge. Upon his return to Las Lajas, his sight was restored. Finally, in the 20th century, a sanctuary was built around the 18th century chapel. 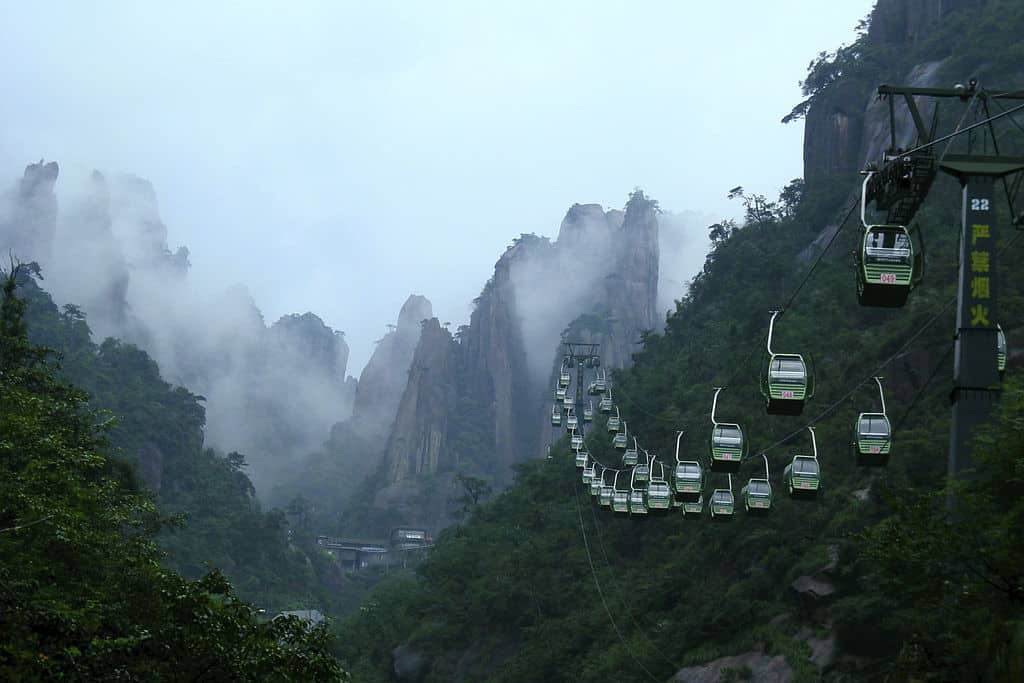 An unbelievable variety of plant and animal life awaits you at one of China’s most famous national parks. Mount Sanqing is a sacret mountain with three summits, Yujing, Yushui, and Yuhua. The three summits represent the Taoist trinity.  The park contains over 2300 species of plants and 400 species of vertebrates. The hiking and climbing experiences provide exciting views of 48 granite peaks and 80 granite pillars, which according to UNESCO, “resemble human or animal silhouettes.”