This Small Town Is America’s Most Haunted Place

Alton, Illinois is a town of just over 27,000 people that should be best known for being the location of the final Lincoln-Douglas debate. But it has a much more sinister source of notoriety.  A smallpox epidemic, the Civil War, the spiritualist movement, and unexplained death conspire to create what has been called the most haunted town in America.

At the time of the Civil War, Alton had a prison big enough to house 800 people, although it had been closed due to poor conditions. The Union decided to house over 1,900 Confederate captives at the prison – men and women accused of treason, bushwhacking, and guerrilla warfare. Sickness spread immediately because the only water was direct from the Mississippi River. Then a smallpox epidemic broke out. 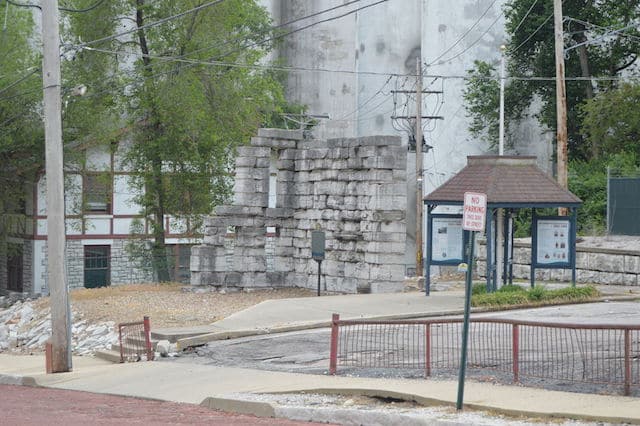 Up to 60 people, including prisoners and staff, died every day. Bodies were piled up inside a “dead house.” When the prison could no longer contain them, living prisoners were moved to Sunflower Island, where they received “treatment” at a small cottage and “pest house.” At least 300 people died on the island. In 1936 Sunflower Island was plowed over to create a dam. The remains of the 300 people were crushed and used as fill for the embankments. People who braved the Island before it was paved over saw ghosts and heard voices. The total number of deaths from smallpox was between 1,500 and 5,000 people. 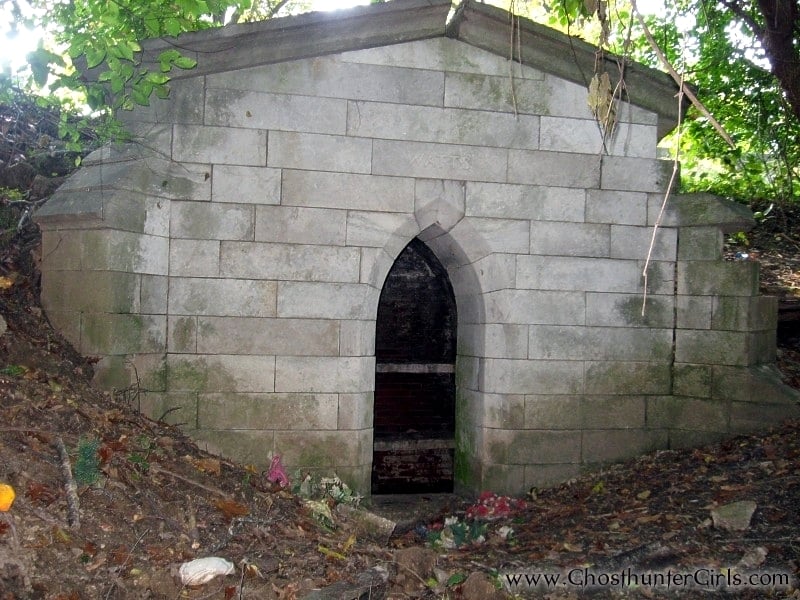 The Alton City Cemetery is a burial ground of mysterious origin. No one knows when it opened, but the first recorded burial happened in 1812. The spooky scene is accentuated by several crypts which have been broken open. The bodies of their occupants are gone. No one knows who was buried inside the crypts, but people often see fleeting movements near the crypts. Visitors can walk inside and get a look for themselves. 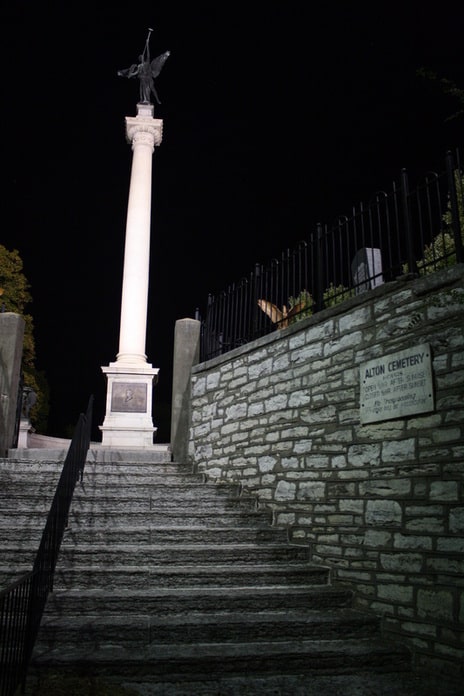 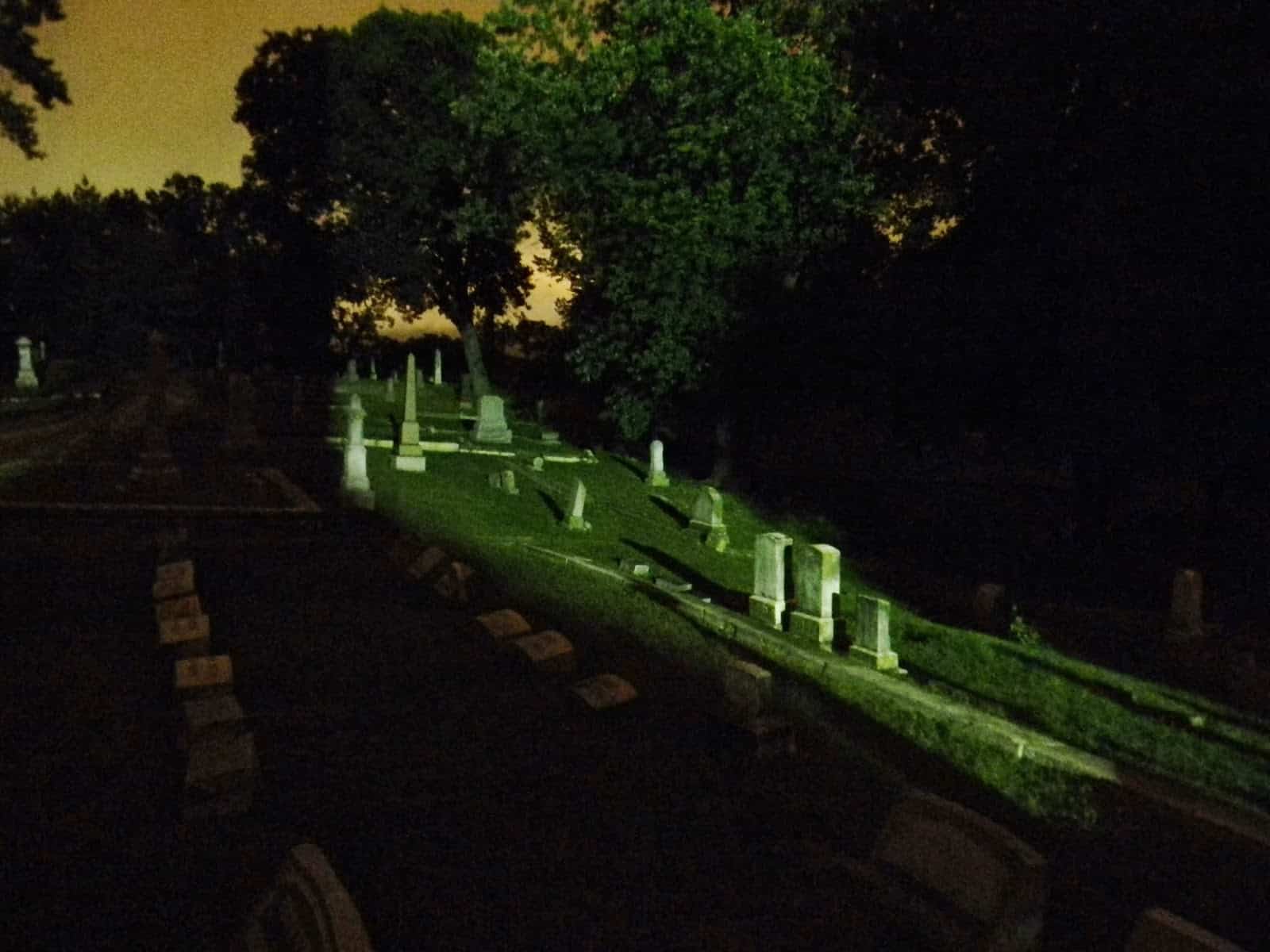 A sad grave is near the Lovejoy monument. It belongs to Lucy Haskell, a nine-year old girl who died from diphtheria. Lucy is said to be a playful spirit who only allows herself to be seen by children. Visitors to the Cemetery have said there are extreme cold spots, even in summer, at the most haunted places. 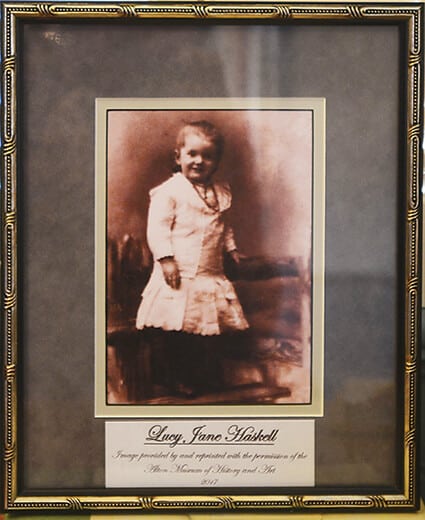 Lucy’s father built the Haskell Playhouse, which he dedicated to his daughter when she was five years old. Four years later, she died. 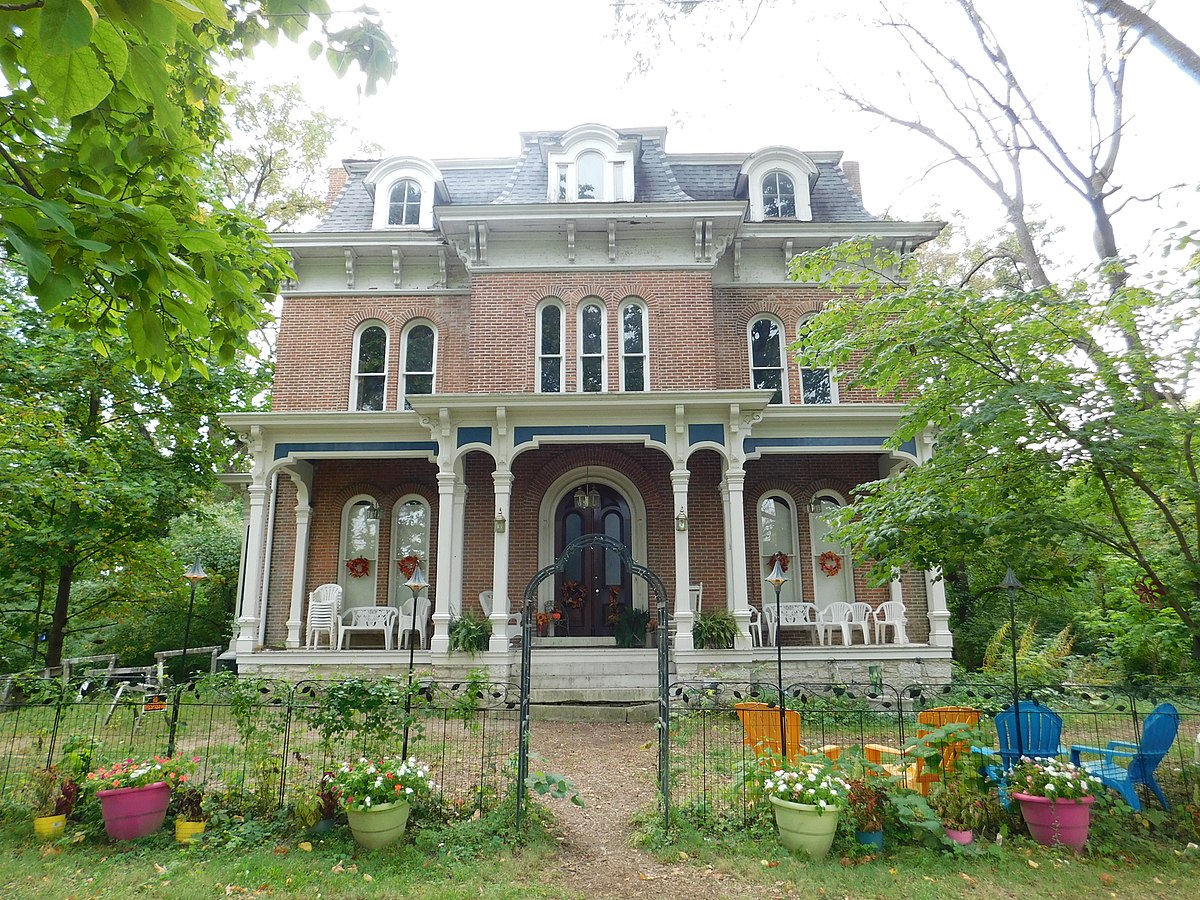 McPike Mansion was completed in 1871. It stands on what was formerly called Mount Lookout, the highest point in Alton. Its first owner was the mayor of Alton. He died in 1910. The second owner lived in the house until 1945. During his time in the house, he rented it to boarders who described unexplained noises and the sound of children laughing. After that it fell into disrepair and was largely abandoned until the mid 1990’s. The dilapidated house looked like the prototype for every Halloween haunted house. People reported seeing menacing faces staring out the window.

When the Luedke family purchased it in 1994, they quickly had their own experiences with the ghosts. They saw faces in the windows. After viewing photographs associated with the house, they realized one person in the window was the prior owner, wearing the same clothes he had on in the photograph. 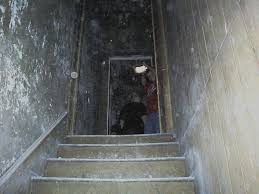 Although the spirits who are present in the house are mostly unknown, the Luedkes believe that one is a former domestic servant. One day a man dropped off some books that he had removed from the house 17 years earlier. One had the name “Sarah Wells” written inside the cover. The Luedkes have referred to the spirit as Sarah ever since. They report being hugged by this spirit, and her favorite lilac scent is said to permeate the third floor. 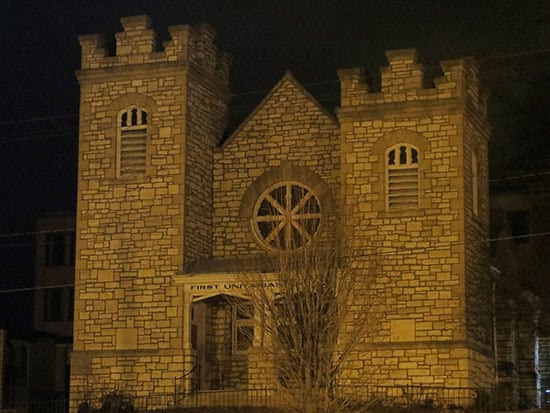 The First Unitarian Church was originally built in 1830. It burned down in 1854, and a new church was built on top of the foundation. Another fire broke out in 1901, also taking the building right down to its foundation. It was rebuilt in 1905. The Reverend Philip Mercer became a pastor there when he was 18 years old. A native of England, he drew parishoners from miles around. But one day in 1934, witnesses saw Mercer shaking so hard he could barely speak. He disappeared later that day and went to stay at the home of James McKinney. Then he vanished. 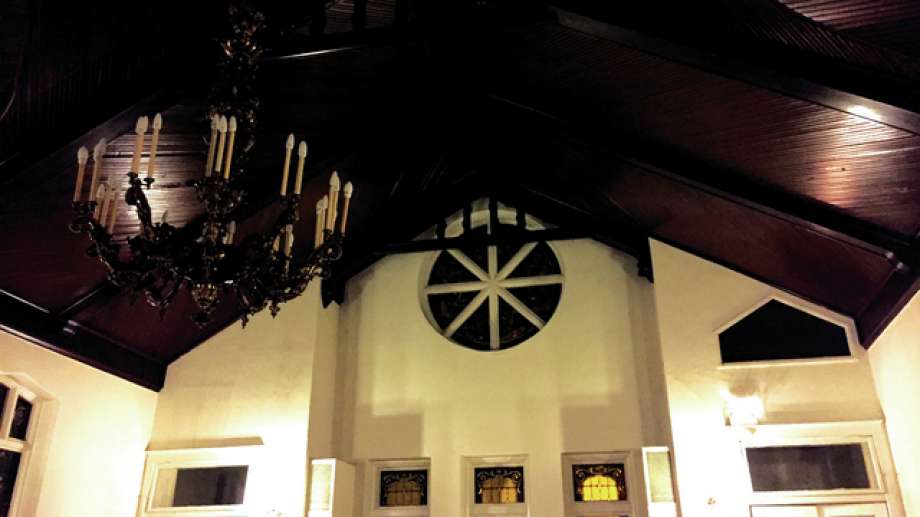 After several days, McKinney went to the church and found Mercer hanging by his neck on the right side of the transom in this photo. It was November 20, 1932. The office had been ransacked. No one know if it was suicide or murder. Some members of the community thought he was haunted by a demon. Since his death, the church seems to be haunted. Doors and windows open and close on their own. There are whispering voices, and the piano once played itself. A six-feet tall man has also been seen walking the halls. 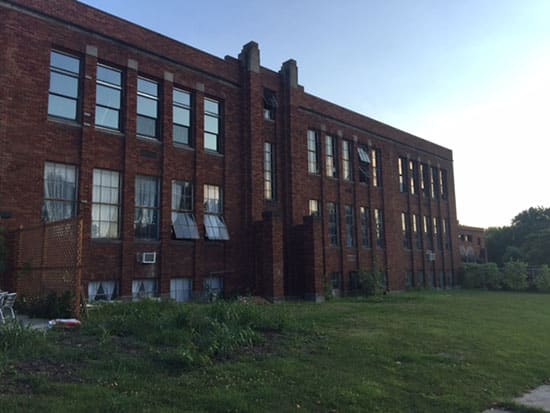 Alton’s oldest school was constructed in 1904. Its most famous student is Robert Wardlow, known as the Giant of Alton, he was the tallest person in history, at eight feet, 11 inches tall. The school was closed in the 1980’s, then the building became a factory. It closed in the 1990’s and then stories of hauntings began. Local lore has it that a girl named Mary was murdered in the school house. They say she stayed over one night to work on her homework, then she disappeared. She was found in the girl’s locker room the next day, dead and covered in blood.

A few days later, a janitor was found hanging inside the basement. Did he kill her, or did someone else murder them both? During the time when the factory was housed in the school house, employees reported objects moving mysteriously on their own, hearing footsteps in the corridors, and even sightings of Mary herself. One employee reports the girl hanging around her office, and even typing X-O-X-O on the computer. This employee also reported being tracked by a malevolent spirit. She frequently found smashed glasses near the place where Mary was murdered. 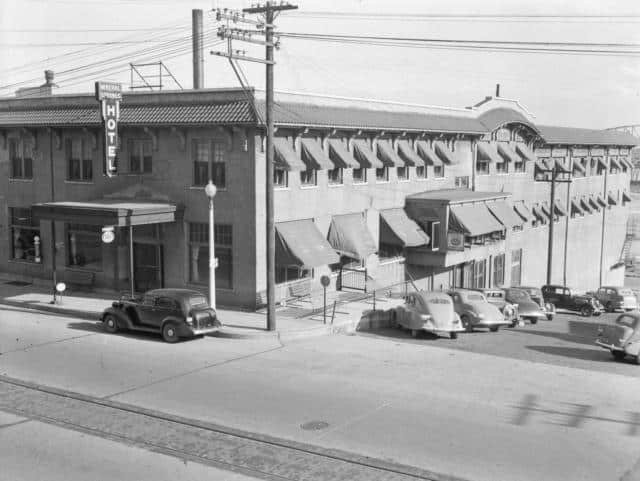 The Mineral Springs Hotel opened in 1914. After a drill for fresh water resulted in the discovery of a mineral-rich spring, the owners made it into a spectacular hotel with the largest swimming pool in Illinois. Advertising from the time boasted that the mineral springs could cure people of their maladies. The water was even shipped nationwide. 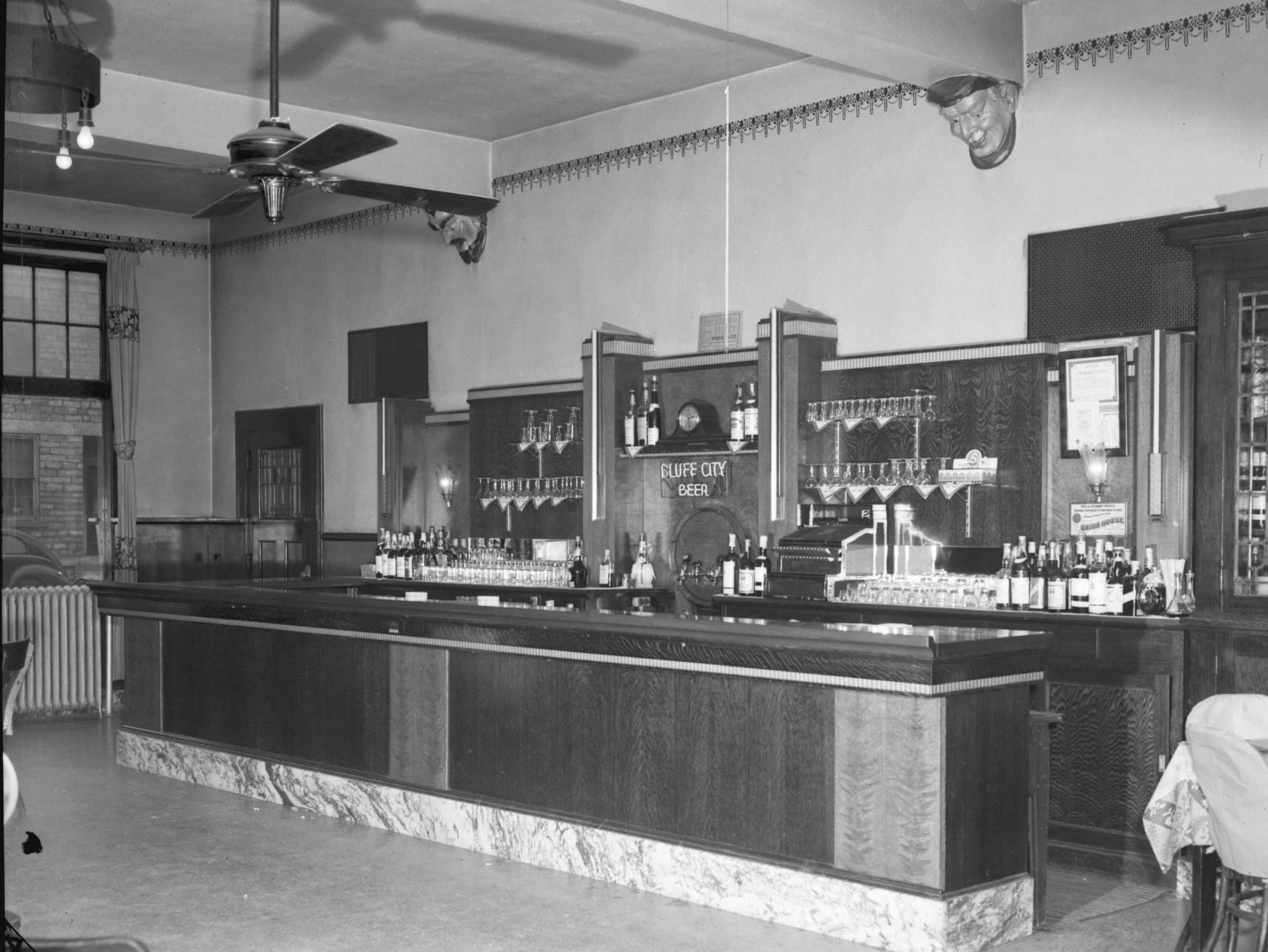 Many deaths happened at the hotel and that led to rumors of hauntings. An artist who failed to pay his hotel bill apparently haunts the old hotel bar, next to an unfinished mural he painted to try to settle up his bill. He died before he could finish. Tenants who work in the building now say they see him and smell liquor. 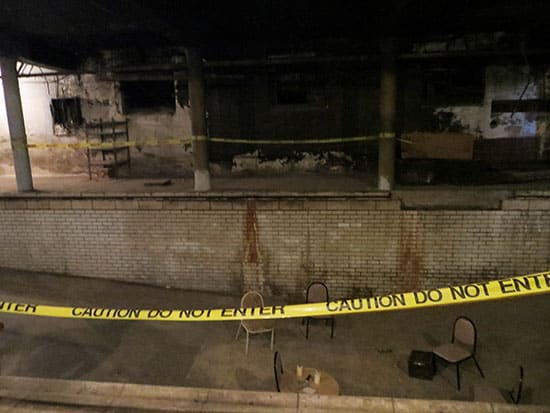 The swimming pool was a big attraction and also dangerous. One night in the 1920’s during a lavish pool party, a couple got in a public argument after the husband, who had reputation for a wandering eye, flirted with other women. The wife finally removed her shoe and smashed her husband in the face with the heel. Blood spurted from his eye and he fell into the pool and drowned. His angry ghost is seen near the pool area, still dressed in black tie. 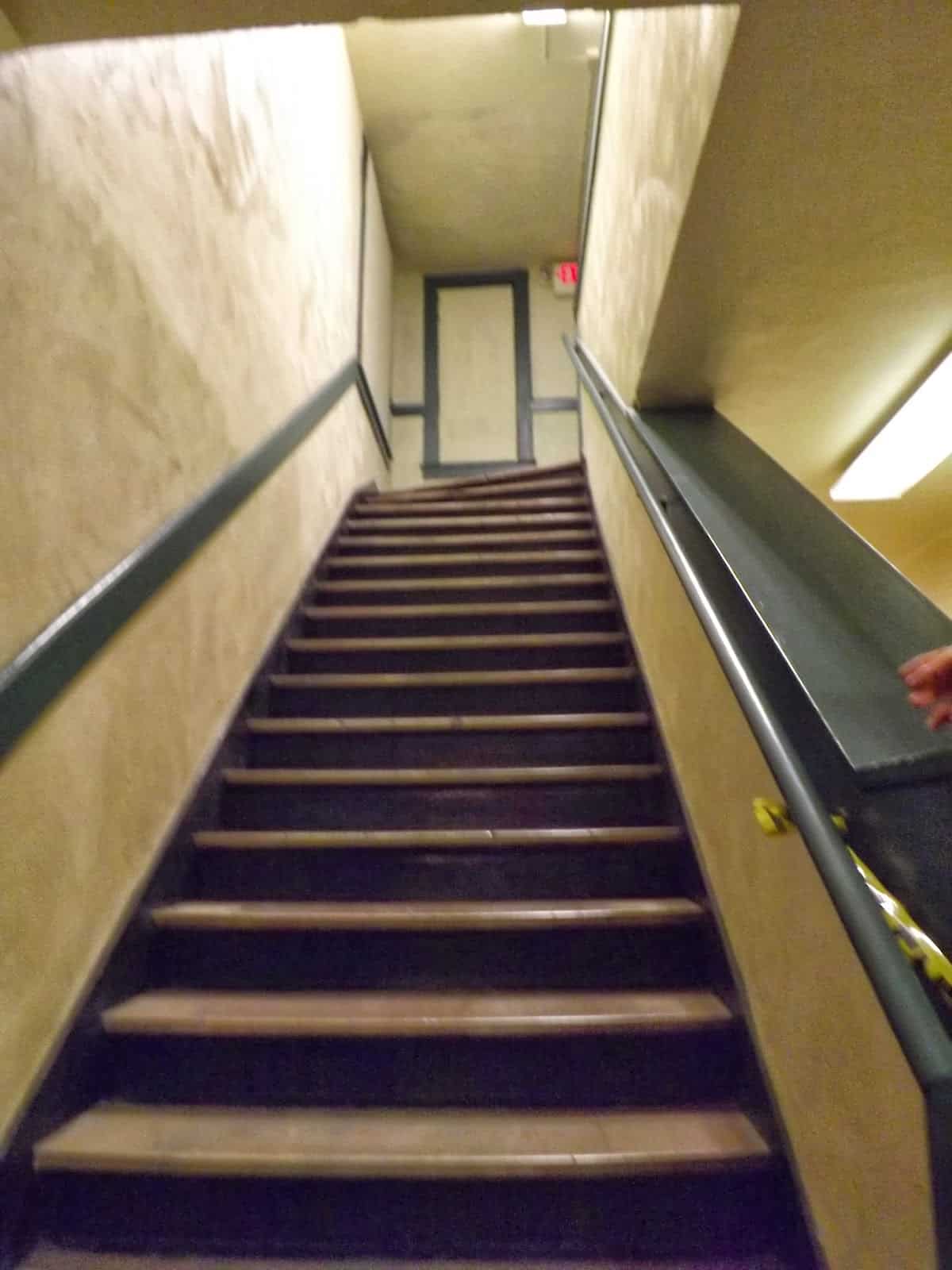 The Jasmine Lady is the hotel’s most famous ghost. She haunts a staircase near the old lobby. A former guest who went to the hotel because of its healing waters, she had an affair with another guest, unbeknownst to her husband. But one night the husband caught them in the act. No one knows exactly how it happened, but the wife fell and was found with a broken neck. Her husband went back to their room and committed suicide. People inside the building report seeing the woman fall down the steps over and over again. They report smelling her perfume, a very pungent jasmine. The former owner of the building, Bob Love, does not believe in ghosts, but he said the smell of jasmine was ever-present.

A 17-year old named Clarence drowned in the swimming pool. His death certificate hangs in the old hotel lobby, which is now an antique mall. Clarence also hangs around the antique mall. He’s been spotted frequently by customers.