When this little puppy was discovered, no one was sure if she would make it. She was in a terrible condition and was horribly emaciated. However, her fighting spirit allowed her to pull through and you won’t believe the miraculous transformation she underwent! 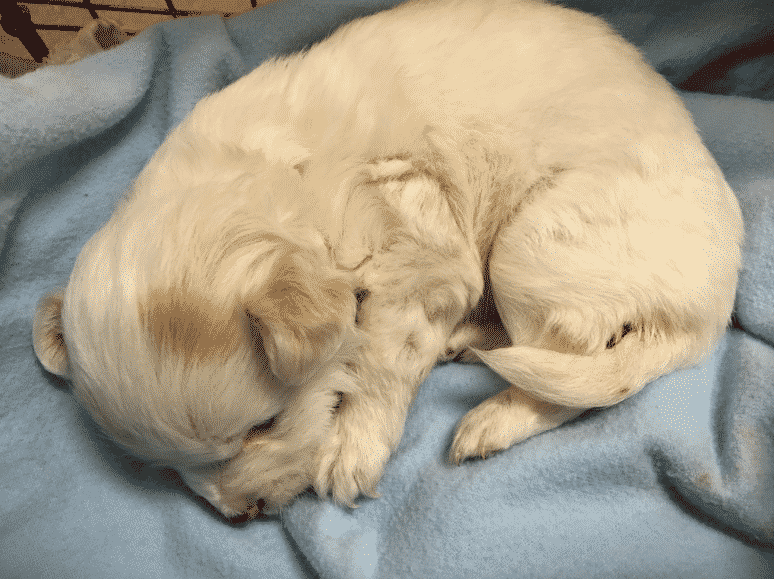 One day, a man was taking a walk through the park when he saw something unbelievable. There in the bushes was an abandoned baby puppy. She looked so small and the man knew he had to help! 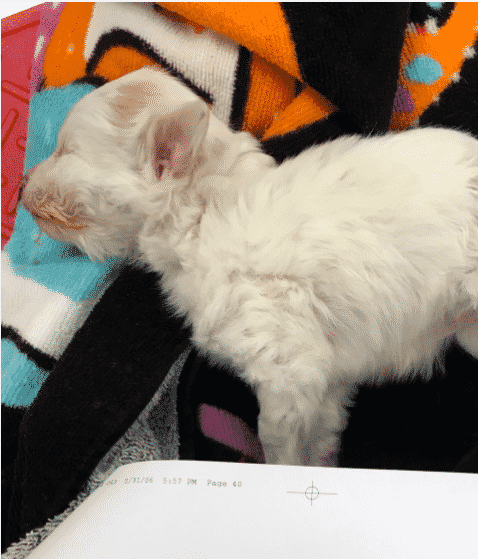 So the man that found her decided that he would help out by feeding the tiny puppy some milk. However, the puppy’s condition only continued to get worse and worse. That’s when the man decided to get some outside help. 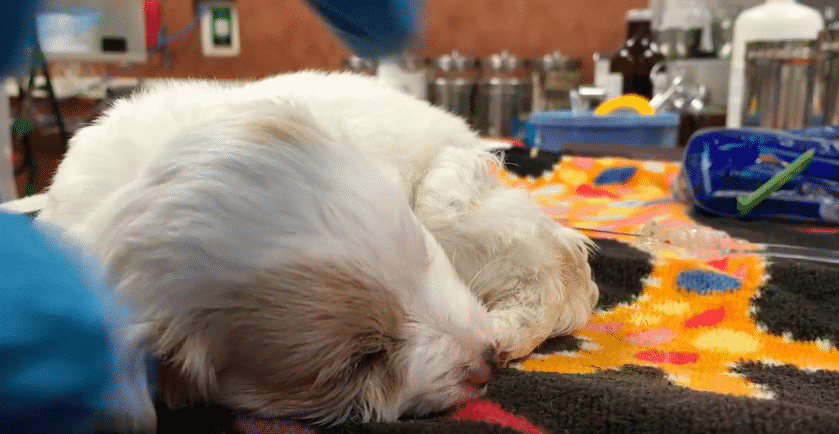 The man knew that he could no longer take care of the puppy on his own. So he brought her over to the San Jose Animal Care Center. When the vet team weighed the puppy she was only 0.5 pounds! 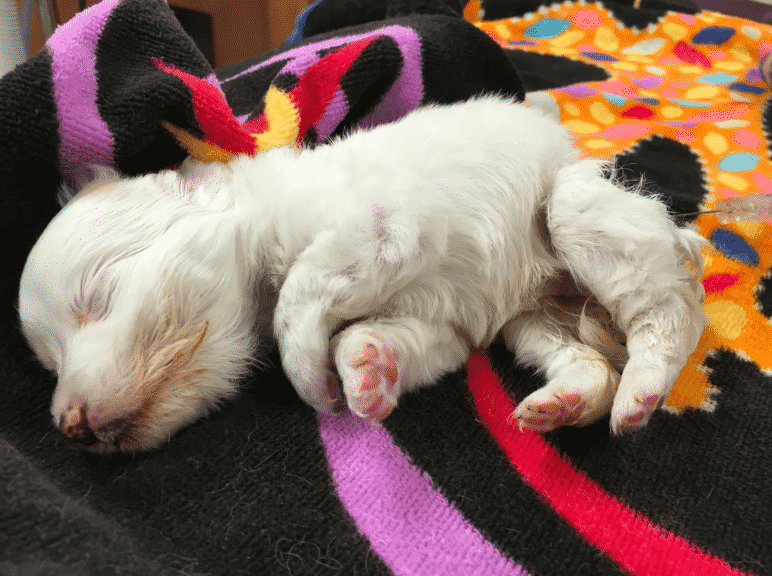 The puppy was immediately brought over to the emergency vet clinic and the vet was immediately concerned. The puppy’s body was cold to the touch, her gums were pale, and she wouldn’t respond to people talking to her. 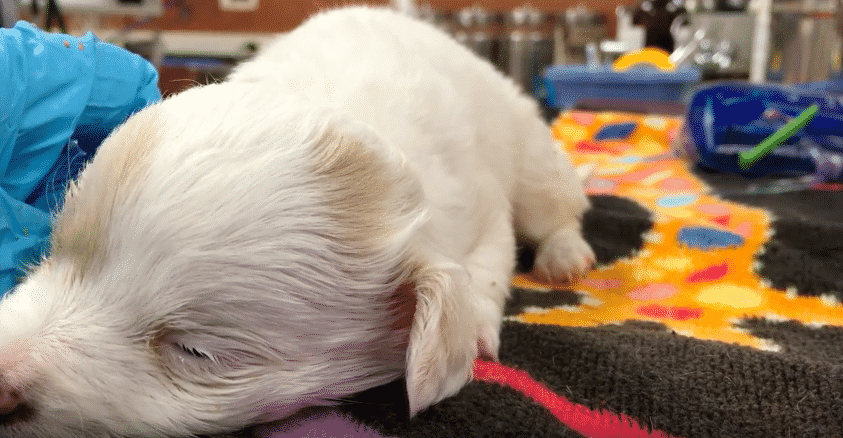 The vet was concerned that the poor puppy wouldn’t make it. The vet team was informed that the shelter was looking for a rescue that would take her in, but it could take hours. However, the vet team wasn’t sure that she would survive through that. 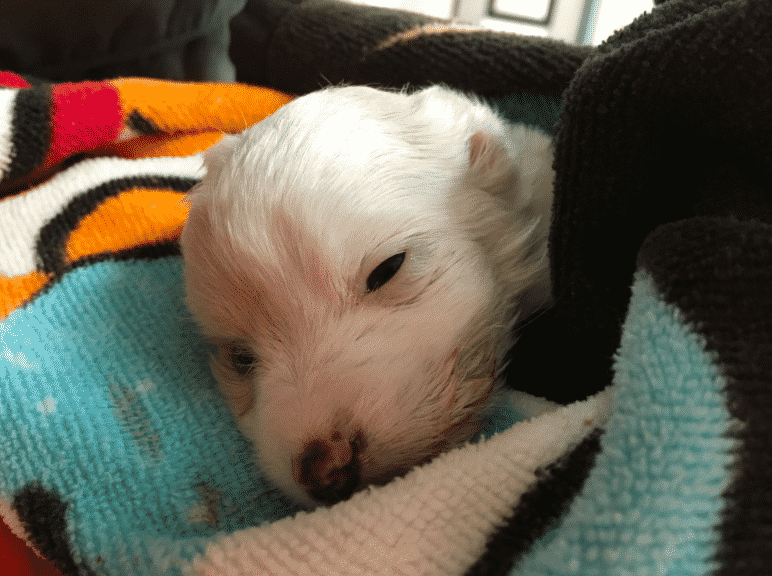 The tiny puppy was plagued by a variety of issues. She had a very low body temperature, low blood sugar levels, and she was dehydrated. Usually, puppies these small are being taken care of by their mothers… 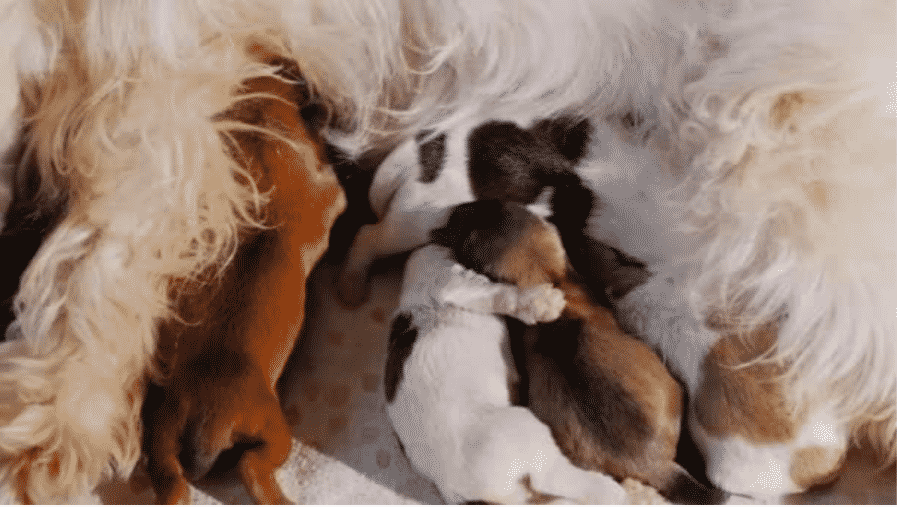 Puppies that are this small aren’t capable of regulating their own blood sugar levels. Being around their mother and having her body warmth to keep their warm is what helps them stay alive. However, this puppy didn’t have that option. 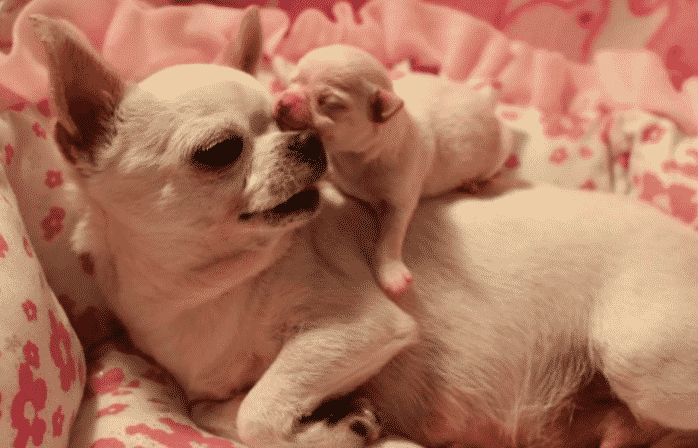 Frequent feedings are also a part of this process. This is what helps keep baby puppies and kittens from being dehydrated and from having low blood sugar levels. Without their mothers, many kittens and puppies have no chance at surviving. 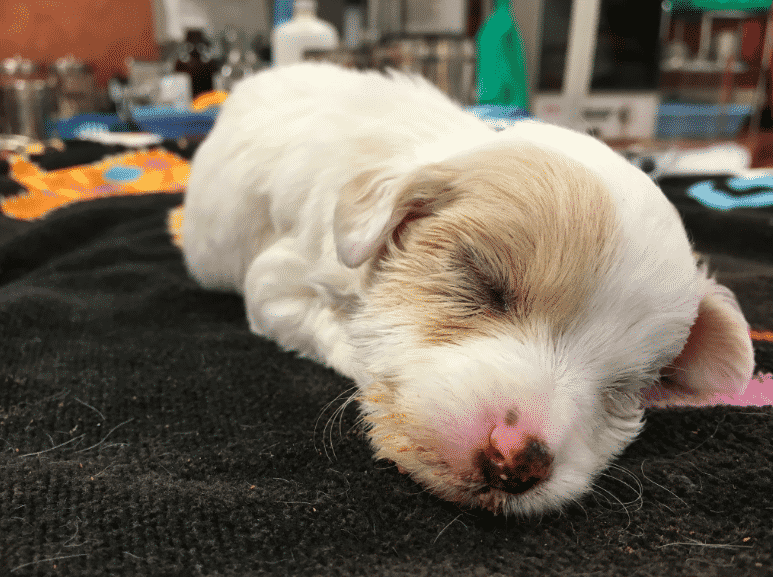 The vet team immediately got to work on helping out the puppy. The first step they took was to give her heat support. This would help raise her body temperature up to a sustainable level. 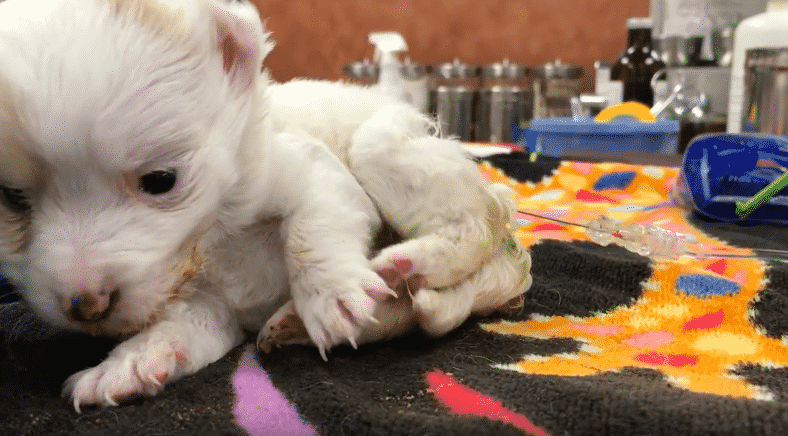 Next, since the puppy was so dehydrated they needed to get some fluids into her system. They began to administer fluid into the puppy along with incredibly important medications. 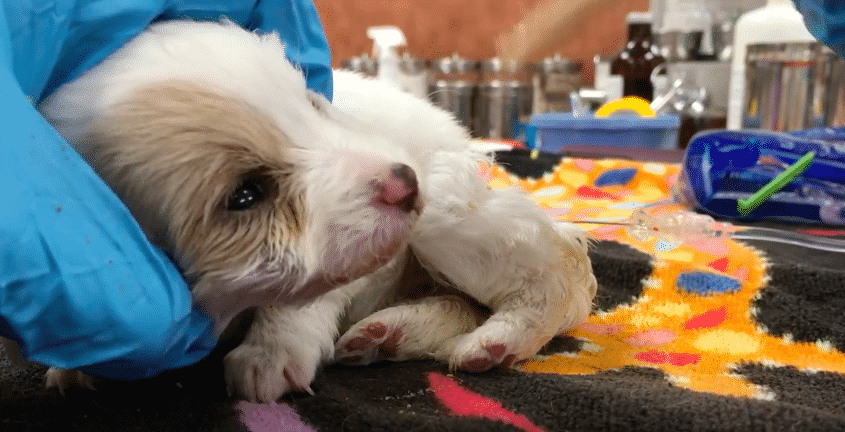 Then, the puppy was administered a bolus of fluids with important sugars. This would help combat a lot of her low blood sugar levels. She was then maintained on a constant fluid drip. 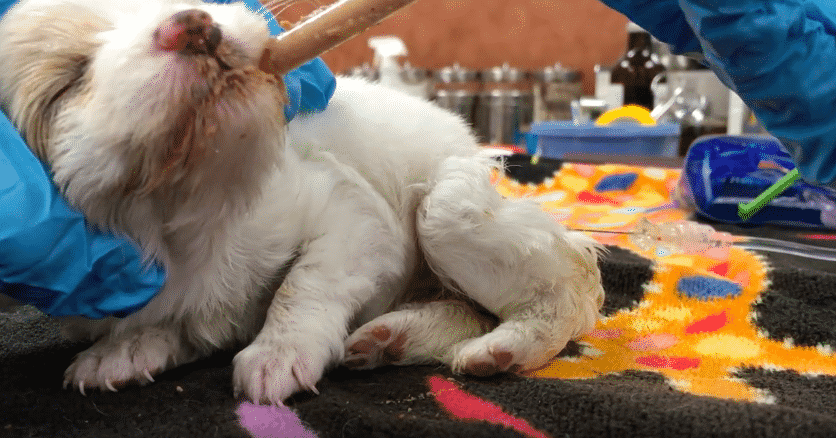 Finally, it was time for this tiny puppy to start eating. The vet team brought out a syringe and began administering food that way. At first, the puppy could barely swallow the food from the syringe. 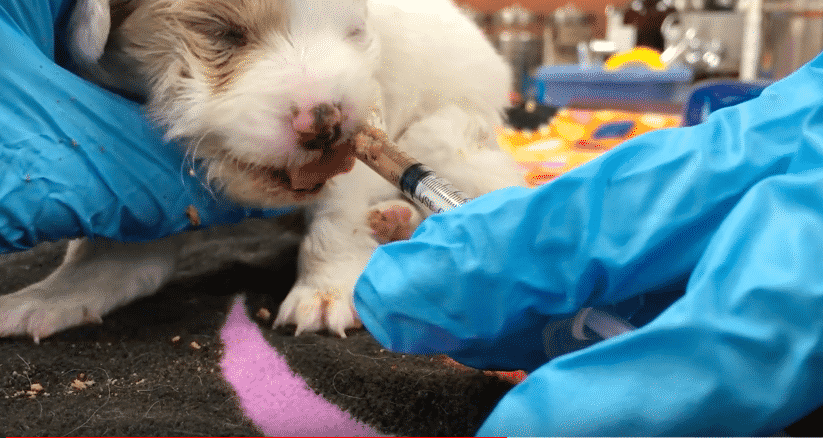 Little by little, the puppy started to acknowledge the food more and more. She began to eat more and this helped her build up her strength. The tiny pup was finally being responsive! 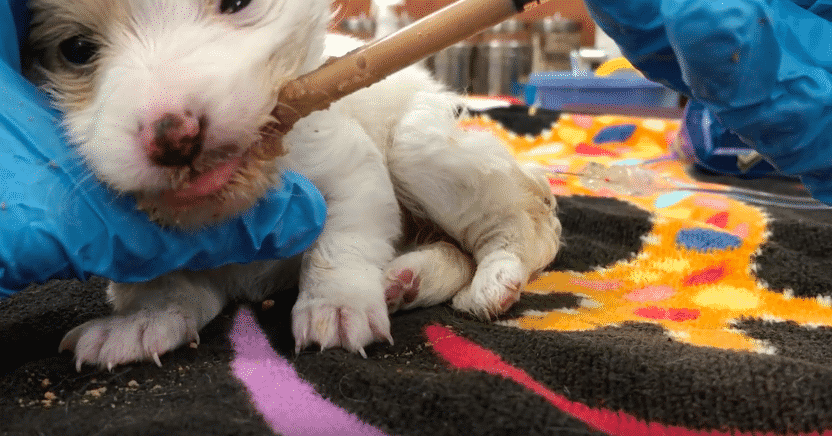 Over time, the puppy began to eat more and more of her meals. Everyone was so excited to see her progress and do better. After all, she had come to them weighing not even a pound! 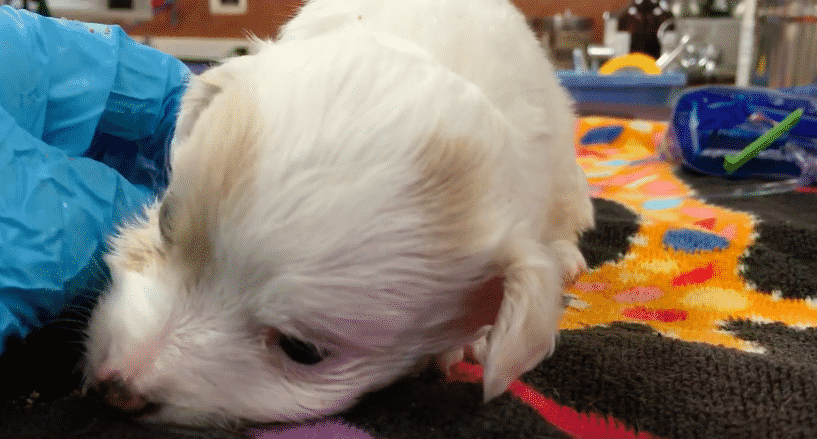 After hours of intensive care from the vet team, the little puppy was finally awake and responsive. All of their hard work had paid off. Now it was time for them to find a place for the puppy to go. 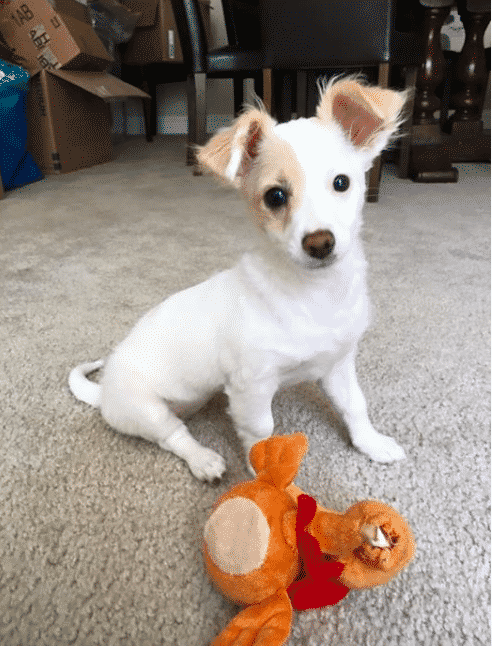 One of the veterinary nurse’s at the care center volunteered to foster the puppy. She immediately fell in love with the puppy and knew that she wanted to bring her home with her. 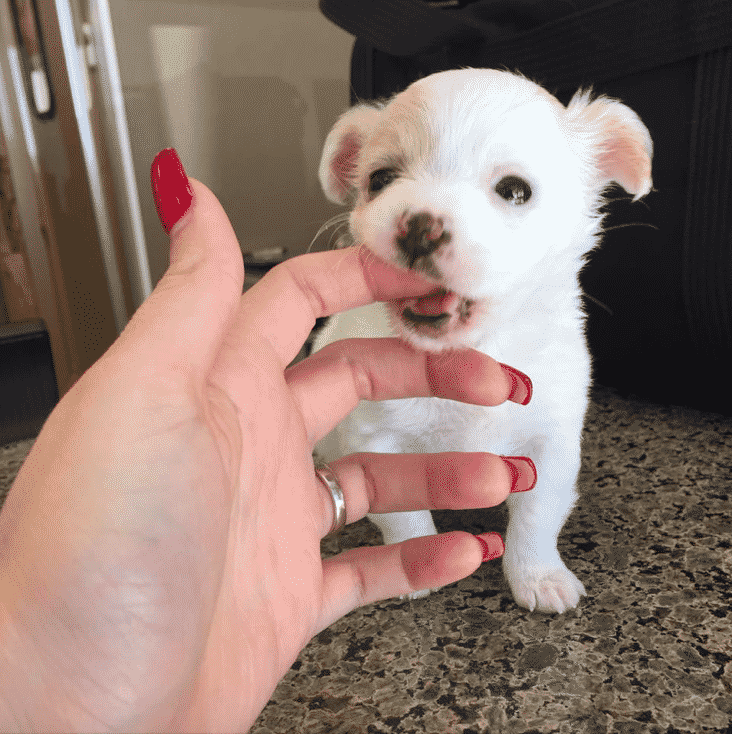 The shelter that is in charge of finding the puppy a forever home is called Fred’s Friends. Fred’s Friends has been posting updates about the tiny puppy who has now been named Lily. Lily is now doing better than ever. 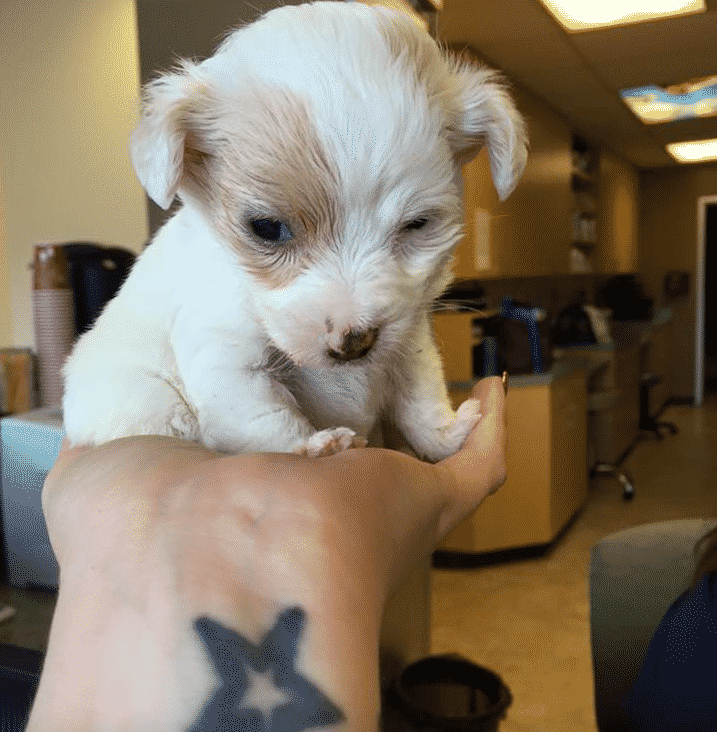 Lily has been getting bigger and better with each passing day. Fred’s Friends recently posted an update on her on their Facebook page. “Tiny Lily is doing SO much better! She is eating on her own and loves to give kisses.” 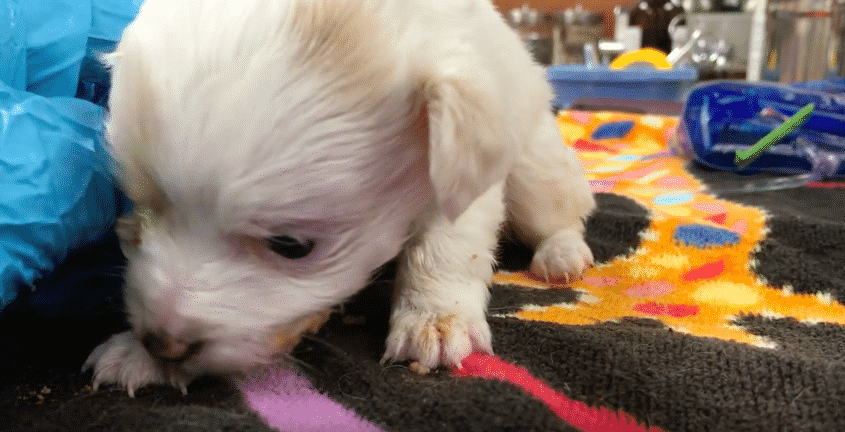 Lily is so obviously a true fighter. Despite the odds not being in her favor, Lily continued to persevere. She is now healthier and happier than before. 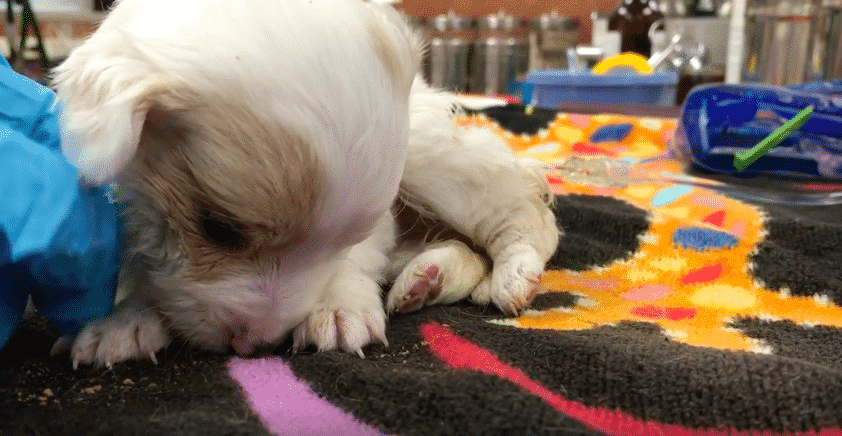