A Majestic Beauty Most Don’t Know About

Imagine a horse so majestic that it glistens like liquid gold in the sun. A horse that appears to be statue-worthy, but instead prances in a field of rolling green fields. What if we were to tell you such a horse actually exists?  And no, this isn’t Photoshop, this horse is 100% real! 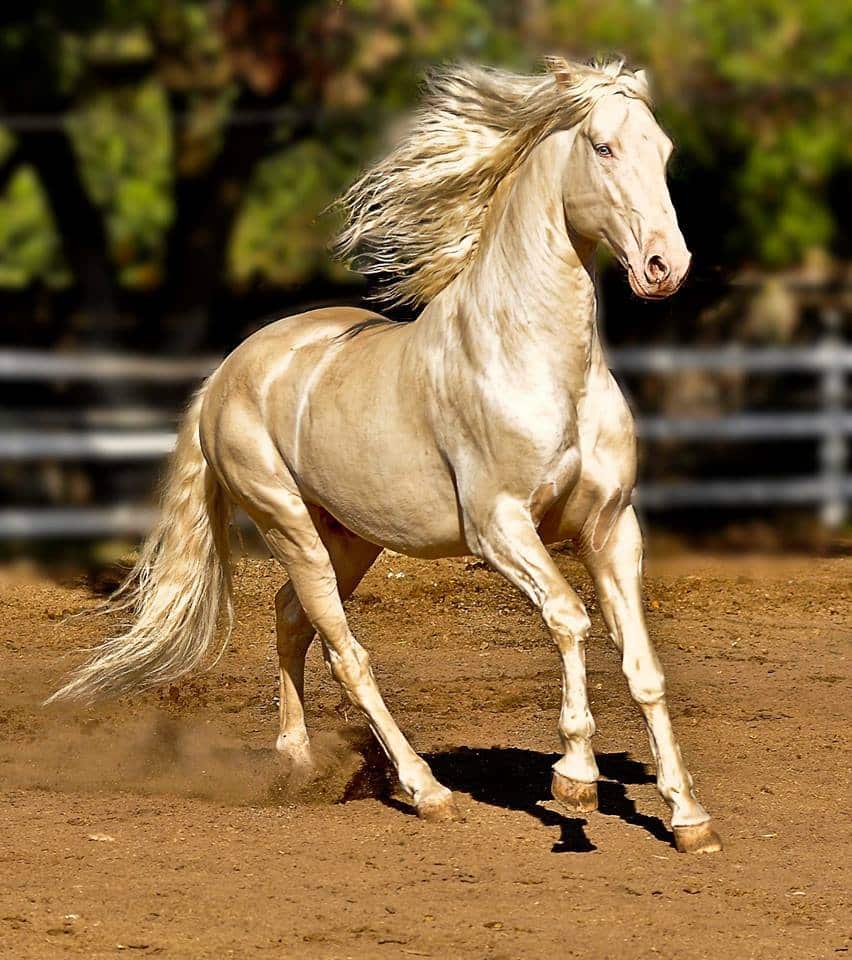 The Akhal-Teke is often proclaimed the world’s most beautiful horse. With a shimmering gold coat that looks straight out of the old tale of King Midas, it doesn’t even look real but it is! The glimmer of this horse has inspired Russian generals, captivated horse fans and even inspired a national holiday. Learn all about the Akhal-Teke, also known as the “golden horse.” 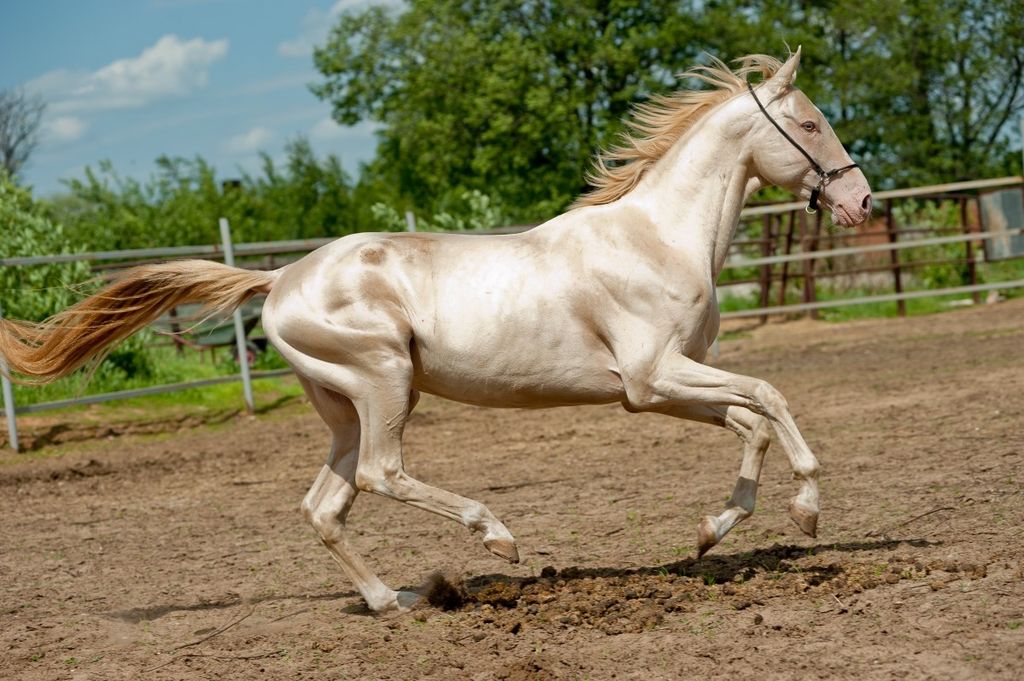 The Akhal-Teke is a show-stopper and quite a rare breed. Equestrian show attendees can’t help but look at these horses’ glimmering coats when it appears in the ring. Seeing one in the flesh is pretty lucky, especially since there are only about 6,000 located throughout the world. So where are these majestic horses found? 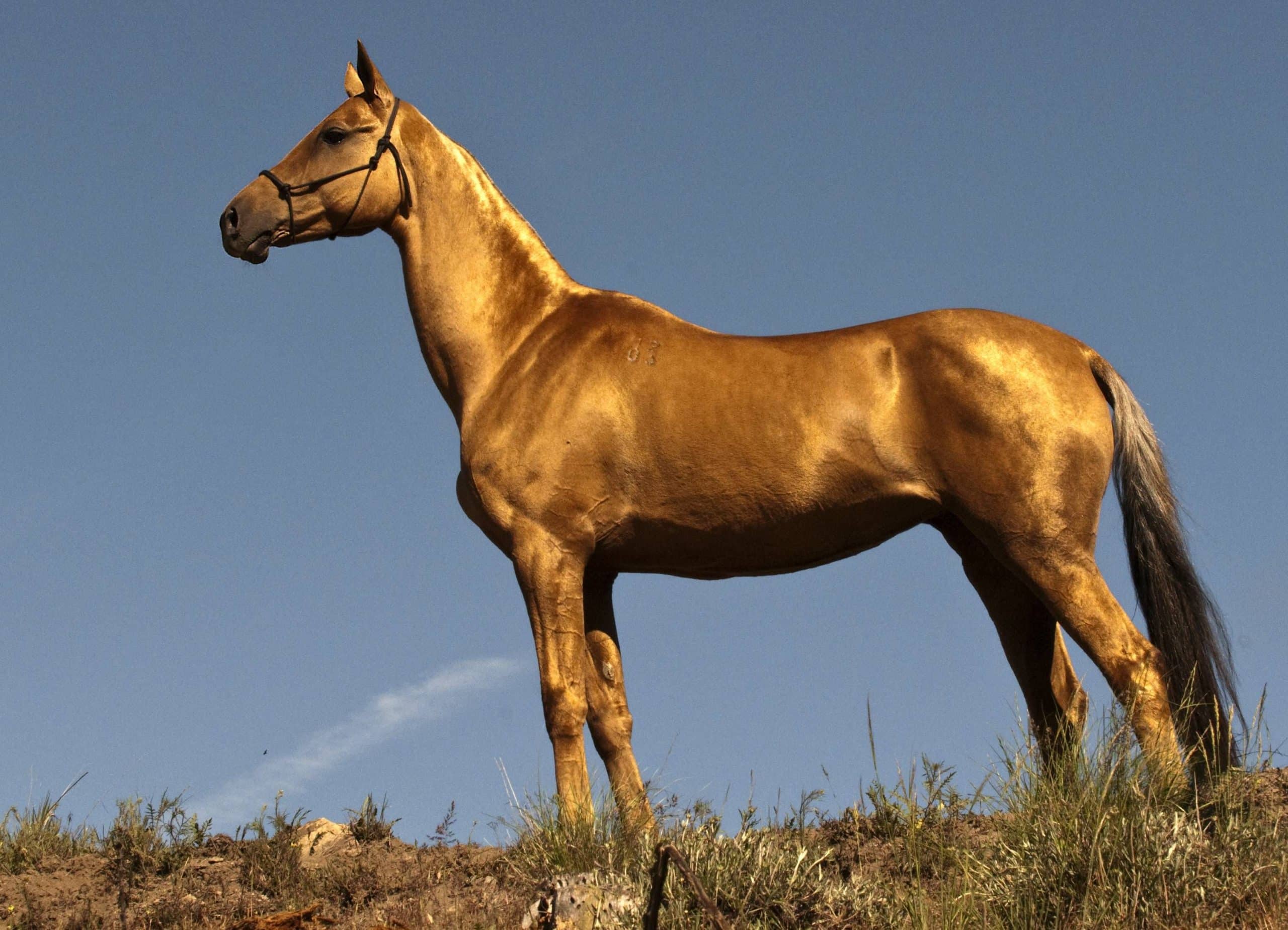 The Akhal-Teke is from the Central Asian state Turkmenistan and is believed to be one of the oldest horse breeds. It’s found mainly in Turkmenistan, Russia and Europe, plus some parts of North America. The Ancient Teke Turkmen tribes bred these horses for a very specific purpose because of their special traits. Today’s Akhal-Teke are considered direct descendants of the Turkoman Horse. 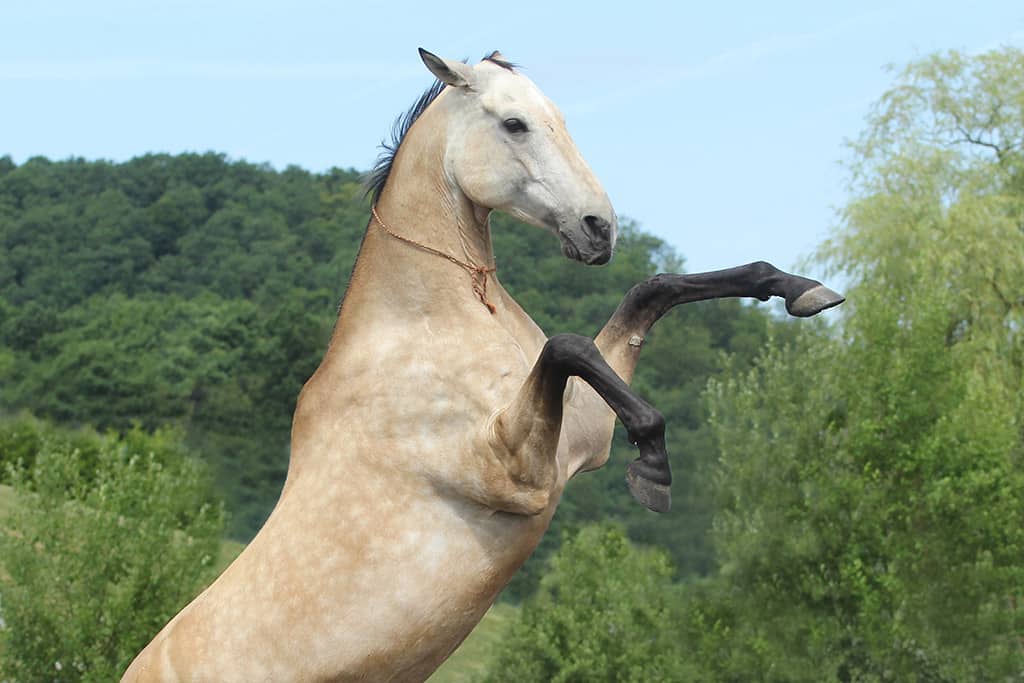 The ancient Turkmen tribes were known for their strength and resilience, and so they needed horses with the same features. They would breed horses that would help them in raids and warfare. The Akhal-Teke was one of their selected breeds selected for strength and speed.  This particular horse has some very special characteristics that made it a favorite of the Turkmen tribes. 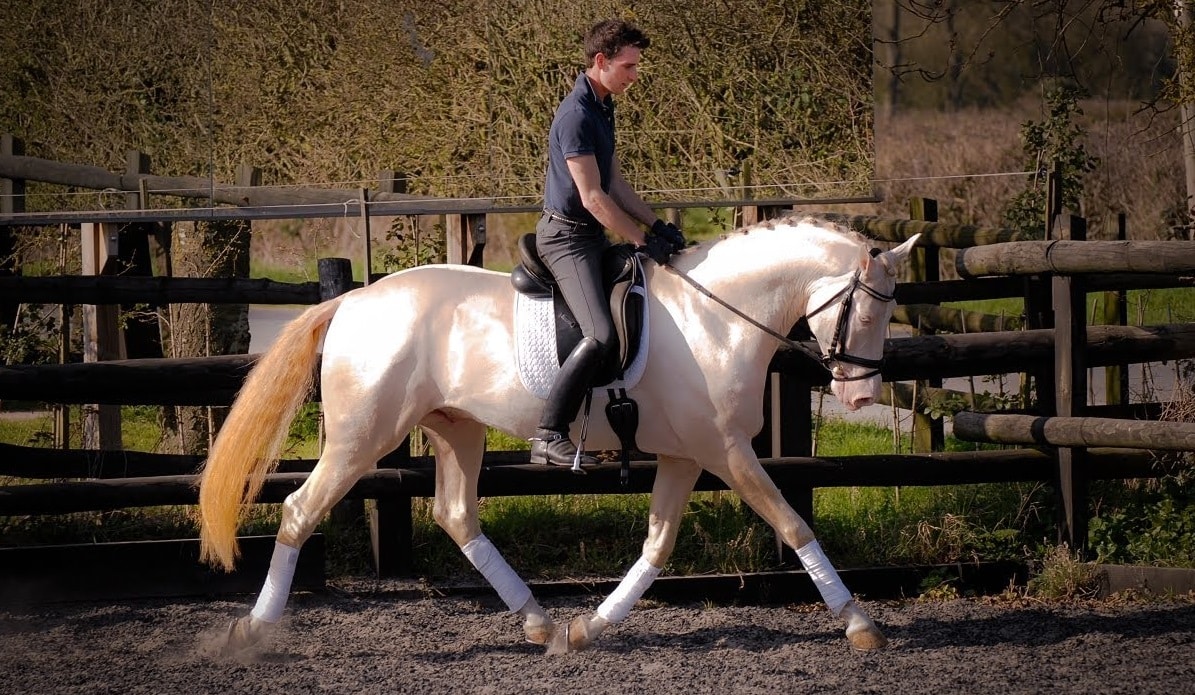 Careful breeding has preserved the horses’ brilliant coloring. One of the most prized versions is the buckskin coat, or the golden version. As you can see, the coat has a unique metallic sheen that makes it shine like gold, especially when in the sun. The coat of the Akhal-Teke gave the ancient Turkmen a great advantage when the horses were used on the battlefield for one reason: 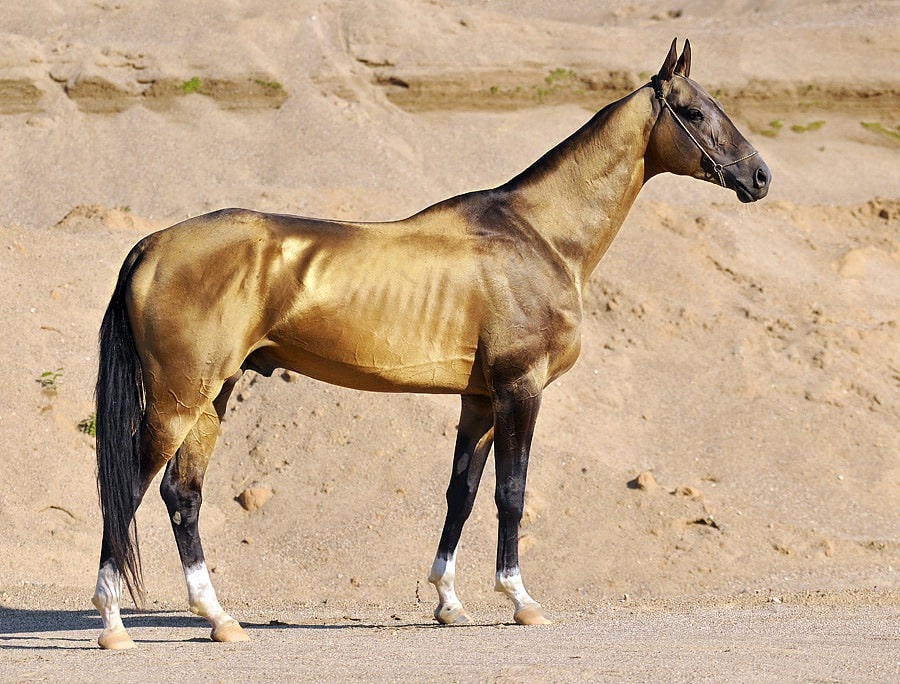 The buckskin Akhal-Teke horse offered the perfect distraction thanks to its shimmering golden coat. Enemies of the Teke tribes would be startled at the horses’ appearance and the Turkmen could then attack. However, there was something else peculiar about the coat color of the golden horse. 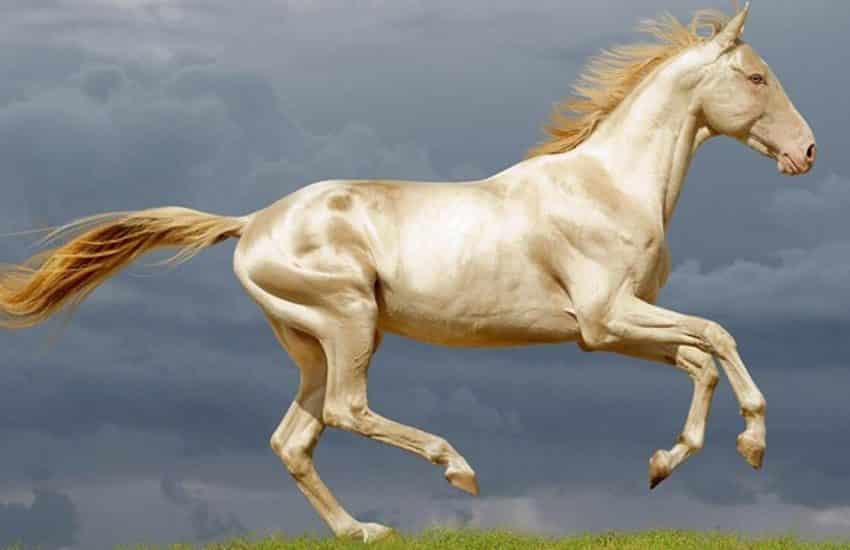 As unbelievable as it seems, these majestic creatures offered camouflage. The gold coat blended well into the desert landscape.  Turkmen loved their horses as much as anything else, and they found them essential in their daily lives. The Turkmen were nomadic and encountered conflict, thus having a fast and agile horse was important. They would show their appreciation for the horse in a variety of ways… 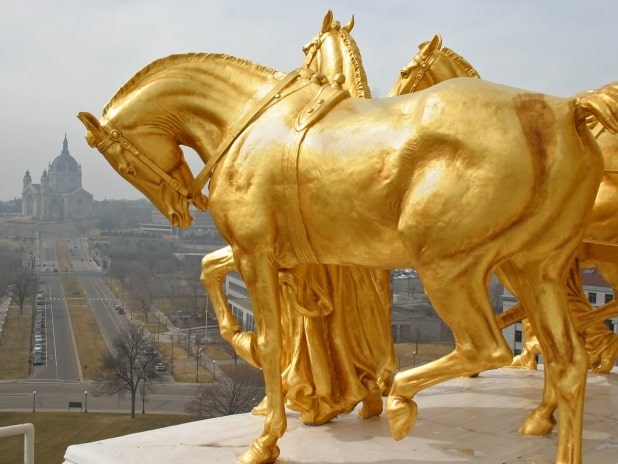 The Akhal-Teke is the National Emblem for Turkmenistan. Known as a natural treasure, the golden horse is one of the most prized elements. Nikita Khrushchev even gave Queen Elizabeth a stallion named Melekush in 1956 and the breed is even depicted on Turkmenistan’s coat of arms. You’ll even find several statues like these around Turkmenistan. Even more, the horses are celebrated each year on a very special day in April… 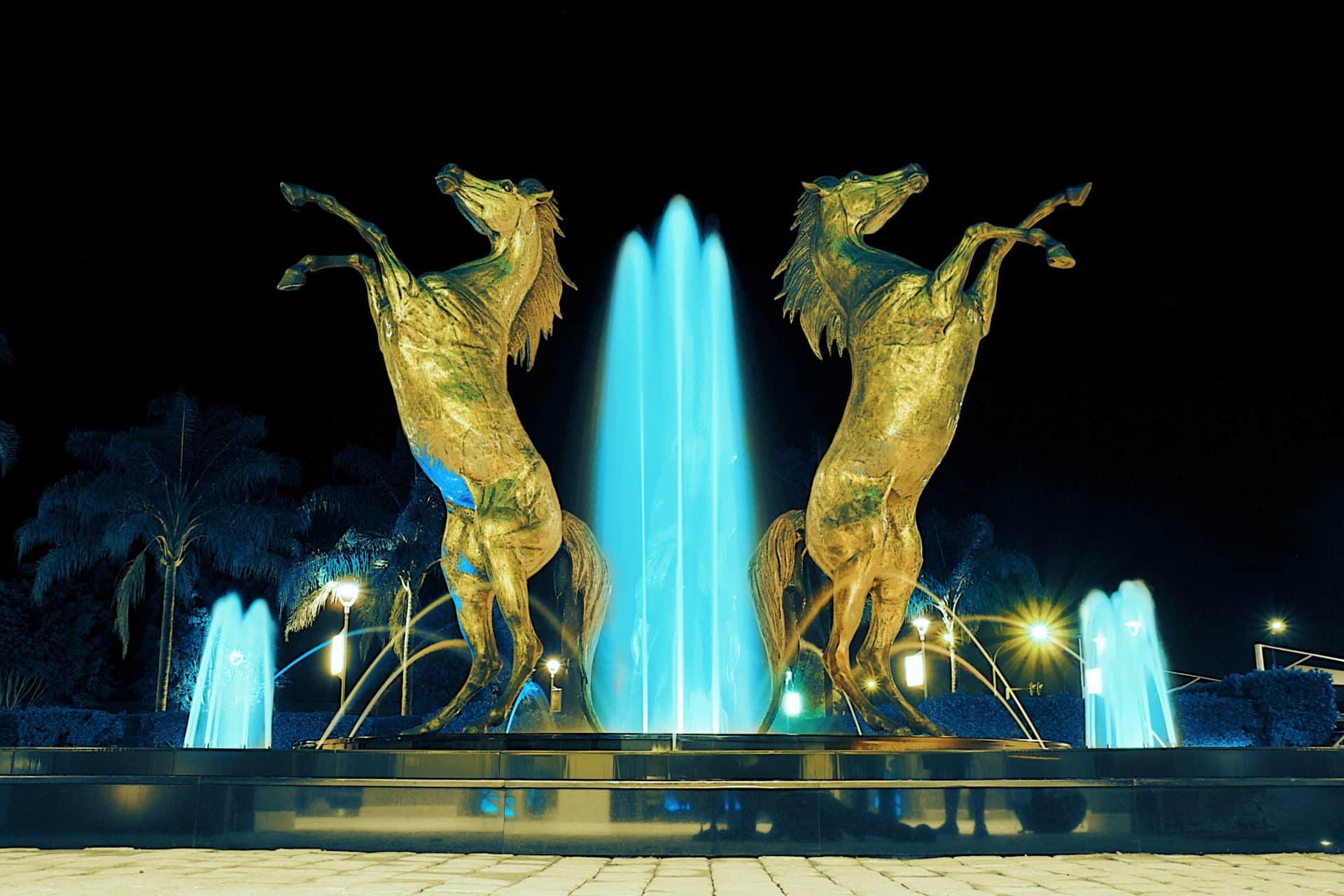 Throughout the years, even when new technology was introduced, the Turkmenistan state has prized their horses. So much that they devote one day a year to the celebration of the breed. Known as Turkmen Horse Day, the festival celebrates the horses that are the Turkmen’s favorite partners, the horses they describe as “wings from heaven.” The breed is so honored that you can’t legally change an Akhal-Teke horse’s name in Turkmenistan. You must also give them a proper burial when they pass. 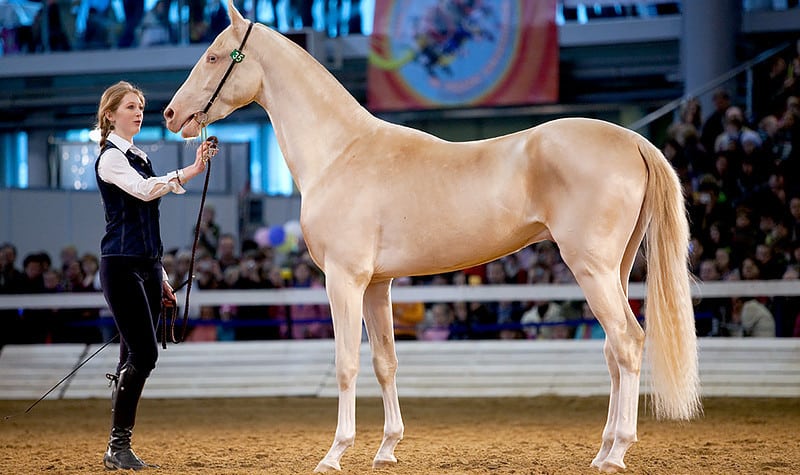 The people of Turkmenistan prize the Akhal-Teke above any other breed. Each April, the festival Turkmen Horse Day features exhibitions, equestrian events, parades, and other activities surrounding the horse. The festival is a national holiday and celebrates the Akhal-Teke’s history which includes… 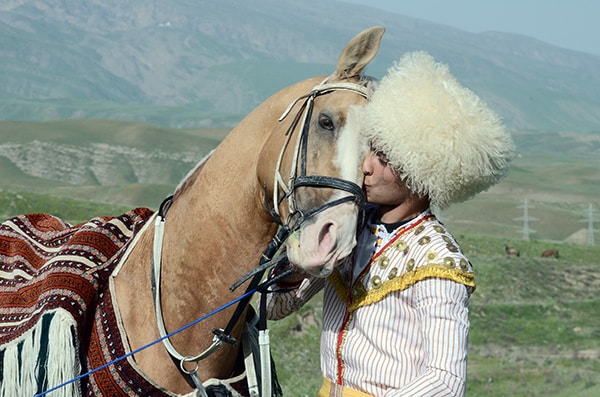 The Akhal-Teke was a hero horse throughout history. The breed was said to have carried a group of Turkmen over 2,500 miles for 84 days across the harsh terrain between Ashgabat and Moscow in 1935. From the desert to the swamp to forests, the Akhal-Teke managed to carry their riders safely through all of it. This feat of the horses was incredible considering 235 miles of the desert was didn’t have a single trace of drinking water. It was a true test of their endurance.

9. The Envy and Admiration of Empires 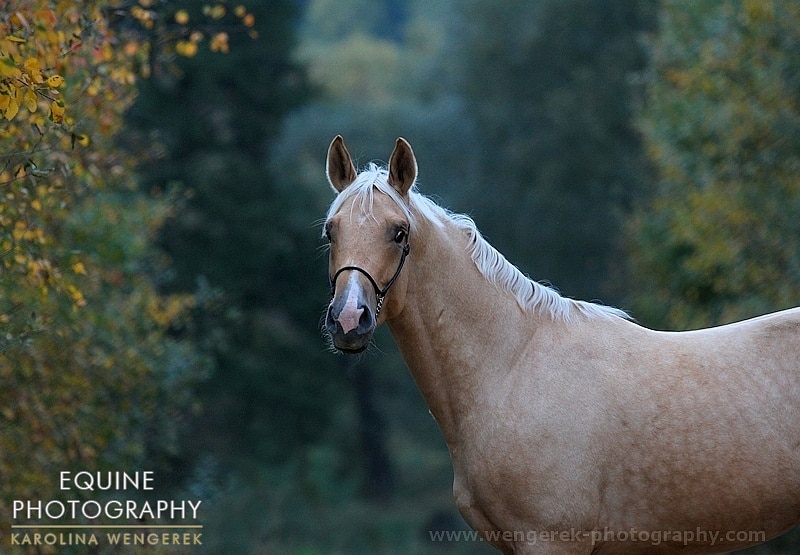 These golden heroes held the admiration of the Turkmen tribes, but also the admiration of surrounding Empires. In 1881, the Russian General Kuropatkin of the Russian Empire witnessed the strength and agility of the Akhal-Teke in battle when Turkmenistan became part of the Empire. He had to have them for his own and his relentlessness showed in his pursuits for the golden horse. 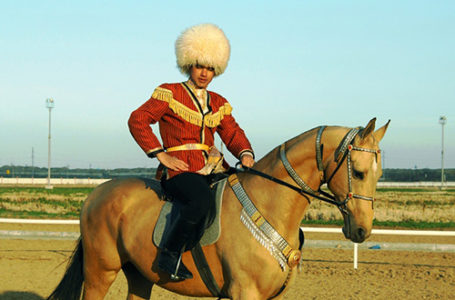 The sheer strength and endurance the horses exhibited in battle was something he prized. After the war was over, the Russian General established his own Akhal-Teke breeding farm. It would be during this time that the breed was given its name… 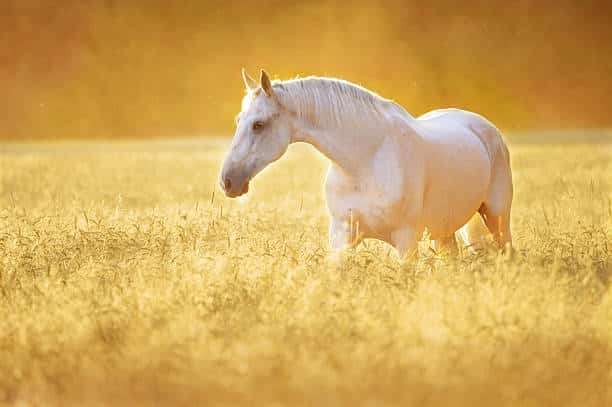 General Kuropatkin, respecting the courageous Teke tribesmen his Empire battled, officially named the breed “Akhal-Teke.” The name came from the Teke who lived near the Akhal oasis. After seeing the endurance of both of the tribe and the horse, the General honored them with the name. He would not be the only one taken by these incredible horses. 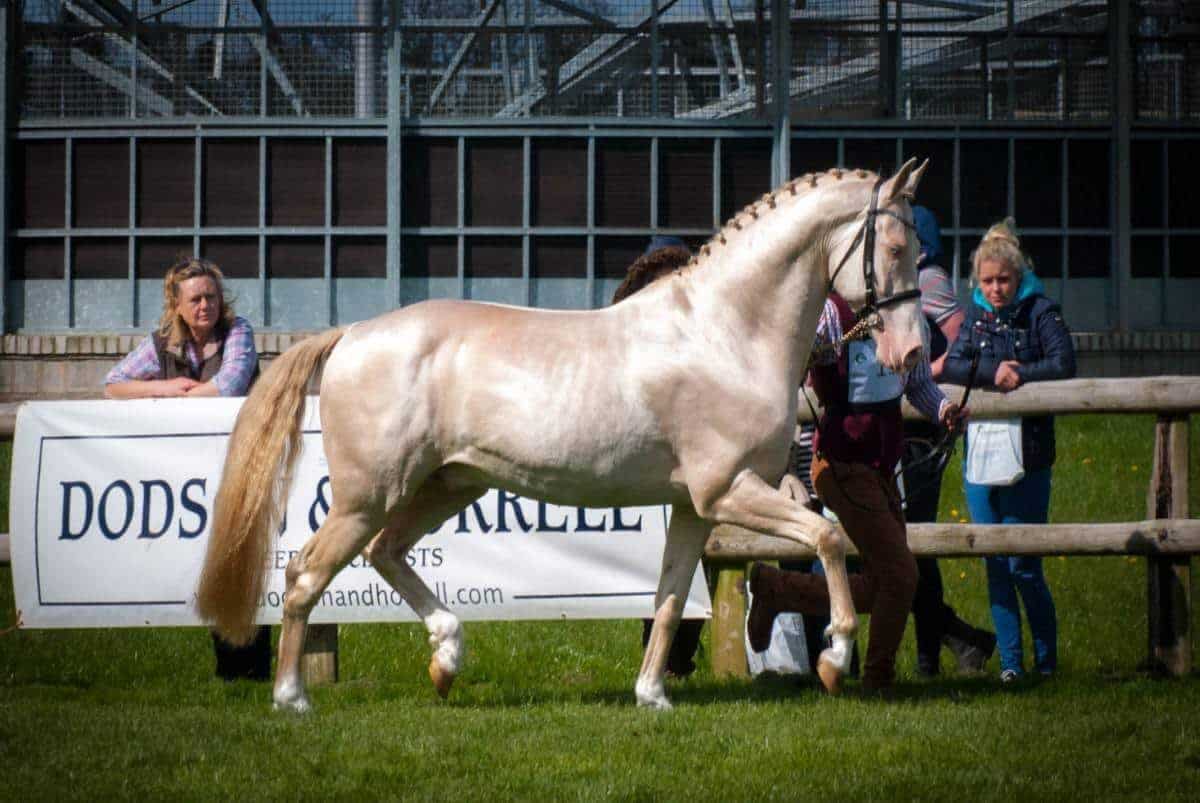 Now, the Akhal-Teke is bred for showing and racing purposes. The breed’s beauty and endurance make them perfect qualifiers. They are always a show favorite! However, the breed hasn’t come without a series of issues over the years… 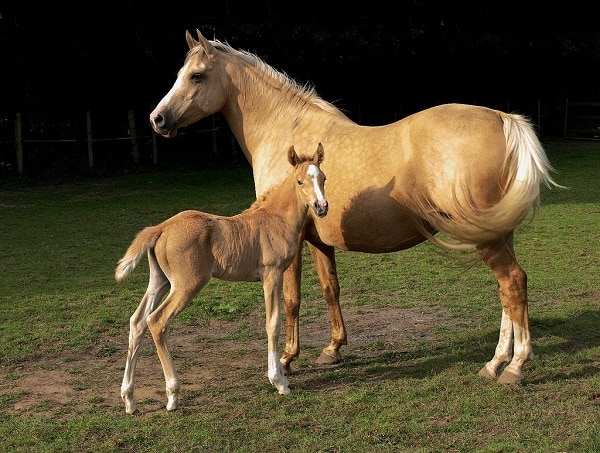 During the 20th Century, cross-breeding would become one of the main issues in protecting this breed. Breeders, wanting to create the ultimate racehorse, began cross-breeding the majestic Akhal Teke with other stallions. The breeders didn’t care about protecting the integrity of the Akhal-Teke as much as others did. The horses that came from cross-breeding weren’t as fast or resilient as they hoped either.

4.  A Decline in Population 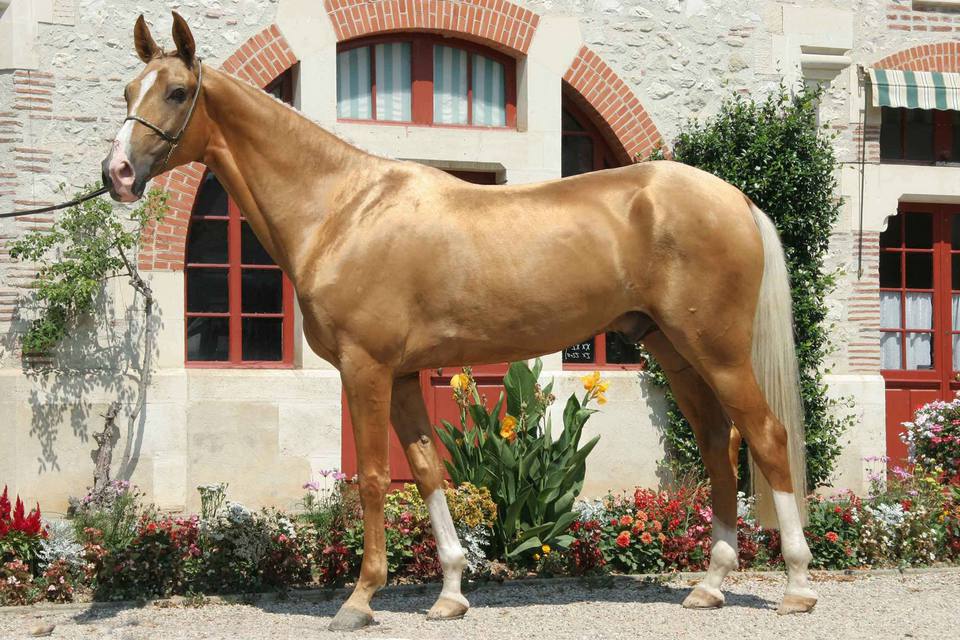 Cross-breeding caused a major decline in the population of the Akhal-Teke. Geldy Kyarizov, Turkmenistan’s minister of horses, was trying to make a studbook for the breed when he discovered evidence of cross-breeding. There was nothing he could do to stop the breeders outright as they only cared about faster, stronger horses. They weren’t interested in preserving the breed. Cross-breeding has led to some amazing mixed breeds, however. Check them out! 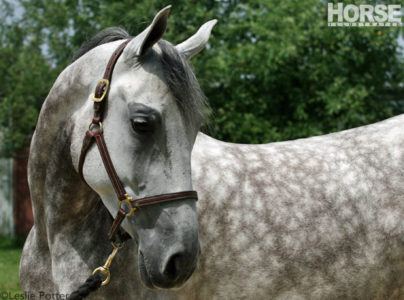 The Arabian-American is an American cross-breed which is a favorite among English show horse enthusiasts. The beautiful speckled coat makes it stand out from the rest of the horses in the ring. Speaking of standing out, this next horse stands quite tall! 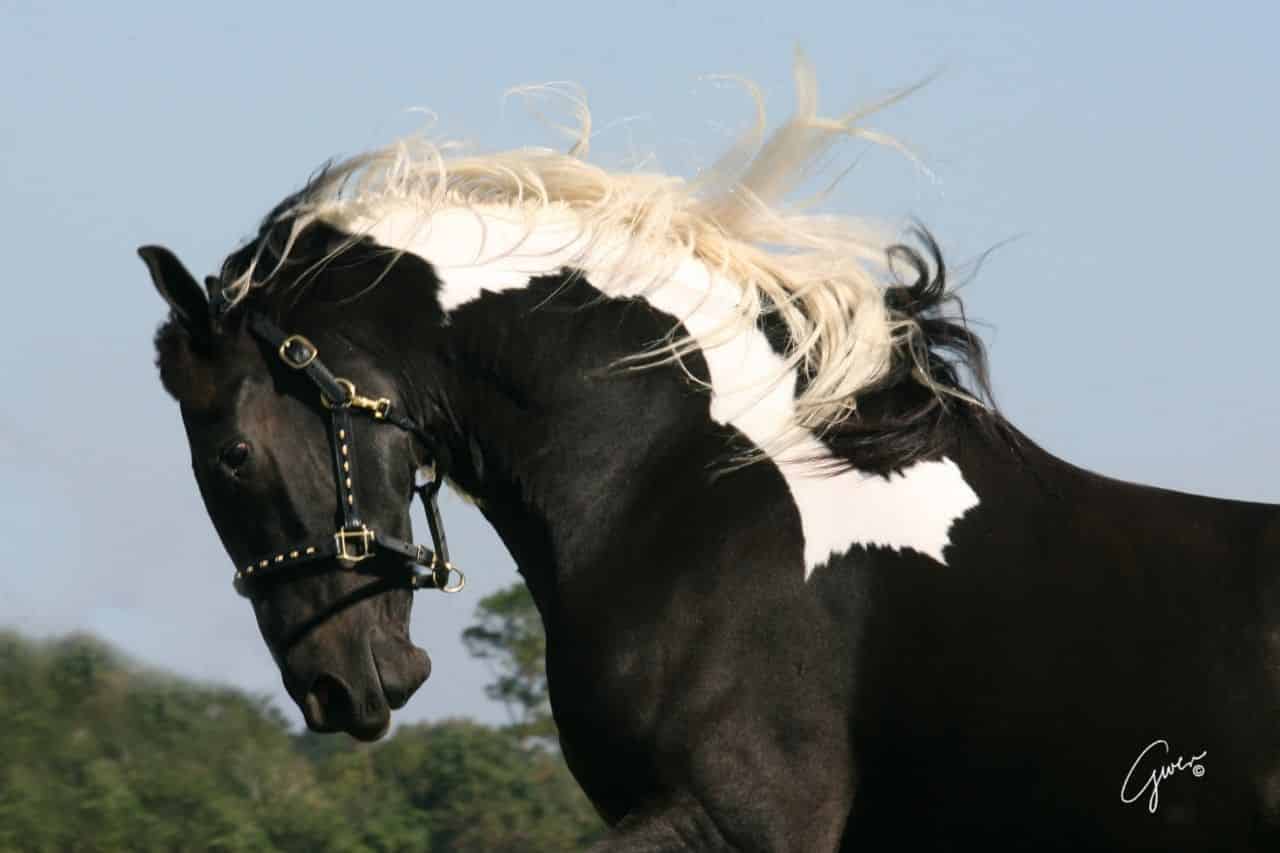 The Georgian Grande is a mix between the Friesian and American Saddlebred horse. These gentle giants are extremely popular and continue to gain popularity due to their distinct appearance. This is a relatively new crossbreed that originates from the 1970’s. There’s plenty to love about these horses, including their movement and agility. Breeders also love their gentle demeanor. It’s not the only gentle breed to catch horse enthusiasts’ eyes… 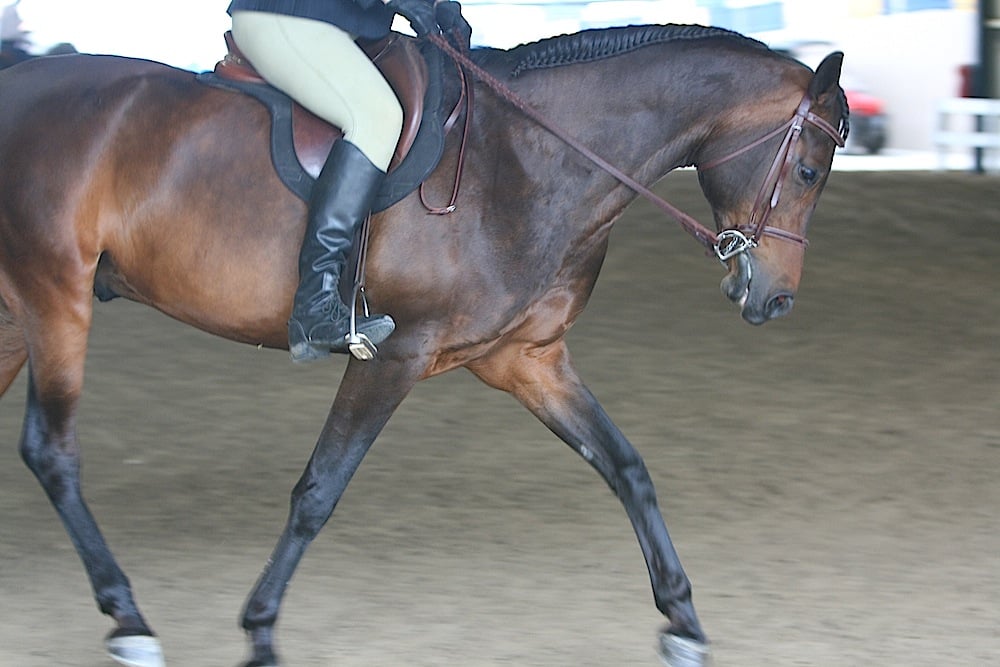 The Morab is a mix between the Arabian and the Morgan horse. It started in the 1880’s when people wanted to have a carriage horse that still was able to perform heavy farm duties. Known for being very affectionate, the Morab has a genuine love of people, making it a great starter horse for first-time riders.