His story has unbelievable twists, with moments in which he almost doesn’t get saved. But in the end, he even gets to swim in his own pond! Let’s see how it all started. 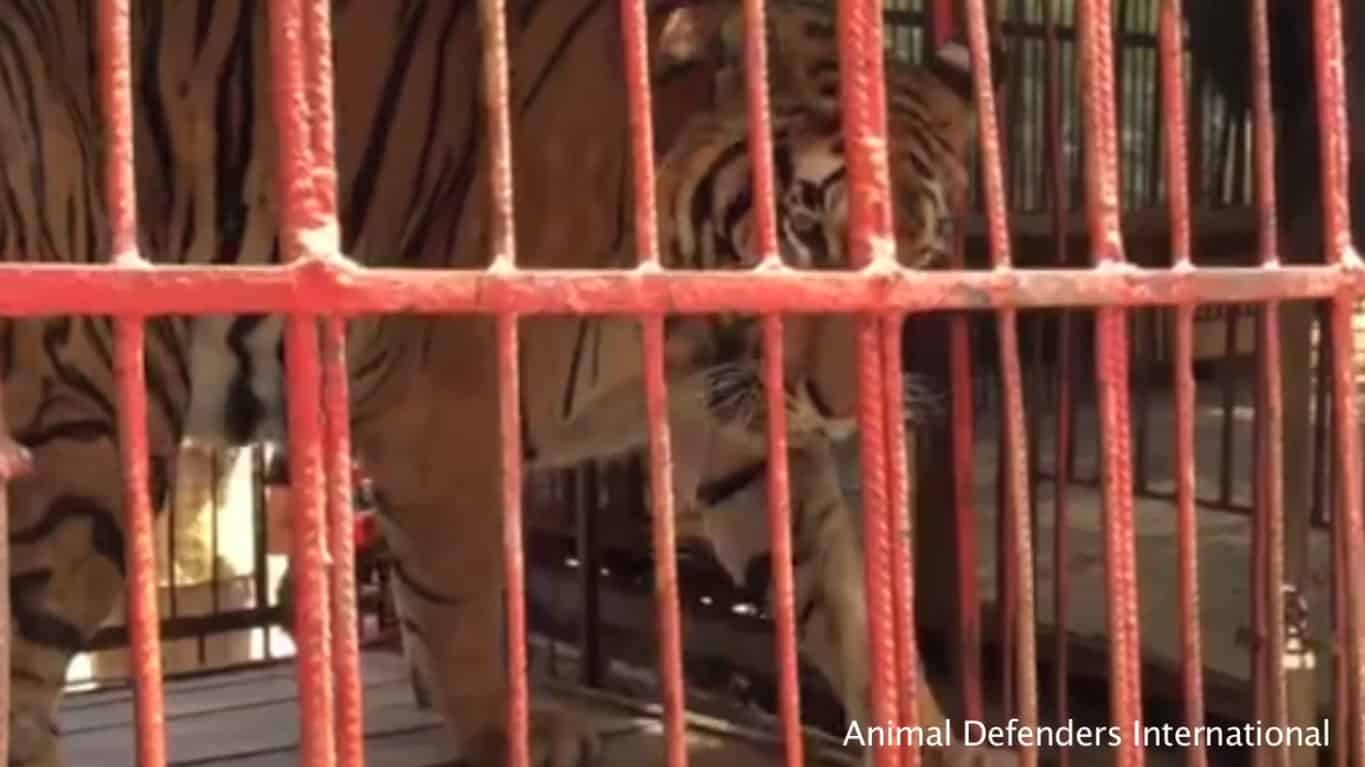 Hoover and other 11 tigers lived for 12 years inside cages. They were enslaved for humans’ entertainment. Trainers whipped and beat him to perform tricks on demand. Finally, the circus in Peru was closed, but Hoover’s journey doesn’t end… 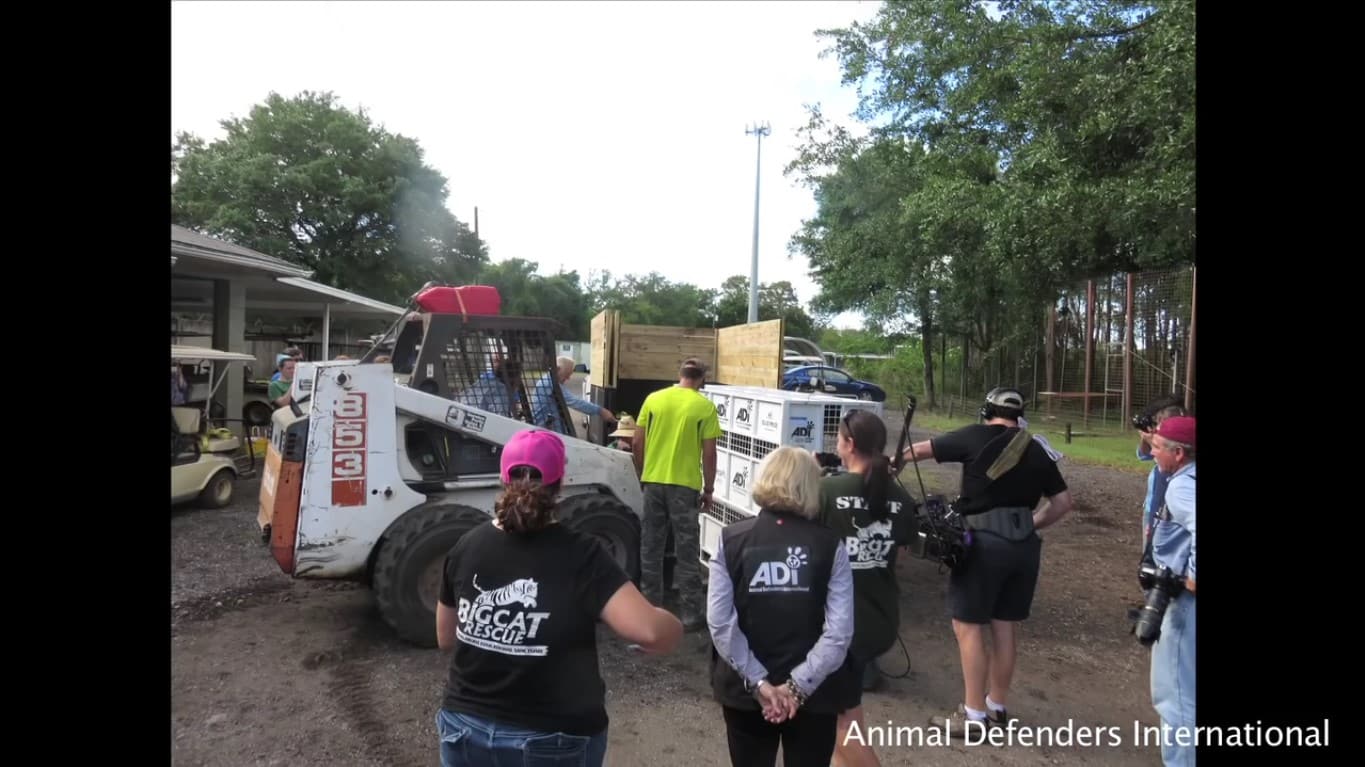 The circus was finally closed after Peru outlawed the industry in 2011, but instead of closing it for good, they went underground and just disappeared with their tigers and all other animals. Authorities started looking for them. 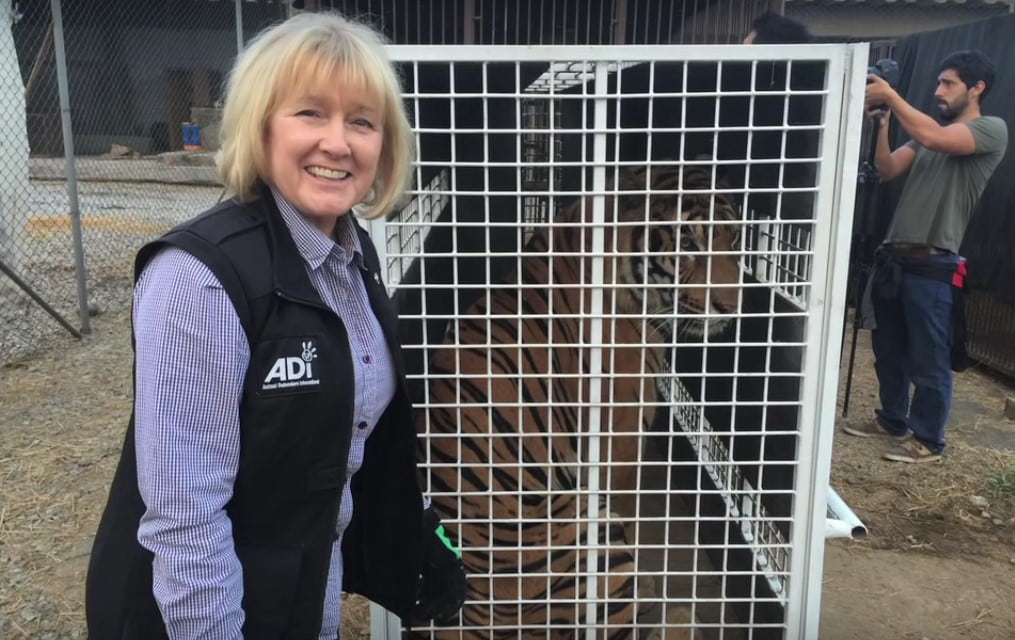 Jan Creamer is the president of Animal Defenders International (ADI), saying in a press release that ‘Hoover is the tiger that almost got away from us.’ Their mission was to rescue all the animals at that circus. 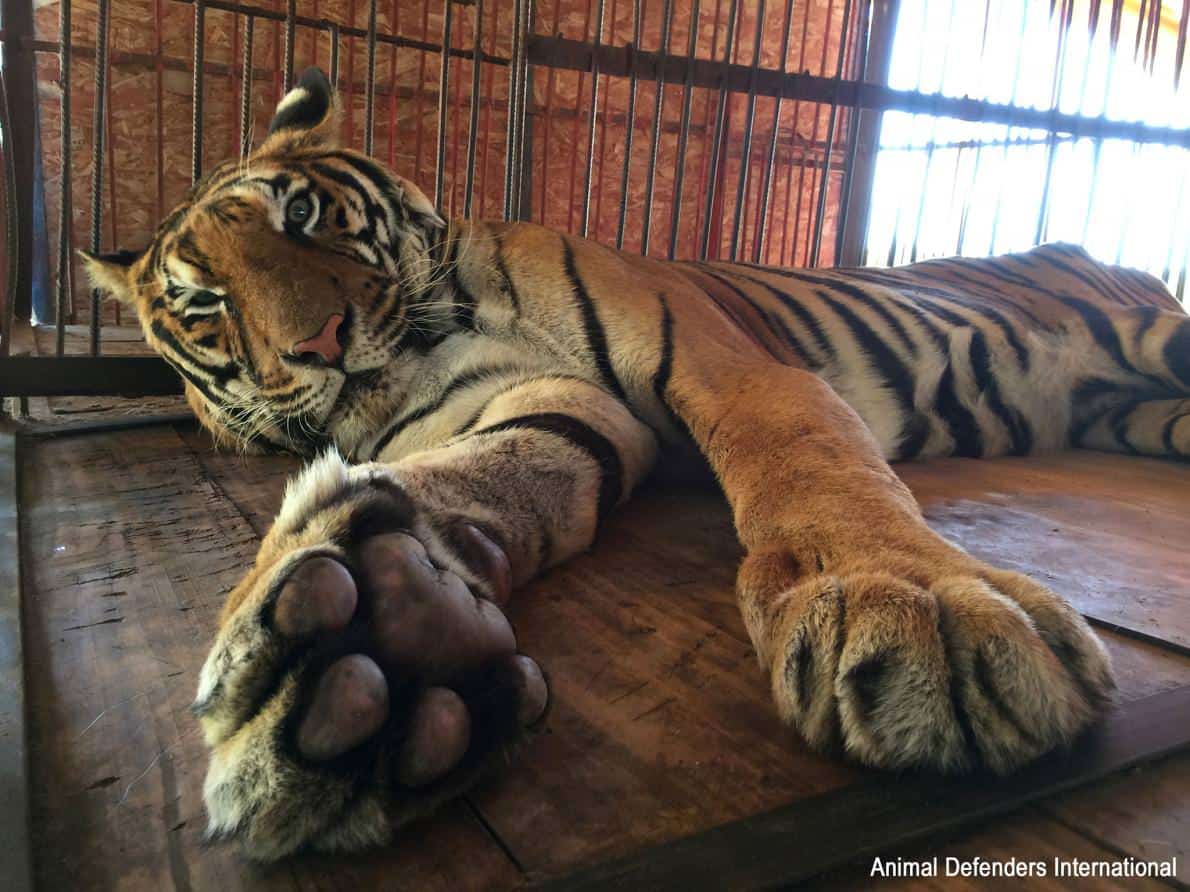 ‘The circus went underground and we had to track him down to rescue him from his sad life of pain and suffering,’ said Creamer. But they finally found them and took hold of Hoover, the last tiger to survive the circus… 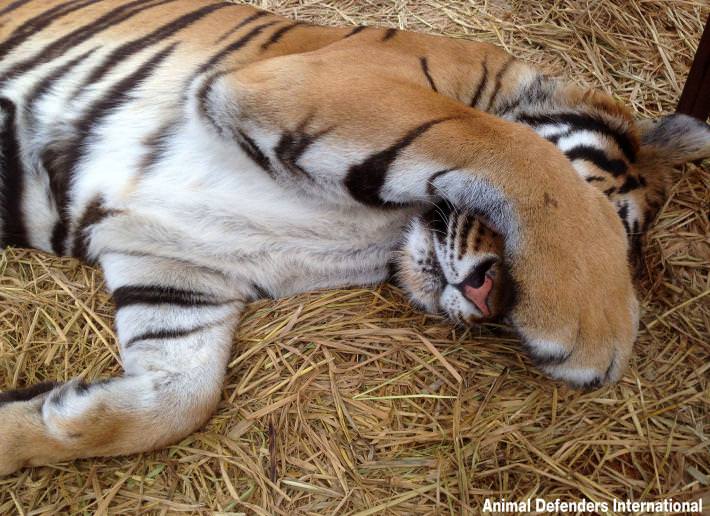 As expected, considering his living conditions, Hoover was sick and emaciated. He was taken to ADI’s temporary rescue center near Lima. There, he received veterinary care, a lot of love and many toys and space for him to recover. 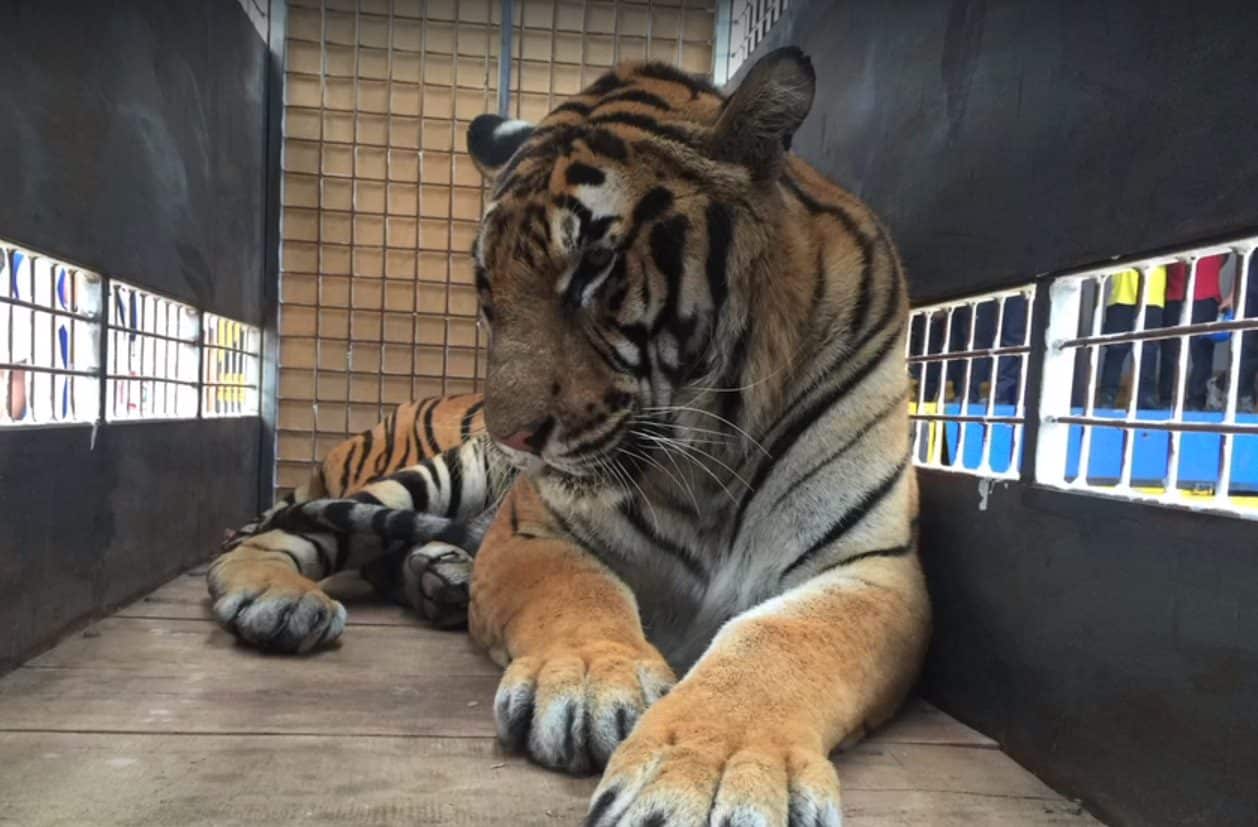 Hoover turned 12 years old while being in the care of ADI and his best birthday present was a new life and home in America. He would go to a sanctuary and have his own huge enclosure. His reaction was unbelievable! 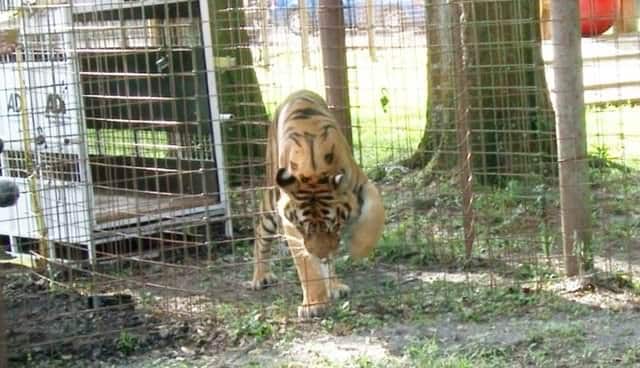 After a year after he was rescued, Hoover was ready to go to a new home. Creamer explained that “he has special needs and deserves special attention – and that is exactly the kind of care that Big Cat Rescue does so well.”

13. Hoover is Alive Thanks to ADI 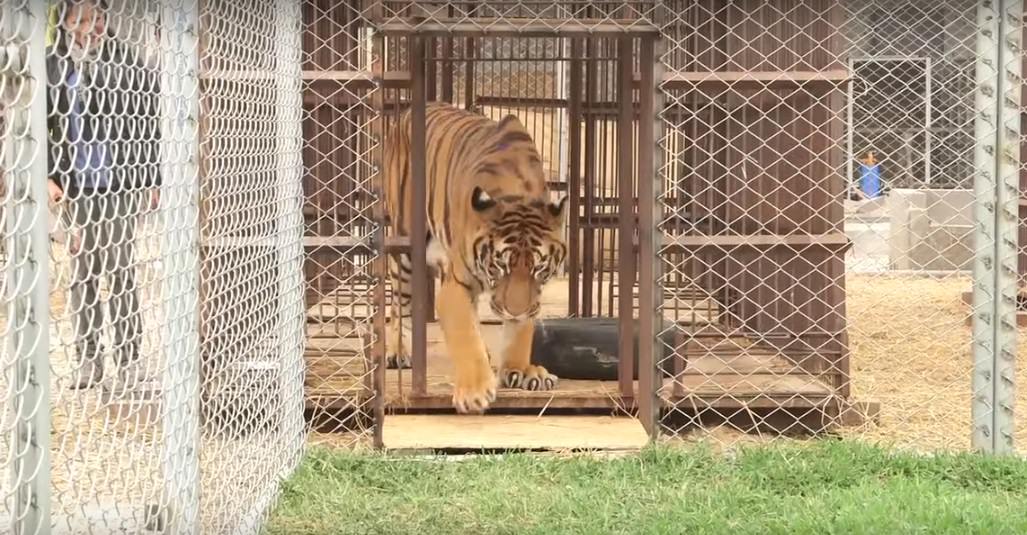 On their Facebook page, the founder of Big Cat Rescue (BCR), Carole Baskin, wrote that they’re forever ‘grateful that Animal Defenders International rescued Hoover, cared for him during the long process of obtaining permits, and has now transported him to America.’

12. Ready To Show Hoover His Crib 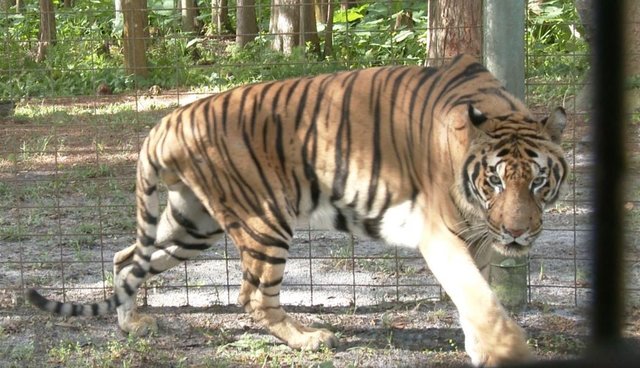 Baskin continued explaining how much care will be invested into Hoover’s wellbeing, saying that they will ‘provide him with a safe, peaceful home at our sanctuary.’ He will relax ‘in the shady grass, lounging on his platforms and cooling off in our lake.’ 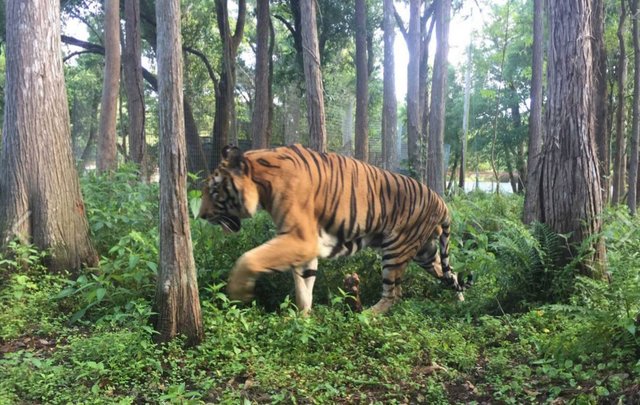 ‘After all his suffering, we hope people will take Hoover to their hearts like we have and donate towards his lifetime care,’ added Baskin. Tampa, Florida is the best place a big cat can live. Check it out in the next photos! 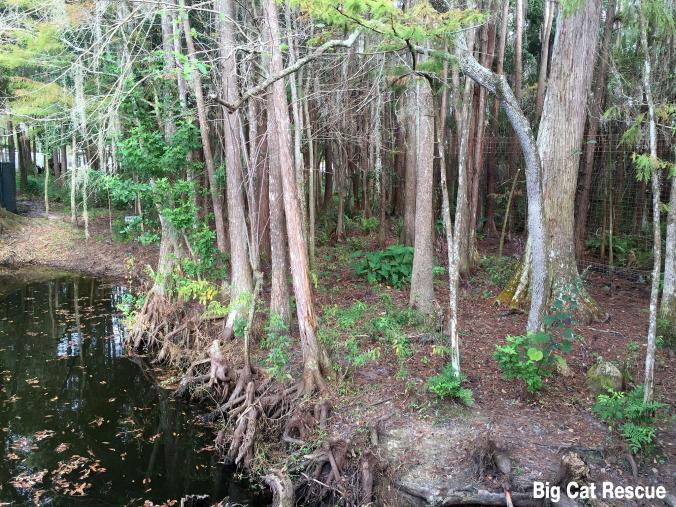 The PR representative for BCR, Susan Bass, said that ‘Hoover is settling in at Big Cat Rescue incredibly well.’ He started by checking his enclosure… You won’t believe what he did first! 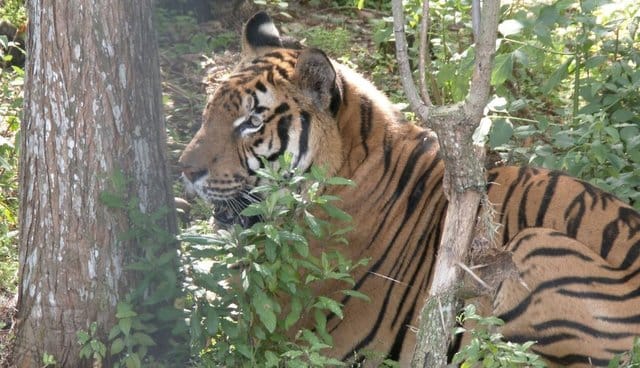 Hoover first took a few laps ‘around the perimeter of his one-acre wooded enclosure to assess any threats’ said Bass. But after seeing that he’s safe, he ‘laid down and relaxed amidst the thick foliage and shade trees,’ she added. 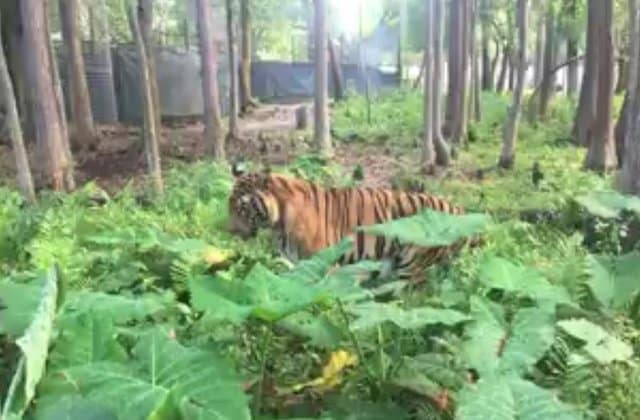 When we say that Big Cat Rescue is the best home a big cat would ever want, we mean that they have huge areas with trees, grass, a spring and lakes, and many toys around. Here’s a few of them… 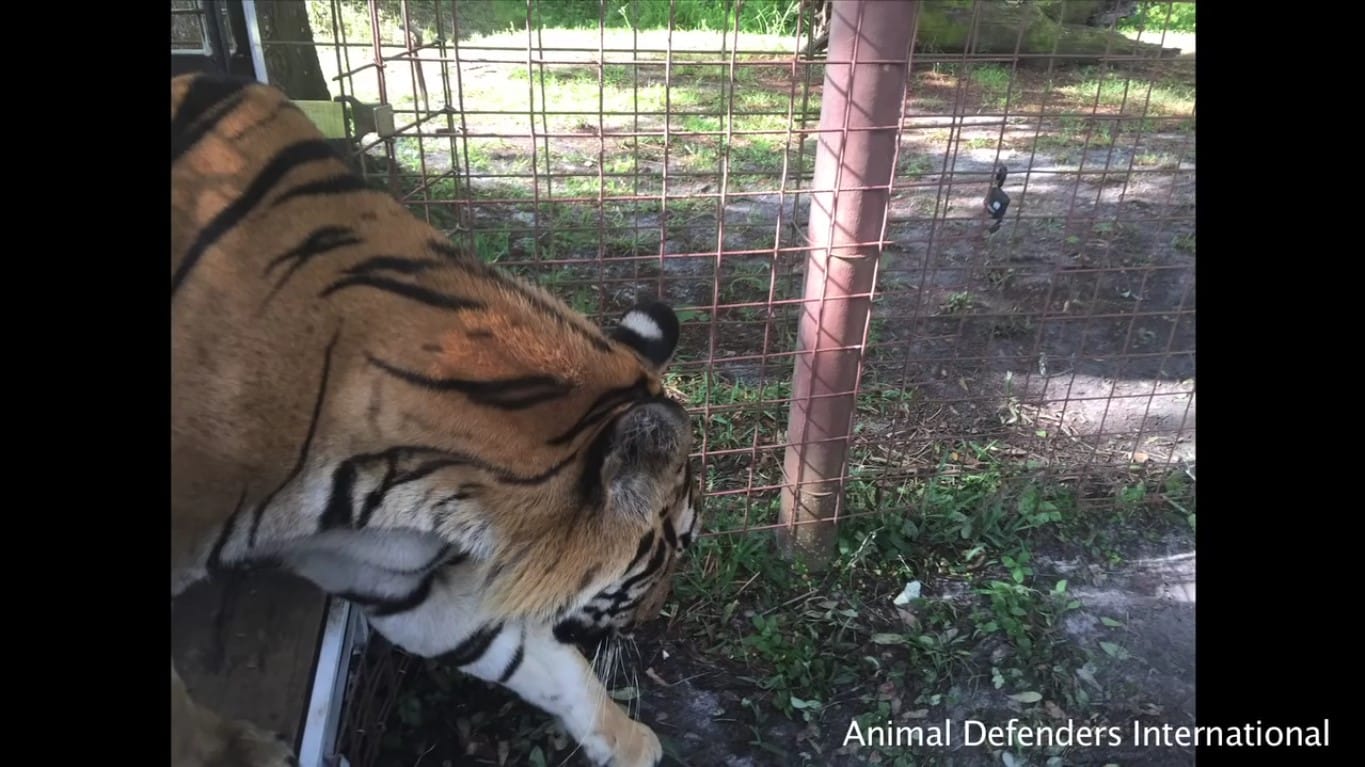 Hoover gets a lot of dens to hide, platforms full of grass to chill in the open, and plenty of toys. He gets many treats, medical and dental care and great nutrition. Wait until you see how he reacted seeing the lake! 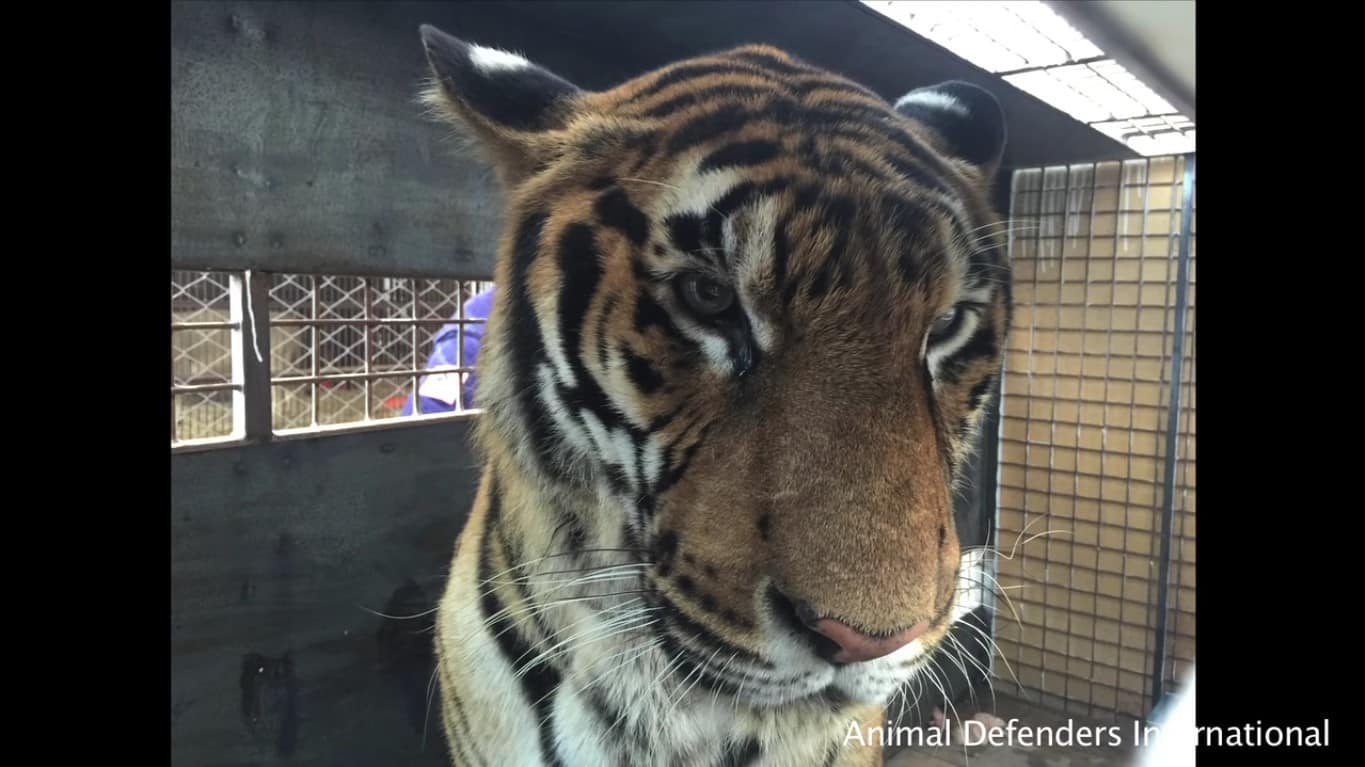 This cat made baby steps and adjust to the new environment. The lake was a mystery for him too, says Bass: ‘He was a bit unsure of the lake at first, having never had access to a body of water before.’ 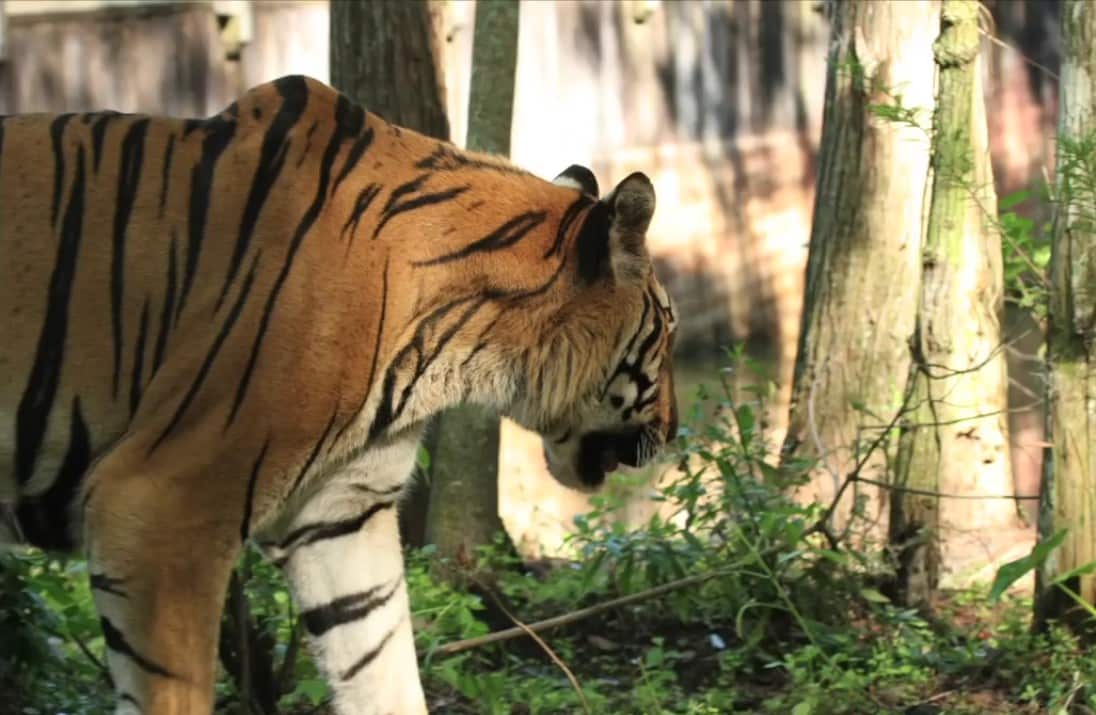 Finally, Hoover ‘lapped up some water and later even took a swim.’ He became more confident in his new home and revealed that he was an adorable big kitty! This is what Bass said after Hoover got comfy…

4. Hoover Is Such a Spoiled Cat! 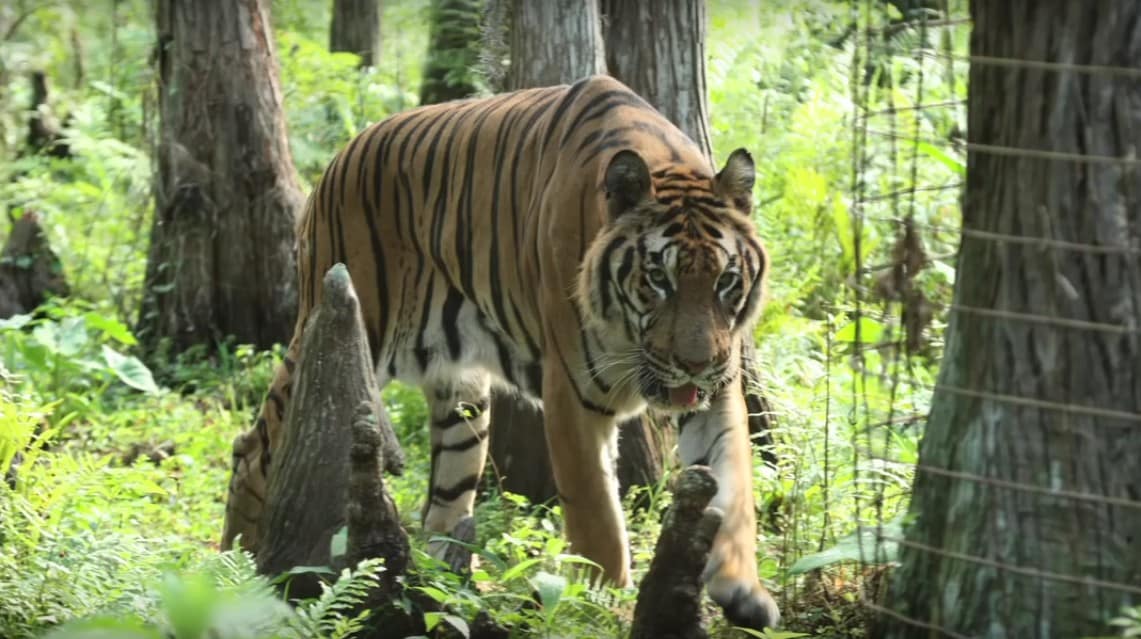 ‘He’s a very laid-back, sweet boy and we plan to spoil him and make his years at Big Cat Rescue the very best we can,’ added Bass. 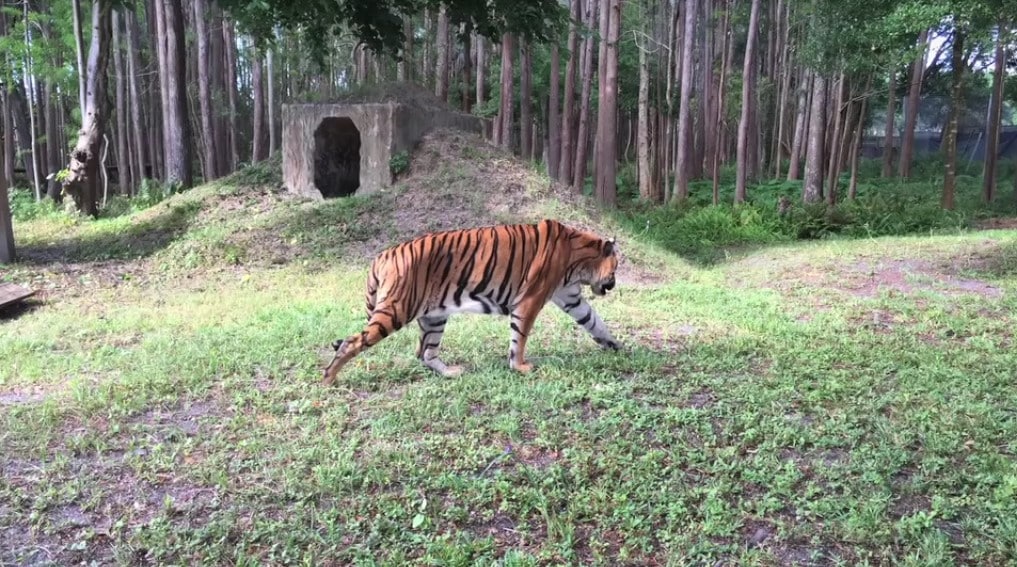 ADI’s rescue mission is called ‘Operation Spirit of Freedom,’ and they have saved over 100 wild animals from circuses all over Peru. This is the largest rescued of its kind. They’ve even helped the wild animals to go back home… 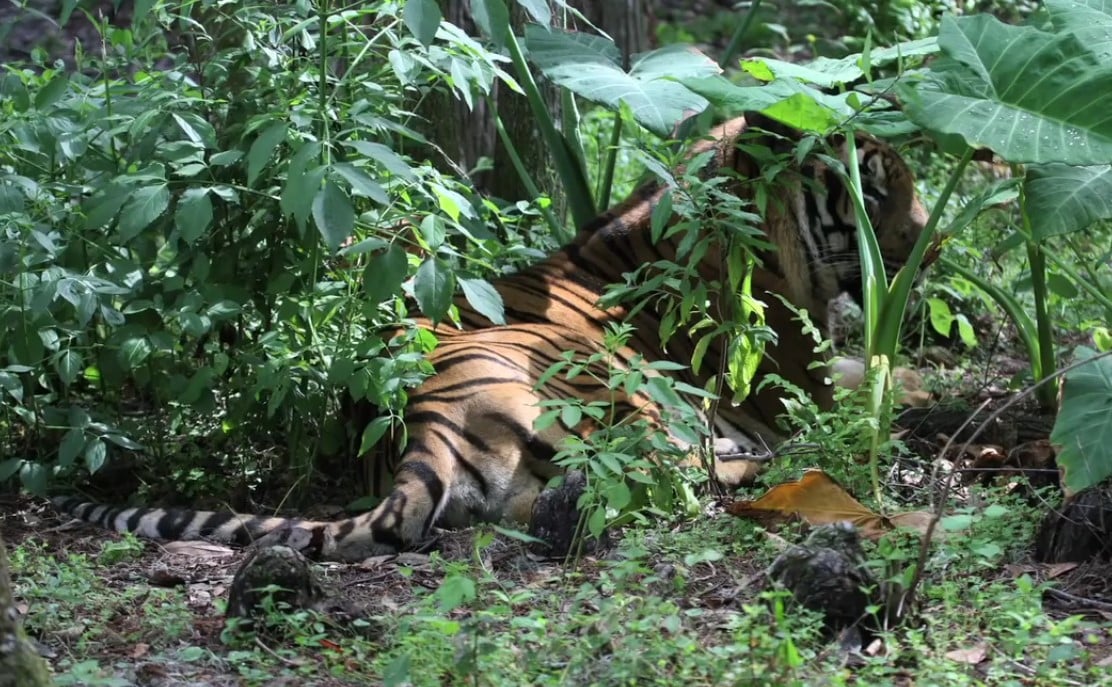 Among the animals they saved were bears, birds, monkeys, reptiles, lions, and tigers. ADI has also built homes for the ones that were sent in the natural Amazon habitats. Moreover, 33 lions were sent home to Africa! 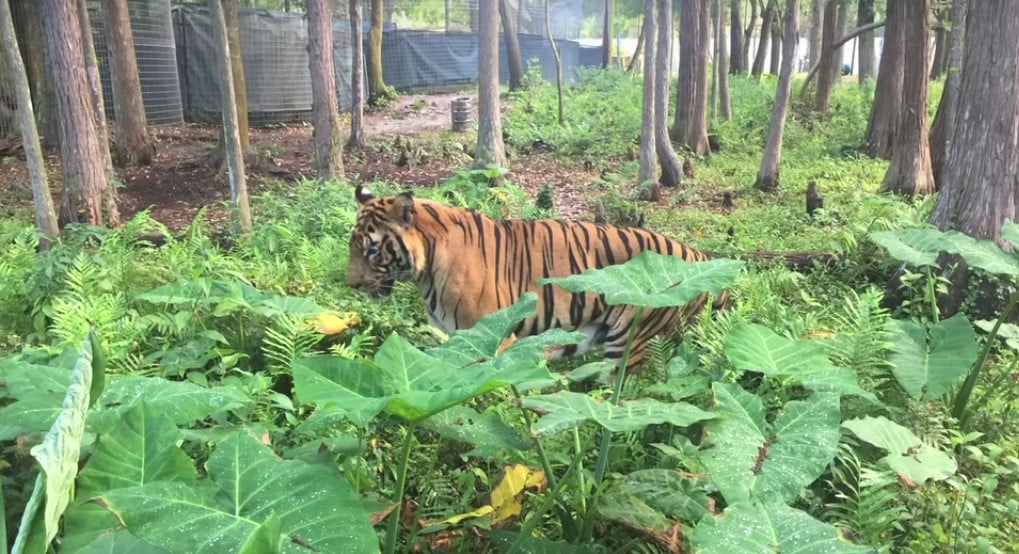 Hoover’s home would remain in Florida, where he now lives happily and safely in his huge enclosure, thanks to ADI, the Big Cat Rescue and many donors that made everything possible.