When this mama pup found out she was pregnant everyone in the family was ecstatic. Finally, the day that everyone had been waiting for came and she gave birth to a litter of puppies. However, they didn’t quite look the way everyone expected… 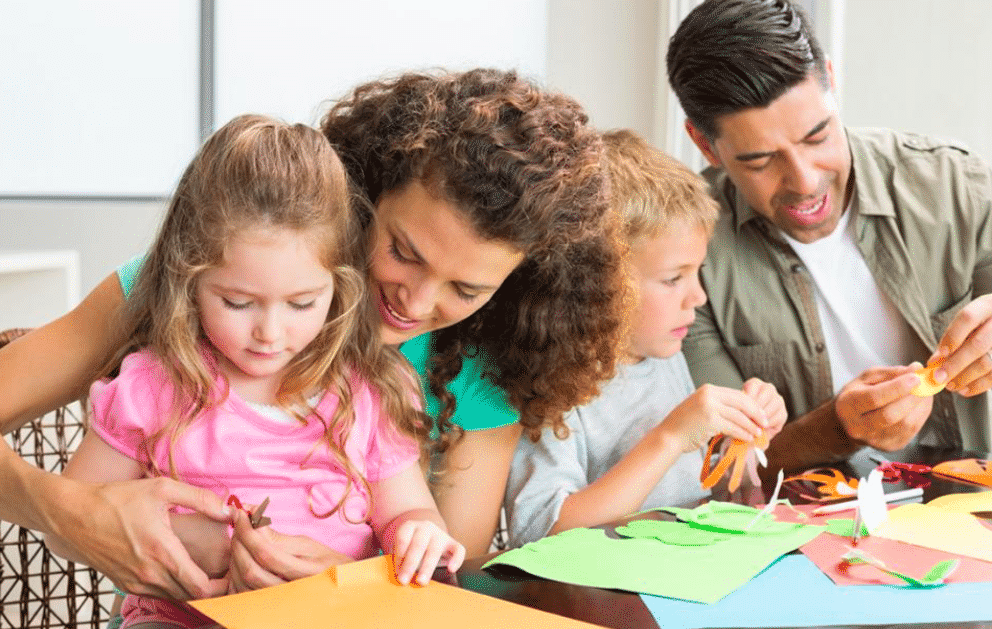 It doesn’t take a genius to figure out that kids tend to look like their parents. Even before the discovery of DNA, people had a general understanding that their kids would resemble them in some way. 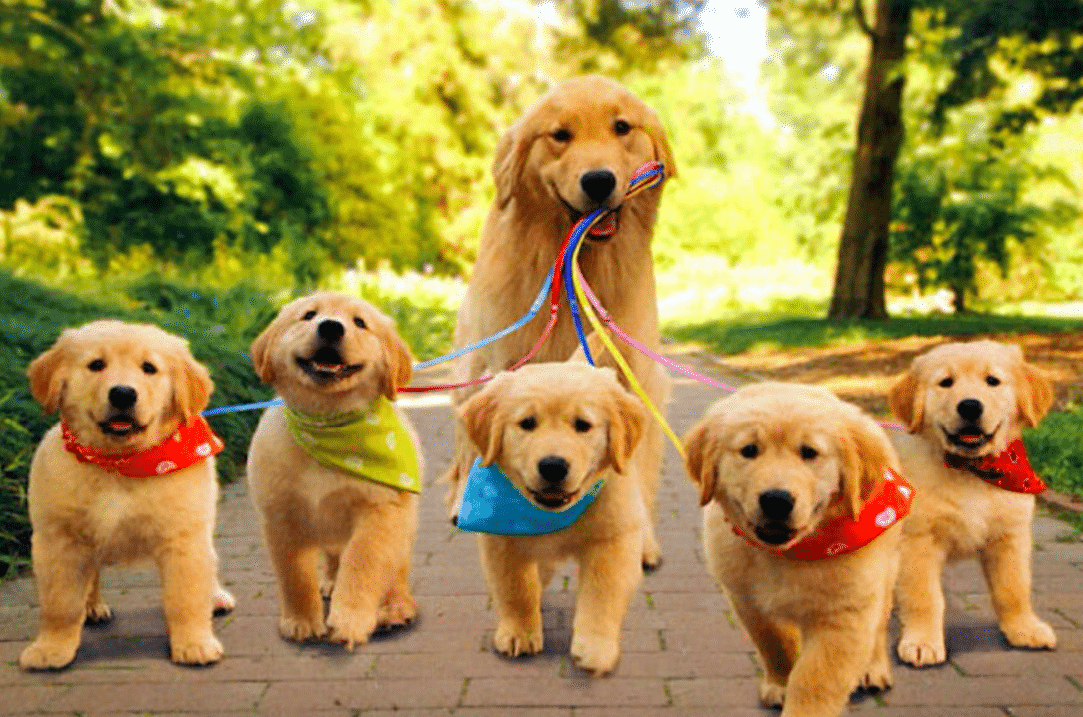 The same general rules apply to many animal species as well. That’s why when this family’s dog gave birth to a litter of puppies, they were completely blown away by what they looked like! 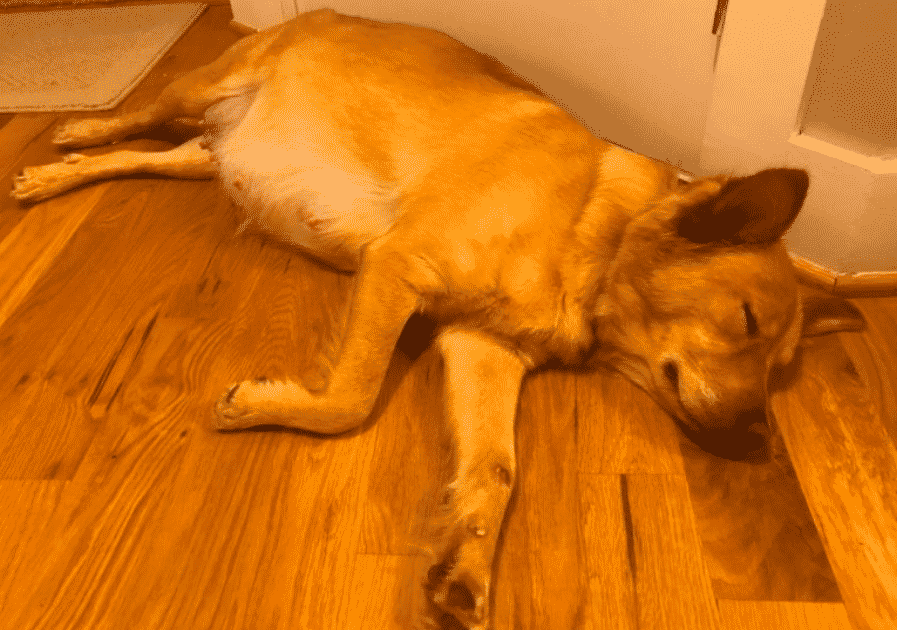 This is Rosie, a sweet rescue dog. She is a Golden Retriever mix who was surrendered at the county shelter. However, she was unlike many of the other dogs that show up at the shelter. 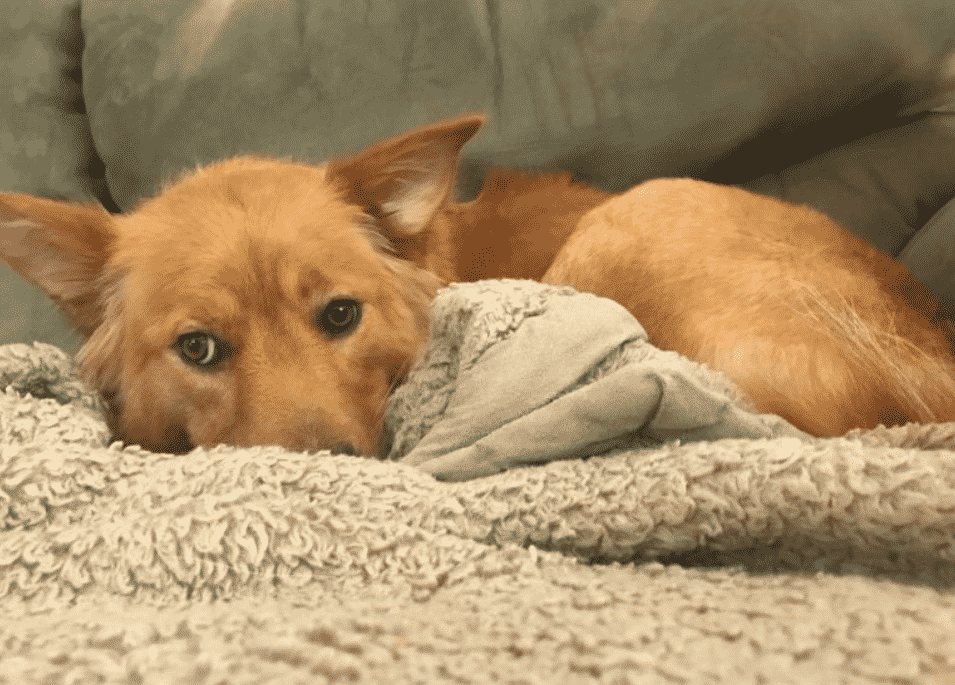 When Rosie was brought over to the shelter she was already in the advanced stages of pregnancy. She was in need of a lot of help. So she was quickly taken in by Neuse River Golden Retriever Rescue. 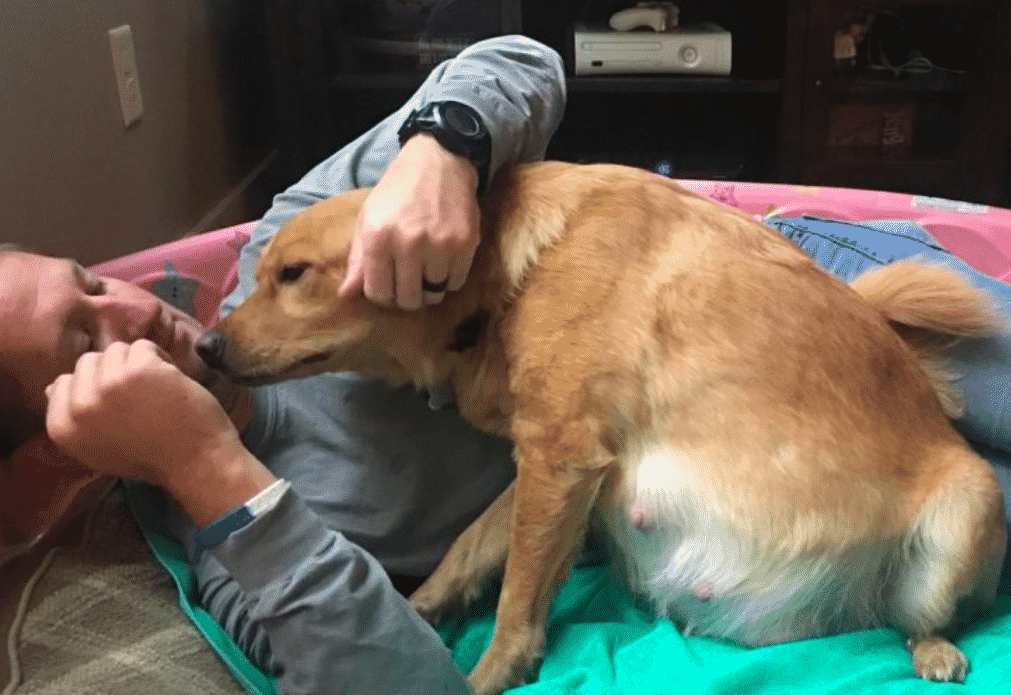 Rosie quickly got a ton of offers from different homes looking to foster home. Eventually, she was taken in by John and Katie Black. The Black’s have fostered over 20 dogs since 2009 and have a ton of experience in making a dog feel welcome and loved. 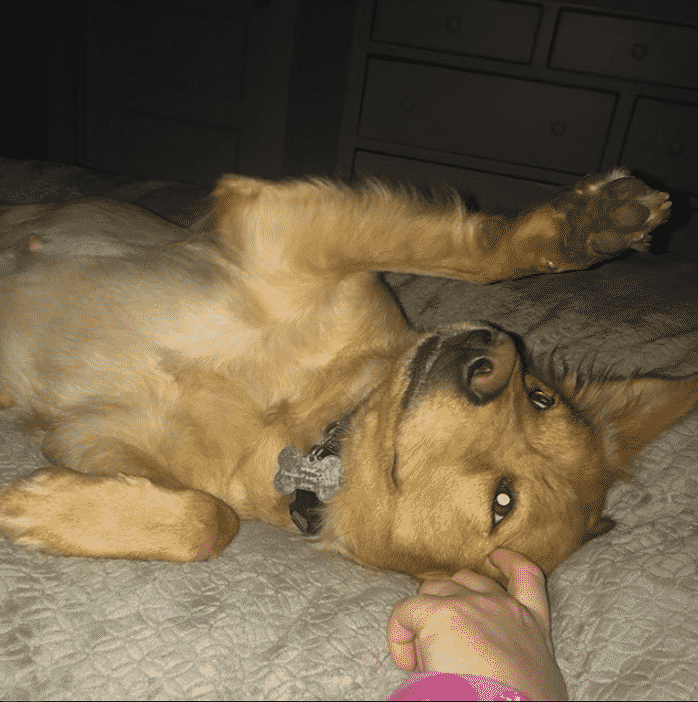 So Rosie was brought to the Black’s home where she began to get settled in. The Black’s began to get all of the preparations ready for when Rosie would finally give birth. Everyone was so excited! 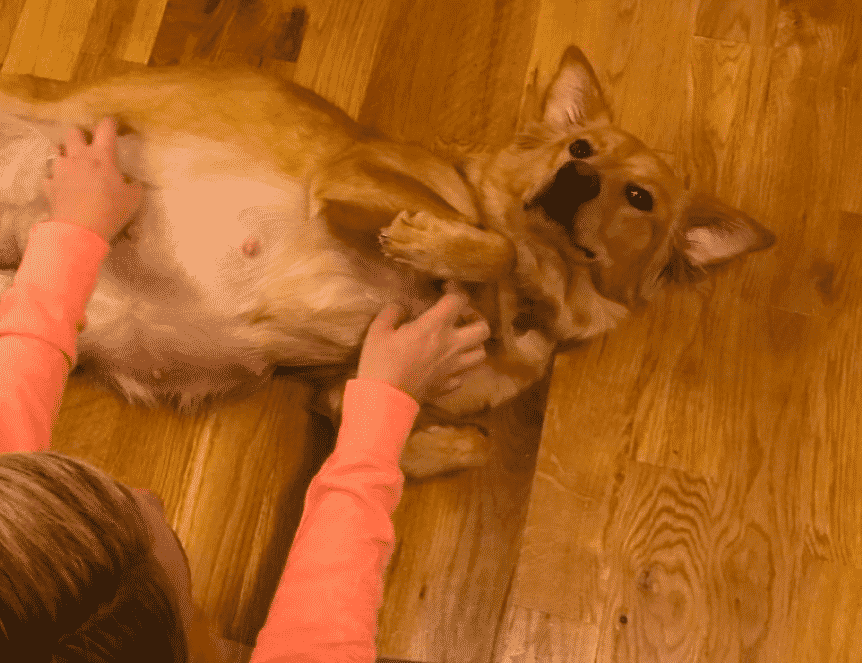 Finally, the day had come! Rosie was in labor and was getting ready to finally give birth. Everyone was so excited as they gathered around to see the puppies…however, they didn’t look quite how they expected them to. 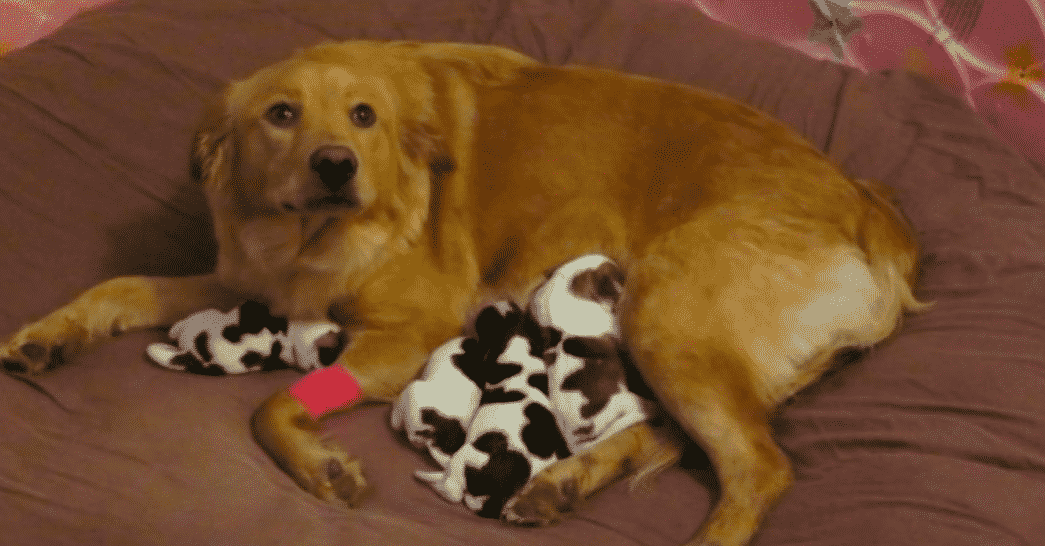 In fact, Katie was so shocked by the puppies appearance that she even posted some photos on Reddit. On the post she wrote: “Not quite what we were expecting. Our foster dog and Golden mix gave birth yesterday. To baby cows.” 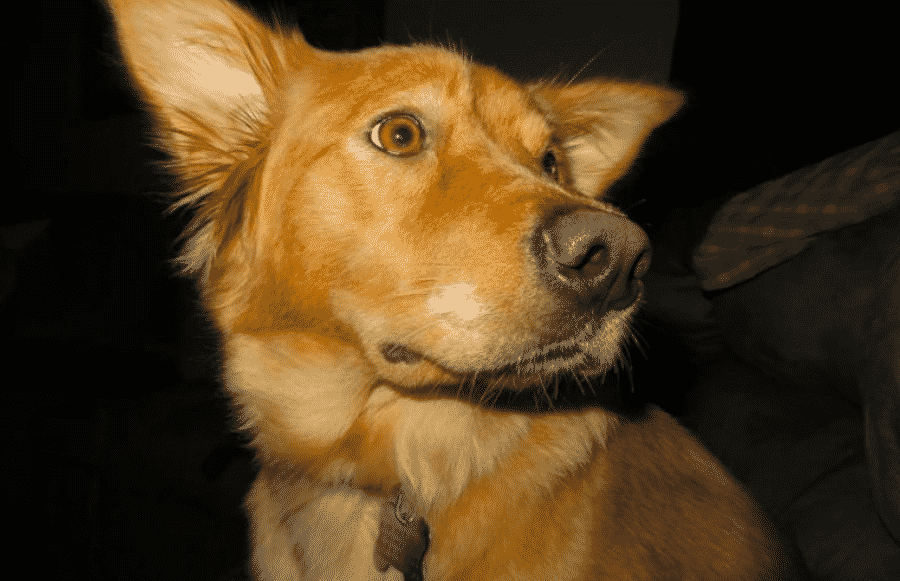 So Rosie had given birth to a beautiful litter of healthy puppies. However, they really looked just like a bunch of baby cows. Rosie also looked pretty confused by the predicament. 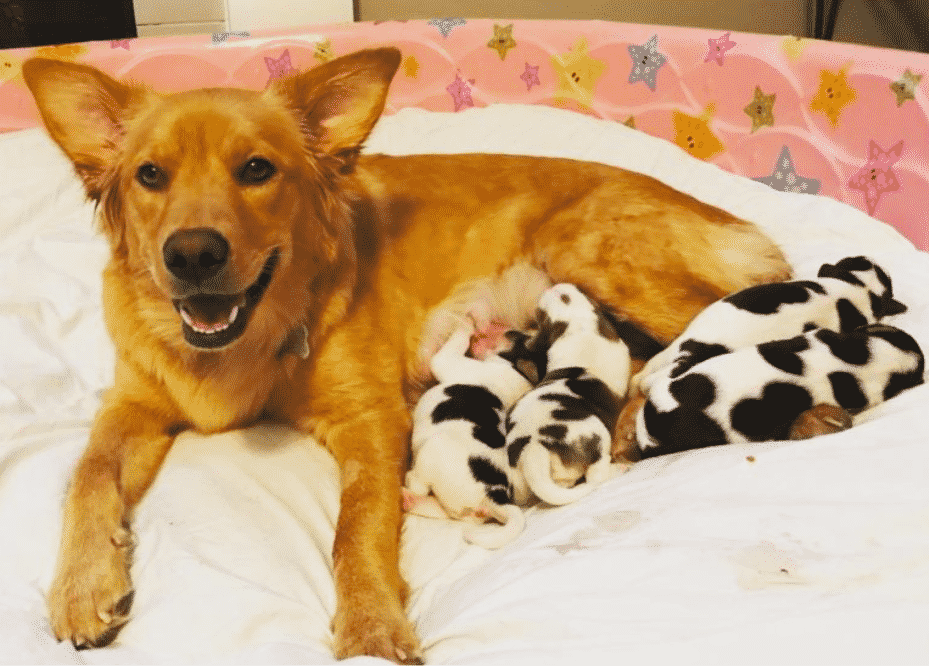 Even though her babies don’t look anything like her, that hasn’t stopped Rosie from being a proud mom. She is in love with her four babies and is constantly going out of her way to take care of them. 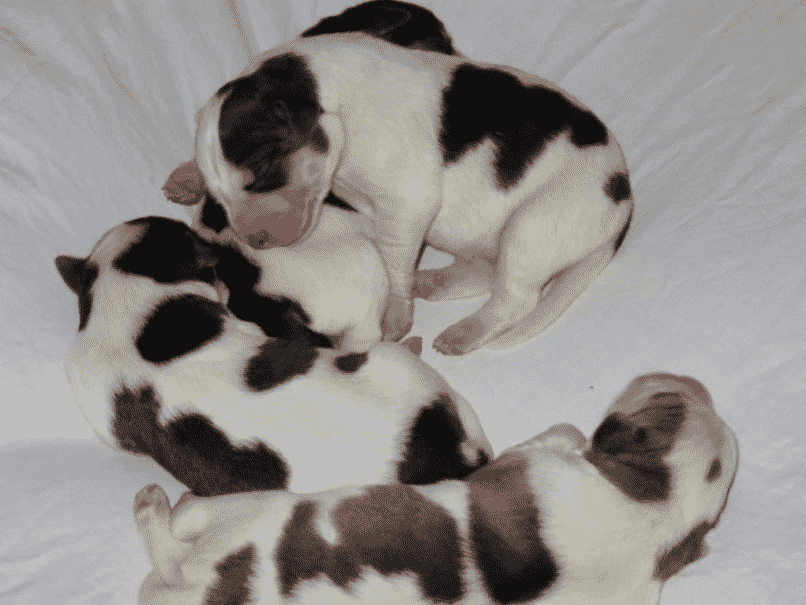 Katie and John then took it upon themselves to name each one of the black and white spotted pups. Their names are Daisy, Betsy, Clarabelle, and Moo. Their names seem pretty fitting considering their appearance! 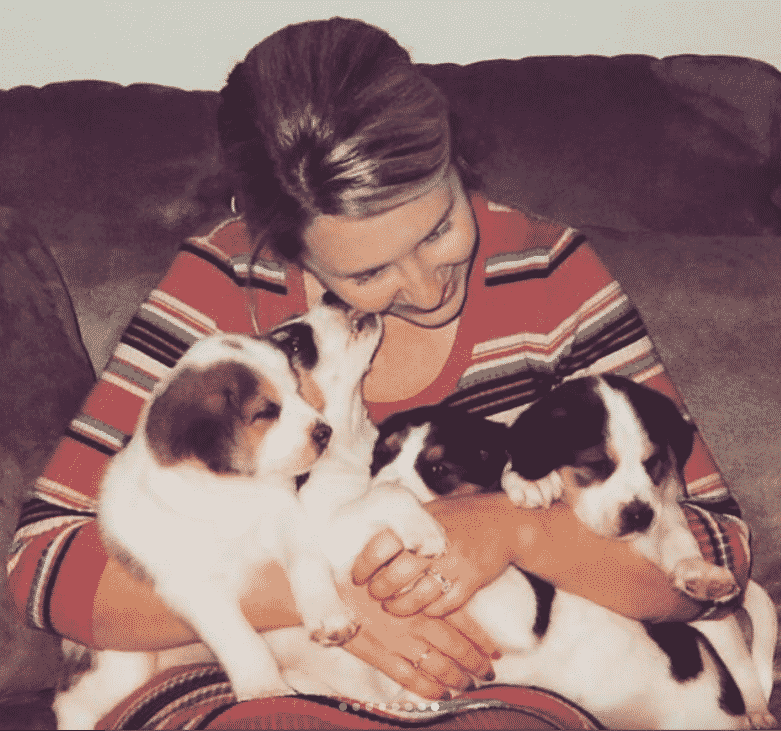 No one is quite sure who the daddy of Rosie’s babies are. However, one thing is certain, he definitely wasn’t a Golden Retriever. They definitely took after their father, looks wise. 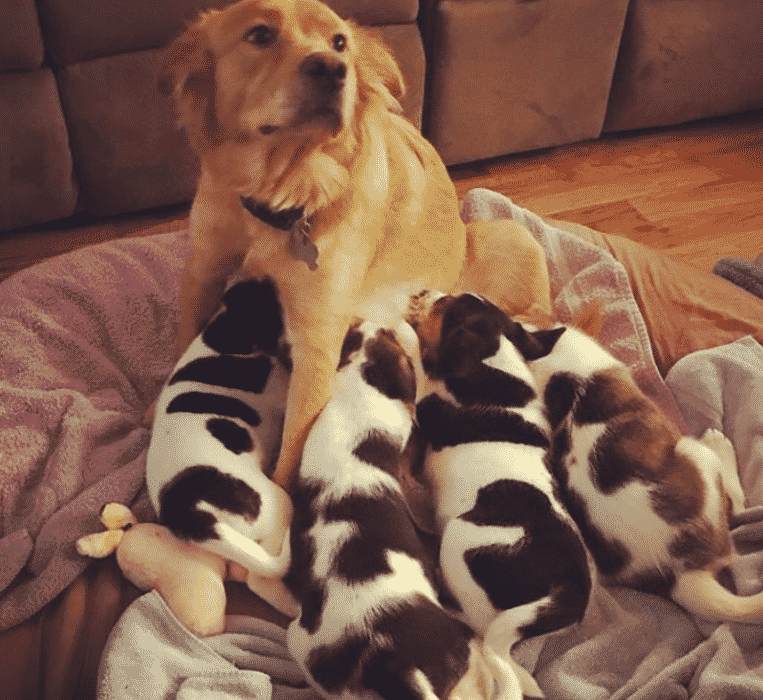 Rosie has been taking her mom duties very seriously. She has been continuing to nurse and nurture her puppies so that they grow up big and strong. 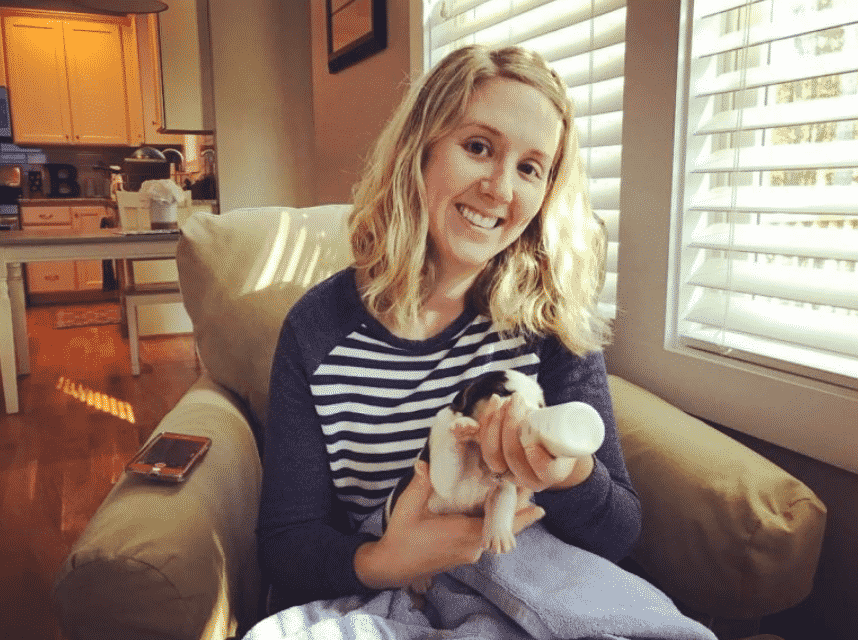 The Black’s will get the pleasure of watching the puppies grow until they are found a permanent home. For now, Rosie has been nursing the puppies in the comfort of the Black’s home and it has been a great treat for her. 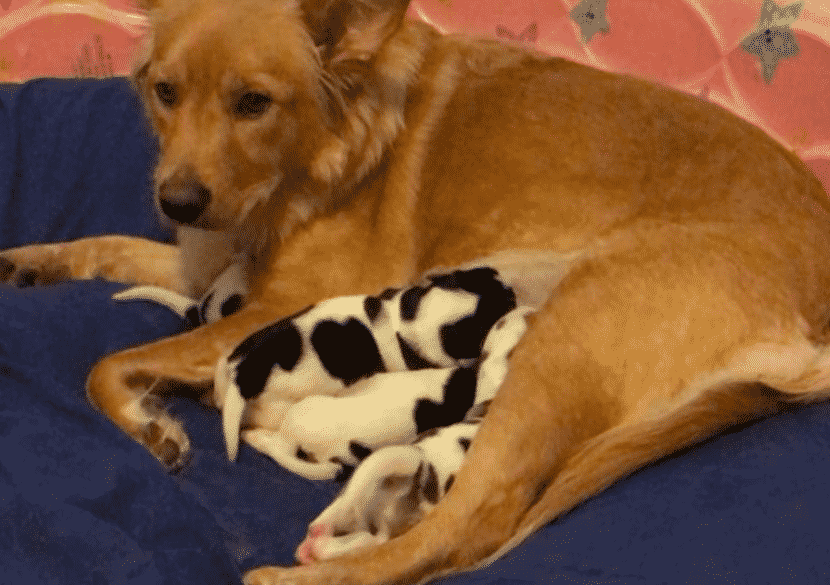 The Black’s were interested in finding out who the dad was so they decided to get the results. After all, people looking to adopt also wanted to know what breed of dog they were getting. You won’t believe the results! 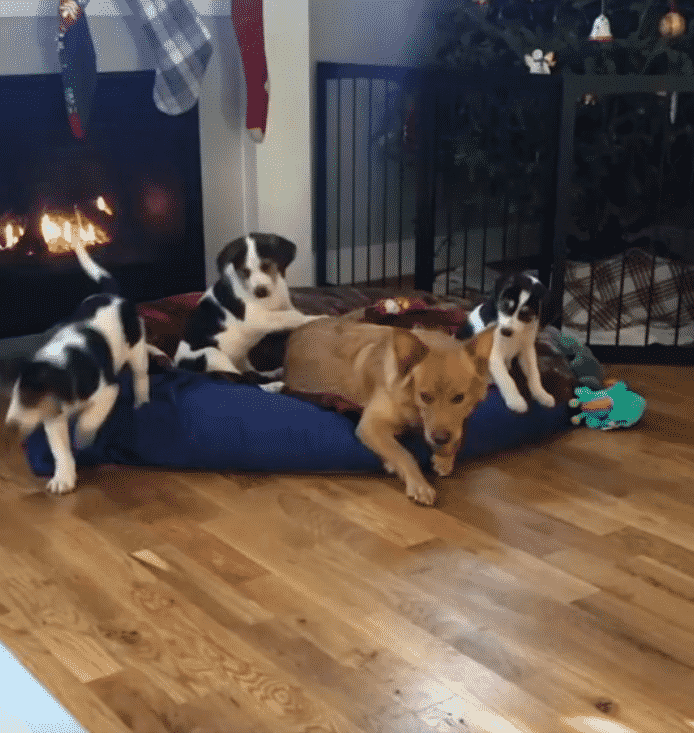 From the testing done, it was discovered that the pups dad is an American Foxhound. The Black’s posted the results on their Instagram @ourgoldenyears. Everyone was shocked by the results! 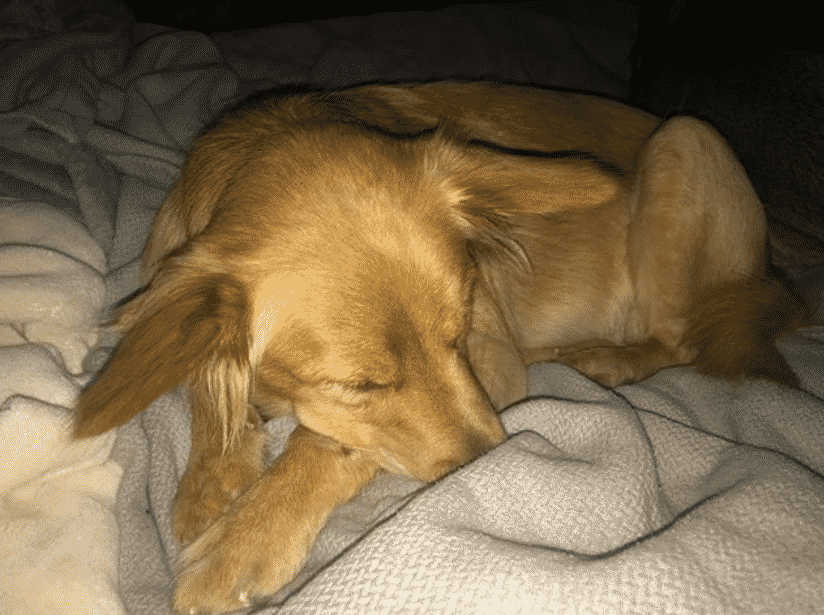 They also happened to find out Rosie’s results as well. Rosie happens to be a mix between four different dogs, who would have thought?! She’s a Labrador Retriever/Weimaraner Cross mixed with Chihuahua and another unidentified mixed breed. 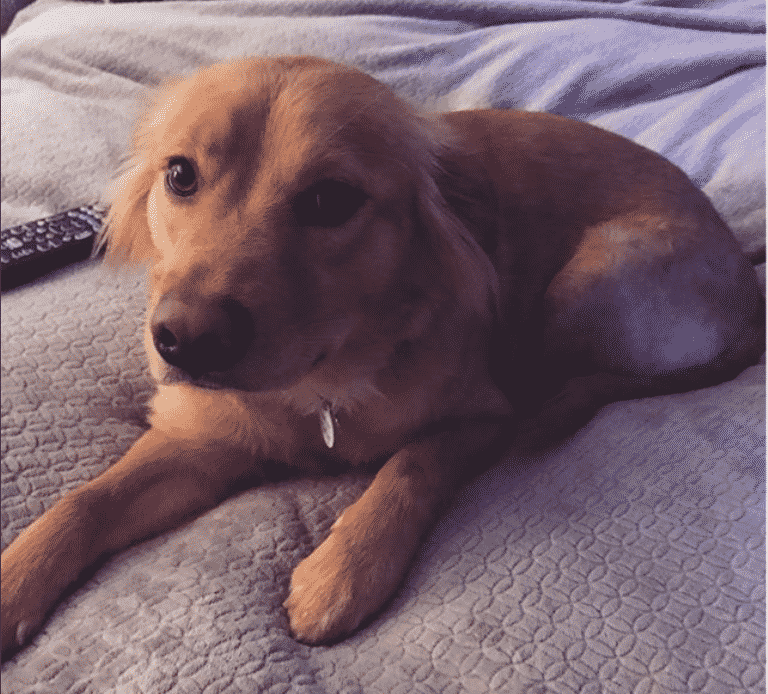 “I did a double take at that too, lol but I can actually see if in Rosie’s face a little. She’s actually really small – I’m sure much smaller than she looks in photos,” Katie wrote, in response to Rosie’s test results stating that she was part Chihuahua. 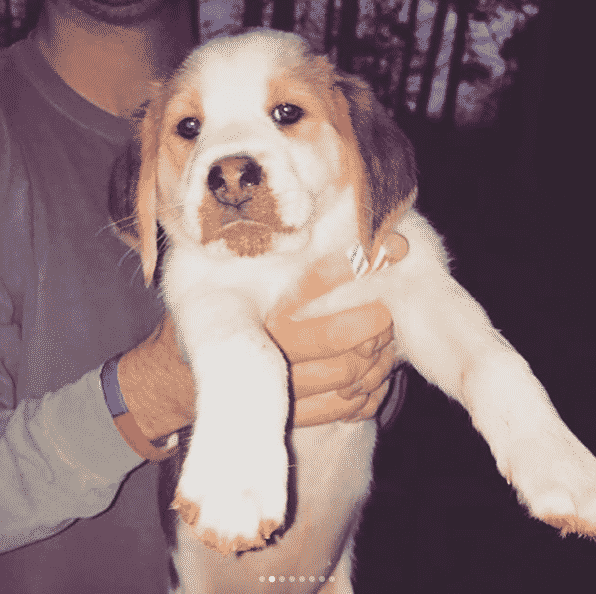 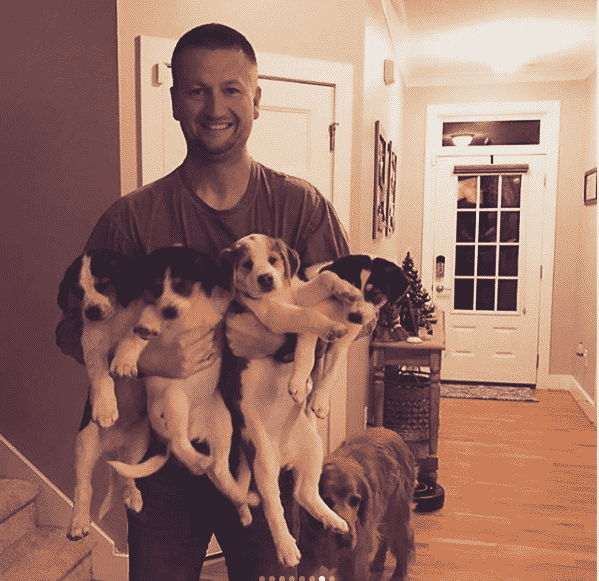 It is so great to know that all of the puppies and their mama found forever homes that will love them and care for them! Despite their unusual initial appearance, these puppies are undeniably cute and their mama will forever be proud.