When a BBC South reporter spotted an unconscious bird on the road, he knew he had to help it. He quickly scooped the bird up and placed it into his car. However, everything went haywire when the bird regained consciousness and left the reporter with the most unforgettable animal rescue of his life. 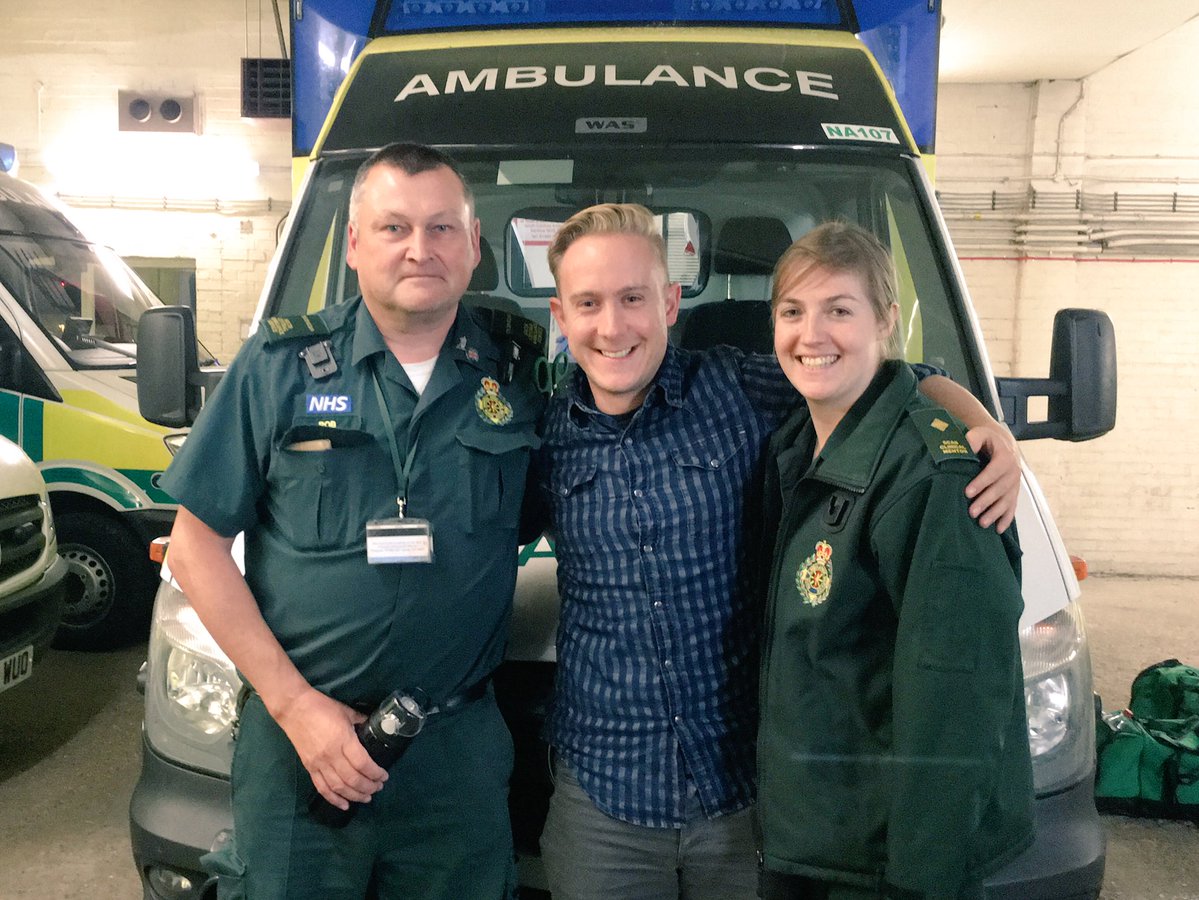 Matt Graveling is a senior reporter for BBC South Today. On April 12th, he was on a trip to cover a daily story. Everything was going as planned so far… 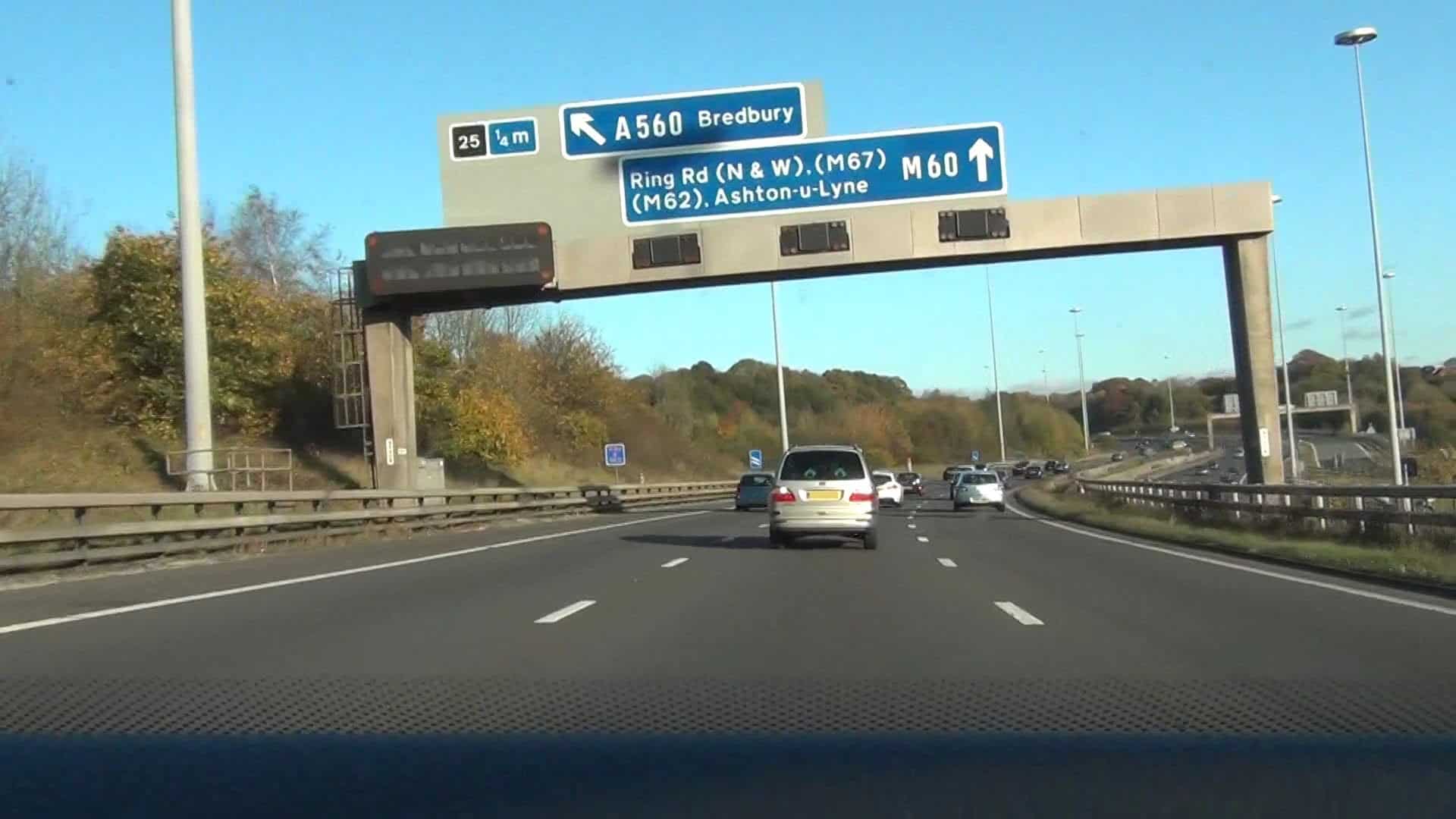 Graveling was driving to a location to film his story around 2:30 pm. It seemed like an ordinary day, but he was soon completely taken by surprise when he saw something on the side of the road. 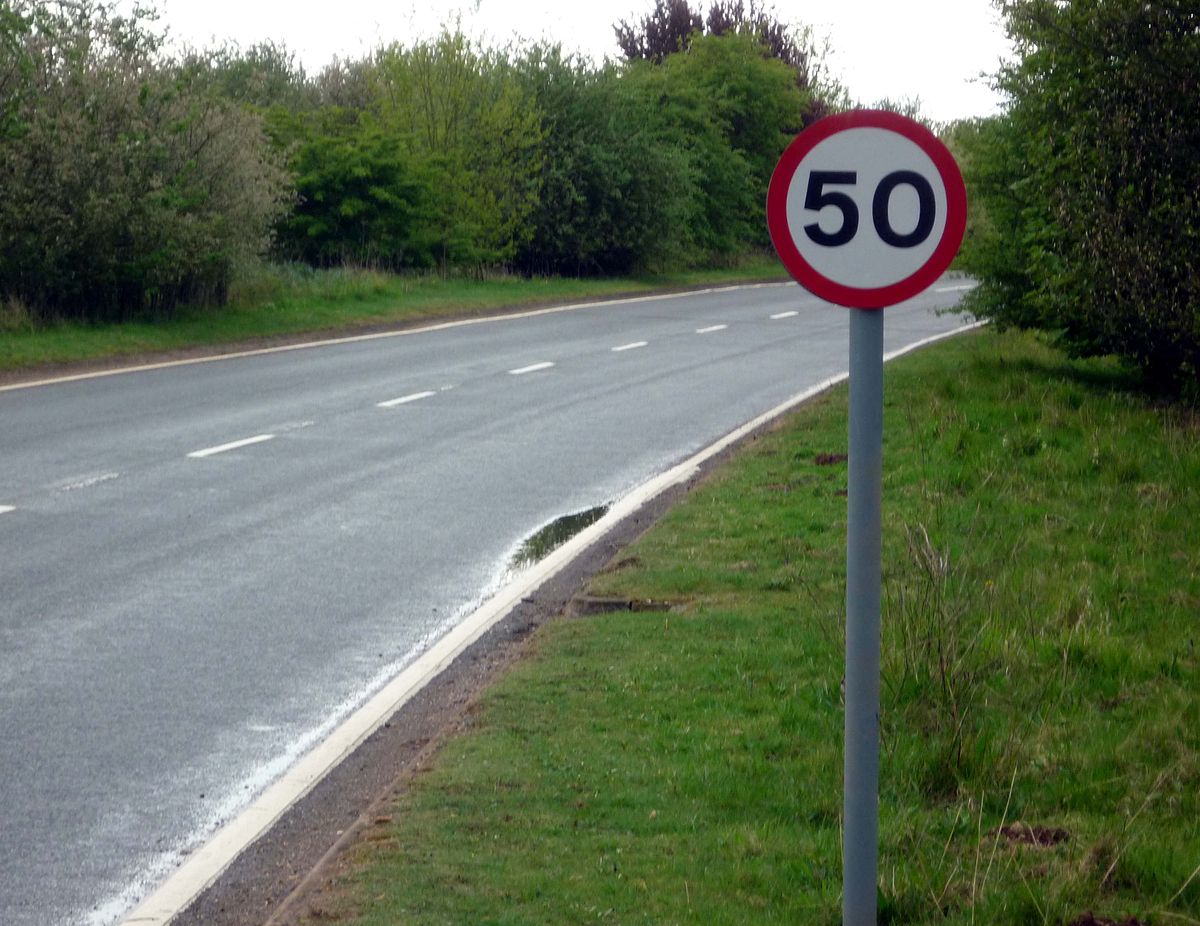 As Graveling was driving to the filming location, he quickly spotted an injured animal off to the side of the road. His curiosity was piqued — he decided to stop the car and see what was wrong. That’s when he realized what the animal was… 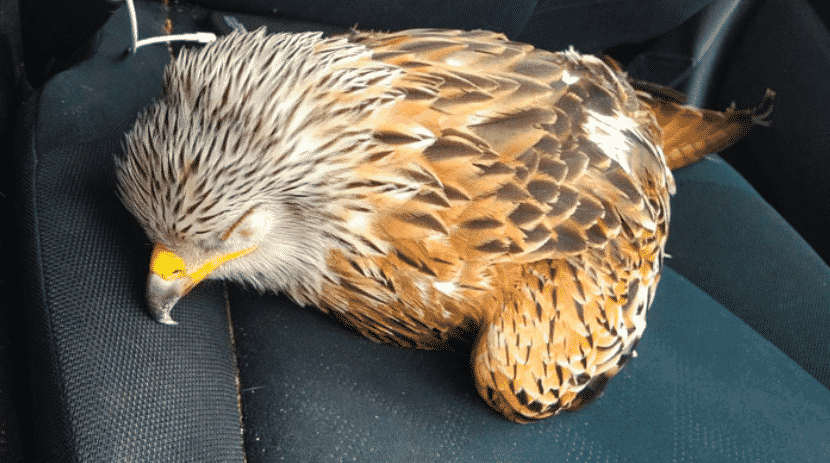 On the side of the road was a very large yet unconscious bird. He paused for a moment and marveled at the size of its big talons. Such big claws indicated it was a bird of prey and thus could be dangerous. Still, he couldn’t stop himself from trying to save it. 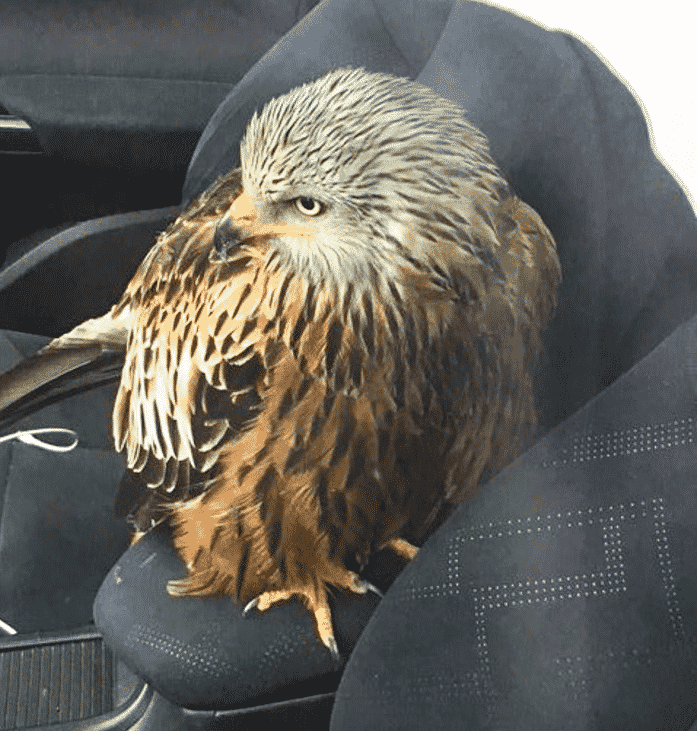 So Graveling scooped up the bird and put it into his car, intending to take it somewhere safe. He wanted to be able to save the bird’s life but he never expected the catastrophe that would happen next! 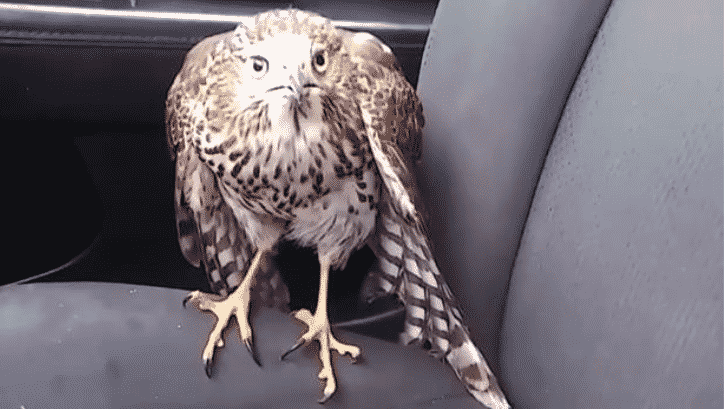 After 15 minutes of being in the car…Graveling noticed something was amiss. The bird had begun to stir….and he was trapped in the car with it. The situation soon turned quite scary. 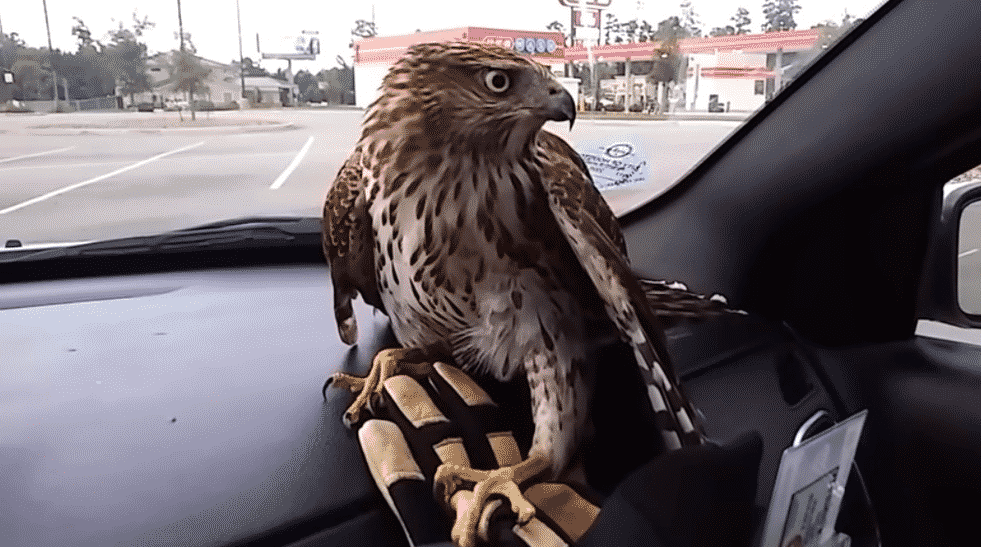 After about 15 minutes of driving, the bird started to open its eyes, and ruffle its feathers,” Graveling told the Press Association. That’s when Graveling realized that driving with the bird wasn’t such a great idea. He needed to get it out…fast! 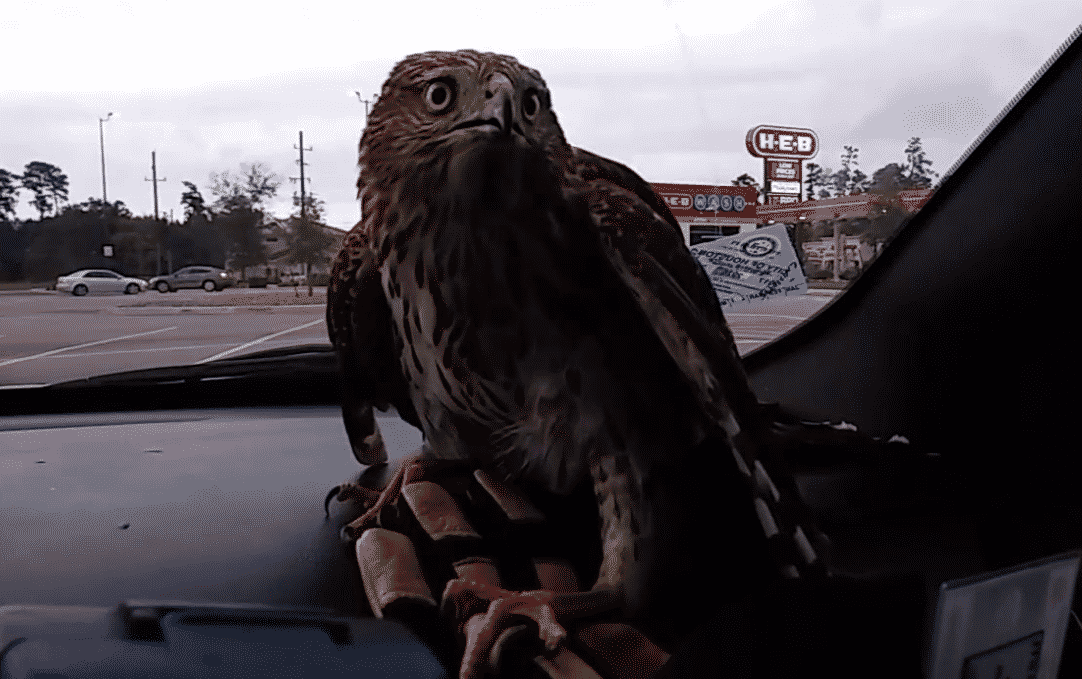 Graveling looked over at his passenger seat and was pretty shocked by the sight. “Then all of a sudden it stands up on its legs on my passenger seat—this bird came up to my shoulders and looks over at me,” he said. 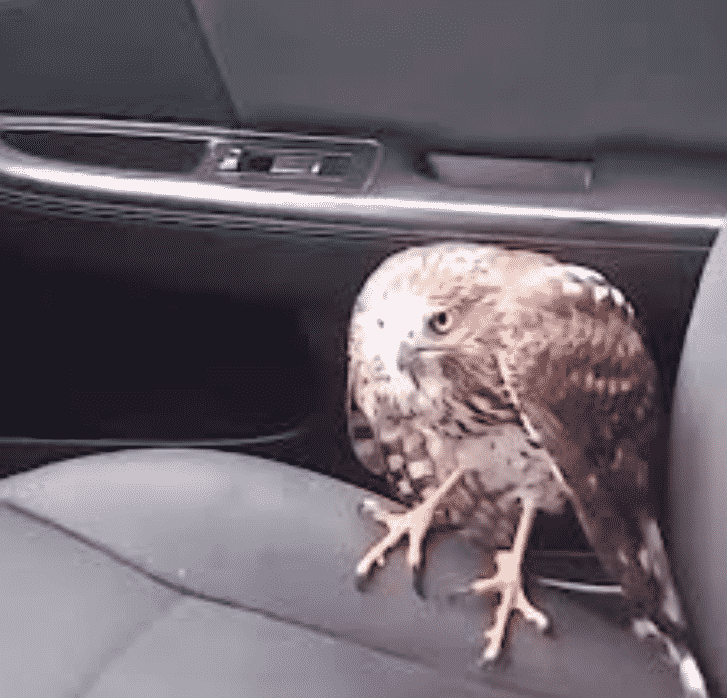 It was clear that the bird was a threat to Graveling and his car! The sharp beak and talons “looked like they could do some damage,” he said. The bird’s wings were also so big that they could easily block his view of the road. That’s when he decided that he would pull the car over. 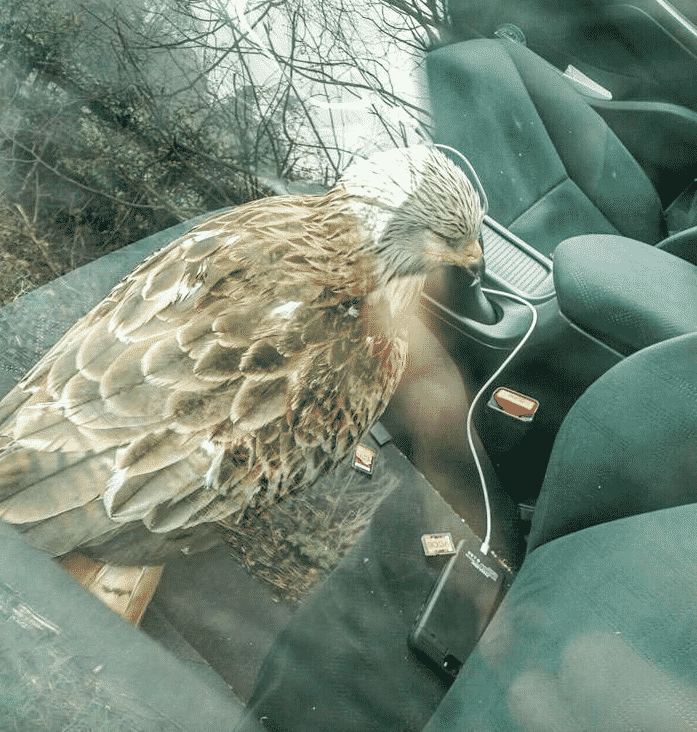 Graveling quickly made his way out of the car. He managed to escape unscathed from the wrath of the bird, however, he was stranded for the next three hours as he waited for help to arrive. That’s when he turned to Twitter to share his story as the bird lingered in his vehicle.

He began documenting the situation on his Twitter account.“3:02 – 6:29pm – Unable to get back in car,” he tweeted. The tweets surprisingly went viral. Everyone wanted to know about the “large angry bird.” 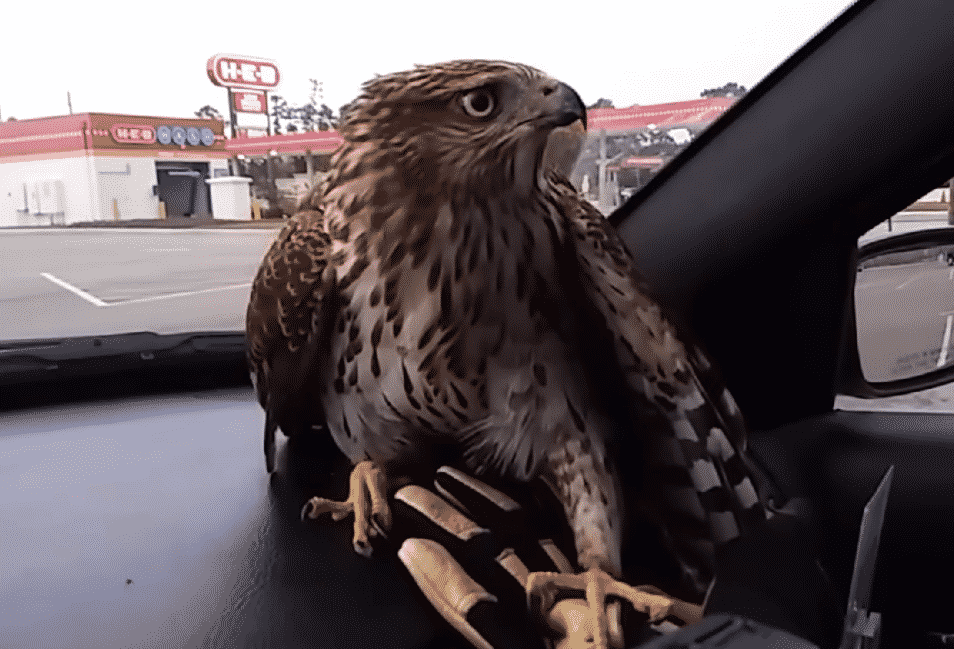 As the bird began to make Graveling’s car his own territory, the reporter knew he couldn’t handle the situation alone. That’s when he made the call for help. However, it would take a while before help would finally arrive. 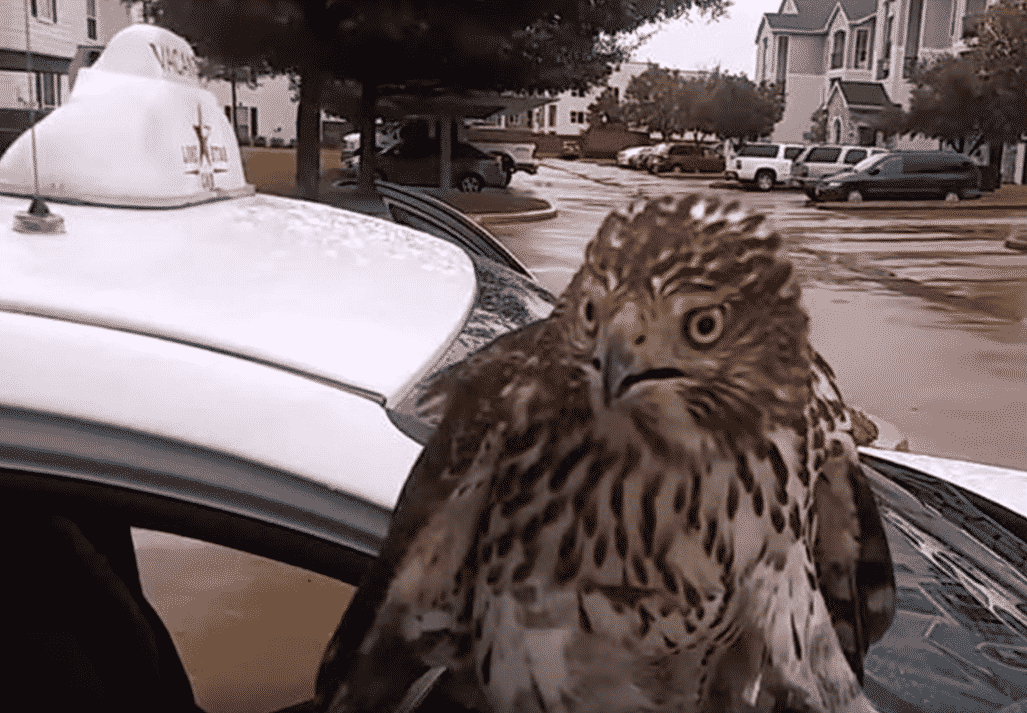 Graveling made a phone call to the RSPCA. He called them to help him out with the “angry, injured bird.” He waited for approximately three hours before rescuers arrived on the scene. 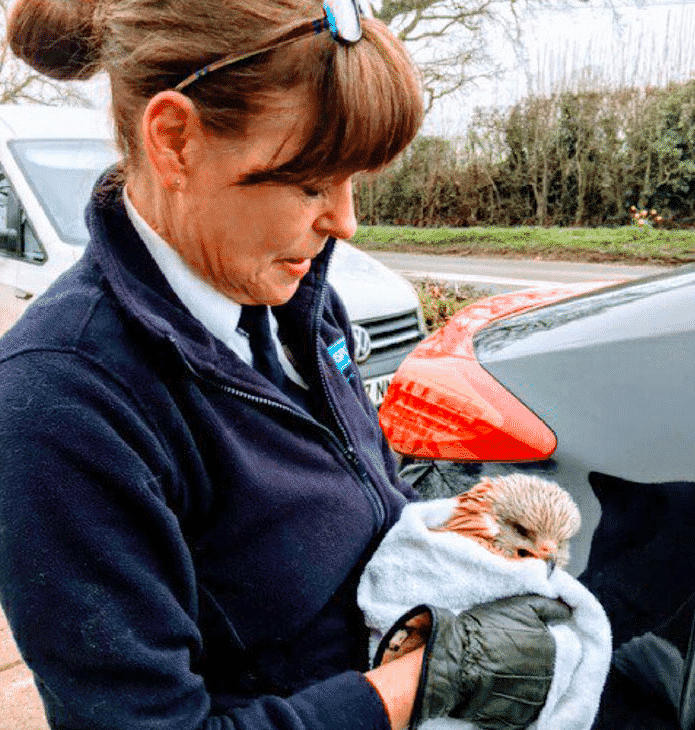 At around 6:30 pm, help finally came. The animal rescuers approached Graveling’s car and removed the bird safely from the vehicle. “Just another day,” he joked. The bird was in safe hands. 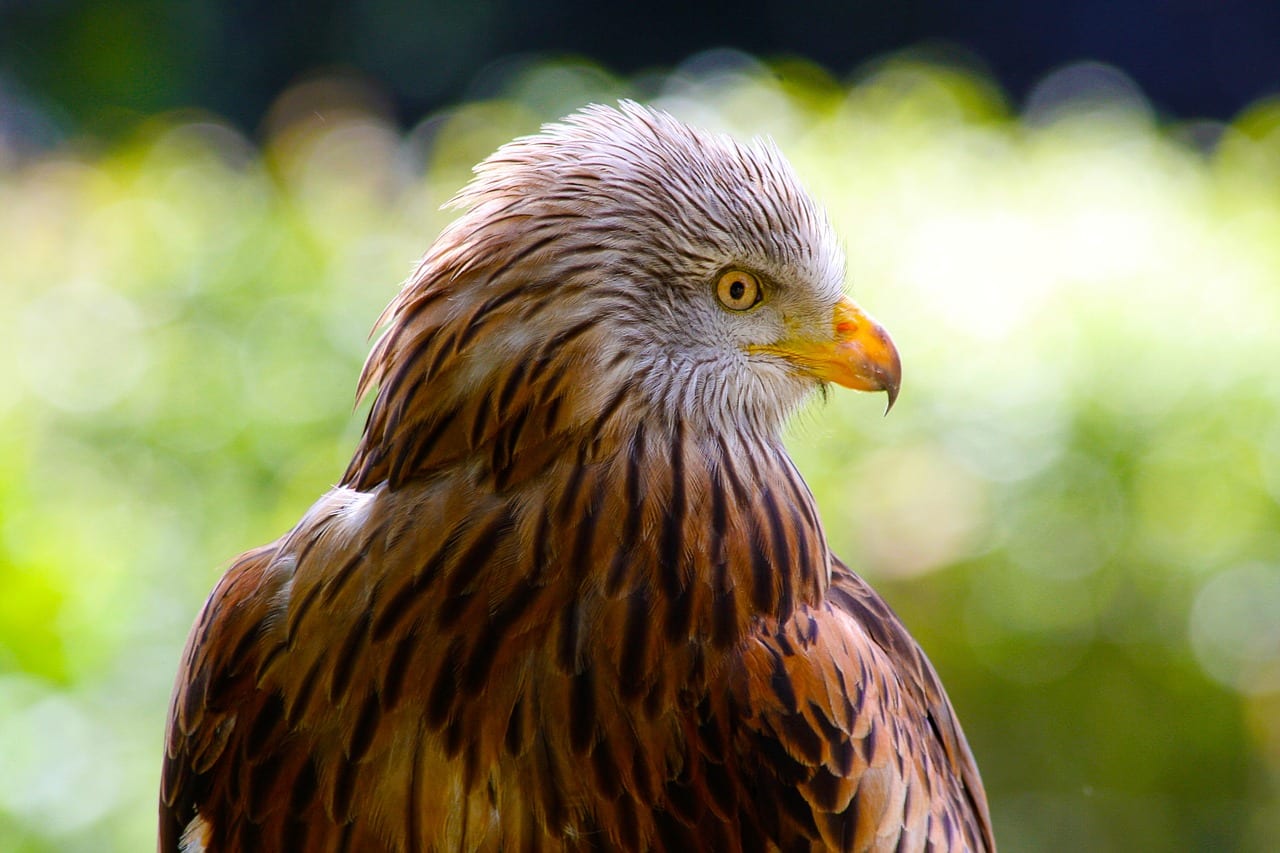 It seems that Graveling never did make it to the filming location, however, he did manage to help out an injured bird. Even if it tried to attack him when it woke up from its slumber… 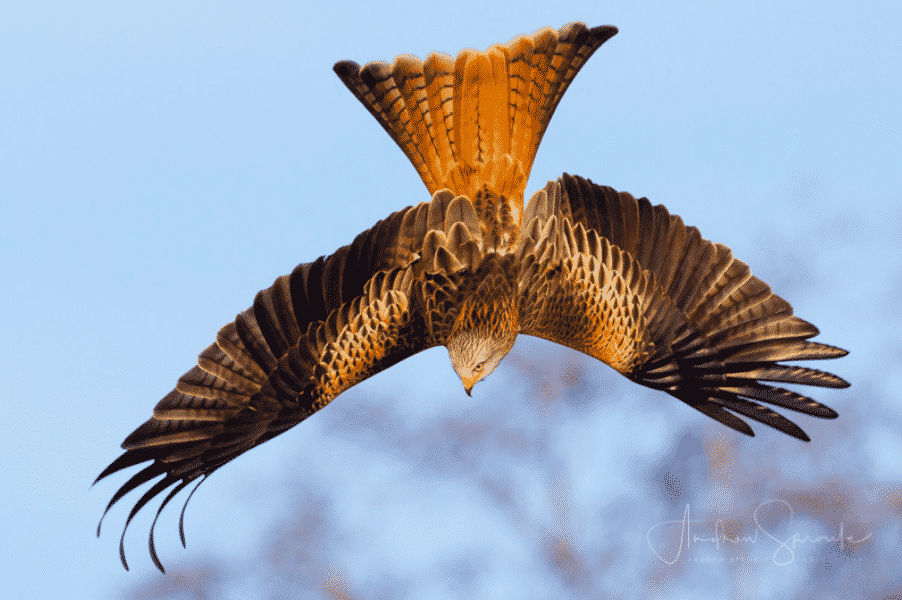 Thanks to his posts on Twitter, the bird’s species was quickly revealed. Users instantly recognized it as a red kite. Apparently, this type of bird is extremely rare! 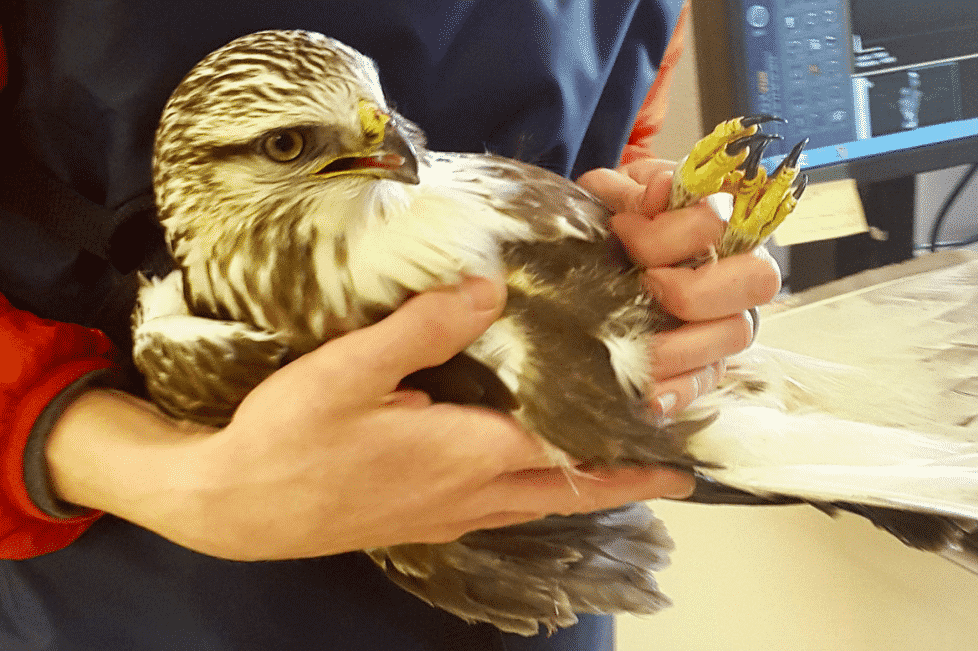 “Wow, red kites are rare!!! Like hen harriers or peregrines…. you get them in Wales, and Dumfries and Galloway, in south East Scotland….!!! Absolutely beautiful hawks!!!,” one user commented on the Twitter thread started by Graveling. 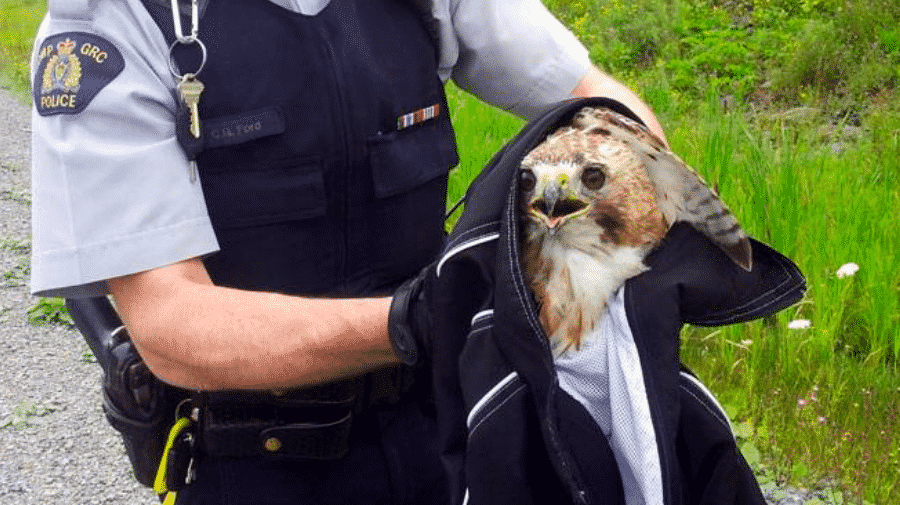 Once the bird was rescued, Graveling got his car back. Unfortunately it was a “bit of a mess” afterwards, however, he didn’t mind since he was able to help rescue the bird in the process. 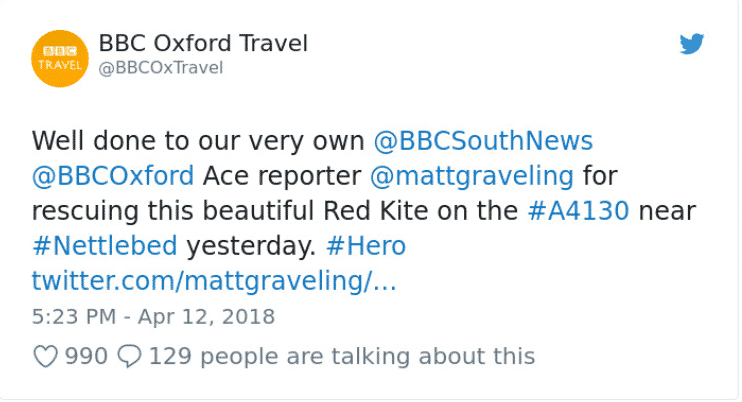 Although his noble actions may have prevented him from going to the shoot for his job, Graveling’s employer praised his actions. “Well done to our very own @BBCSouthNews @BBCOxford Ace reporter @mattgraveling for rescuing this beautiful Red Kite on the #A4130 near #Nettlebed yesterday. #Hero,” the BBC Oxford Travel account tweeted. 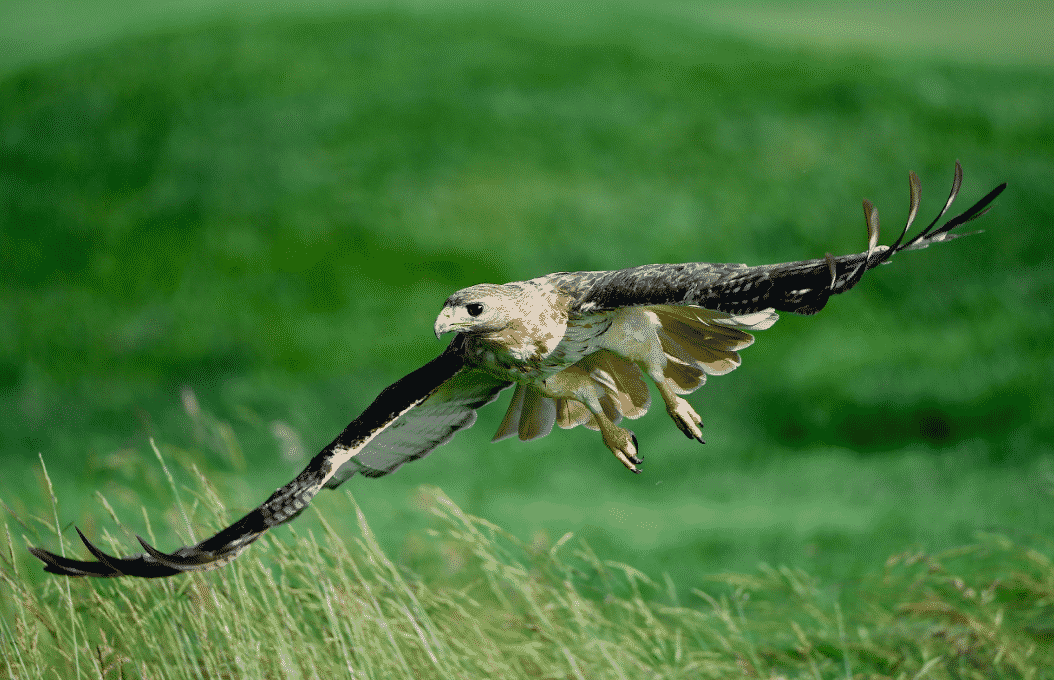 Although things didn’t turn out the way he expected them to, Graveling doesn’t regret his decision to help out the injured bird. Now Graveling can get back to work with a clear conscious knowing that somewhere out there the bird is flying once again.