We live in a world where technology helps people carry on with their lives, no matter what. For example, when a person loses a limb, they replace it with prosthetics. And if we can help humans be whole again, why not help animals too? This is exactly what an orthopedist surgeon thought as he saw the greatest challenge of them all: creating prosthetics for elephants.

It all started when he heard Mosha and Motala’s story. They were only baby elephants when they walked on a landmine. Fortunately, their lives were saved, but they both lost one leg…

20. Walking Near the Border 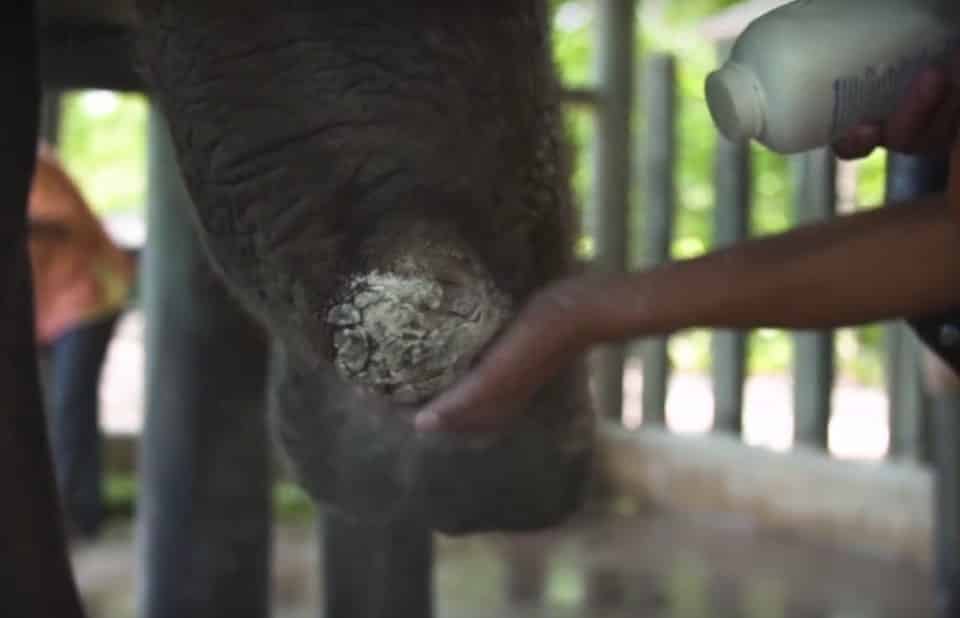 Mosha’s sad story began with a regular walk that led her and Motala to the Burmese border, which was filled with old landmines. She was only seven months old when she was injured. Rescuers helped them… and then the most amazing thing happened.

Her right front leg was severely injured, and the vets had to amputate it under the knee. But she wouldn’t stay in the wild, as the Friends of the Asian Elephant Hospital took her and Motala in and made them permanent residents.

The problem with losing a leg for such a big and young animal is that she would grow abnormally and her weight would be too straining for her spine. Something had to be done quickly…

17. The First Elephant to Receive a Prosthetic Leg 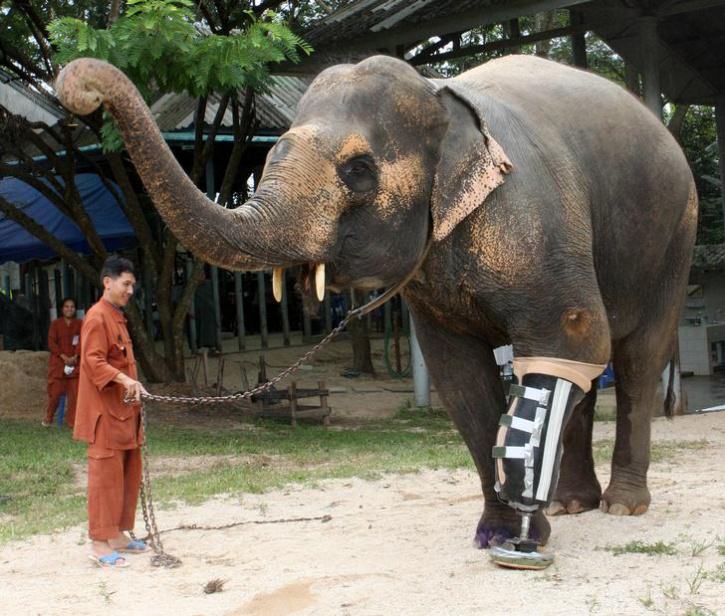 Donations, sponsors, and devoted people led to the creation of a solution for Mosha and Motala to walk again. They would be the first elephants to receive a prosthetic leg that they could use to walk around on their own! 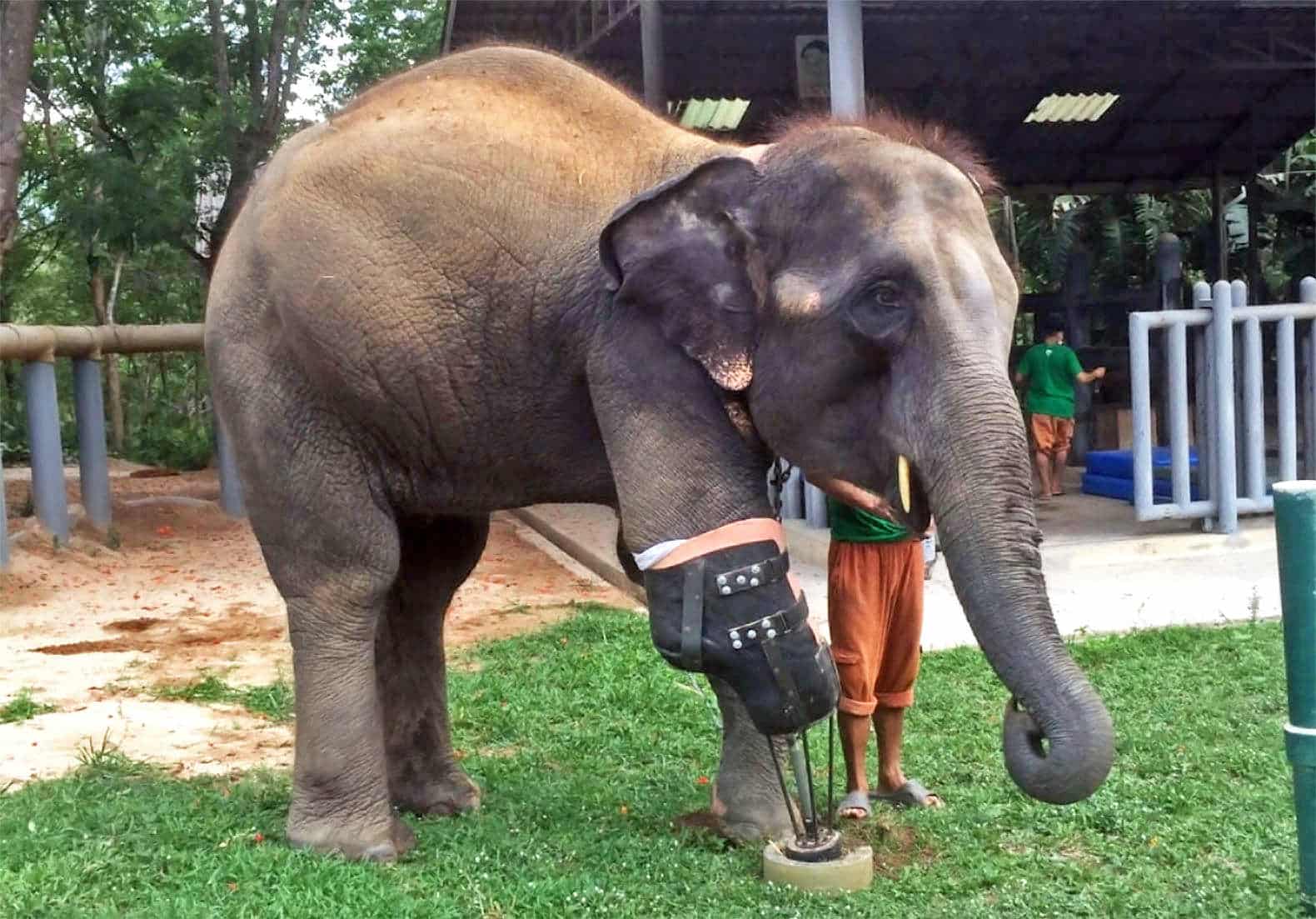 The first prosthetic legs for Mosha was created by Dr. Therdchai Jivacate who is an orthopedist surgeon. He couldn’t just carry on without finding a way to save the poor animal’s life. This is what he said…

15. Designing and Creating the Leg 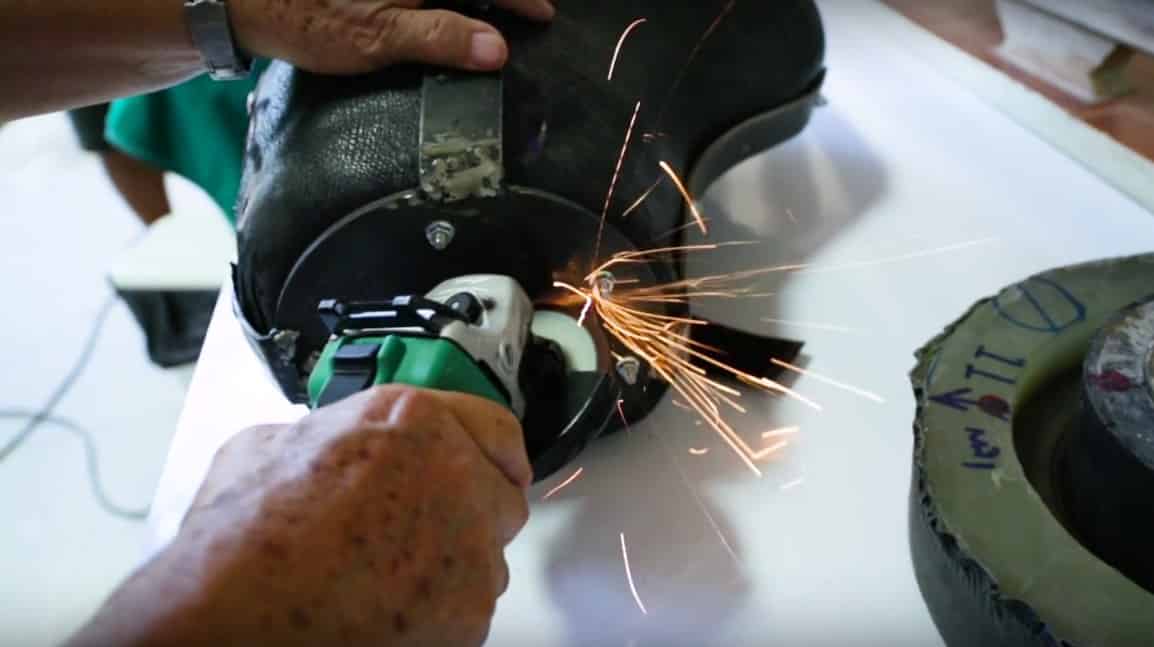 It took a lot of time for Dr. Jivicate to design and build a prosthetic leg that would also be functional for the huge mammal. The first prototype was finished eight years ago, being the first device of its kind!

14. It Was Essential for Mosha’s Survival 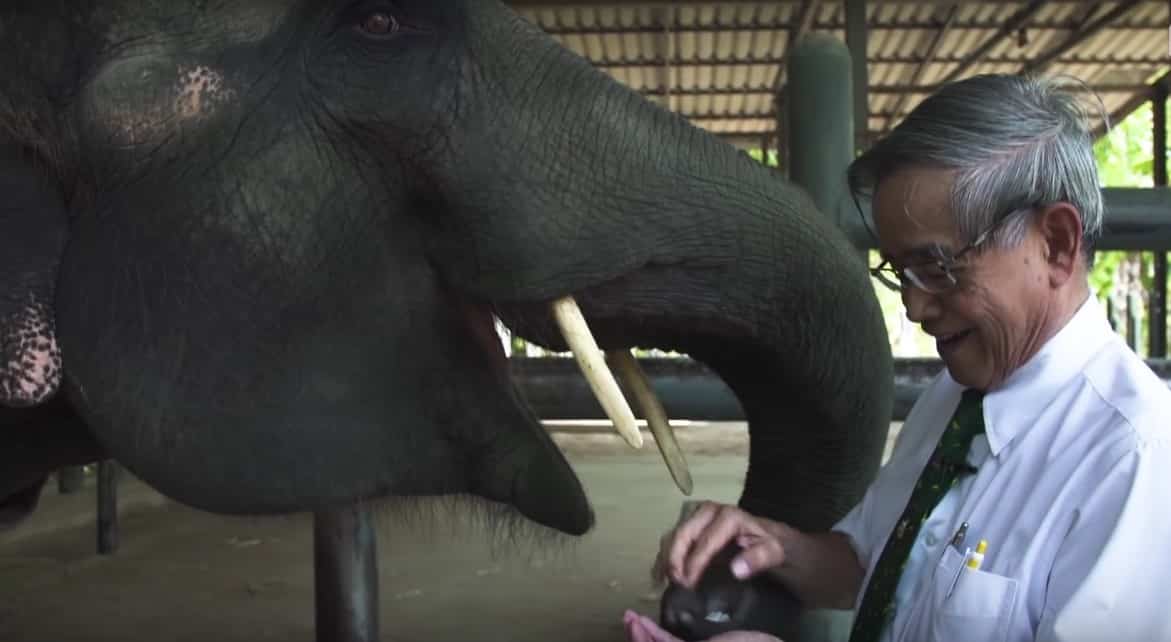 The doctor explained why his work was vital for this elephant: ‘The way she walked was unbalanced and her spine was going to bend. She would have died.’ This motivated him to create the first prosthetic limb for an elephant.

13. The Large Scale Posed a Challenge 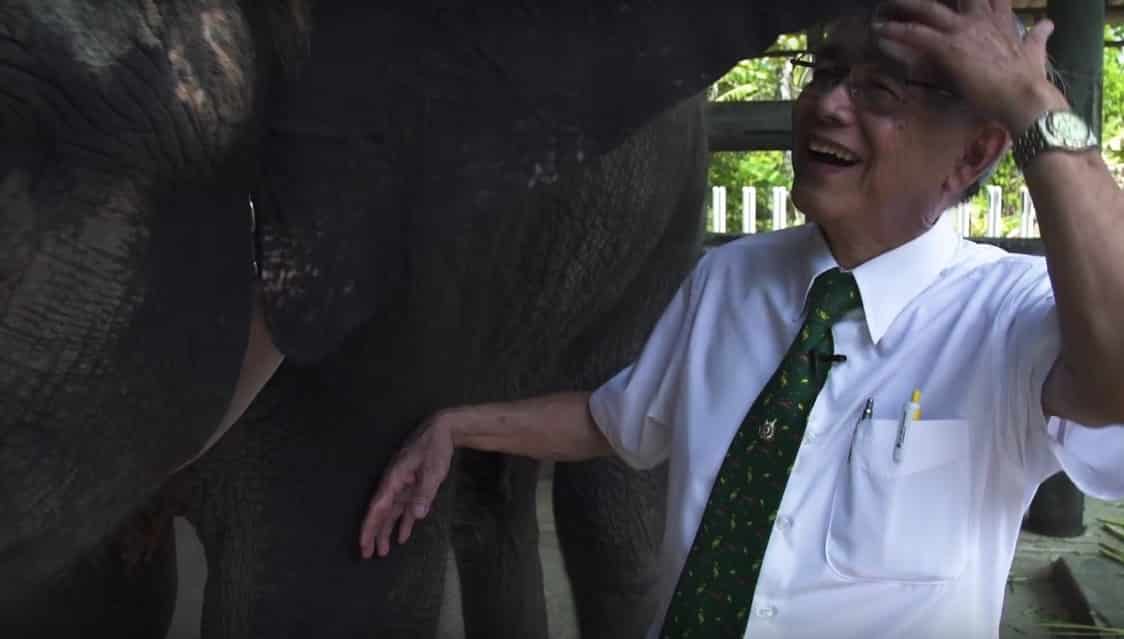 The doctor faced many challenges, as the size of the prosthetic leg posed many difficulties. He had to make a comfortable socket for Mosha’s stump and it also had to properly align with the foot so that Mosha could walk on it.

12. The Team Behind Mosha’s New Leg 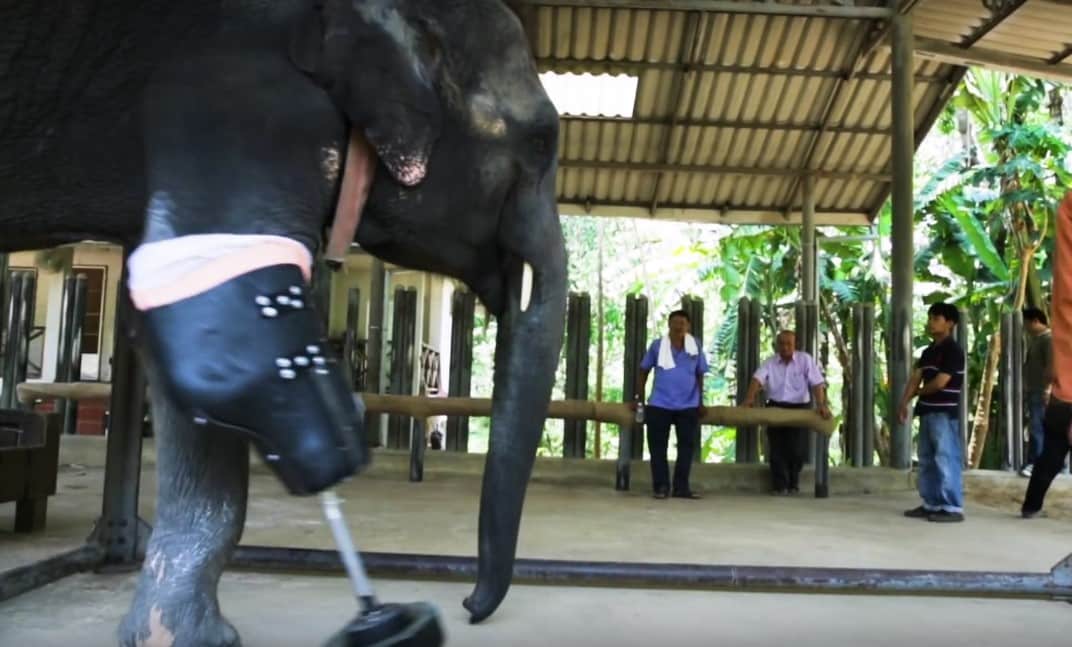 You won’t imagine how many people struggled to build Mosha a leg: Jivacate had his own team and the vets at the Friends of the Asian Elephant hospital also supported him. And they finally built the first prosthetic leg! 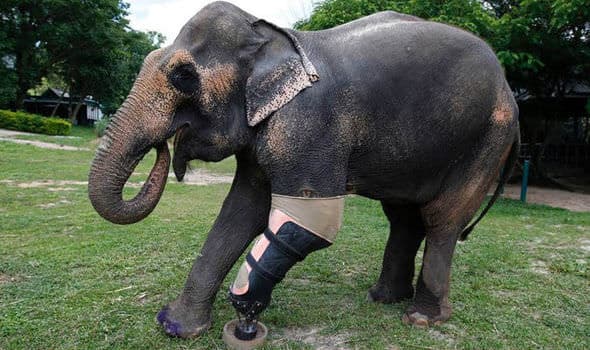 Given the fact that it was the first prosthetic of such a great size, Jivacate could only create one through trial and error until they succeeded in building one that functioned well. You won’t believe how heavy it was! 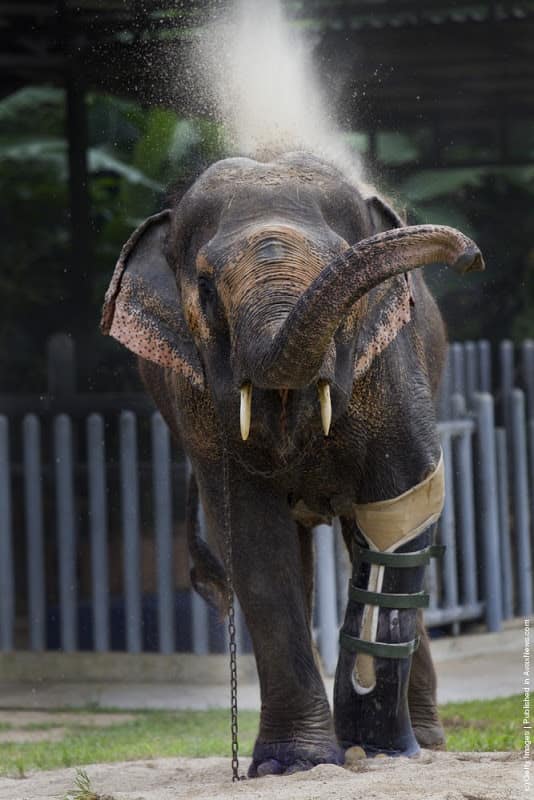 The new leg weighed 15 kilograms (almost 33 pounds), and it was made from thermoplastic, steel, and elastomer. Then Jivacate remembers how Mosha reacted when she was fitted with the new leg… 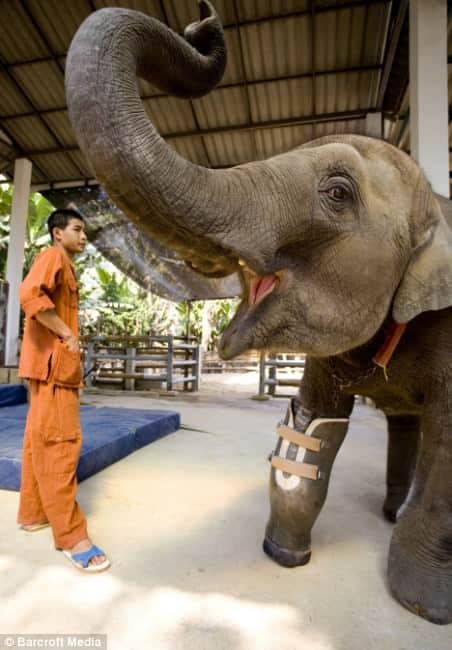 What we failed to mention before is how funny Mosha is! Jivacate said that ‘she was curious about what was attached to her stump and tried to remove the prosthetic with her trunk, but we’d secured it tightly.’

8. She Finally Accepted It 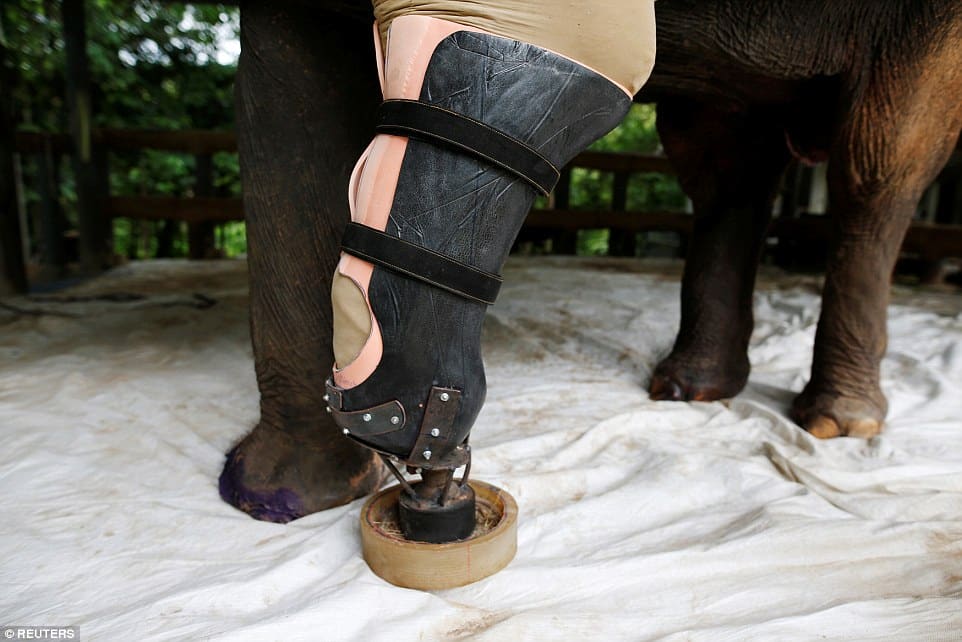 Jivacate knew his job just began, seeing that the elephant wasn’t in pain while using the prosthetic leg to walk. She took 12 hours to learn to walk with it, but once she got used to it, she was unstoppable! Then, Motola received her prosthetic leg too!

7. The Work Was Not Over 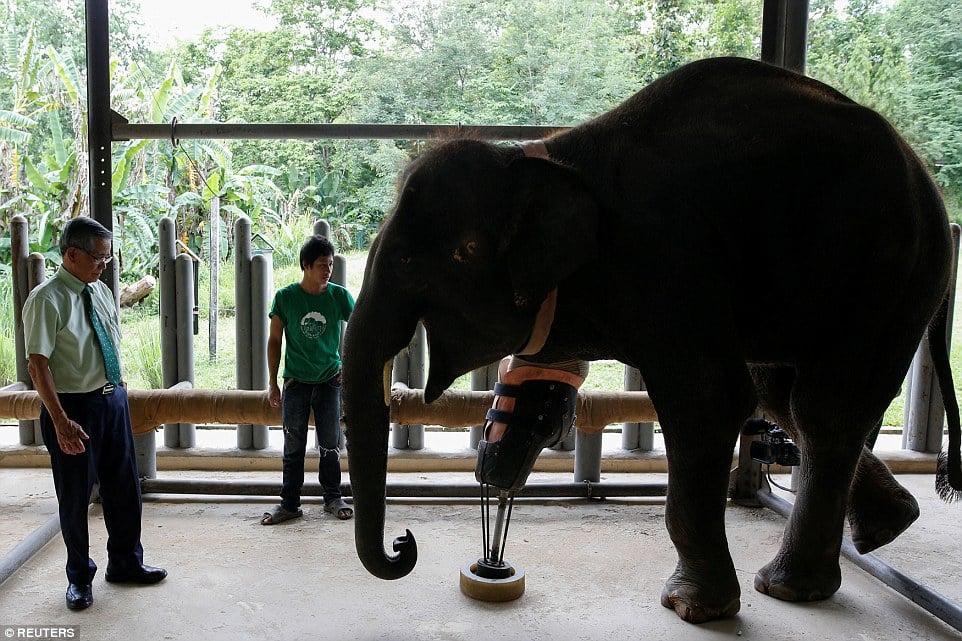 6. Waiting For a New Prosthetic 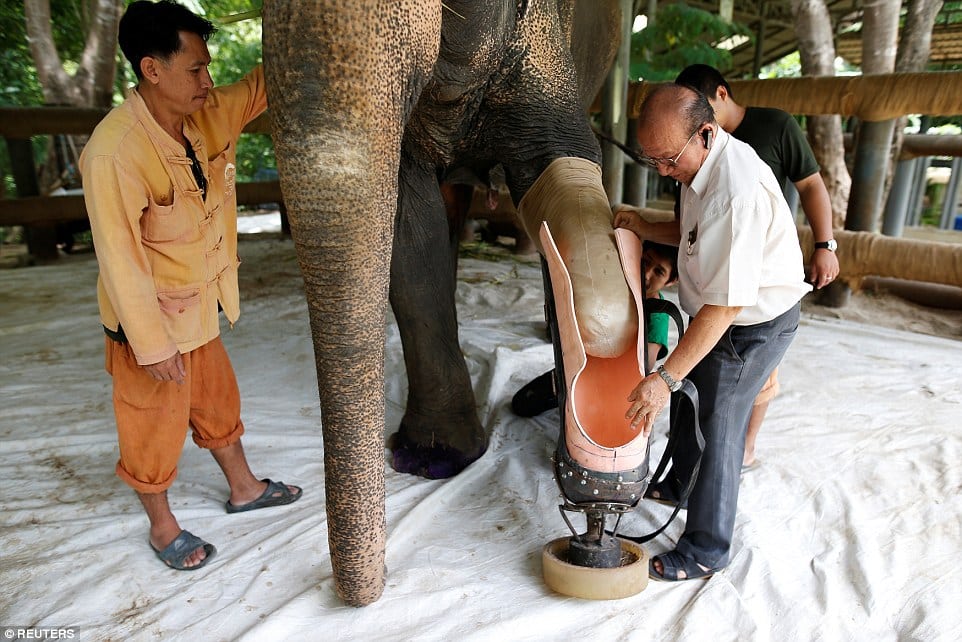 Mosha was accustomed to having a different leg. While she had to wait for a new one, she would lean against the pen or rest her front legs by climbing on some bars. It was like looking at a person resting their arms on a table! 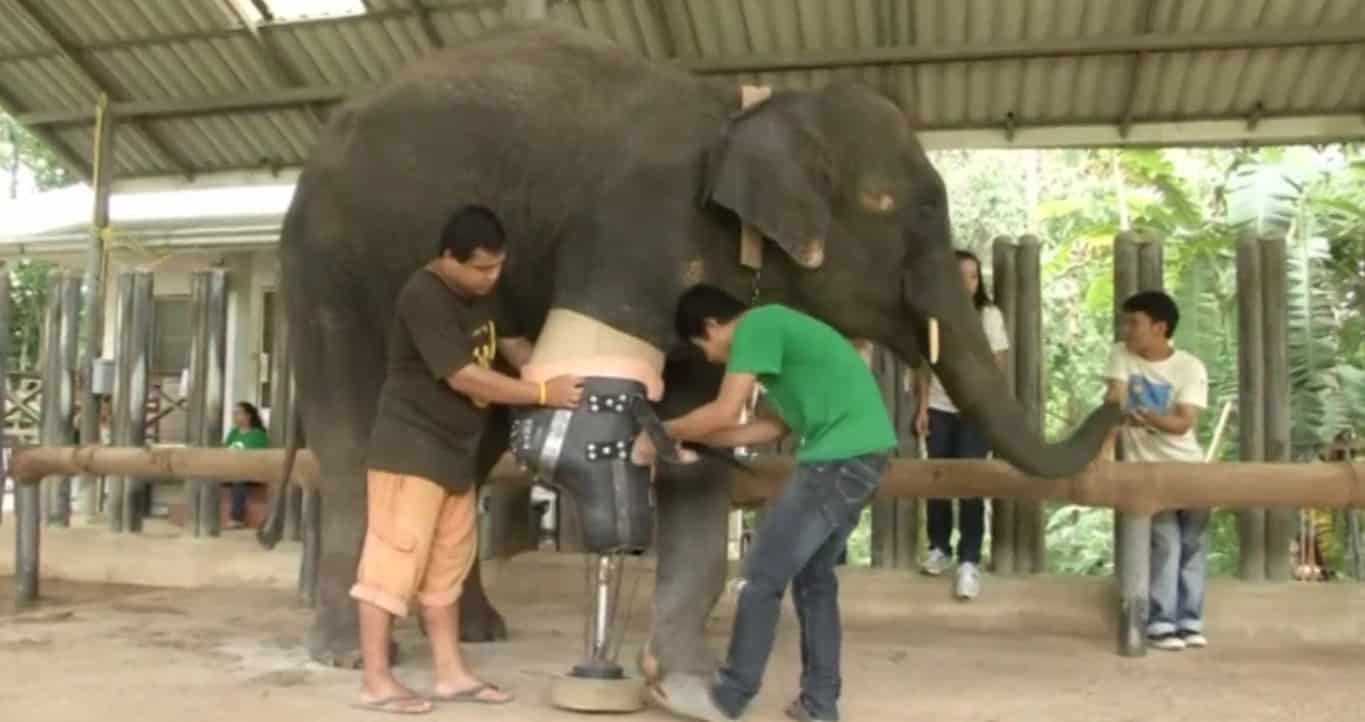 The Friends of the Asian Elephant Hospital has a prosthesis factory that has helped Mosha for over eight years with new prosthetic legs as she grew old. She might not be very comfortable with the leg, but she can walk… 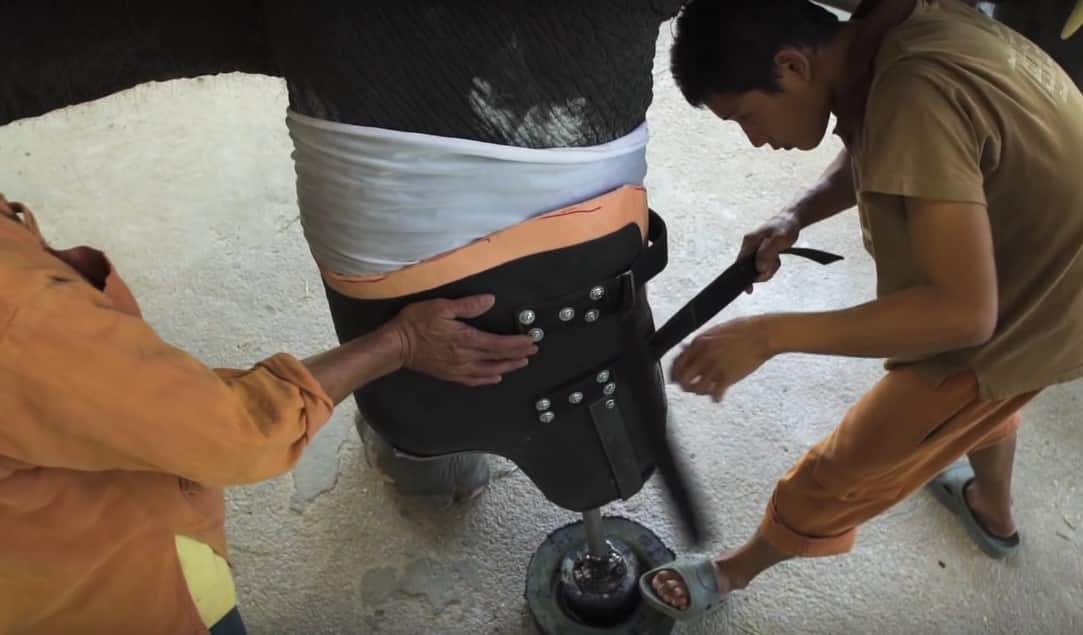 Jivacate created nine prosthetics for Mosha while she grew in size. He said that his job was to give Mosha a leg, even though ‘animals don’t ask that we make legs for them.’ And Mosha is forever grateful!

3. She Knows He’s There to Help 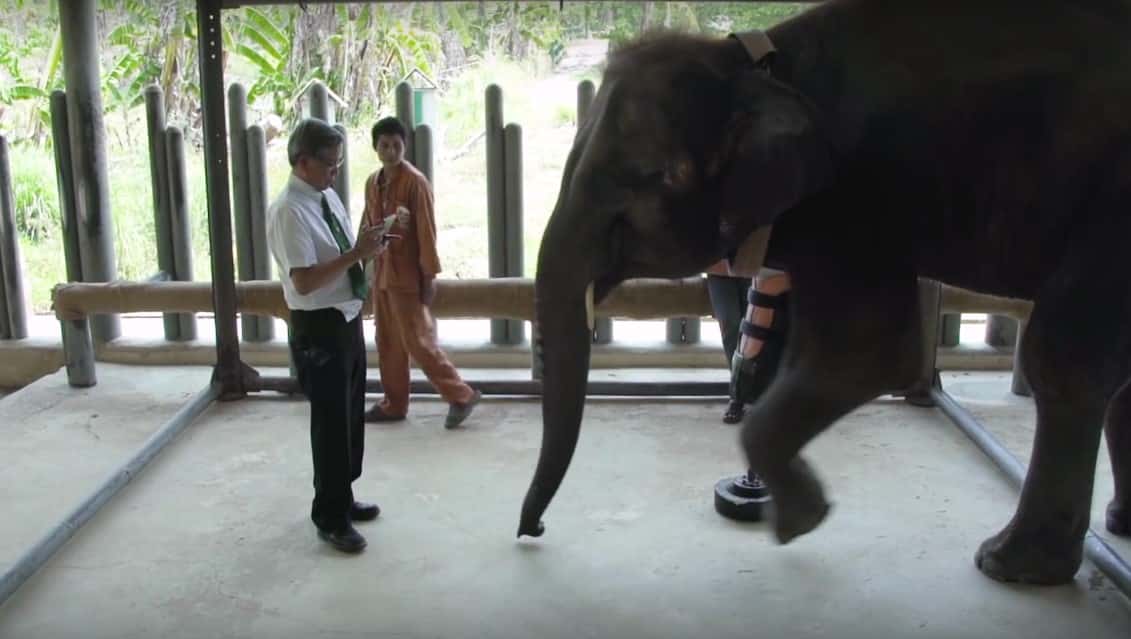 ‘I think she knows that I make her prosthetic legs as each time I come to the elephant hospital she makes a little salute by raising her trunk in the air,’ said Dr. Jivacate. 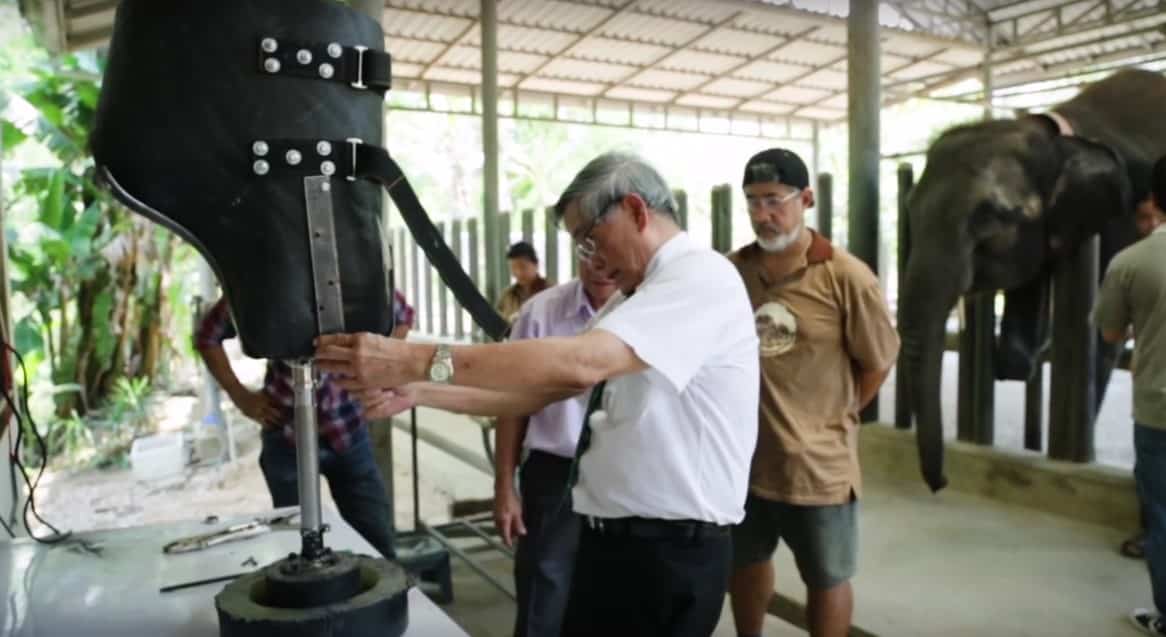 It’s so great to see that Mosha has received the special help she needed to survive. Looking at how happy she is, we know this amazing elephant will never forget her friends.

1. Friends of the Asian Elephant Foundation 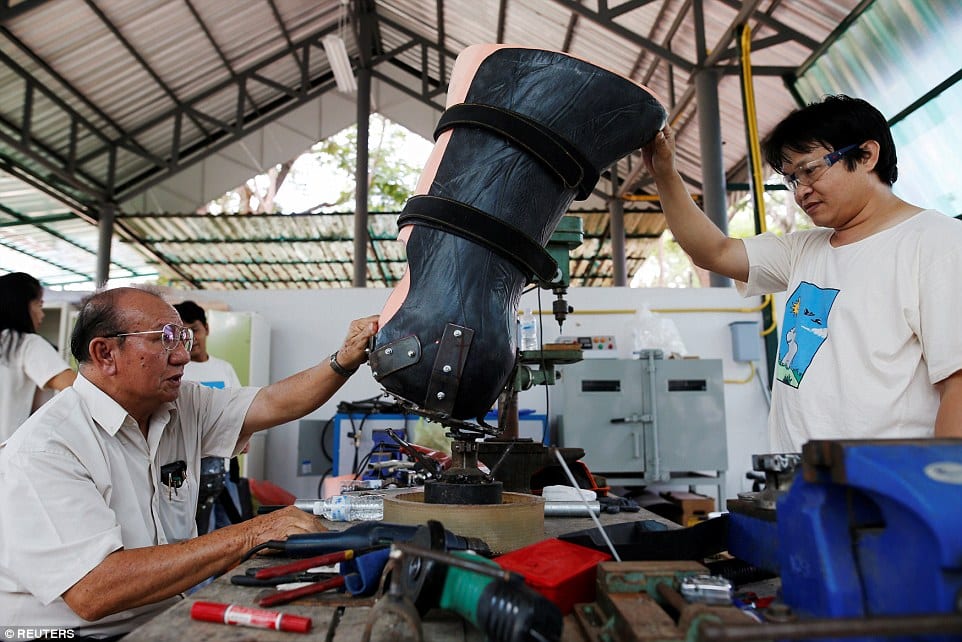 Thanks to the foundation, Mosha and Motola have a place to recover and live in harmony! Dr. Jivacate and his team’s work has been vital for the wellbeing of these two elephants and for others that may need such prosthetics.