When a Los Angeles resident went out for a walk one day, he stumbled upon a cute kitten. He couldn’t just walk past it without stroking it and giving it some cuddles. But then, the kitty reacted in the most surprising way.

The man, Connor Manning, was feeling a bit down, as he went through a breakup. But this kitty was there by his side, showing him that she loves the cuddles. Little did he know that he would end up seeing her again… 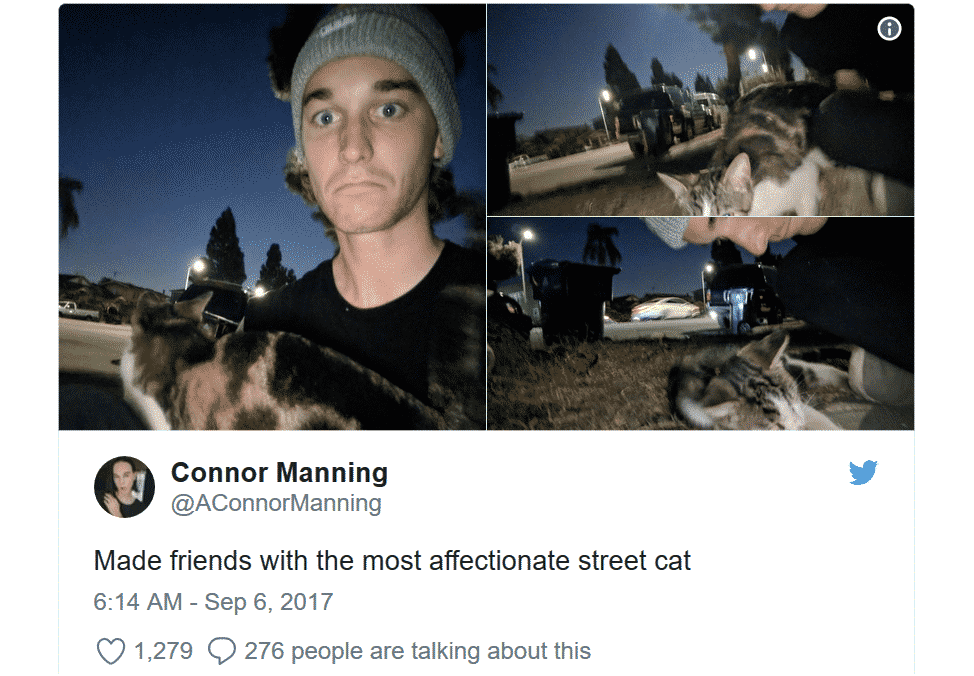 Manning never thought that on the night he felt blue, a tiny kitten will show him the path to happiness. Wait until you read the whole story – you’ll need a few napkins by the end of it! 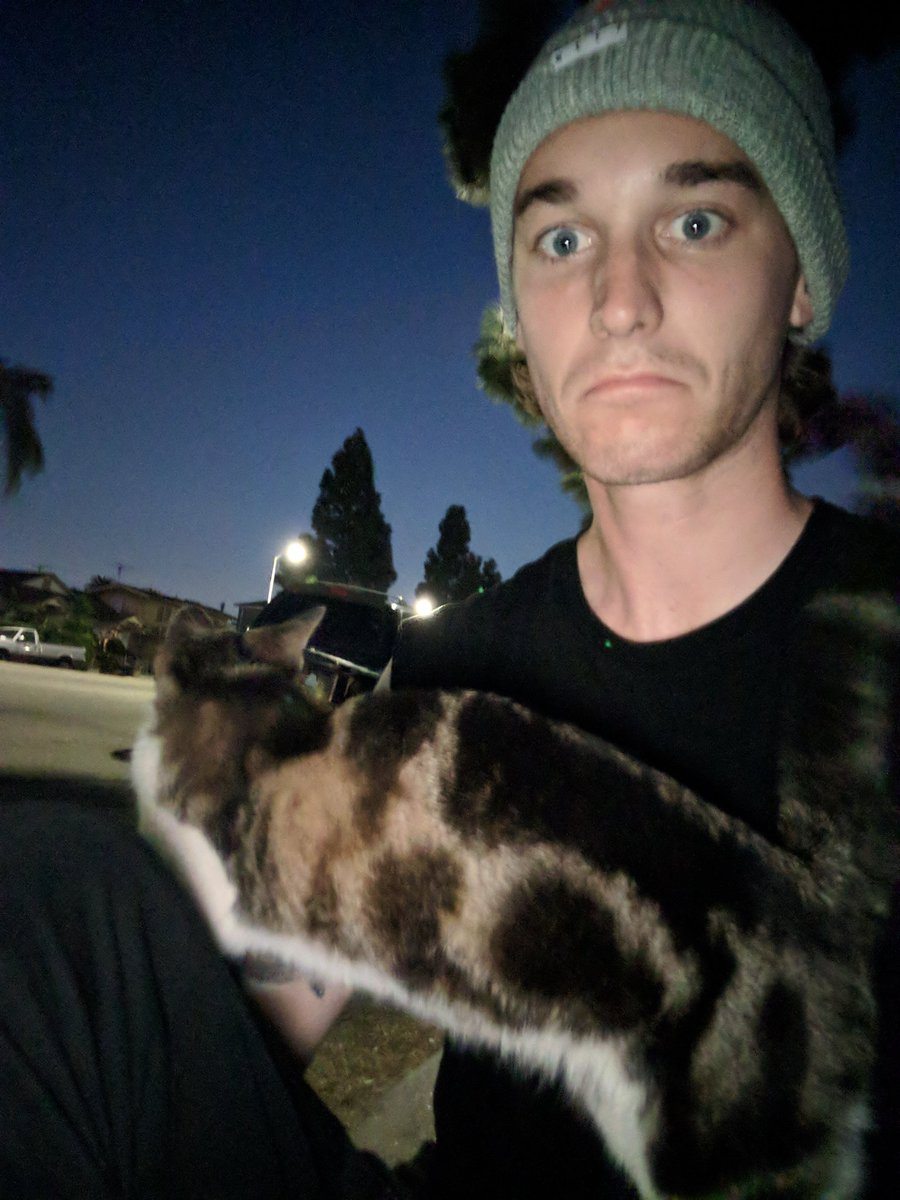 On his way home, as Manning met the kitty, he started to document his encounter on Twitter. The kitty started following him on his journey and meowed at him to stop. His live-updates warmed the hearts of millions of people.

18. The Kitten Followed Him Home

In his first Tweet, Manning showed the world his new friend. He played with the kitty for a while, and to his surprise, it started following him home. The kitty wasn’t looking too great. It was skinny, a bit dirty, and had a lot of fleas… Wait until you see her name!

No matter how skinny this kitten was, she found the power of will to follow her new best friend. When he first bent to say hi, the kitty just jumped in his lap and claimed him as her human. We’d say it was meant to be!

16. They Spent a Few Hours on The Porch

‘After about five minutes, I started getting up to head home, and she was SUPER scared,’ Manning said. And when he crouched down, the kitty ran over to him, and then they did this ‘for about four blocks until we were on my porch.’ And then, something amazing happened!

15. Feeding and Caring For the Stray

Why bother trying to tell the cat to stop following him? Manning just let the cat come inside the house, as he went to the kitchen to get her some water and food. She took a little tour of the house, but preferred to stay outside…

He gave her the food and water and then hang out with her outside. Looking at her cute white paws, he already found the kitty a fitting name: Socks. But Manning had to meet a friend, so he said goodbye to Socks, who remained on the porch. But when he got back home…

Manning hoped that Socks would be there when he would come back. He left her a little blanket there, just in case it decided to take a nap. And then, after a couple of hours later, he returned home. You won’t believe what happened later!

The man came back home, and Socks was not on the porch anymore. He was a bit sad, but at least he knew that Socks ate a bit and drank some water. He hoped the kitty would be safe, but he didn’t think this would happen…

Then, an hour after getting back home, Manning says ‘I heard the tiniest meows from my door, and she came back, and I nearly died it was so cute.’ This next reply to Manning’s live updates on Twitter guessed where the kitty was gone. 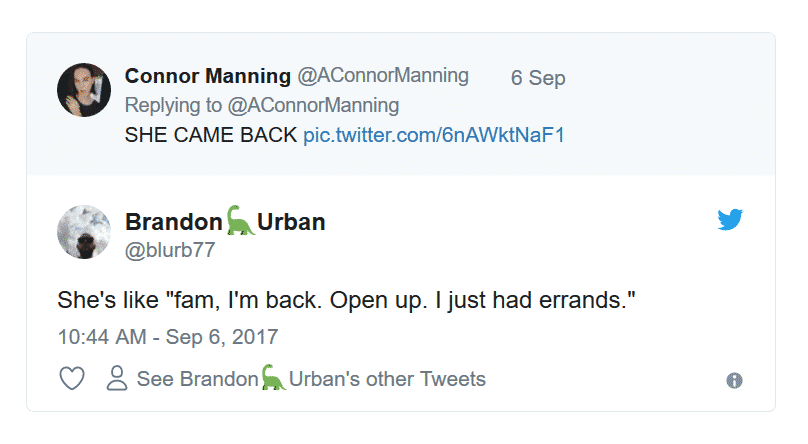 Yeah, probably the cat just had to do some chores… Manning took her inside the house, and the next day, he went to the vet and see if the kitty had a microchip. He found out that she wasn’t chipped, and that she was only six months old…

If Socks didn’t have a home, Manning thought he’d provide one. Socks was a bit nervous inside the house, but she really liked spending time with Manning. She then refused to go outside the house!

8. But There Was a Problem…

Socks settled into Manning’s house and looked quite pleased to have a shelter, food and tons of cuddles. But as Socks was getting used to living with Manning, there was an issue that he had to solve…

7. Manning Was Allergic to Cats

The man was very happy to keep Socks, but he was ‘super allergic to cats.’ He said that he had a cat when he was little, and his family had to get rid of it because of his allergy. Then, he thought of this…

6. Searching for a Different House

‘Driving home from our first vet trip, my throat started to close up, so at that point for my own safety I decided I’d give her to someone else,’ said Manning. So he began searching for a proper family, and he found someone at work.

A co-worker agreed to take the kitty. However, Manning decided to try allergy medicine, hoping it would work. And the great news was that it worked! ‘I was in love,’ said Manning. He took medicine and felt better. ‘So, she was home!’ added the happy cat owner.

4. Socks Was Going to Stay With Manning

It was official! Socks is now Manning’s furry baby. It’s been over eight months, and these best friends can’t stop cuddling all day long. Socks has an Instagram page of her own, where her human dad posts all her adventures in photos and videos!

You can find the famous kitty on Instagram: aladynamedsocks. The description of her account is so sweet; we’re melting: ‘Socks Desiree Manning: I’m just a little kitty who grew up on the street. I adopted my human @aconnormanning on 9/5/17.’

2. Socks Is Now a ‘Pounce Machine’

Manning is so happy to see how great Socks looks like a housecat: ‘Watching her go from a bone-thin lethargic baby covered in fleas into this little pounce machine has been so rewarding.’

1. A Happy Cat With a Loving Owner

‘She’s a little sweetie, loves meeting new people and [is] full of energy,’ added Manning. This kitty is living the life, surrounded by tons of love and toys. She even goes on walks on a leash! Manning is the greatest cat dad ever!