Baby Deer Refuses To Leave Her Rescuer’s Side

When this baby deer first laid eyes on the man that saved her life, she knew she could never part ways with him. This outdoorsman captured his rescue story on camera and it was absolutely amazing! 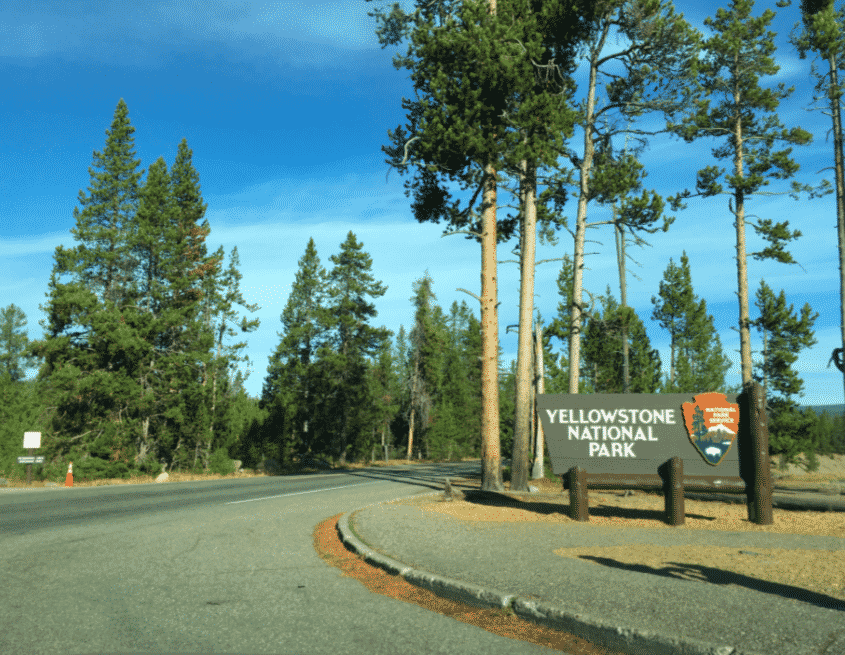 Lithuanian outdoorsman, Darius Sasnauskas, was hanging out in his backyard that is very close to Yellowstone National Park in the US. While he was out there, he noticed something amazing happening. He couldn’t believe his eyes… 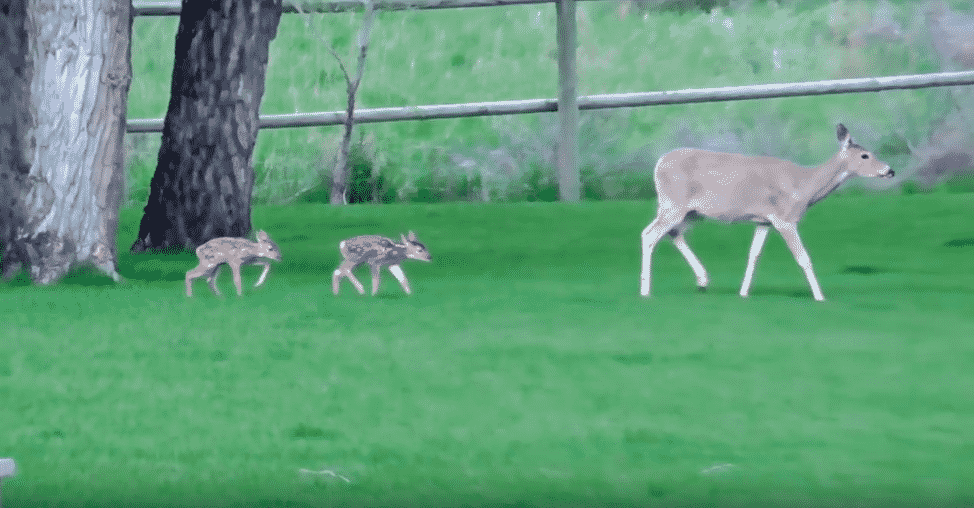 There in his backyard was a pregnant female deer and she was getting ready to give birth. Darius was able to witness the miracle of birth right in his own backyard. He was excited about the opportunity. 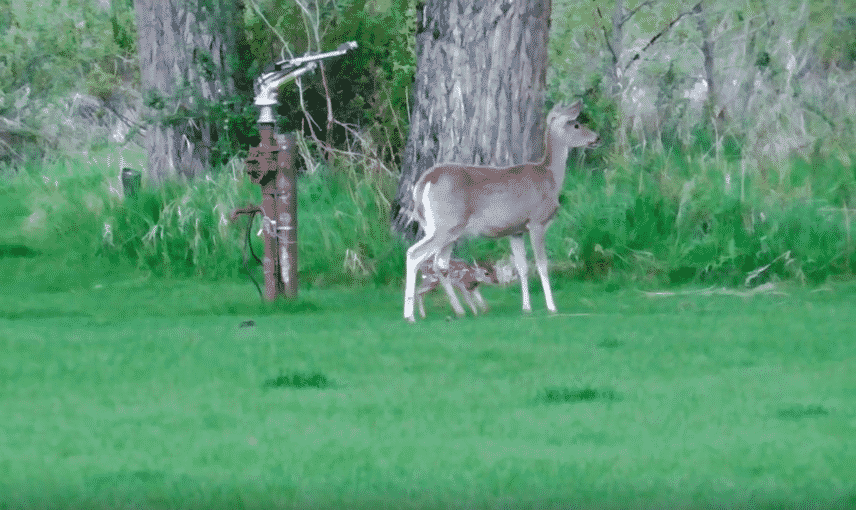 Darius had brought out his camera and was filming the situation as it occurred. That’s when he noticed something incredibly heartbreaking. One of the fawn was injured… 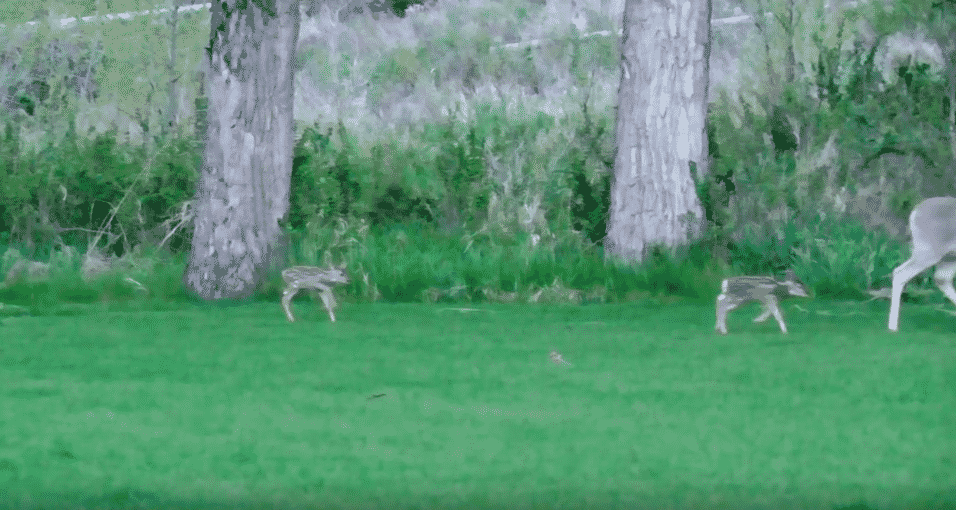 One of the fawn was lagging behind due to an injured front leg. “The fawn was helpless,” Darius told The Dodo. “She was just born earlier that day, [and] still had some blood on her belly.” 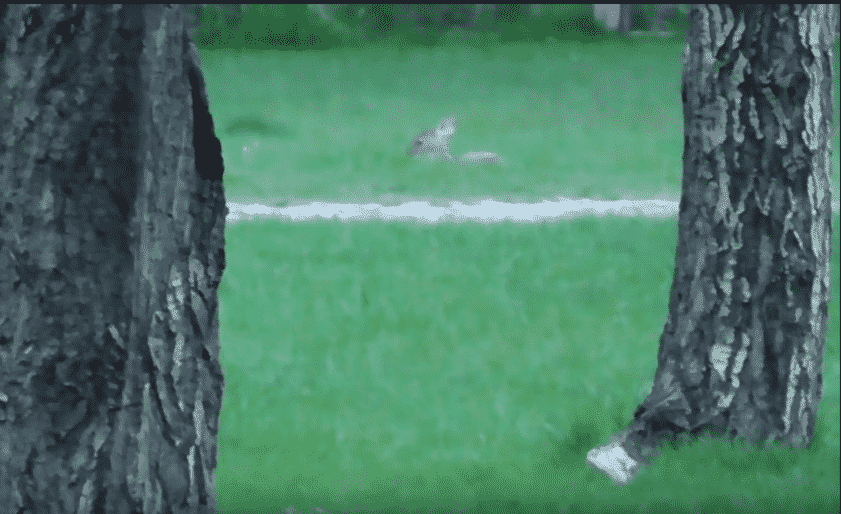 The fawn continued to struggle to keep up with its family. Eventually, he just couldn’t keep up and was left behind by his mother. “I do not support keeping wild animals as a pets,” Darius wrote in the caption of his video. “But this was [a] special situation.” 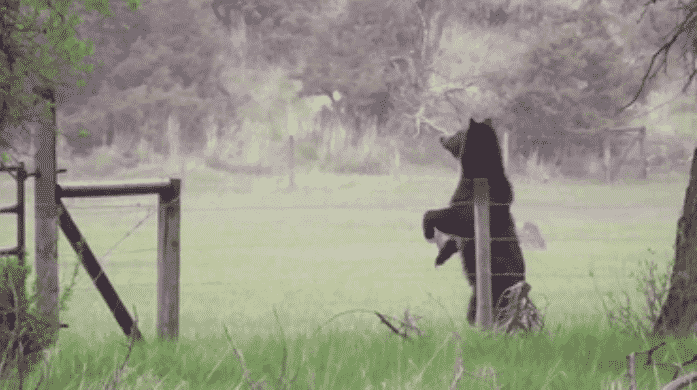 “With so many predators around, she had no chance to survive on her own,” Darius wrote. So Darius decided to step in and help out. He quickly brought the fawn into his home. 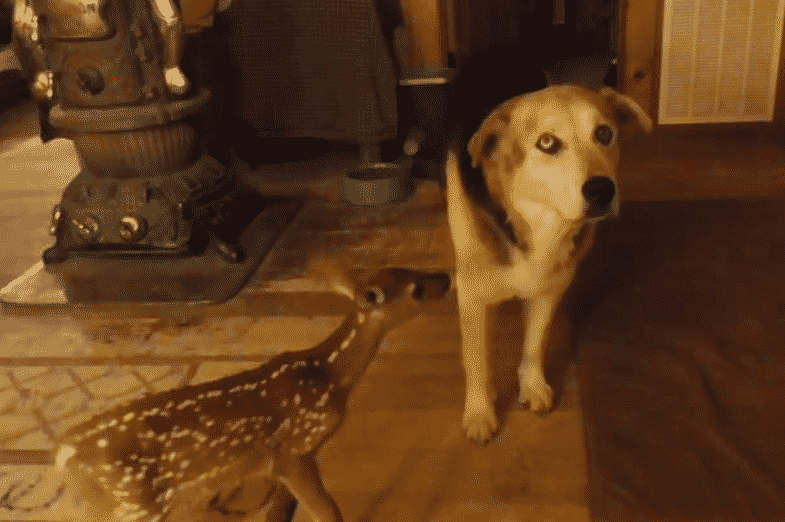 “She was very hungry and had no problem with any of my pets. [For the] first week, she slept by my bed on my shirt, and the shirt became very important to her,” Darius told The Dodo. “She had to have it to be able to sleep.” 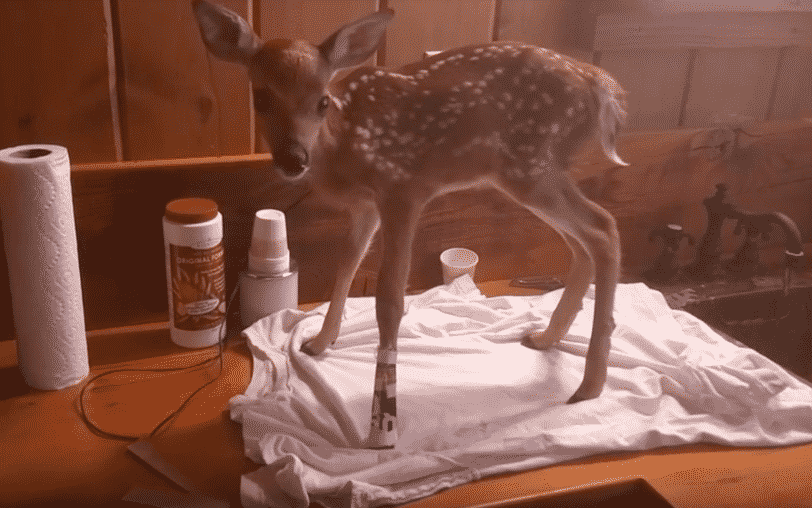 Since it was her leg that was giving her trouble, Darius came up with a perfect solution. He quickly put together a splint from an oatmeal box. This would help keep the fawn’s leg in place. 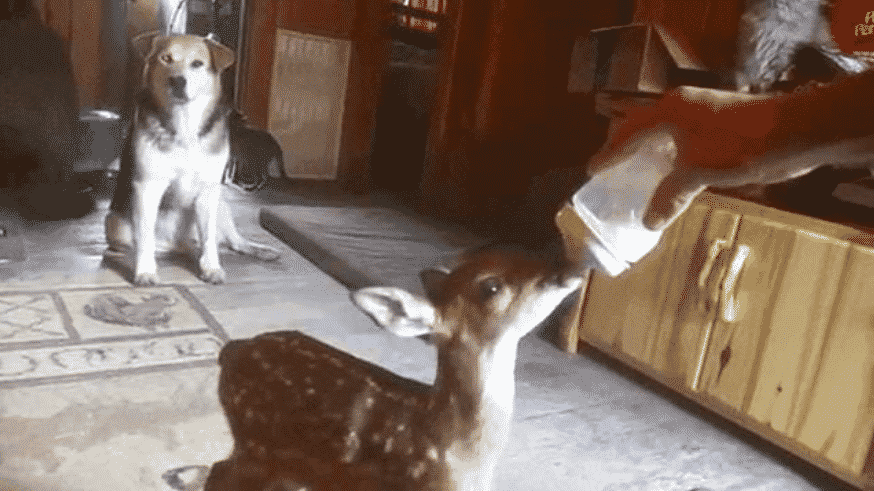 Darius also took the time out to feed the little fawn every four hours. “I had to do some Internet search and reading to be able to understand how to [raise] a fawn … get up at night to feed her every four hours, and clean her after,” Darius said. 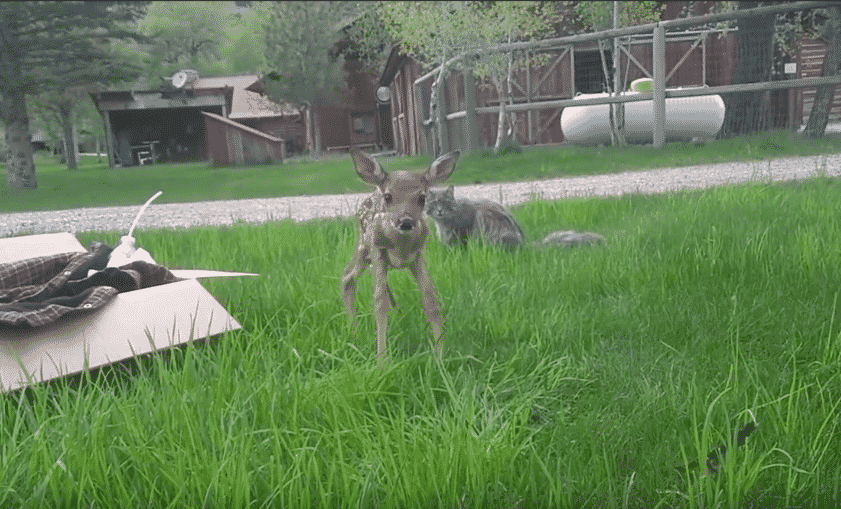 Soon enough, the little fawn began to learn how to walk on her own. This helped boost her confidence a lot and soon she was happier than ever. She even began to share a very close bond with Mack, Darius’s 1-year-old [Bernese] mountain dog. 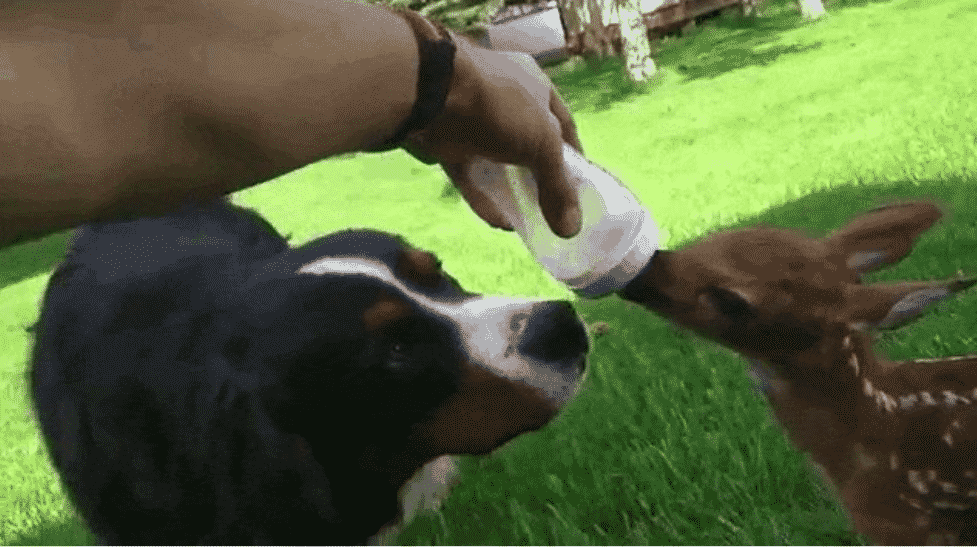 Mack was especially helpful during the beginning. “Mack was [a] big help” Darius said, “because he just loved her and cleaned her so good.” Mack kept a close eye on her. 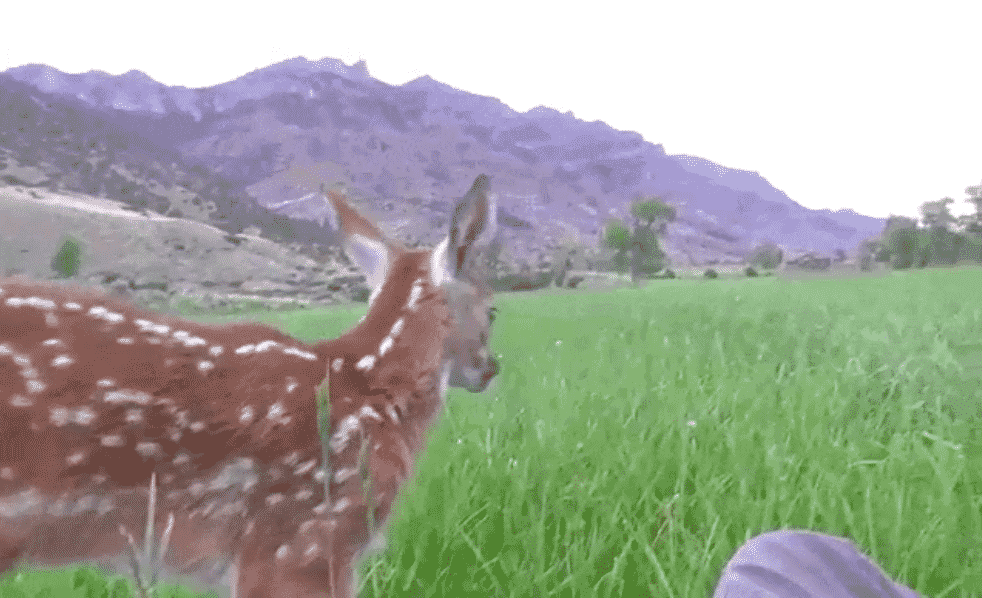 Eventually, as enough time passed, the fawn was able to walk without any problems. Darius was so happy for her and knew that it was finally time to set her free in the woods. So he had everything planned out. 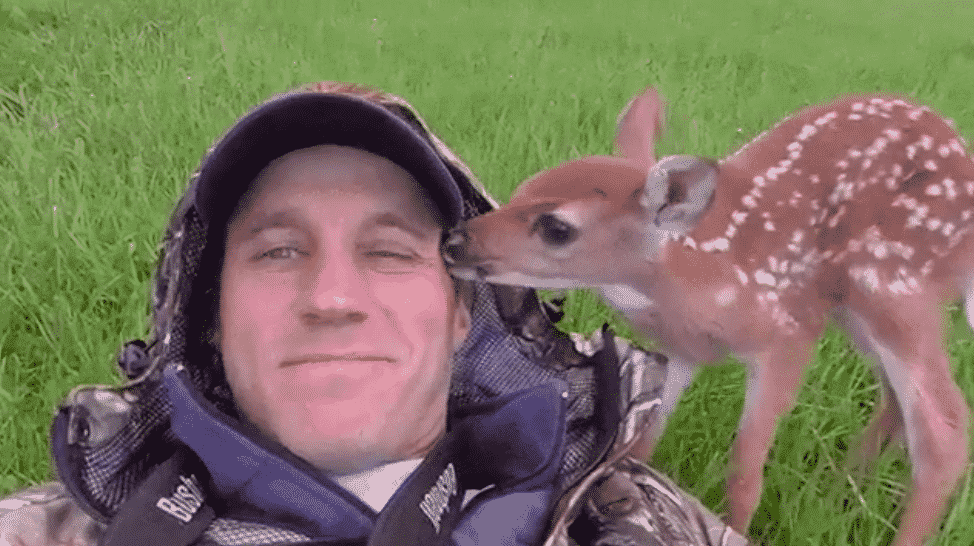 “She’s already used to me, and she follows me…but nobody can replace her real mom.” So Darius set the fawn out into the woods and let her go free. However, she didn’t seem to want to leave. 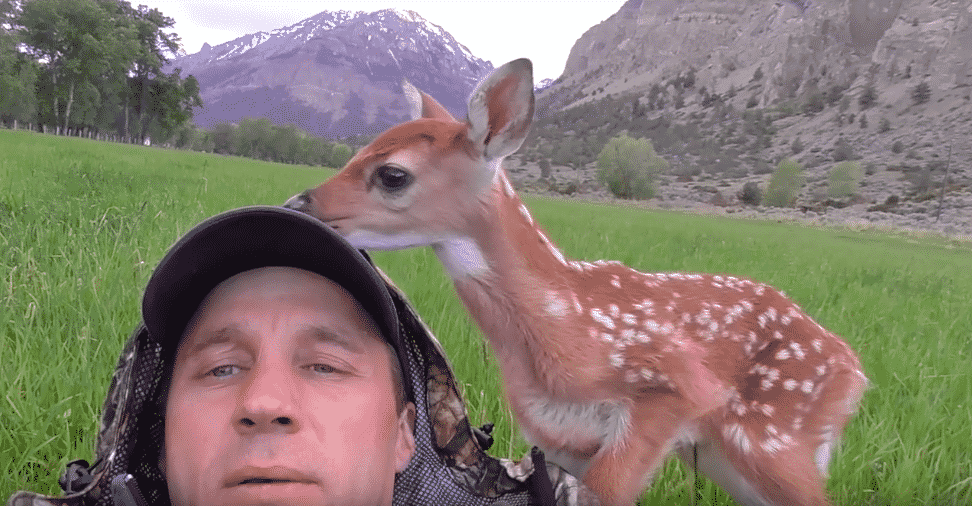 However, every time Darius would set the fawn free she would always make her way back to him. This continued to happen day after day. Until one night, something different happened. 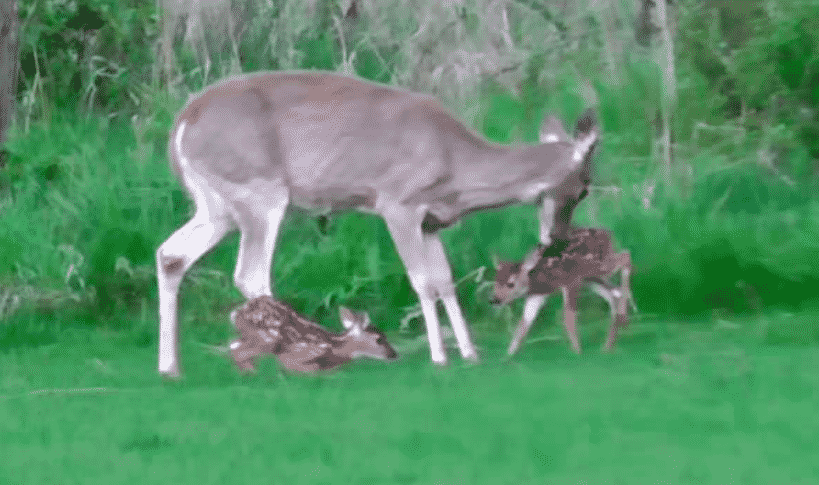 Finally, one evening the deer spotted her mother. She quickly ran off to join the family once again. Darius was incredibly happy about the way things turned out for the sweet fawn. 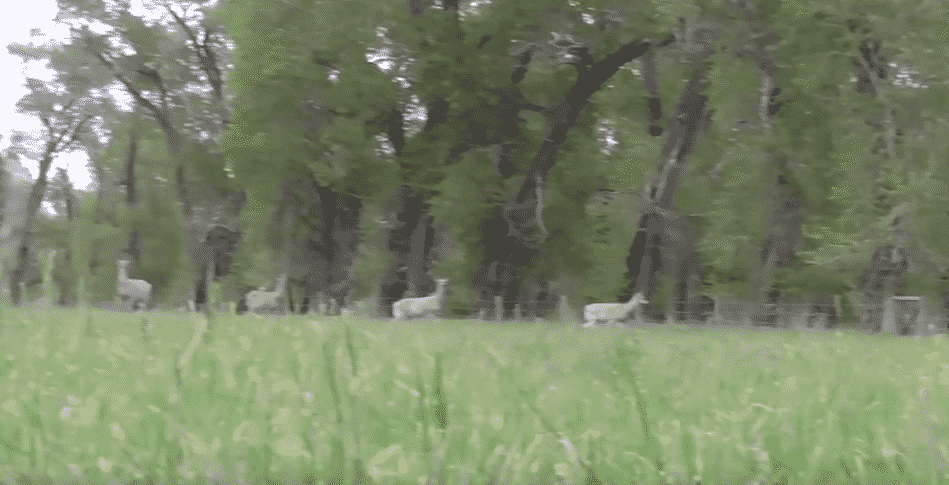 “Since day one I was hoping to release baby deer back to the wild,” Darius said. Finally, Darius was relieved of his duty to the fawn and was happy about the role he played in her life. However, he hoped that she had not grown overly attached to him. 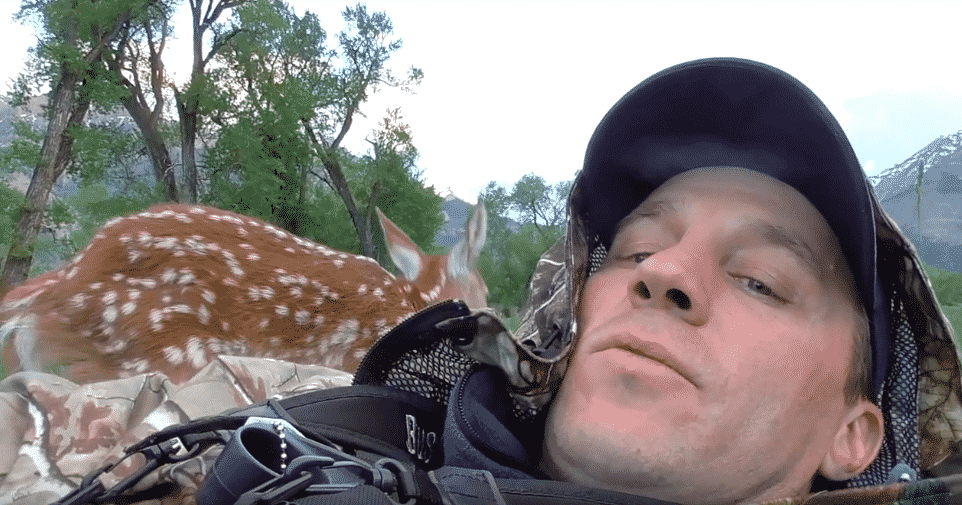 “I really hoped that she did not get attached to me too much,” he said, “because that would make [it] very hard for her to survive in the wild. She would become [an] easy target for hunters and predators.” 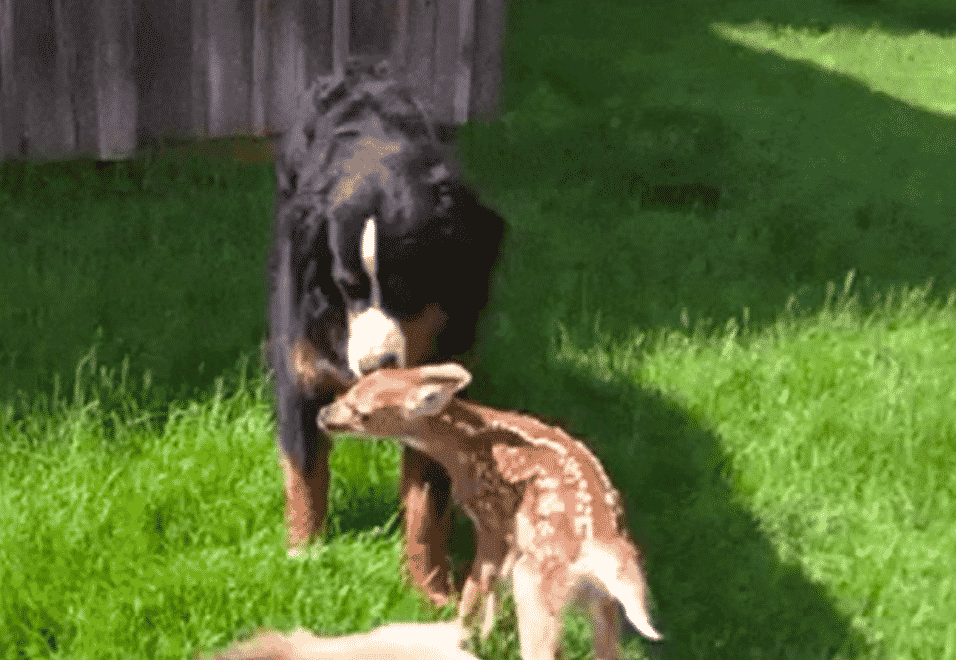 This is why Darius never went about naming the little fawn in the two weeks that she spent in his home. He didn’t want to leave her susceptible to any dangers out in the wild. So has Darius seen the fawn ever since? 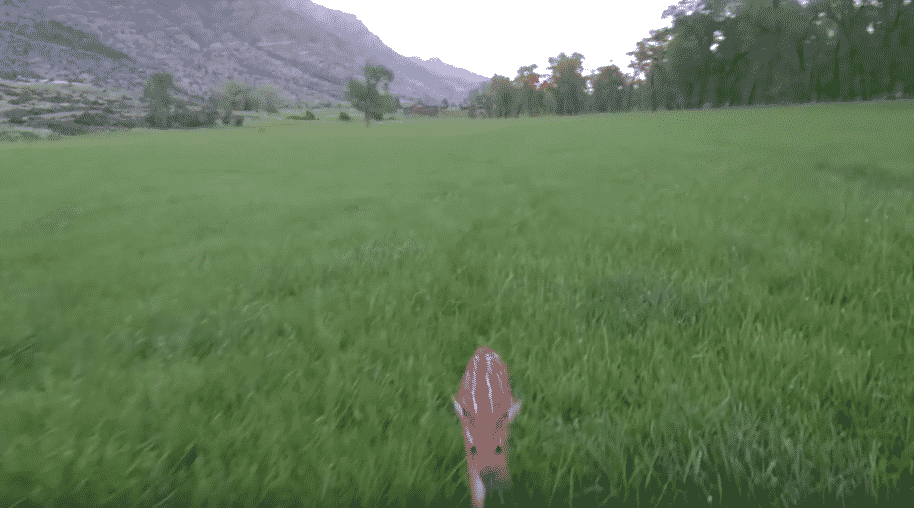 “[I’ve] seen [the family] many times after release, also seen them recently in the fall,” he said. “The mother deer usually does not go too far from the place where she feels safe, so she stays around the area.” 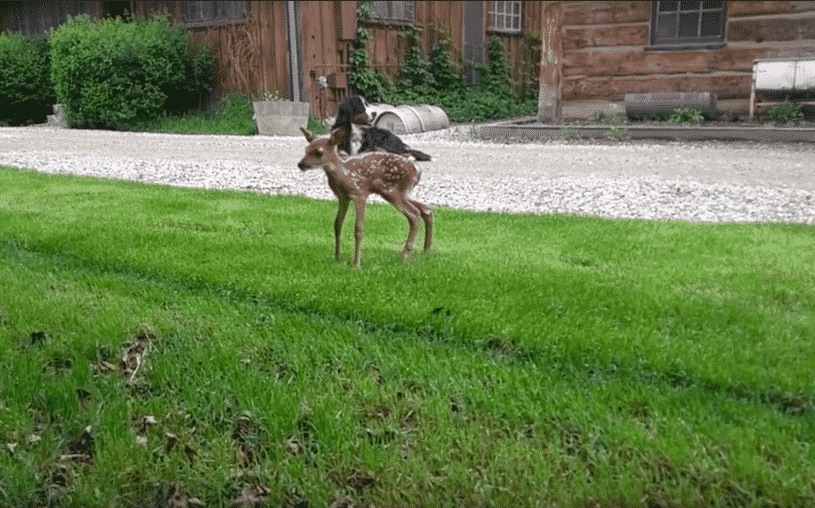 In an email to The Dodo, Darius concluded by writing, “It is [a] very, very good feeling seeing them safe roaming around.” It’s amazing to know that thanks to Darius this little fawn was able to live a full and enjoyable life!