You don’t hear about it every day: a giant tortoise and a baby hippo are best friends. Unfortunately, this pair met in the toughest moments, but becoming best friends helped them thrive. The baby hippo wouldn’t have stood a chance without the tortoise who became like an adoptive mother.

One day, in 2004, a tsunami in southeast Asia made many victims among both humans and animals. Owen the baby hippo was quite tiny when he was swept down from a river and into the Indian Ocean and again to the shore.

Fortunately, the wildlife rangers rescued the hippo, and this is how the beautiful story of Owen and Mzee began…

When wildlife rescuers found the baby hippo, the poor animal was in a critical condition. He was actually lucky to be alive. The calf was named Owen and immediately taken to Kenya, at the Haller Park – a wildlife sanctuary.

After Owen got checked and was alright to be placed in his enclosure, he found a friend there. In the same space, there was an Aldabra giant tortoise, called Mzee. His name means old man in Swahili. He was over a century old!

Owen immediately saw Mzee and ran towards him to cuddle him. However, the ‘old man’ didn’t like the idea. He turned his head and hissed at the baby hippo, making him turn back. But this isn’t over yet!

Like all babies, Owen was a persistent brat, following his new friend everywhere in the park – even in the pool! Finally, Mzee gave in and accepted the newcomer as his best friend. You won’t believe what the hippo did!

The staff at the park saw Owen lick Mzee as if he was his baby. The workers believed that Mzee appeared to look like a hippo, as it had similar colors and shape of an adult hippopotamus. This is what an ecologist said…

‘It is incredible. […] the tortoise seems to be very happy with being a ‘mother,’’ said Paula Kahumbu, an ecologist witnessing the strange relationship. Then she explains the whole story, with all the cute moments…

Kahumbu said that ‘after it was swept and lost its mother, the hippo was traumatized. It had to look for something to be a surrogate mother.’ So, he set his eyes on the old tortoise: ‘They swim, eat and sleep together.’ And that’s not all!

The ecologist also said that a young baby hippo would stay with his mom for 4 years. Owen being only one-year-old, and orphaned, he started to follow ‘the tortoise exactly the way it follows its mother.’ Sometimes, he would even do this…

Kahumbu continues saying that whenever someone came too close to Mzee, ‘the hippo becomes aggressive as if protecting its biological mother.’ This odd pair became an international sensation!

The hippo and the old tortoise became the perfect theme for father and daughter Craig and Isabella Hatkoff. Together with Paula Kahumbu, they wrote the book on this adorable friendship and then a second one…

11. The Language of Friendship 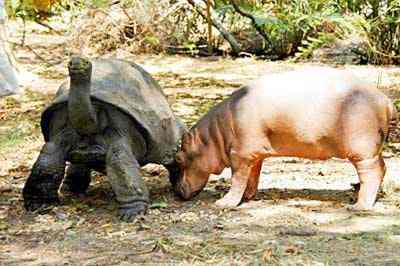 Owen and Mzee started talking to each other by pushing one another, nodding and creating weird noises. Hatkoff stated that ‘their true story that borders on the unbelievable teaches us many beautiful lessons.’

Hatkoff also created a special website for the pair of best friends to offer ‘kids new set of online creativity resources and applications at the same time.’ You won’t believe what the workers at the park said…

8. Owen is Not Really a Hippo

Because Owen learned most of the things from his tortoise ‘mommy,’ he didn’t know how to act as a hippo. So, the staff paid close attention to his behavior, realizing that he was acting more like a tortoise!

Owen indulges only on tortoise food like leaves and carrots, paying no attention to grass – a normal meal for hippos. He also sleeps at nights, unlike the other hippos. And if he hears a hippo call, he won’t respond to it.

6. Tortoises Are Not Social Animals

Owen is attracted to Mzee because he sees him as his mother. However, the tortoise is known to be a less affectionate or social animal, according to Kahumbu. But look at Mzee, who follows the hippo all day long…

It seems that this tortoise has learned to love because he likes to go on walks with his buddy, and he plays with him in the water. Mzee even stretches his neck to get licked by Owen!

Mzee and Owen lived together for almost three years. But as time passed, Mzee’s safety had to be considered. Kahumbu explained that Owen ‘will grow to anywhere between three and four tons—he’s gonna be a big male hippopotamus…’

She continued saying that Owen was young and playful, while Mzee was very old and couldn’t possibly keep up with the calf: ‘He could injure Mzee at any moment. He’s very childlike in his behavior.’ So, they took a decision.

For Owen to slowly let go of his strong bond with Mzee and play with someone more his size, the staff at the sanctuary introduced him to a young female, called Cleo. She slowly replaced Mzee…

Cleo and Owen became inseparable, and Mzee was once again enjoying the life of an old single tortoise. While Owen learned how to ‘hippo’ from Cleo, we cannot stop but wonder if he longed to play with his old pal, Mzee…