There are some things that you never think they could be possible, like a friendship between a tiger and a wolf for example. Tigers and wolves are some of the world’s most dangerous predators and putting them in the same location would usually end up in a fight. However, it seems like this isn’t always the case! Don’t believe me? Well, then keep reading and get ready to be amazed! 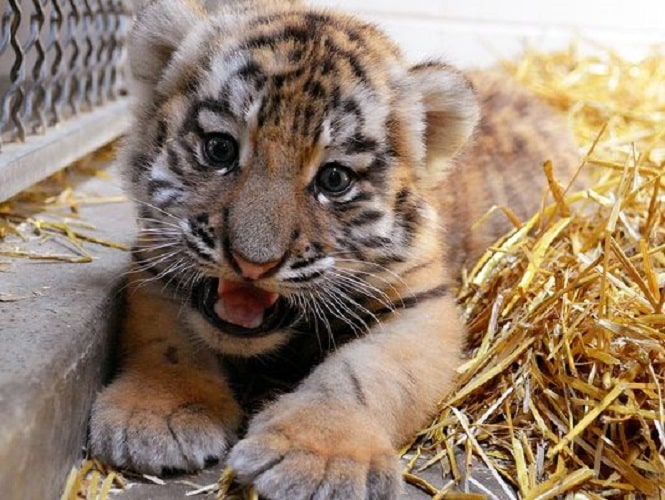 Even though they might become ferocious predators when they grow up, Bengal tiger cubs are the cutest thing ever! This little guy was rescued by a special animal center known as “Tigers” and that’s where he made an unlikely best friend! 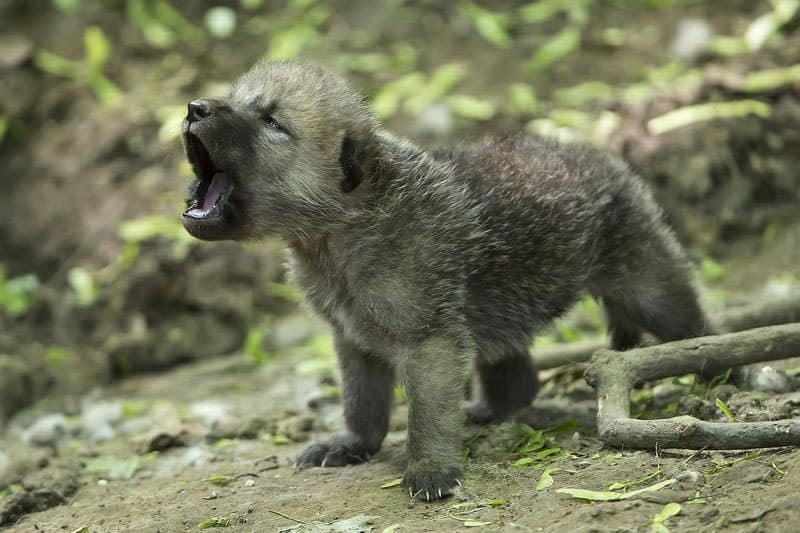 The Tigers association also had a couple of baby timber wolves that were born at the same time as the tiger cub. You won’t believe what happened when the tiger and the wolf met for the first time!! 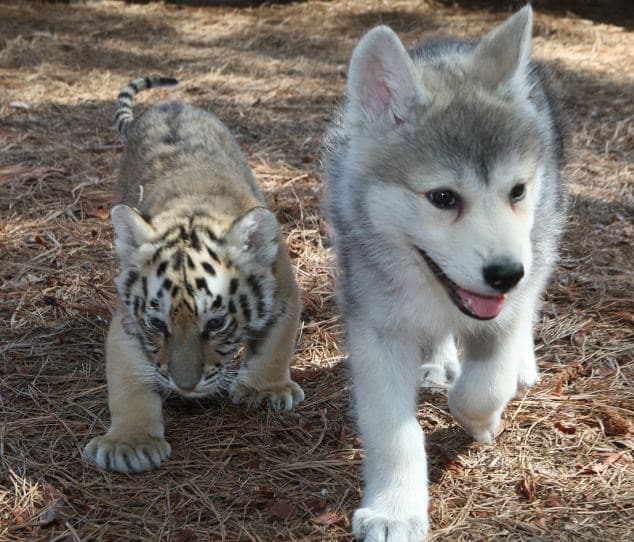 The rescuers decided to take a risk and allow the small animals to play with each other as if to not get lonely. However, everyone was surprised to find out that they actually enjoyed each others company. And that’s not all! 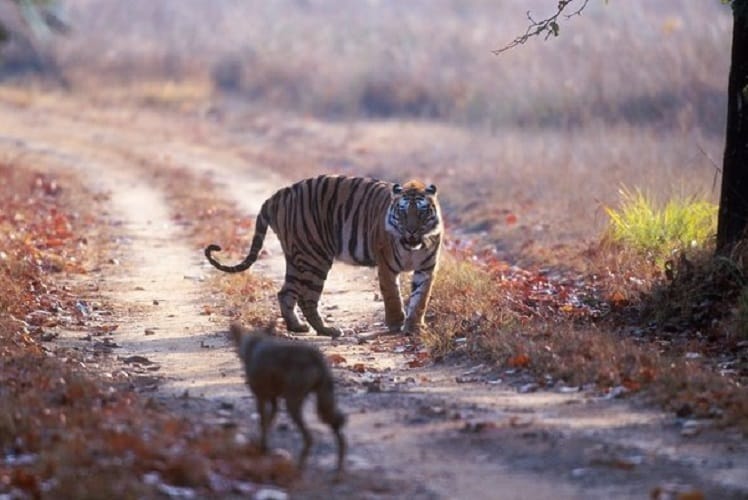 It seems like someone forgot to tell these two that tigers and wolves are natural enemies! They both are predators who love to be the alpha, and they never get along in nature. However, these baby animals couldn’t care less. Just look at how happy they look while playing. Photo #6 is our favorite! 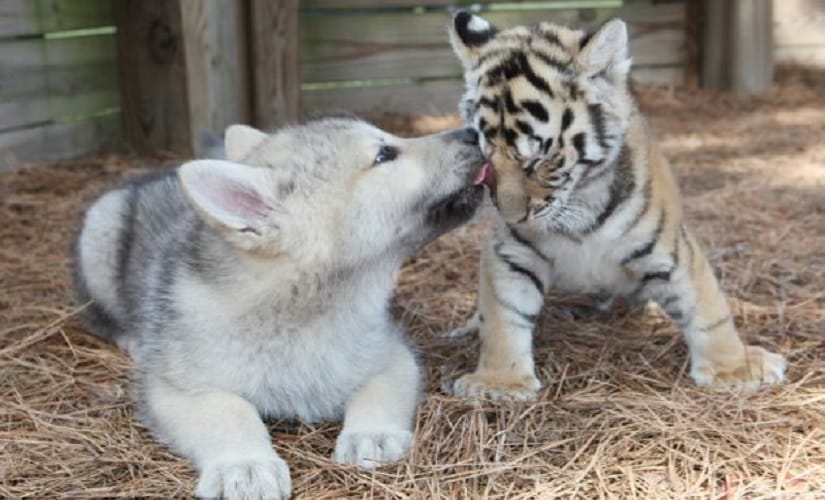 Despite their differences, the tiger became best friends with the little wolf. The rescuers didn’t know what to make of this, but they were glad to see that the two animals were happy and didn’t feel lonely because their mothers weren’t around. 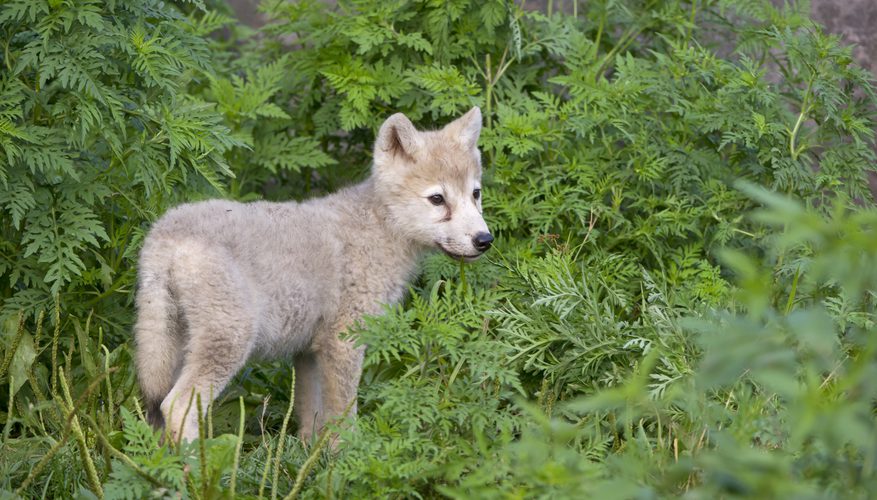 The baby timber wolf has a size advantage over the tiger at the moment, but as we all know, the tiger is going to grow so much bigger than this! The rescuers are saying that the size difference between the two friends might prove to be problematic. But… 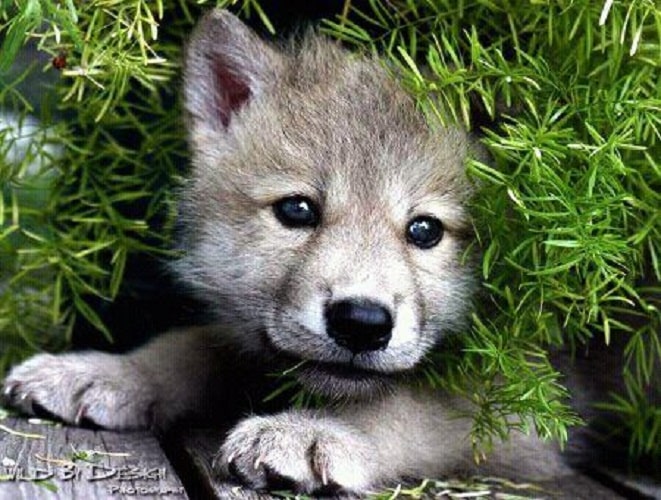 While the wolf might be the one who gets to push the tiger around, things are not always going to be this way. The rescuers are saying that it’s not going to take long before the tiger outgrows the wolf. 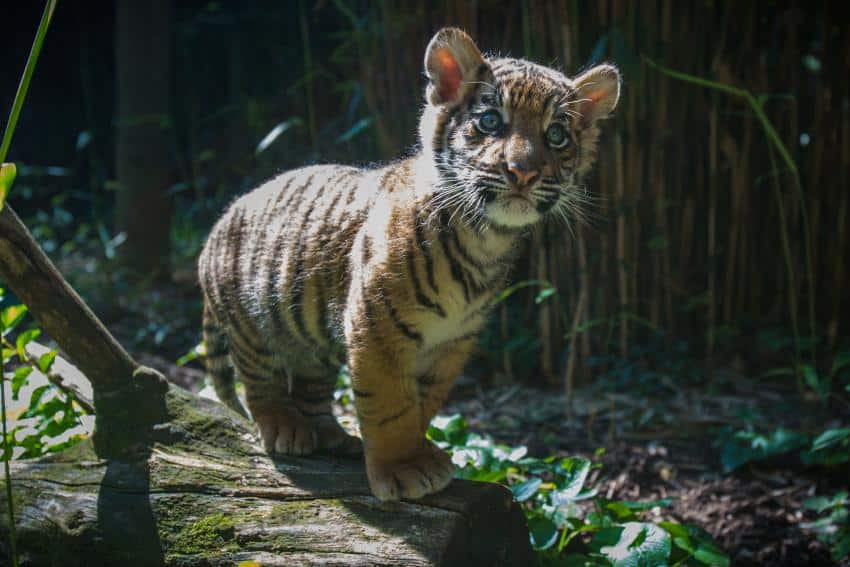 “Even though the wolves are bigger at three months, after another five months it will be the tigers who will be able to push the wolves around”, said Dr. Bhagavan who is the founder and director of the Tigers animal rescue center. But there’s something else that you should know about! 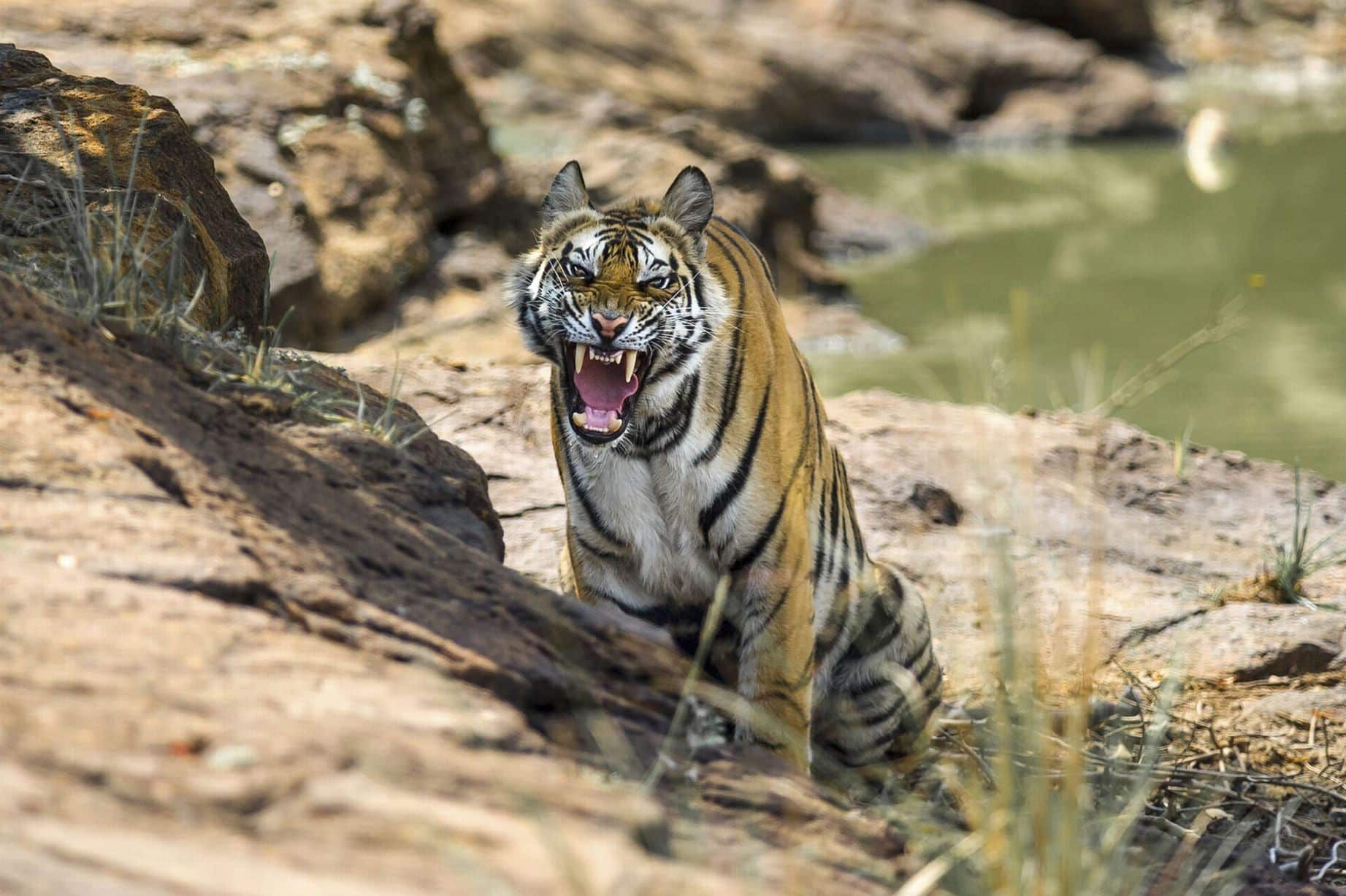 The reason why the tiger’s size advantage is going to matter in the long run is that the rescuers will need to separate him from the wolves. While the two animals might be best friends right now, you can never know when one of them will decide to attack… 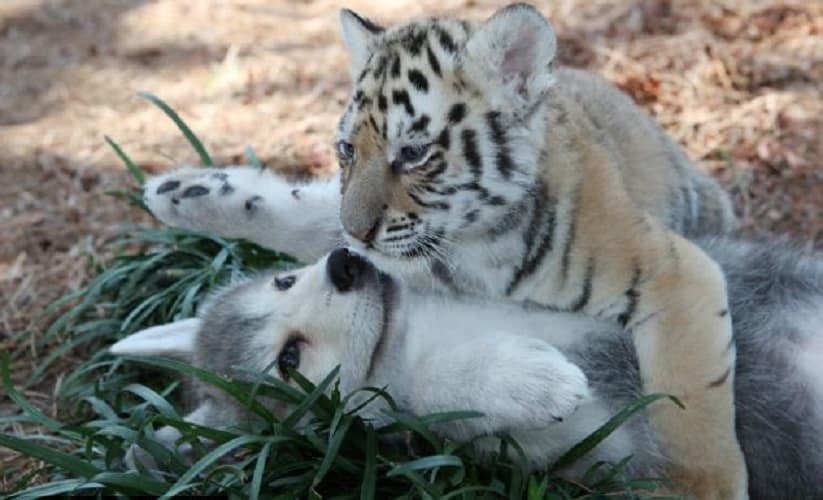 On the bright side of things, the two best friends are currently enjoying their time together. Everyone who goes and visits the animal rescue center is always left in awe after seeing these two. The next picture is even more adorable than this one! 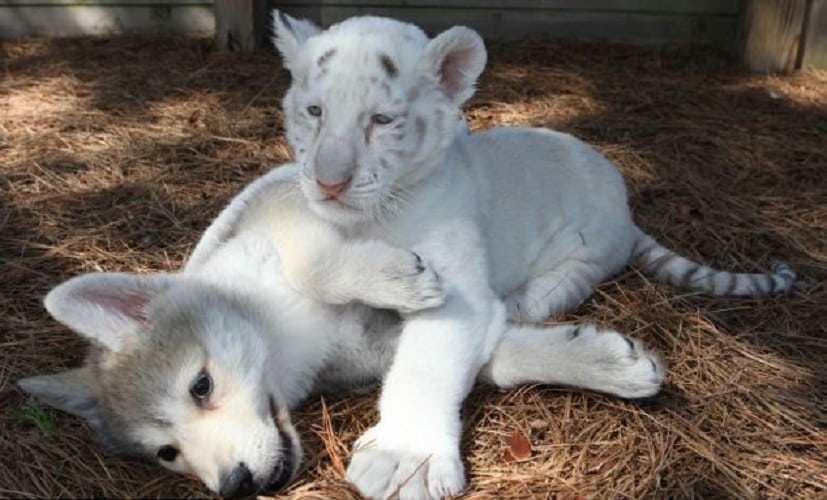 The animal rescue center also has a white tiger cub who became best friends with the wolves. Isn’t it amazing how cute these little animals are? Especially when considering how big and mean they will get in a matter of months. 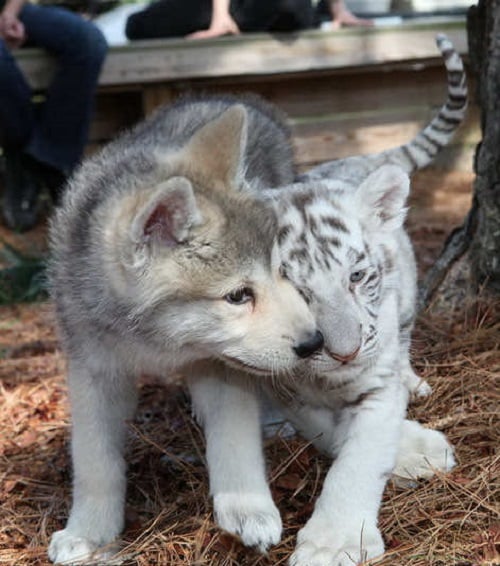 The rescuers say that the only thing these two best friends love to do more than to sleep is to play around the yard all day long. In fact, the tiger and the wolf sometimes get in race competitions! 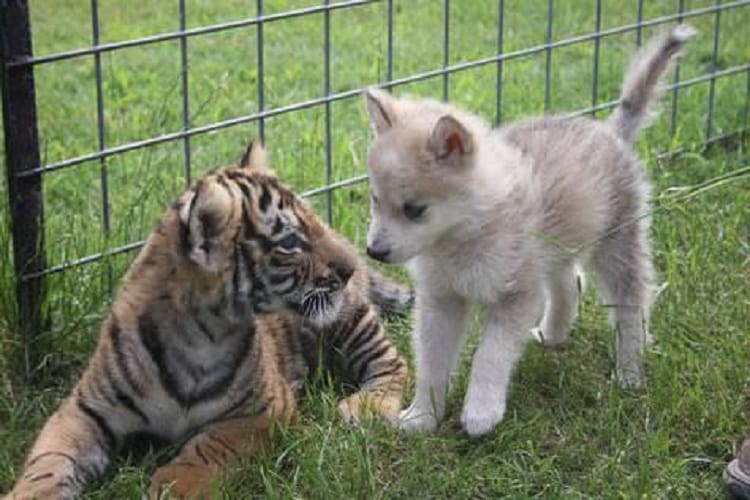 Wouldn’t you love it to have these two adorable animals as your pets? I know I would, but I bet that the upkeep is super expensive. Just imagine how much meat a tiger and a wolf eat per month… 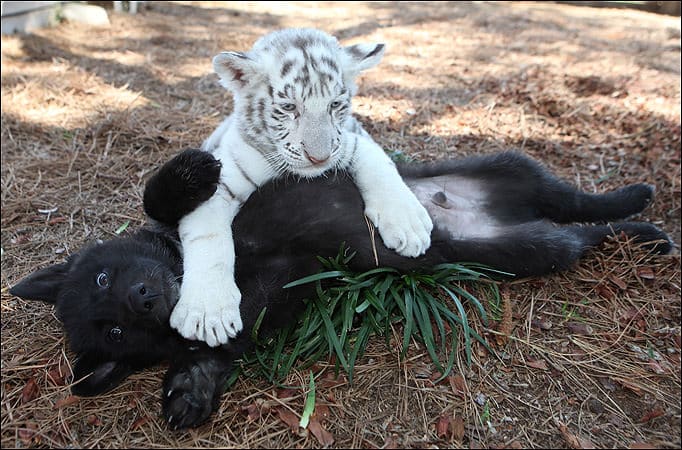 As adorable as they might be, we need to remind ourselves that these baby animals are going to grow up and become fierce predators. Let’s hope the rescuers manage to separate them without causing them too much emotional distress and integrate them with their kin. 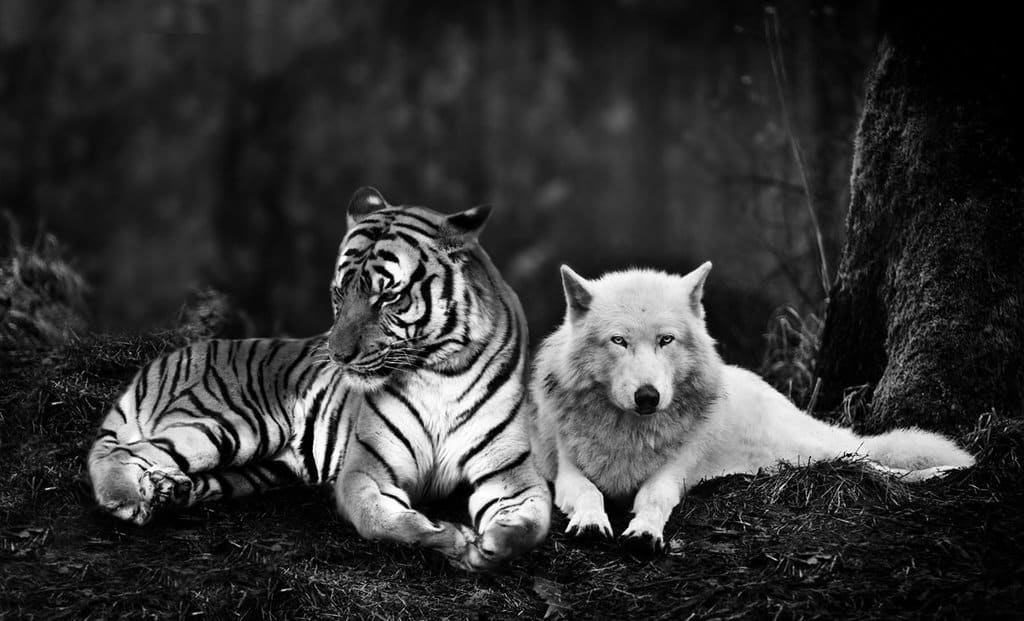 Seeing the wolf and tiger babies playing around has been amazing, but there are even odder animal friendships that you need to see in order to believe. Take for example the next picture! 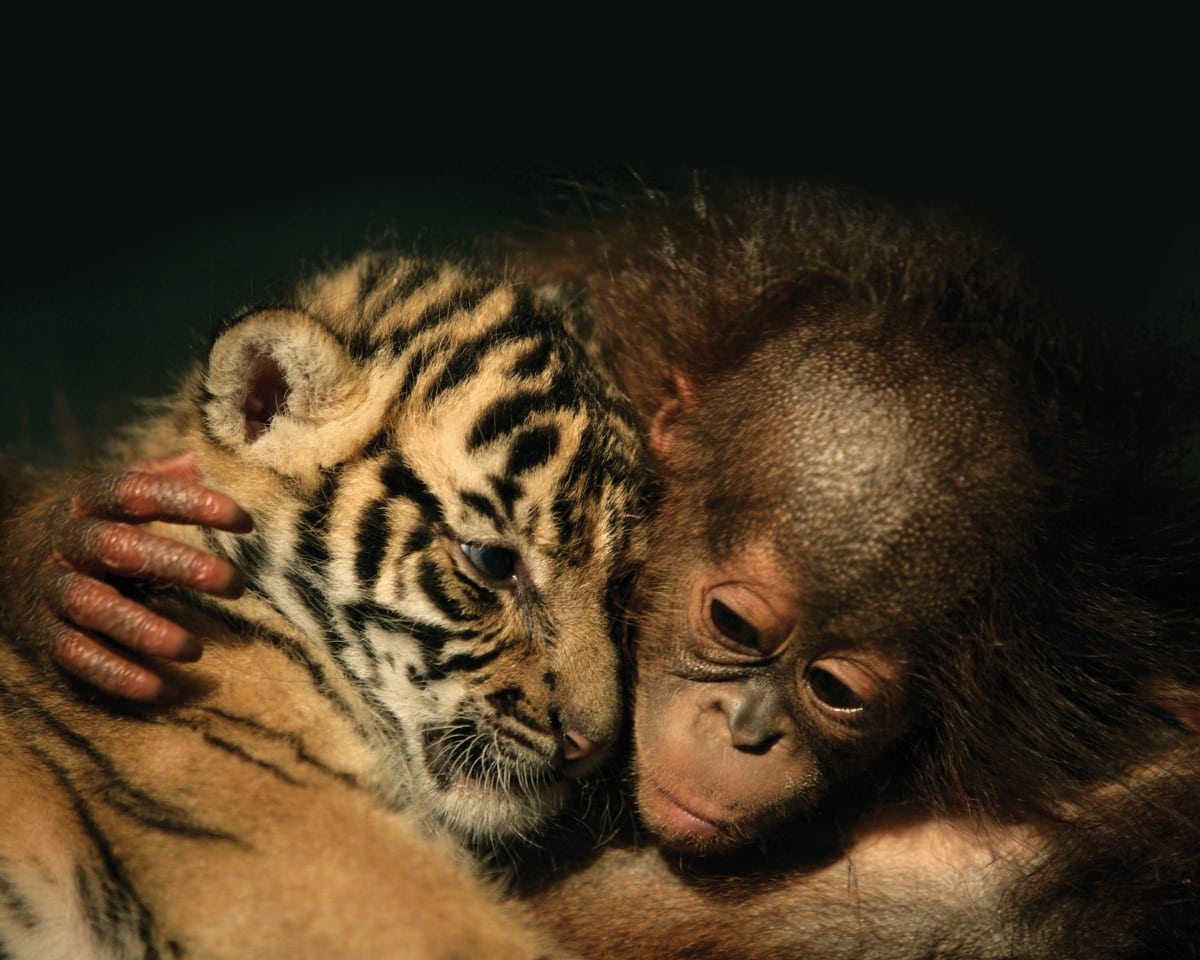 From the looks of it, tigers seem to be the friendliest animals ever! Who would’ve guessed that a tiger and a monkey can get this close without having bad intentions? 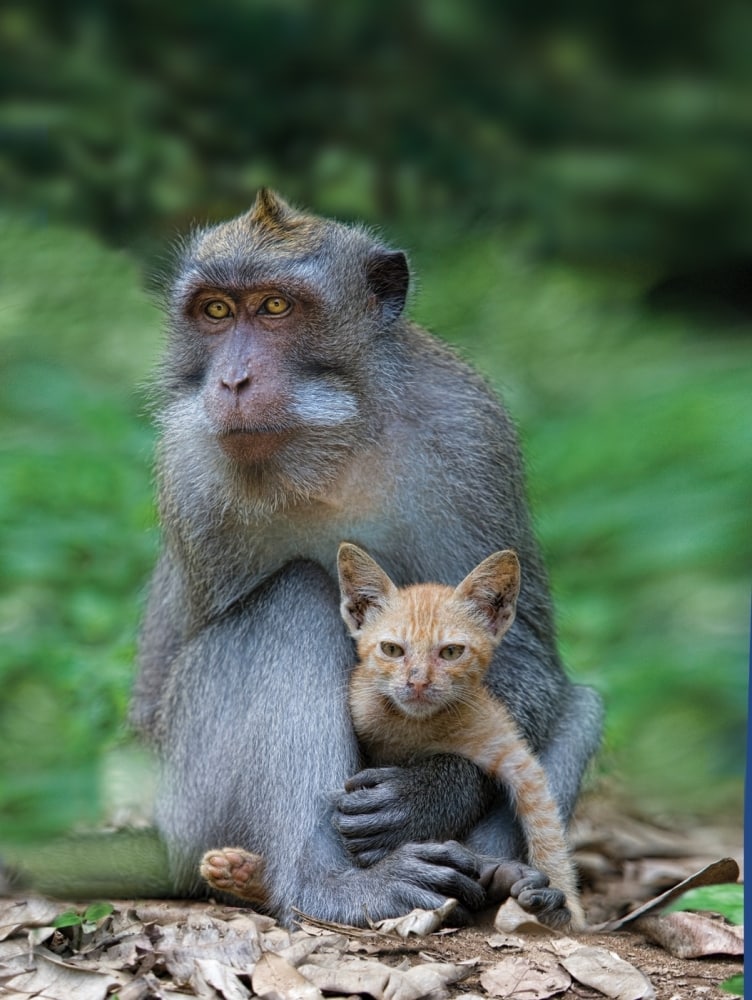 I don’t know what’s funnier, the monkey’s hilarious hair or how shady this cat looks? It seems like they are scheming on how to steal some bananas. The next picture is even funnier than this! 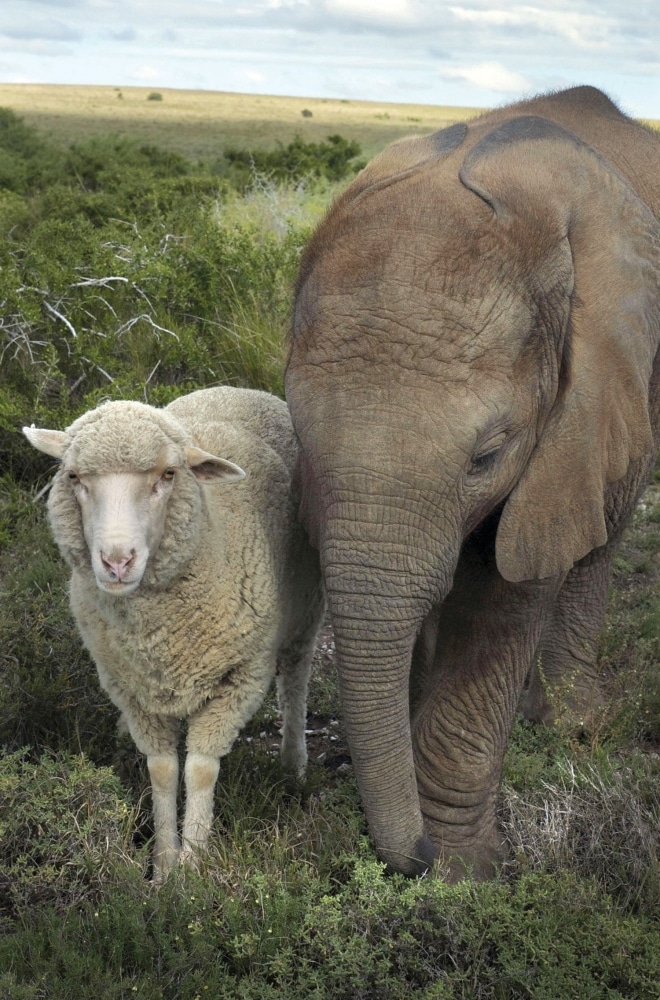 This is undoubtedly one of the oddest animal friendships you will ever see. I mean, sheep and elephants aren’t even supposed to meet each other! One lives in the jungle while another jumps around green fields. Talking about the jungle, you need to see the upcoming picture! 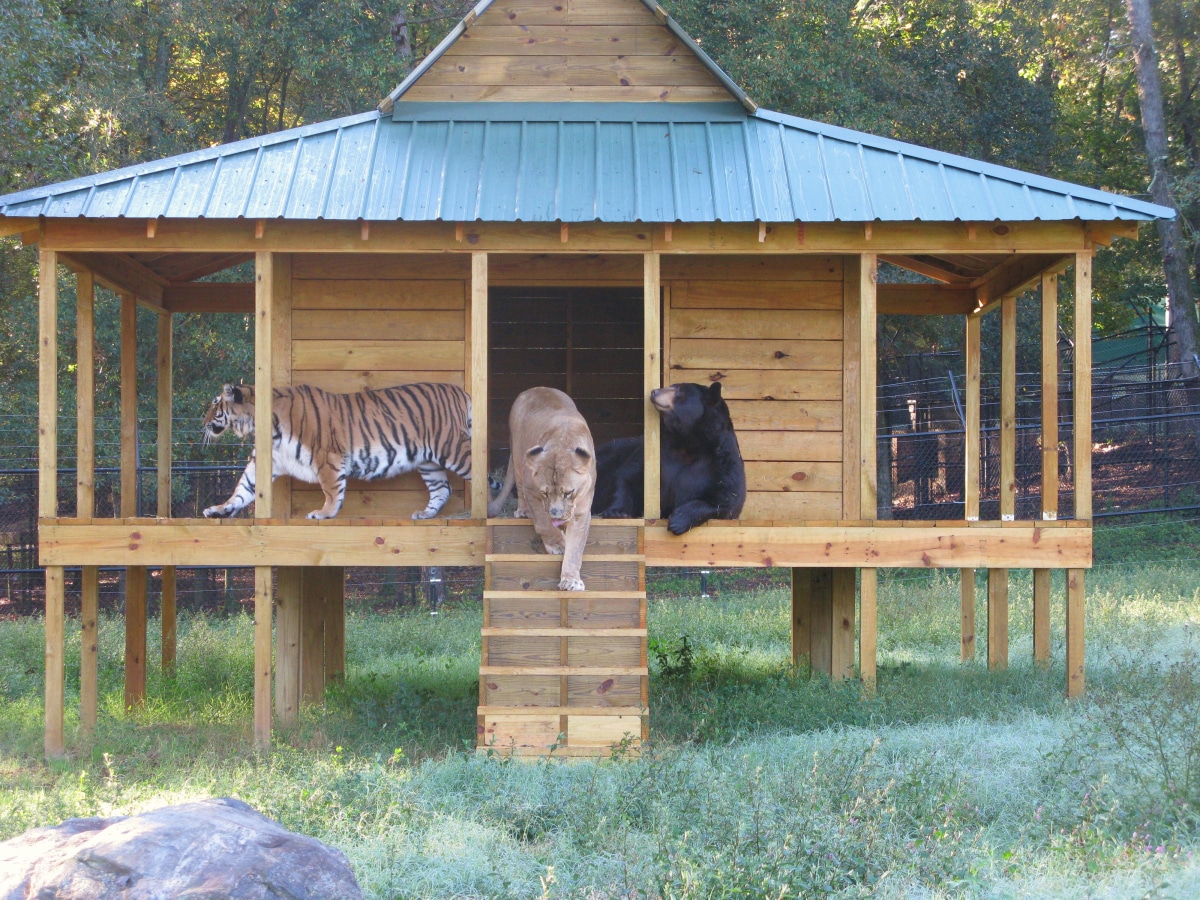 This picture makes it look like Disney released the promo poster for the live adaption of “The Jungle Book”. The only one who misses from this picture is Mogly. 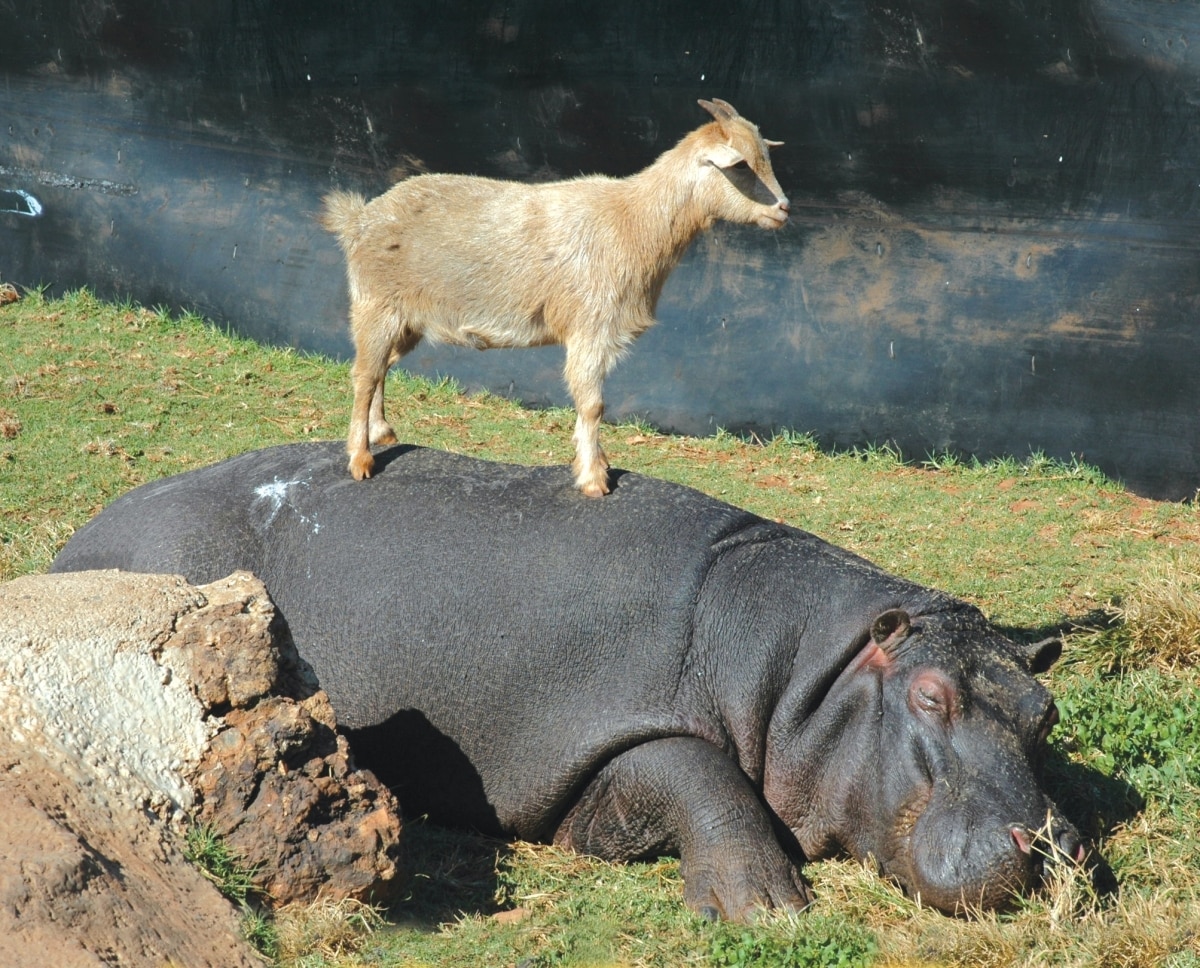 Goats are known for climbing mountains so steep that it makes it look like they are defying gravity. Although, I would’ve never believed that they have enough courage to climb on a hippo.