Senior Terrier Was Abandoned In A Field With A Note, But When This Man Found Her…

It was early one Sunday morning in the wet and dreary month of April 2017, that a man stumbled across a lonely dog hidden behind some shrubbery in a field. The sight was an odd one, as the dog had been tied up there and all scattered around it were what seemed to be its’ belongings. 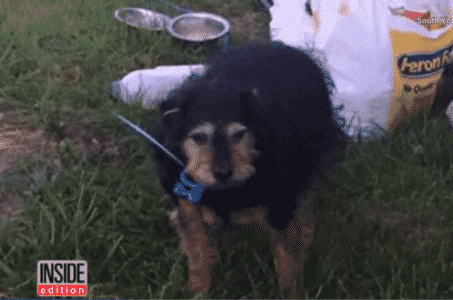 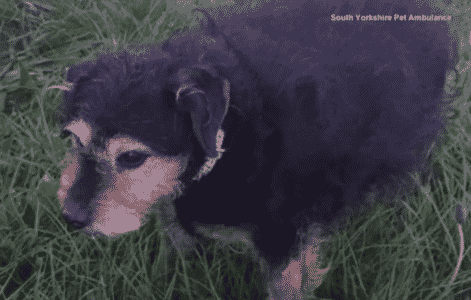 The man to a closer look at the pup and was able to identify a name on the collar around the elderly dog’s neck. Her name was Tessa. 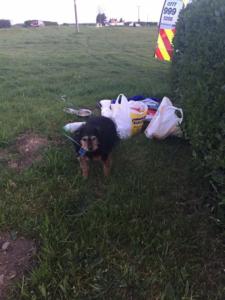 Tessa was cold and wet and appeared to have been out in the elements for hours. The man knew she needed immediate help. So, he decided to make a phone call… 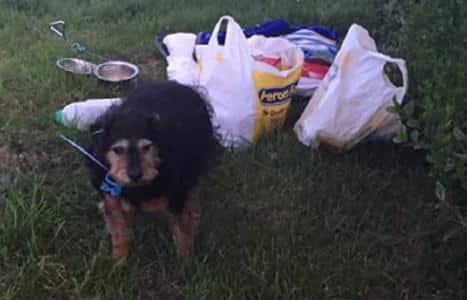 Immediately, the man called South Yorkshire Pet Ambulance, a local animal hospital. As the man waited for the pet ambulance to arrive, he looked at the belongings scattered around her. There were a number of things in plastic bags, so he began to look through them. 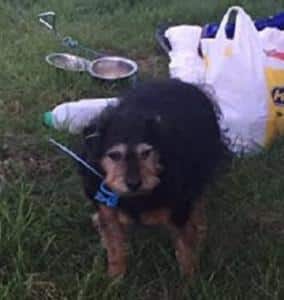 The man took note of the food and water bowls, some bags of toys and bedding, and something else which was rather peculiar… 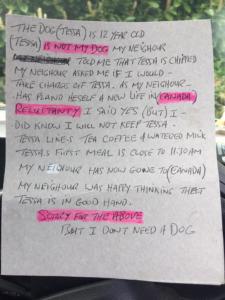 It was a folded up piece of paper which appeared to be a handwritten note. He took a closer look at it and started to make out the writing which was wet from the rain. It read: 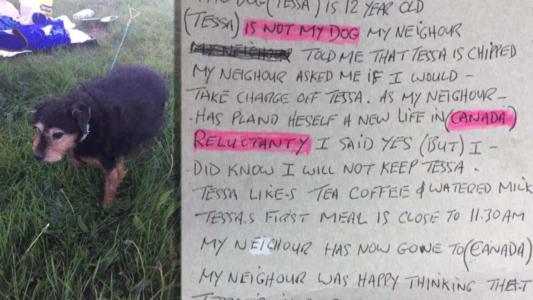 The man began to read the note and quickly realized how heartless and crude it was. It was a note explaining why Tessa had been dumped in the field. 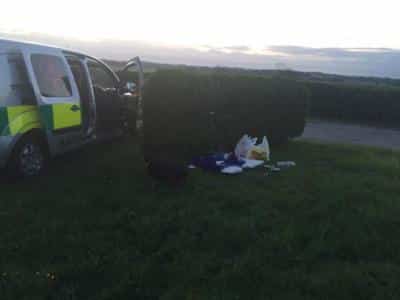 Not long after the man made the call did South Yorkshire Pet Ambulance arrive. The man explained to the vets what he had found and so they took a look around. The man handed over the note to the vets. Their reactions were laced with heartache for the dog and anger towards the person who left her there.

12. Passed Off by Her Owner 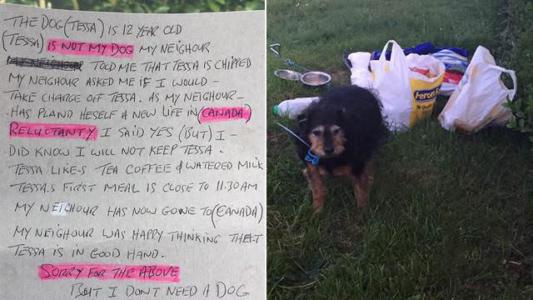 As they read the letter, they came to find that poor Tessa was supposedly passed off to a neighbor when her original owner decided to move overseas to Canada. But, the neighbor who agreed to take Tessa in, and who wrote the letter, had no intentions of keeping the old dog. 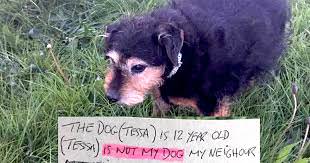 As soon as Tessa’s owner was out of the country, this cowardly neighbor heartlessly dumped her off in a field where apparently they hoped someone would find her. Also included in the letter were instructions on how to “care” for Tessa: 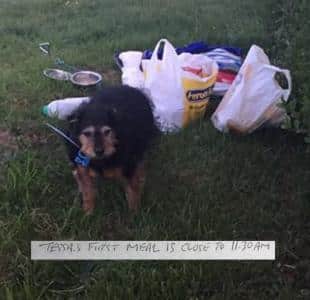 The anonymous neighbor who abandoned Tessa scribbled down some notes on what to feed Tessa and what her dietary preferences were. These preferences included the most bizarre things that a dog owner would know not to ever feed their pup: 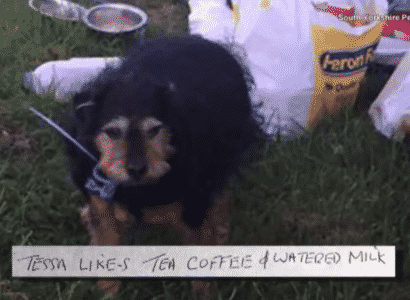 In the letter, the anonymous person explained that Tessa prefers things like coffee and watered down milk. What kind of person would feed a dog coffee, you’re probably asking yourself?… 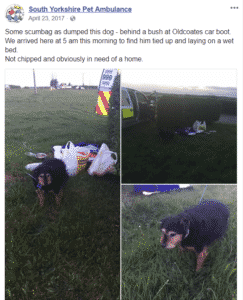 The South Yorkshire Pet Ambulance vets were asking themselves the same question as they shook their heads and documented the scene of this terrible crime. Not long after they snapped photos and uploaded them to Facebook did the news go viral! 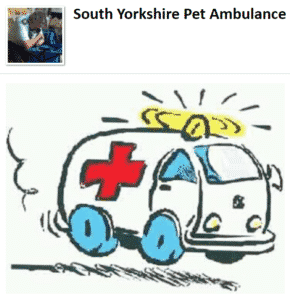 People from South Yorkshire and beyond were responding to the nature of the post with pure outrage. What they said about the people responsible for such cruelty was unbelievable and yet, called for… 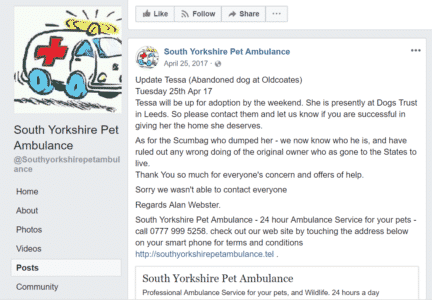 “Shame on the woman who went to live in Canada… And shame on the bloke who tied up and dumped an elderly dog in a field with the expectation of someone finding her,” were some of the words posted by South Yorkshire Pet Ambulance directed at those responsible for leaving Tessa. 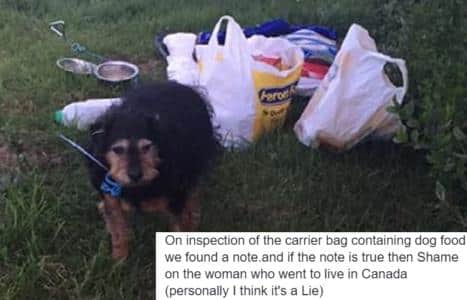 They also wrote that the very much doubt the owner actually moved to Canada. They had other speculations about this so-called “neighbor”… 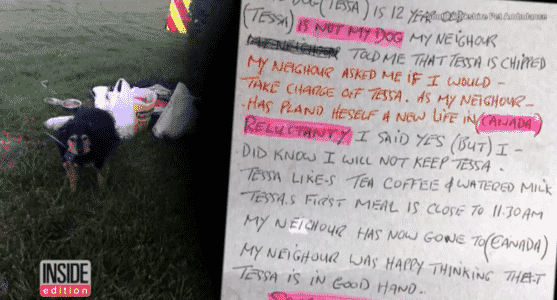 Their speculation was that the “neighbor” was the original owner and grew tired of caring for the old dog. So, instead of burdening themselves with her, they offloaded her assuming that someone else would come along and rescue her.

3. Saved in the Nick of Time 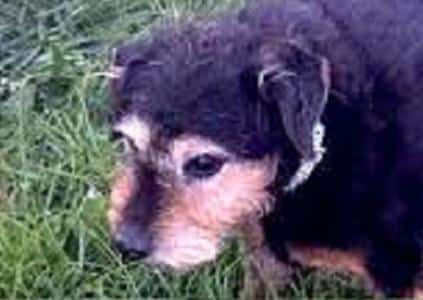 And thank goodness she was rescued! If she had been left much longer on her own the poor old girl could have become seriously ill from being left cold and wet.

2. A Warm Place to Call Home 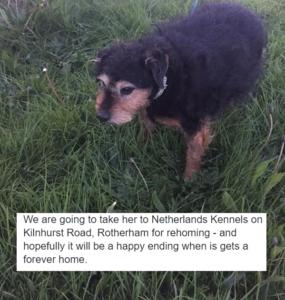 Tessa is now being cared for in the warm and cozy shelter of the Netherlands Kennels in Rotherham, England. Here she waits for the right people to come along and give her the forever home that she so deserves!

1. Learn to Love Unconditionally as They Do! 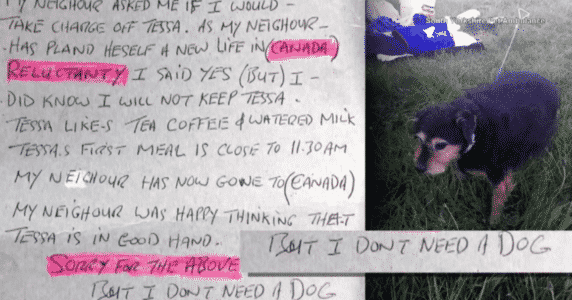 Unfortunately, this seems to be a situation that occurs far too often, where animals are left behind or abandoned by those who no longer wish to care for them. No animal deserves to be left out in the elements to fend for themselves and nothing warrants an excuse to abandon an animal. Animals are capable of loving unconditionally and we as humans need to learn to return that love! <3