Rescued Cheetah Sends Everyone Into Tears After Seeing His ‘Adoptive Dad’

This heartwarming story of a Cheetah reuniting with his former human acquaintance is simply astonishing. Dolph C. Volker, a 50-year-old respondent at the Cheetah Experience Breeding Center in South Africa has been taking care of furry felines for a long time now.

20. Cheetah’s Reunion With His Adoptive Father Is Stunning 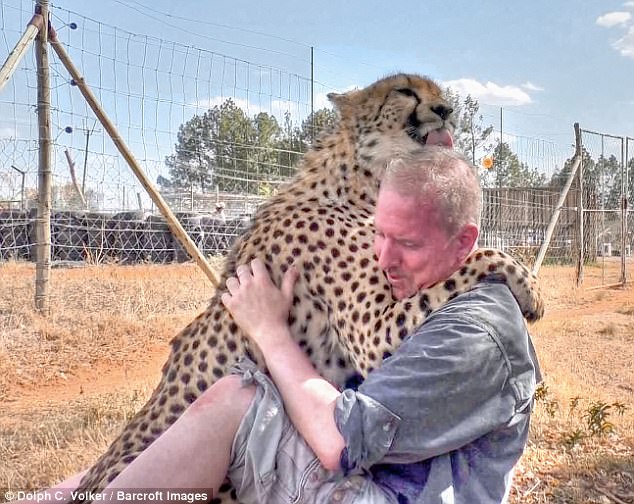 ‘Gabriel’, an abandoned Cheetah got close to him like none others at the makeshift facility. After spending a year with the animal, Dolph C. Volker had to move back to the U.S. for official reasons. 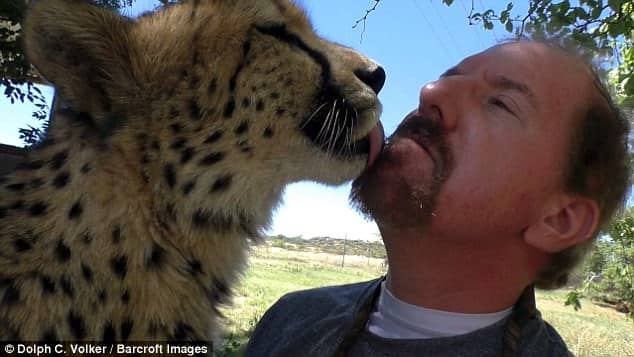 But when fate had him revisit Africa one more time, his reunion with Gabriel not only brought tears to everyone’s eyes but also restored faith in humanity. 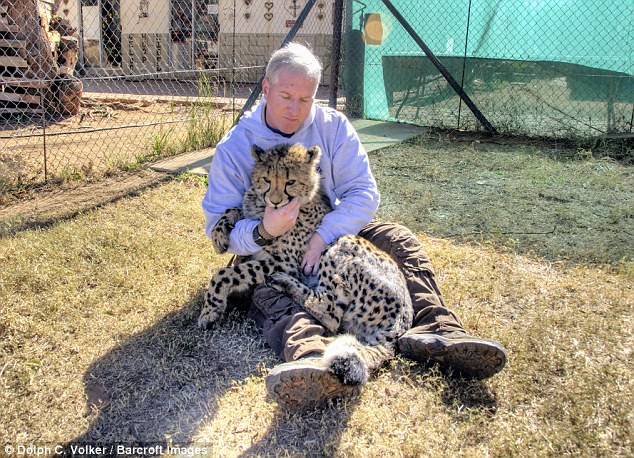 Dolph C. Volker has been a volunteer at the Cheetah Experience Center in South Africa for several years now. Gabriel certainly isn’t the first Cheetah to get in contact with Dolph; he has demonstrated a knack for taking care of predators and wildlife animals since over a decade.

17. But How Did Dolph Meet Gabriel? 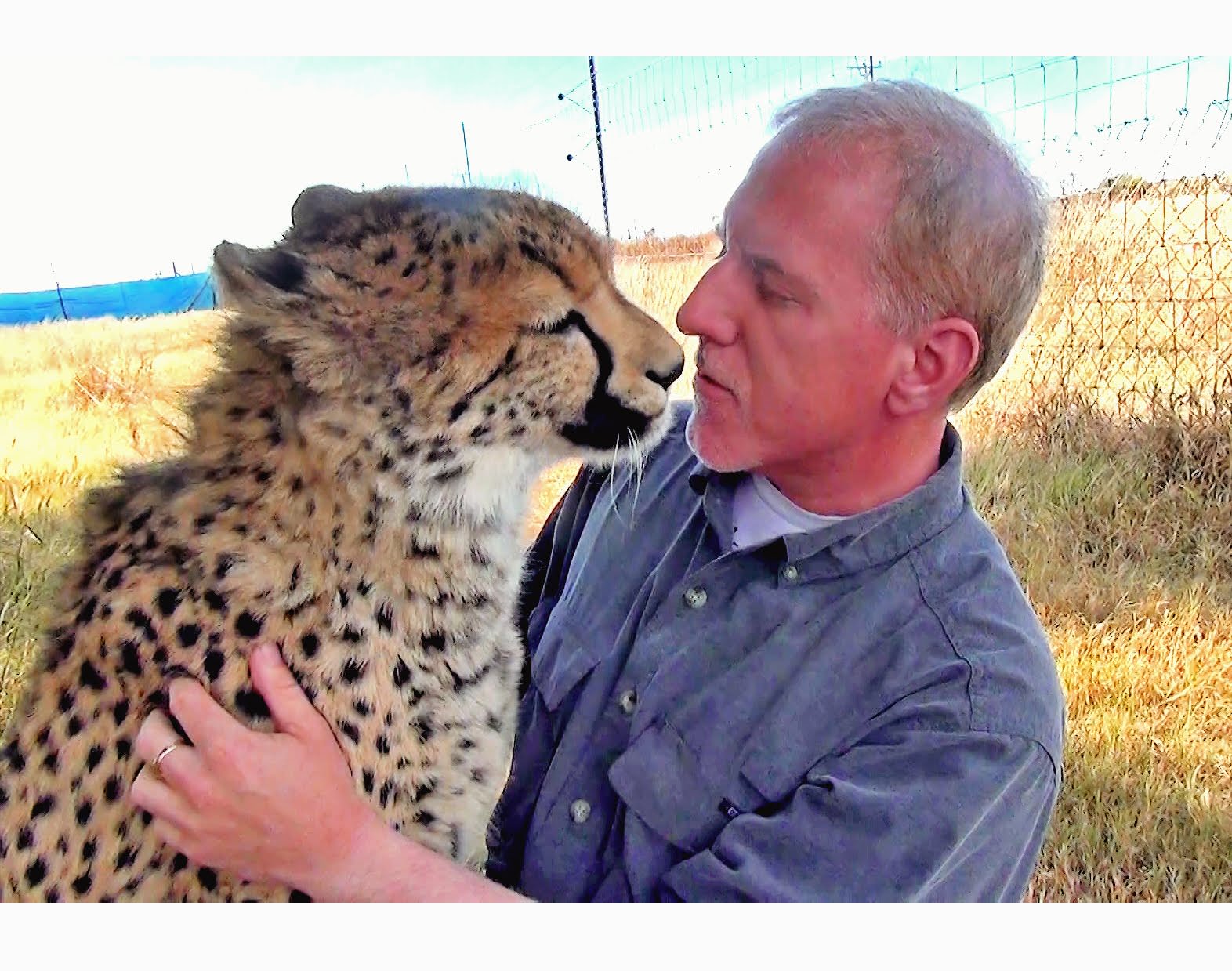 It was at Cheetah Experience that he got the “opportunity” to take care of Gabriel, an abandoned Cheetah with several medical conditions. The guy met Gabriel when the Cheetah was merely 8 months old. 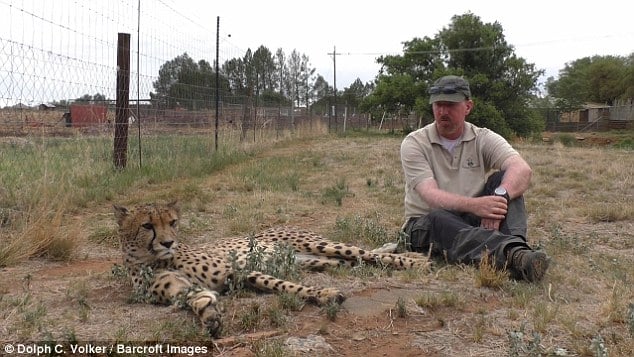 Both spent a year together and formed an inseparable bond which only became evident when Dolph seized the opportunity of meeting his former buddy once more after a whole year. 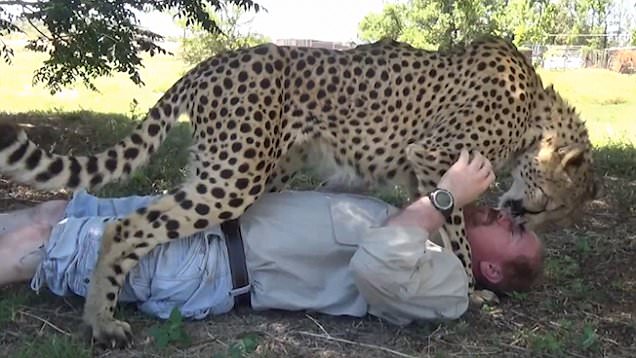 What happened next is completely unexpected; the moment Gabriel laid eyes on Dolph, he sprinted towards him at an alarming speed.

Everyone at the Cheetah Experience center thought that the animal had gone crazy, and was aiming to attack Dolph C. Volker. As it turns out, the Cheetah immediately hugged his adoptive father and kept licking his face all over. 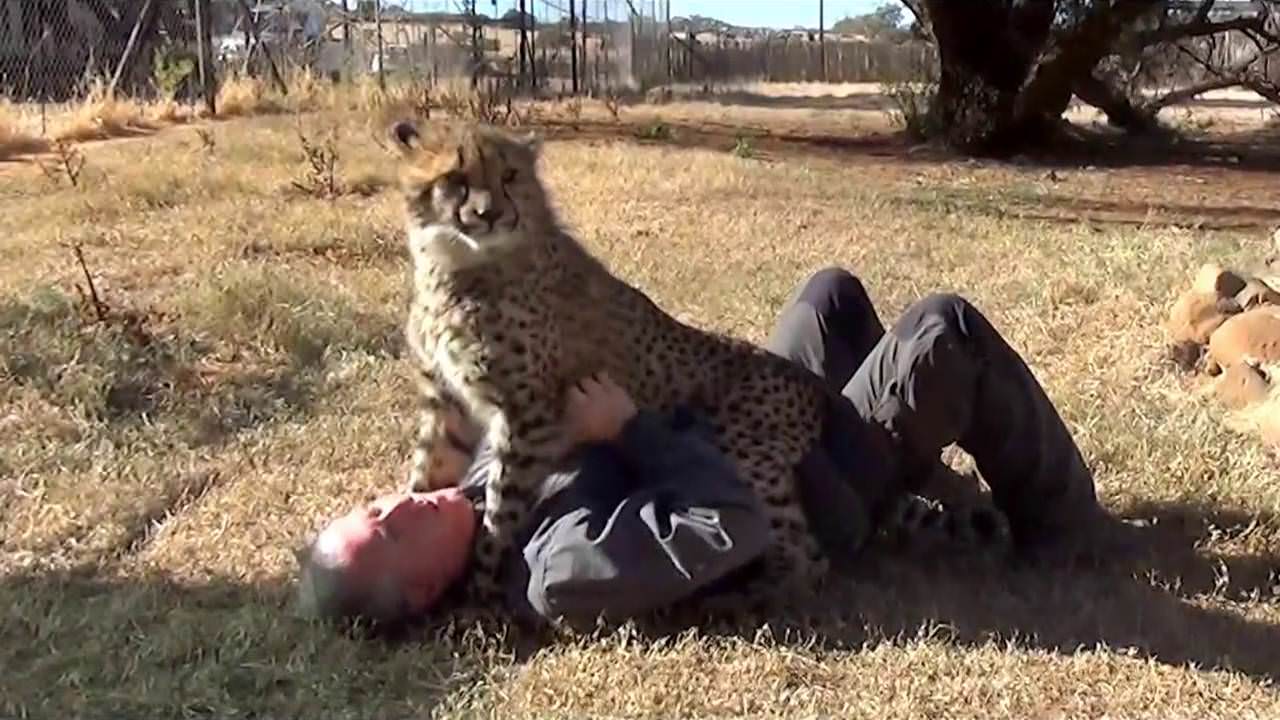 What’s more interesting is that Gabriel refused to part with Dolph. He hugged him tightly and nuzzled his cute little nose around the old man’s neck and face to demonstrate an intimate physical bond.

13. Gabriel’s Behavior As a Cheetah Was Completely Unexpected 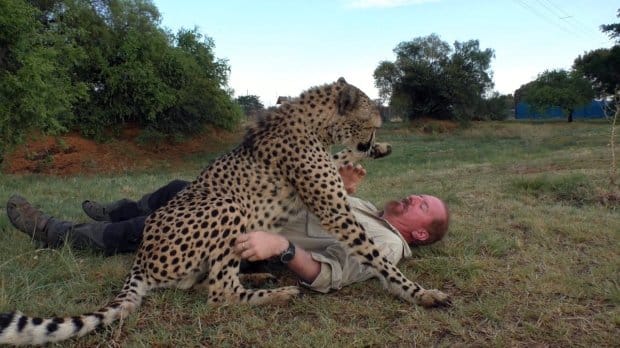 Such behavior for a cat, whether it’s grown up or a house pet, is certainly uncanny. Cats do not associate with humans like dogs do, but there are exceptional cases.

12. Dolph Volker Imprinted On Gabriel When He Was a Cub 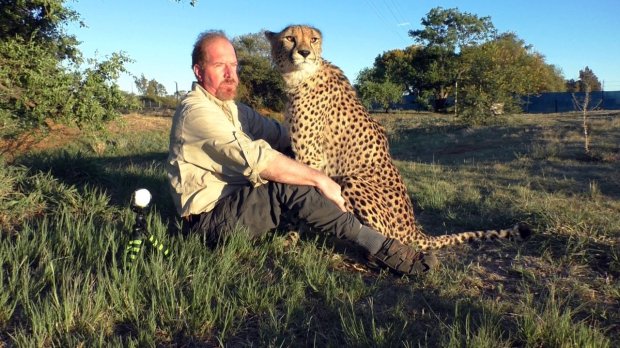 Gabriel’s and Dolph C. Volker’s case is definitely something that defies imagination. The Cheetah Volunteer expert somehow imprinted on the young Cheetah, which means that the “cat” accepts him as the alpha male or his master. 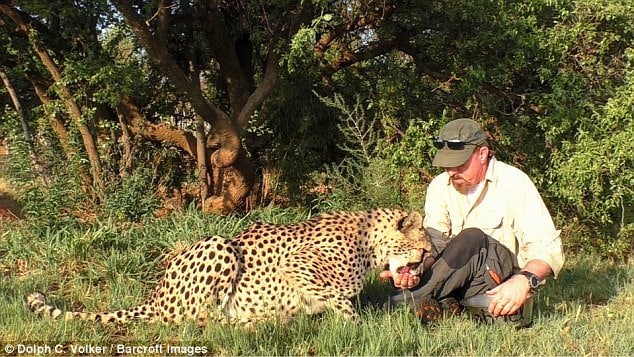 Now whenever Dolph gets time to revisit his old friend in South Africa, he is welcomed with the same amount of hospitality and warmth from Gabriel, the energetic Cheetah.

10. Wildlife Rescuer Opens Up About His Experience With the Cheetah 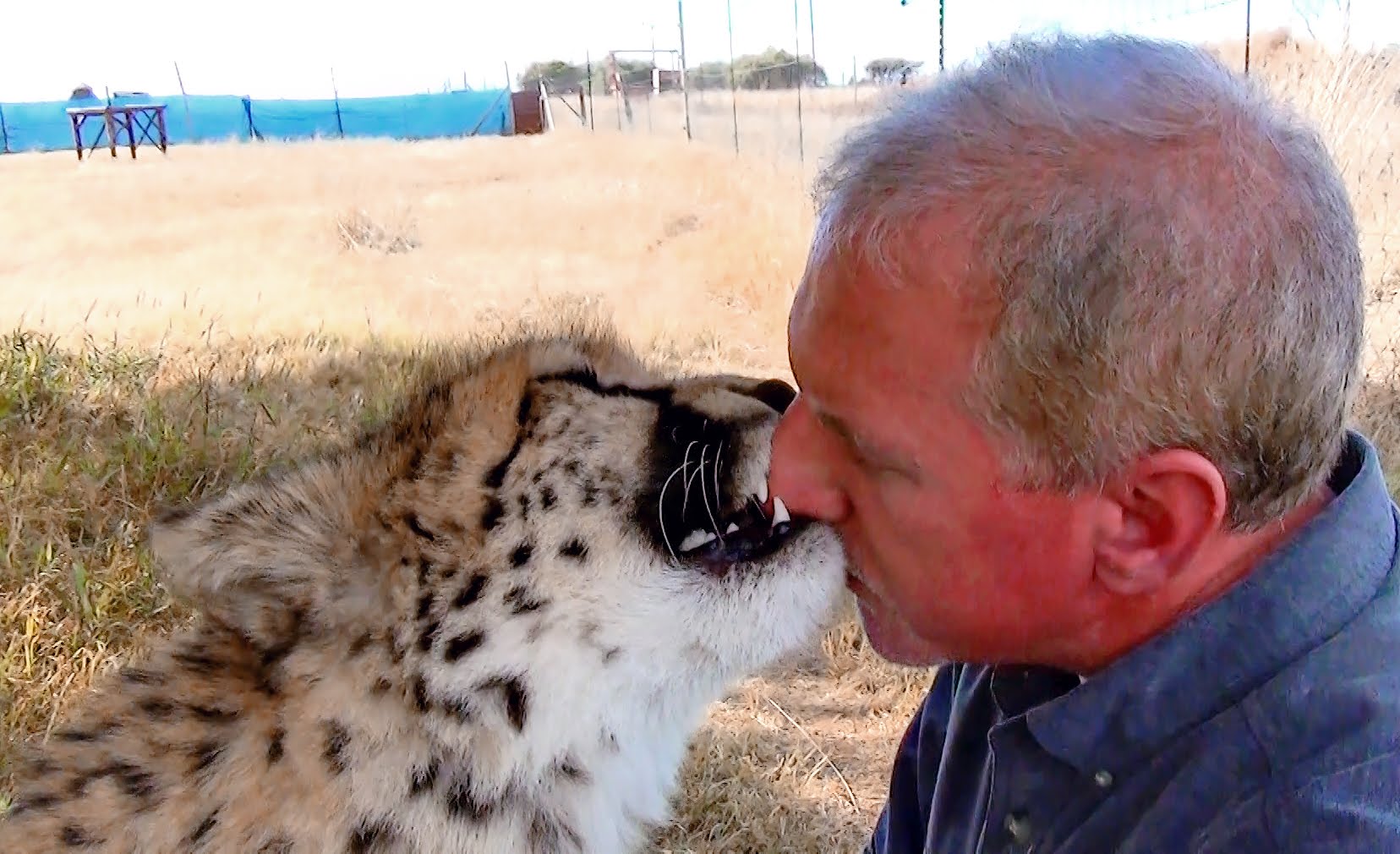 When asked about the mystery behind his bond with Gabriel, Dolph recently said, “It takes a lot of time to reach that imprinting stage with a wild animal – a wild predator to be specific.”

He further continued, “It all started when this Cheetah was a little cub and I think I just got to know him at the right tender age. It was an absolute joy to become friends with Gabriel.”

9. It Wasn’t Easy to Earn the Cheetah’s Trust 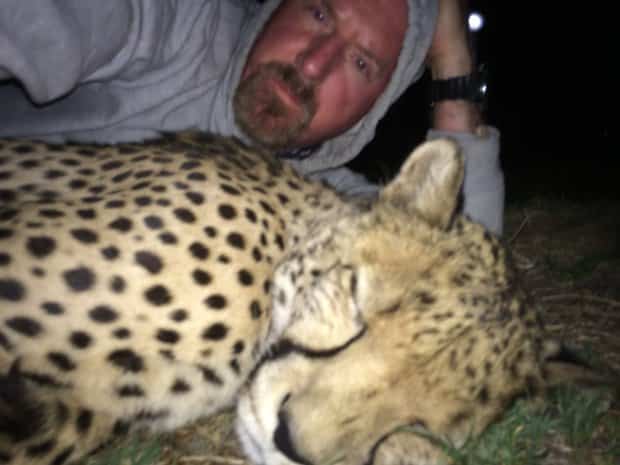 In reality, Dolph Volker’s relationship with the Cheetah wasn’t always an easy ride. At first, the Cheetah wouldn’t let anyone get close to him. 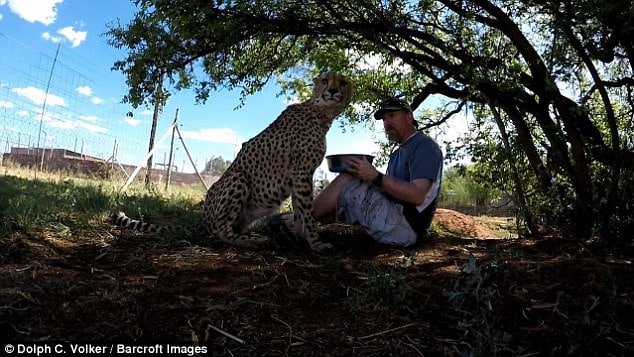 It took a lot of time for Dolph to earn that level of trust. In fact, the guy vividly recalls that he only started hand feeding Gabriel until very recently because the Cheetah didn’t “trust” him enough to get to that level of their relationship.

7. Gabriel and Dolph’s Bond Is Unique 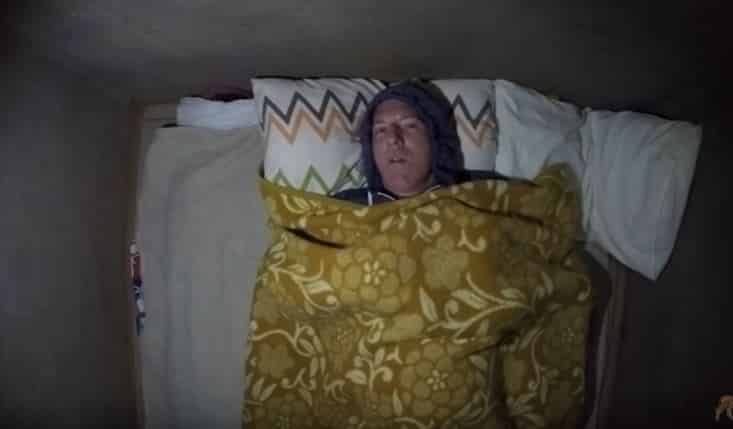 Gabriel has always been very special to Dolph for a number of reasons. The fact that this Cheetah had a unique personality; he’d cuddle and hug, and would prefer to stay with his adoptive father rather than other caretakers at the facility.

6. When Separated, the Cheetah Would Act In a Strange Way 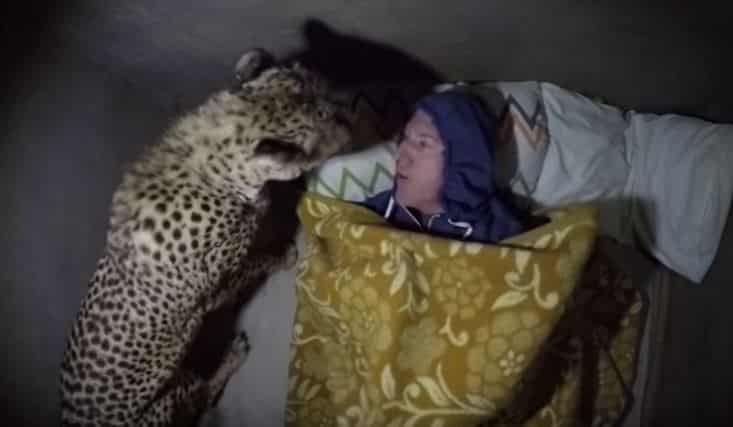 After their one year separation, Gabriel started showing signs of loneliness and depression. He refused to eat or mingle with other friendly staff members of Cheetah Experience. It was determined that the Cheetah’s life would get in danger if he continued to suffer from emotional stress.

5. Animal Shelter Experts Had to Call Back Dolph! 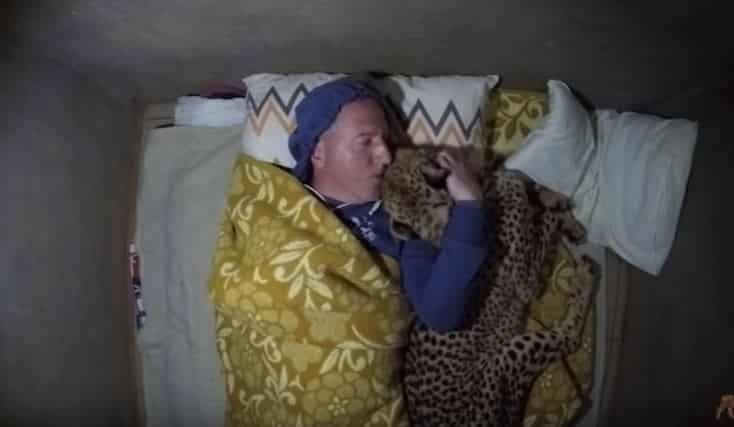 The animal shelter officials eventually had to call back Dolph C. Volker, who was overtaken with joy when he met the Cheetah once again. 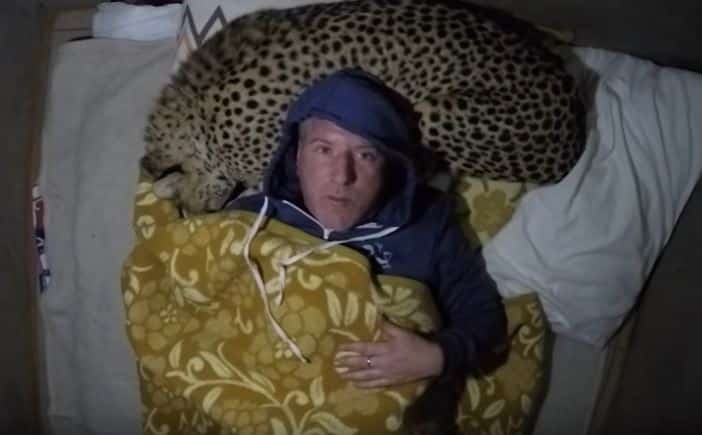 Dolph was relieved to know that he could buy Gabriel, and be his legal owner. Although he has decided to bring back the Cheetah to the States, there’s still a lot of paperwork to go through. “He remembers all the special things we used to do and I remember what he used to like to do when he was a cub,” said Dolph recently.

3. You Can Help Dolph and Gabriel Get Back to the States 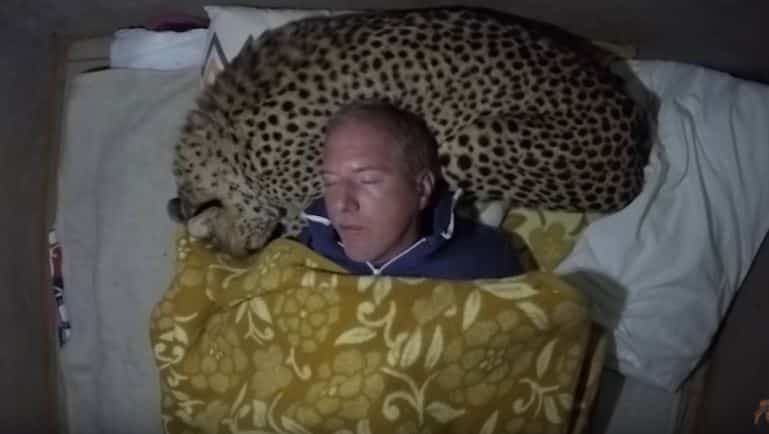 Cheetah Experience is a registered, non-profit cheetah-breeding centre that also takes care of leopards, lions, a tiger, servals and caracals. If you are interested in making a donation or helping Dolph gather funds for moving Gabriel, please don’t hesitate in contacting the concerned agents.

2. Wildlife Expert: Dolph Has a Knack for Taking Care of Predators 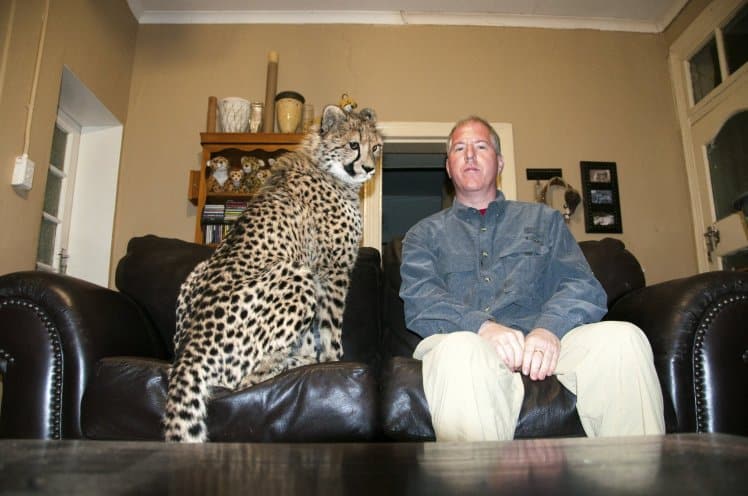 By the way, Gabriel isn’t the first Cheetah to be rescued by Dolph. He has been known to take care of other predators from the wild life from time to time. Such was the case of a hopeless female Cheetah suffering from sterile meningitis.

They named her Faith a young female Cheetah in need of desperate help. Dolph loved spending his nights with Faith in the confined box that was actually meant for the female cub only. For some reason, Faith loved sharing a sleepover and snuggling up witth Dolph.

1. Dolph Has Big Plans for Gabriel and Other Cheetahs 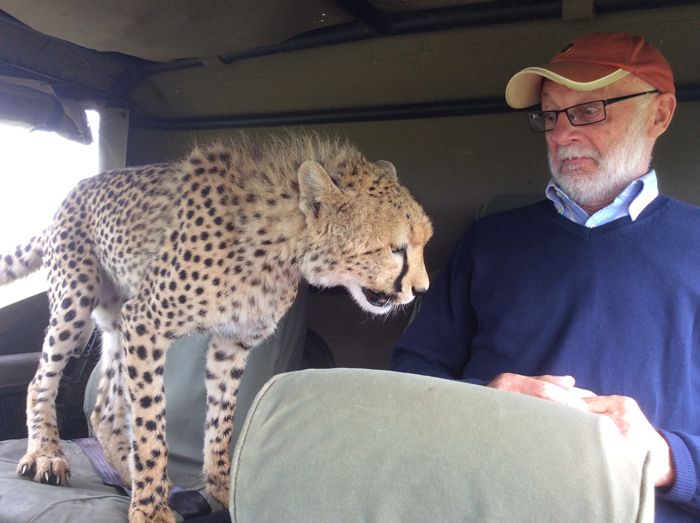 It is no surprise that the two of them were able to get so close to one another over a short period of time. The 52 year old wildlife expert says that he is looking to dedicate that rest of his life to supporting hopeless animal cases that are otherwise rejected by majority of animal shelters.