Have you ever heard of a friendship shared between a dragon and a cat? Sounds like something you’d read about in a mythical fairytale, right? Well, we’re here to tell you that sometimes truth is stranger than fiction. Here’s the adorable friendship of Charles the female bearded dragon and Baby the cat. 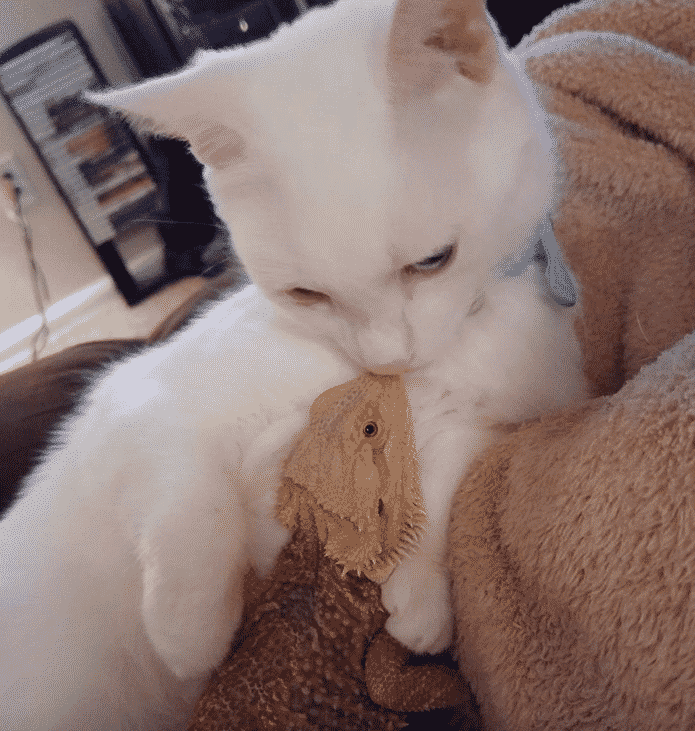 Meet Charles the female bearded dragon and Baby the cat. At first glance, you might think that your eyes are deceiving, but they are not! These two love each other and love to cuddle. So how did this start? 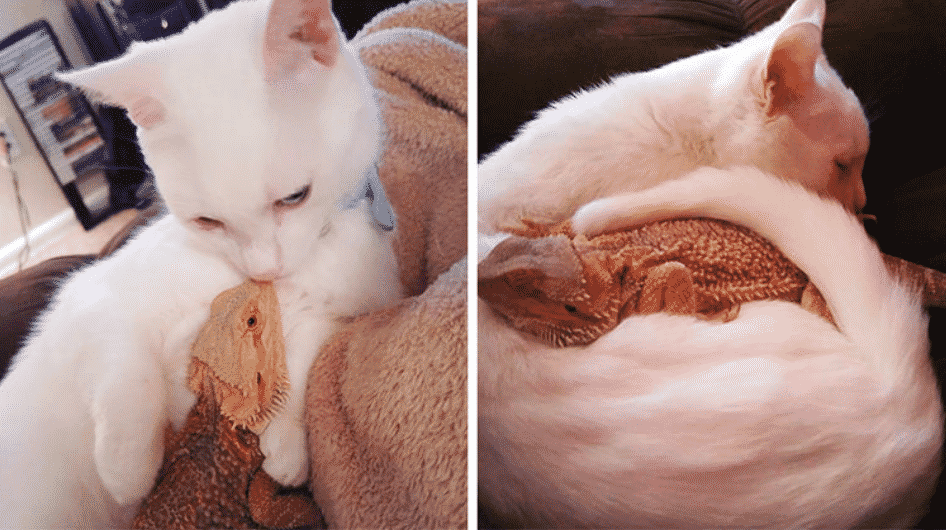 Their friendship has a very interesting start. It all began when Cheyenne and Isaac March of Virginia Beach, Virginia decided to get married. Both of them had their own pet that they were bringing into the marriage. 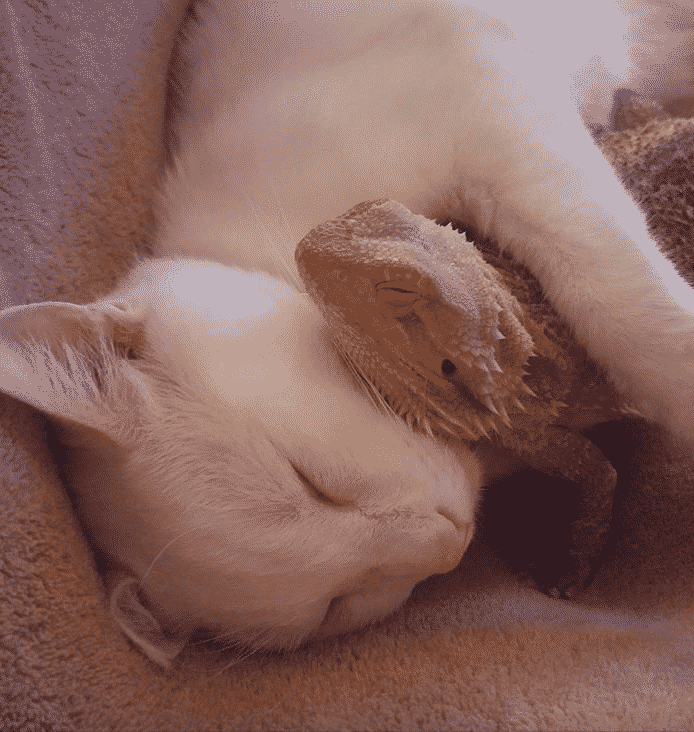 It was a merging of families that brought these two unlikely pals together. In the very beginning, the couple was pretty worried about how each of them would get along. After all, who had ever seen a friendship like this before? 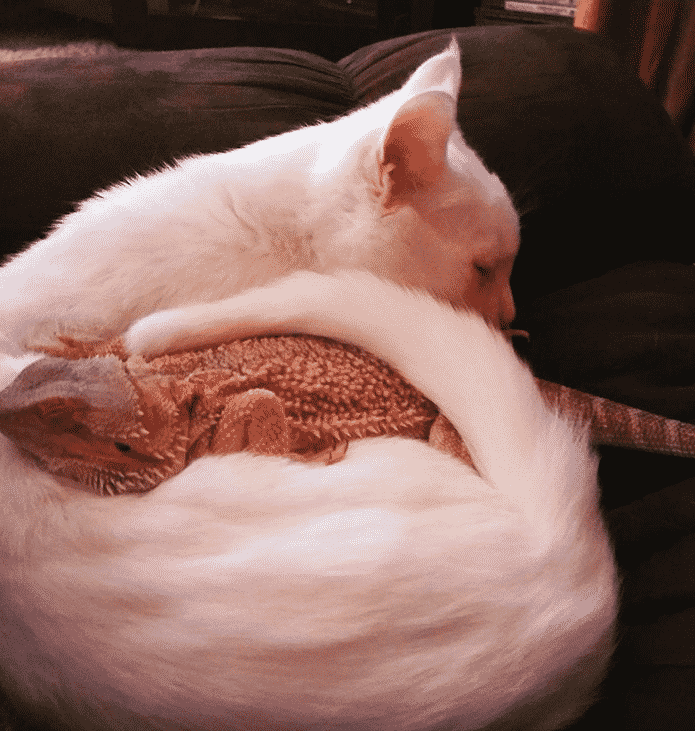 Felines especially enjoy hunting down smaller prey. This includes rodents and lizards. So the couple was worried that Baby might see Charles as a midnight snack and not as an equal… 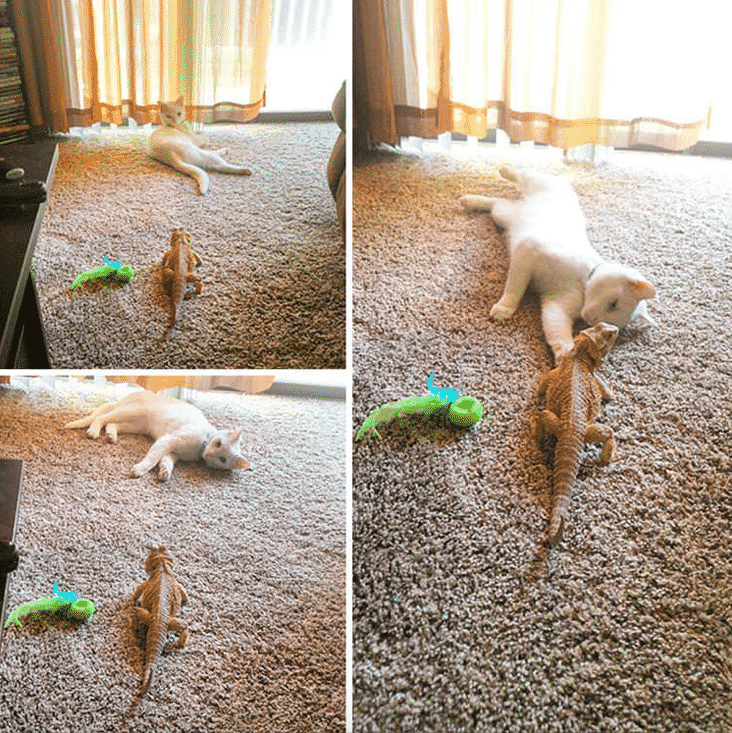 The pair was finally introduced to each other on February 19. The couple anxiously watched as the two of them looked at each other. That was when they saw everything they needed to know about the situation. 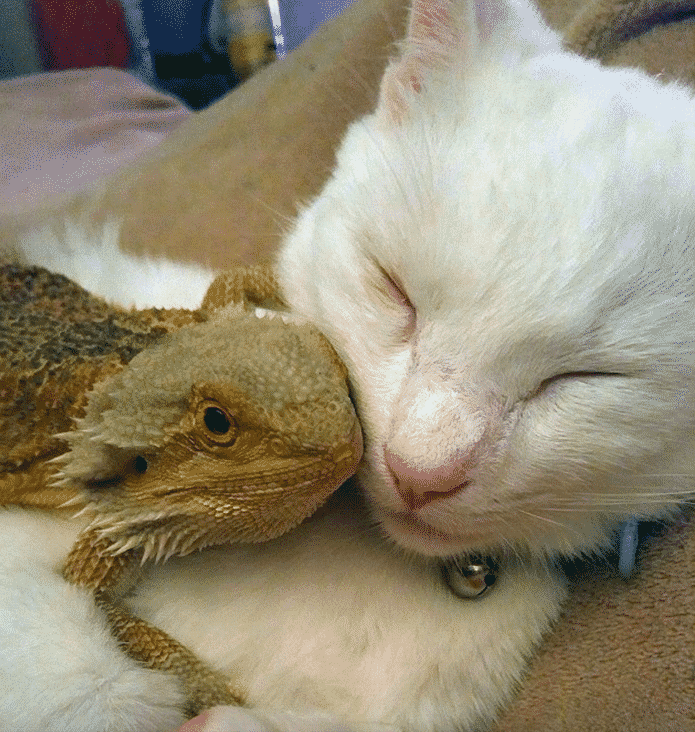 Cheyenne immediately knew that the situation was under control when she saw Baby’s reaction. “I knew Baby would not hurt Charles when he went right up to her, sniffed and rubbed up against her,” Cheyenne told The Huffington Post. 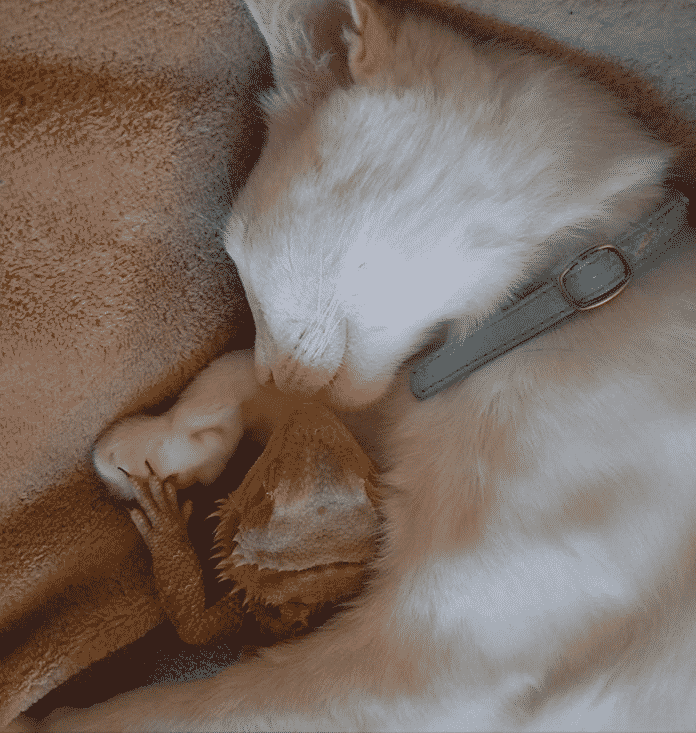 Now that they figured out how Baby felt about Charles it was time to figure out the opposite. From their very first meeting Charles was absolutely in love with Baby. This was obviously a match made in heaven! 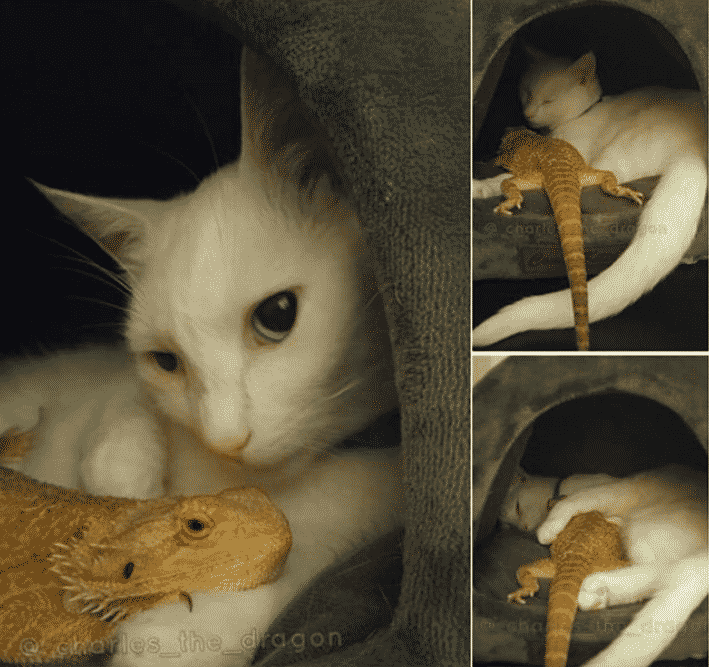 When Charles first met Baby he immediately went in for a cuddle. Now, their entire friendship is solely based on cuddles. These two can’t get enough hugs from one another. 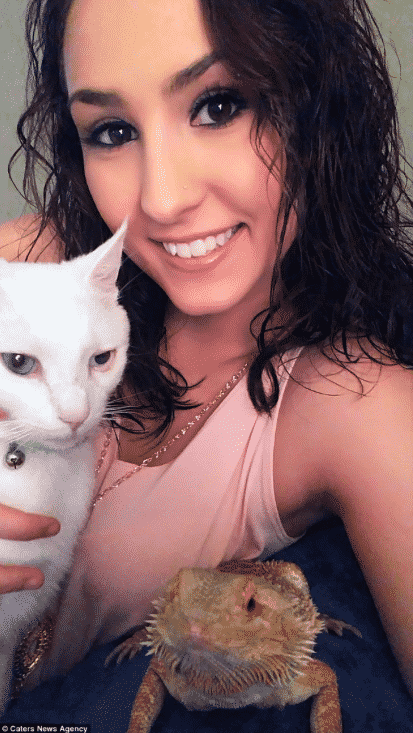 “One day I had Baby on my lap and Charles on my chest. Charles was looking to keep warm because she is a reptile, and crawled down to my lap to cuddle with Baby. Baby loved it and cuddled back even holding her and rubbing his face against hers,” Cheyenne said. 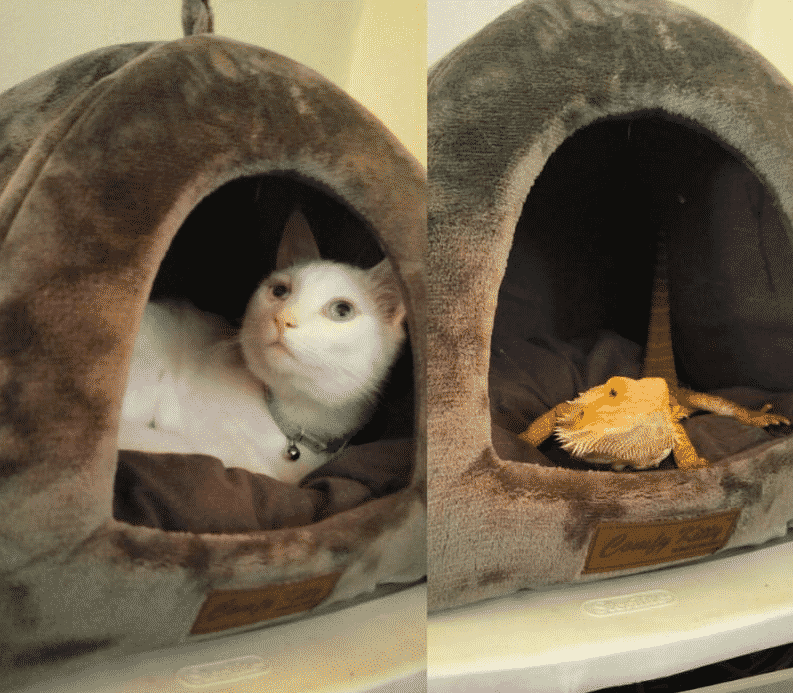 These days, it’s almost impossible to separate Charles and Baby. This duo is always together and they love doing everything together. They are truly the best of friends. Snuggling isn’t their only shared activity after all… 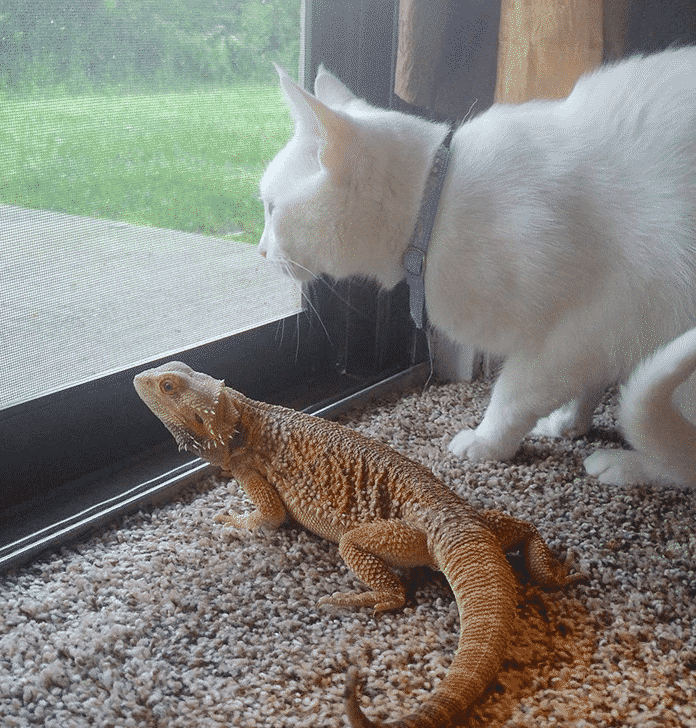 Outside of cuddling, this pair loves getting involved in other shenanigans. They love to bird watch from the windows in their home and they also enjoy looking out for postal workers. It’s all part of an active day for this pair! 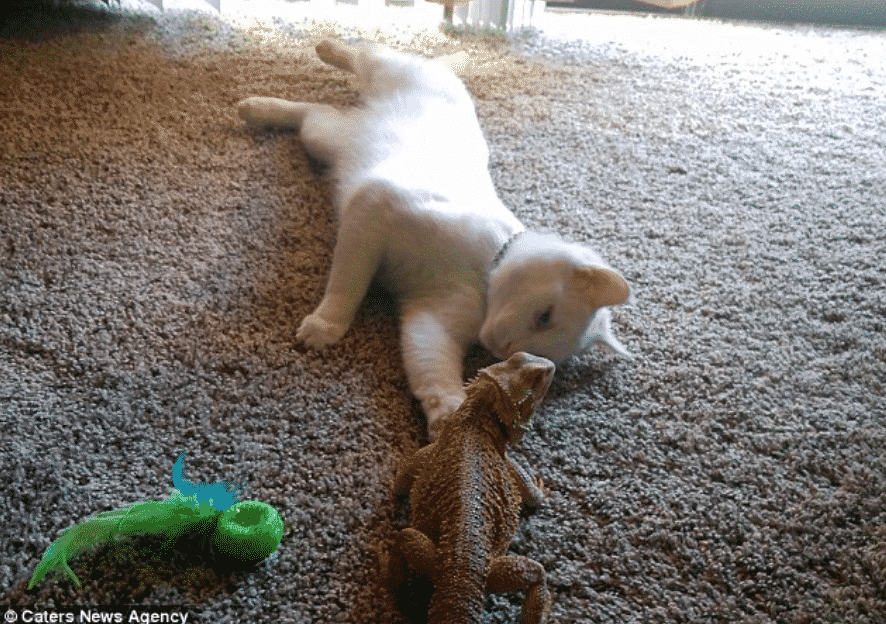 The friends are also there for each other during scary times. Baby is super scared of thunderstorms so whenever one is around, Charles quickly comes by for a snuggle. This helps keep Baby calm during a storm. 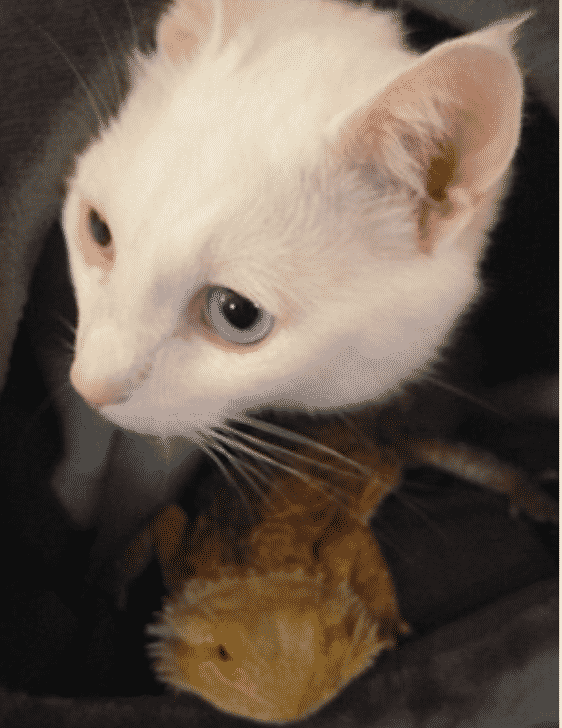 The two of them seem to have a calming effect on each other. Anytime one of them is stressed all it takes is a nice snuggle to get through it. So do the couple ever worry about leaving the pair alone at home? 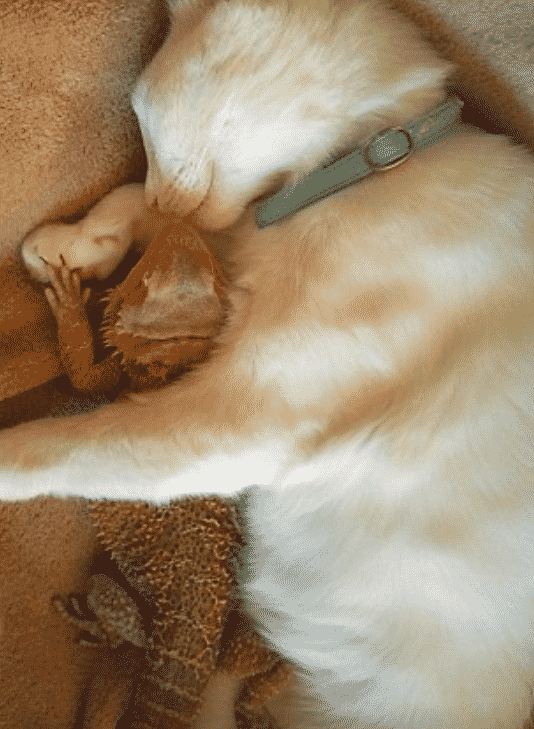 Charles and Baby’s parents have absolutely no worries about leaving them alone together. They know that Baby would never hurt his best friend. Since their friendship is so unique their parent’s decided to share it with the world! 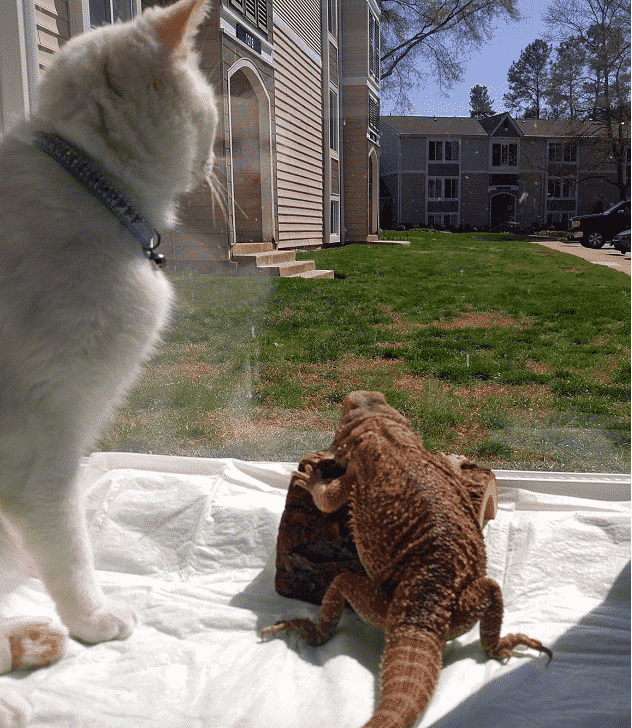 No one would believe that a reptile would be so cuddly without seeing it for themselves. So the couple decided to create an Instagram account dedicated to Charles and Baby’s friendship. Everyone now sees just how cuddly this duo is with their own eyes! 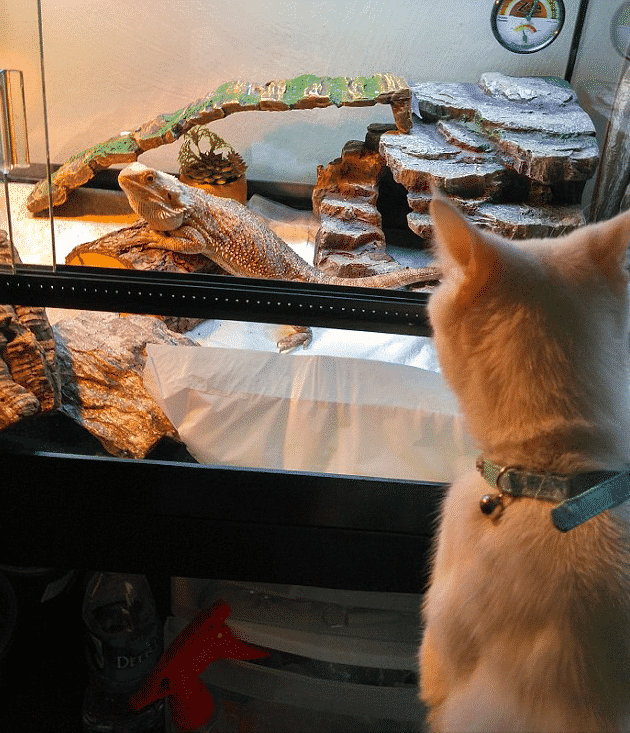 Despite seeing it with their own eyes, people on social media still have such a hard time believing that the friendship is real. However, everyone in the comments agree that siblings are siblings no matter what species they are. 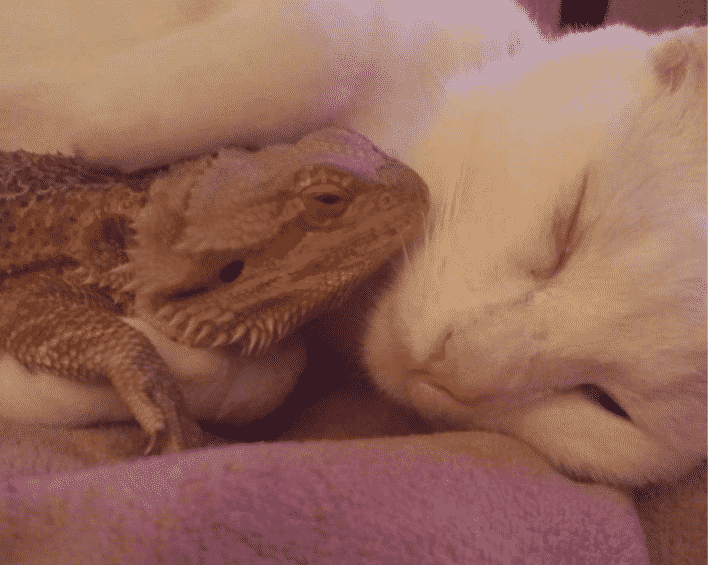 Baby has shown that he is a great brother to Charles as well on more than one occasion. Once, when Charles took over his bed, Baby slept in a box so that he wouldn’t disturb his sister. Talk about a true gentleman. 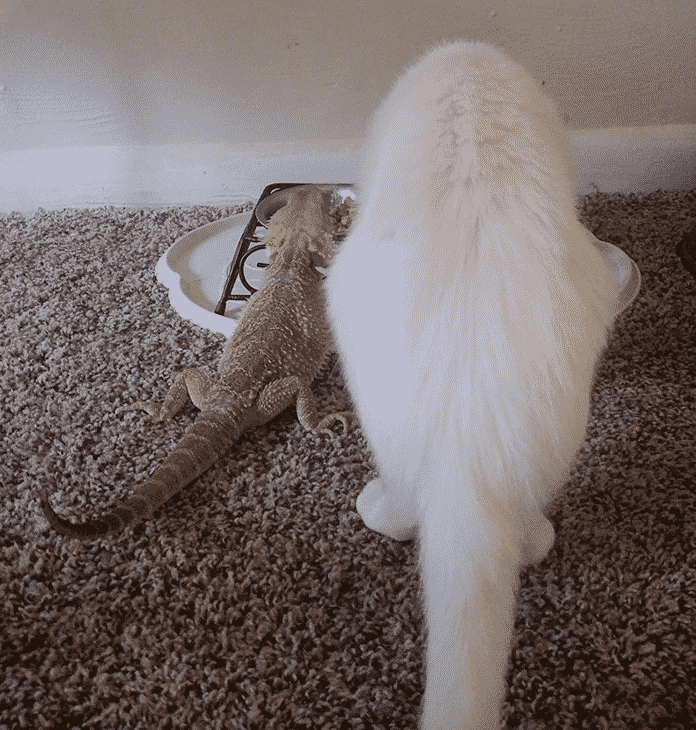 This duo also loves to have their meals side by side. A meal just wouldn’t be complete without each other there for emotional support. Even though Baby definitely gobbles up his food faster than Charles. 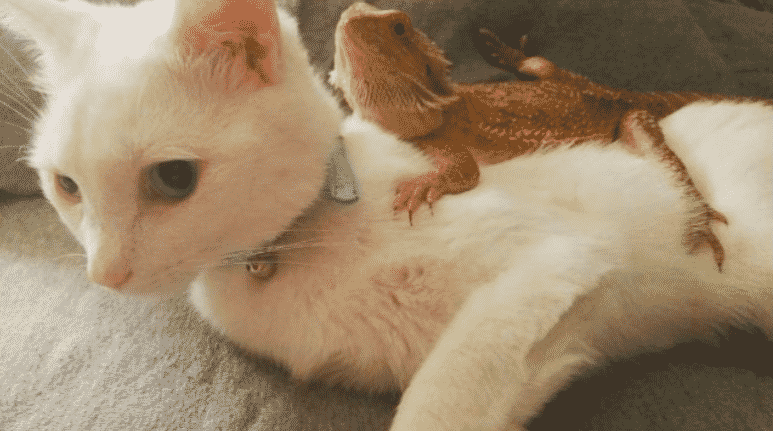 The friendship shared between Charles and Baby is truly amazing. It isn’t often that you see such different species of animals getting along on such a close level. However, these two have truly broken down barriers. 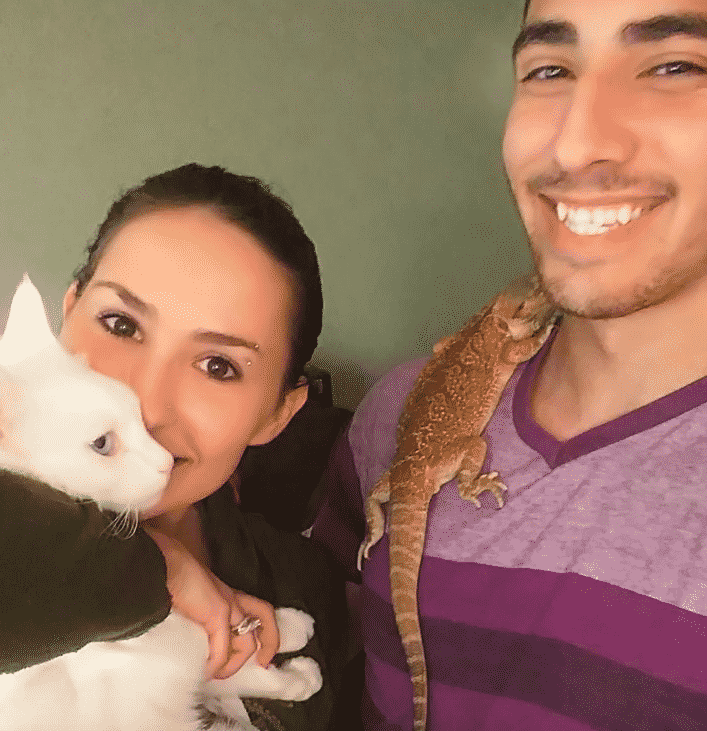 All together, these four create a perfect family. They all greatly enjoy each other’s company! Cheyenne and Isaac are incredibly happy to see their two very different pets getting along so perfectly.