20 Animals That Are Way Bigger Than You Thought

We’re about to show you some of the biggest animals on the planet! 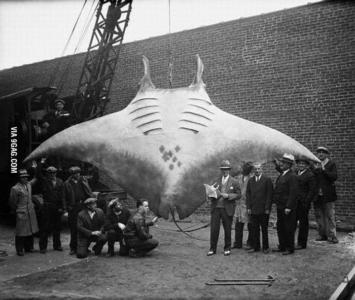 Coming in at #25 is a 1600 kg world traveller. The giant oceanic manta ray is known for swimming long distances across the globe, but prefers to spend time in warm, shallow tropical waters. Watch out next time you’re at the beach! If you feel something moving under foot, it may just be a ray lounging in the warm shallows. 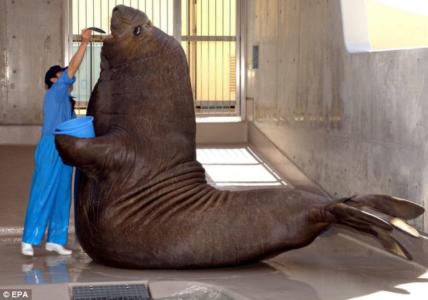 If you’re not sure exactly why this seal is called the elephant seal, it could have something to do with the fact that it can weigh up to 3000 kg or as much as a small elephant! It also sort of looks like an elephant too! This animal loves the water and spends nearly 80% of it’s time swimming and 20% of it’s time hanging out on the beach. Not a bad life!

This next animal almost broke world records for being the biggest of its species! 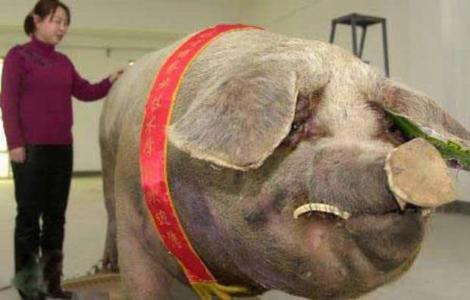 This not so little piggy almost set a world record for being the biggest pig ever. A giant pig if you will! Weighing in at 900 kg, he was just 200 kg’s short of beating the record holder who was an 1100 kg hog named Big Bill. That’s a lot of bacon! 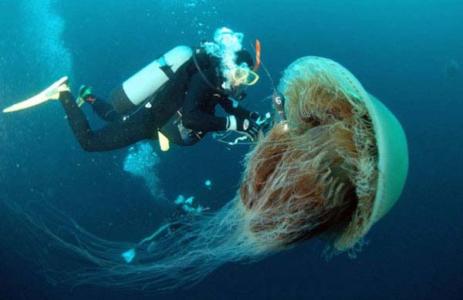 The Nomura Jellyfish weighs in at around 200 kg and can measure up to over 6 feet in diameter. That’s taller than the average man! Imagine scuba diving and seeing this guy float up next to you. Don’t get stung by this jellyfish though, because a sting of this magnitude could be lethal! 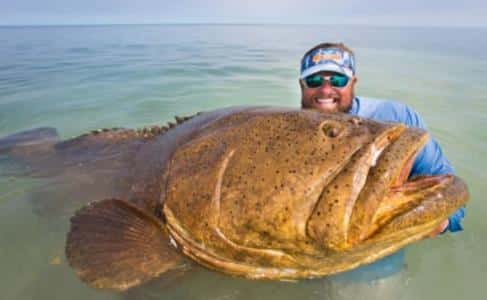 This is a face only a mother could love! This fish is nothing pretty to look at but sport fisherman dream of catching such a fish. They can reach up to eight feet in length and weigh up to 400 kg. Fish and chips anyone?

This next supersized sea creature will have you baffled. Is it a fish, an eel, or a giant water snake??? 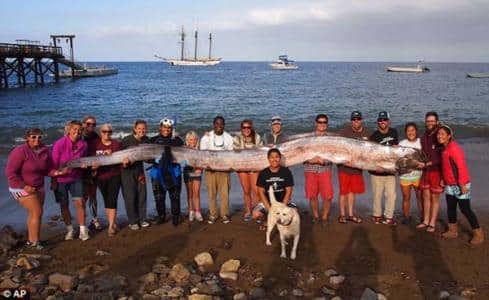 You would probably agree that the oarfish doesn’t look much like a fish, but more like a giant eel. The oarfish is a family member of the lampriform fish species which is one of the longest bony fishes in the ocean, ranging from 35-55 feet in length and weighing upwards of 250 kg. It credits its name to the fact that it rows its body to glide through the water, like an oar. 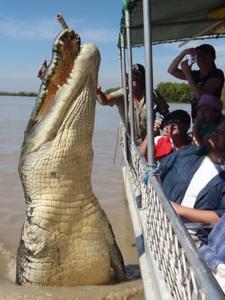 The saltwater crocodile is the largest reptile in the world and also one of the biggest predators that likes to hang around rivers and streams. An adult male can reach up to 20 feet in length and weight up to 1200 kg. If you were afraid of the crocodile from Peter Pan, you were right to be. These crocs are goliaths and I’m willing to guess they eat more than clocks.

Speaking of being afraid, if you don’t like spiders this next creature may not be your cup of tea. Click next if you dare! 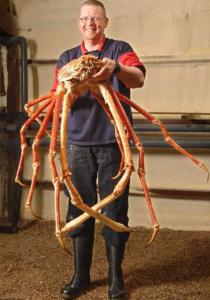 If you enjoy seafood, eat your heart out! These crab legs are the largest in the world. The Japanese Spider Crab has the largest leg span of any crab species known. Get this: their legs span up to 18 feet from claw to claw! 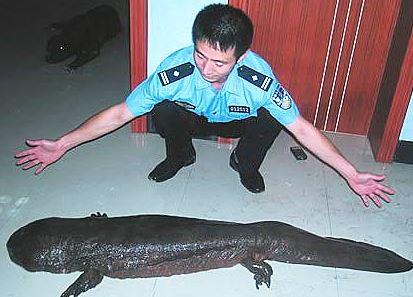 You probably won’t find this guy hiding beneath a rock. In fact, you will probably have a very difficult time finding one at all. This salamander has seen its population decrease by nearly 80% since the 1950’s. It was once considered a delicacy in Chinese cuisine, but the salamander is now protected under Chinese Law. The Giant Chinese Salamander is the largest amphibian in the world, measuring up to 6 feet in length. 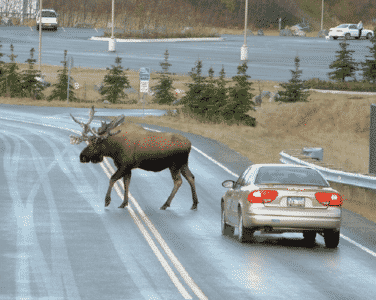 If you ever watched the adventures of Rocky and Bullwinkle as a kid, you may have some preconceived ideas about moose. Don’t be fooled! Not all moose are as friendly as Bullwinkle and they sure don’t have flying squirrel friends. Moose are massive animals who can be very aggressive, especially if their young are nearby. They have been known to attack humans and even charge at vehicles on the road. 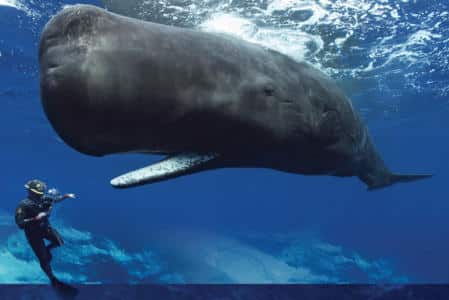 The Sperm Whale is the largest toothed whale in the ocean. Females and young whales will travel together is small pods while adult males prefer to be independent and travel alone. An adult male sperm whale can reach up to 67 feet in length and plunge to depths of over 7300 feet. These whales are so big that they have virtually no real predators. However, pods of orca whales have been known to go after young sperm whales.

This next creature takes 6 human adults to hold onto. Can you take a guess as to what it is? 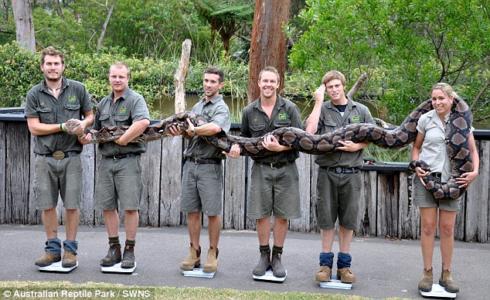 Not a fan of snakes??? After seeing the size of this one, how could anyone be? Normally pythons live in places like Africa and Asia, but more recently they have been introduced to the southern American States and have become an invasive species in the Florida Everglades. An adult python can weigh up to 20 kg and reach lengths up to 7 feet. They will easily take down large animals and have been known to kill adult humans. You may just want to reconsider Spring Break vacation plans in Florida next year, just saying.

8. Lions and Tigers and Bears, Oh My! 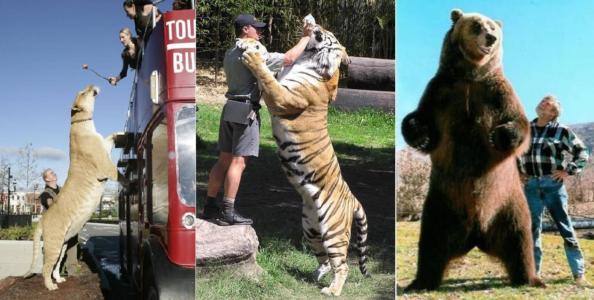 Who doesn’t love giant cats and snuggly teddy bears? Well maybe they wouldn’t be so big and bad if they didn’t have such long menacing claws and teeth. All three of these species are enormous and it can be easy to forget just how big they are until you see them standing next to a human.

Have you ever seen a giant bird chasing a man? You’re about to!: 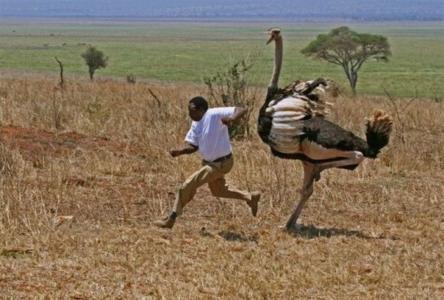 The Ostrich is the largest flightless bird in the world normally residing in Africa. Although they can’t fly, that doesn’t stop them from getting around quickly. Ostrich have extremely long and muscular legs which allow them to run at great speeds. They can run up to speeds of 43 miles per hour! If spooked, you’d imagine they would just run away at super speeds, but these birds are known for being big chickens. When scared they normally lay flat on the ground or bury their head in the ground. But be warned! Some have been known to kick with their powerful legs if they’re feeling feisty!

This next big mammal is feeling rather feisty too. It looks like he may have a case of road rage… 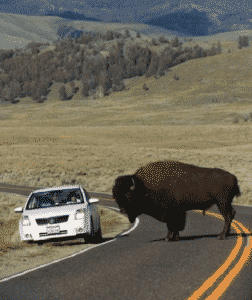 The American Buffalo, otherwise known as the American Bison resides mainly in North America where it can be found roaming the plains and grasslands in heards. It is a relative to the cow family however doubles it in size and weight. Typically cows will weigh in at about 450-500 kg whereas an adult buffalo can weigh up to 1000 kg. That’s literally the size of a car! 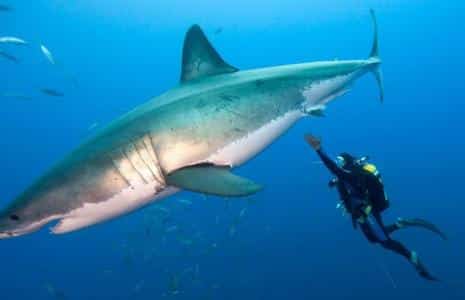 It’s no surprise that this big toothed fish made the list! The Great White is at the top of the food chain in the ocean world. And did you know that female adults are larger than adult males? On average they weight in at 1900 kg and can reach up to 20 feet in length while their male counterpart only normally reaches up to 15 feet in length. 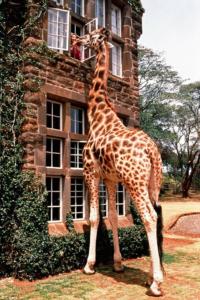 This seems like a no brainer! It’s no wonder the giraffe has made the list as it stands up to 19 feet tall! The giraffe is the tallest living terrestrial mammal alive in the world. Can you believe that the giraffe is actually an ancestor of the deer? Only giraffes have the characteristic elongated neck though. 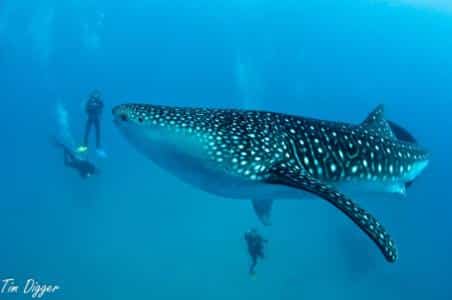 Known as the biggest known shark in the world, the majestic whale shark stretches up to 42 feet in length and is said to weigh up to 21.5 tonnes! Unlike other species of shark, this is one gentle giant. The whale shark is a slow moving plankton eating shark that poses no threat to humans or other fish in the ocean. They’re nothing like their fierce Great White cousins! 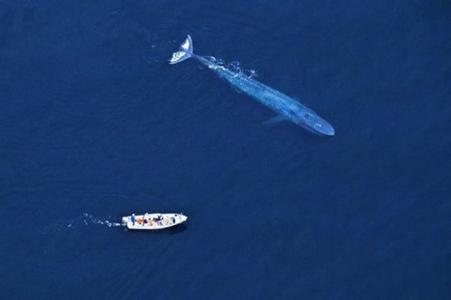 Speaking of gentle giants, the blue whale is the largest known mammal on earth reaching 100 feet in length and weighing in at a record weight of 181 tonnes. Like the whale shark, the blue whale poses no real threat as a predator. It feeds on a diet of krill and crustaceans. The real threat surrounding blue whales has been human interactions. In the early 2000’s the blue whale population hit an all time low, reaching 5000-12,000 blue whales globally. Whale hunting was largely to blame for their population plunging. However, numbers have since rebounded and are now hovering between 10,000-25,000 globally. 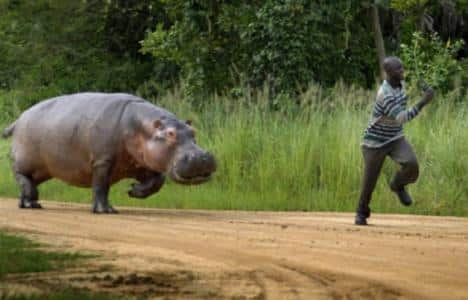 Aside from the elephant and rhinoceros, the hippo is the third-largest land mammal on earth. Hippos can weigh up to 1500 kg and although they have very short and stocky legs, they can actually run very fast! Can you believe these guys can reach speeds of 19 miles per hour on such little legs?! You better watch out if you’re ever on Safari. Apparently, this guy made the assumption that he could out run an angry hippo!

We hope you’ve come to see these animals in a whole new light. It can be easy to forget just how magnificent in size these creatures really are. The animal kingdom is full of so many wild and wonderful creatures and sometimes we need to just sit back and admire them in all their beauty.