Many animal lovers take under their wings a lot of injured animals or animals in need. They take care of them, and when the animals are ready, they try to find them a forever home so they can live a happy life with people that will love them and keep them safe. However, sometimes it’s hard for many animals to live in the same place with other, but that’s not our case. Two beautiful puppies and their friends prove everyone wrong, and their story will amaze you! Make sure not to miss #19, #16 and #14! 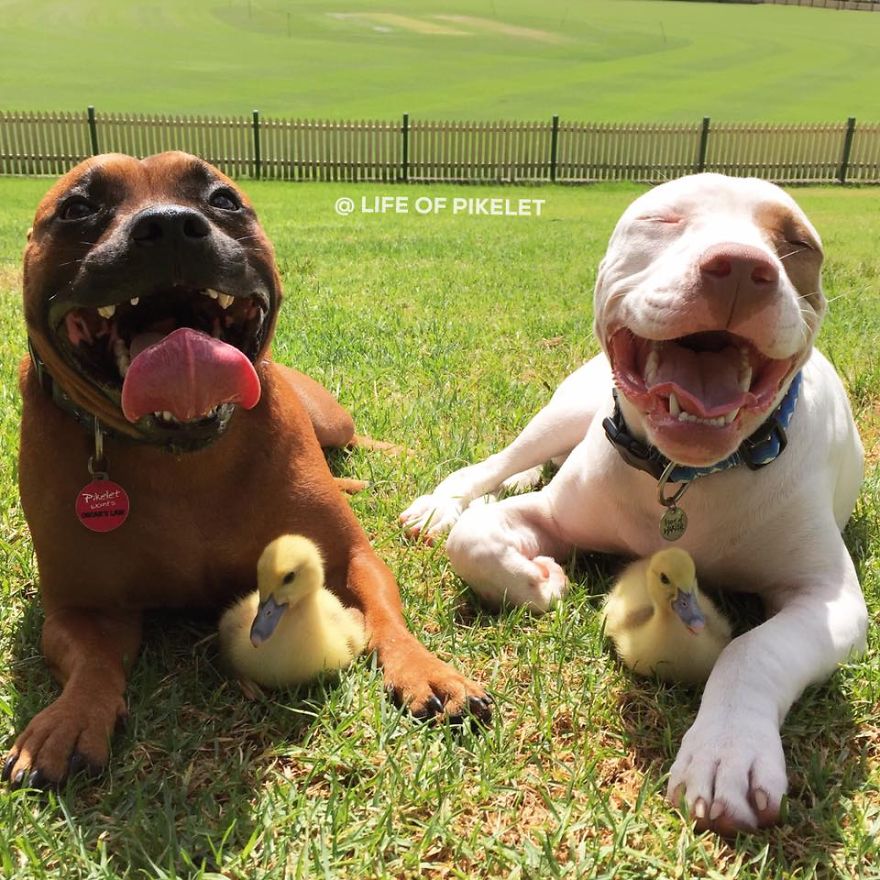 The white dog, which name is Pikelet, was about to be euthanized when it was almost five weeks old. However, he was given a chance to live when Wollongong Animal Rescue Network took him under its wing and decided that he wasn’t a lost cause. Click next to see the dogs and the ducklings having a bath together! 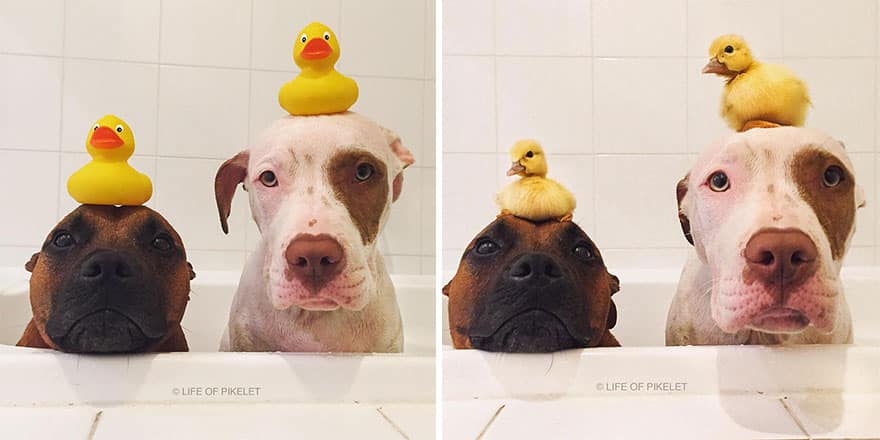 Sometime later, the brown puppy named Patty Cakes joined their family. He was calm and loving, and he really enjoyed spending his time with his best friend, Pikelet. The two of them had a great time together. Do you want to see the puppies sleeping together? Click next! 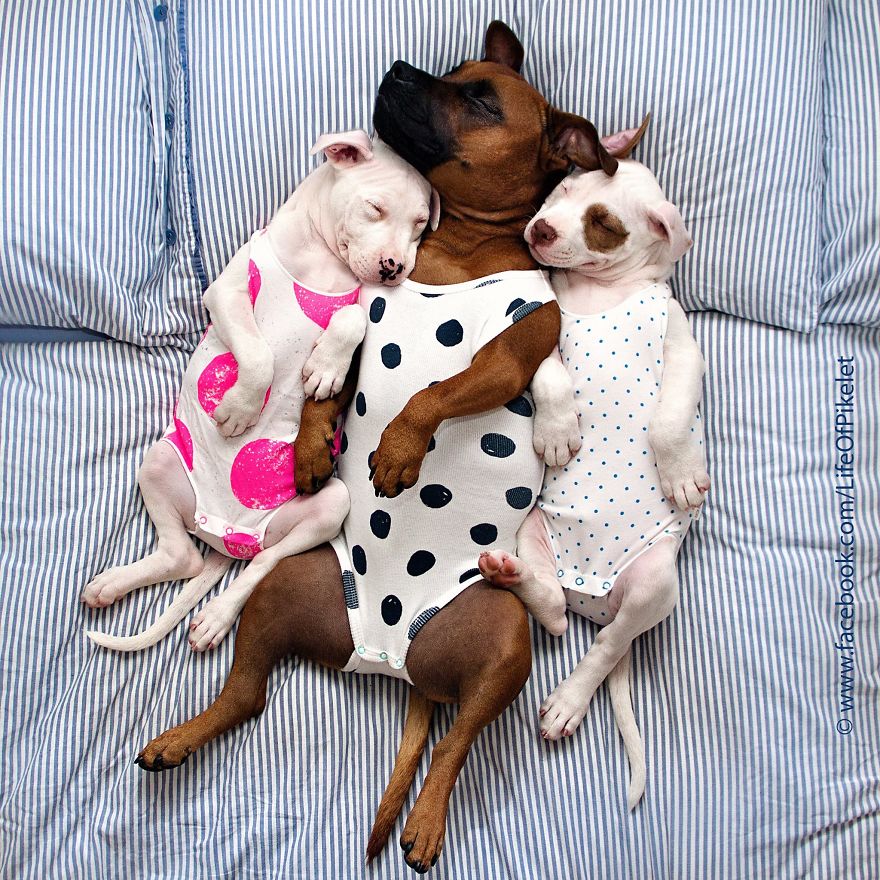 Both Pikelet and Patty Cakes were pretty good at living with other animals, and especially Pikelet was great. He was always exited to meet new puppies and wanted to teach them everything he knew about the dog life. But what would they do if another animal that wasn’t a dog came in their home? Click next to find out! 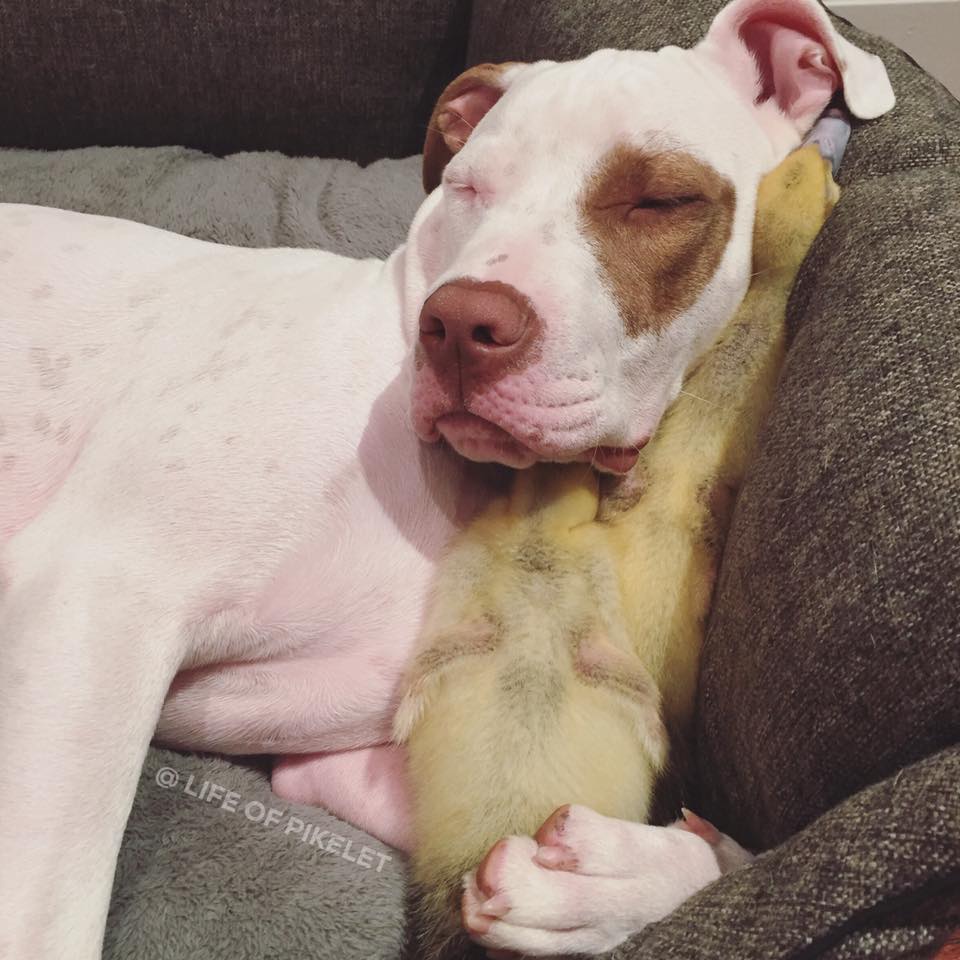 However, when Wollongong Animal Rescue Network had to foster two new animals, they were curious about how other animals would accept them. That was because the new animals were two little ducklings! 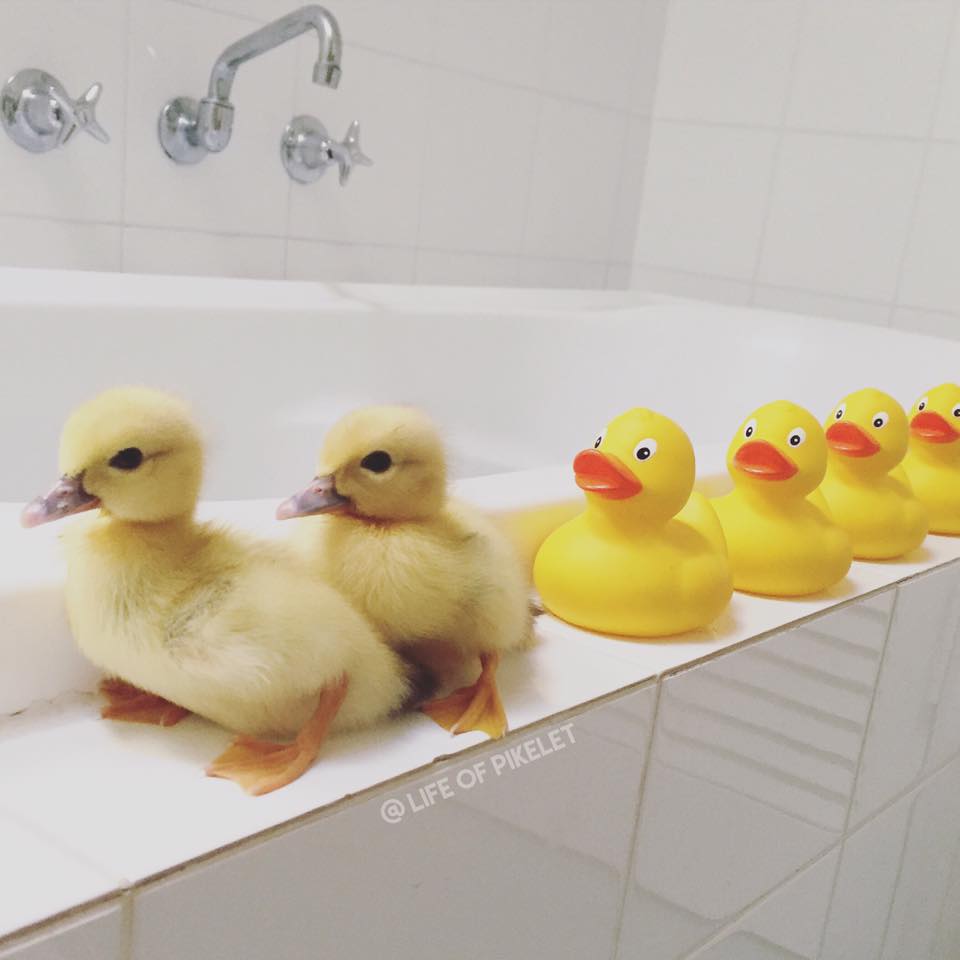 The two adorable ducklings were orphans and needed the help of someone that would take care of them. They were named Penguin and Popinjay, and now they are almost four weeks old. The Wollongong Animal Rescue Network states that these two will be able to be adopted only as a pair. 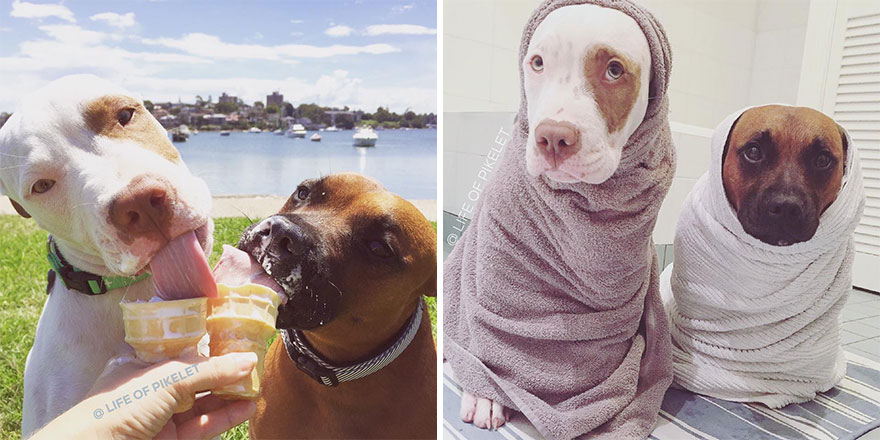 When Pikelet and Patty Cakes met the two adorable ducklings for the first time, they immediately fell in love with them, especially Patty who after their first meeting, he couldn’t stay away from them for a long time! 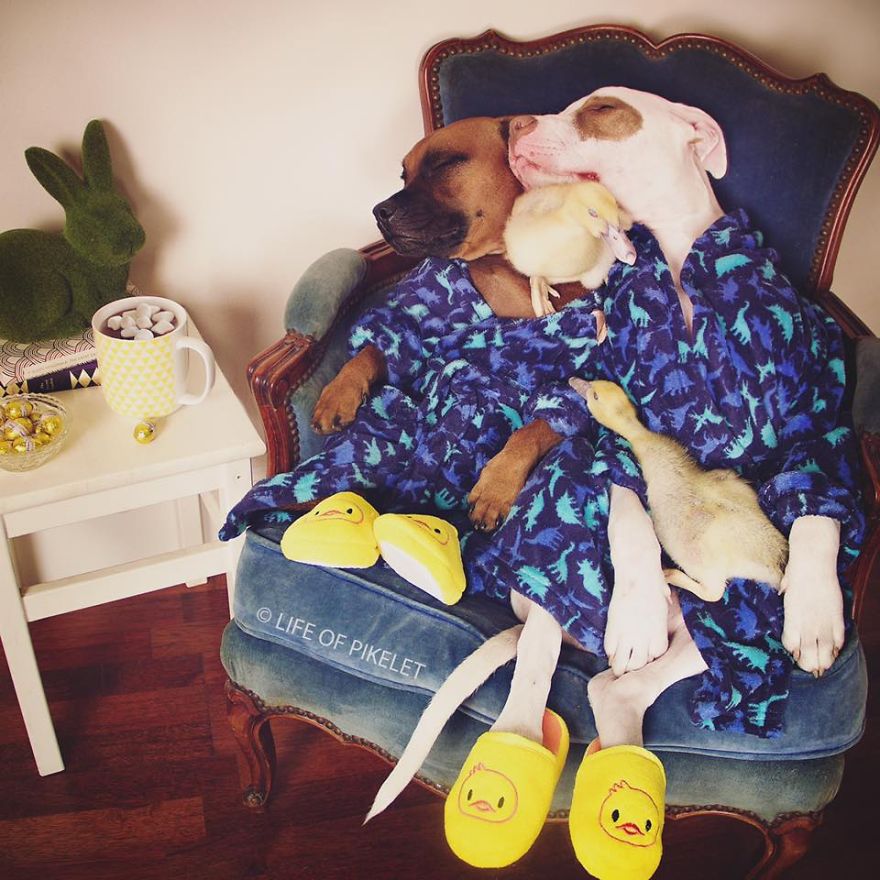 Many people have shown an interest in adopting Penguin and Popinjay and they it seems like that they will find their forever home in about a week. But whoever wants to take the little ducklings needs to be approved by Patty first, who protects and adores them. 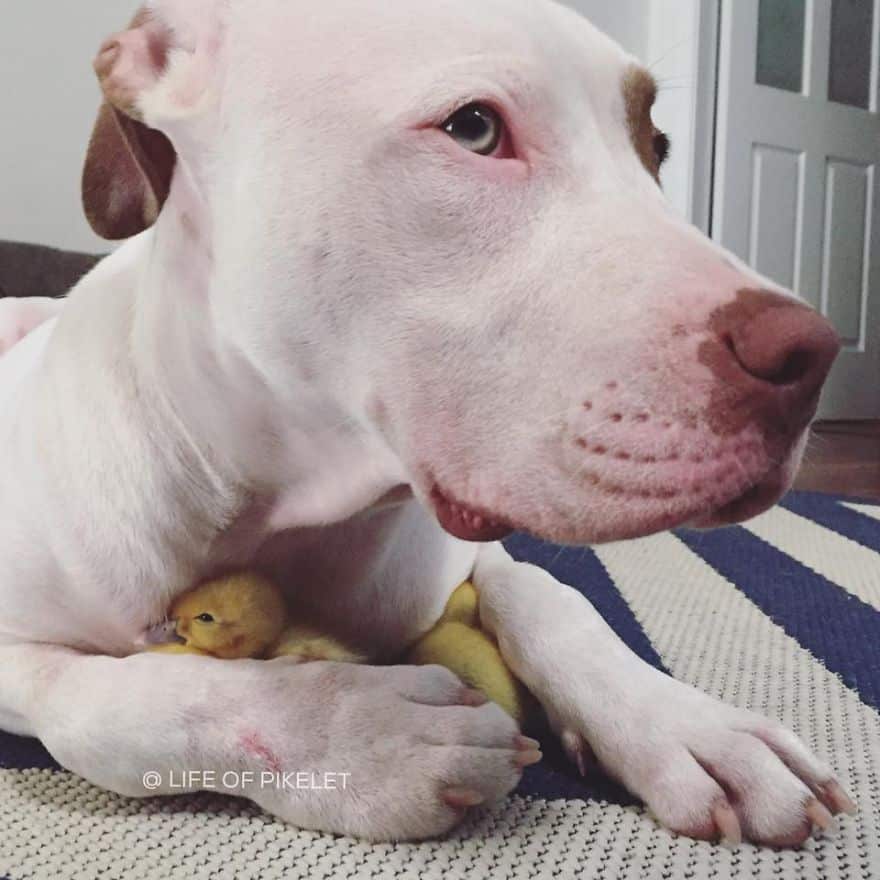 Since day one Patty decided that he will take care of them and protect them at any cost. He became like a mother to them, and the three of them created a powerful bond. 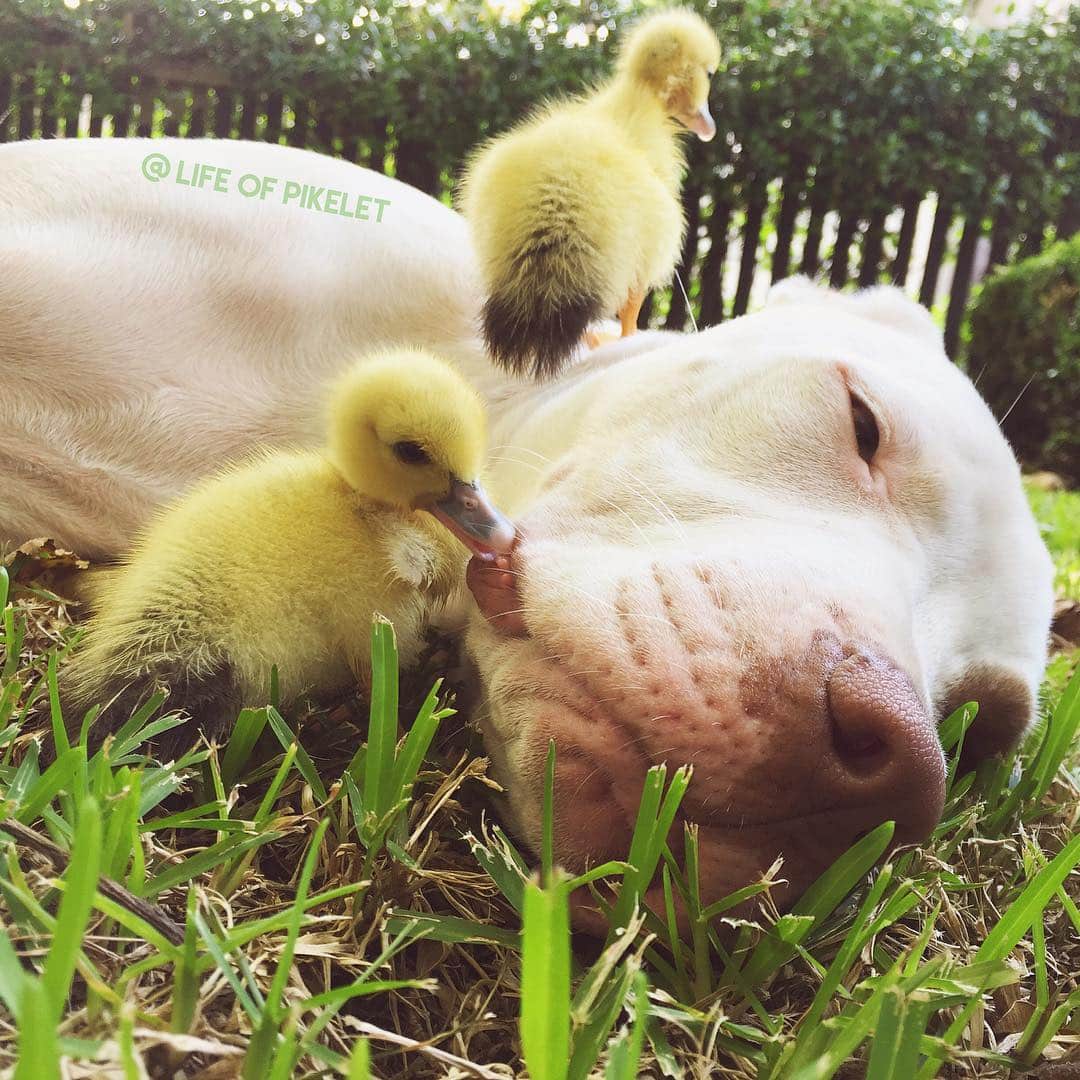 At first, Pikelet wasn’t very excited about living with the two little ducklings, but after some time he couldn’t live without them as well. He liked to play with them in the garden while enjoying a sunny day together. 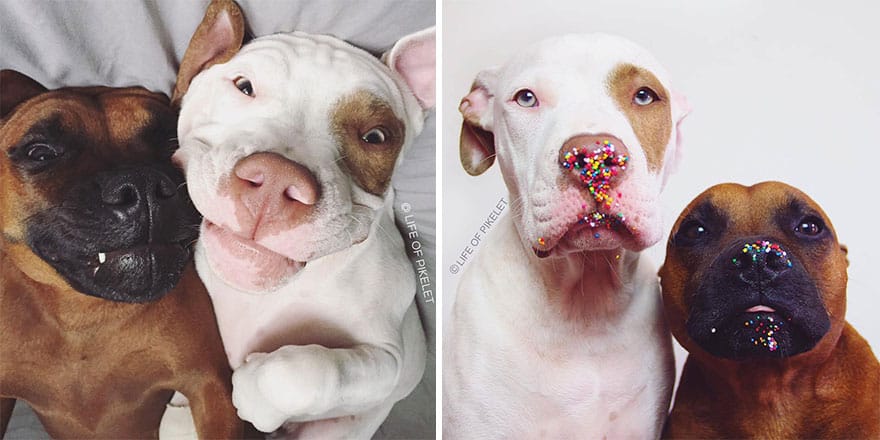 Both Pikelet and Patty fell in love with the two ducklings. Maybe not since day one for Pikelet, but after some time the four of them were spending every minute of their day together, having fun, running around and playing. 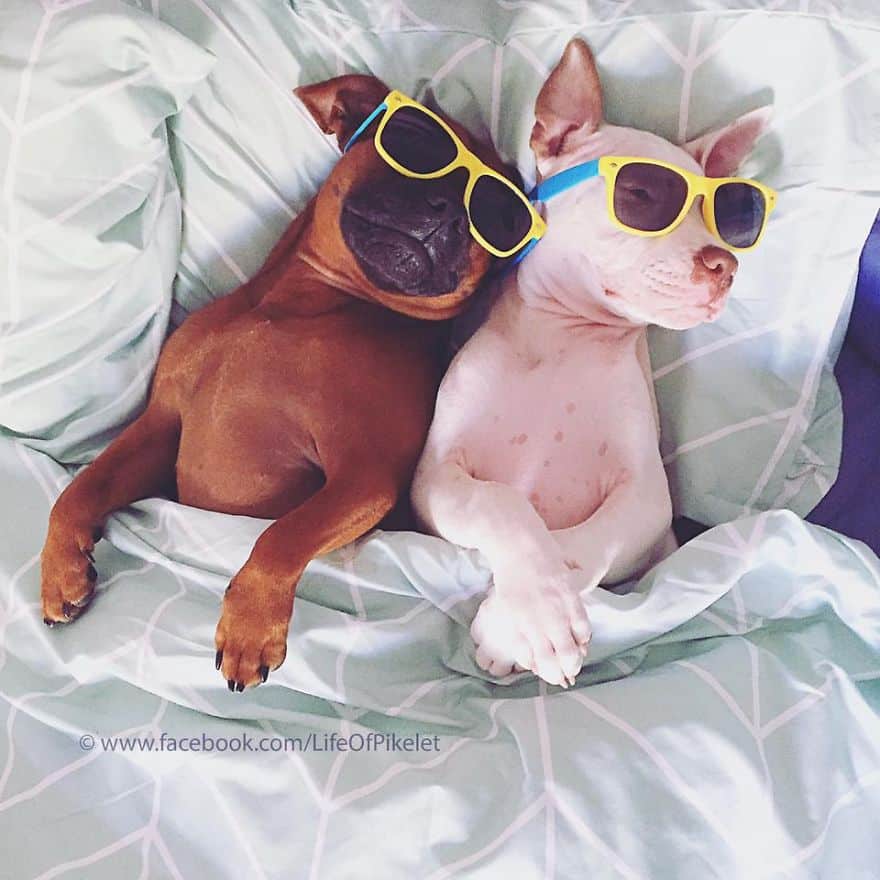 Pikelet and Patty had decided that they had to take care of the two ducklings and they were protective of them as they believed that Penguin and Popinjay was pretty much their responsibility. So they did their best to keep the little duckling safe. 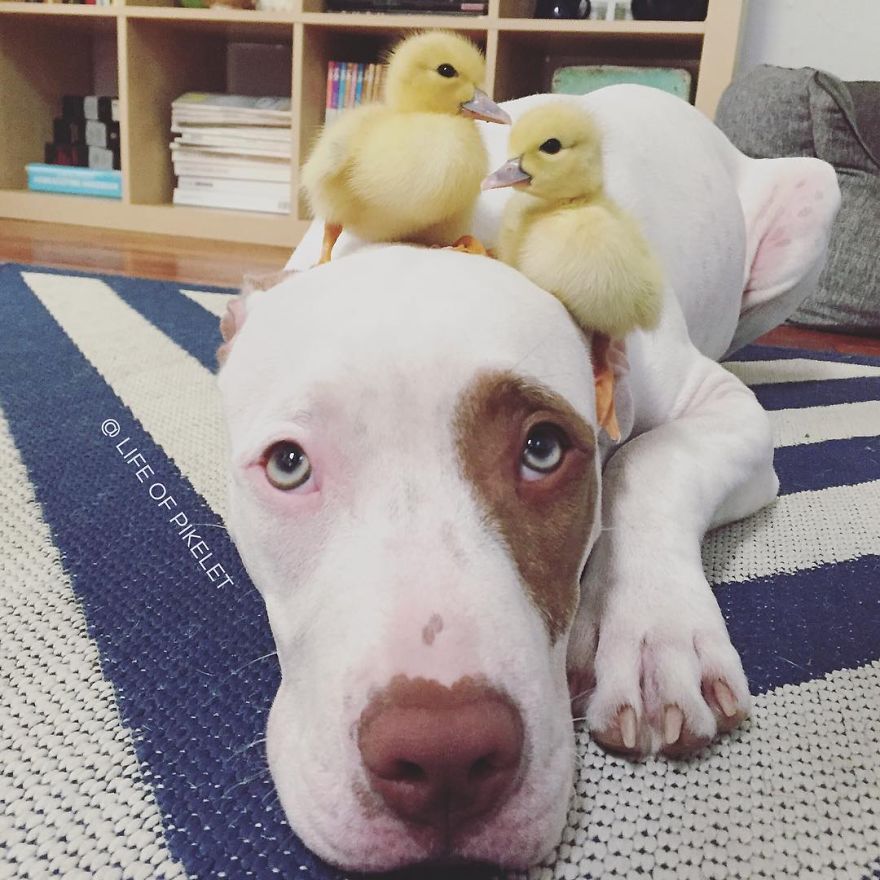 The four of them do everything together. They play, eat sleep and have fun together. Also, when the weather is scorching, they go to a small harbor dog beach. There both the puppies and the ducklings can swim and have fun. 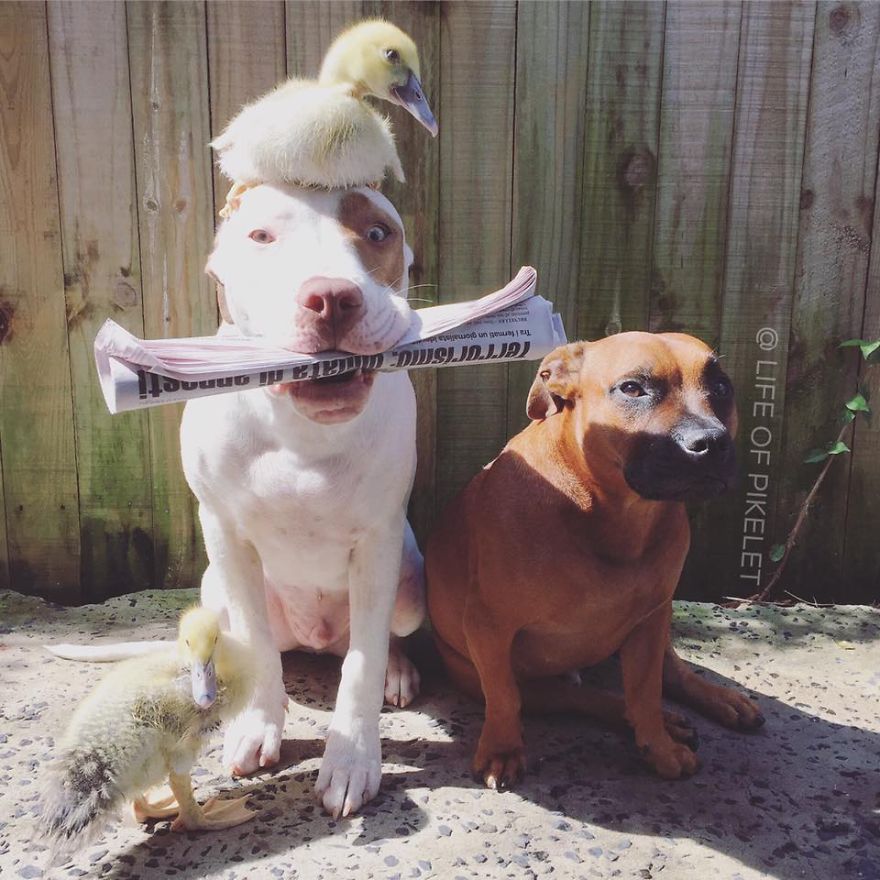 When their story was heard the four friends became famous and started featuring in newspapers, not only in their country but all over the world, too. However, fame didn’t change them at all. They were still inseparable. 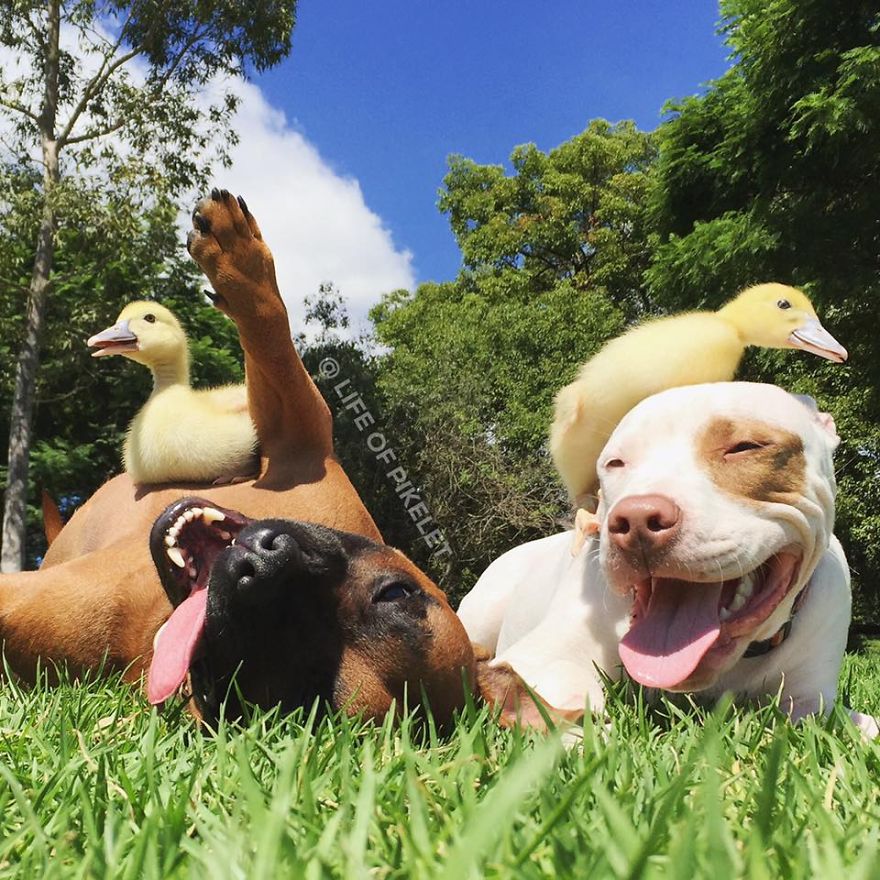 The four of them really enjoy lying on the grass together in a sunny day. They also like to run around and playing while they are outside. Look how happy and playful they look! They are truly adorable! 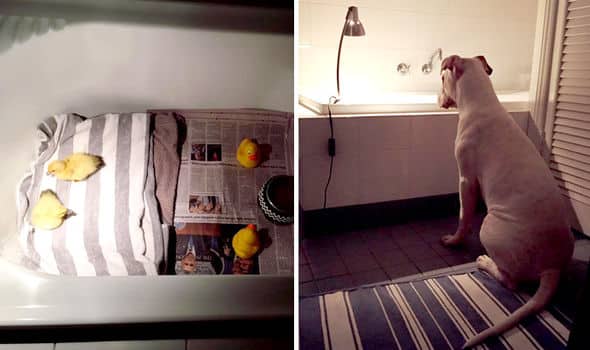 Pikelet was curious all the time about what his little friends were doing. He always wanted to be around them. He tried to protect and take good care of them, so whenever he wasn’t around them, he was anxious. 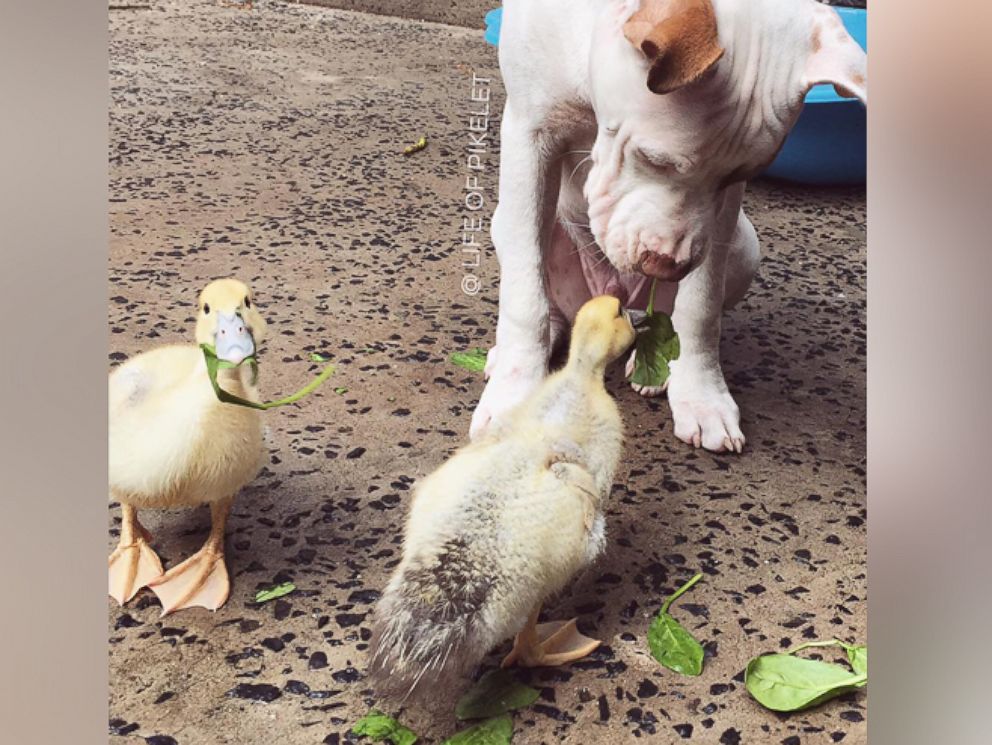 The Ducklings also really like playing fight with Pikelet as she tries to take some of their vegetables and the sight is really adorable and very funny. However, they seem to enjoy their little game really! 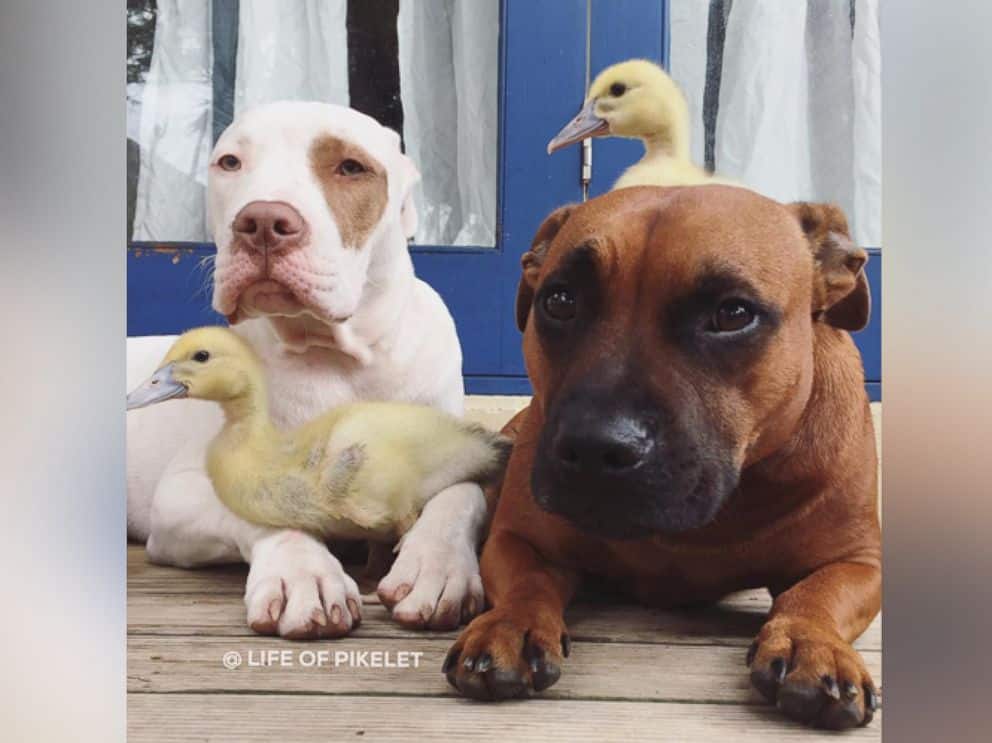 Look how they are sitting together! The little ducks enjoy sitting on their furry friends and just watch everything from above. You will always find them sitting on Pikelet’s and Patty’s backs! 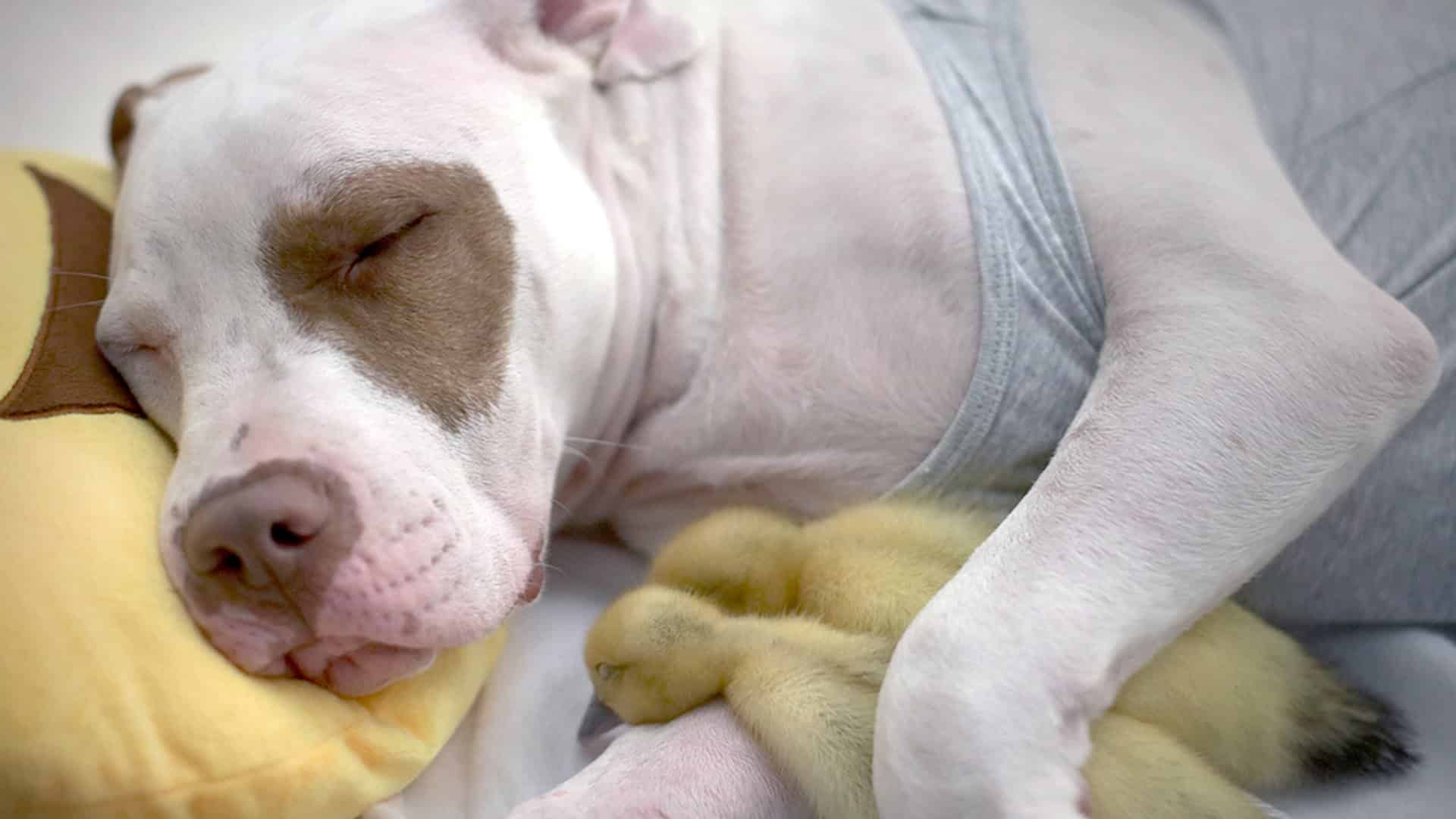 Pikelet really enjoys sleeping with the ducklings and almost every night you will found the little ducks sleeping between Pikelet’s arms. The three of them look really adorable, don’t you think?

2. These Eggs Have Been Hatched! 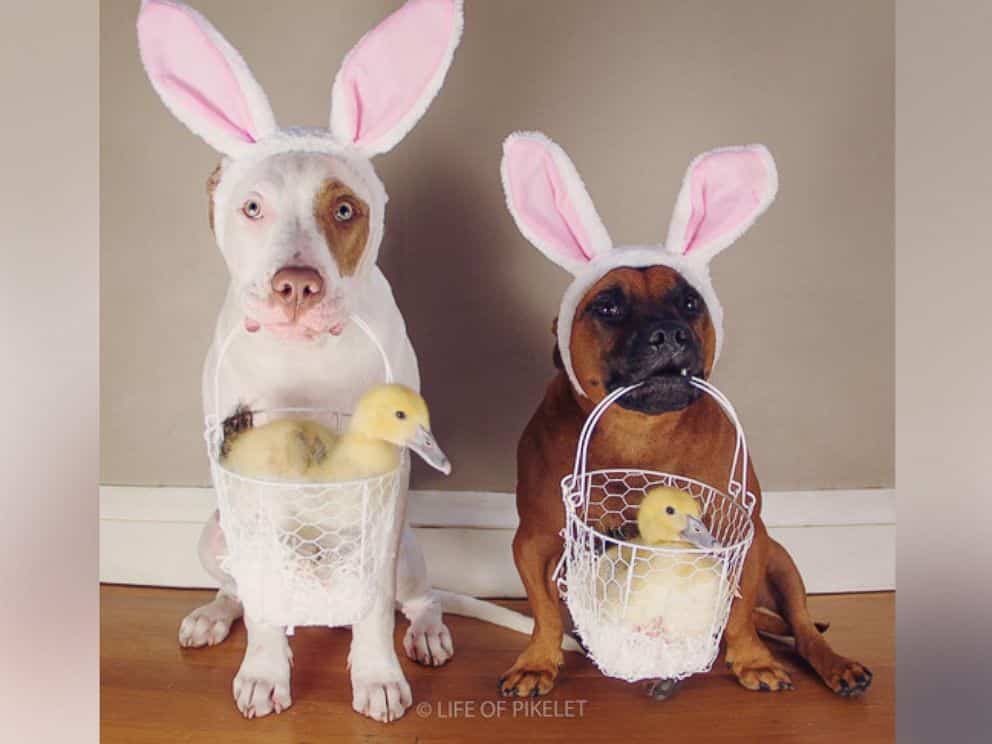 This fantastic team has a lot of fun as they have created a strong bond al together. Maybe their differences are those that keep them close and make them a great team. However, we are sure that they were meant for each other. 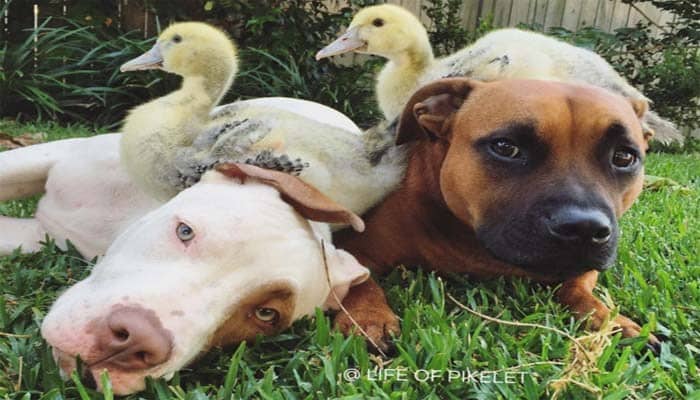 The four of them seem to have a really great time and we are sure that they will still be friends in the future as all of them need each other. They are best friends and they will always be!