This sweet Corgi brought joy to the heart of a stranger in the middle of an airport. As a therapy dog in training, Cora just knew she had to go over to the elderly man and make a difference. When she spotted the man sitting all alone she took it upon herself to see if he was doing all right. The man’s reaction to the dog was priceless and his background story completely shocked Cora’s owner!

Therapy animals have been known to help ease the tension in many humans. Their loving and gentle nature can calm down even the most emotional person. So when this one pup in training approached an elderly man, her owner was really blown away… 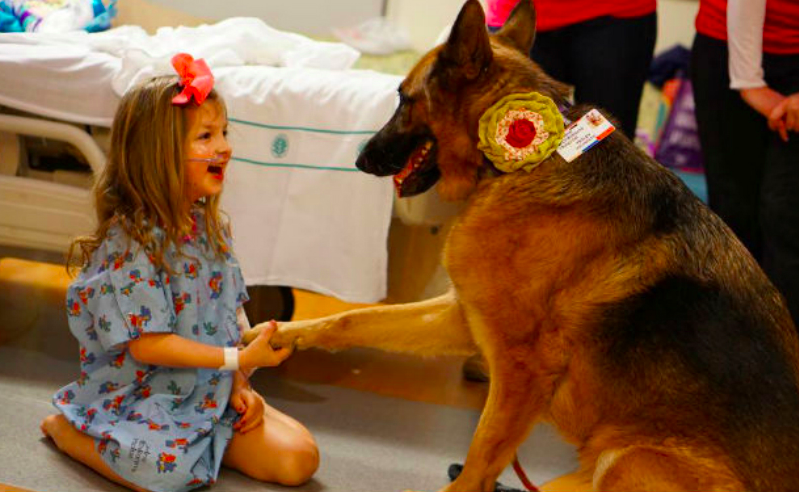 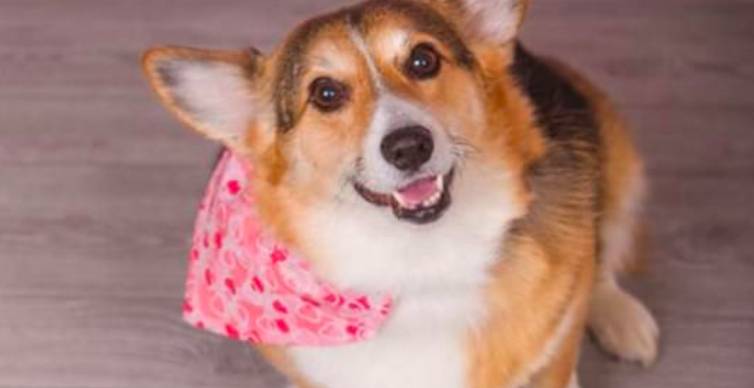 Meet Cora the Corgi, a rescue dog. She was rescued before her 8th birthday and is the mother of a large number of puppies. Before her rescue, she had given birth to tons of puppy litters, so being loving and caring was in her nature. That was when she was discovered by her future foster mom… 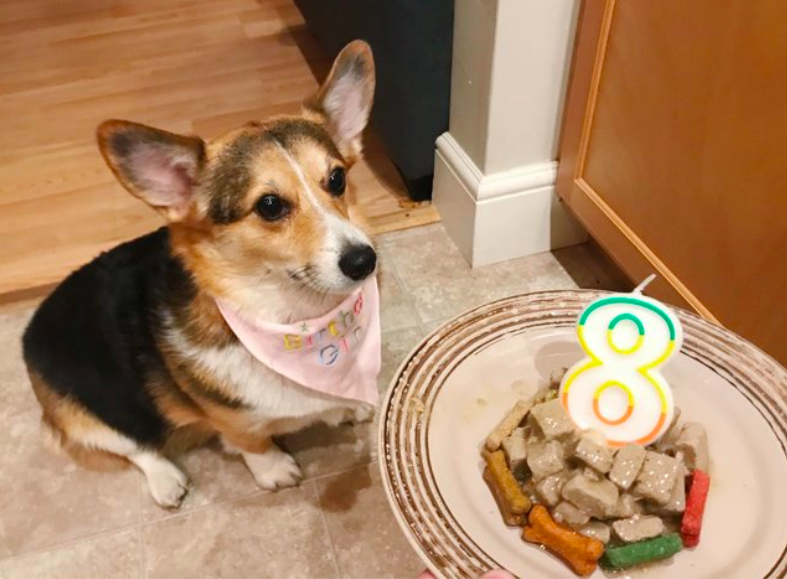 Cora was one of the most smiling and loving dogs that her human mom ever met. That was how she was when her foster mother met her. 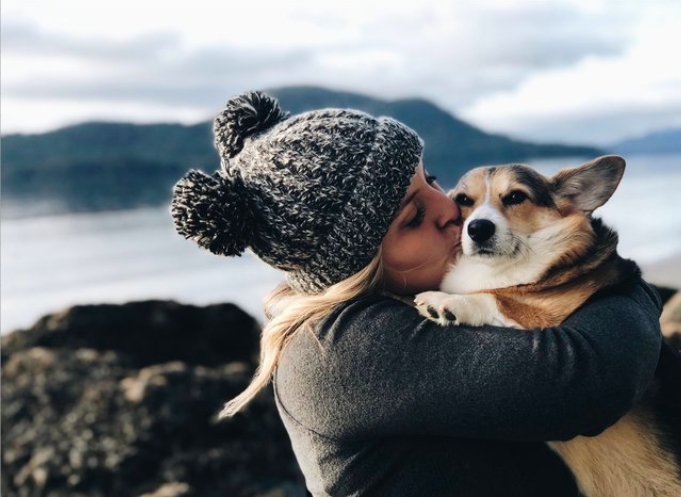 Madison Palm came across Cora and absolutely loved the Corgi. She originally only intended to foster Cora, however, after spending so much time together she couldn’t think of parting ways. The young woman instantly noticed that Cora’s personality made her a perfect candidate for animal-assisted therapy. 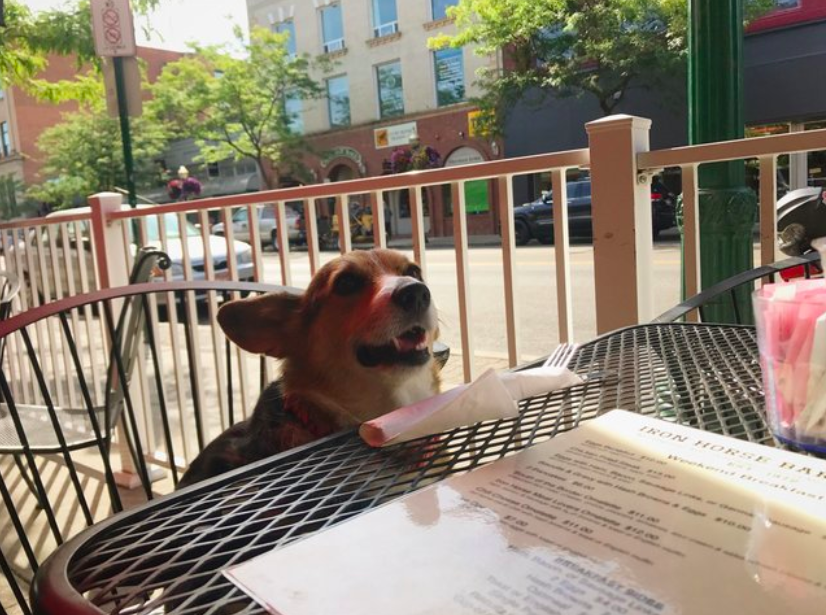 Madison decided to get Cora trained to be a therapy dog. She knew that Cora would be phenomenal at the job. “Cora’s personality is so amazing; she is a lover,” Palm told The Dodo. She eventually signed her up for the training courses but never expected what would end up happening next. 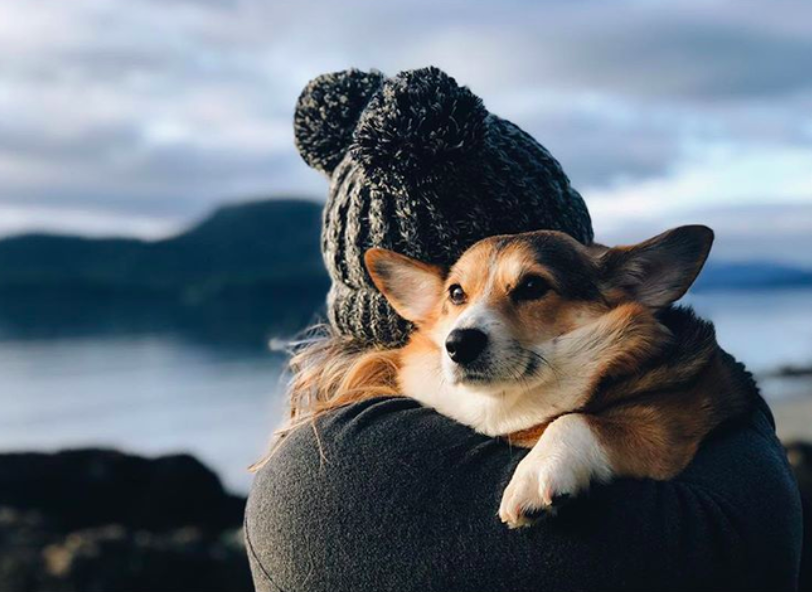 “She is always right next to me and always keeps a close eye if she’s not. If I’m not available she’ll pick the next closest lap to sit on and nudges your hand unless you are petting her at all times. She is SO sweet and that is usually the first thing people say about her. Her gentle and kind nature never goes unnoticed,” Palm said when describing Cora. 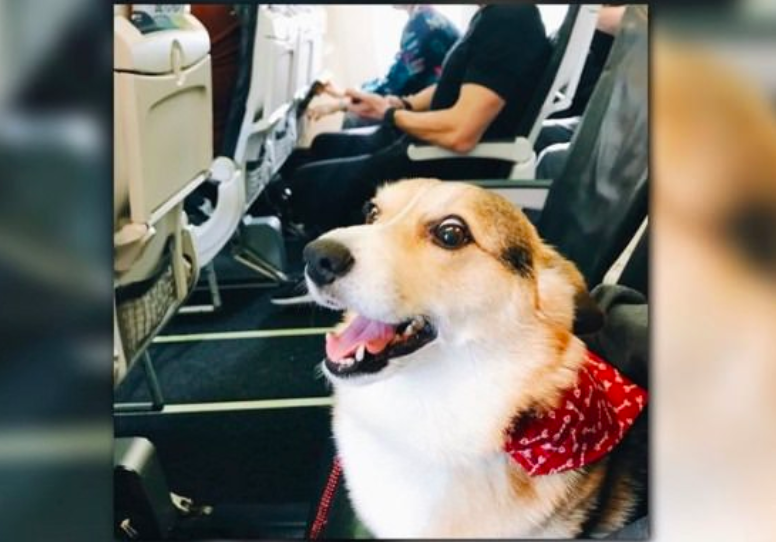 Madison has also noted that Cora loves to go up to strangers and interact. This is exactly what happened on one trip that the pair was taking on February 9th. Madison and Cora were on their way to Alaska from Idaho from Cora made an intriguing discovery… 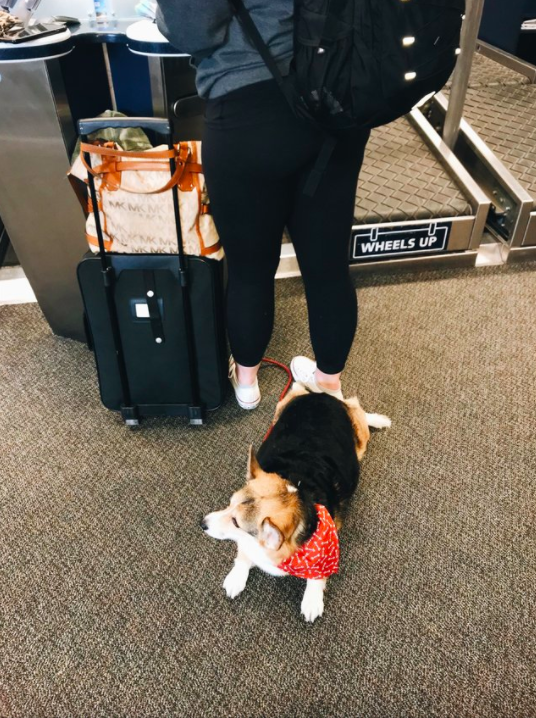 The pair was stuck in the airport, waiting for their flight to finally board and takeoff. In the meantime, Cora’s friendly nature had her going around to everyone and introducing herself. That was until she stumbled across one man in particular. 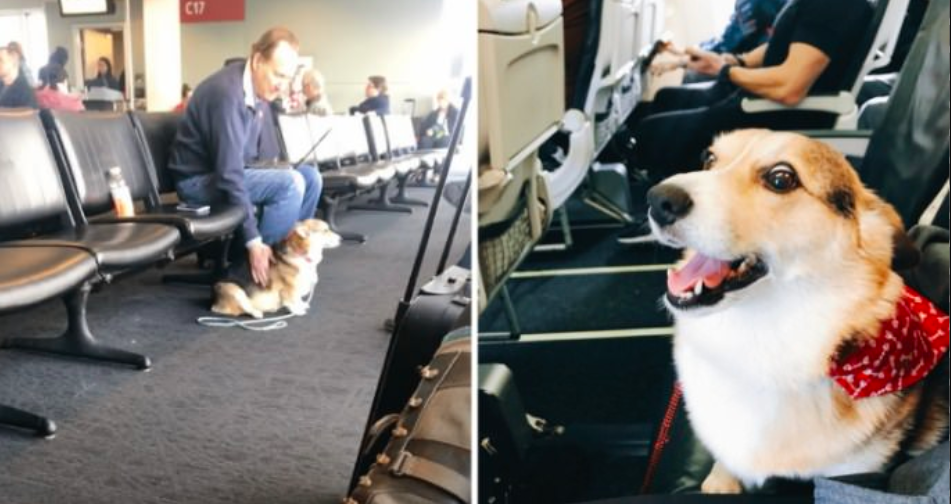 “Cora just kind of walked around in our little seating area and said hi to everyone who was walking by and sitting near us,” Palm said. “She was taking a snooze so I let go of her leash briefly while I relaxed and had a snack; that is when she woke up and snuck over to him.” Palm noticed that Cora was completely enamored by the man and continued to stay by his side. 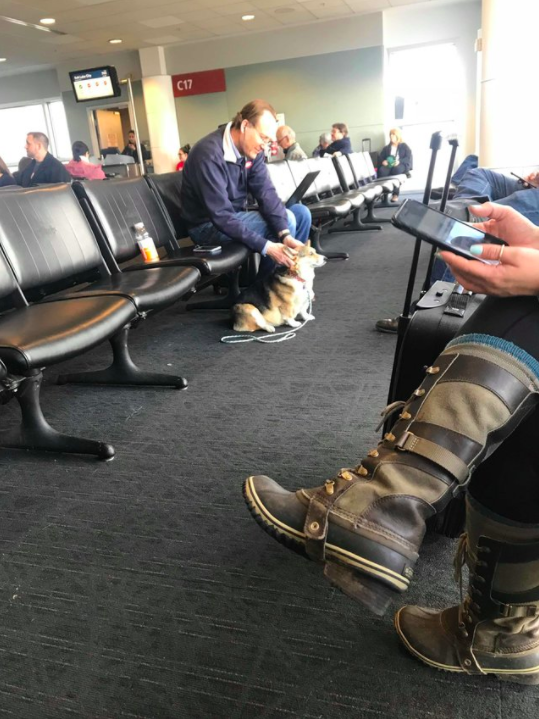 Cora had found her way over to a man that was sitting all by himself. She was immediately drawn to him and stayed by his feet. The man began to pet Cora and Madison quickly worried that Cora might be disturbing the man. Madison quickly sprung into action… 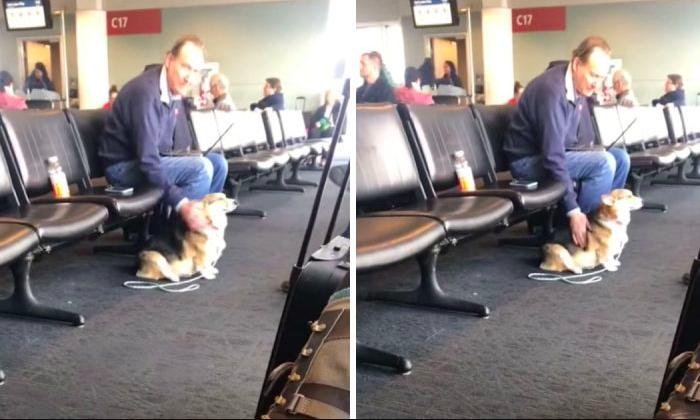 Madison worried that the man was bothered by Cora’s presence so she walked over and asked the stranger if she should pull Cora away. The man quickly looked up and said that Cora wasn’t bothering him at all. Then he revealed the most shocking truth. 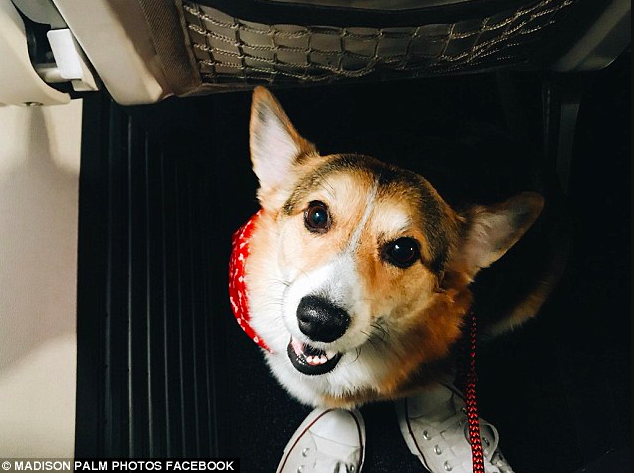 After Madison has started up a conversation with the man, he revealed that he had to give up his own dog the night before due to personal reasons. Madison was completely taken aback by this discovery. She knew at that moment that the decision to begin training Cora was the right one. 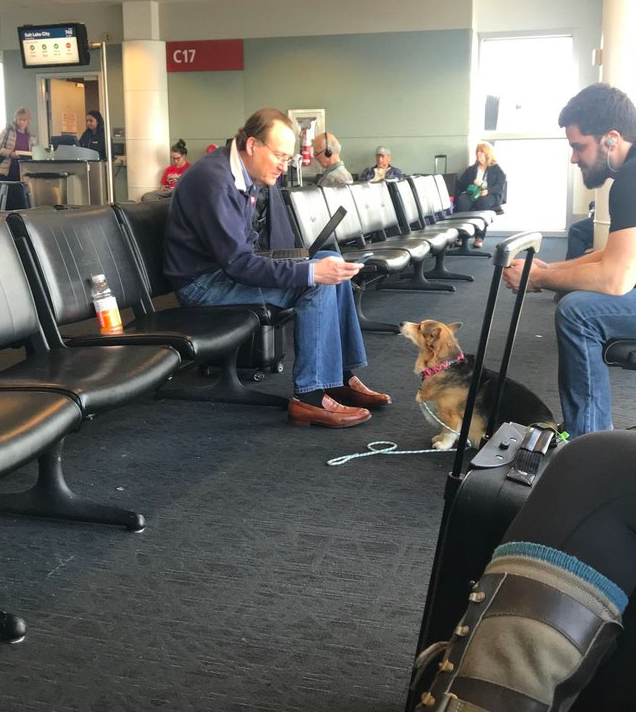 “I asked him if she was bothering him and with a somber face and watery eyes he said, ‘No, no; I gave up my dog last night.’ He scratched behind her ears, patted her on the back and was whispering how cute she was. He took out his phone to snap a photo and she sat directly in front of him facing him and staying perfectly still for it.” 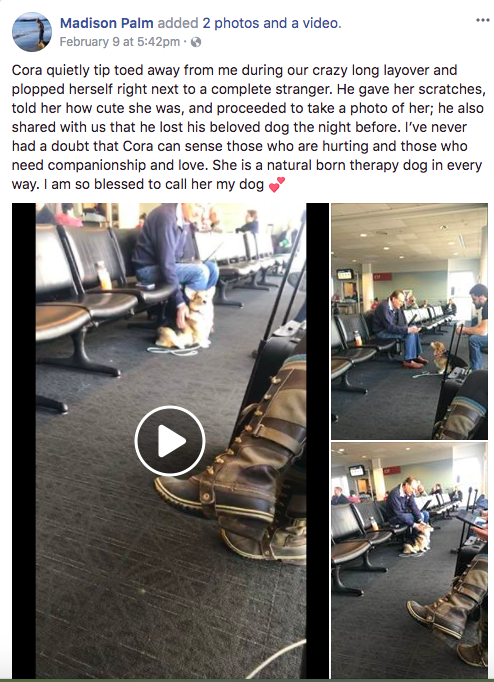 Palm took to Facebook to share the incredible story! “I’ve never had a doubt that Cora can sense those who are hurting and those who need companionship and love,” Palm wrote in a Facebook post. “She is a natural born therapy dog in every way.” The post was overfilled with positive comments. Everyone was touched by how caring Cora is. 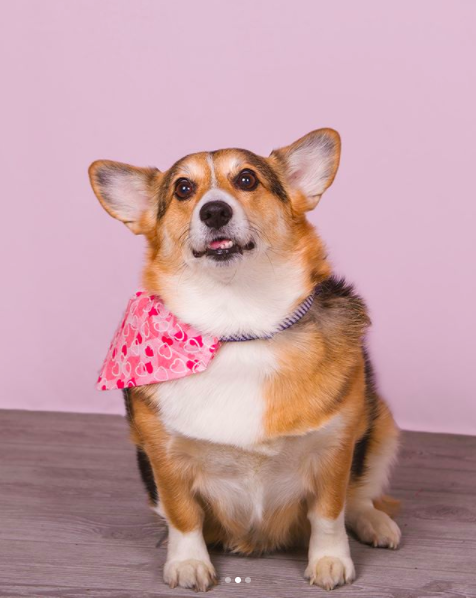 “I truly think she has a gift. She knows who needs her,” Palm said. “Once he told me that he gave up his dog I looked at Cora and I thought to myself, ‘You are so amazing. How did I get so lucky?’” 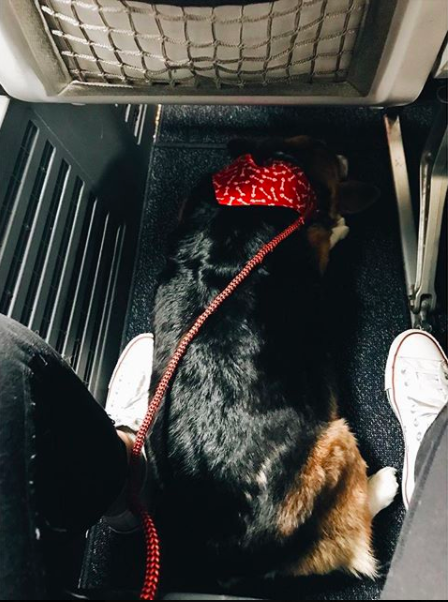 However, this wasn’t the end of Cora’s heroic and caring nature. On the flight back from Alaska, Cora once again came to the rescue to someone else that was stressed and in need of some reassurance. Madison was once again surprised at just how well Cora seemed to respond to those in need. 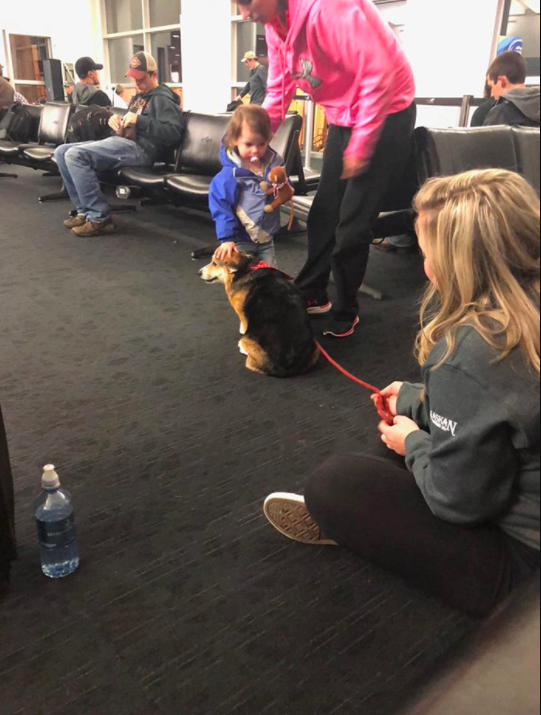 On the flight back home, a young child was running around. Cora’s instincts immediately sprung into action and she approached the toddler. The child immediately calmed down when Cora made herself available – how amazing is that?! 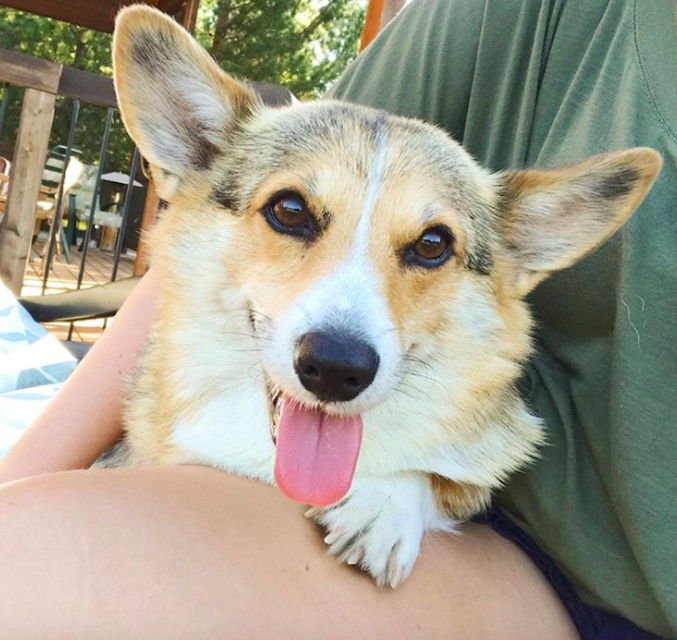 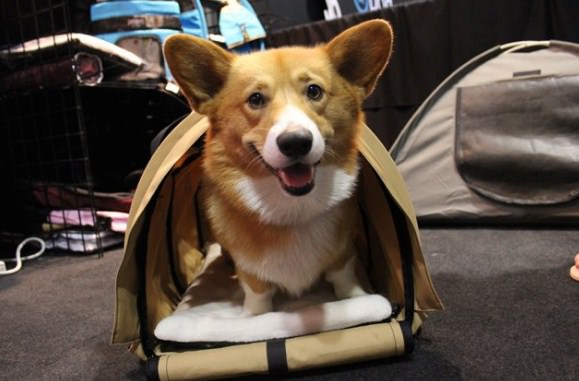 “I believe Cora has the ability to feel sadness and empathy for people,” Madison told BuzzFeed. “I think she can somehow sense who is experiencing sadness. She aims to comfort people, it’s her favorite thing to do.”

Cora seems to have an uncanny ability to scope out those in need of love and nurturing. Cora’s abilities will now be put to great use on many individuals that are in need of therapeutic coping mechanisms. Madison has never been more proud to own a dog…

“I am blown away by her on a daily basis. Who knew a dog could have so much love to give?” Palm shared. Sometimes, the best support systems can come from the loving nature of animals. Be sure to share this story with all of your dog loving friends and family members! For more about animal-assisted therapy, click here to read more from BetterHelp.