Finding someone that you share a common bond with is a rare find. However, when you do, it can bring about one of the closest connections that you’ll ever find. That is exactly what happened when these two monkeys were introduced to each other. You’ll fall in love with these monkey’s reaction to one another as they meet for the first time after such a rough start in life. 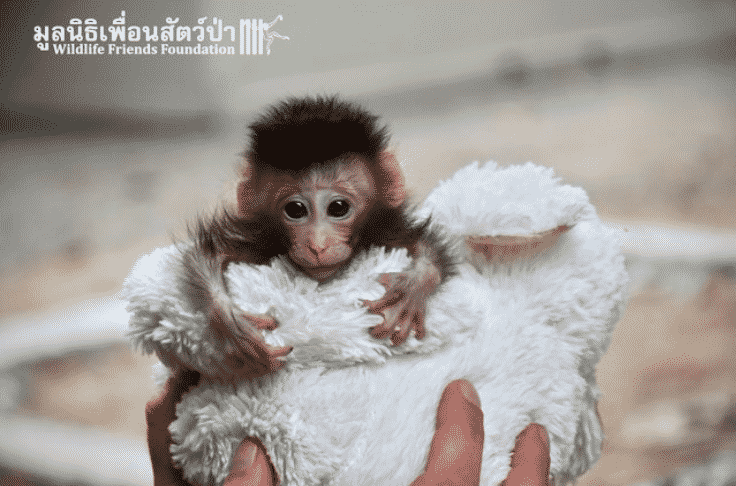 In Thailand, a tiny baby monkey was discovered. The monkey was abandoned and had nowhere to call home. It was then the rescuers realized that all the baby monkey wanted was to be held… 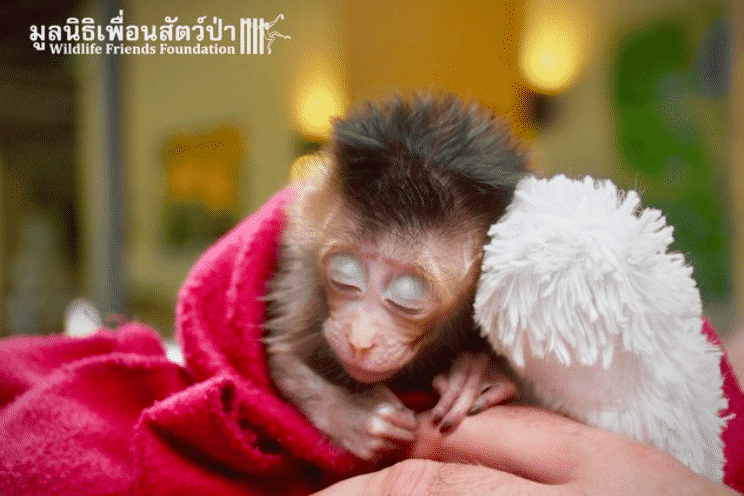 The rescuers named the tiny long-tailed macaque Pearl. They then gave her a stuffed teddy bear to keep her company while she was all alone. The entire time, Pearl refused to let go of the bear. 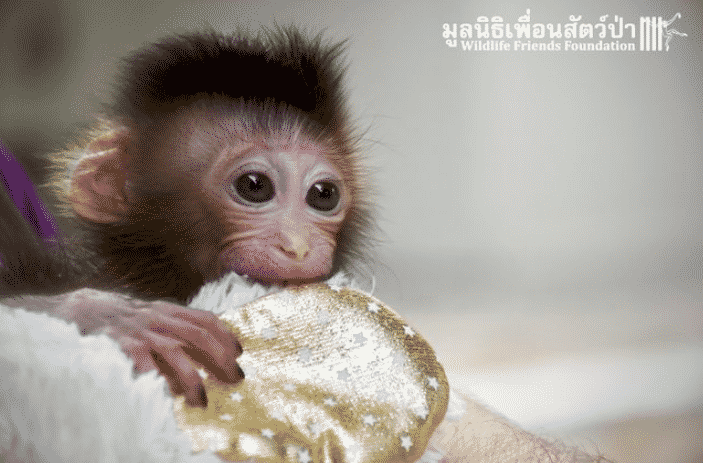 “Pearl still cries from the loss and lack of her mother’s care,” Wildlife Friends Foundation Thailand (WFFT), the organization that rescued Pearl, wrote. It seems that the little macaque was in desperate need of love and affection and had no way of receiving it. 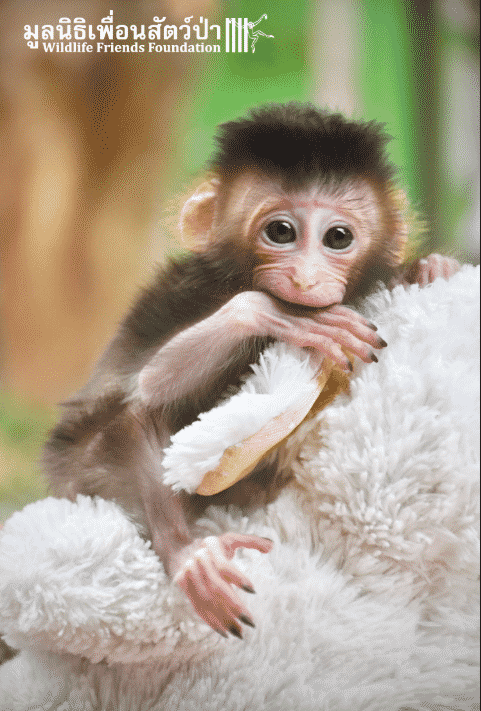 “She is holding teddies like she should have done with her mom. She wants to be warm, to feel safe, loved.” It was a heartbreaking sight to see Pearl clutch onto the teddy bear with all of her might. So how did Pearl wind up abandoned? 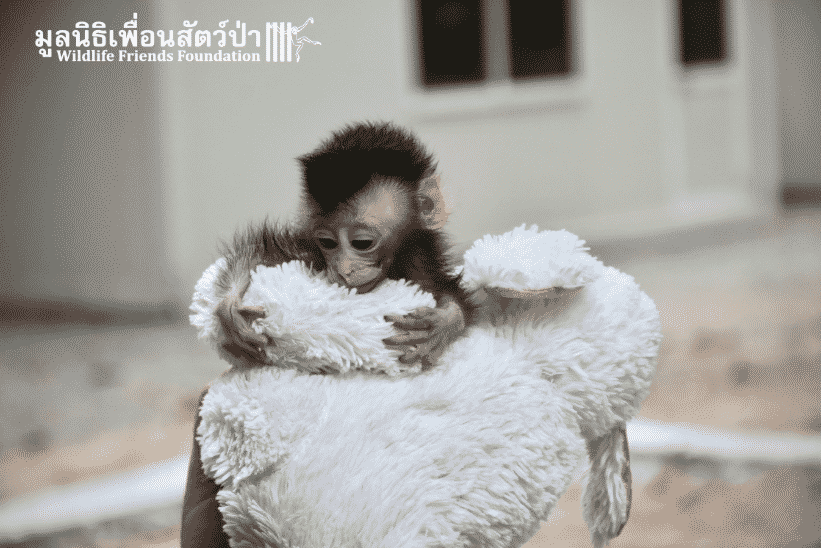 Pearl was being sold in a market after she was stolen away from her mother. A woman had purchased Pearl and kept her for 10 days before she realized that she had no idea how to care for a baby monkey. That was when she realized she was in over her head… 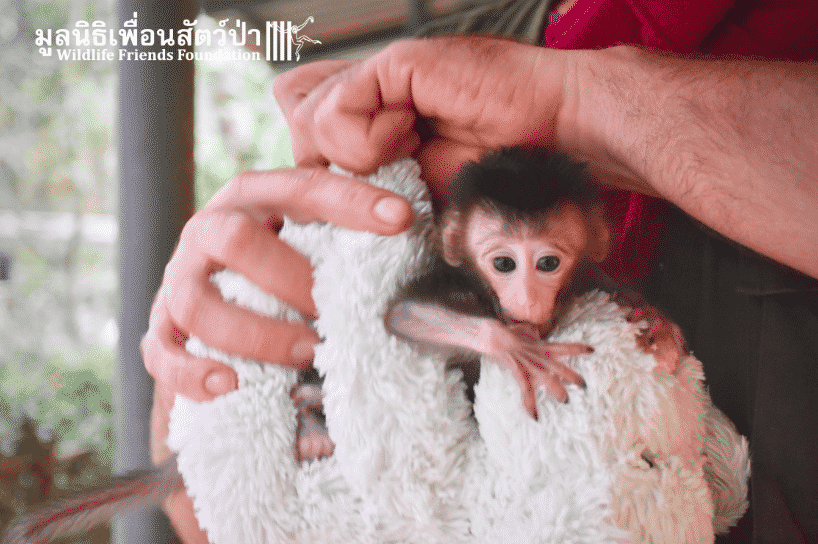 The woman eventually realized that she didn’t have the knowledge or experience to keep Pearl for herself. That was when she decided to give the little monkey up to the WFFT. Even still…Pearl wasn’t completely happy even in better care. 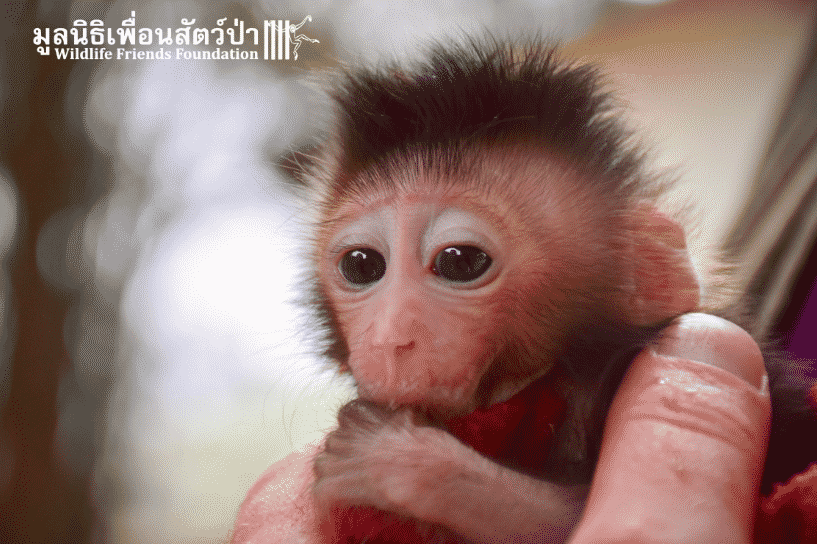 Even though Pearl was being taken care of by experts, she still desperately needed the companionship of another monkey just like her. However, she had no idea that she would soon be meeting someone that would change her life forever! 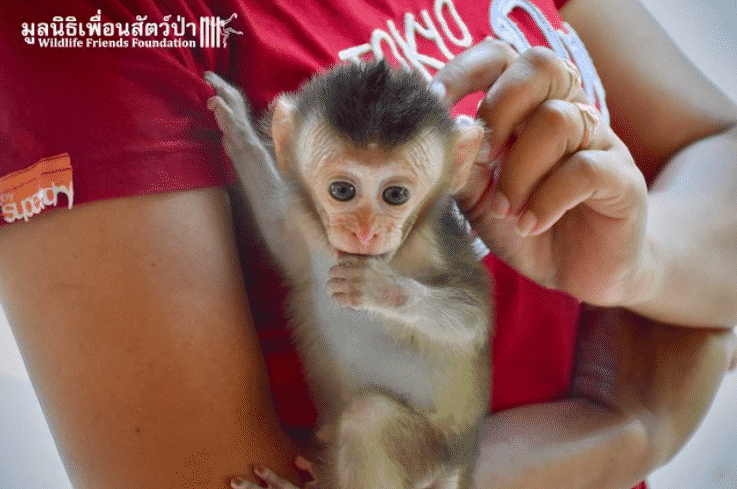 Back in March, people walking along a roadside spotted one of the saddest sights ever. A monkey, who they later named Boon Ma, was holding onto his dead mother’s body and refusing to let go. The people knew they had to get the monkey to shelter. 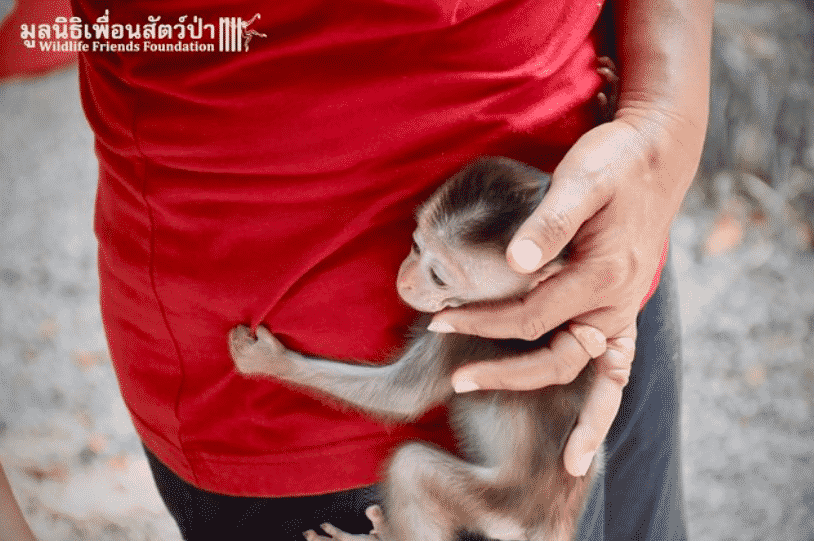 “The people that brought him in had kept him for two weeks after finding him clinging to his dead mother,” WFFT wrote. The people that found him attempted to care for him but quickly realized that they didn’t have enough experience to. 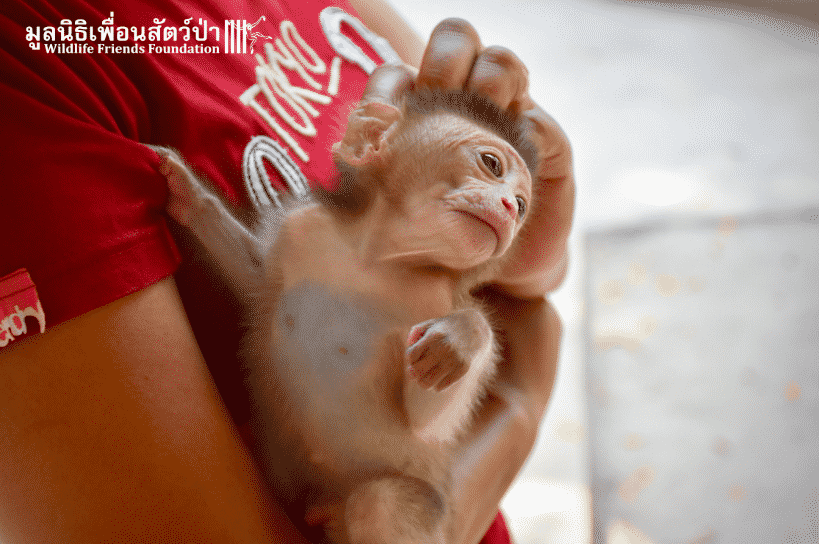 “We were told that they had attempted to introduce little Boon Ma to another adult female in the wild macaque troop but this did not work; after a day they had to recapture him for his own safety.” Just like Pearl, Boon Ma was desperate for affection and would cling to his rescuers. 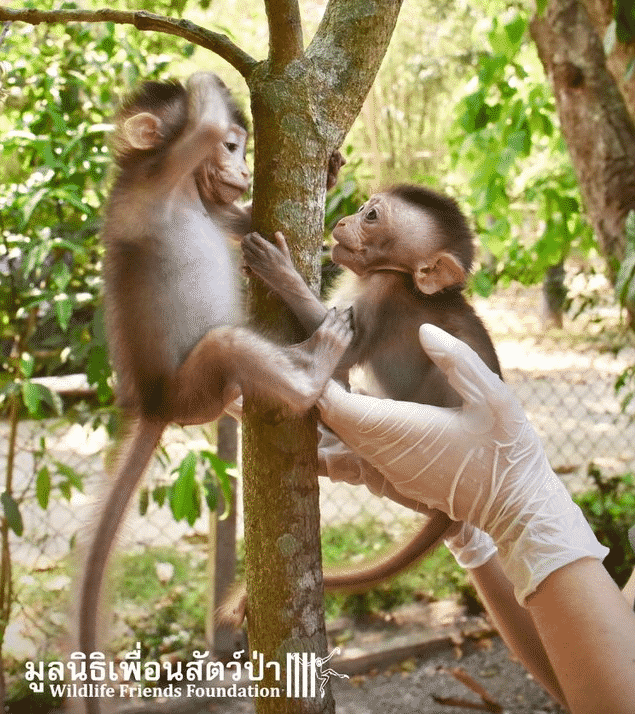 The rescuers quickly realized that both Pearl and Boon Ma went through similar situations. They were also both close to the same age. That’s when the rescuers decided to introduce to them to one another. You won’t believe how it went! 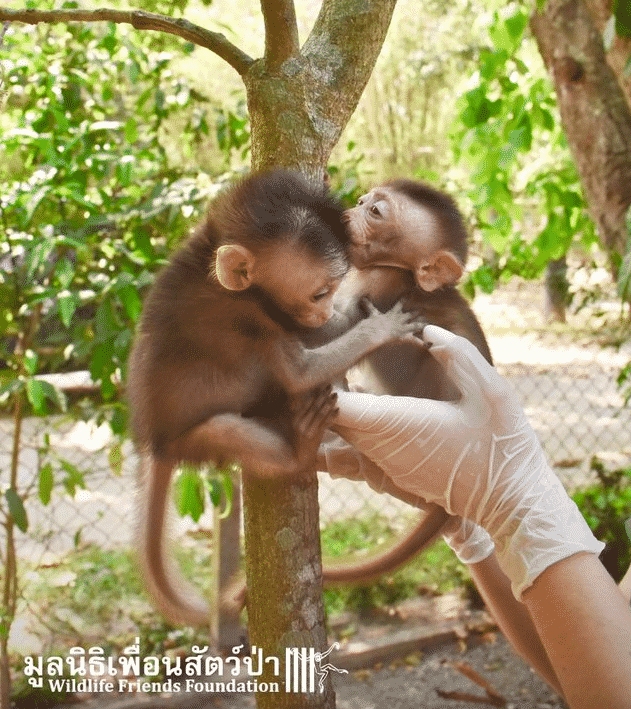 Finally, the day came for the two to meet for the first time. The rescuers were super excited to see how the two would react to one another. Then, just as expected, the two completely clicked! 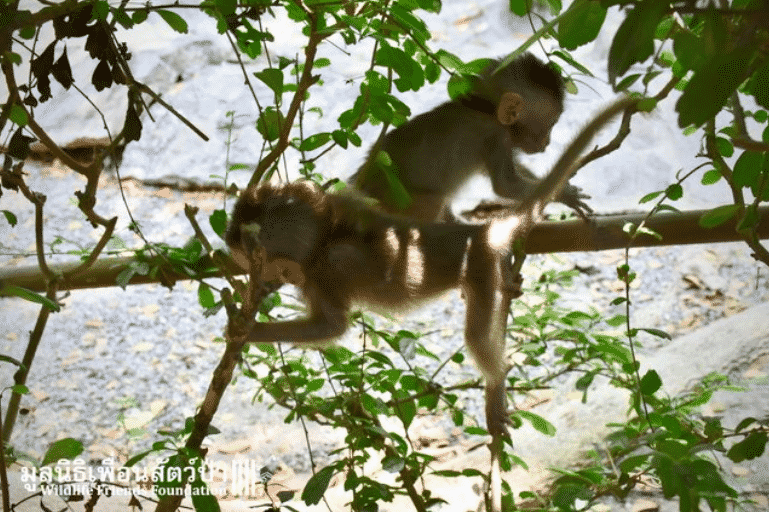 The rescuers were so excited when they saw how well Boon Ma and Pearl got along. Finally, these two sweet monkeys would no longer have to be alone and desperate for love. The rescuers even call the pair “inseparable.” 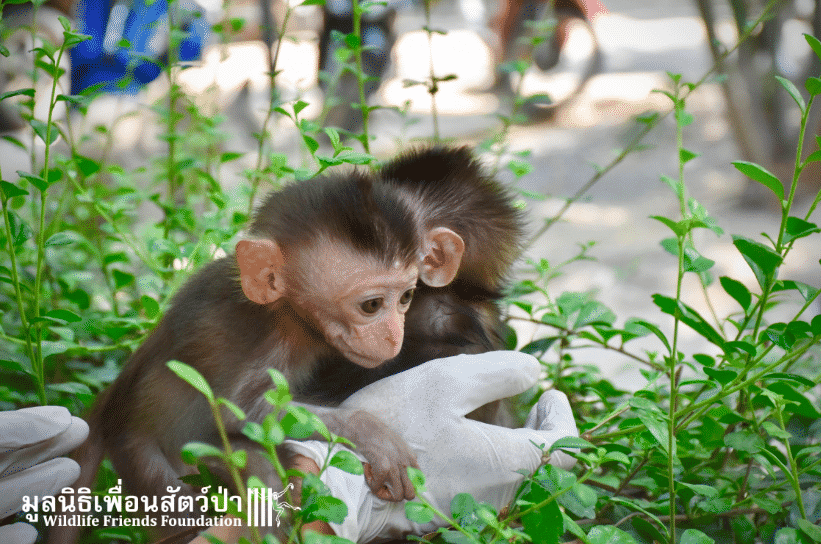 “Little Pearl … has now become firm friends with even smaller Boon Ma,” WFFT wrote. “Having each other will help erase the bad memories from their unfortunate start to life.” You won’t believe what one of their favorite things to do together is. 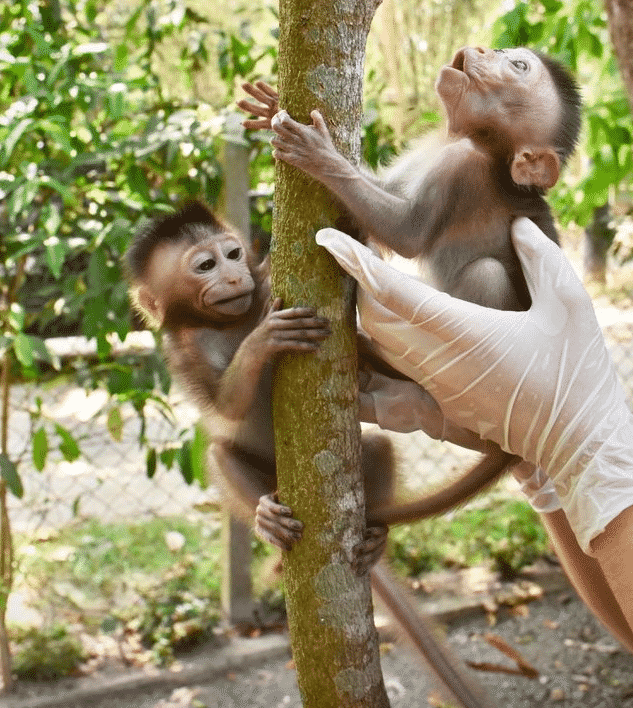 This couple absolutely adores climbing up trees together. In fact, it is one of their favorite past times. The rescuers believe that this activity helps them both reconnect with their wild nature while living at the sanctuary. 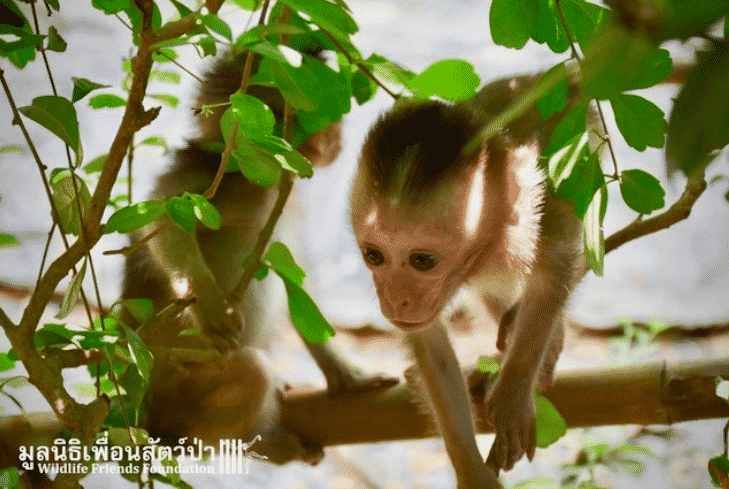 “They spend all day and all night together now,” WFFT wrote. The pair loves to hang out together and they both get very upset any time they have to be separated. They have grown very close and rely on each for companionship. 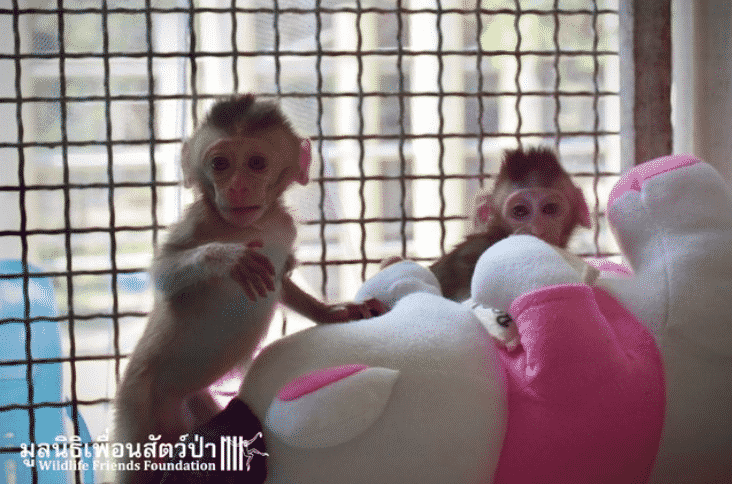 Both of these little monkeys were very clingy. Whether it was toward their rescuers or toward a stuffed bear, these two didn’t know how to survive. So do they still rely on these things? 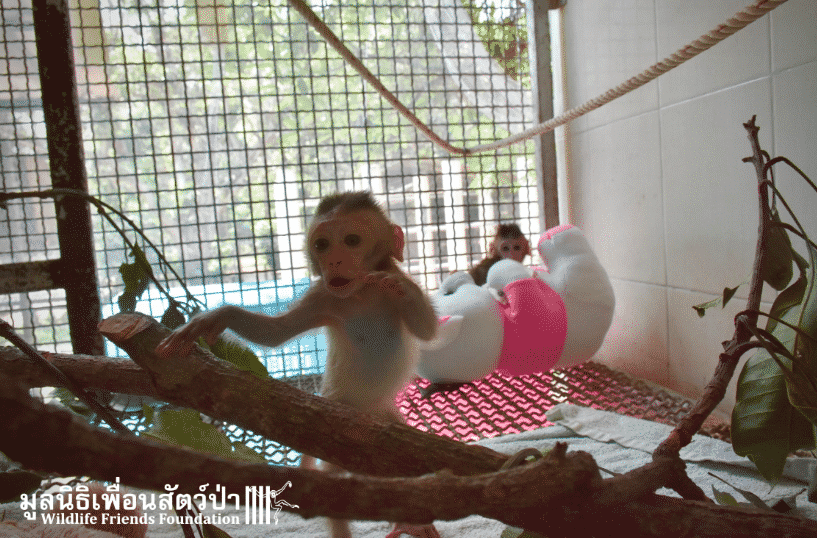 Nowadays, the monkeys don’t rely on their stuffed teddy bears as much. They now have each other and whenever they feel lonely they’re never too far away from each other. 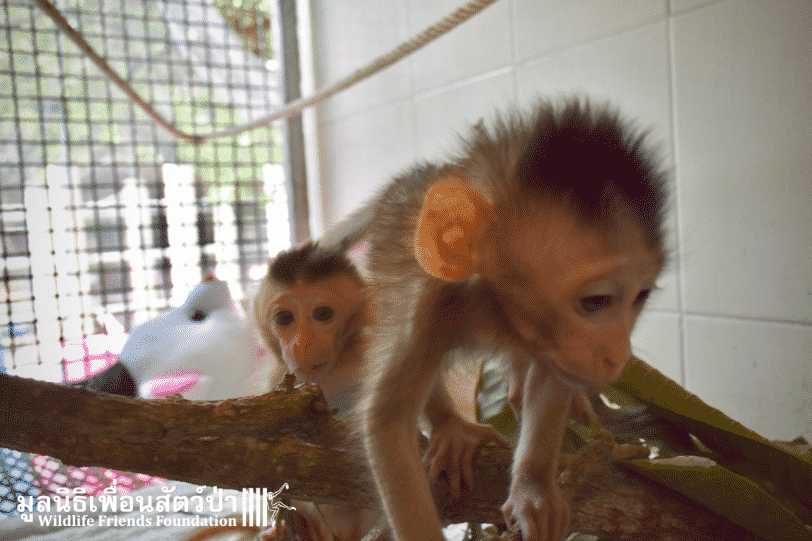 The pair continues to live with at the WFFT and are enjoying life. They are looked after, given toys, and fed daily meals. They no longer have to live with the fear of being abandoned ever again. 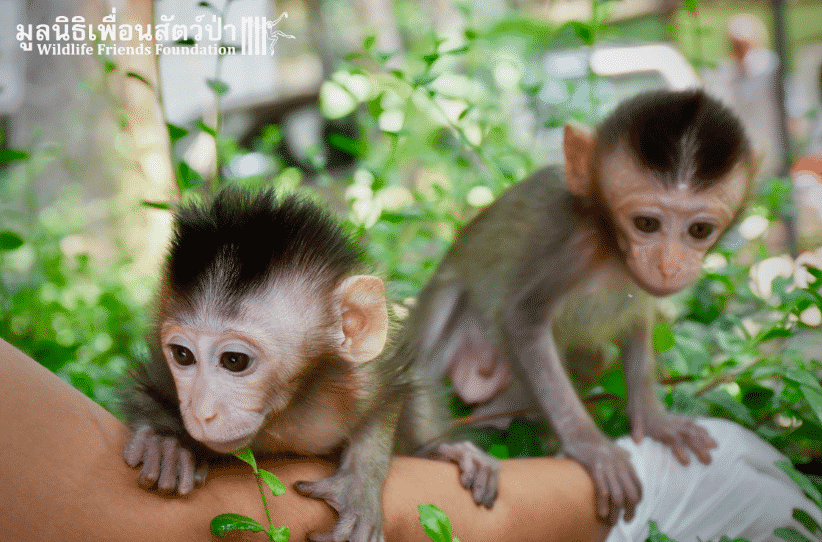 Strong bond are hard to come by and these two monkeys are a living testament to that. However, now that they’e found each other, they no longer deal with the pain of loneliness ever again.