Not too long ago, these sailors from the Sri Lankan Naval forces spotted a “weird” animal in the water. As they closed in, it turned out to be an elephant frantically thrashing and kicking to save his life. How the poor fella’ ended up in sea 8 Km’s away from the shore is still a mystery to this date. However, the story ends on a happy note. Read on…

20. Everything Seemed Ordinary Until…

Nothing seemed out of the ordinary when these sailors were deployed on a routine training mission. They were carrying on and about with their deep water and over surface maneuvers when someone from the crew spotted a big animal at a distance.

The water’s murky surface combined with a maddening current made it difficult to get a clear visual, but these sailors knew that something wasn’t right. It could’ve been an enemy vessel or something equally dangerous. Therefore, the Sri Lankan naval headquarters gave a go ahead for a closer inspection.

18. Turns Out It’s an Elephant In Need of Desperate Help 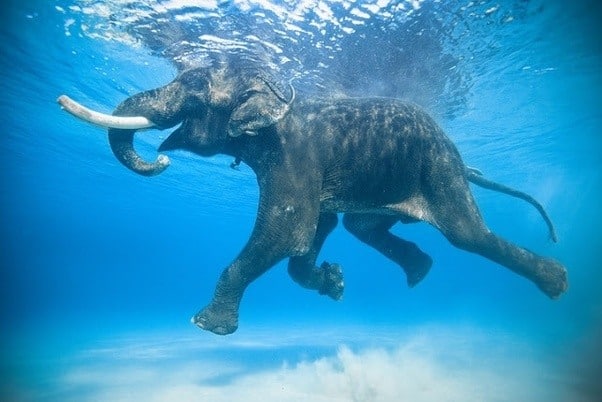 It turns out that this “weird” animal was a young elephant trying his best to stay afloat. The waves were making it extra difficult for the poor soul to catch his breath. The sailors immediately decided to save the elephant before it was too late.

The only problem was that they couldn’t lift the elephant and bring him on board. Obviously, he weighed a ton, and the sailors admittedly had no prior experience with animal rescue under such circumstances. The navy officers called in for help. Soon after an hour or so, Sri Lankan wildlife officers and coast guard showed up to lend some help.

These sailors were used to seeing wild and unpredictable things out in the sea, but an elephant caught in the middle of a maddening current was something out of imagination. It went without saying that something had to be done immediately to save the animal from his unfortunate fate.

15.  Navy Officers Close In for an Inspection

A close inspection revealed that poor “Bambi” was making every effort to stay above the water level. They could see him kicking his legs and keeping his snout on the surface. However, each passing minute was sealing in a doom like a situation where the elephant could go down any moment – never to show up again.

14. Will The Doomed Elephant Make It ?

The crew and wildlife rescue experts made a few circles around the elephant. They didn’t want to alarm the animal as it was already too frustrating. By the time, the rescue team got in close enough, our big friend barely had any strength or stamina left to stay alive.

13. No One Expected that a Rope Could Come Handy!

Tying a rope was the easy part; the current still posed a serious threat to the animal’s life. No one was sure whether the elephant would be alive by the time they made it to the coastline. Besides, the distance between land and sea was way above 8 Kilometers!

11. The Elephant Had Little to No Hope of Survival

Throughout the rescue mission, wildlife experts remained constantly in contact with the Sri Lankan navy sailors. At one point, they all agreed that while the actions were critical to saving the elephant, the mission would eventually fail if the animal failed to put up a fight.

As the boats got close to the shore, the elephant was barely able to hang on. He was lucky to be dragged towards the shoreline because, by the end of the rescue mission, all that remained of the elephant was a snout staying above the water surface.

9. Elephant Puts Up a Fight Till His Last Breath

The rest of the elephant was completely submerged. As sailors recall that day months later, they couldn’t help but smile on associating the elephant’s snout with a snorkel. The way it constantly stayed above the water, reminded everyone how cute that snout looked despite the serious life-threatening circumstances.

According to one of the correspondents from Sri Lankan Department of Wildlife, they managed to safely guide the elephant to the Yan Oya area in Pulmodai. “The animal was handed over to experts as soon as we managed to bring him on land.”

7. An Unusual Story of an Unusual Animal

Perhaps this story and the unlikeliest circumstances in which the elephant was rescued may seem odd to you. However, these big animals have a knack for swimming in water – especially during summer season.

6. Elephants Are Not That Bad at Swimming

It is also believed that the first elephant ancestors came to Sri Lanka by swimming across entire water channel. The theory is still not proven scientifically, but some evidence does suggest that elephants are excellent swimmers as long as water and current conditions are favorable.

5. Perhaps the Goofy Guy was Taking a Shower

This elephant is believed to be taking a dip on a beach when the waves suddenly swept him towards deep treacherous waters.

4. Elephant’s Reunion With His Family is Breathtaking

The story ended on an emotional note when the elephant was finally released back to his family. Even the rescuers couldn’t hold back their tears at the sight of seeing all the elephants greeting the rescued fella’ after what seemed like an eternity.

3. Care to Know More about Elephants and Their Ancestors?

Biologists suggest that although elephants can swim for a long time, they burn their energy rather quickly. It was fortunate of this goofy guy to experience some friendly human intervention. Otherwise, he’d have been long gone before anyone could even notice the elephant’s disappearance into the sea!

The lovable elephant was named Jumbo by the sailors and wildlife rescuers. We all hope that Jumbo learned a lesson that day, and will be staying away from strong currents from that day onwards.

Do you have an amazing animal rescue story to share? If yes, then please fill us in through the comments section below. We’d love to hear more from you sometime soon.