How would you react if you came face-to-face with a giant humpback whale? Well, one flute player got the experience of a lifetime when a whale almost knocked her off her paddle board. You’ll be blown away at how close this paddleboarder got to a whale! 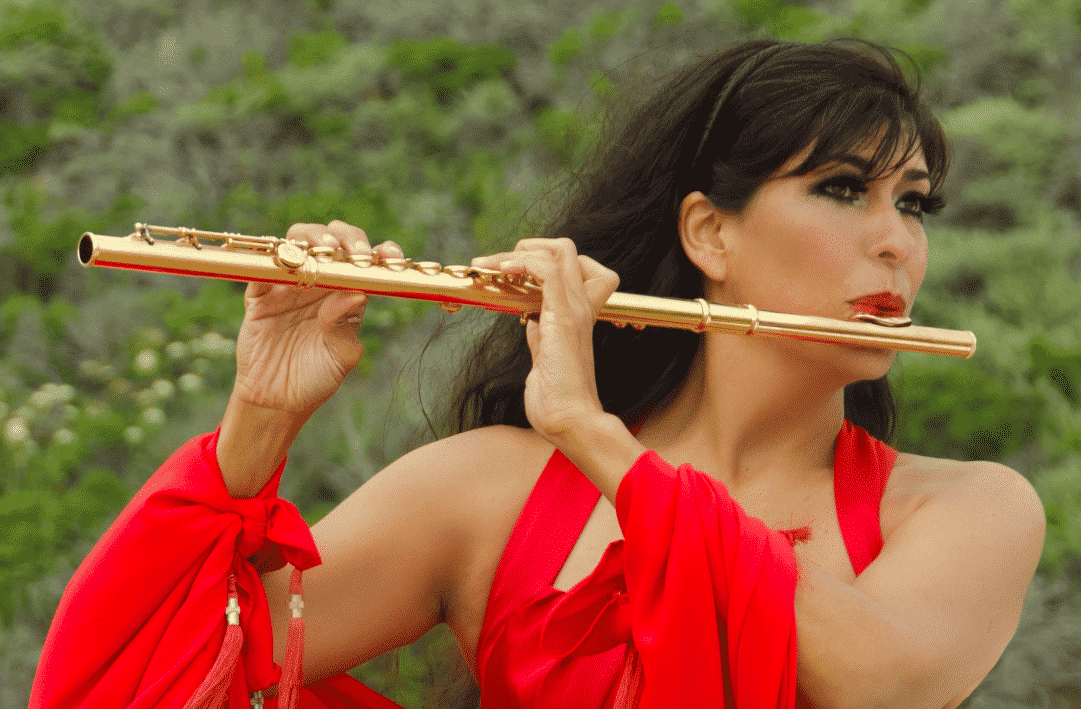 Viviana Guzmán is a Chilean professional flutist. She has performed in 122 countries and holds 80 concerts a year. She has even been recognized by big publications like The New York Times. 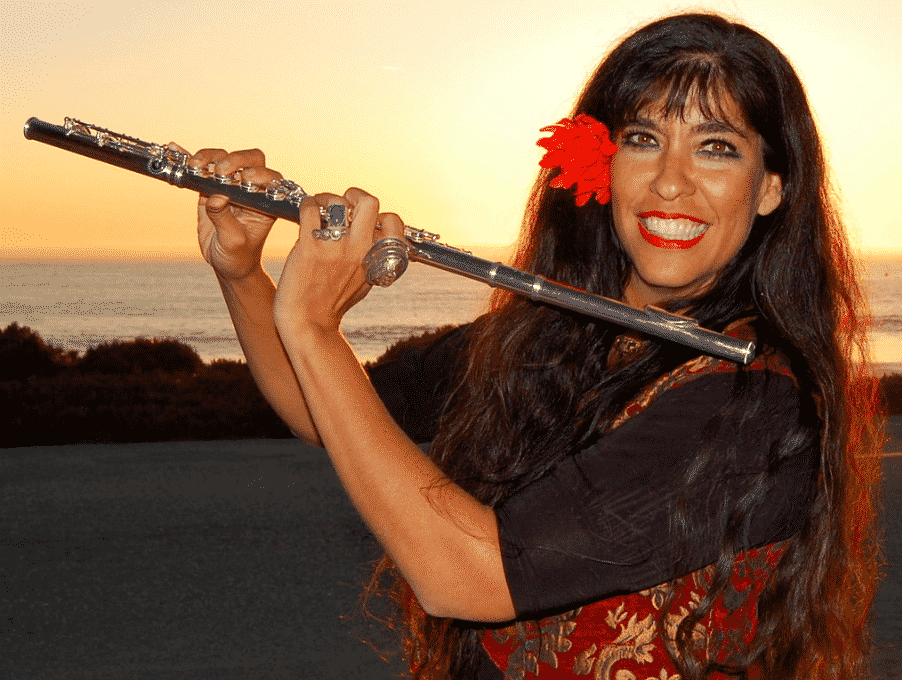 Guzmán has been described by The New York Times as “an imaginative artist”. Along with many CDs and live performances, she also has a YouTube channel that she regularly uploads onto. Her YouTube channel is a pretty big hit. 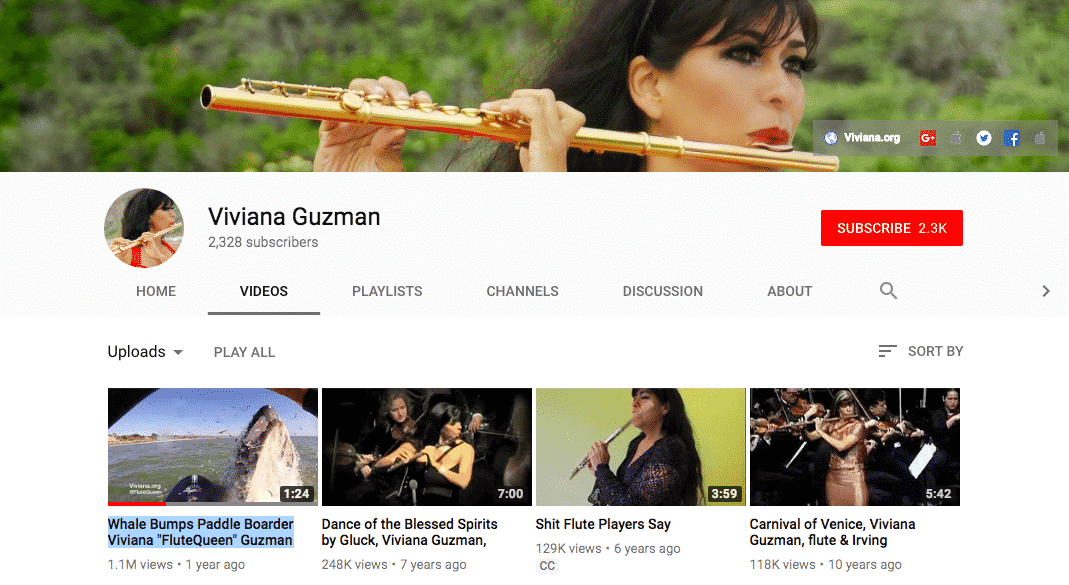 On Viviana’s YouTube channel, you can find tons of her live performances available to watch. However, her flute playing isn’t the only thing that she happens to be known for. In fact, Viviana happens to have a hobby that no one would have guessed. 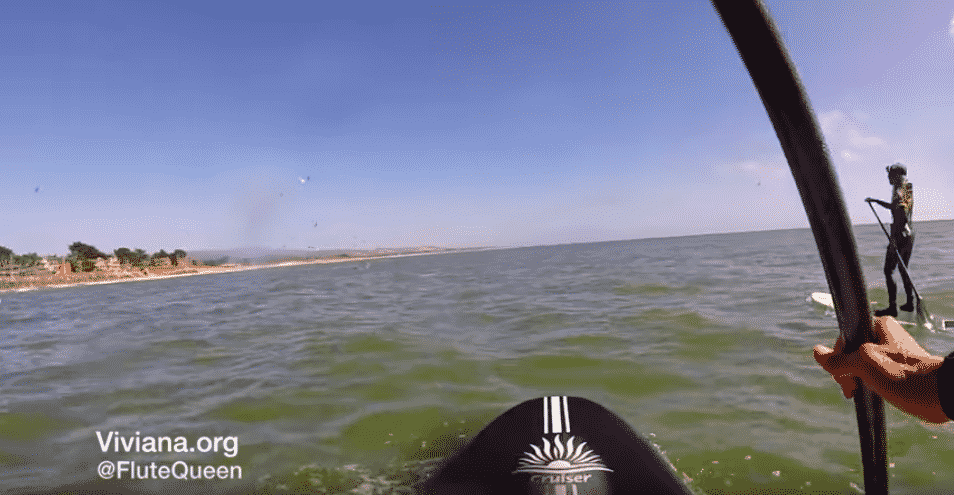 Outside of playing the flute, Viviana happens to love going on paddleboarding adventures. So what is paddleboarding? Well, here’s a brief rundown of this aquatic sport… 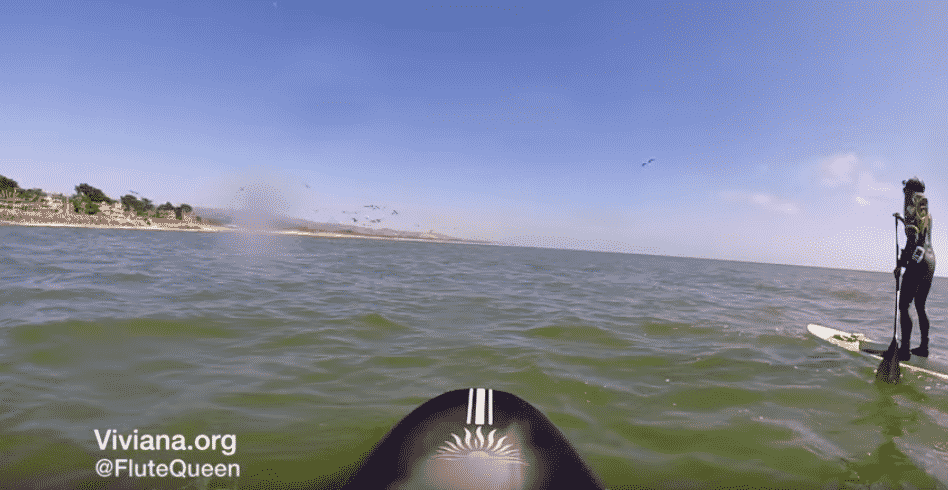 Paddleboarding is a water sport that utilizes a surfboard or paddleboard to move you around in the ocean. You can either sit on the paddleboard or stand. The sport has gotten quite popular over the years and serves as a great full-body workout. 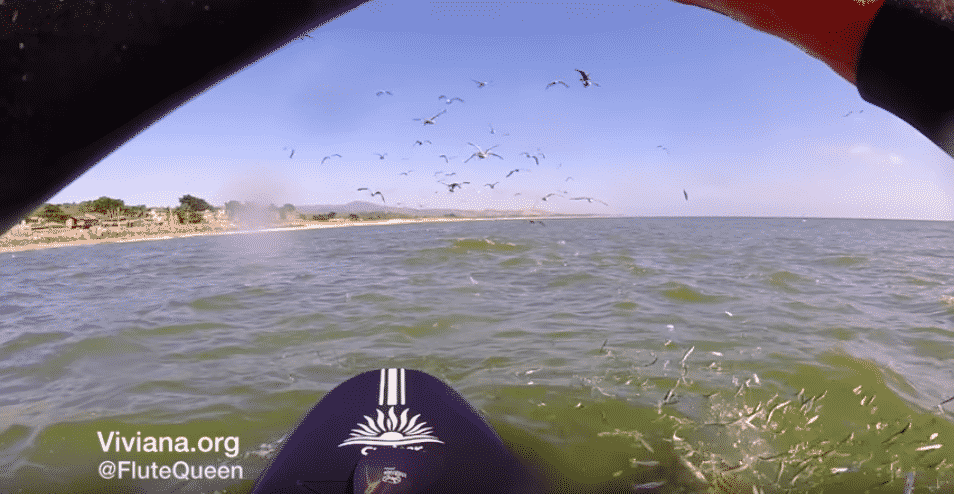 Viviana, who also calls herself ‘Flute Queen’ was out in the water in Half Moon Bay, California. It was typical day and she wasn’t expecting anything out of the ordinary to occur. Then the craziest thing happened… 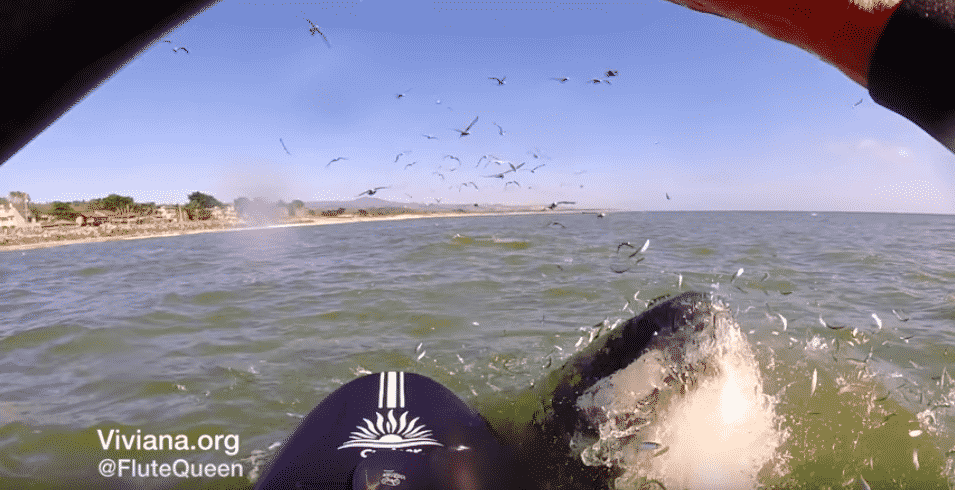 While sitting on her paddleboard in the middle of the ocean, Viviana decided to pull out her flute and begin playing. She wanted to play a song for the creatures that dwelled in the ocean. Little did she know that one would be joining her very soon. 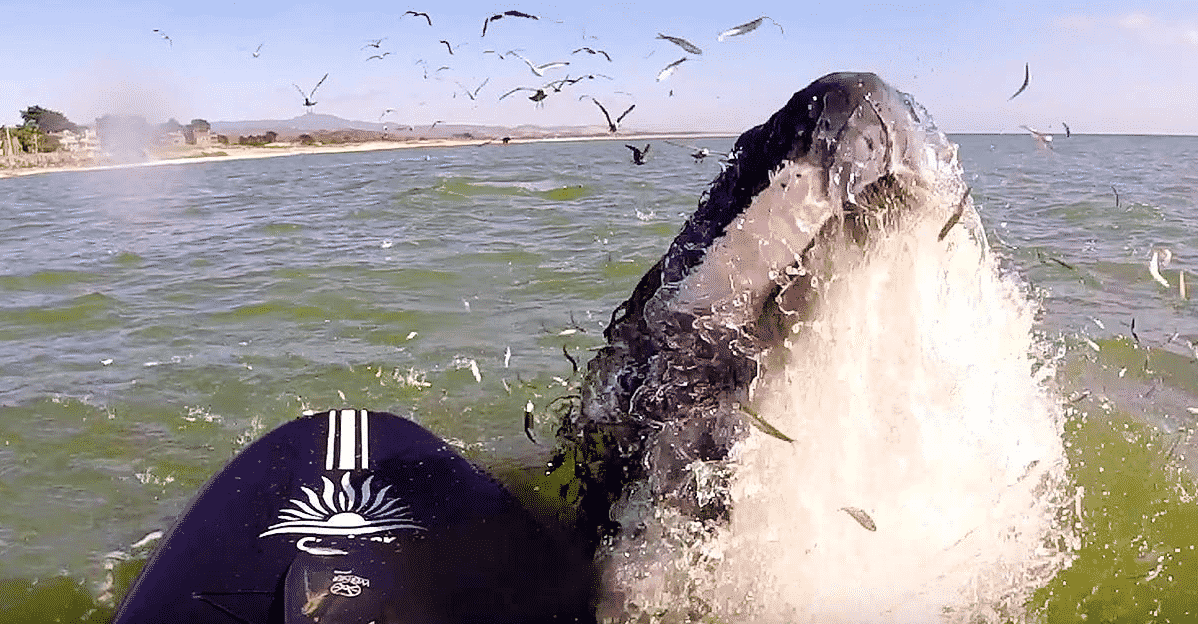 In a video that she had recorded, Viviana was spotted sitting on her paddleboard and playing the flute. Suddenly, out of nowhere, a giant humpback whale lunged up right in front of her. She has nearly blown away! 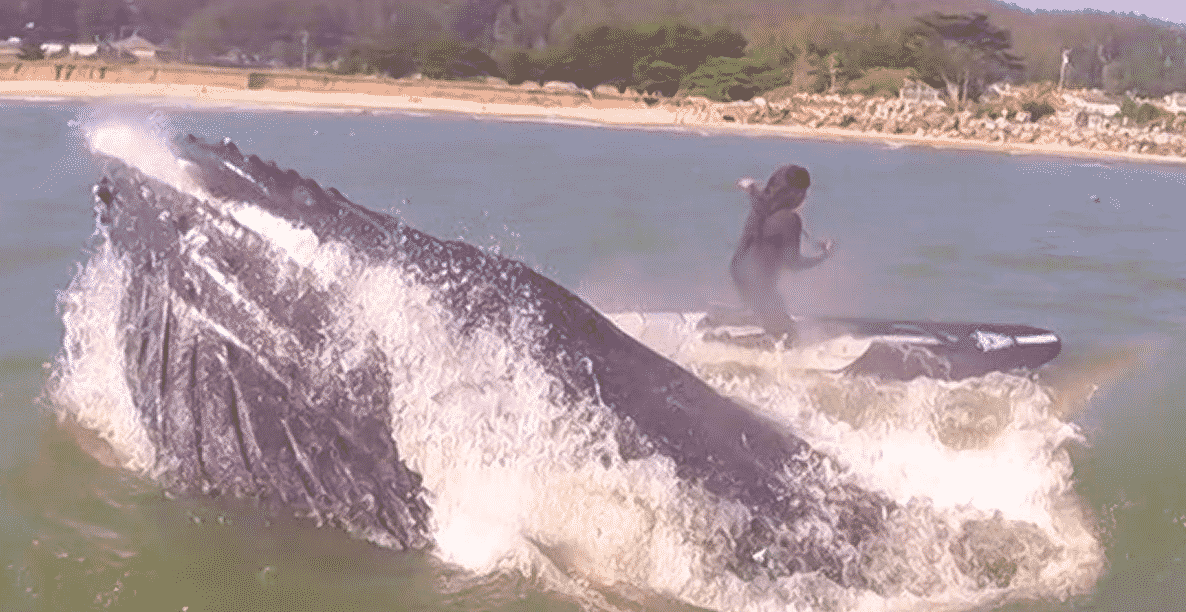 Someone else that was with her on the trip was also filming the experience. From the other person’s camera angle, you could clearly see what the whale was jumping out of the ocean for! So what was it doing?! 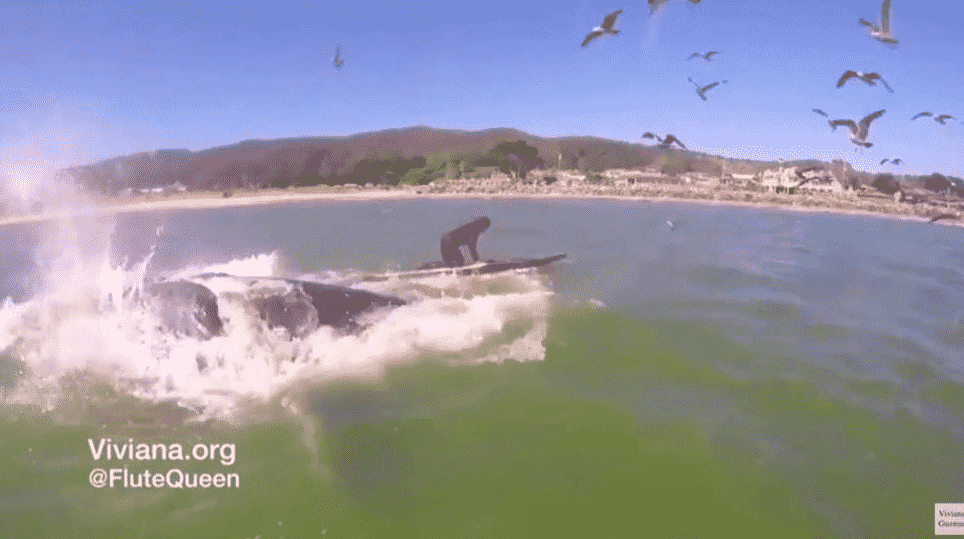 In the video footage, you can see the giant whale come out of the water with a mouthful of fish in its mouth. Viviana was in complete shock and almost fell off her paddleboard as the waves rocked her. Luckily, she managed to stay on! 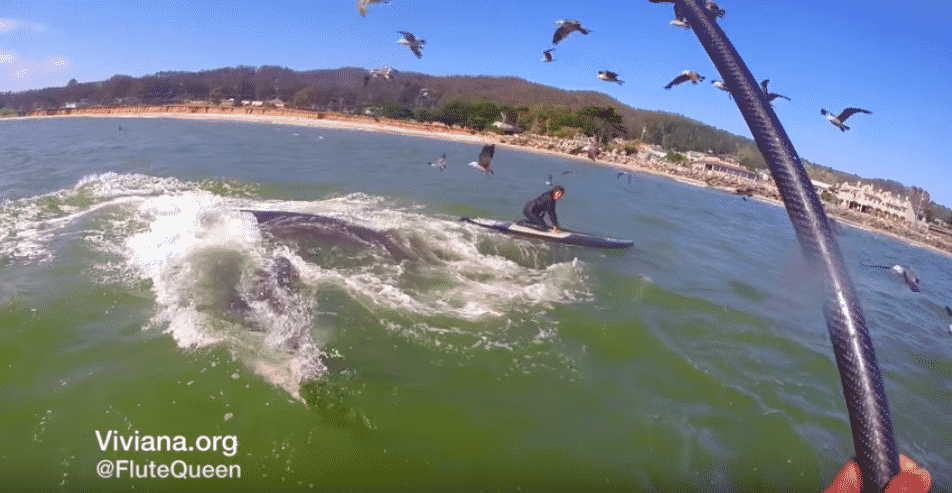 Viviana, who currently lives in California, couldn’t believe just how close the whale had gotten to her. When asked, she said she had noticed the whales while she was still on shore but had no idea that they would ever get that close… 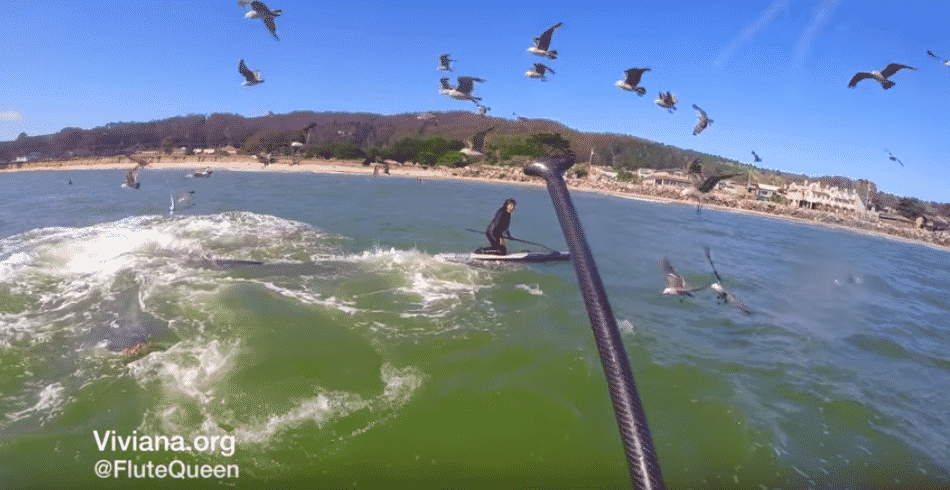 “In the 20 years I’ve lived on the coast they’ve never been this close,” Guzmán said. “I love going out on my paddle board and I have started taking my flute with me and they seem to like it.” 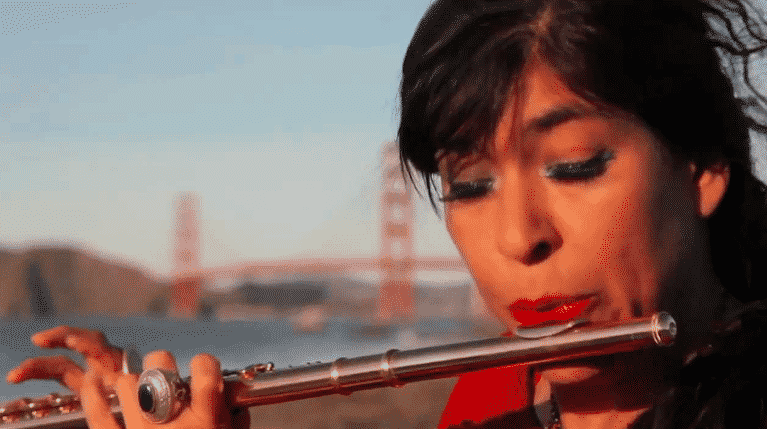 Viviana truly believes that it was her flute playing that brought the whales so close to her. “I play my flute for the whales, and they come!” Viviana wrote of the experience. She later went on to upload the video footage onto her YouTube channel. 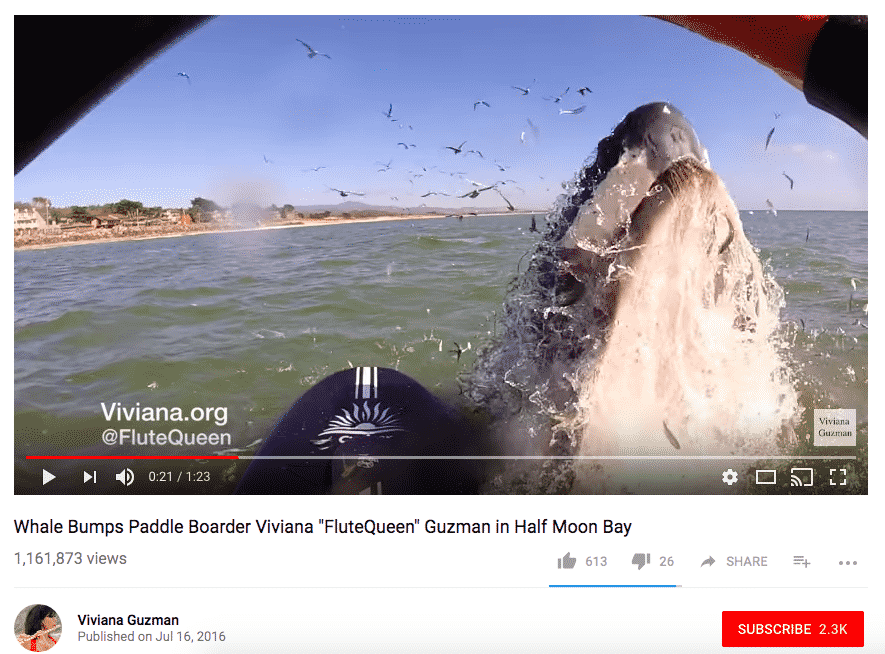 In the video description, Viviana wrote, “I was paddle boarding in Half Moon Bay, CA when all of the sudden a juvenile humpback leaped out of the water and lunge fed RIGHT NEXT TO ME!” The video instantly went viral and got tons of views! You won’t believe how many… 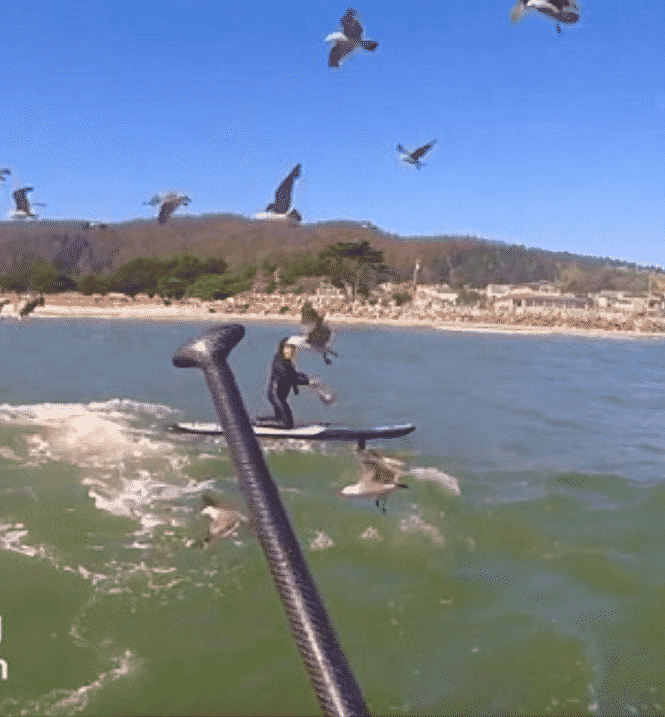 The video instantly went viral and has since received over 1 million views! Viewers have expressed shock and amazement over the content in the video. Most simply can’t believe their eyes… 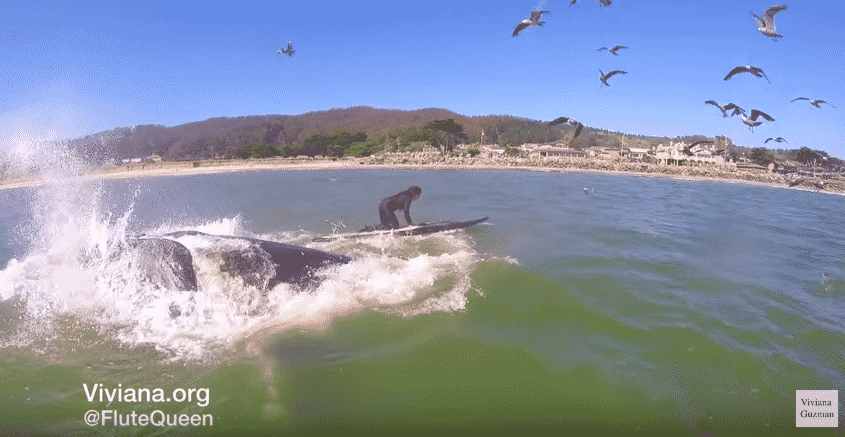 Many viewers left comments on the video expressing their delight at the once-in-a-lifetime encounter. One person wrote: “I think I would have fallen right off the board and into the water if a whale surprised me like that.” 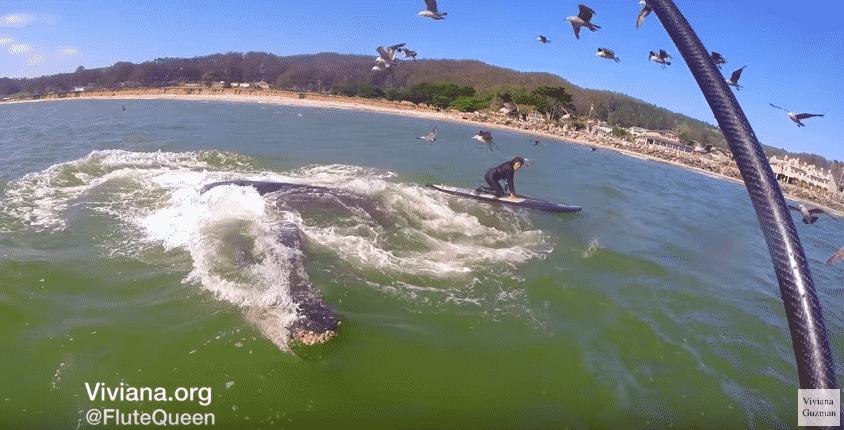 Viewers were also genuinely amazed at how calm and collected Viviana was throughout the entire experience. Another person wrote: “That would have put my heart into cardiac arrest.” Believe it or not, this wasn’t the last experience Viviana had with the whales in the bay. 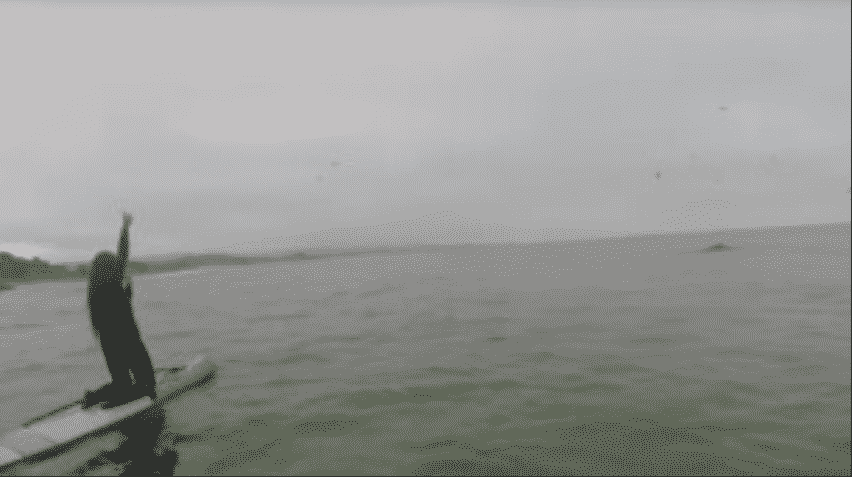 Surprisingly enough, Viviana somehow managed to see the whales again. She and her paddleboard partner went out into the water once more, where Viviana once again played her flute. She immediately caught the attention of another whale… 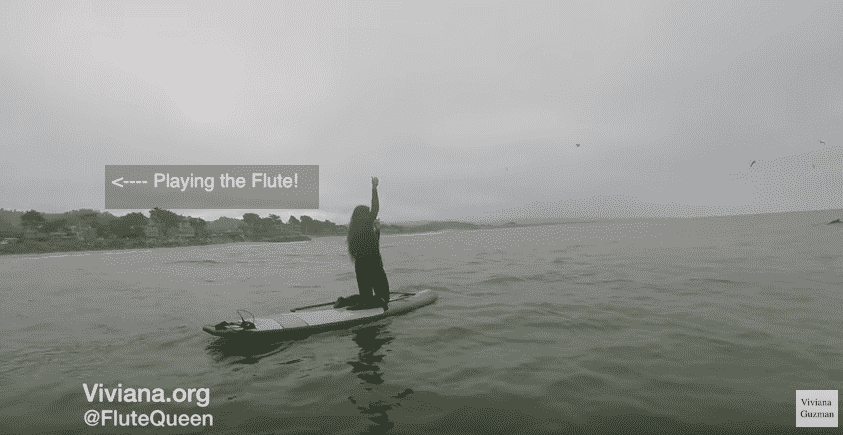 Viviana’s flute playing seemed to have brought over another whale. Her partner quickly noted, “She came to you!” It was obvious that the duo were excited for a second encounter. 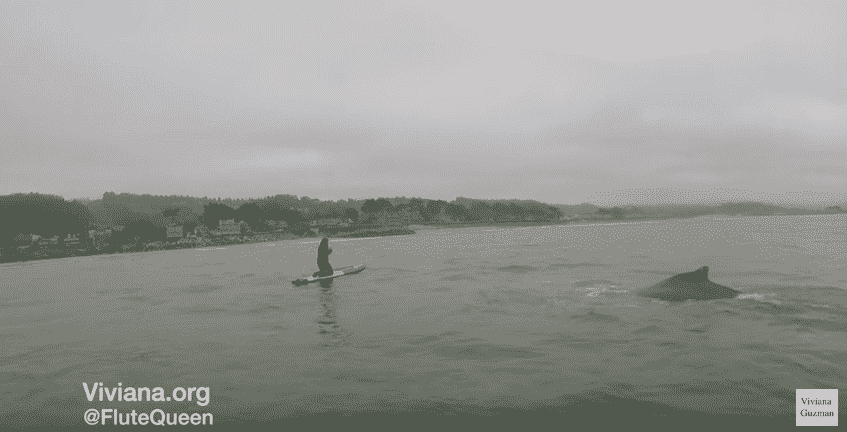 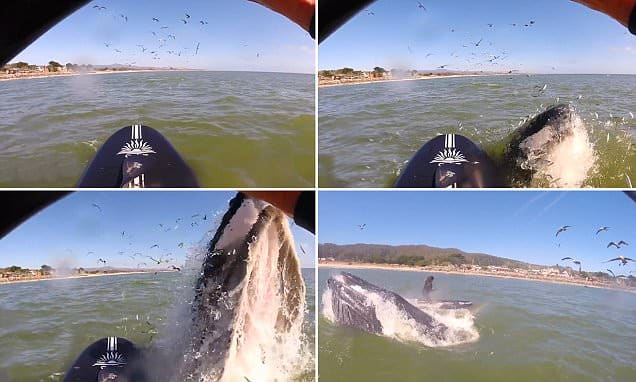 It is almost hard to believe that Viviana was able to get so close to a whale and all thanks to her fabulous flute playing. With the use of technology, all of us can experience the once-in-a-lifetime encounter with her!