After 30 Years Spent In Captivity, Fifi The Bear Is Finally Happy And Free

Imagine waiting 30 years to be rescued from a prison. Well, that’s exactly what one poor bear had to endure. This bear was held in captivity for 30 years and she suffered greatly. Until one day, an organization stepped up to help. Her transformation will shock you! 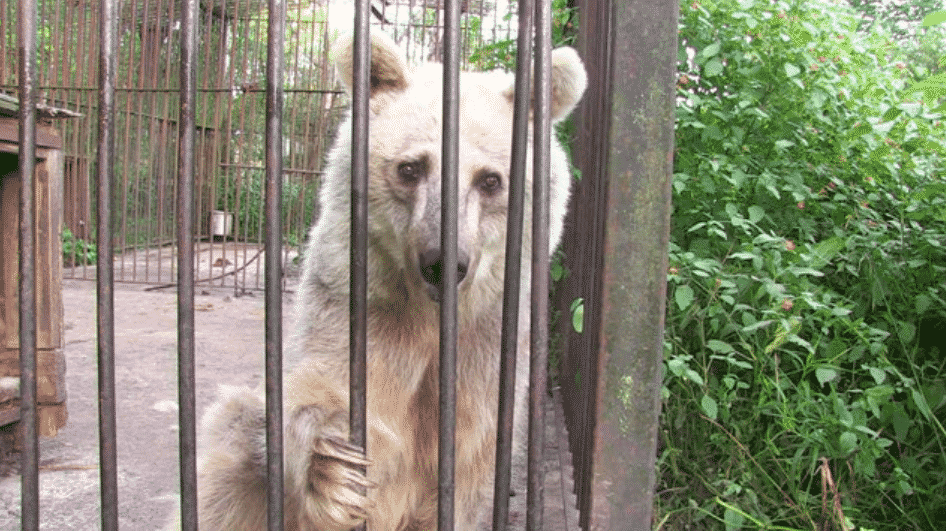 Fifi, a Syrian brown bear, spent the first ten years of her life as a performer at a roadside zoo in Pennsylvania. It wasn’t a good life at all and Fifi was forced to perform tricks to earn her private owner money. She wasn’t the only bear mixed up in this mess either. 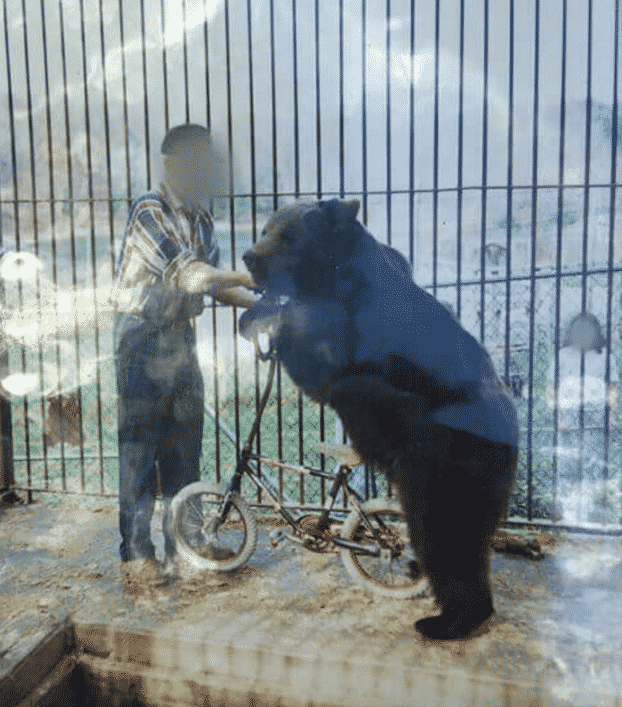 When the owner purchased Fifi he also purchased a male bear of the same species. The bear’s name was Bruno and he also was forced to perform sideshow tricks. This was their life for many years and the owner was not kind to them. 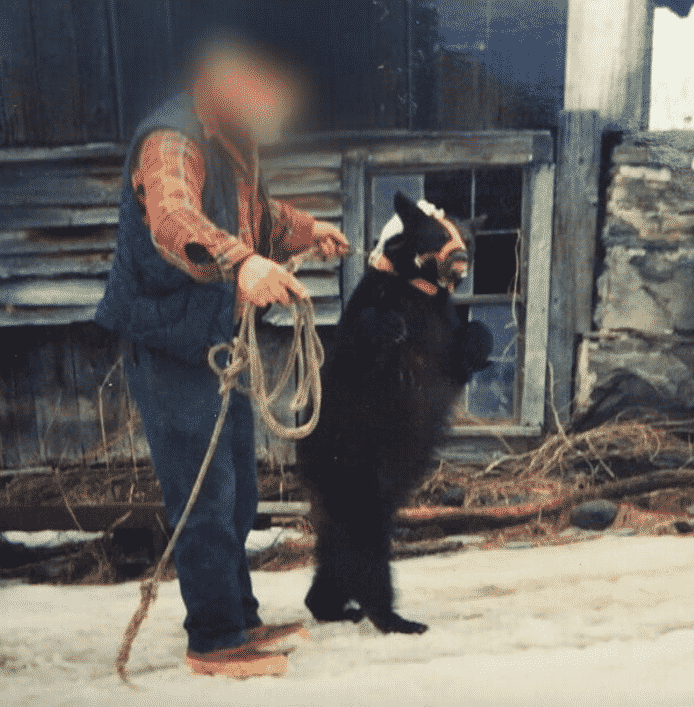 The duo suffered for ten years and the owner did not make things easy on them. He would force them to stand upright on two feet and he would often neglect them if they refused to perform in the ways he expected. Fifi and Bruno lived a hard life. 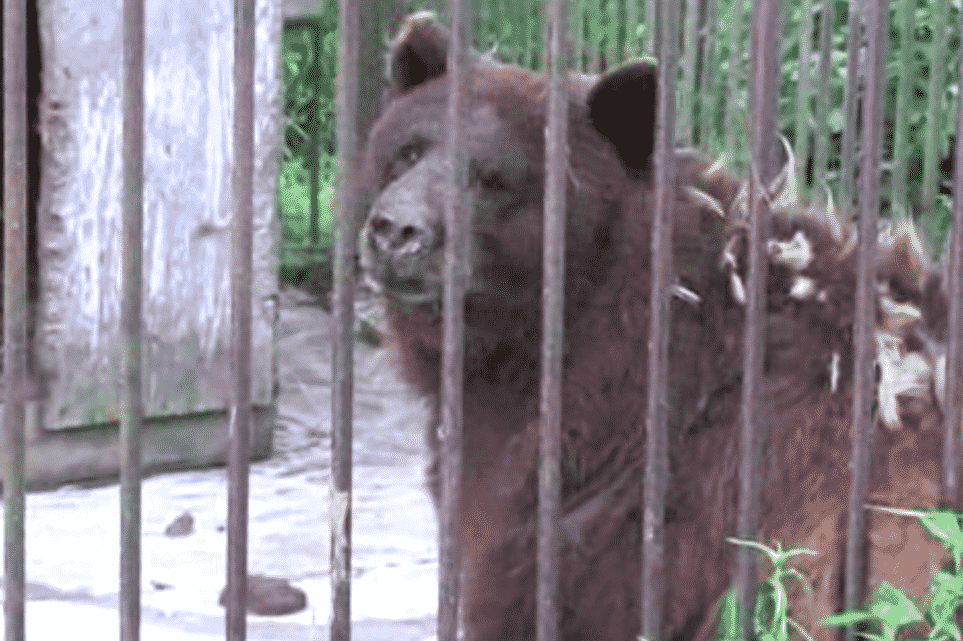 Eventually, the owner started to realize that the zoo wasn’t making as much profit as he liked. He was forced to close down the roadside zoo. However, this still didn’t spell a happy ending for Fifi and the others. 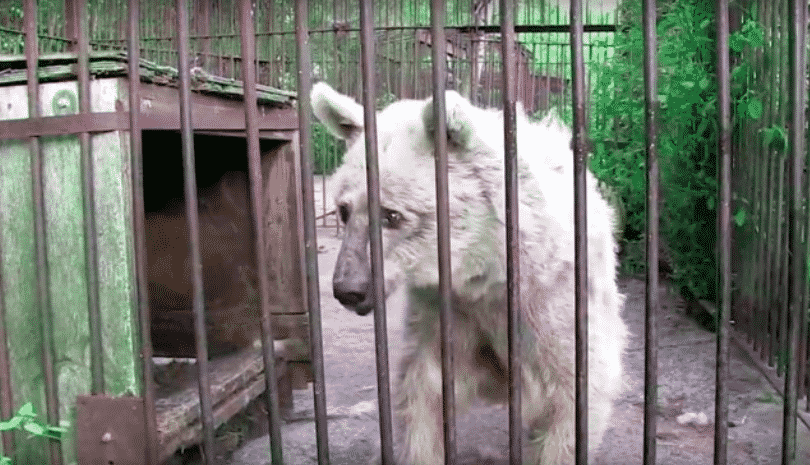 The zoo also started to face serious legal issues. Reports written on the zoo stated that the Big Bear Farm Zoo Park had violated many animal rights laws. Despite all of this, the bears still remained with the owner and lived in terrible conditions. 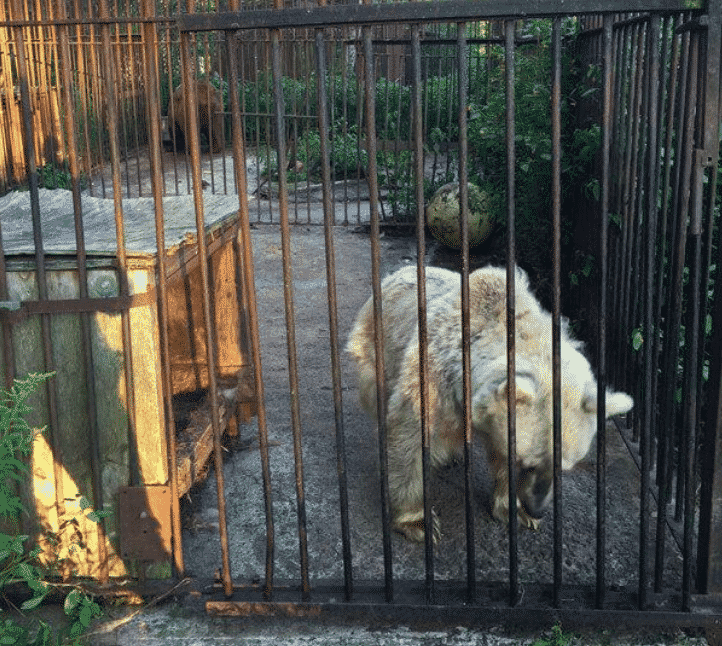 Fifi continued to live at the zoo inside of a tiny and cramped concrete cage. The Wild Animal Sanctuary posted about the situation on their Facebook account stating, “[They] had been kept in small concrete and steel-bar cages for 30 years. The four bears only had small rotted wood boxes to lay in.” 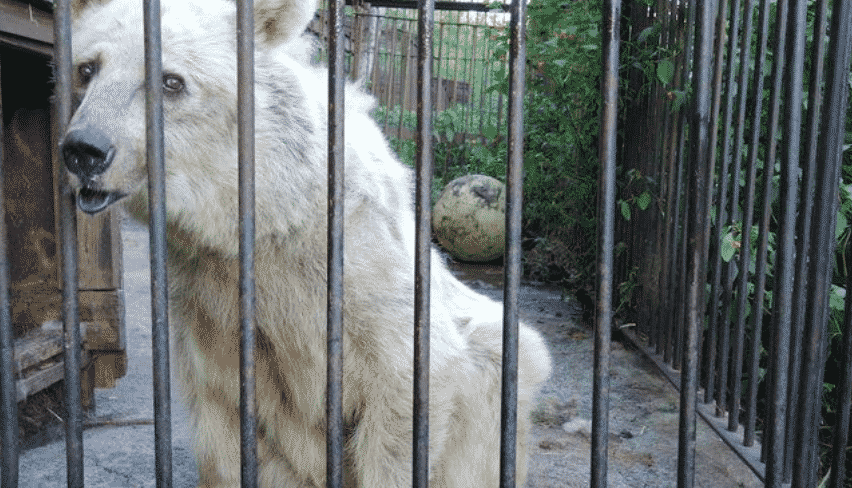 “But [they] were not large enough for the bears to fit into completely. Nor did they have an end wall to close off the box from winter snow and cold,” the post said. Fifi and the others were left to starve inside of the cages with no one around to help… 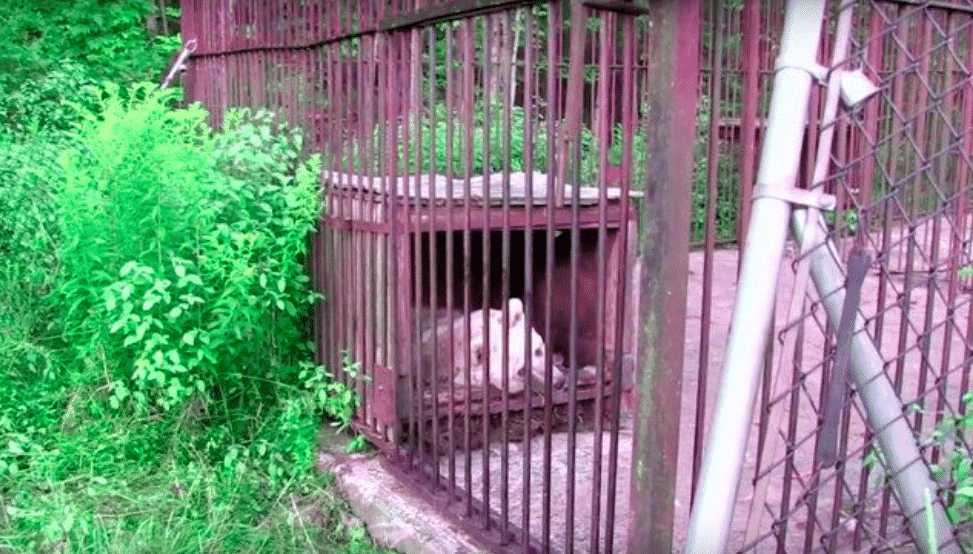 While locked up inside of the cages, the bears were unable to hunt, run, exercise, or do anything that would keep them healthy and happy. They were stuck in their own torment and word was getting out about the bear’s circumstances. 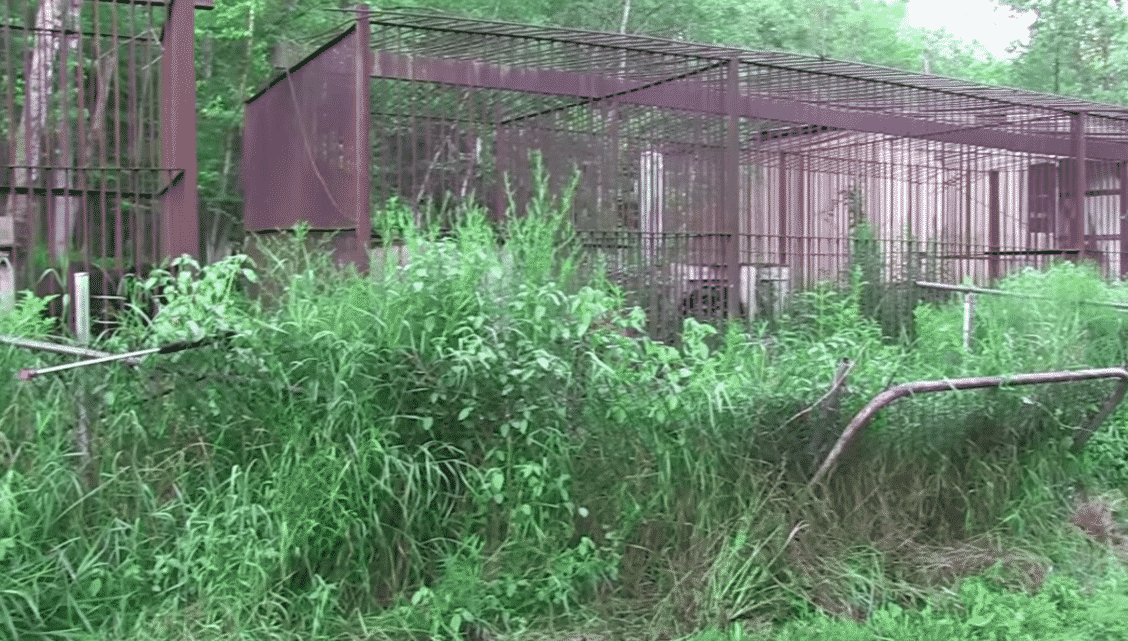 For years, animal rescue organizations applied pressure on the owner to give up the bears. He refused to budge until 2016 when he finally agreed to give the bears up to PETA. “They were so well hidden in the country. [No one even knew] they were there,” the sanctuary’s executive director, Pat Craig, told Inside Edition. 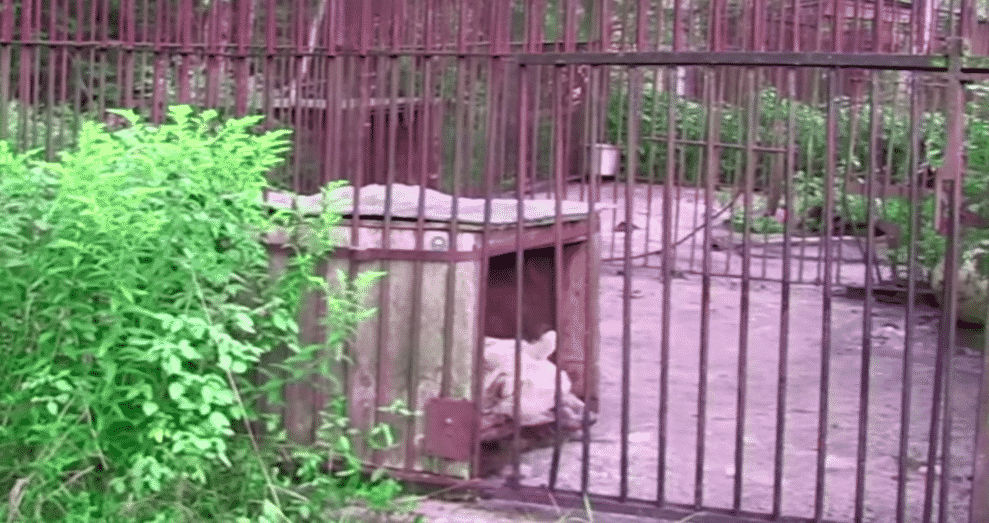 When he rescuers came to the zoo they were shocked at what they saw. Fifi was inside of her cage and she looked absolutely starved to death. Her body was wafer thin and there was dirt all over her coat. 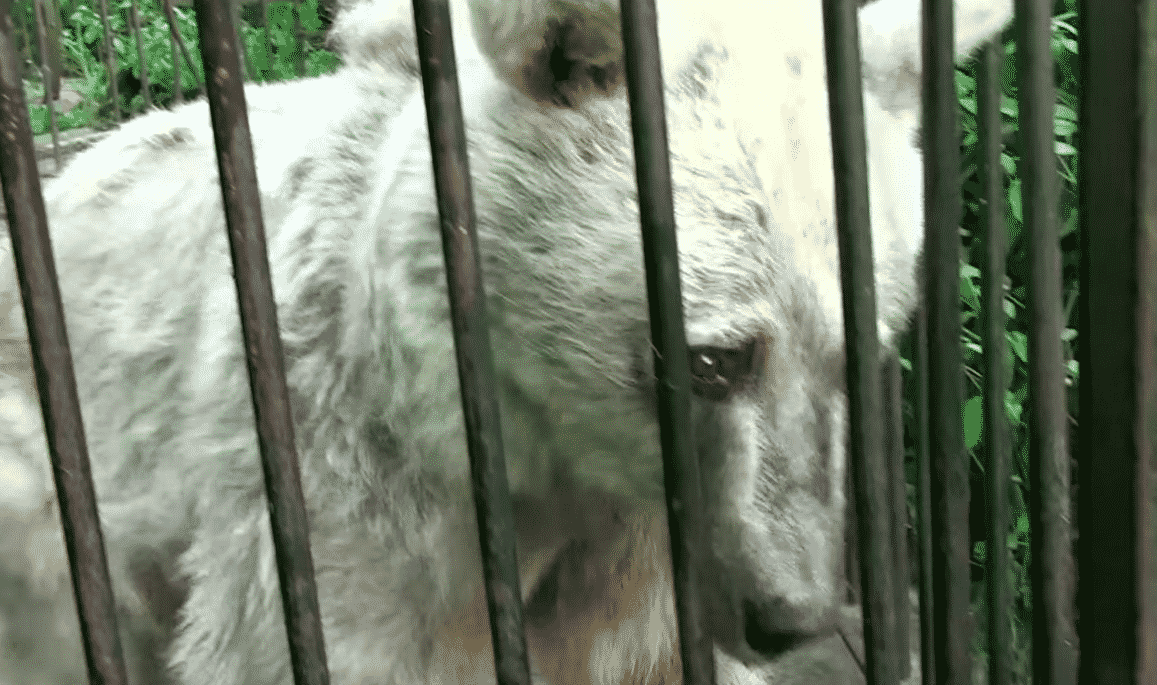 “Three decades of standing on a concrete slab with no chance to roam […] had taken their toll,” PETA wrote on their website. Fifi’s eyes showed how much pain she was in as they looked so terribly sad. The rescuers quickly went over to examine her to see the damage. 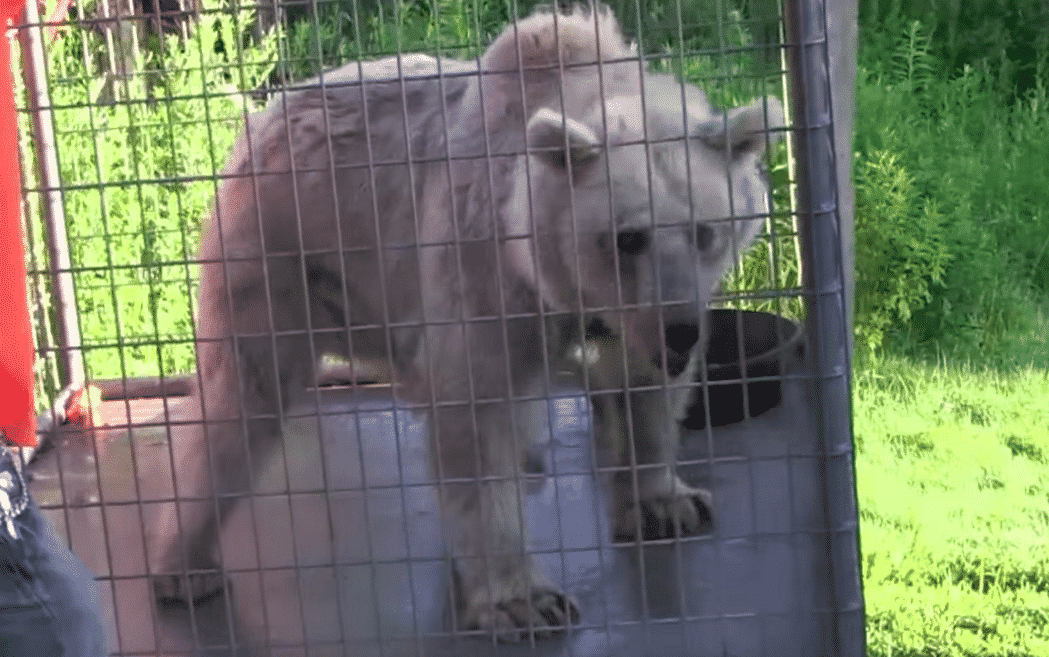 “Fifi suffered from painful arthritis in her rear legs and was severely underweight. Her coat was thin and unkempt, and her eyes were sunken in,” PETA wrote.“We didn’t know if she could bounce back.” 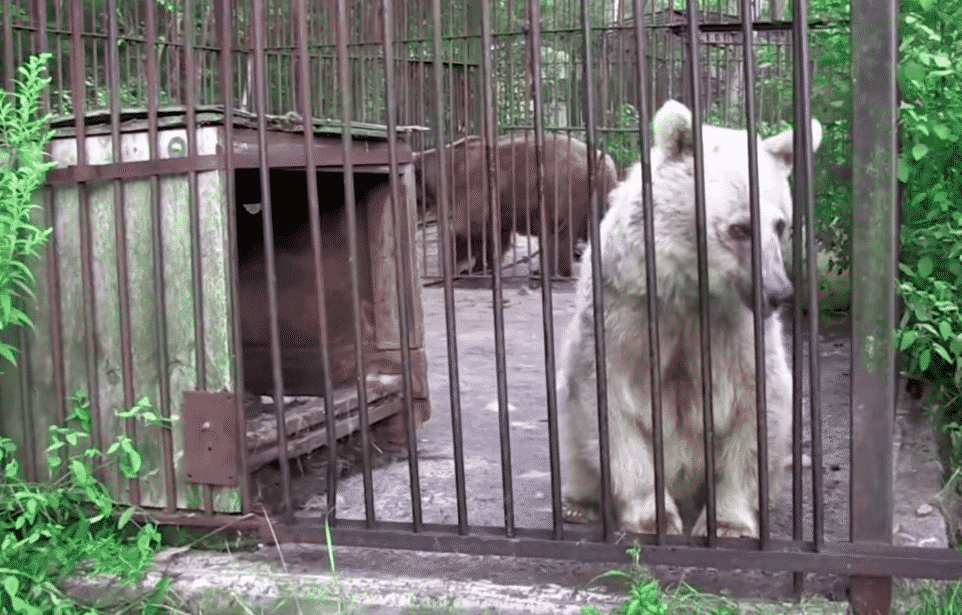 “Their owner felt they shouldn’t hibernate and made sure they stayed awake each winter for decade (this is extremely detrimental to the bears’ health and well-being),” the Wild Animal Sanctuary wrote. Finally, at 32-years-old, Fifi was pulled out of her cage and relocated. 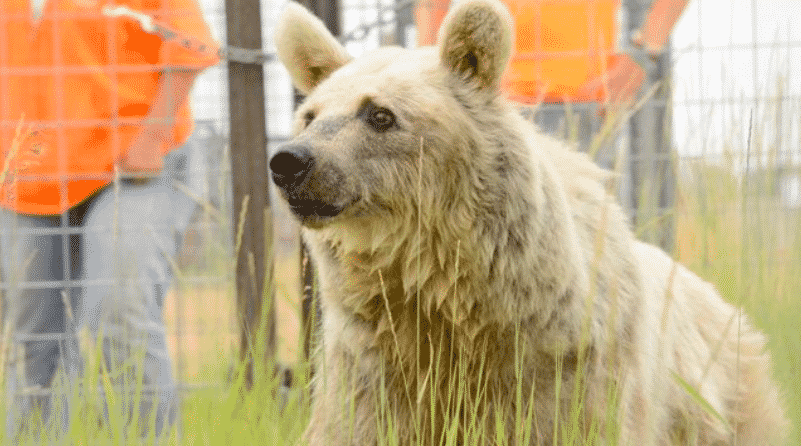 After 32 years of confinement, Fifi was relocated to the Wild Animal Sanctuary in Colorado. At the sanctuary, Fifi was finally given a proper diet and given tons of space to run around and roam. In just a few months, Fifi’s appearance and demeanor completely changed. 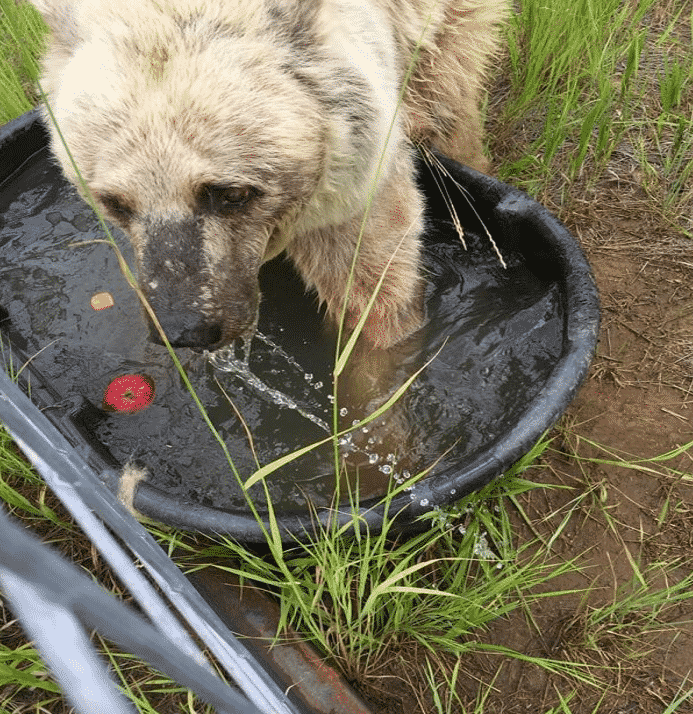 “The first three or four steps [Fifi] took when we let her out of her transfer cage, she got into the water tank,” Craig told Inside Edition. Fifi was looking happier and acting it as well and everyone at the sanctuary was excited to see her further transform. 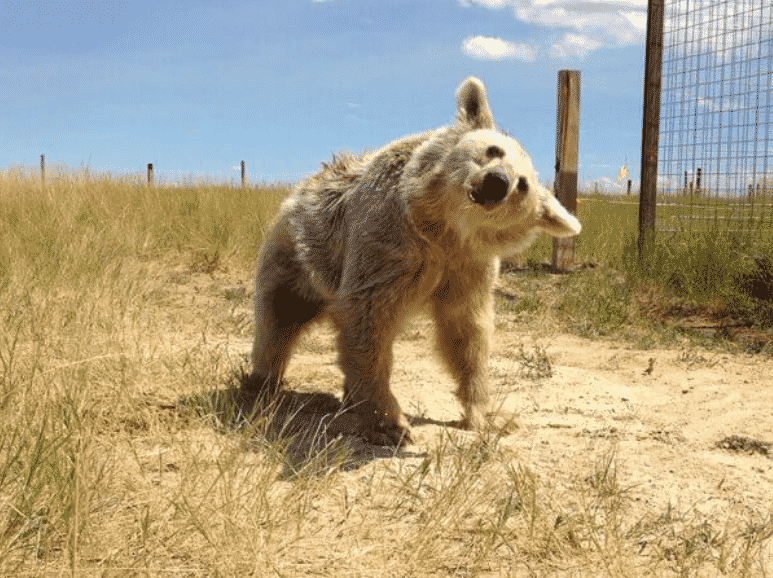 “[We knew] her spirit was going to soar really quickly. [Although her] body was going to take a while to catch up,” Craig explained. The months passed by and the healthy eating and living started to really transform Fifi more and more. 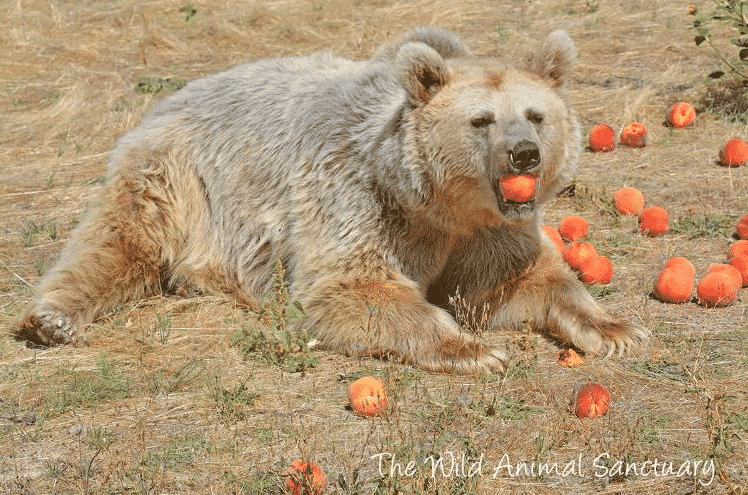 Now a year later, Fifi is happy and pudgy just like she should have been. She loves being at the sanctuary and also has a new favorite food: peaches! Another miraculous thing is that Fifi has been learning how to hibernate as well. 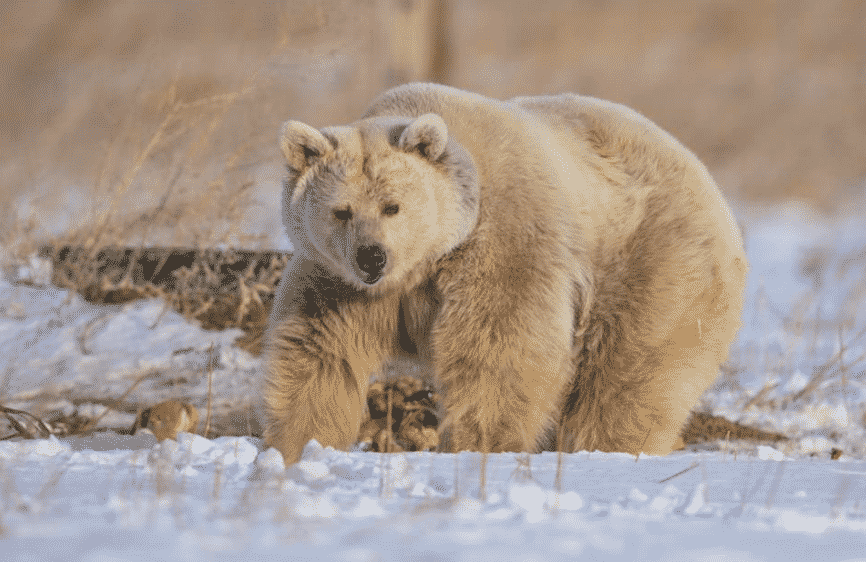 This past winter, Fifi and the other bears spent the winter hibernating. They slept through most of the winter, however, they would pop out every once in a while to make sure everything was still ok. The rescuers have reassured everyone that this behavior is to be expected. 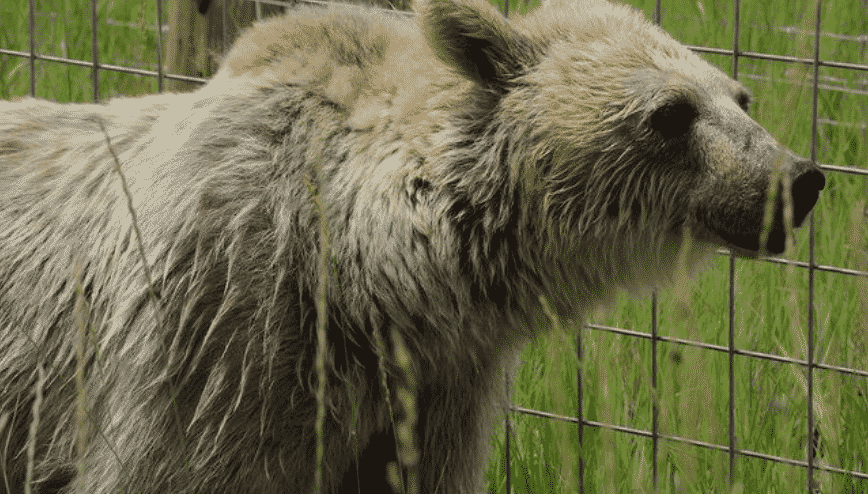 “This is very normal the first year a rescued bear tries to hibernate, and the behavior will not repeat the second year, since they will have mastered the concept,” Wild Animal Sanctuary said. For now, the bears are enjoying their lives and having the time of their lives. 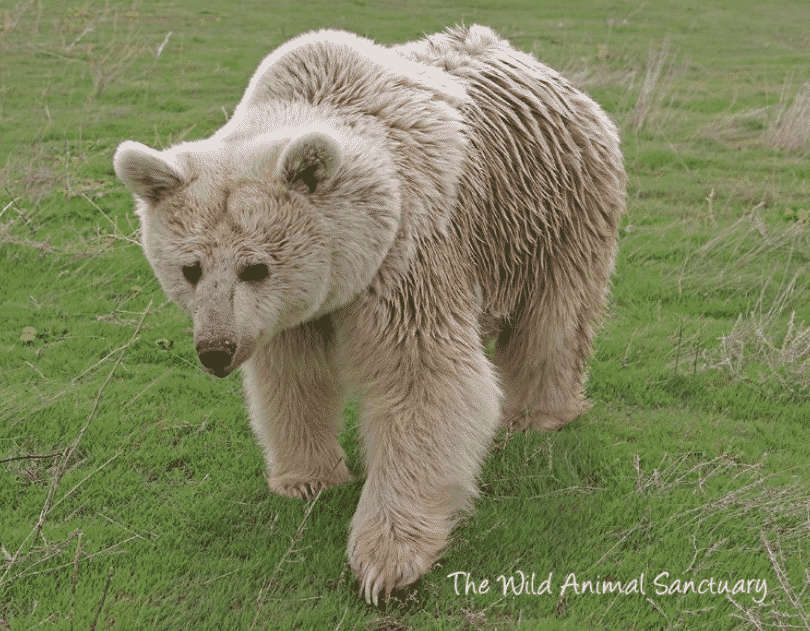 “We are thrilled to see how big and beautiful Fifi is,” Wild Animal Sanctuary wrote. Fifi finally has freedom and tons of food to enjoy for the rest of her life. Talk about a great happy ending.