Kathryn Birster and her husband were absolutely devastated when their dog of nine years passed away. The couple loved their dog dearly and considered him a part of the family. Since they were so close to their dog they had no real plans to adopt again. Life, however, had other plans for them and it all began with a Facebook post. 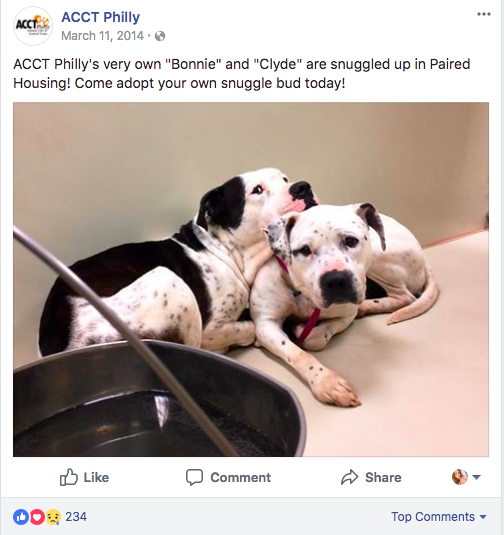 Kathryn Birster was scrolling through her Facebook timeline when she noticed a post that she couldn’t ignore. The post came from the Animal Care and Control Team of Philadelphia. The details in the post and the picture immediately intrigued her… 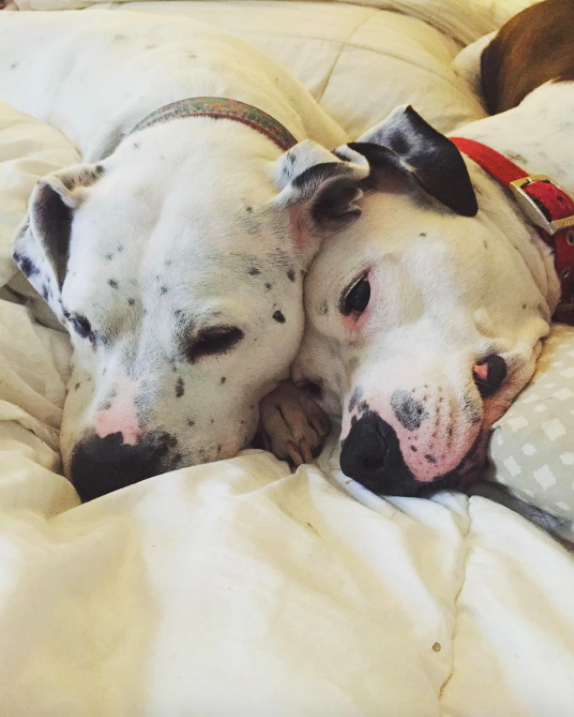 The Animal Care and Control Team of Philadelphia were in dire need of a forever home for two dogs. These were no ordinary dogs as they were a pair of pit bulls that were incredibly bonded and could not be pulled apart into separate homes. 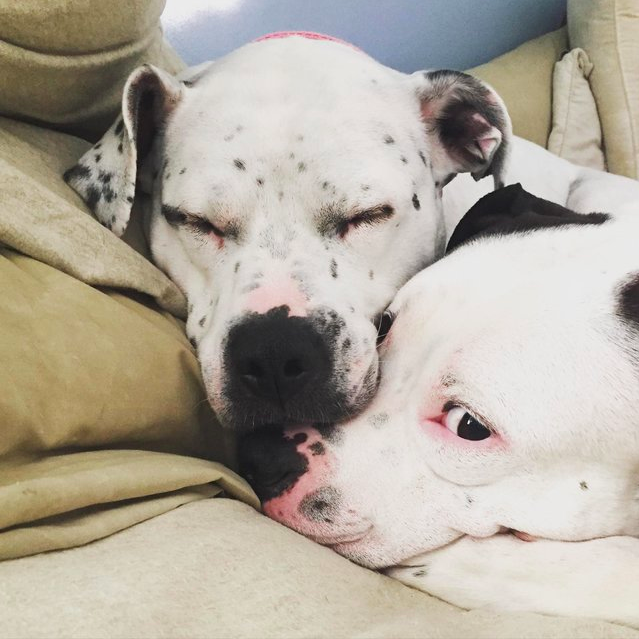 While the organization was able to generate a lot of interest for the male pit bull, the same energy wasn’t reciprocated for the female. As Birster scrolled through the comments, she quickly grew concerned about the dogs. 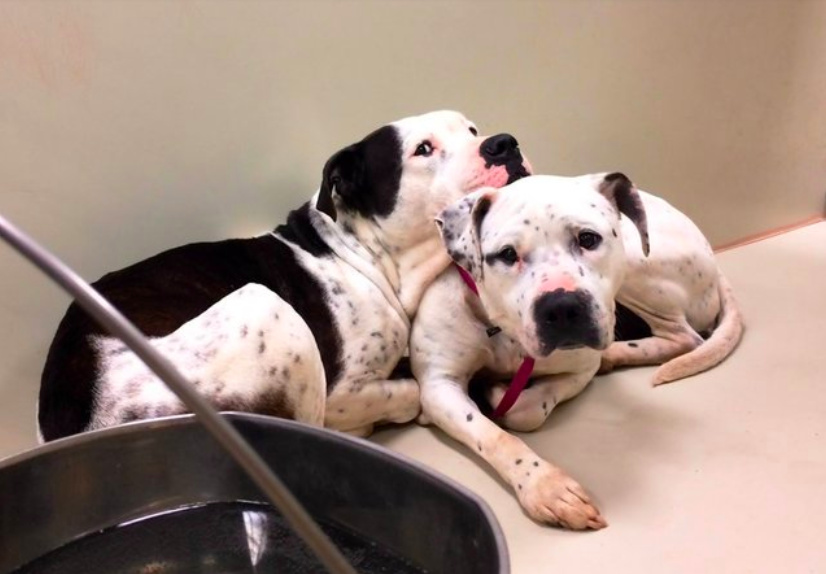 As she continued to scroll through the comments, Birster knew that something had to be done. She began to consider all of the options and thought that she should take it upon herself to possibly be the person that would make a change in the dog’s lives. 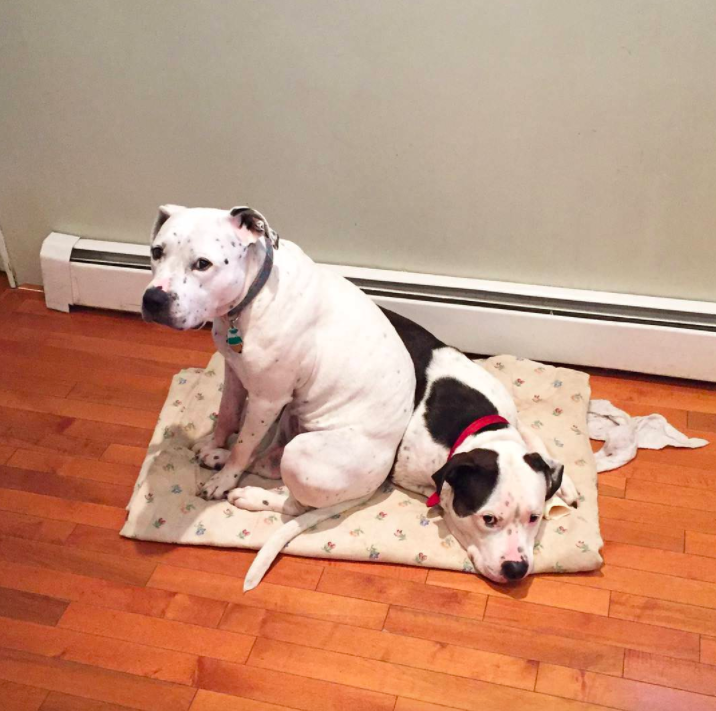 “I was watching all of this play out on Facebook and my heart was breaking all over again that these two who clearly needed to be together might be separated,” Kathryn told The Dodo. 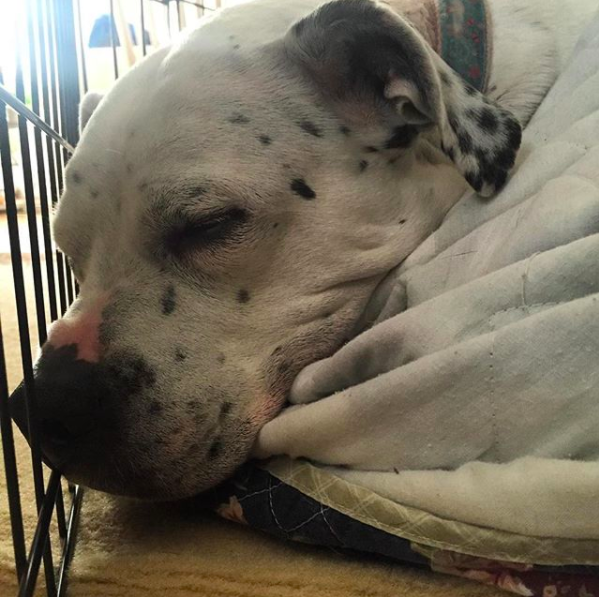 “I sent the photo to my husband, and we talked about it for a few days,” Kathryn said. The couple was torn between the decisions. After all, the timing couldn’t be worse… 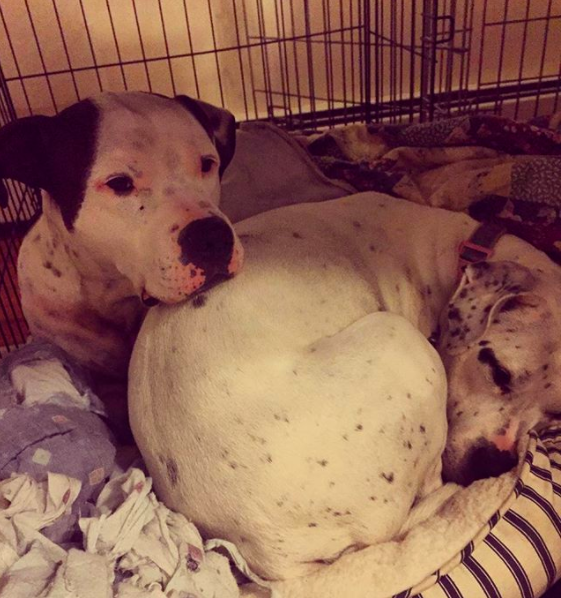 “[They] were a bonded pair of dogs surrendered by their owner in March 2014. The day after they were surrendered to the shelter, our own dog of nine years passed away. It was the worst time of my life and my husband and I were destroyed,” Kathryn Birster told The Dodo. 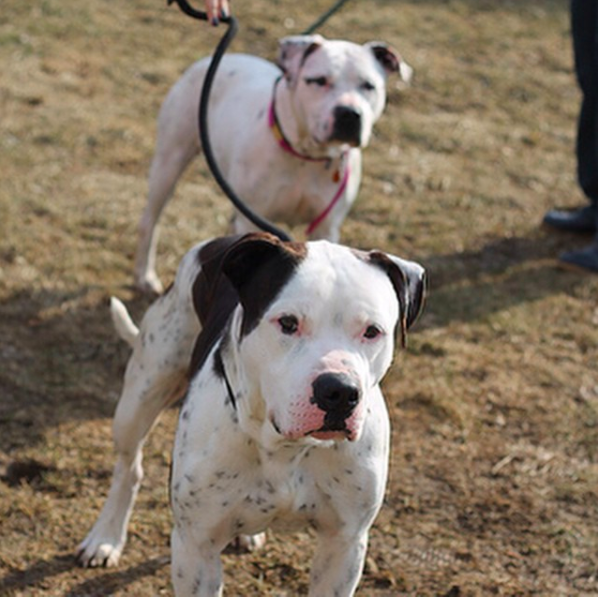 “He was not just our dog, he was our child. We were absolutely not looking to adopt again any time soon.” The couple really wasn’t ready but at the same time, they felt like they couldn’t just leave the dogs alone without care. Maybe a visit with the dogs was what they needed. 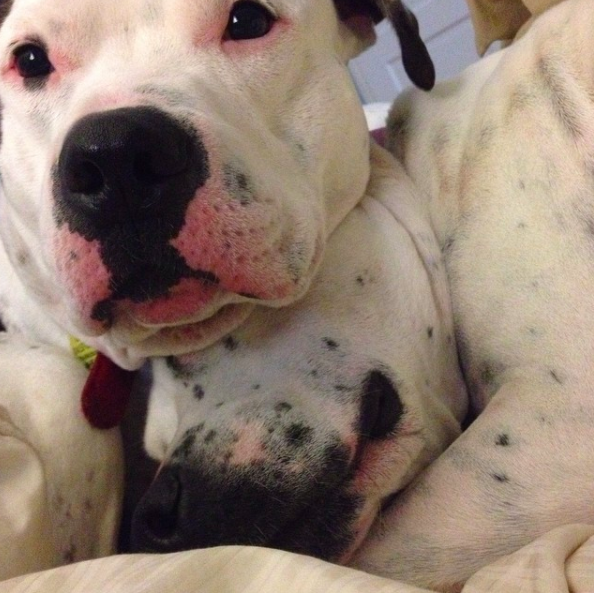 The couple finally made their way over to the ACCT Philly shelter on March 14, 2014. There they met the two pit bulls and realized just how much of a connection all four of them had. The Birster’s were absolutely in love… 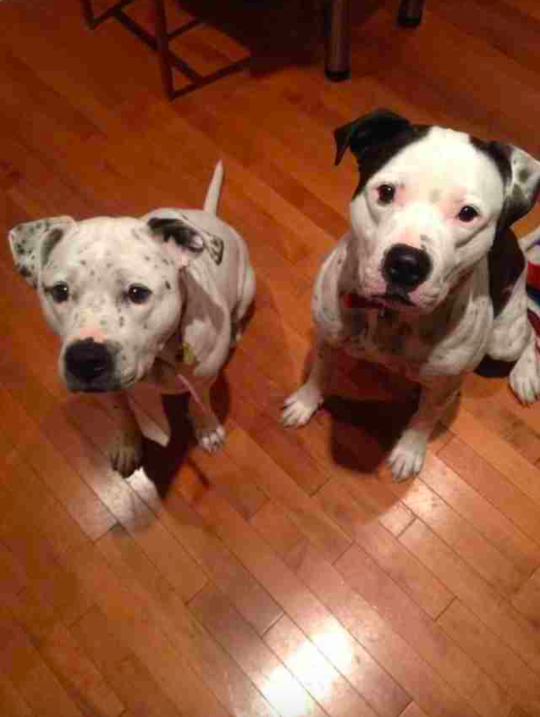 “After spending some time with them, we knew we couldn’t leave them behind, and we (tearfully) completed the adoption process, bringing them home that night,” Kathryn said. 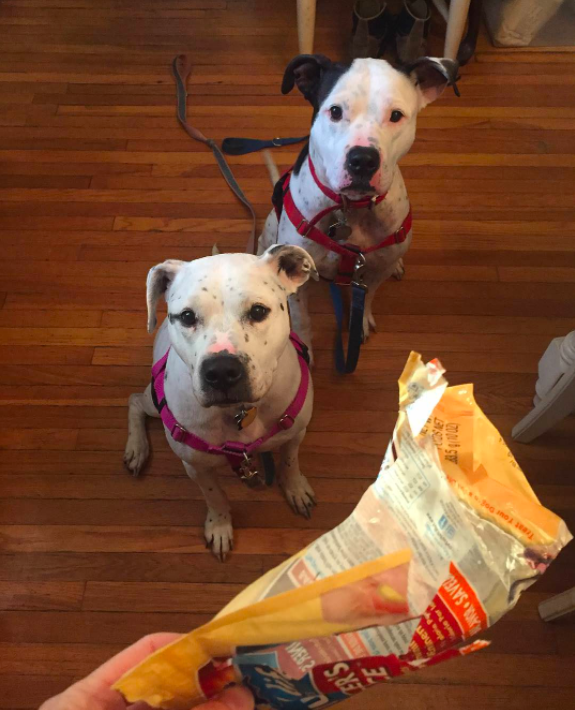 The Birsters adopted the two pit bulls and quickly gave them some new names. The dogs were now named Gus and Nina. They quickly adjusted to their new home. The pups were energetic and so much fun to be around and the Birsters were super excited as well. 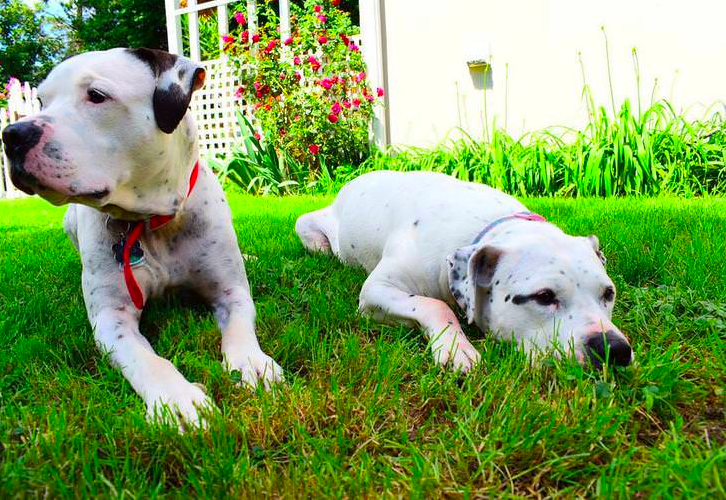 “I know now that Gus would have been a complete wreck without Nina. She’s his comfort and his grounding,” Kathryn said. Kathryn continued to describe the interesting relationship between the two. 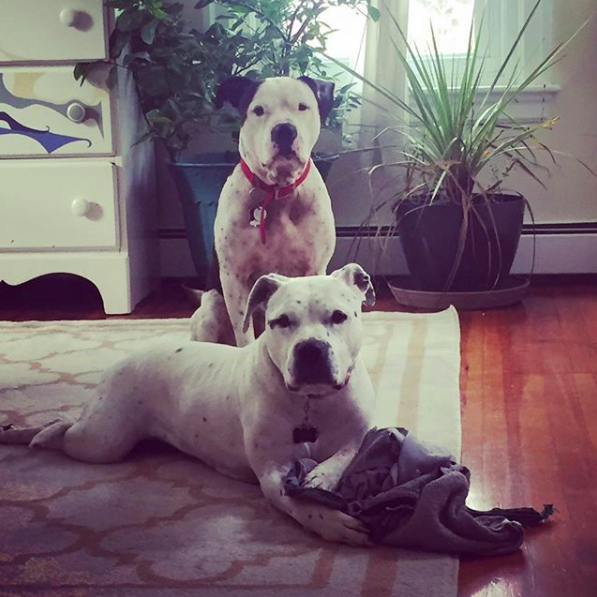 “If he’d been adopted or fostered without her, he would have always, always been searching for her. Nina’s a bit more independent, but she would have lost her play companion.” The couple were now even more certain that they had made the right choice in keeping them together. 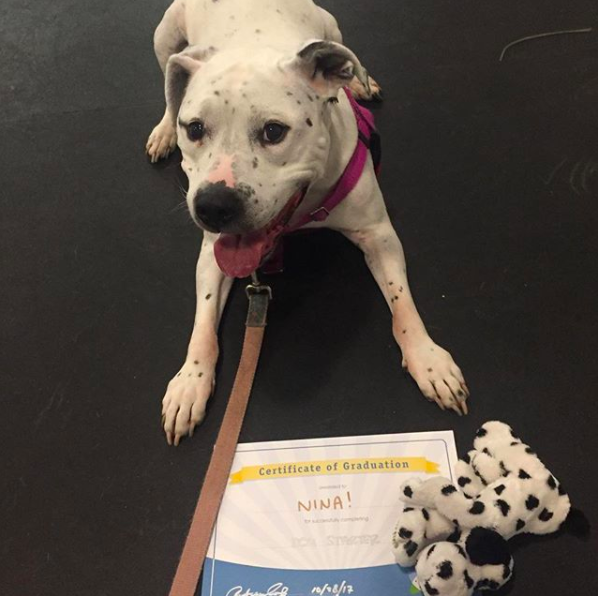 “It was 1,000 percent worth it for us to keep them together,” she added. “And my husband and I are completely in love with them and can’t imagine life without them!” Finally, the dogs had a forever home where they would be loved and taken care of. 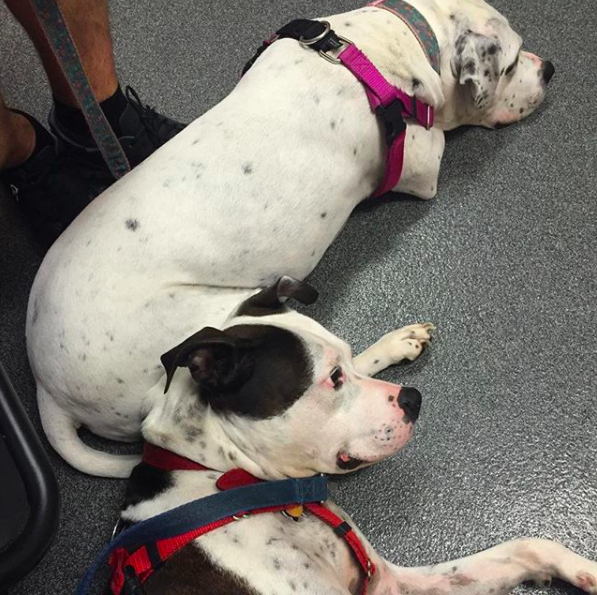 It’s been three years now since the pups were adopted. The Birsters are still just as happy with them as they were on the day they adopted them and the family now feels complete. The four of them truly make a great family. 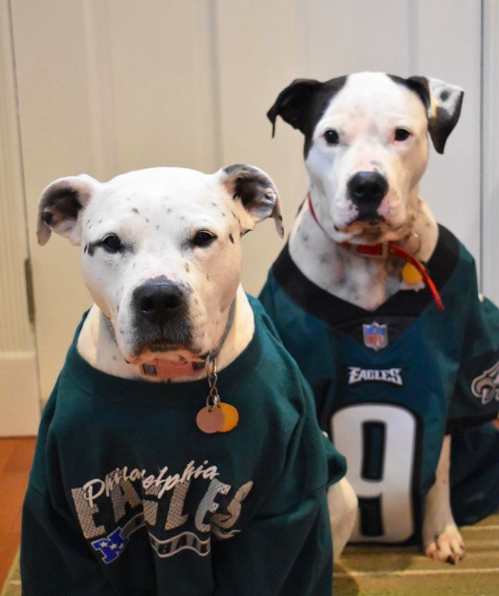 “They’re now 7 and 6. They go running with us, hiking, and we’re constantly trying to figure out new puzzles to stump them because they’re both so smart,” Birster said. The dogs are always having fun with the couple and playing along in all sorts of ways! 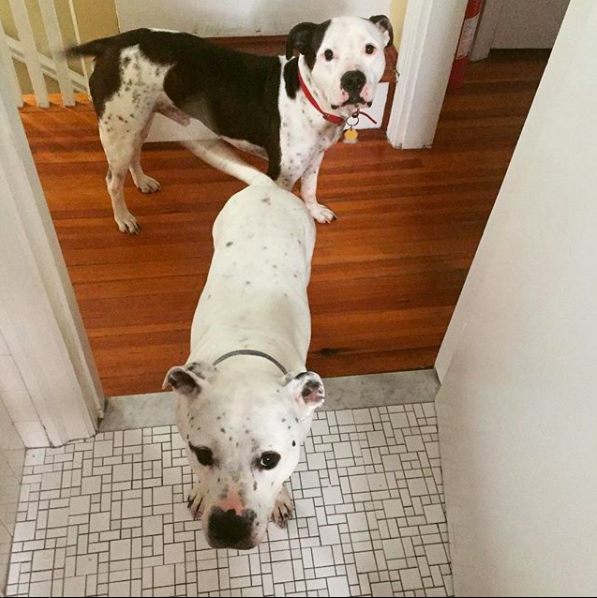 “They’re really fun and funny and have different personalities, but they absolutely go together and are a pair,” Birster added. The dogs do everything together so the Birsters decided to document it for the world to see! 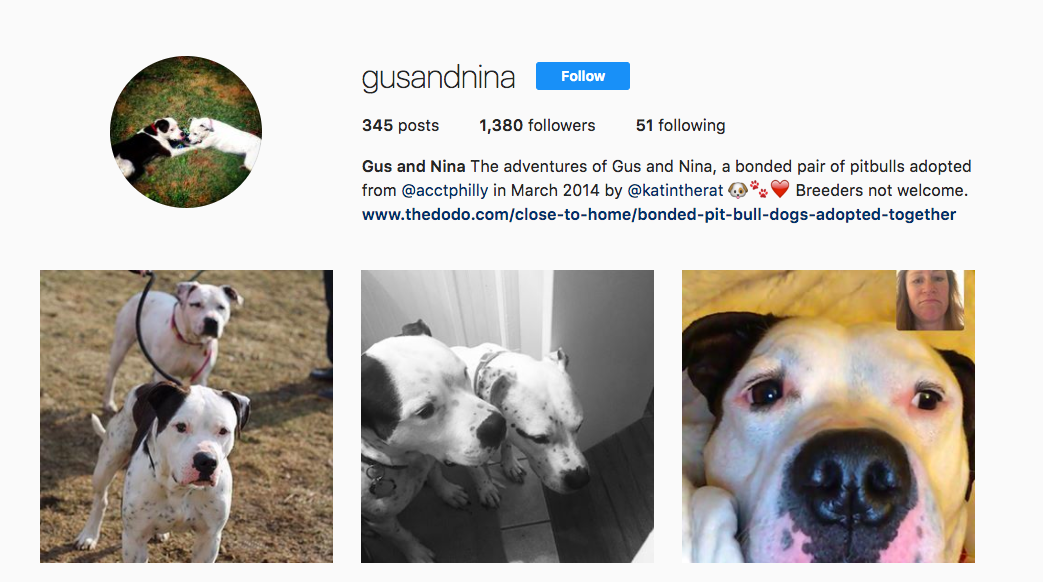 The Birster’s decided to create an entire Instagram page devoted to the pups. On the page they upload photos of their daily activities with the dogs and their various play dates. While the dogs absolutely love running, they also love something else even more! 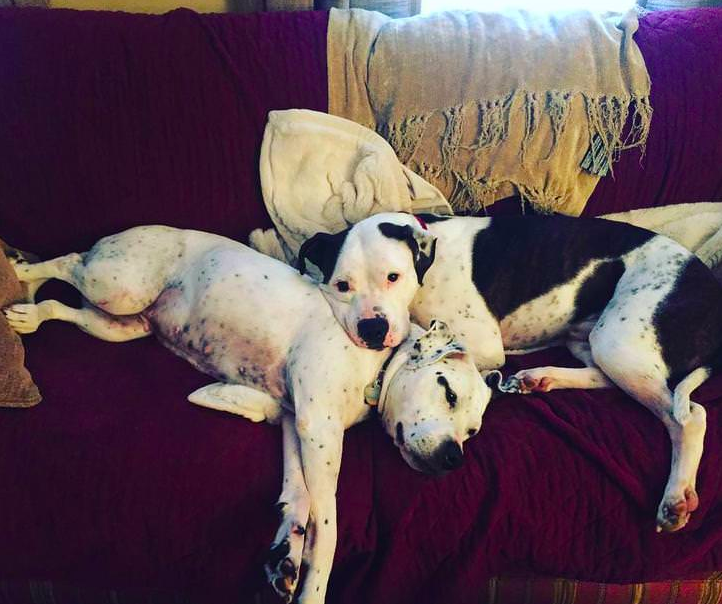 Nap time is a great bond that the dog’s share! These two absolutely love cuddling together on the couch. The Birster’s often catch them cuddling in the cutest places together. 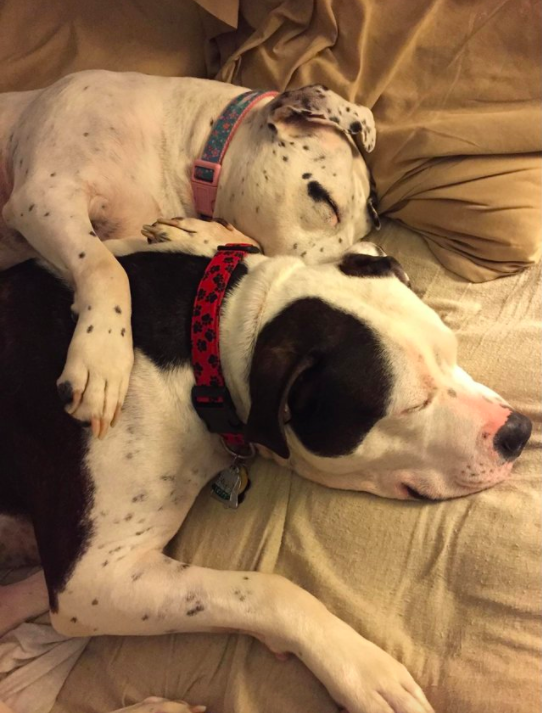 Thanks to the Birsters, these two dogs now get to lead wonderful lives. Nina and Gus have found a home and parents that love them. They both are able to stay together making it a truly happy ending for everyone.