Park Ranger Comforts Gorilla Who Just Lost His Mother, And His Reaction Is Heartbreaking

Grief and suffering are both deep emotions that aren’t exclusive to the human experience. This was recently proven true when a photographer snapped a photo of a truly emotional moment. Your heart will break at this baby gorilla that was mourning his mom’s death. 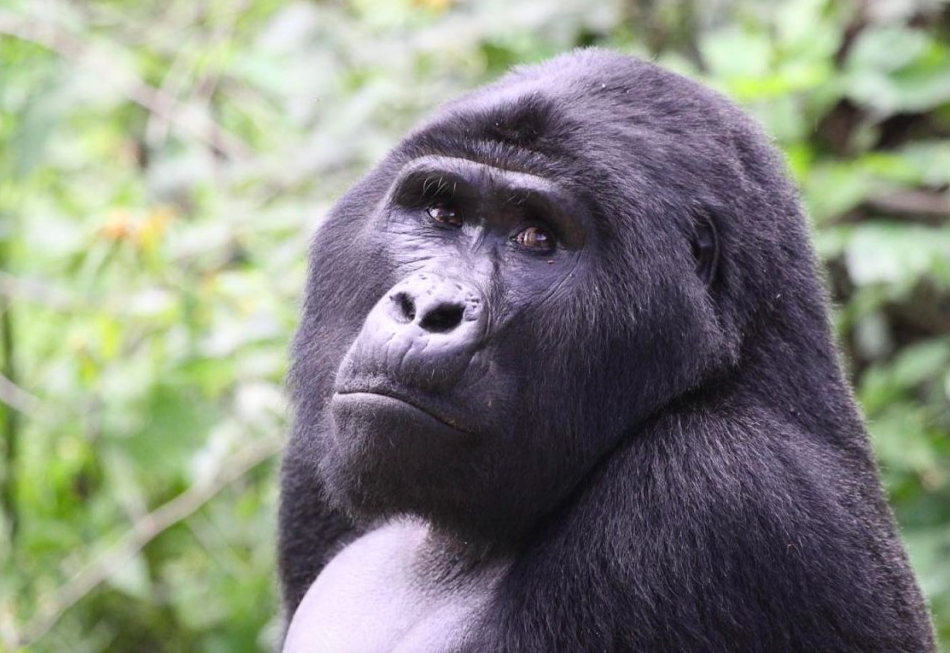 Gorillas are one of the four species of great apes that are closely related to humans. Gorillas are capable of walking upright, have no tails, and actually have larger brains that are capable of processing so much more than the average monkey. These apes are also in danger of declining in population… 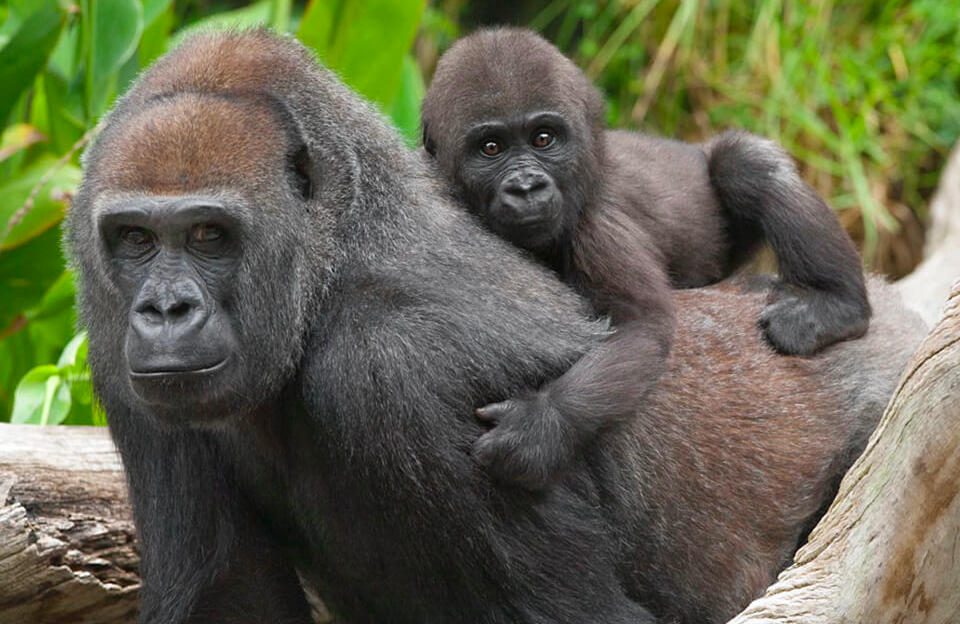 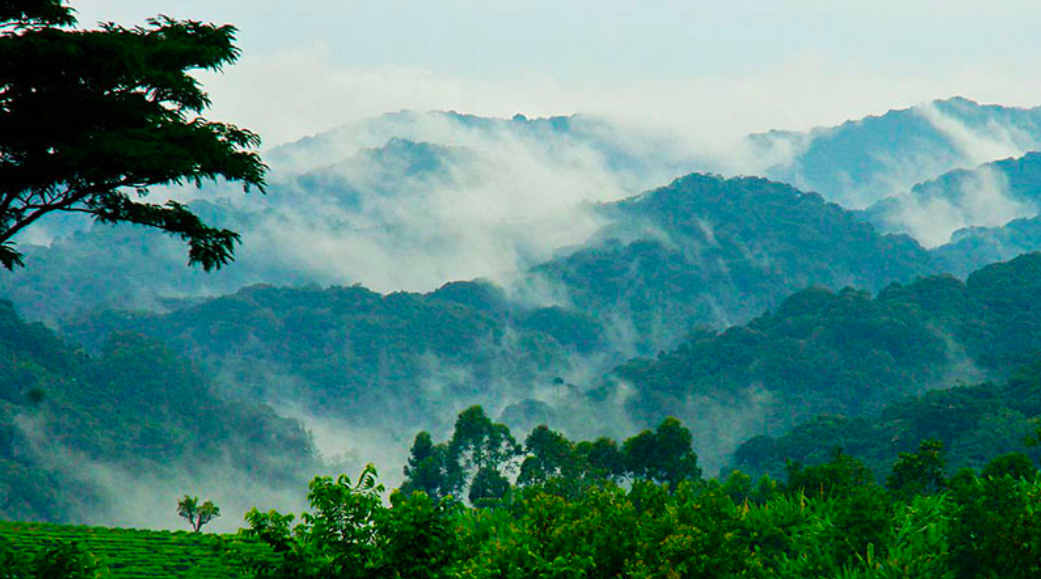 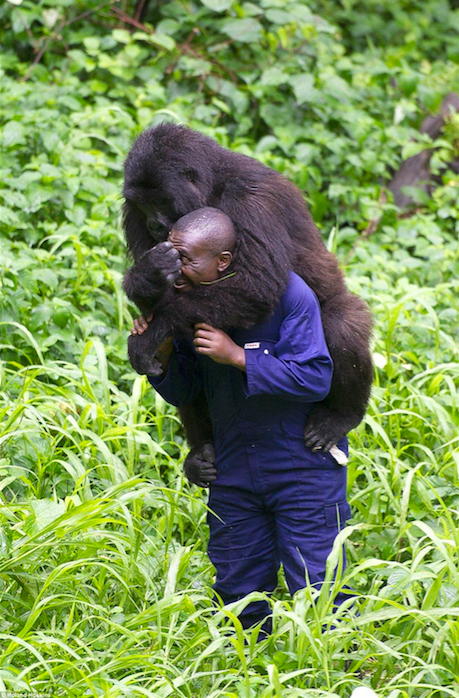 Patrick Karabaranga is a park ranger at the Virunga National Park. The national park is the oldest one in Africa and is actually home to 880 mountain gorillas. This is about a quarter of the mountain gorilla population. 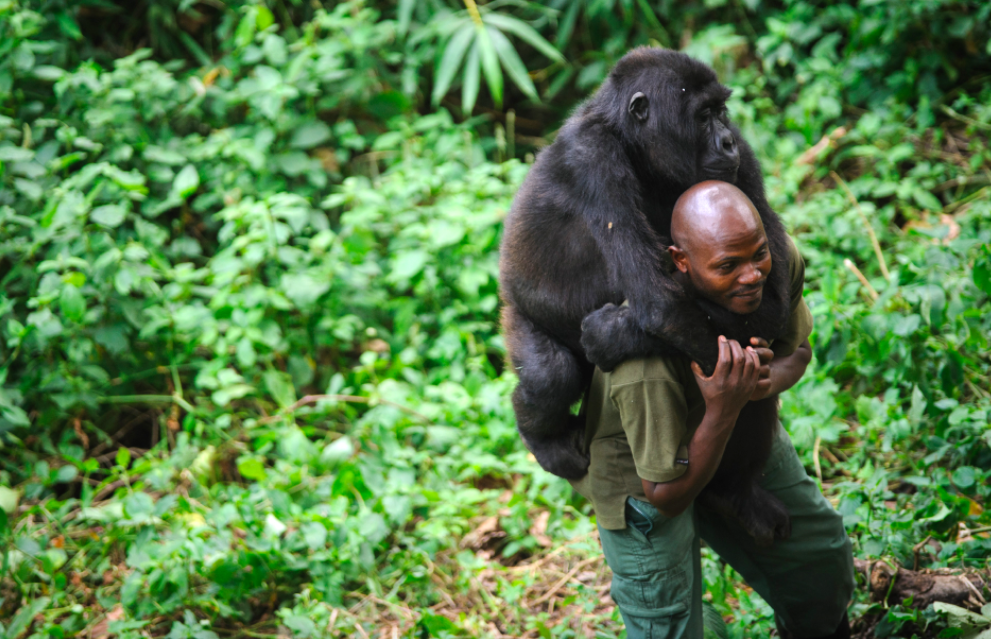 Karabaranga is one of many dedicated park rangers that work to protect the gorillas in their natural habitat. He often puts his life on the line due to infiltrations from poachers and traffickers that attempt to attack the gorillas. Then one day an attack occurred that blindsided the park… 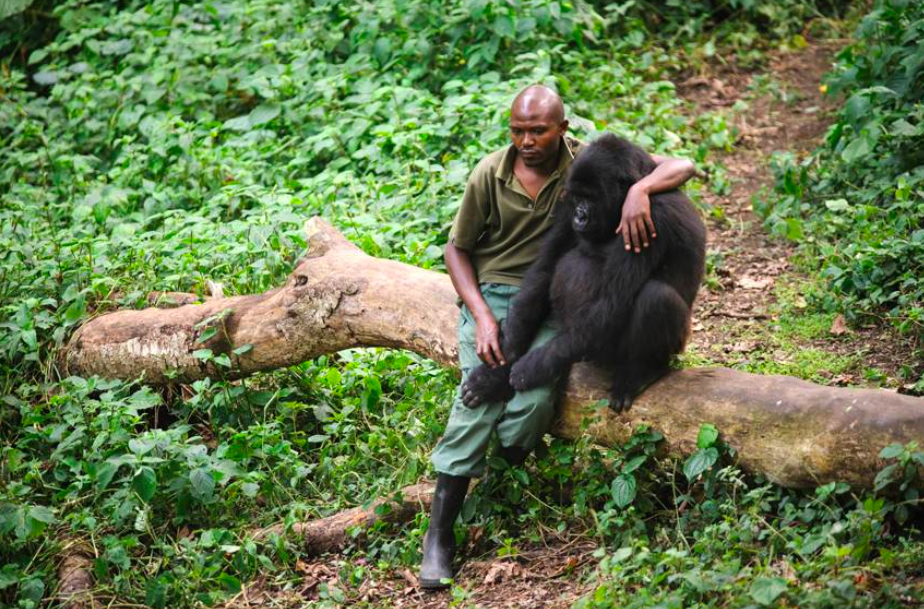 A photo was quickly snapped of Karabaranga placing his arm around a young gorilla that was filled with sorrow and grief. The compassionate moment between Karabaranga and the gorilla broke the hearts of everyone that saw the photo. You see, the young gorilla was mourning the loss of his mother… 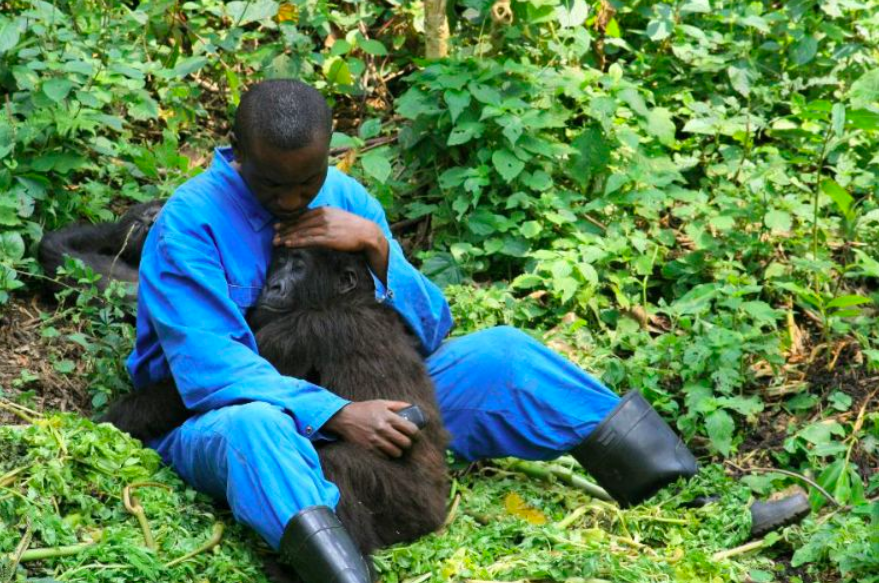 The young gorilla’s mother had been attacked and killed by poachers. He and two other orphaned gorillas were brought into the park because their parents had been killed. As you can see, the young gorilla was searching for comfort in Karabaranga as he placed his hands on top of Karabaranga’s legs. 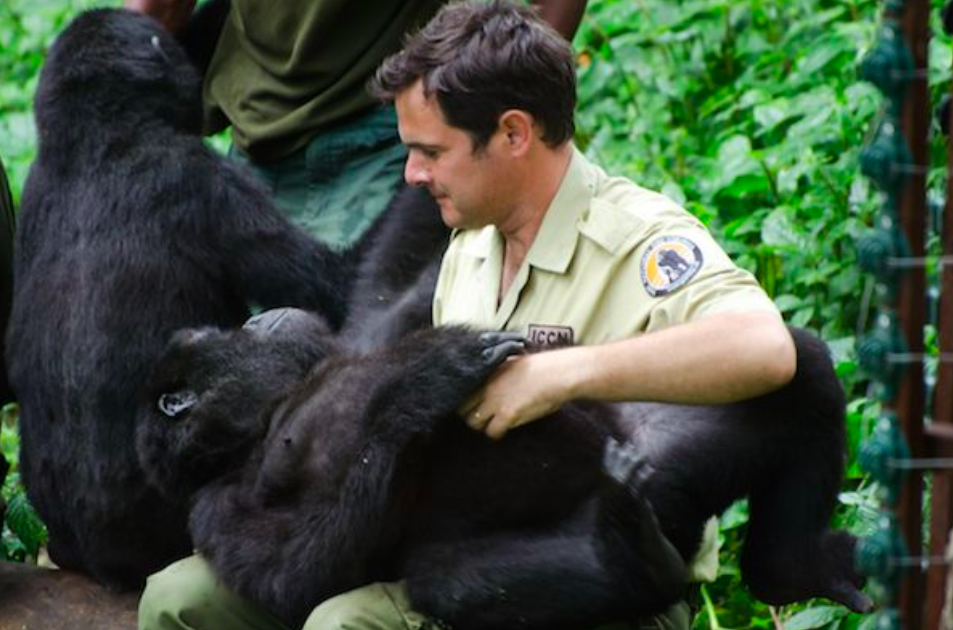 “They had a very difficult start to life […] They were recovered from poachers, from the bodies of their mothers after their families had been attacked,” Chief Warden Emmanuel De Merode said in a statement. 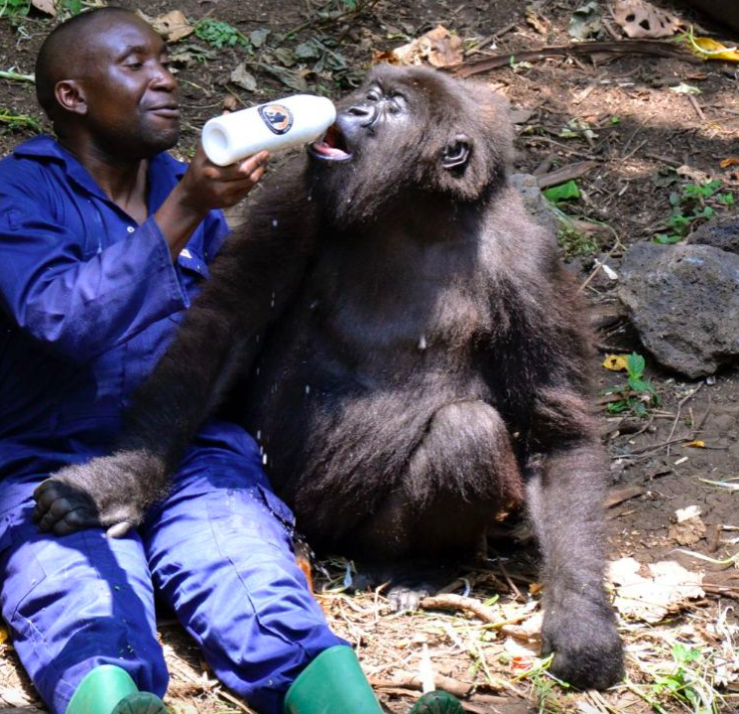 The fact of the matter is that the survival of these three gorillas was a miracle in itself. De Merode stated that it was “pretty miraculous. Baby gorillas of that age very rarely survive.” The park is now working hard to keep them alive and well. 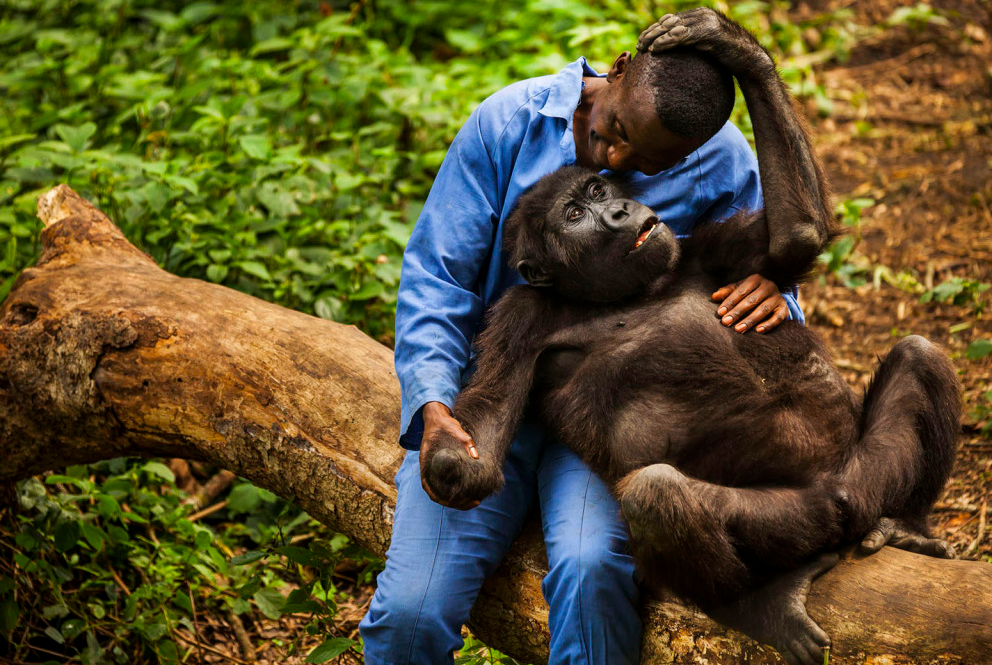 “There are a number of main threats. Obviously now, we’re very worried about the state of [Congo’s civil] war that we’re living through. The gorillas could end up in the crossfire. It’s happened before, and it could happen again,” says De Merode. 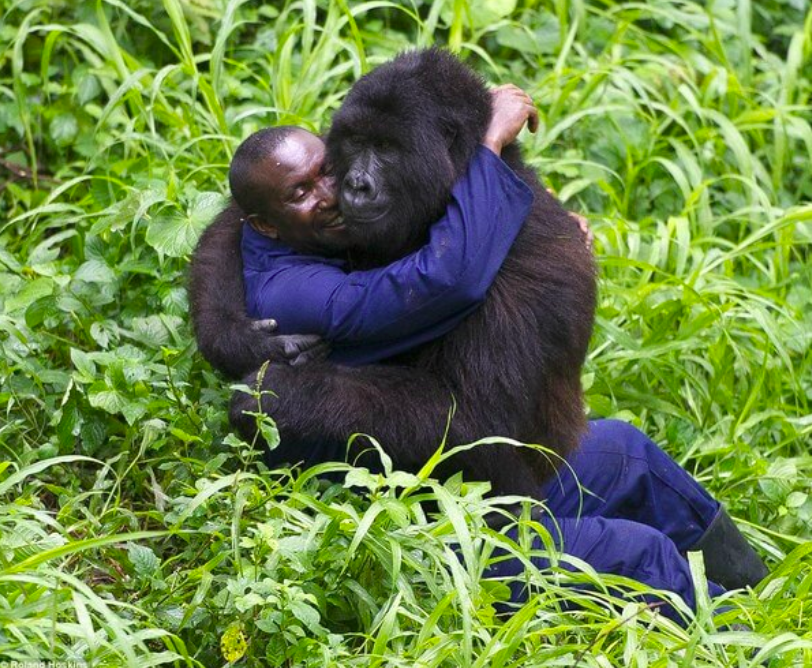 The civil war going on between the rebel forces and the Congolese Armed Forces affects the lives of everyone, including the park rangers. There have been over 100 park ranger deaths in the midst of the warfare. The rangers dedicate themselves wholly to the preservation of the animals and park. 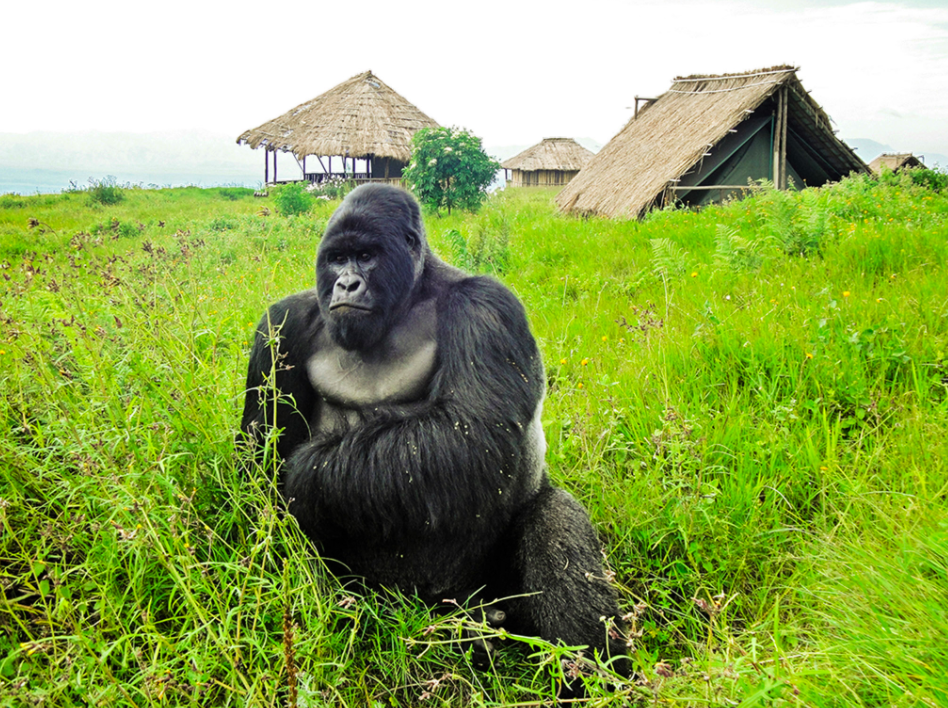 De Merode says, “[The park] is absolutely exceptional. If we lose this park, we’ve lost something that can never be recovered. And so it does require a huge commitment and a huge sacrifice to protect it.” 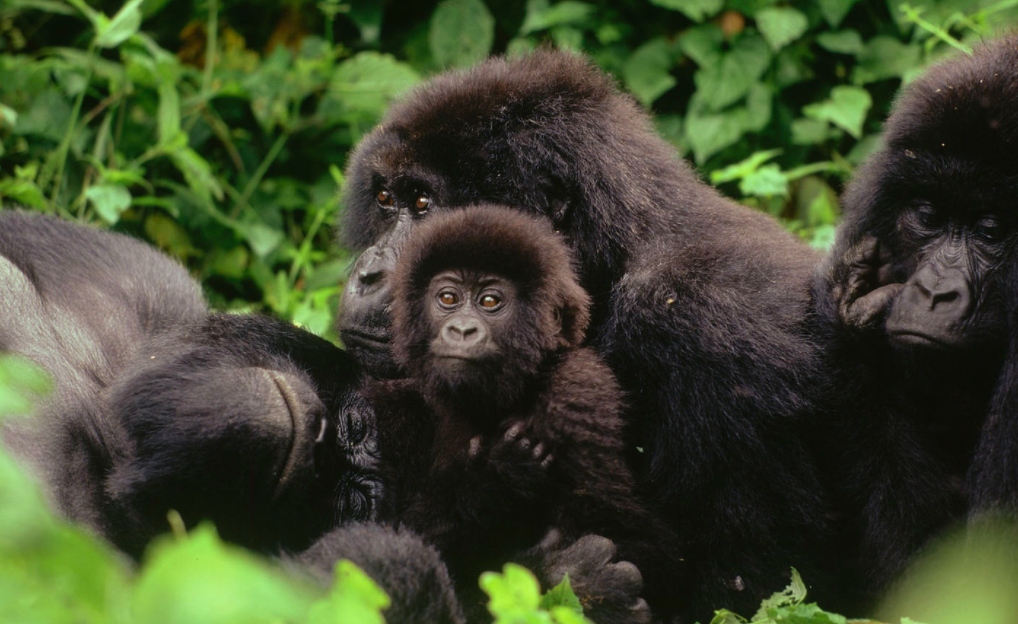 So the park rangers go above and beyond to keep the park running and keep the gorillas safe and happy. The dedication is unparalleled and all of the rangers understand that the job could cost them their lives. However, they still continue to show up to work day after day. 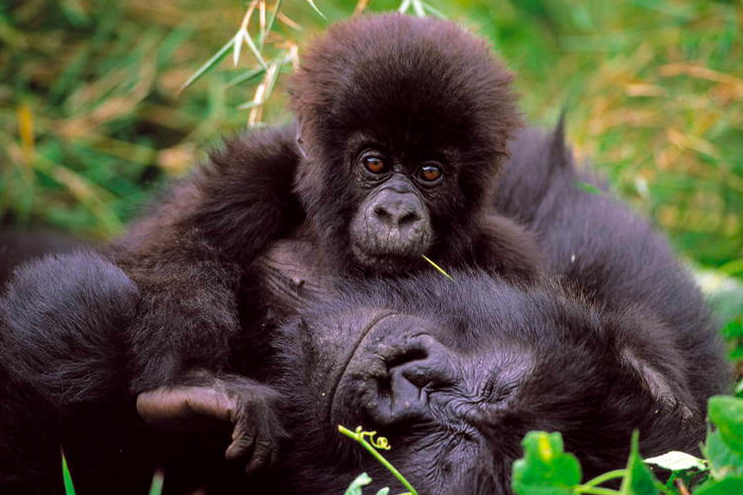 De Merode has often praised the character of the gorillas. The gorillas, he says have many of the same qualities of humans except “without the failings.” He and his rangers are proud to risk their lives in order to continue protecting them. 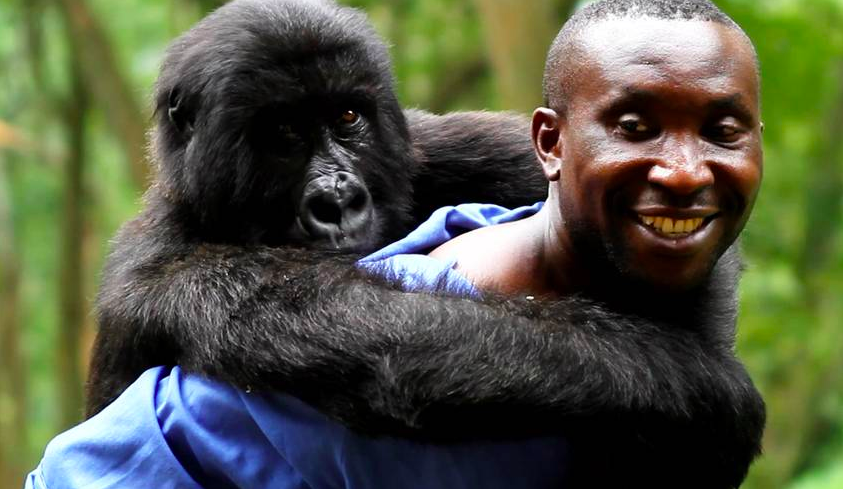 “They’re absolutely wonderful animals,” De Merode stated in an interview. When the baby gorillas were first brought to the park they were in need of constant care. This care was no issue to the dedicated park rangers that helped revive them. 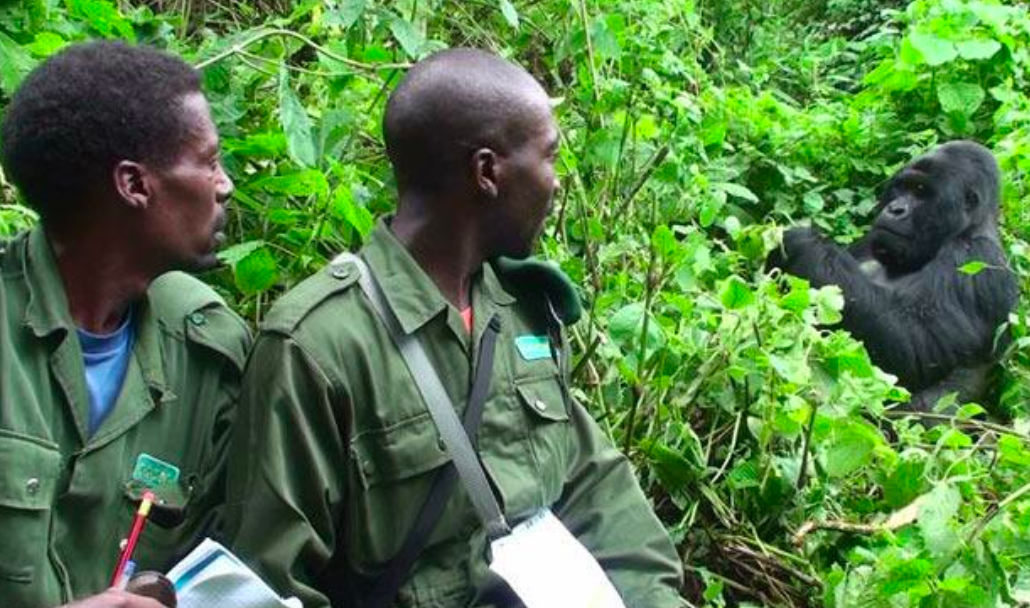 Thanks to the deforestation of the gorilla’s homelands, poachers have been able to make their way through the rainforest with ease. Logging companies have created infrastructures for shipping goods back and forth and poachers have made good use of them as well. 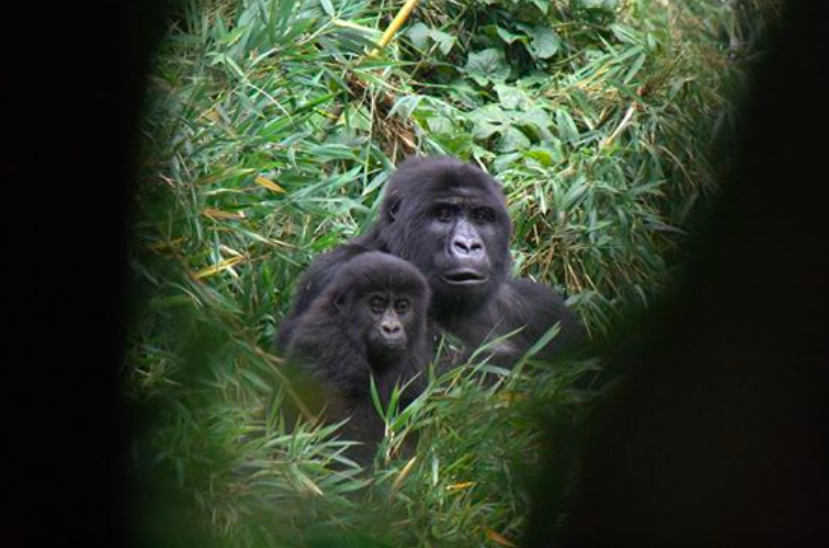 Mountain gorillas are now hunted along these paths and transported for their meat. Poachers gain easy access to their habitats and find ways to trap the gorillas. This leaves them with no chance to defend themselves. The population is continuing to decrease more and more with the poachers gaining such easy access. 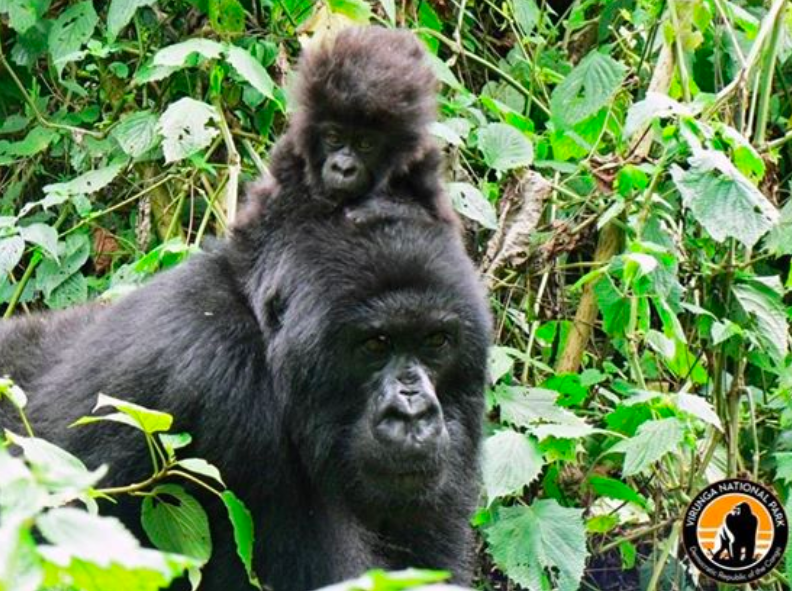 Various conservations, such as the park, are continuing to work hard to keep the gorillas alive. There is a lot more work that needs to be done and the efforts are often quite grueling on everyone involved. 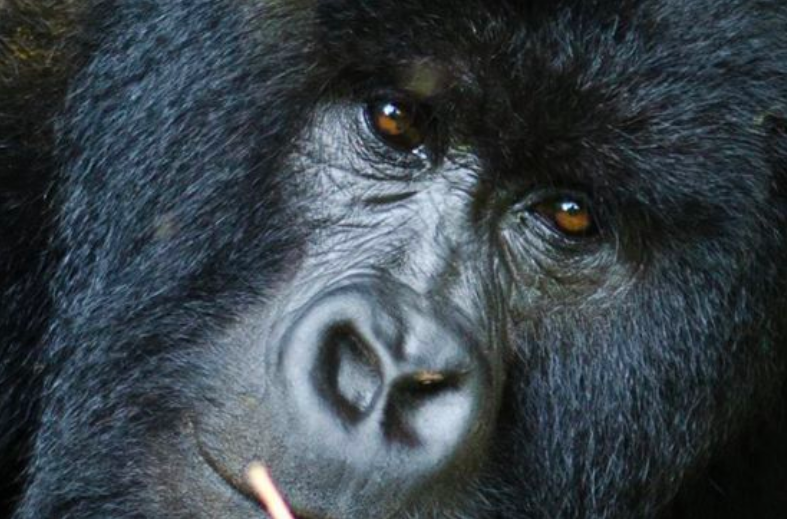 Thanks to the emotional nature of the photo, many people can begin to see just how much gorillas can feel a spectrum of emotions. No matter if it is happiness, sadness, or grief, gorillas are highly intelligent and deserve to be protected from harm’s way. 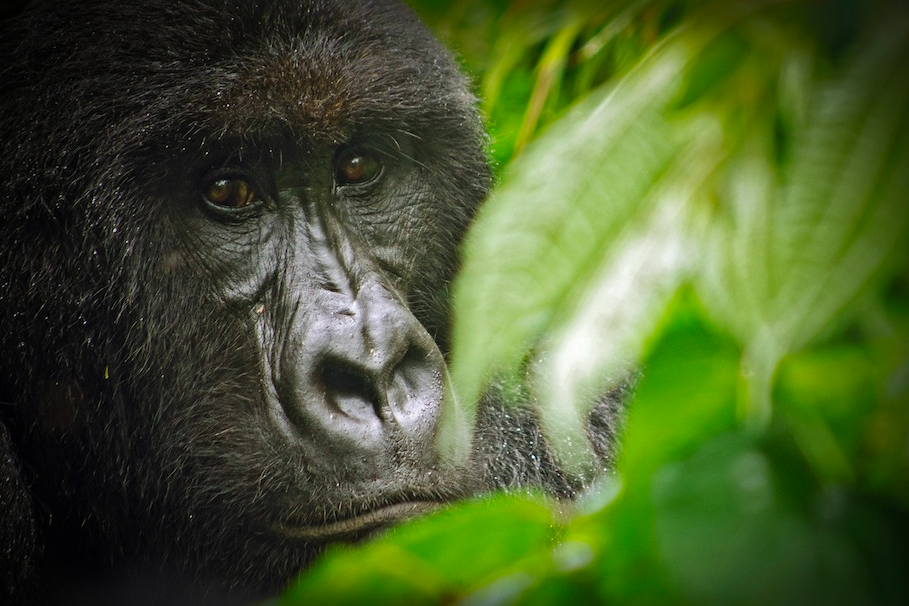 The continued work of the conservations and parks are one of the best chances that the gorilla population has against poachers and deforestation. Gorillas are a highly respectable species and deserve a chance at life just like everyone else.