One man is showing the rest of us what it truly means to open up your heart and home to those in need. After the death of a pet, Steve Greig was pretty brokenhearted. He had so much love to give and nowhere to give it. That was when he decided to adopt some of the most ‘unadoptable’ pets. You’ll fall in love with the kindness and generosity that one man has displayed to so many animals. 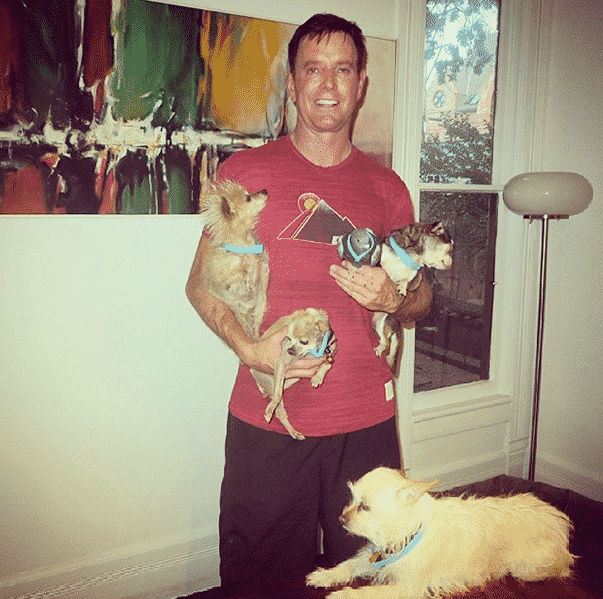 Steve Greig is an accountant and pet owner that lives in Colorado. However, unlike many other pet owners, Steve happens to have an entire entourage of pets. So how many animals does he currently have?! 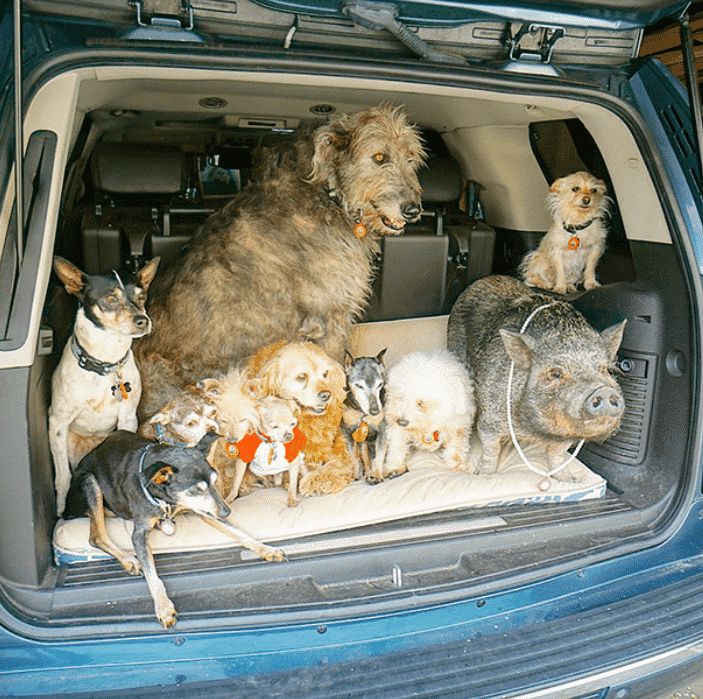 Steve is currently a father to 10 senior dogs, a pig named Bikini, two chickens, two ducks, two pigeons, a few cats, a rabbit, and a pond filled with Koi fish. So how did one man become a father to so many animals? Well, his story is an interesting one. 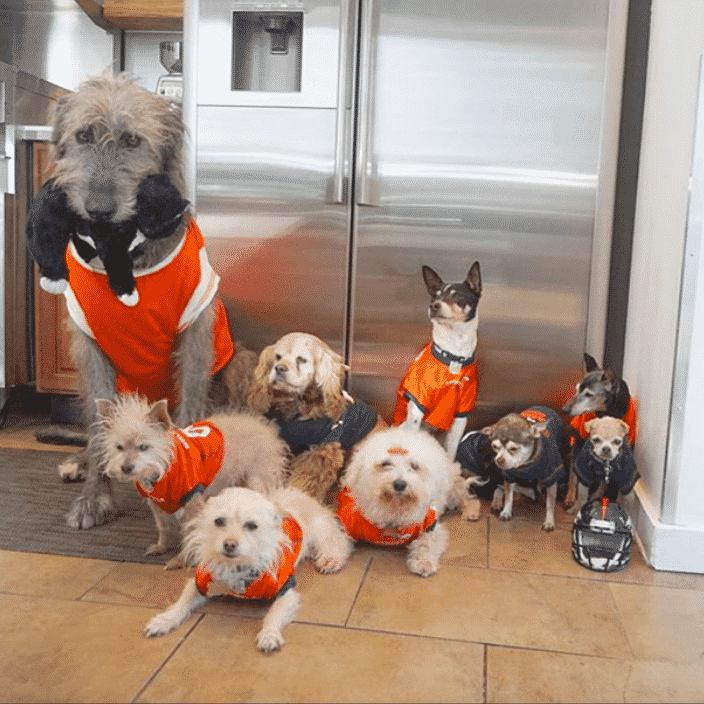 Steve happens to have a lot of love to give and he especially loves giving it to dogs that are having trouble finding forever homes. All of his dogs are seniors and they are often overlooked at shelter’s because of their age and health problems. However, Steve has no qualms about adopting these dogs! 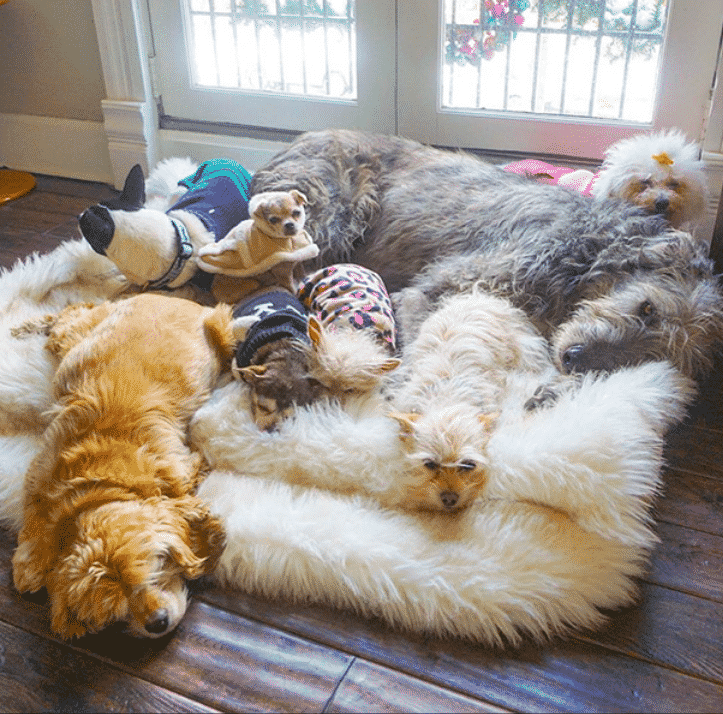 “I grew up with a lot of pets,” Steve Greig told The Dodo. “Both my parents were animal lovers and they pretty much always let me have whatever I wanted as long as I could take care of it.” This love for animals stayed with Greg into adulthood. 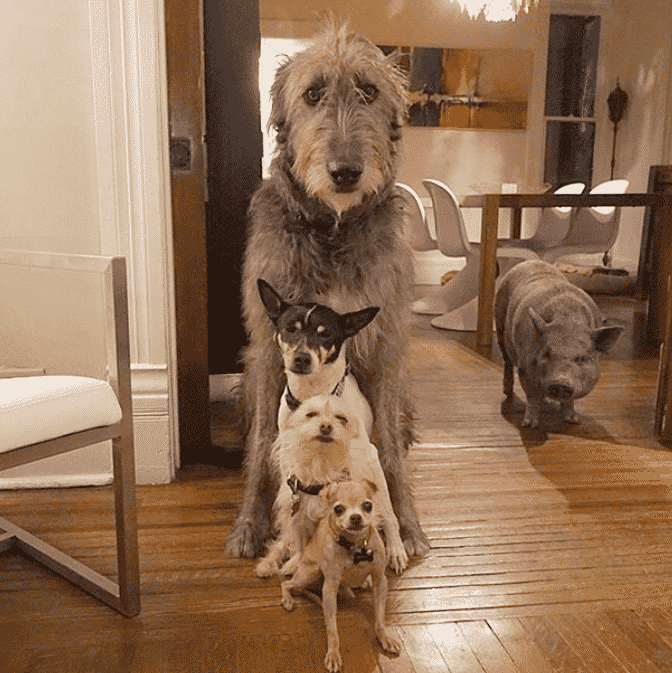 Once he got his own place as an adult, Steve adopted a few dogs. However, the death of one dog in particular really broke his heart. It was a very tough time for him and adjusting to the change wasn’t easy. 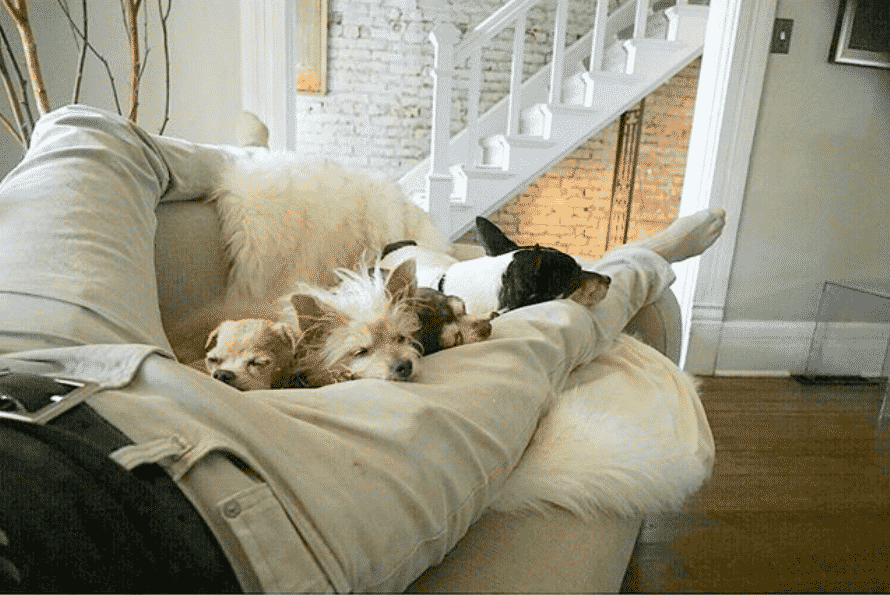 “I was just so distraught about [that death],” Greig said. “A month or two went by and I still felt so horrible about it. I decided that the only way I would feel better was if something something good happened that probably wouldn’t have happened if he had not died.” 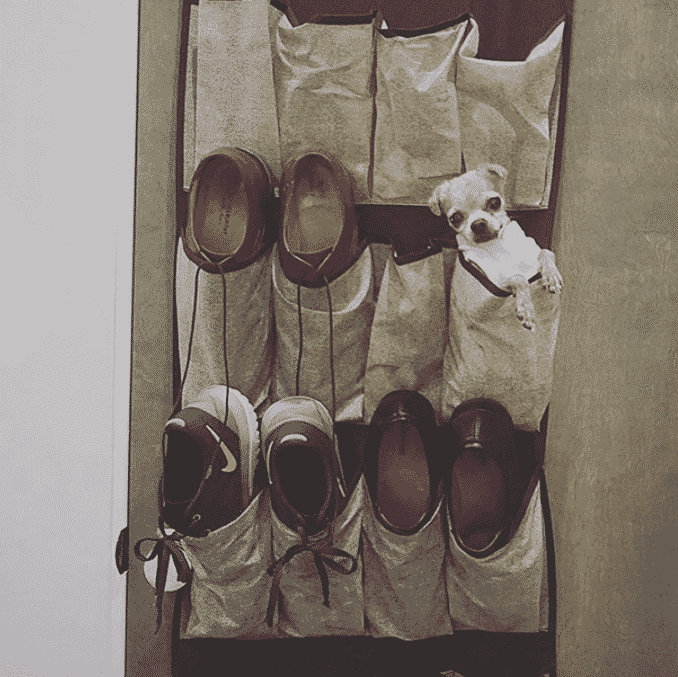 It was after this heartbreaking ordeal that Steve decided to do something bold. He marched over to the local animal shelter and asked for the “least adoptable” dog. That was when Steve was introduced to a 12-year-old Chihuahua with a heart murmur and four bad knees. 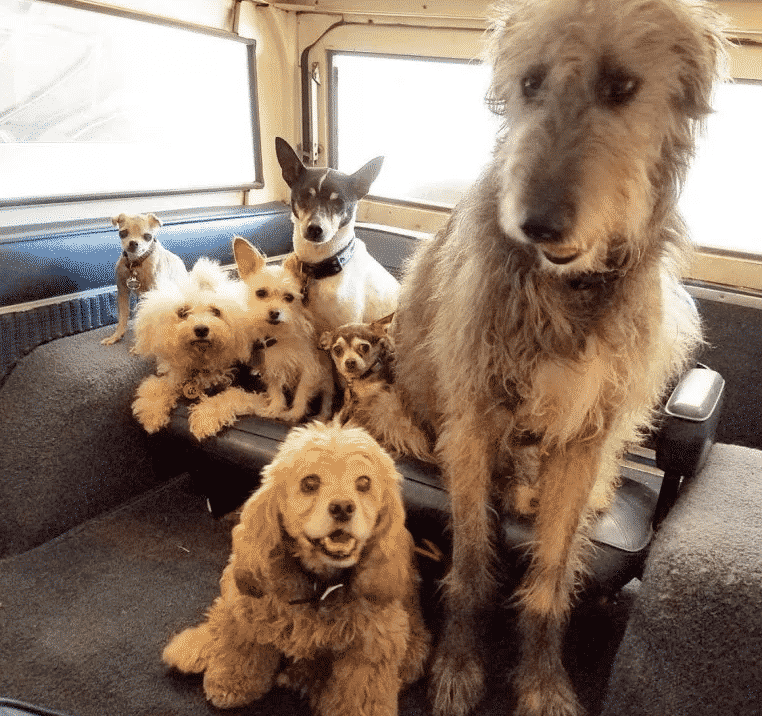 “So [I adopted] a 12-year-old Chihuahua [named Eeyore] with a heart murmur and four bad knees and I brought him home and that was just the beginning of all the animals,” Greig said. This was the starting point of Greg’s big animal filled home. 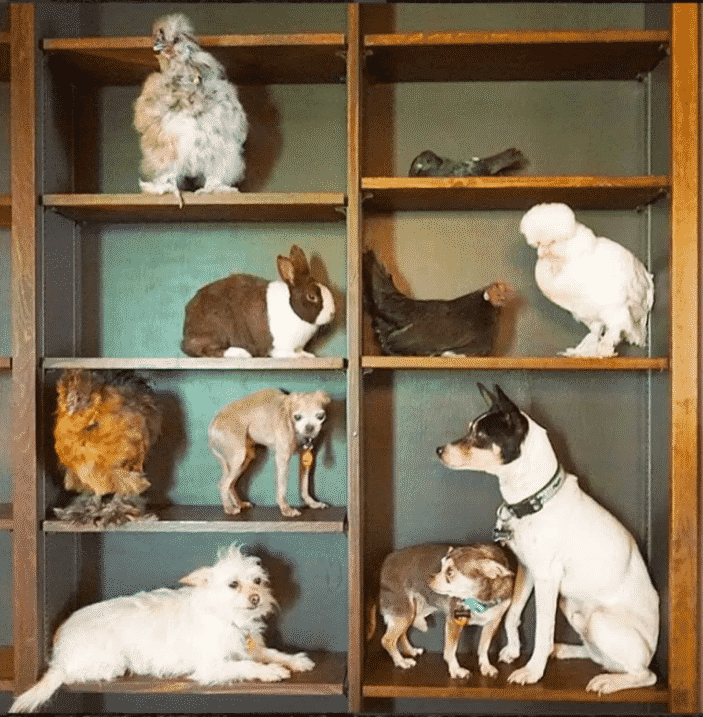 Steve now currently has ten dogs living with him and only two of them aren’t his. One of the dog’s is his roommates and the other dog is his sister’s. All the others however are his and he has turned them all into social media stars! 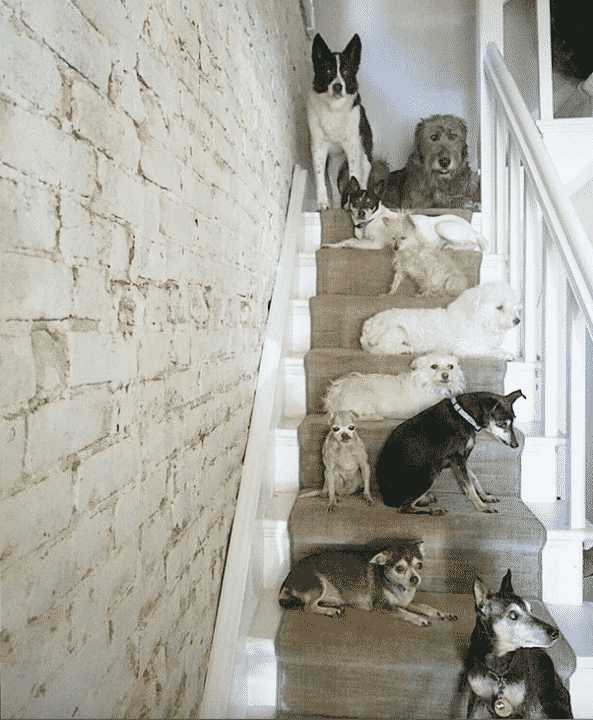 Steve has an Instagram account called @wolfgang2242. On the account, Steve shares tons of adorable and amazing images of all of his pets. The account went viral and now currently has 765k followers who stick around for a new update each day. 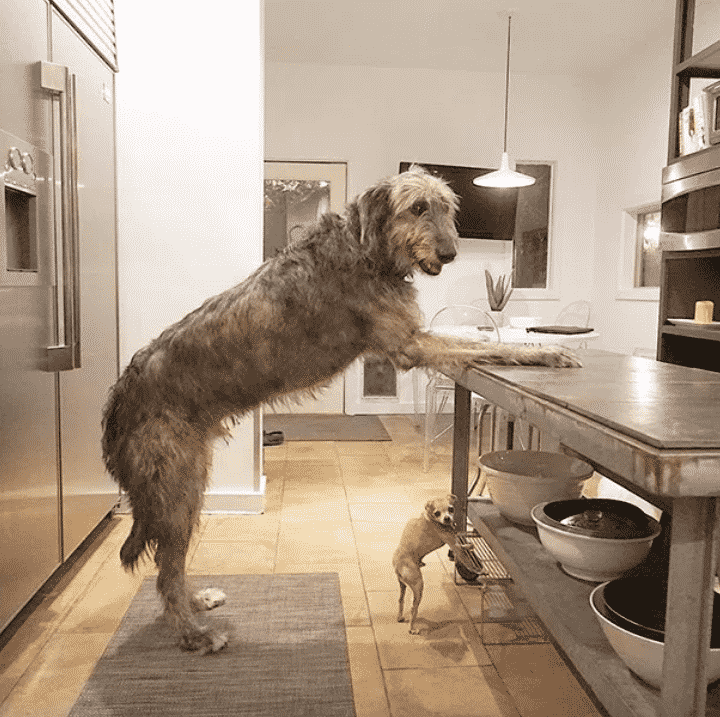 So what’s a day like in the life of Steve and his many pets? “A normal day for me is getting up at 5 a.m. in the morning and making breakfast for all of them, which, you know, there’s 10 [dogs] and most of of them have different diets,” he said. 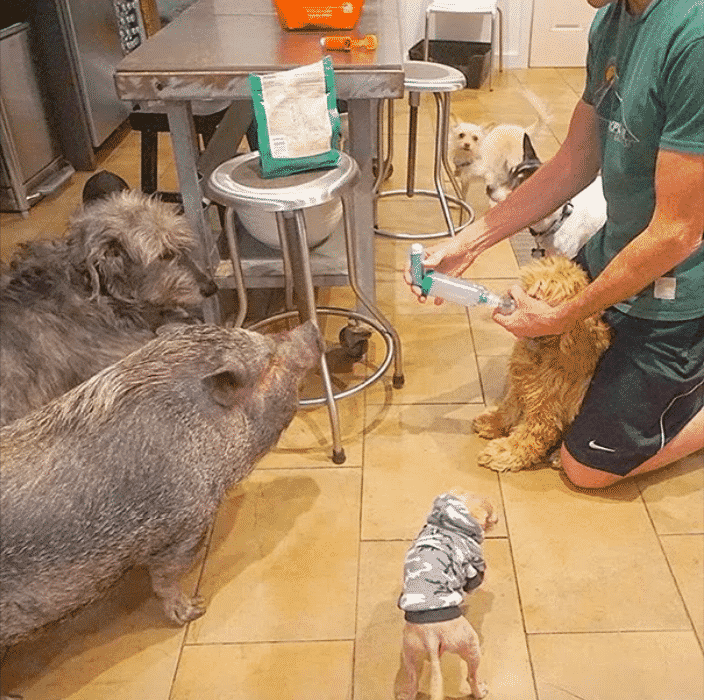 Each morning, Steve wakes up and makes 10+ breakfast meals for all of his pets. Then he makes sure to give all of his senior dogs their necessary medications. Once he’s done all of this Steve heads off to work, but his care doesn’t end there. 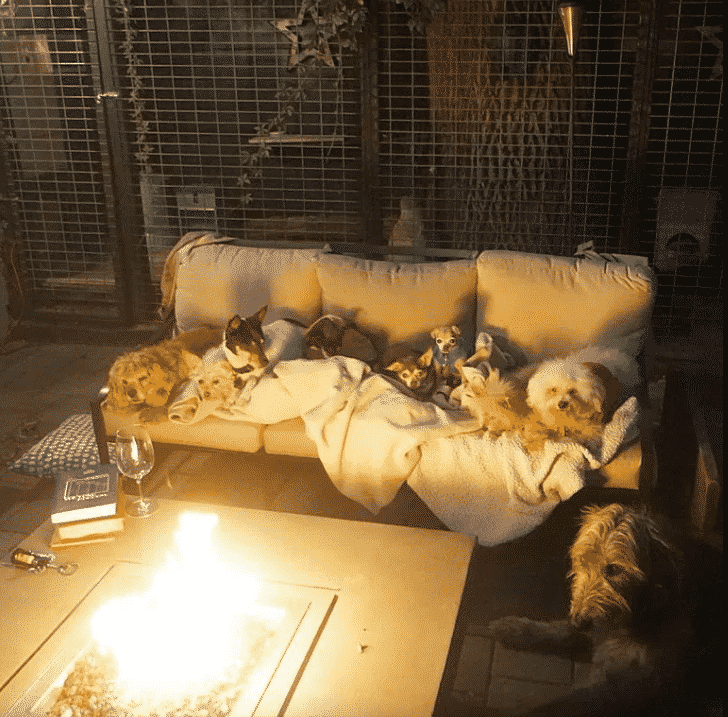 Every day, during his lunch break, Steve heads back over to the house. During this time, he lets the dogs out so that they can get some proper exercise. Then he gives them a tasty treat! 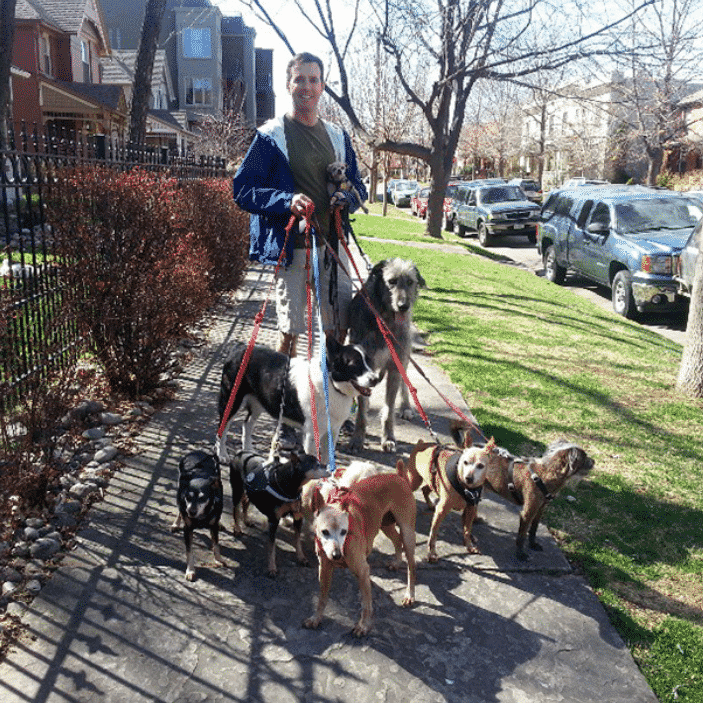 Weekends are an entirely different story with Steve constantly booked up with vet trips, grooming appointments, and fun filled walks. Taking the dogs out on a walk is always an adventure, especially with so many. However, it is always Bikini the pig who happens to steal the show! 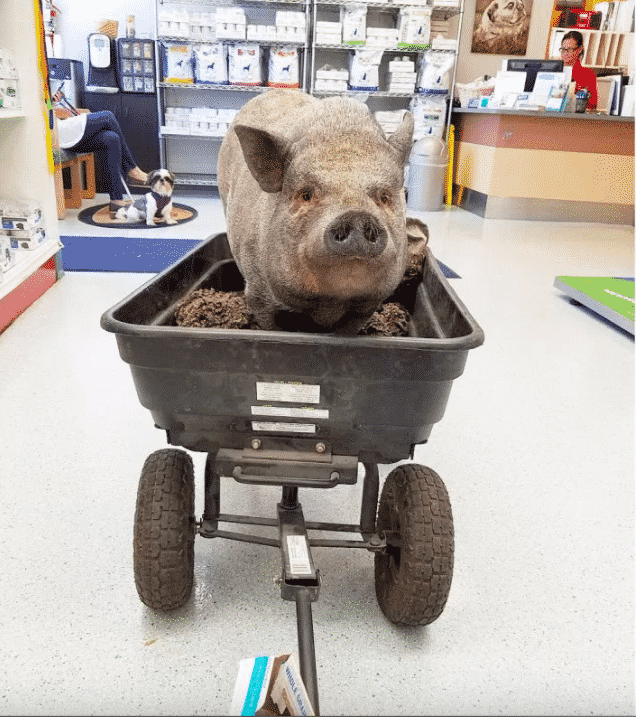 Bikini the pig loves going out during walks as well, however, she prefers riding along in her wagon. Steve took on Bikini and his chicken Oprah from a farm that he had visited. He was told that Bikini was already house-trained and his thought process was, “I’m not going to have much of a better chance getting a pet pig.” 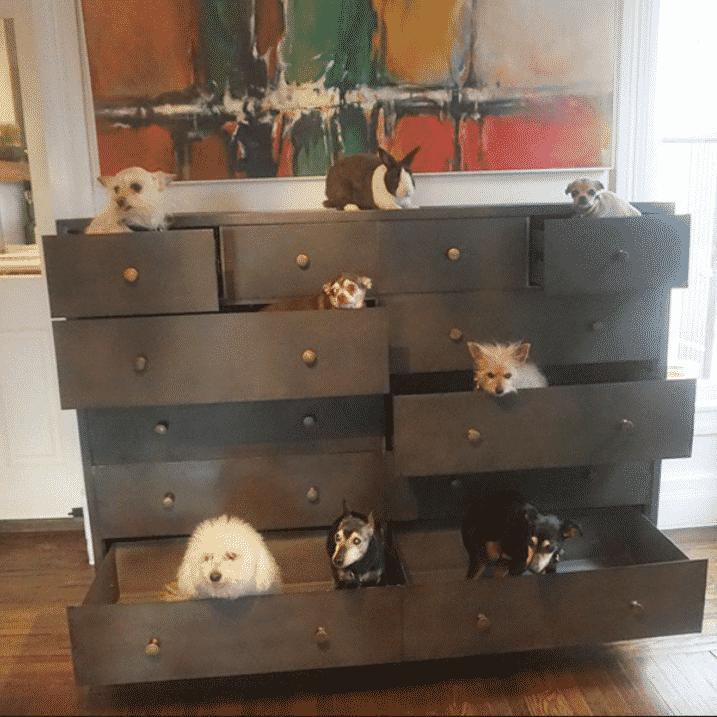 Steve also has a pet rabbit that someone had just abandoned on his front porch! “That rabbit, someone just left him in my front yard is how I came to get him,” Greig said. “I assume someone knew I had lots of animals and thought ‘Yeah, he’ll give him a good home.’ So, I found him in my front yard one morning and I put him in the chicken coop because I wasn’t sure what to do with him.” 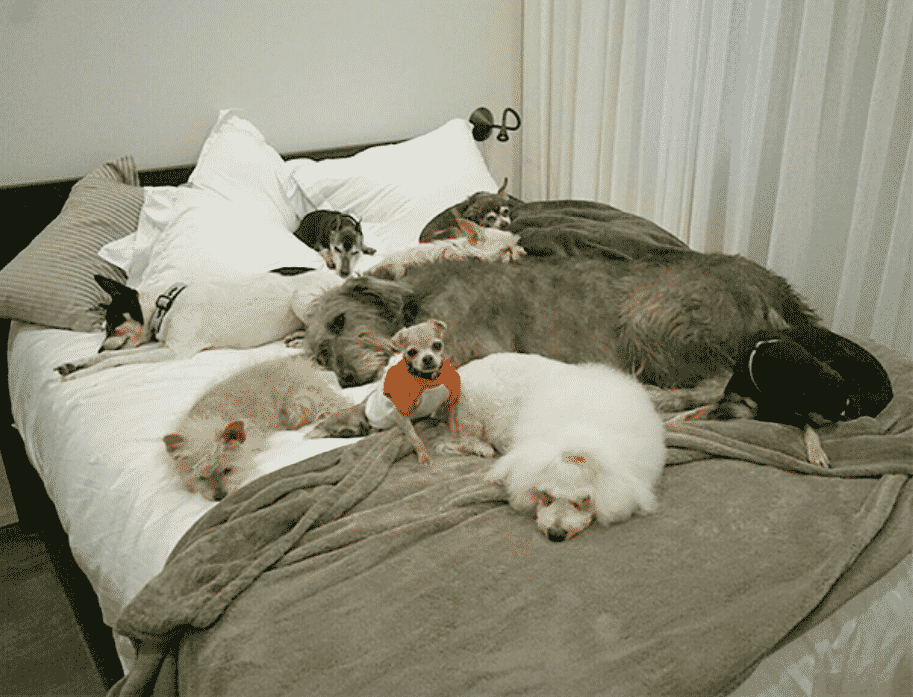 Steve says that all of his animals get along great. Everyone is happy to be around each other and they all also love to nap a whole bunch! When asked how he feels about adopting senior dogs, Steve had a lot to say… 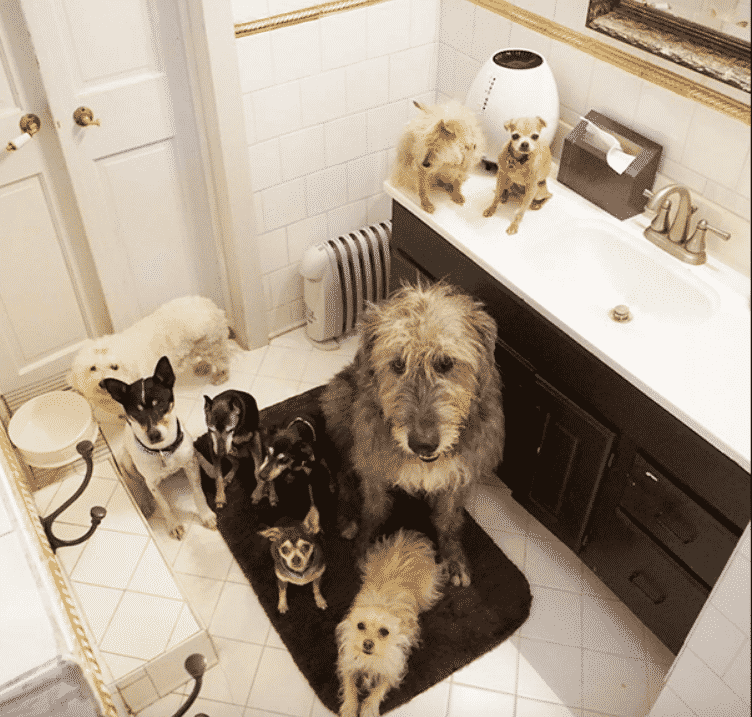 “They’re just wiser animals,” he said. “You kind of know what you want out of life once you become a certain age. These dogs know who they are and it’s easy to develop a relationship with a person or pet who knows who they are.” 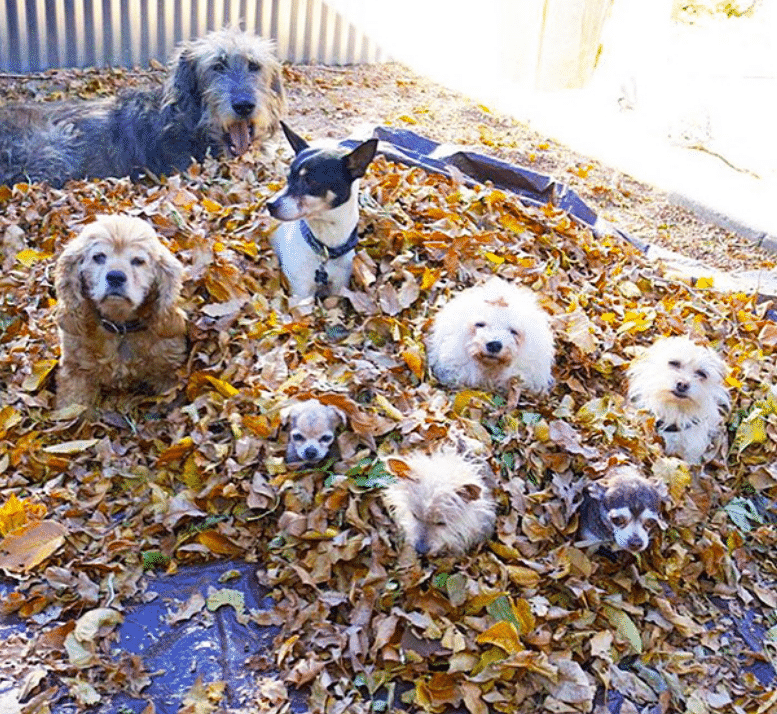 “It’s just fulfilling knowing that these guys are happy and loved and well-taken care of. It makes my days worthwhile,” Steve shared. Since most of the dogs are seniors, he has stated that they aren’t too hyperactive and most of the time he doesn’t notice that he has so many dogs. 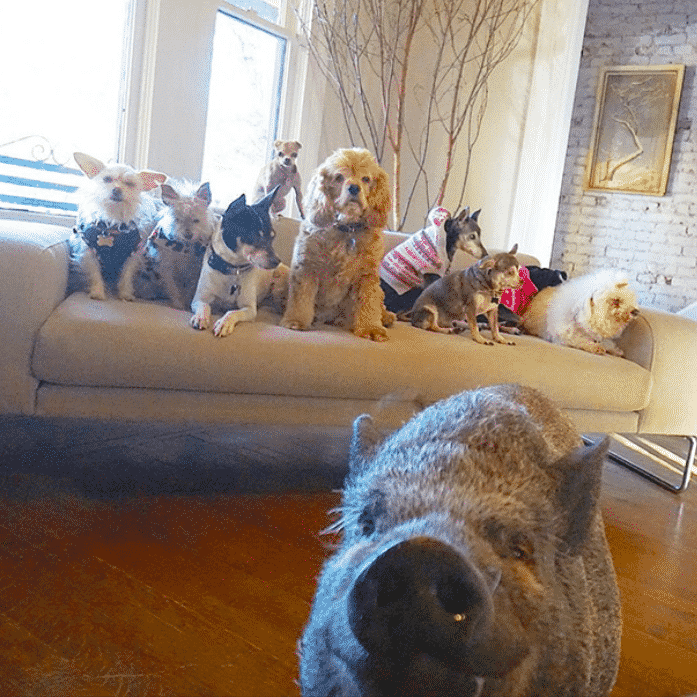 Steve has stated that having so many animals in the house is a truly loving and rewarding experience. “Like right now, I’m outside on my patio and it’s a beautiful day,” Steve told The Dodo. “Bikini’s laying in the yard and the dogs are all laying around the yard. They just makes it feel like home.”