When a dog is abandoned at a shelter, that is a great sense of loss that the pup feels. It isn’t easy to adjust to living in a new environment and that task is made even more difficult if the dog is old and has health problems. So when this 18-year-old dog finally made a human connection at the shelter, she just knew she couldn’t let it go. 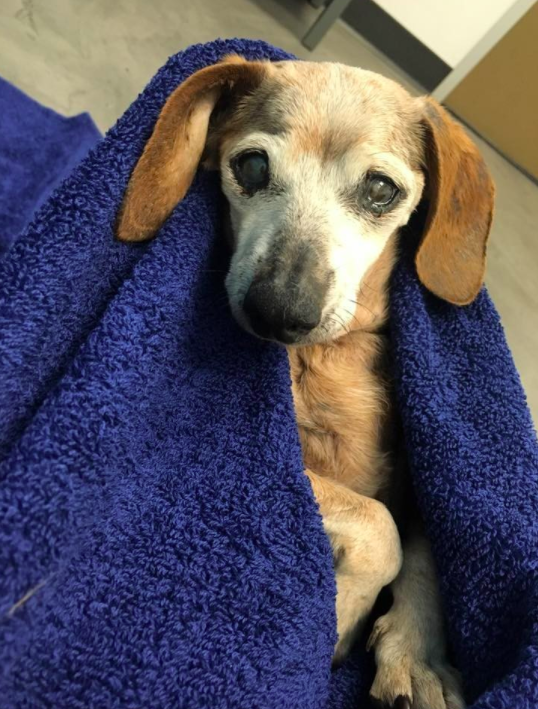 Shelter life is rough for a dog, especially an older one. It’s a huge adjustment, especially if they had owners before. That was the case with this adorable Dachshund that was simply looking for love. 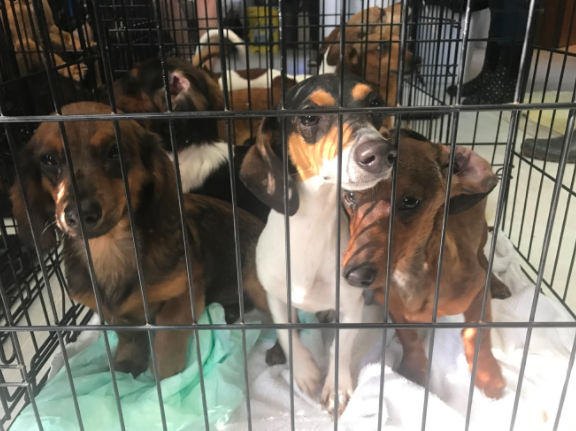 18-year-old Muneca was abandoned at a shelter. The poor dog had lost her family, her home and even her vision. She was lost in the world and very upset about it. She was looking for a connection and there was no telling if she’d find it. 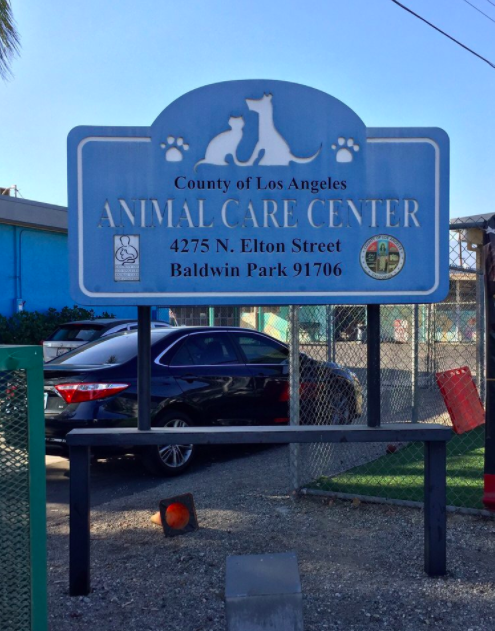 Muneca found herself at the Baldwin Park Animal Care Center in Los Angeles. It was obvious that the situation was draining on her. She was looking for a long-term companion but wasn’t about to just leap into anyone’s arms. When longtime volunteer Elaine Seamans first approached Muneca, she never expected to receive such a warm reaction. The dog immediately fell in love with her and leaped right into her arms. Elaine was blown away… 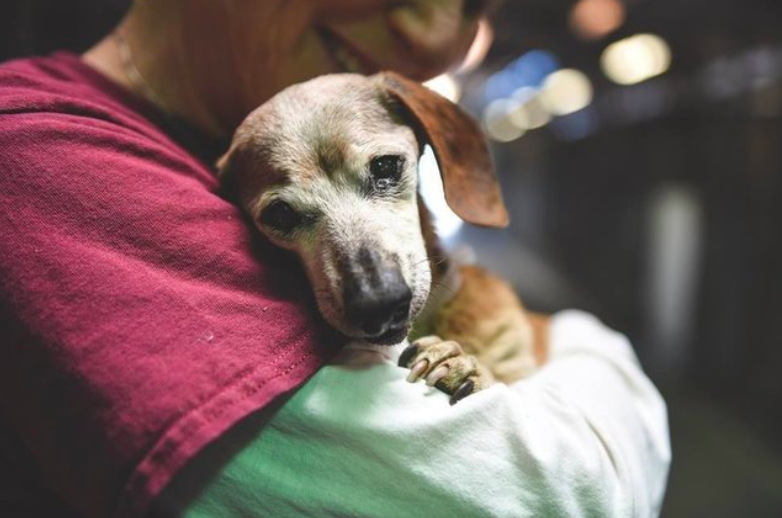 Seamans immediately noticed that Muneca was different from the other pups at the shelter. Muneca clung to her like a baby would and refused to be let go. No one could believe what was happening. 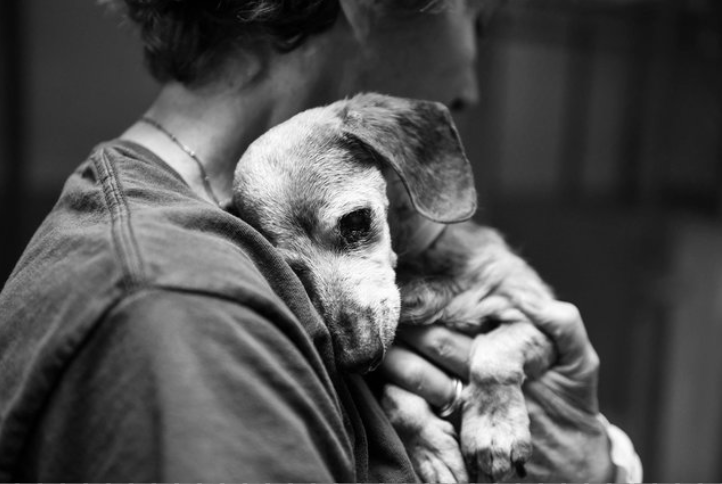 The moment was incredibly precious and Seamans held the dog in her arms for quite a while. It just so happened that a professional photographer was at the shelter that day and was able to capture the moment. 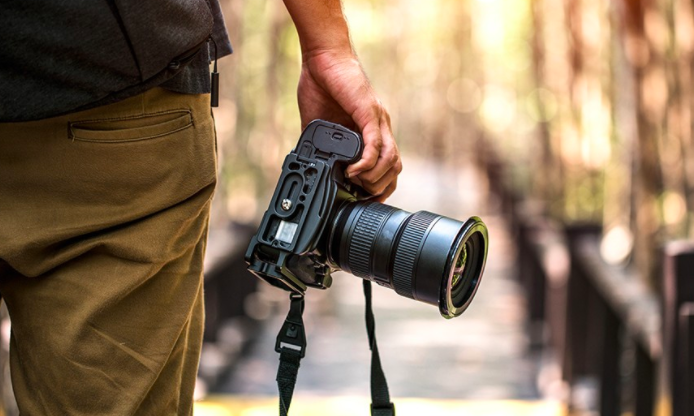 John Hwang had stopped by the shelter and had his camera handy. Hwang was heading out to LA’s Skid Row to take photos and was quickly drawn to the moment that was occurring right before his eyes. He knew he had to snap a photo. 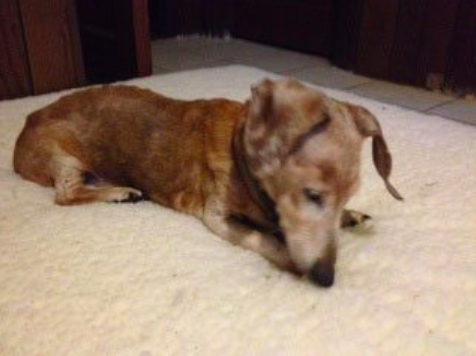 Before taking the photo, Elaine had approached him and asked if he would be interested in capturing the moment. Hwang knew that he couldn’t pass up on the opportunity. Hwang took the photo and uploaded it to Facebook. 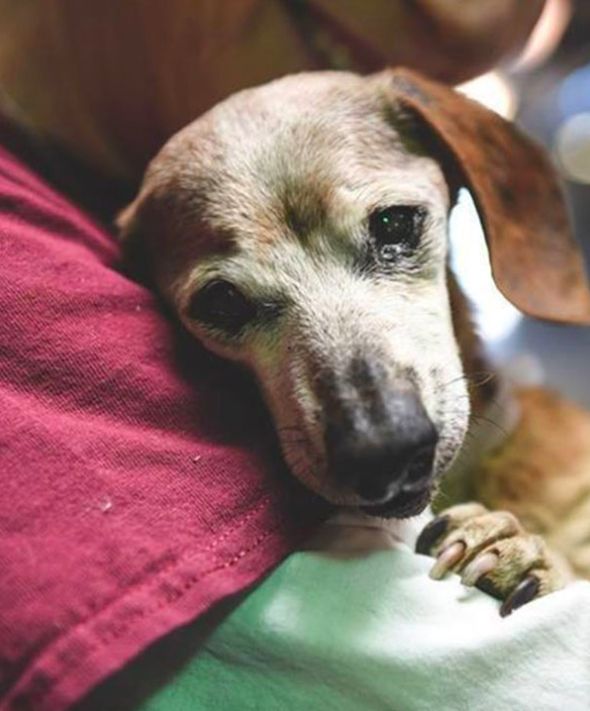 Image: All Cute All the Time

“When I got to the shelter, Elaine was already holding the dog,” Hwang tells The Dodo. “The dog was clinging on to her.” He took a photo of that exact moment and it quickly generated attention when the photo made its way online. 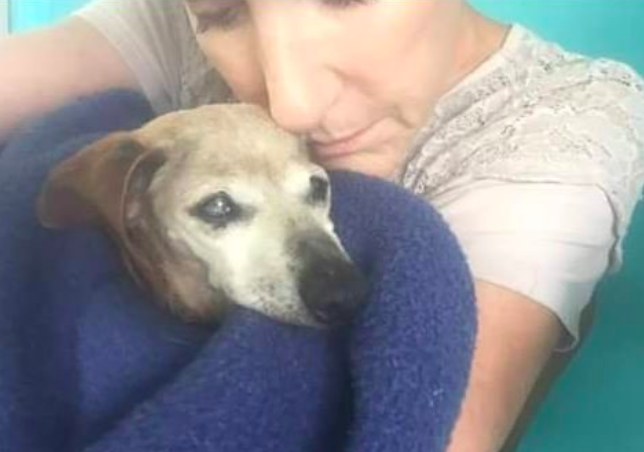 “Elaine is so amazing with the dogs,” Hwang continued saying. “She’ll roll on the ground with the shelter dogs. She’ll kiss them. She really has a special chemistry with them. I love capturing that.” 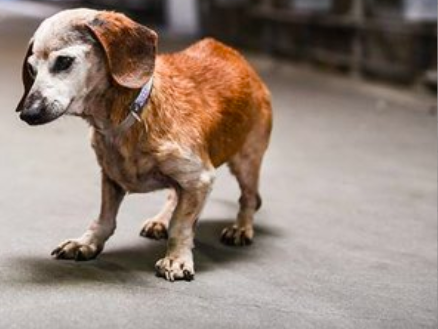 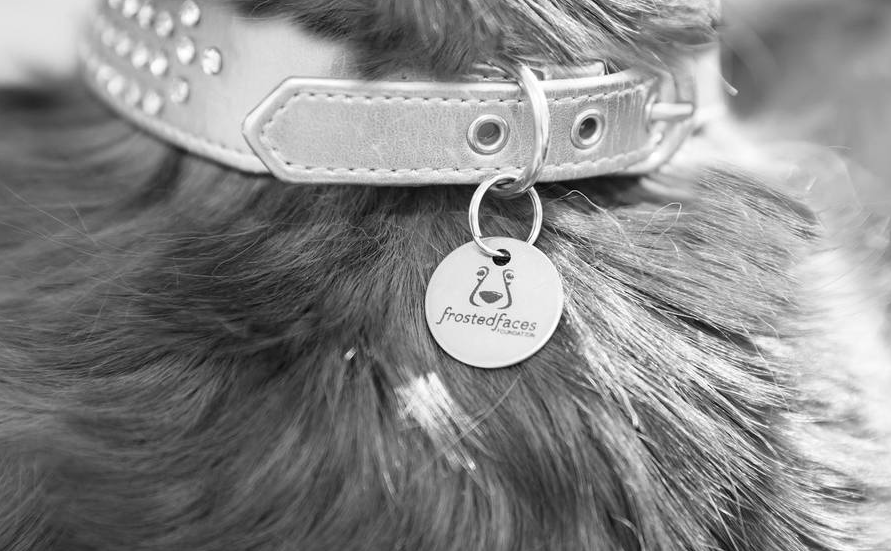 Hwang ended up uploading the photo onto his Facebook page where it generated a bit of buzz. Eventually, a rescue group called Frosted Faces Foundation reached out asking about Muneca and how they could help. 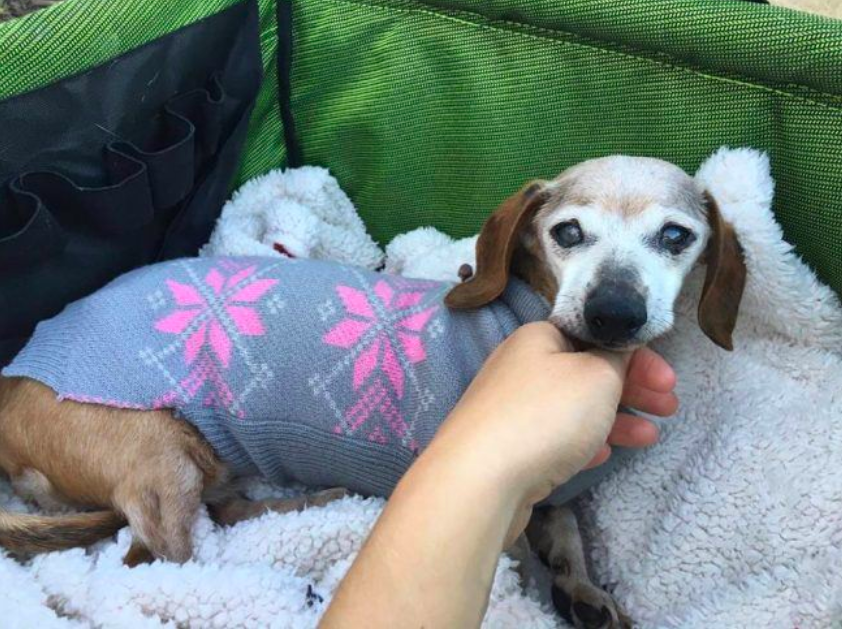 The foundation quickly got in touch with the shelter and worked their magic. They were able to get Muneca into a veterinarian’s office for a regular check-up. From there, the news only gets better. 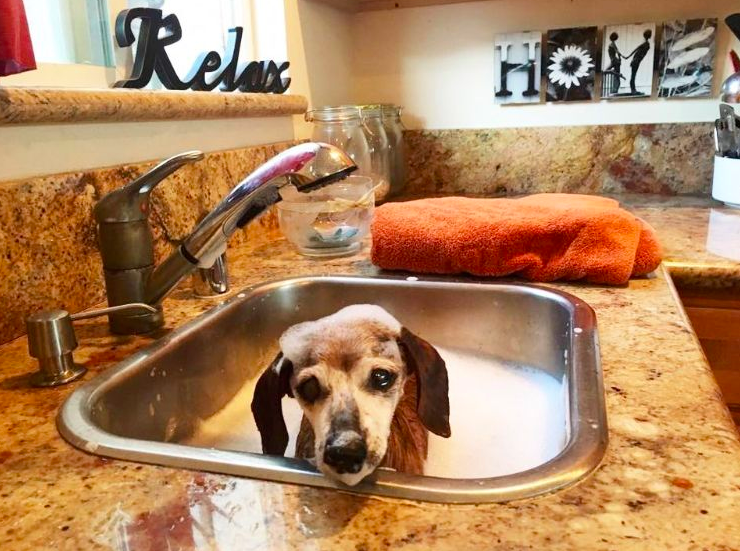 After Muneca was cleared with the veterinarian, the foundation was able to place her in a foster home until someone was ready to take her in forever. Muneca was getting the love she so desperately wanted. Then one day, she got the best news ever. 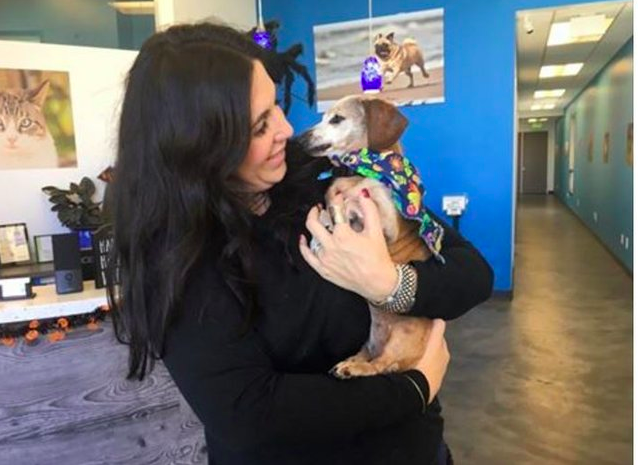 Eventually, Muneca ended up finding a mother in Amy Gann. The organization had screened tons of people before they decided on Amy being the perfect mom for Muneca. It was truly a match made in heaven between the two of them! 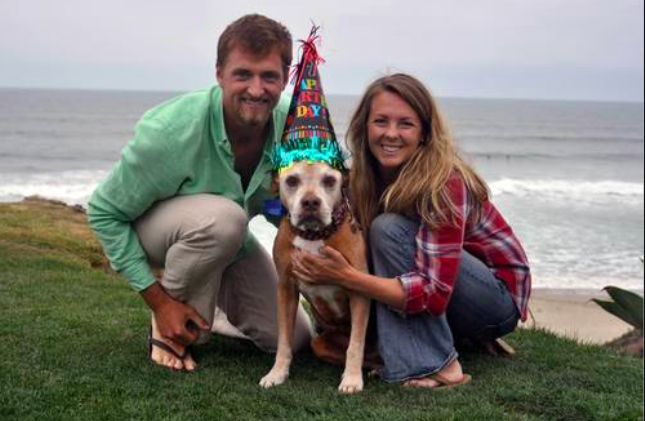 “We screened a lot of people and talked to all their references,” Kelly Smíšek, executive director of Frosted Faces, told The Dodo. “We home-checked a bunch of people.” 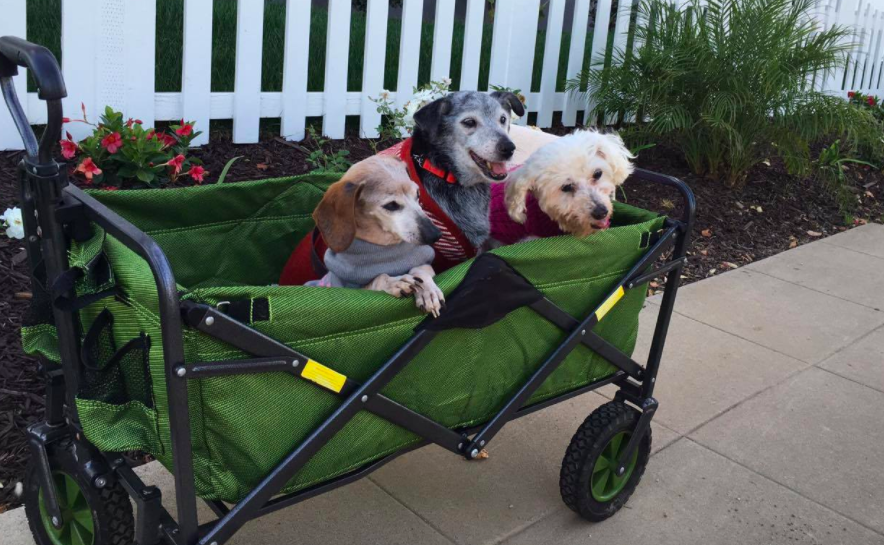 “By the time we approved someone and they drove to San Diego, I met them, I was very nervous. I thought, ‘I hope we picked the right person.’ And immediately, it was, ‘Oh my Gosh. I’m so glad she’s going home with you,” Smíšek revealed. 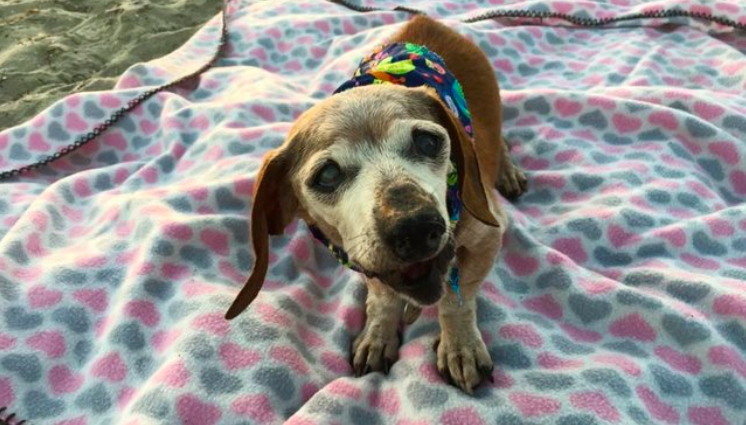 “I can’t put her down,” Gann wrote to Smíšek in a text message. “I have very close family and we pass her along like a new baby in the family.”

Gann and Muneca continue to enjoy each other’s company, no matter what they do together! 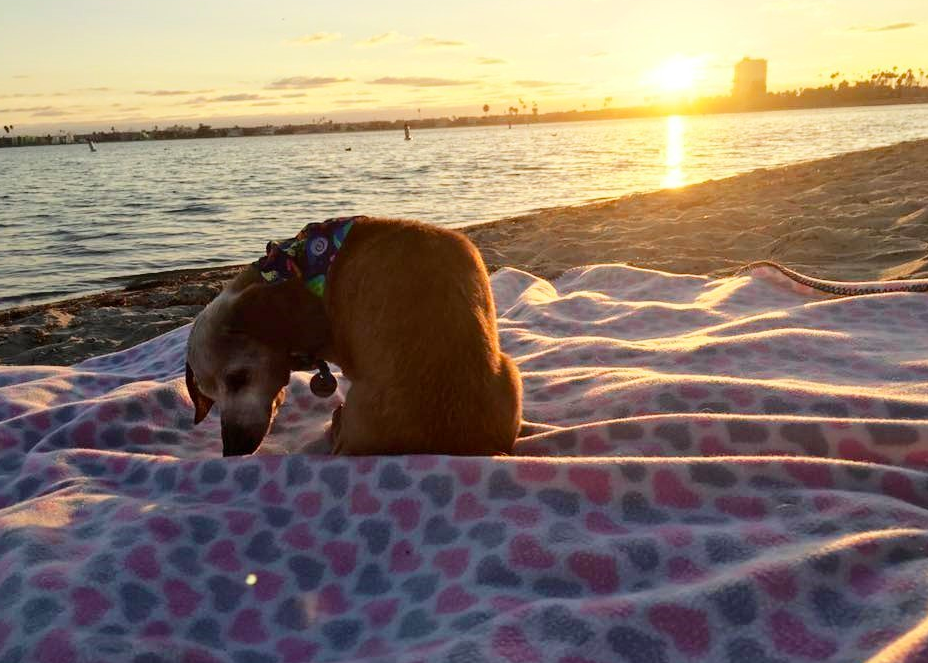 The two go to the beach together and enjoy leisurely activities. Gann is grateful to have been chosen as Muneca’s adoptive mother. Neither one of them takes each other’s company for granted.

It is truly heartwarming to hear stories with a happy ending. Despite her terrible situation, Muneca was able to find a happy home to spend the rest of her life in. Now she and Gann both have the pleasure of each other’s friendship.