Our Dog Was Getting A Human Sister, So I Built Her A Room Under The Stairs – It Turned Out Better Than Expected

A new baby is a serious life-changing situation for all families. While it’s a pretty huge change for the parents-to-be, it can also be a big surprise for a family pet. That’s why this dog dad decided to help his puppy transition to the new family member by building her a room of her very own! You’ll be blown away by just how nice this dog’s new bedroom is. 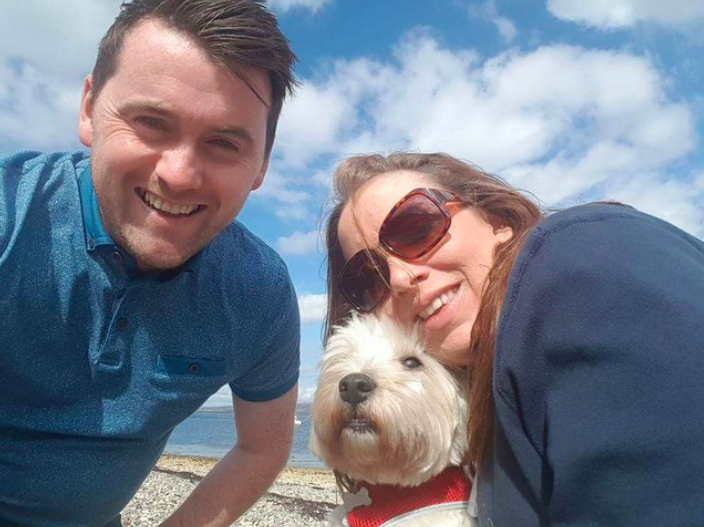 For the longest time, Molly the Westie was the only child in the McGowan household. Her parents, Michael and Emma McGowan gave her all of the attention in the world. However, soon that would all change… 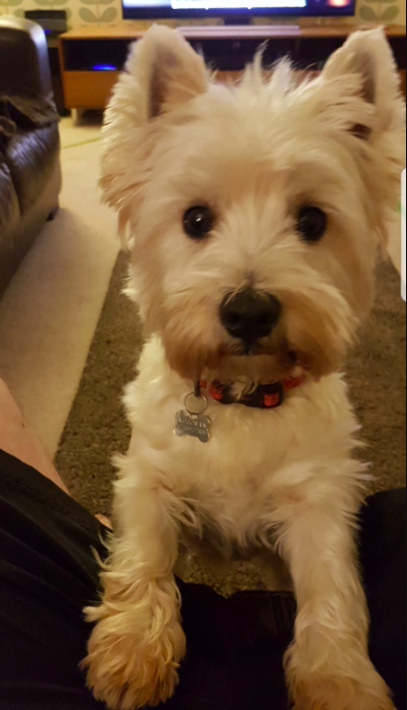 Things were about to change very soon after Emma found out she was pregnant. The couple was incredibly excited for the new addition to their family however, Michael wanted to make sure that Molly didn’t feel left out in the process. 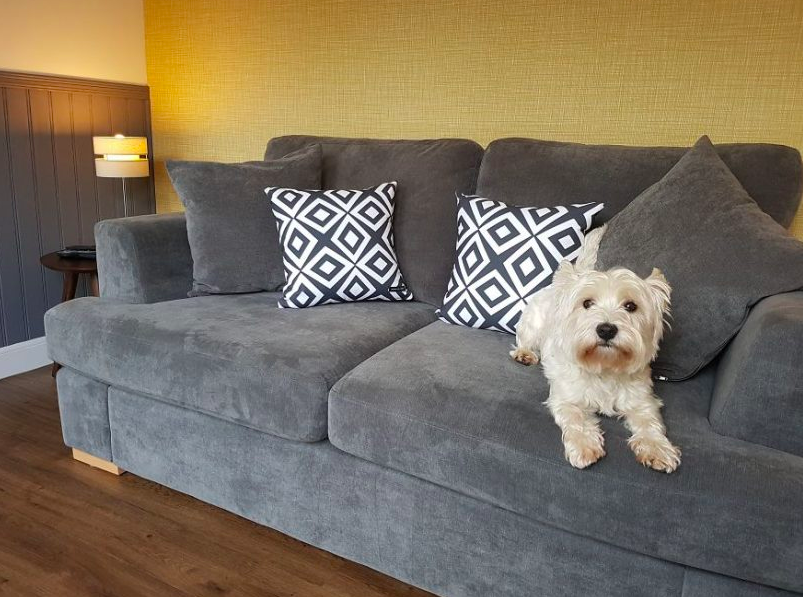 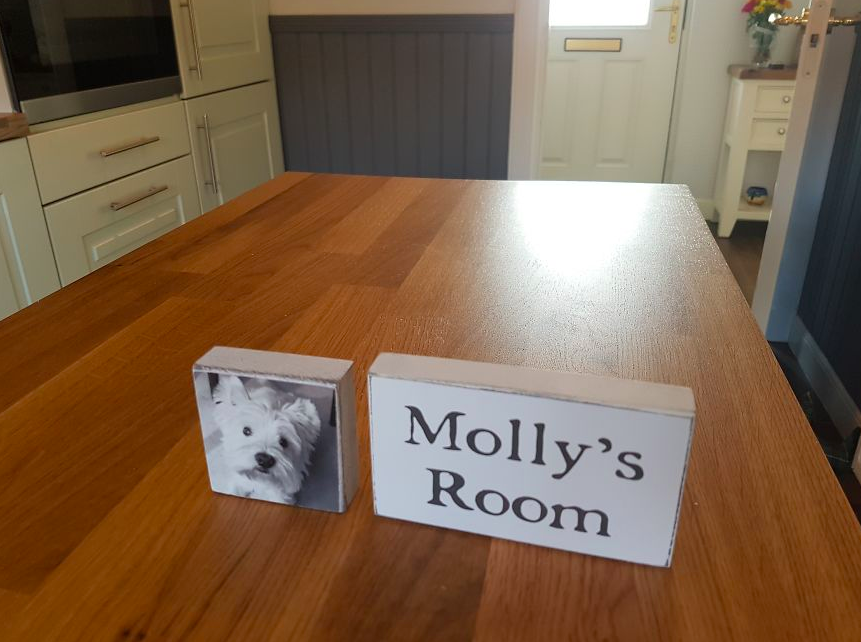 Michael decided that he would build Molly her very own room in the house. It was a project that he thought was worthwhile because of how much he and Emma adore Molly. He set out immediately on figuring out how exactly he would accomplish the task. 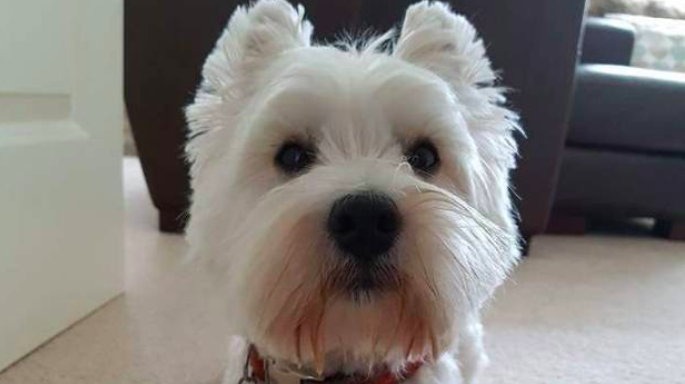 “My wife and I love her to bits, and she’s pretty spoiled,” Michael told The Dodo. “We found out this time last year we were going to have a baby so I thought I would try to give her her own little space to make the transition easier.” 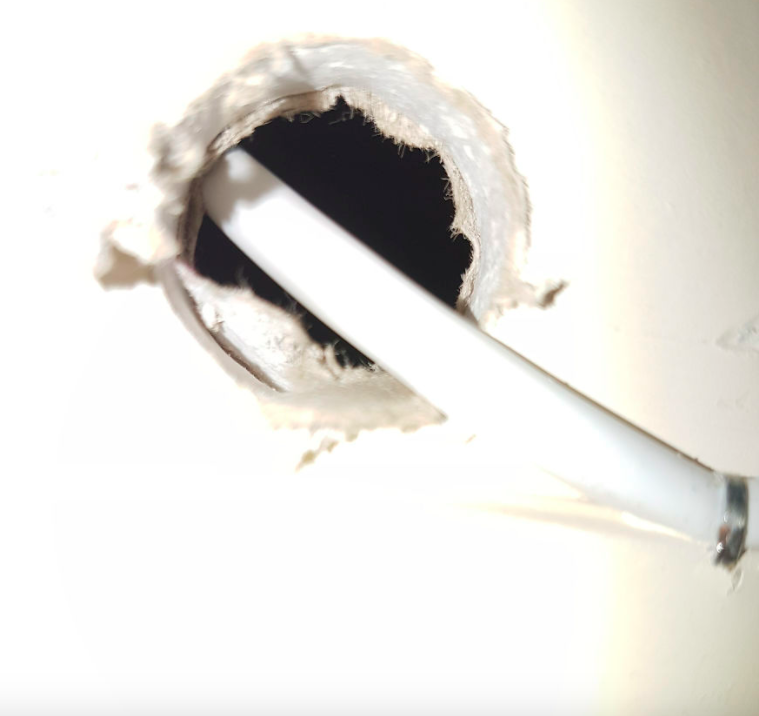 At first, it wasn’t very obvious where Michael would place Molly’s room. Michael thought about it and then finally found the perfect place! He couldn’t believe that he hadn’t realized it from the beginning. 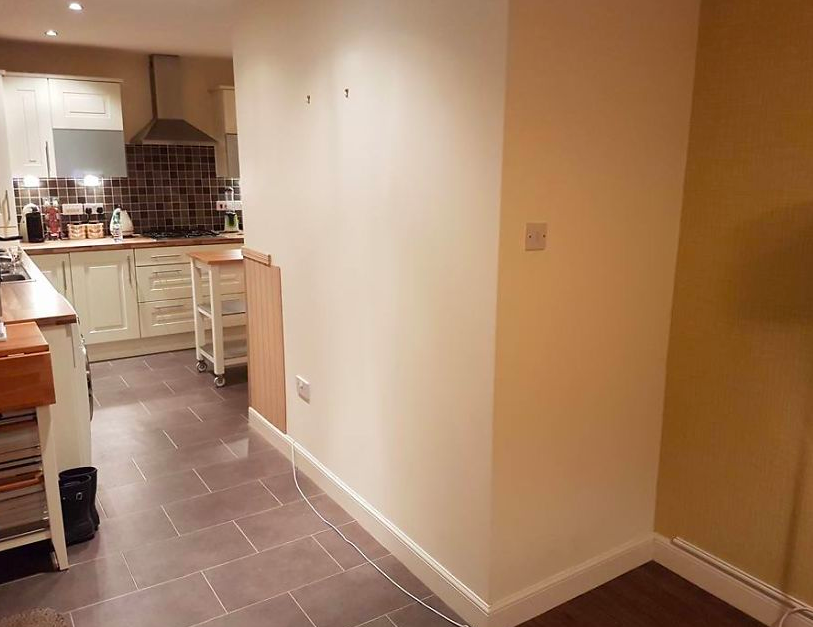 Along a set of stairs behind one of the walls in the kitchen was a lot of extra space that wasn’t being used. Michael decided that this area would be dedicated to Molly’s new room. However, it wasn’t an easy task… 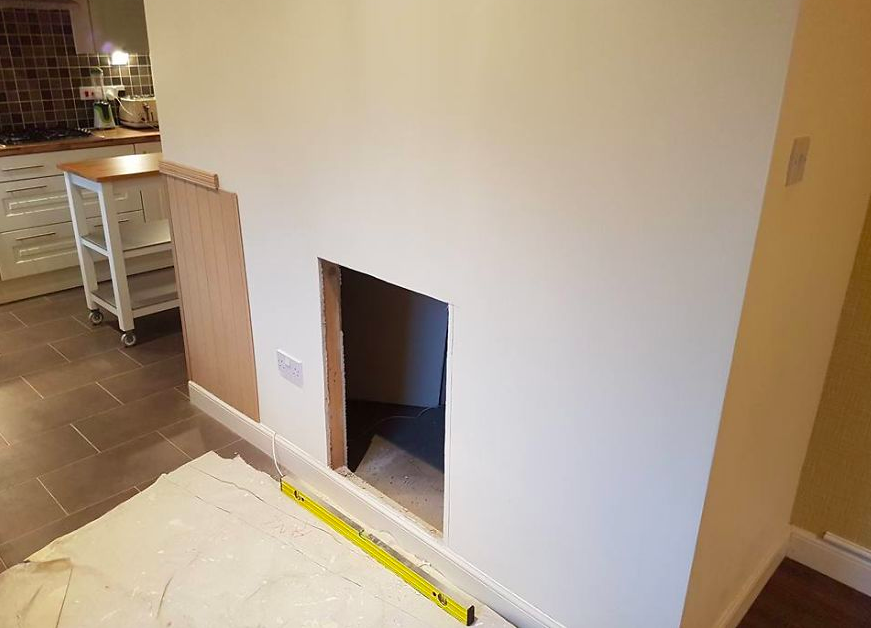 “I hoped there would be some wasted space behind the staircase but wasn’t sure how big,” he said. So Michael began cutting away at the space, trying to figure out just how much space there was to work with. He was surprised by what he found… 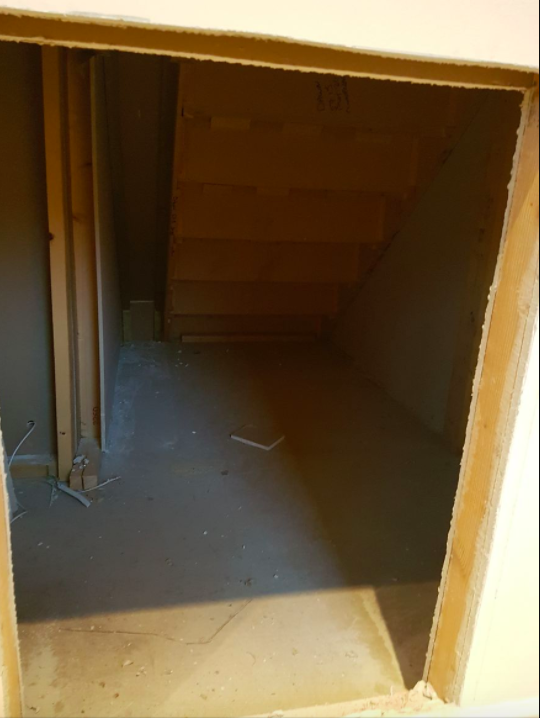 “Turns out it was 4 meters square, so plenty big enough,” Michael said. Now the real daunting task was next: convincing Molly that this would be her new room! Molly wasn’t enthused from the beginning. 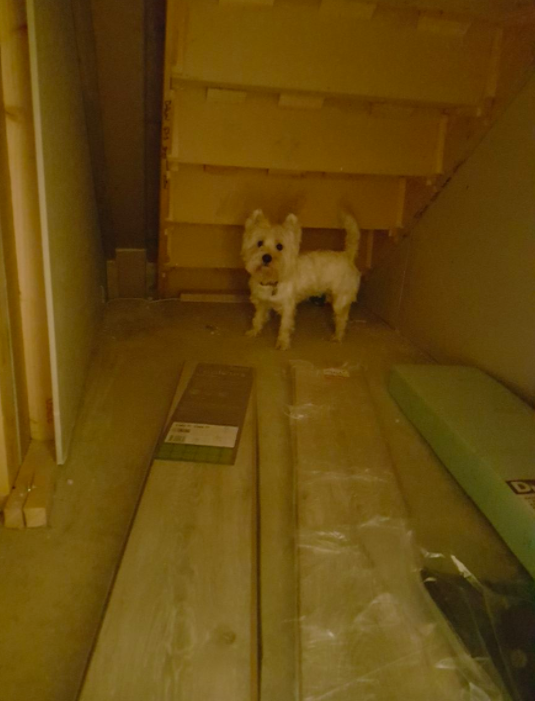 After Michael cut a doorway large enough to fit through, he showed Molly the space. She wasn’t thrilled with the rough beginnings. However, Michael enlisted the help of a tradesman to help him get the job done right. 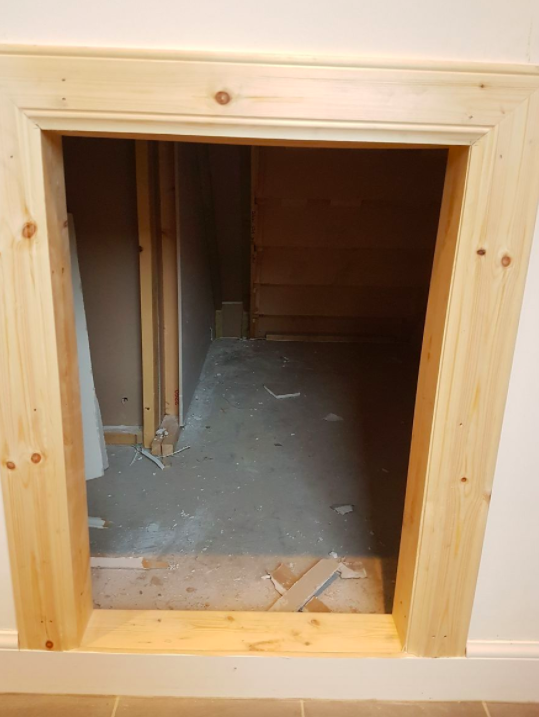 “He helped the early stages in terms of cutting the doorway, fitting the doorframe and putting in the sockets in order for me to fit the lighting,” Michael said about hiring a tradesman. Next came the renovations… 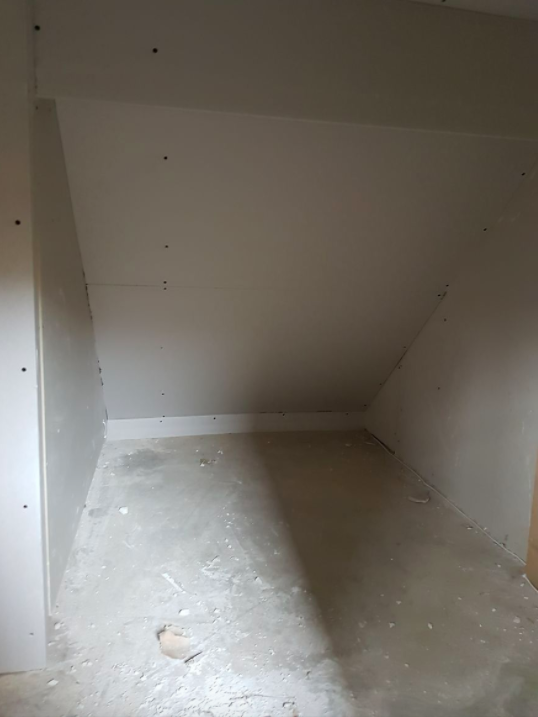 Michael continued on with the rest of the renovations. He plastered flooring and placing some pretty cute dog themed wallpaper. Things were finally starting to come together. 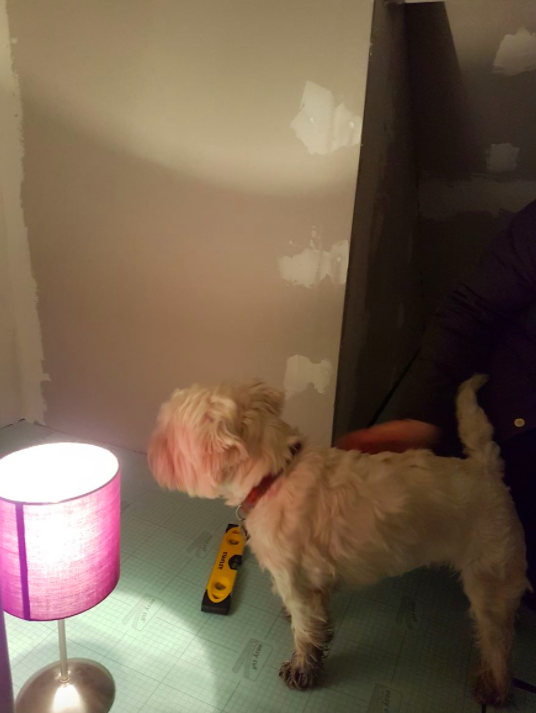 Molly stayed around to inspect her father’s work. After all, it was her stamp of approval that he was looking for. After all of the hard labor was completed, Michael decided to add a cozy touch to the room. 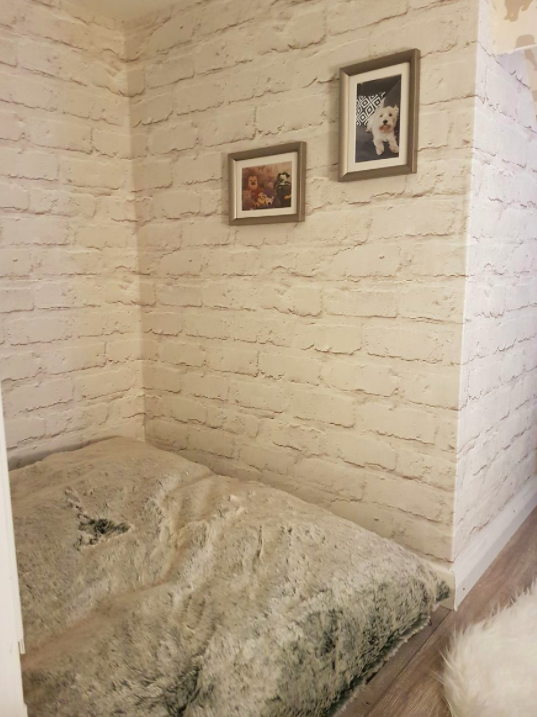 Michael went on to add a few finishing touches. He added a small lamp, some adorable photos of Molly with her buddies, and even the comfiest looking pillow where she could easily fall asleep during nap time. However, that wasn’t the end of the decorating! 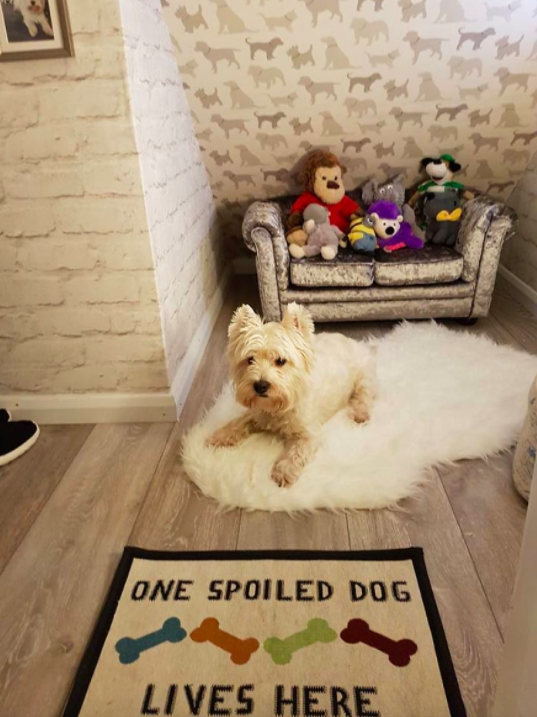 How could any room be complete without a couch? You see, Michael thought the exact same thing so he added a tiny sofa to the room. The entire project was completed in only two weeks and Molly’s reaction was totally unexpected… 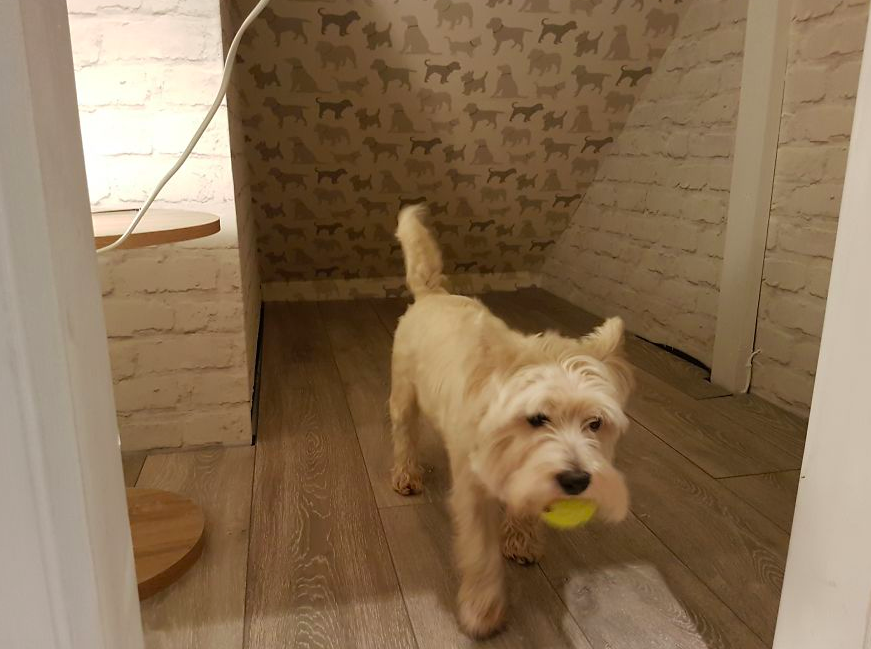 “Luckily after all the effort she loves sleeping here, and always runs in to choose from her collection of toys when visitors arrive,” Michael shared. Thanks to her new room, Molly was super excited when a new baby joined the family. 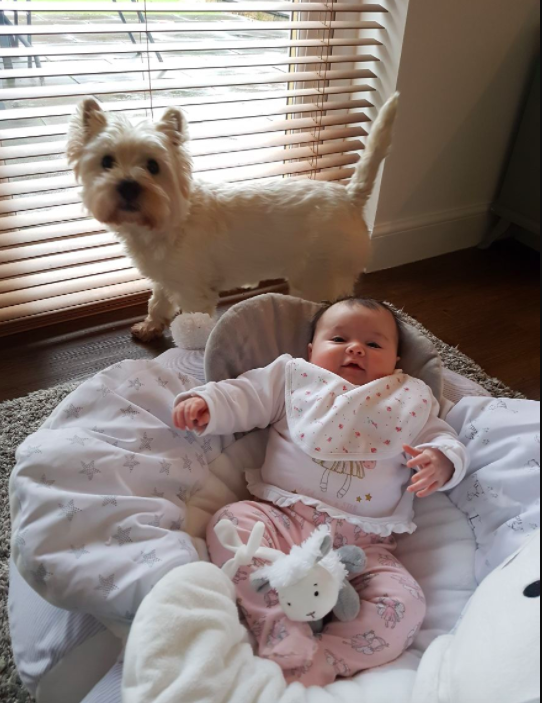 The new baby and Molly get along great and Michael thinks a lot of it has to do with Molly having her own space to escape to when she needs it. “Her own space definitely helps; she often goes away for some peace and quiet when we have lots of visitors,” Michael said. 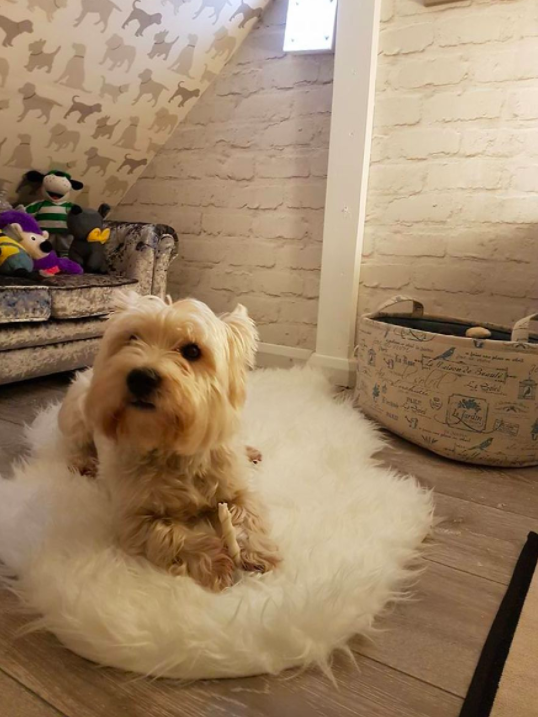 Although it took a lot of work to complete the bedroom project, Michael wouldn’t have had it any other way. “She is most definitely a member of the family,” Michael said. “We know how important it is for her to be comfortable and have her own space.” 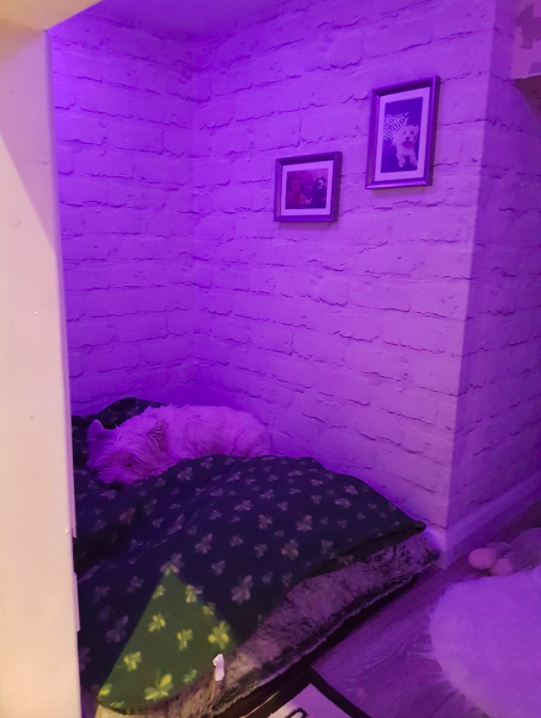 Now Molly can be found in her room nonstop. She’ll either cozy up on her bed with some romantic lighting or play around with her favorite toys. Molly is incredibly happy to have such caring parents that went out of their way for her. 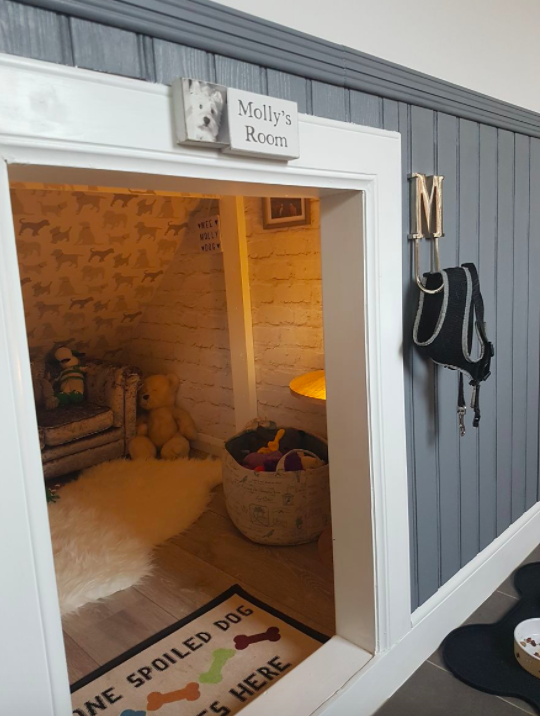 Thanks to all of the hard work Michael put in, Molly’s room renovation has been nominated for the “Job of the Year” competition. The room has been nearing the top of the competition with everybody admiring how much dedication was put into a room for a family pet!