The animal kingdom has never been short of surprising us. We view ‘getting a meal’ as the primary objective of these creatures, but sometimes the unbelievable emotions that they express catch us off guard. Such a similar display of maternal instincts for something that is considered as prey was thankfully captured on camera by some farm owners, or else it would have been tough to believe. 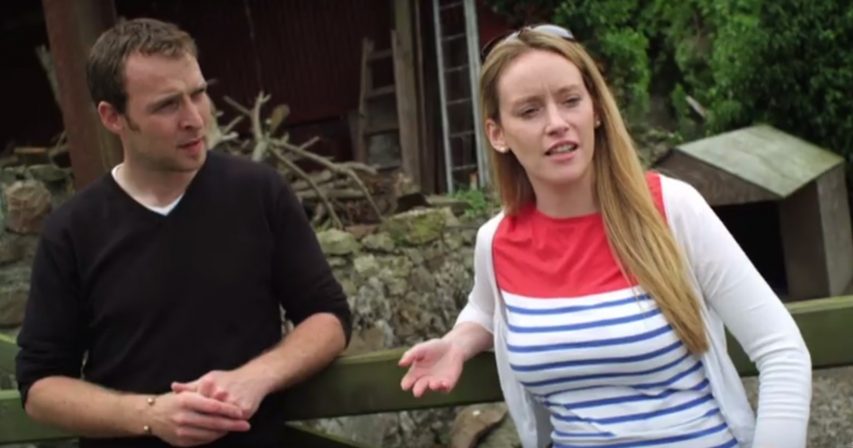 Ronan and Emma Lally own a lively farm in Clara, County Offaly, Ireland. Recently, they just bought a few fertilized duck eggs. Being experienced farm owners, they tried their best to keep them away from hungry predators.

But we all know how difficult it is to protect such vulnerable preys. What happened next will change many perspectives

19. Orphaned eggs brought to the farm 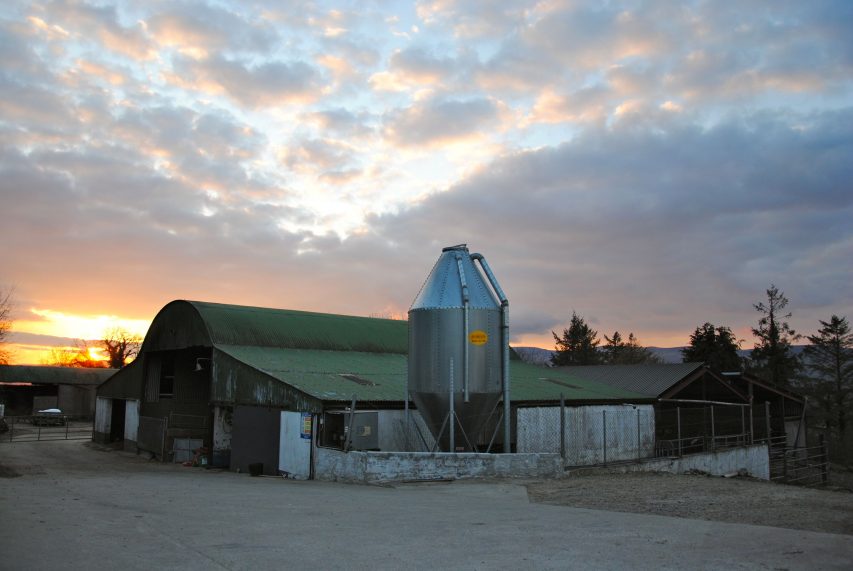 Ronan and Emma were being worried about how these fertilized eggs would survive the hatching process without a mother duck. Was it a dumb move that will put the eggs into more trouble? Find on next slide… 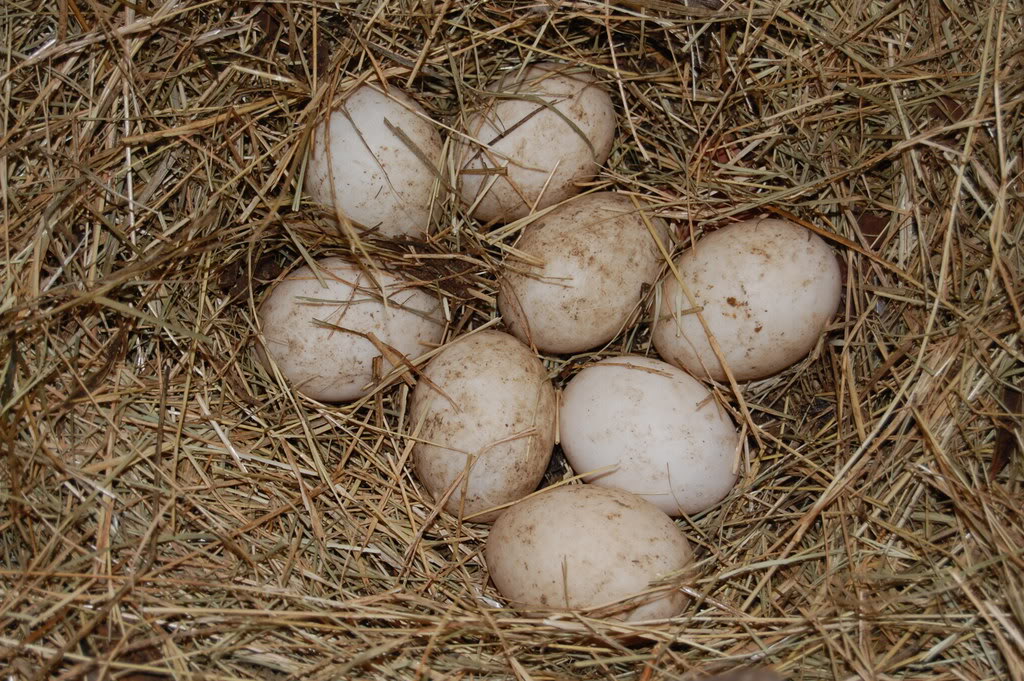 Ronan and Emma made a nice setup for the eggs in their farm.

But one day when both Ronan and Emma were walking across their farm for a morning check, they saw that the eggs had been already hatched.

But the bigger surprise was there were only empty shells in the nest!

They had no idea about what happened to their precious ducklings! 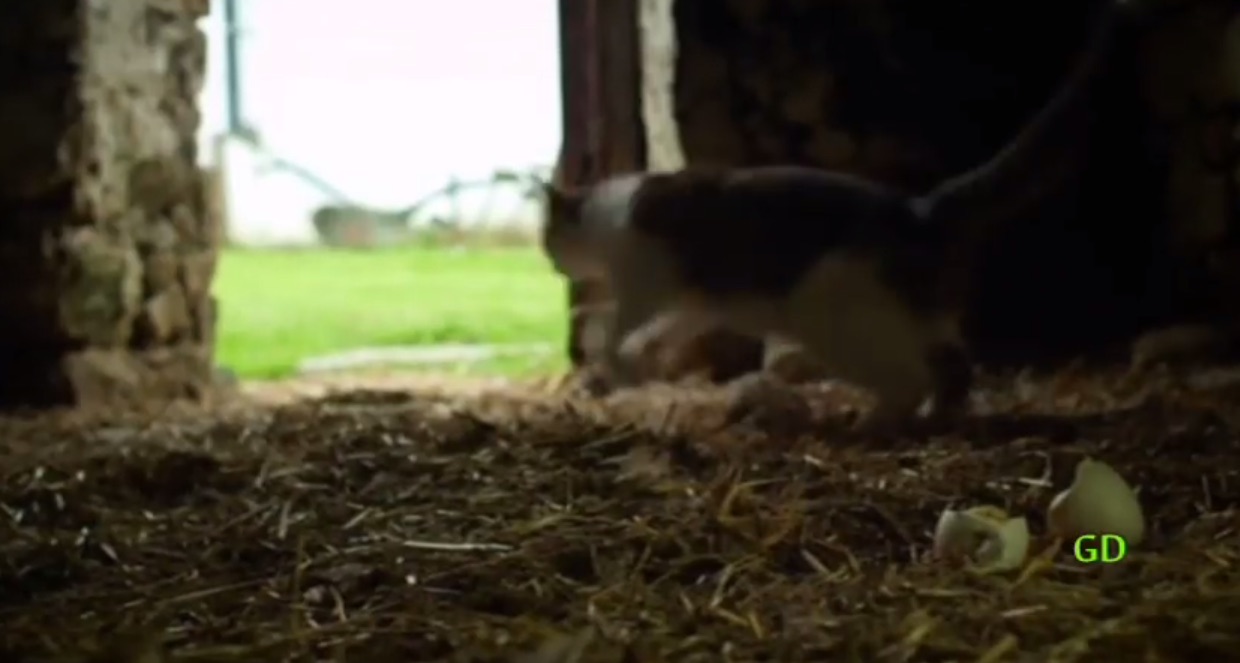 Having no idea about what happened with the ducklings, negative thoughts started attacking their mind and stress started building up. Just then they got a sign to draw conclusion, they saw their pet cat, Della, suspiciously sneaking off the barn.

When the duo were not able to track their ducklings they saw the mysterious Della sneaking in the barn through a pigeonhole. Ronan said, “Within seconds of that [not being able to find the ducklings], the cat jumped down from a pigeonhole in the shed over there, and I can put one and one together. I just presumed the cat had swallowed up the ducklings.” 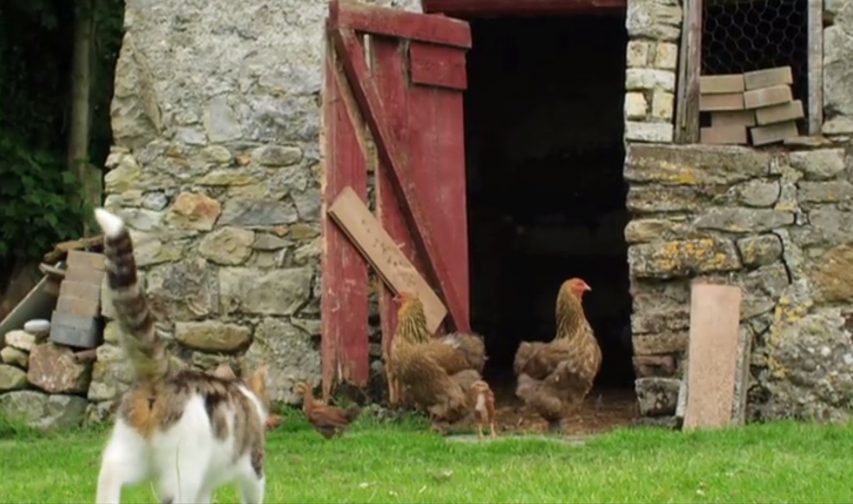 Ronan and Emma searched their farm for six hours but couldn’t find a sign of their lost ducklings. They began to lose hope but continued checking every corner of the farm desperately for their baby ducks. 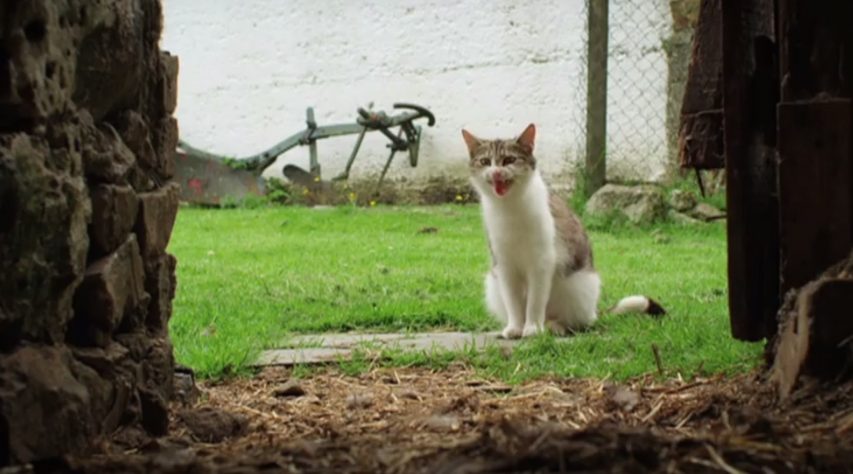 The couple started losing their hope of ever seeing their baby ducklings back. Emma  added “Ronan thought there was no hope at all.” Ronan was getting assured that it was their pet, Della, who ate all the ducklings. Now they started searching for Della to get this confirmed. 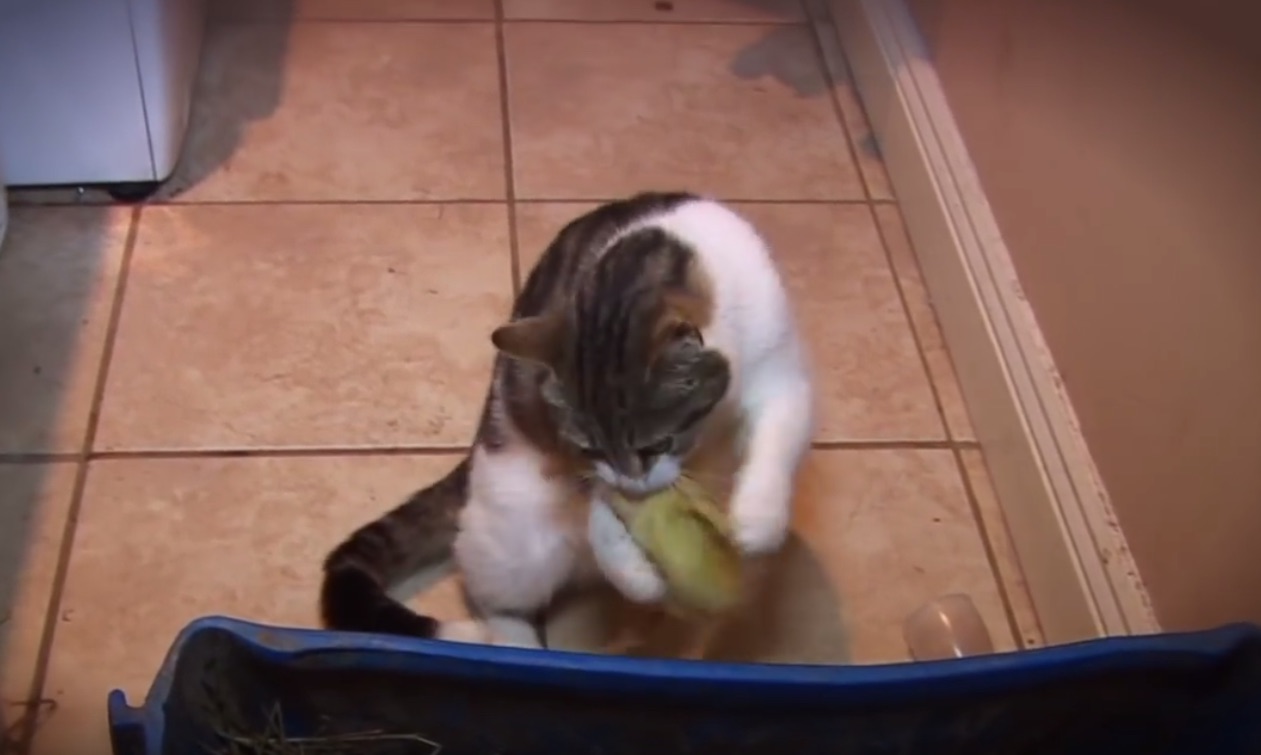 After the tiring search, this wasn’t a good news as well.

12. Ronan appears to be right 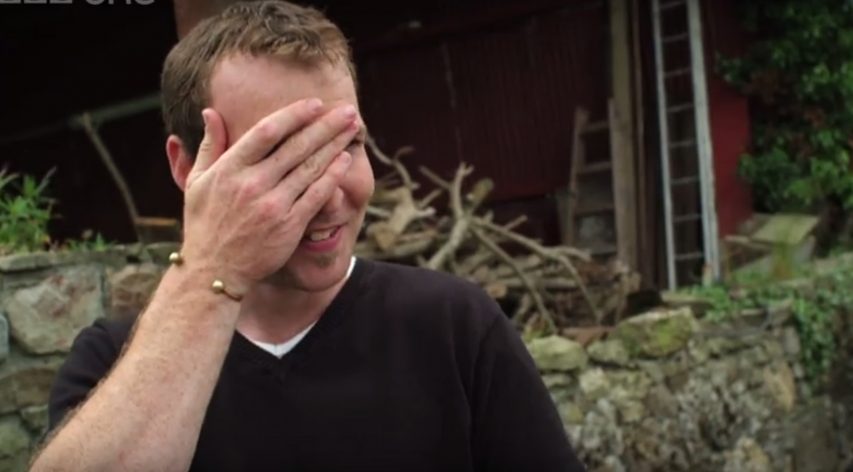 “The cat had a duck in her mouth at this stage,” Emma said. Ronan after getting an affirmation about his conclusion added: “Oh no, We’re only getting them back, and now she’s going to eat them right in front of us!”

But things weren’t that simple and easy to predict and shortly Emma noticed something that will change their view towards Della drastically.

11. All ducklings with Della!

The couple found all the ducklings with Della. But they soon realized that Della wasn’t attacking them or considering them as a meal. Trying to experiment a little, Ronan picked up a duckling and placed it right in front of Della. Della reached out and then did something astonishing… 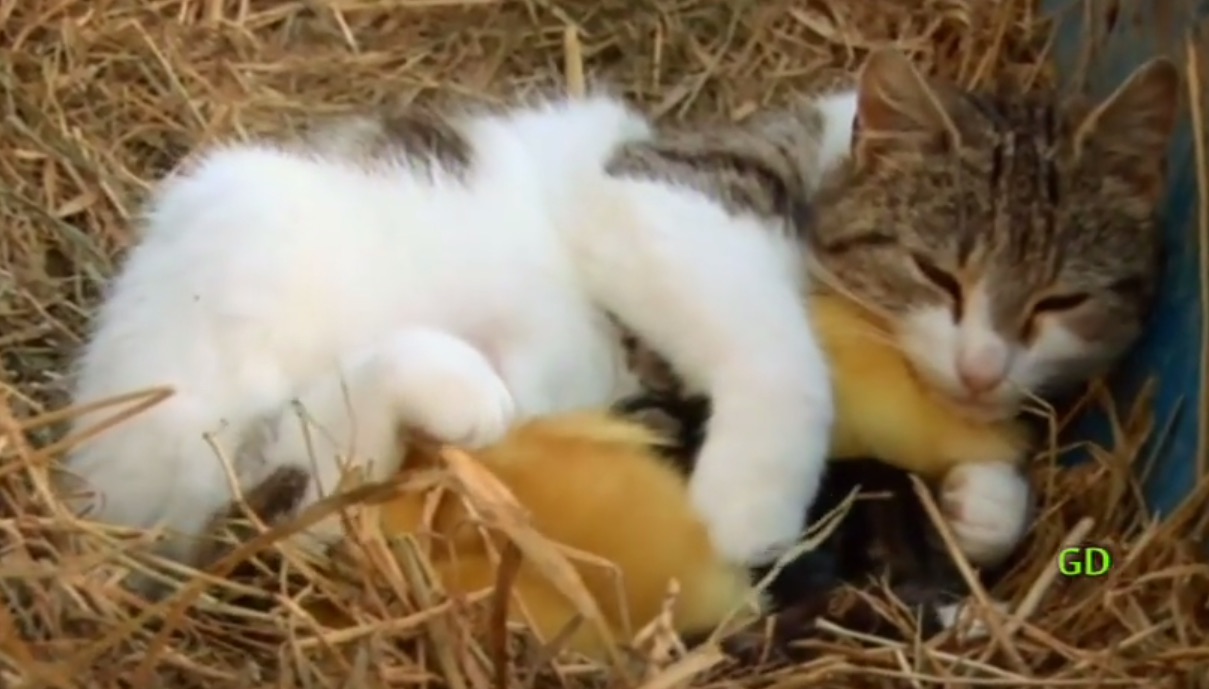 There was a surprising outcome to the experiment, The cat didn’t swallow the little ones instead she loved her like her own. Highly surprised Ronan said “The three little ducklings waddled straight underneath Della, The cat laid down on her side, put her paw over one of the ducklings, and was kind of nursing the duckling… it was incredible to see it.” 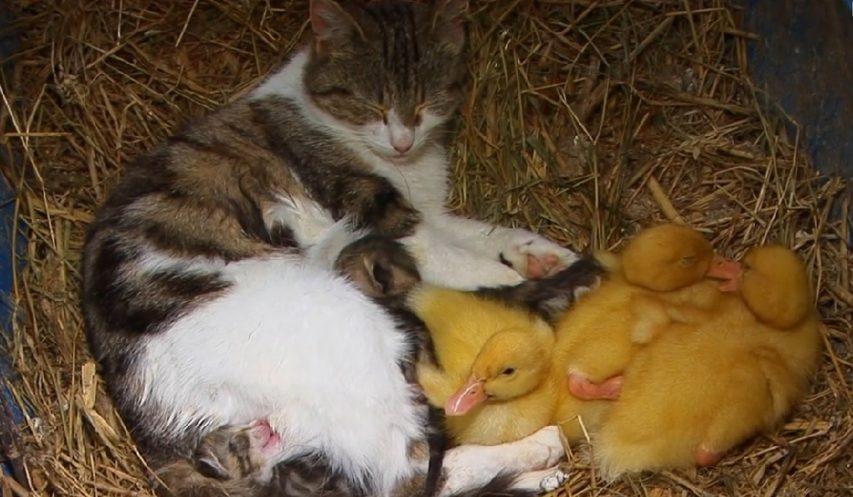 The above pic is a treat for our eyes. But what Ronan and Emma found next was even more impressive…

8. Della turns into a mother 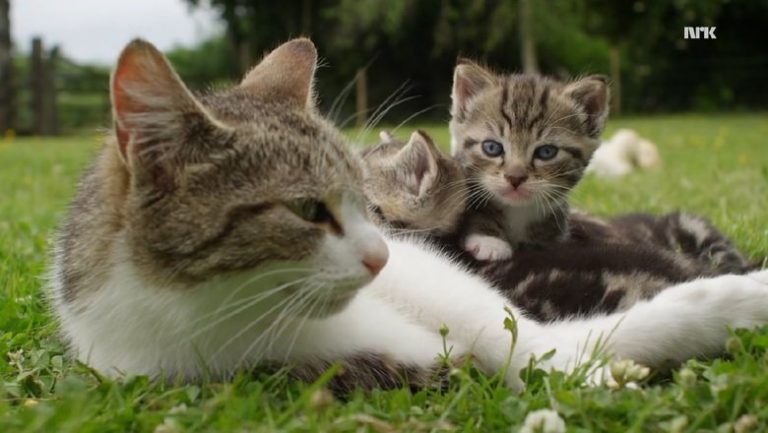 The couple found that Della had just given birth to kittens. This happened just a few hours before she found the ducklings. This is where her “Mothering hormones” kicked in and ended up saving the little ducklings’ lives.

7. Mother of ducklings too! 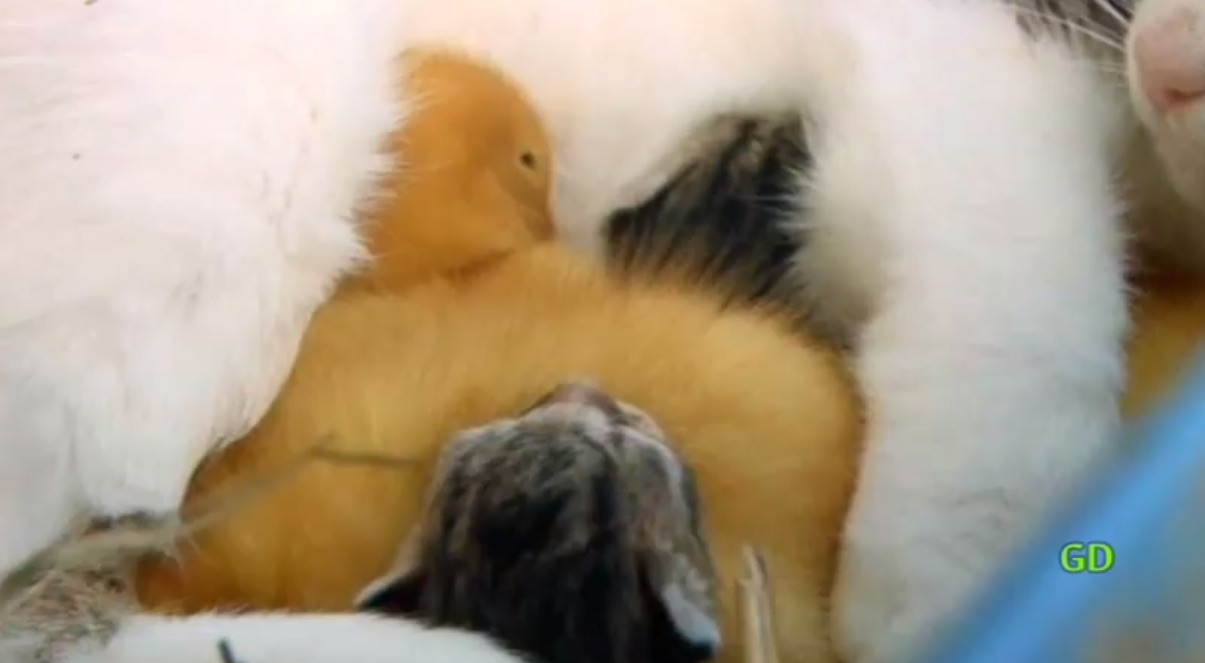 Della instead of eating them considered the ducklings as her own babies. And the orphan ducklings looked like they got a new caring mom. 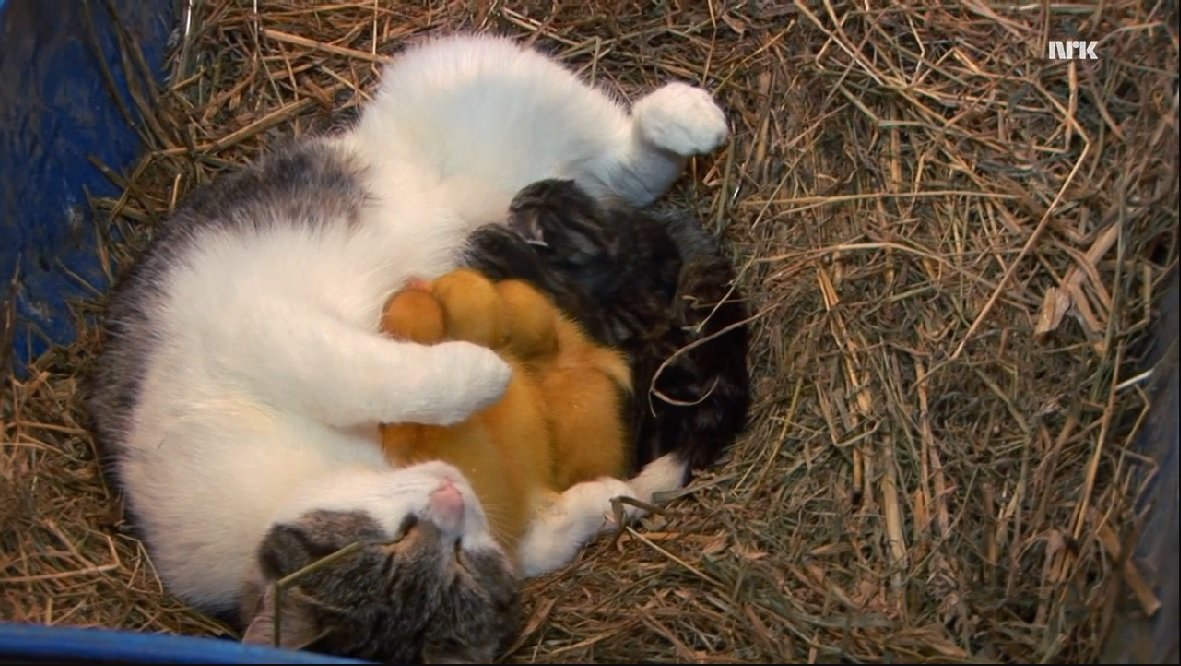 This might seem to be truly unbelievable but Della was even breastfeeding the ducklings!

This is something that even a mama duck can’t do. Ducklings are responsible for searching for their own food just after their birth. But with a caring mum like Della, they even learned how to suck and breastfeed. 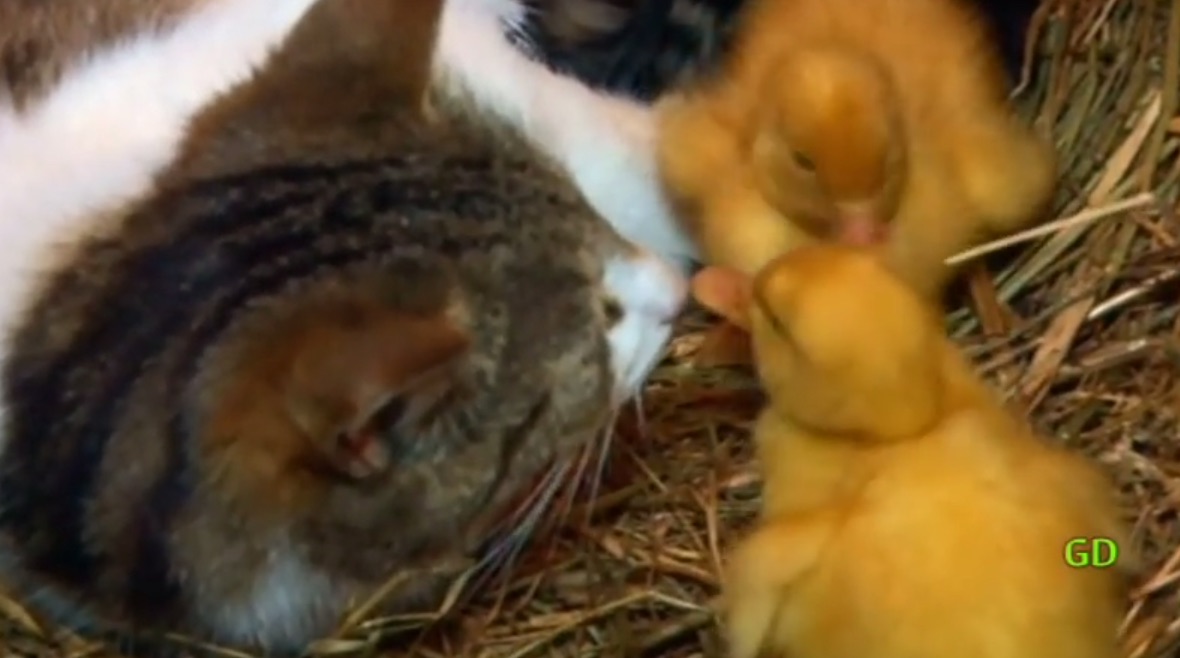 Ronan was still fearful that Della would eat the ducks for dinner, but his wife Emma wasn’t. She has experienced the bond between a mother and her newborn and how it looked like, she was seeing similar signs with Della and her baby ducklings. 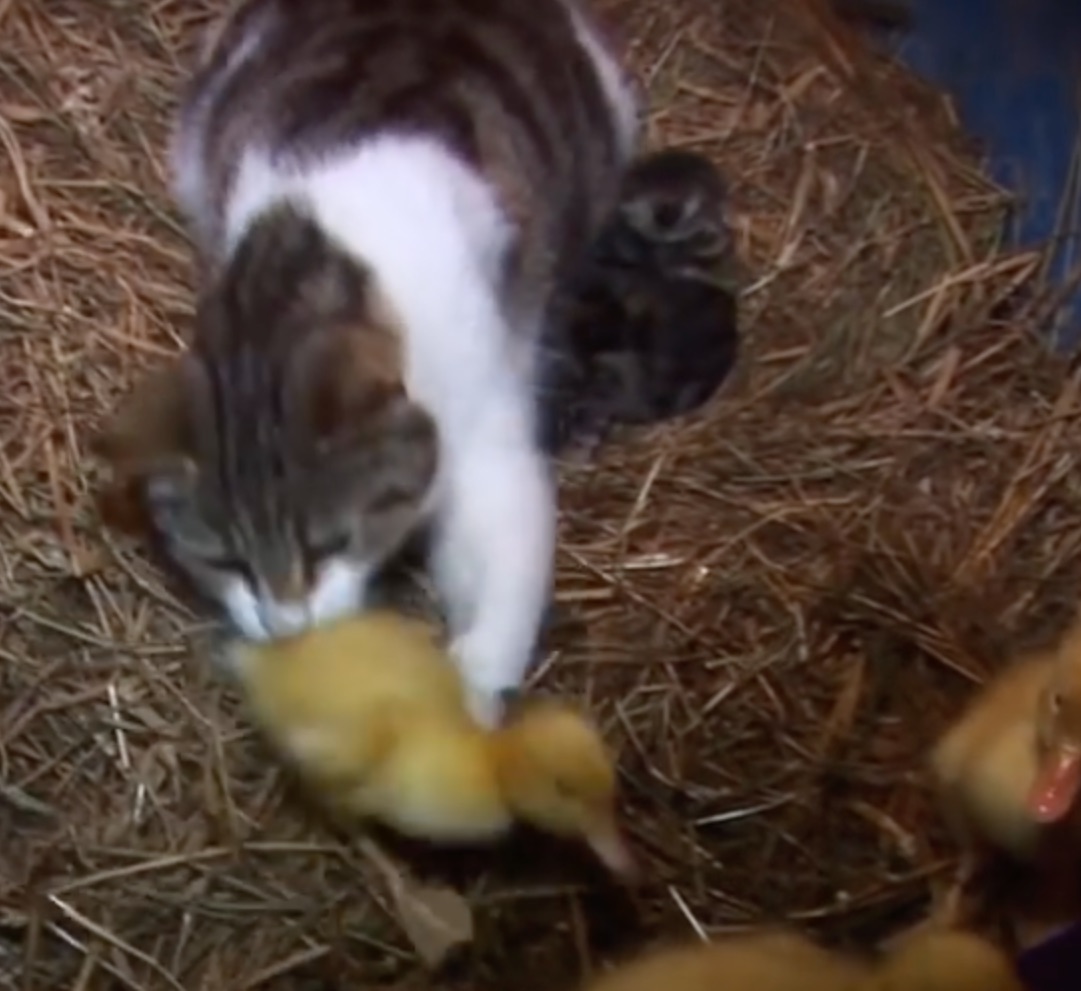 Della’s story soon went viral over the Internet. People fell in love with the affection the cat had for her feathered babies. 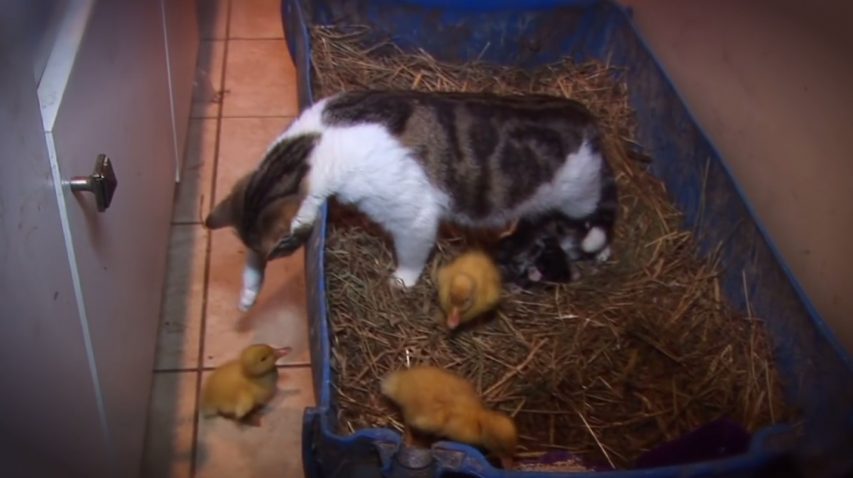 Della fulfilled all the responsibilities of a mother. She always made sure her babies were fed and even cheered them up some playtime. She would play very gently with the ducklings and now even Ronan grew up in confidence for her maternal instincts. 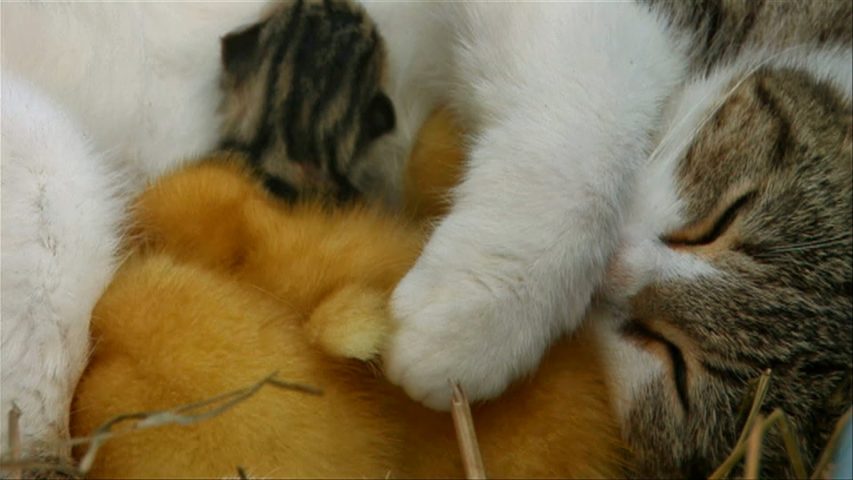 This wasn’t just a typical cat and duck relationship. Nobody would have believed the bond between the mother cat and her baby ducklings, thankfully it was perfectly captured by Ronan and Emma. 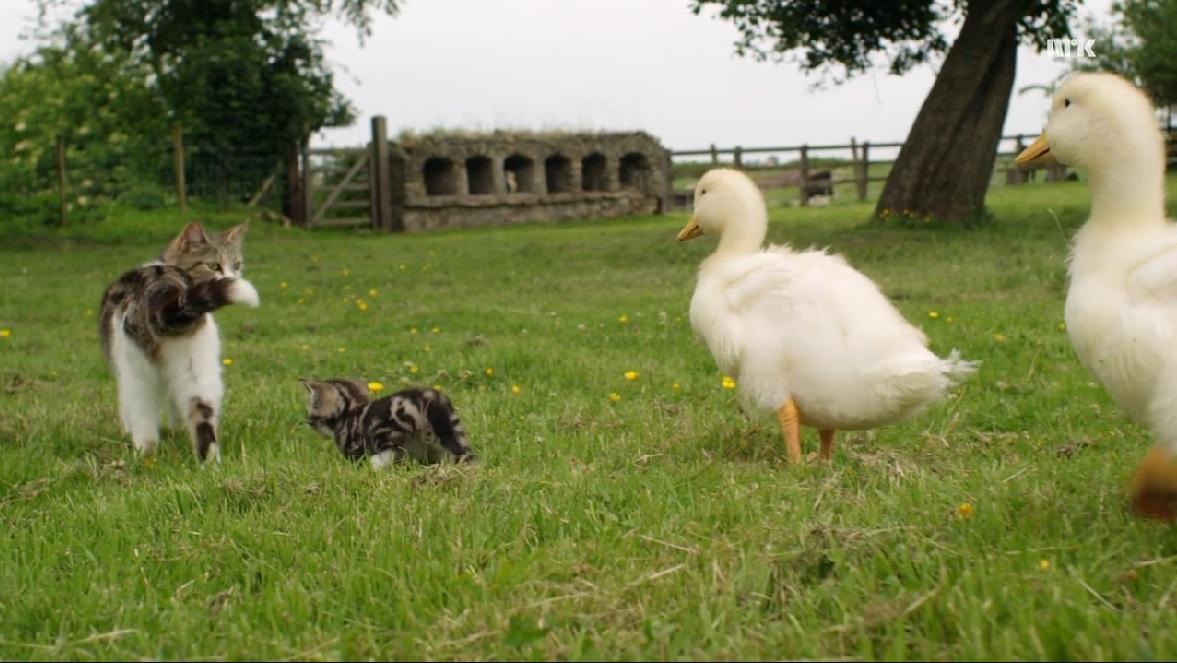 Even when the ducks grew bigger, way bigger than Della’s little kittens, the bond between them and Della didn’t change. They still spent a lot of time together in the farm. The orphan ducks didn’t forget the love showered upon them by Della and keep on cuddling her back in their youth. A happy ending to a delightful story!