Disneyland is one of the happiest places on earth and if you don’t believe us then let these dogs change your mind! This group of service dogs were photographed having a grand day at Disneyland and the photos taken of them are way too cute. Your heart will melt when you see just how much fun these pups had! 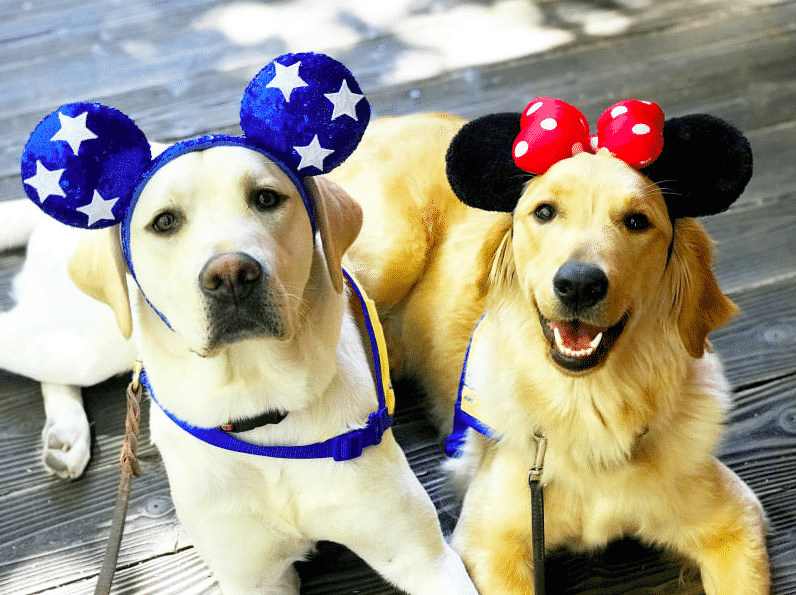 A group of dogs were taken on a fun field trip to Disneyland. It was definitely a trip that they will never forget! But, the pups weren’t just there to have a good time. 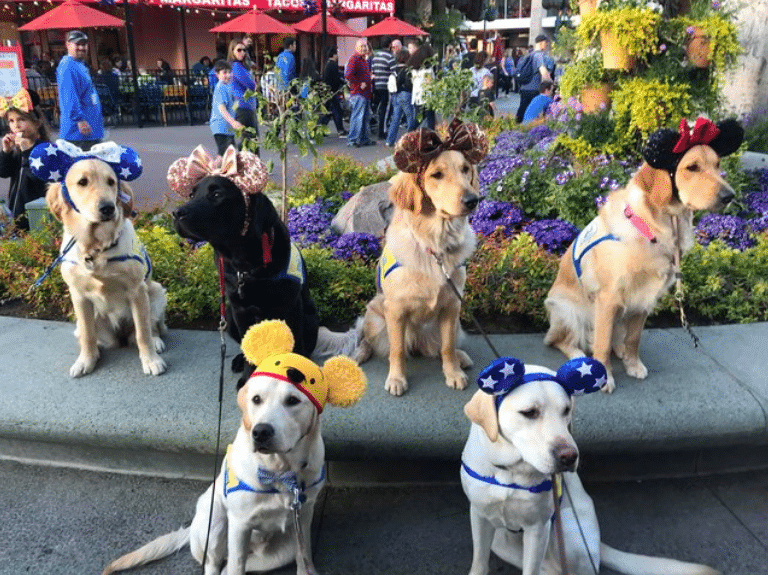 The dogs happen to be a part of Canine Companions for Independence, a “nonprofit organization that provides no-cost, highly trained assistance canines to help people with disabilities.” The dogs were at Disneyland as part of a training program. 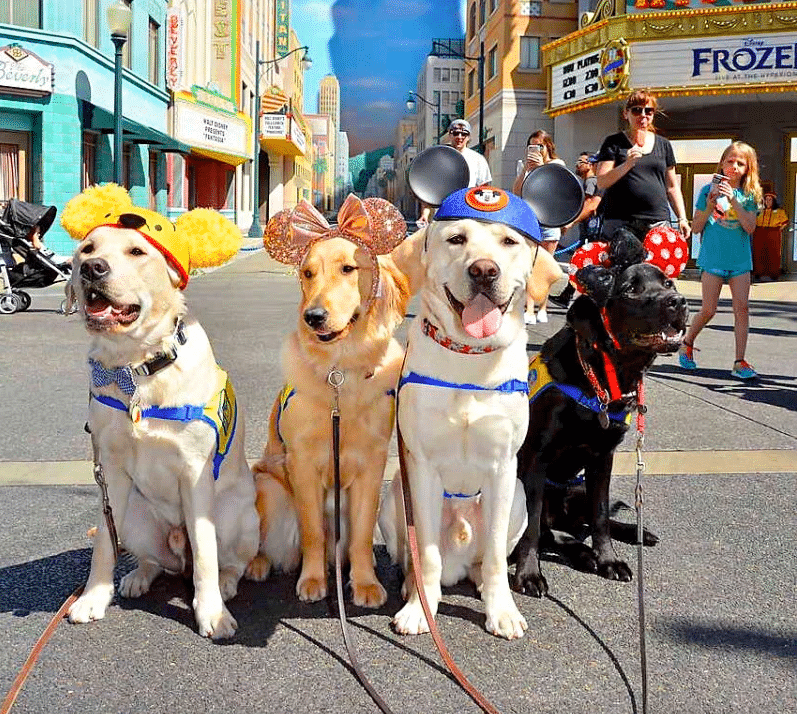 So you may be wondering, why would the dogs be taken to Disneyland as part of a training program? Well, the park happens to provide the pups with the perfect challenging environment to navigate through. This helps teach them patience and navigation skills. 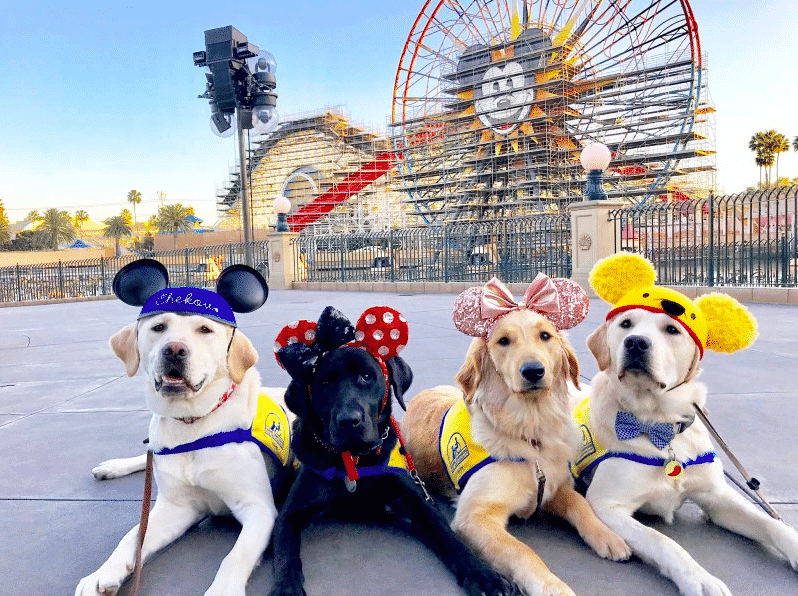 “Disneyland is the perfect place to socialize our puppies to crowds, loud noises, different sights and smells, and different kinds of people,” Kendra Clark, who helped organize the trip, told The Dodo. The pups are continuing to learn and the Disneyland trip was the perfect way to combine work and play! 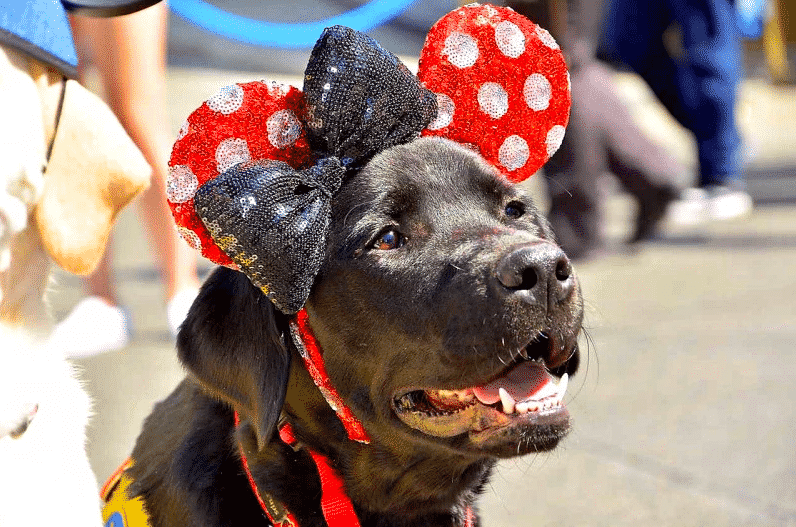 Despite having to be there for a training session, the dogs still managed to have a super fun time at the park. There are a ton of highlights from the trip and your heart will absolutely melt when you see just how cute the dogs looked at the theme park. 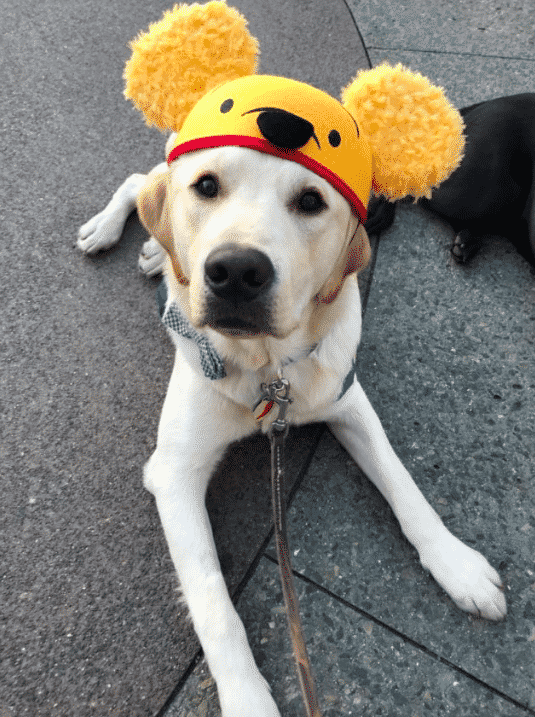 “The pups absolutely loved walking around the park,” Clark said. “They posed in photos with their Mickey ears and ate up all the attention they drew from the crowds.” 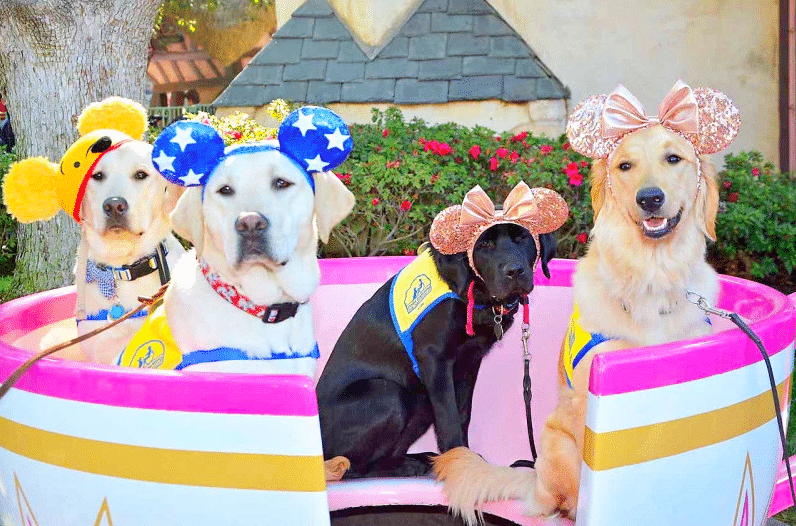 The dogs had a lot of fun getting on the rides! No Disneyland trip would be complete without taking a spin on the teacups. Look at how happy they all look! 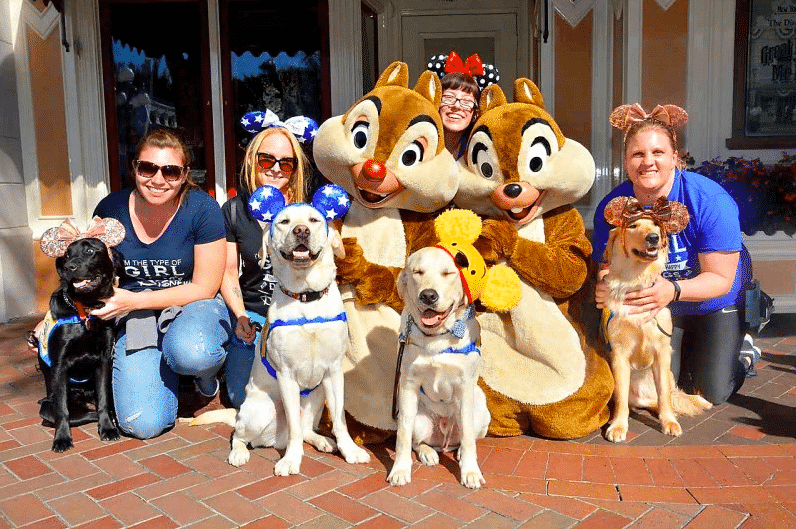 The dogs even posed for photos with some of the most memorable characters from Disney films. Just check out this one pup with Chip and Dale. You can’t deny the smile on his face! 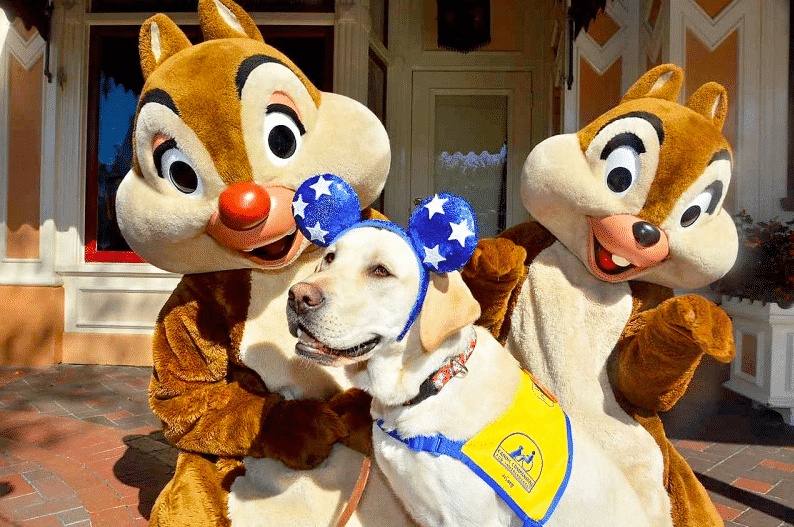 “Seeing how happy they got when they met the characters sure was a treat!” Clark said. “The characters were almost as excited as the dogs were to say hello!” 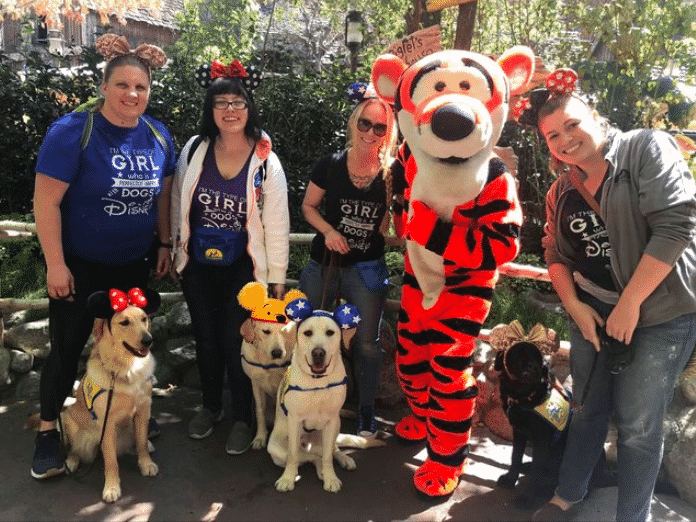 There were a ton of passerby that fell in love with the dogs immediately. Everyone couldn’t get enough of the dogs walking around in Mickey Mouse ears. One woman was completely smitten by them from the start… 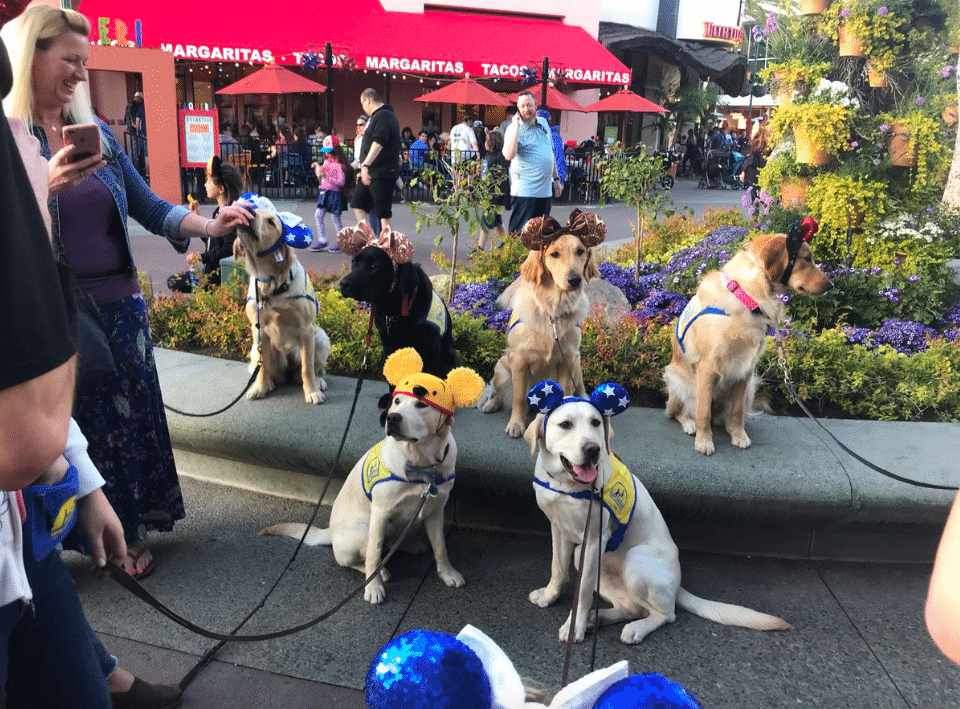 Nicole Brown was walking around Disneyland when she spotted the pups. Instinctively she ran over to them and knew she had to take a closer look. She was thrilled to see the dogs having a grand old time. 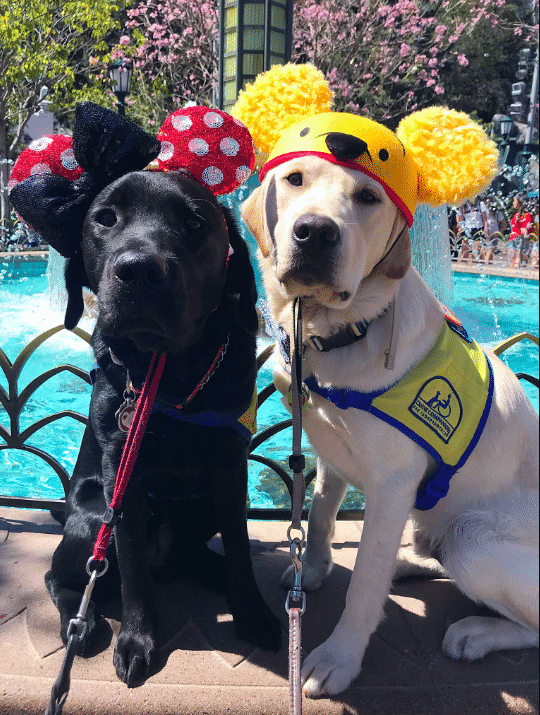 “I have always been a dog person, specifically Labs and golden retrievers. But to see them at Disneyland with Mickey Mouse ears was the cutest thing,” Brown told The Dodo. Brown couldn’t help but take photos of the adorable dogs… 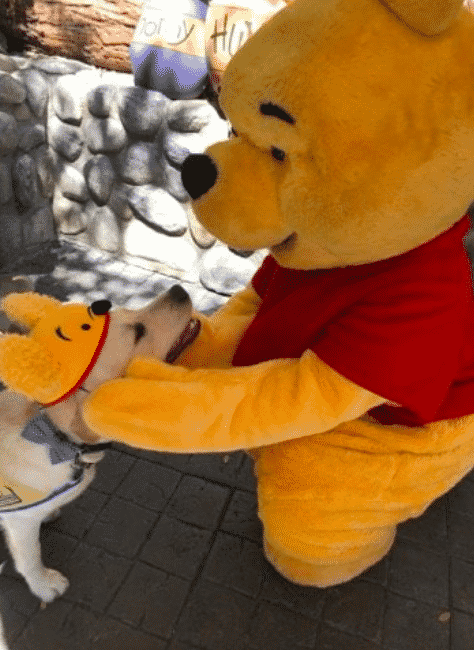 “You could tell they were so happy to be there. They were loving all of the attention they were getting from both tourists and the Disney characters,” Brown went on to explain. Then she decided to share her encounter with her social media followers on Twitter! 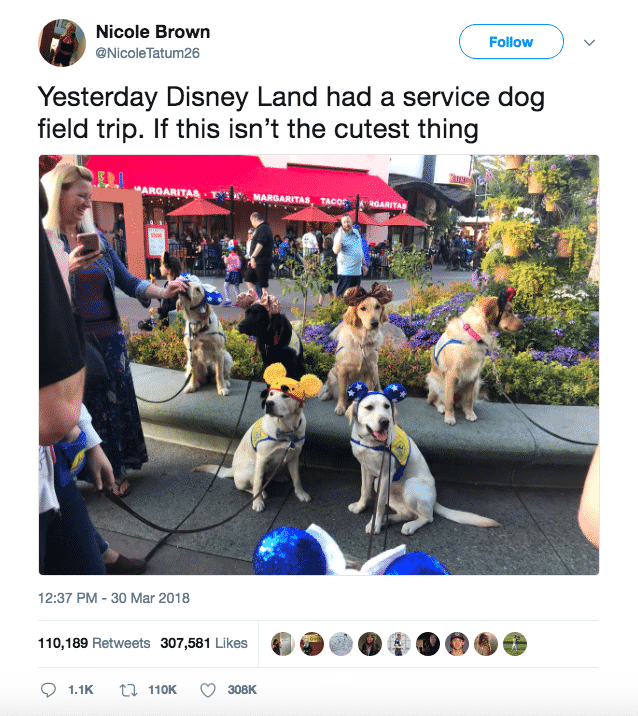 Brown decided to post a photo of all of the dogs on her Twitter account. She captioned it saying: “Yesterday Disney Land had a service dog field trip. If this isn’t the cutest thing.” The post, of course, immediately went viral. 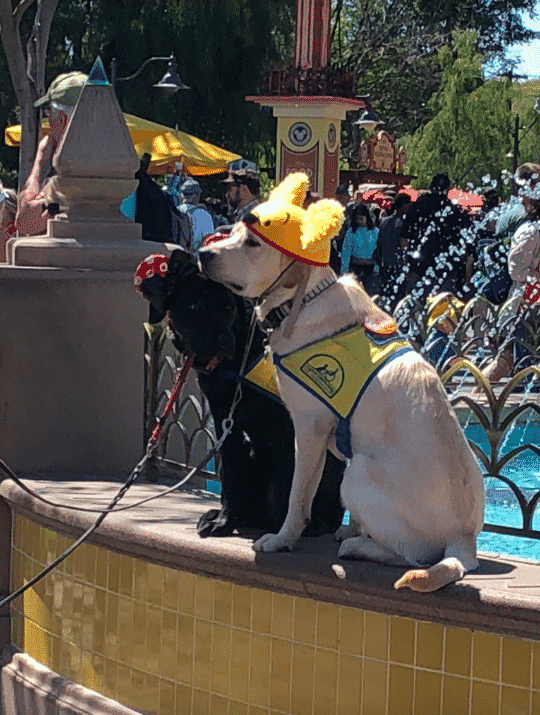 Everyone on social media went wild over the photo! The post has since received over 100,000 retweets and over 300,000 likes. People were going crazy over the cuteness and many were envious that they weren’t there to witness the cuteness in person. 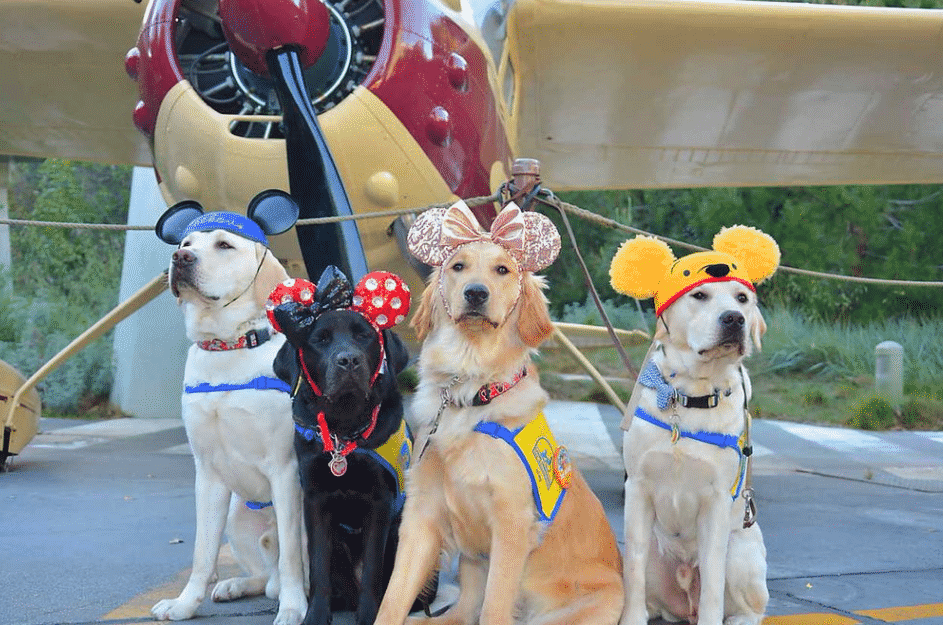 The group has deemed the trip a great success as the dogs were able to figure their way around and gain the necessary skills to help others. Not to mention, because the dogs looked so cute the organization was able to get more publicity and recognition! 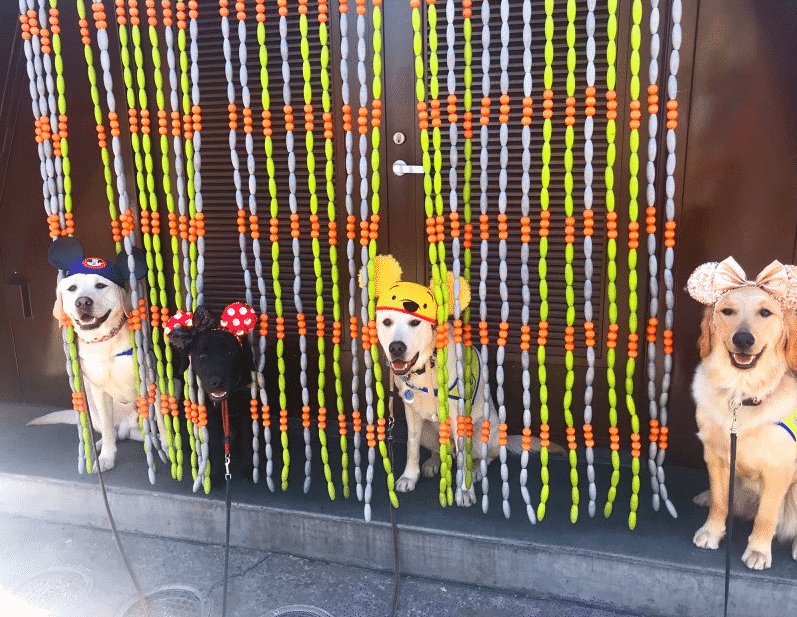 “As puppy raisers, part of our job is educating the public about service dogs and Canine Companions’ mission,” Clark said. They definitely managed to do so as so many people would come over to the dogs and ask questions. Clark was thrilled about how interested everybody was. 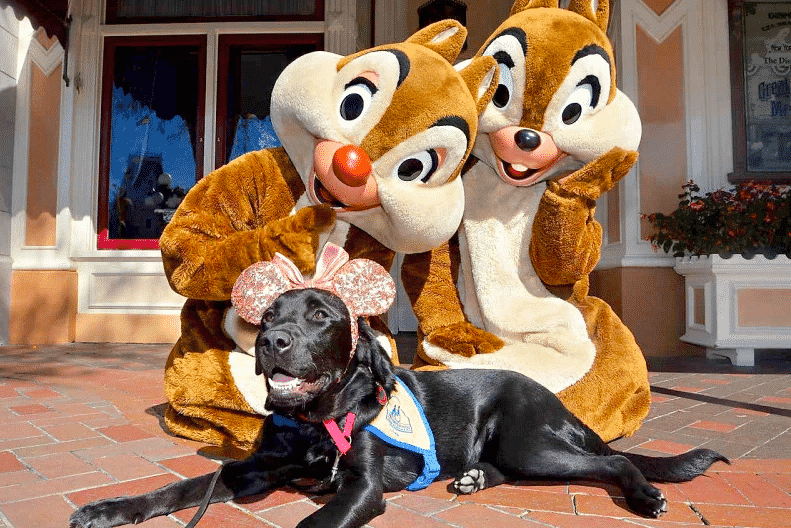 “So it was really wonderful that the crowds were not only incredibly interested in our service pups in training, but also so respectful of the fact that they were working,” Clark continued saying. So did the dogs really enjoy themselves after all? 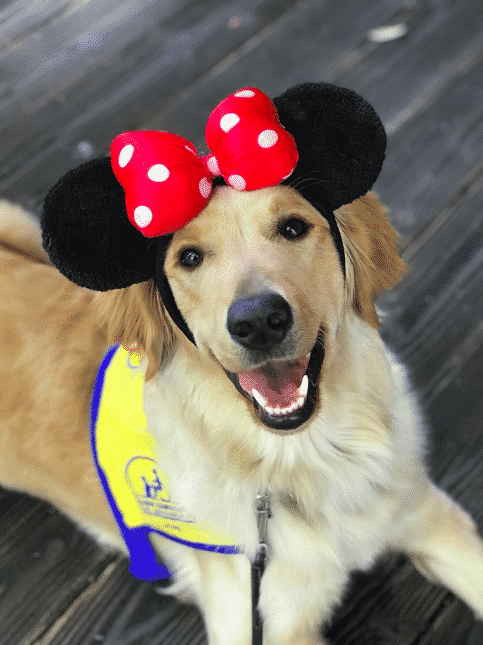 The dogs had a blast! They loved being able to interact with people and going on all of the rides. They also got to sharpen up their skills for their work, which was an added bonus. 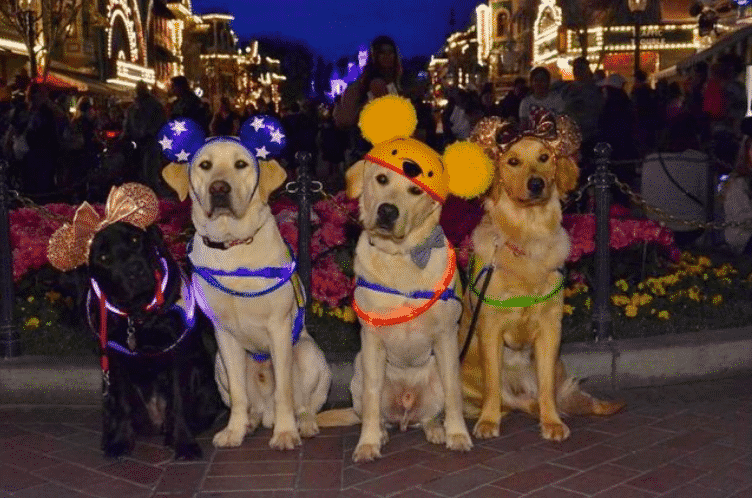 It’s amazing to see an organization work so great to make sure that their animals are trained in the best way possible. Now these dogs can better service someone and they had a great time learning how to do so!