Normally when you think of getting a pet for your family, you would think to get a dog, a cat or even a goldfish. But for naturalist Casey Anderson, owning an 800-pound grizzly bear didn’t seem too out of the ordinary. 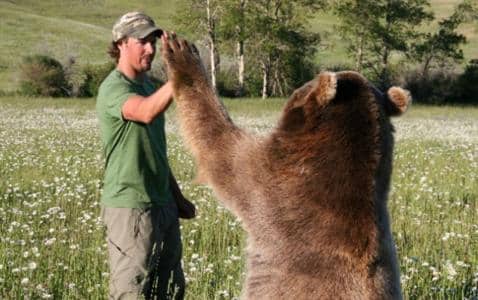 Casey Anderson adopted and raised the baby grizzly bear, which he named Brutus. The bear had been abandoned in the wild by his mother and when found, he was taken to a wildlife reserve where he faced being destroyed due to overpopulation. 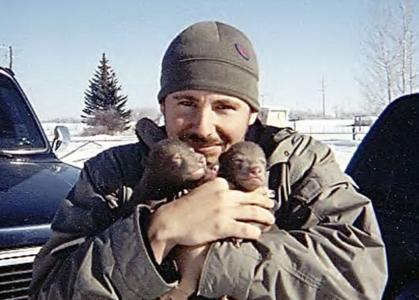 Anderson quickly swooped in and gave the baby bear a second chance at life. The pair has been completely inseparable ever since! Brutus even played a very important role in Anderson’s wedding…

18. Best Man at the Wedding 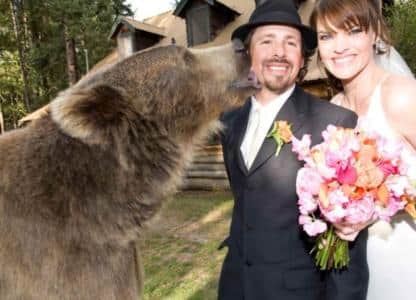 Brutus and Anderson became the best of friends. They were so close that Anderson had Brutus stand up for him as his best man when he was wedded to actress Missy Pyle.

But what did Missy think of this, you might ask??

17. He Belongs in the Family 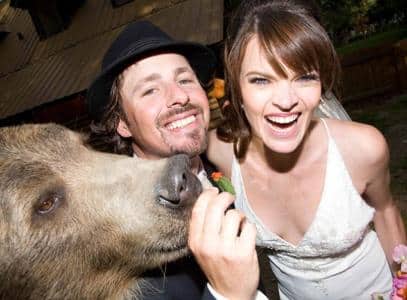 Even though Brutus was a bit of a third wheel, Missy wouldn’t have it any other way! She has also developed a very close relationship to Brutus and he has even starred in some of Missy’s movies! Not to mention, he also gets invited to family dinners… 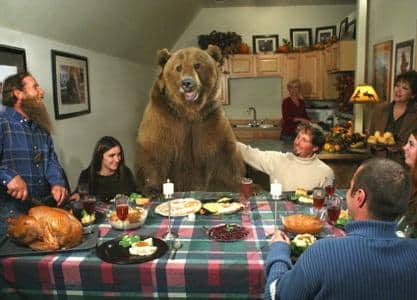 Brutus absolutely adores people and being around them. He is very gentle and his table manners are arguably better than some humans! Hence why he is invited to the table at the Anderson’s Thanksgiving holiday meals.

Don’t think this image is real? We’ve got the real truth and nothing but: 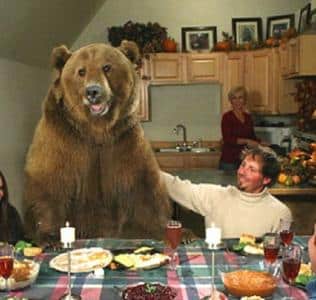 Some people have argued that the images of Brutus appearing with Anderson and his family at the dinner table have been photoshopped. However, the Anderson’s along with National Geographic have affirmed that the images are authentic originals and they have not been manipulated.

But why would anyone own a grizzly bear, let alone have one sitting at their dining table? Aren’t they dangerous? 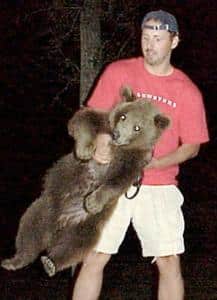 In an interview with Good Morning America, Anderson said that most people assume that grizzly’s are dangerous and bloodthirsty creatures who will attack humans if given the chance. However, this is a huge misunderstanding. They are actually very playful as cubs and show affection to those who care for them.

‘It’s the biggest misconception. When you hear about a grizzly bear, it’s because they have done something wrong.’ Anderson said. 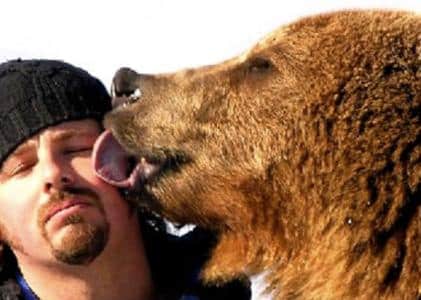 Grizzly bears are Anderson’s passion and he will stop at nothing to properly educate the public on how important the species is and also about the importance of preserving their natural habitats.

This is why Anderson has set out on an important mission… 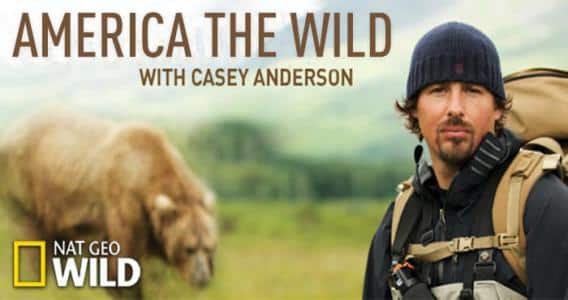 Anderson and Brutus have begun a mission along with National Geographic to educate the public through a documentary which aims to bring awareness to the bears of Yellowstone Park.

“We’re trying to cure the myths, educate the public,” said Anderson. He also added that there is a way to live peacefully with these creatures, although humans will have to play by the rules. 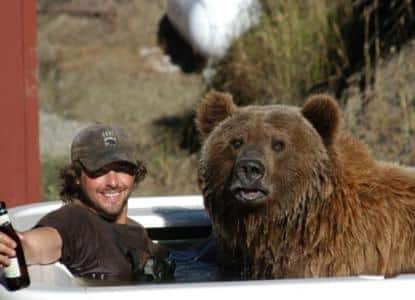 Anderson has committed himself to Brutus and to his year long mission in filming the documentary because he is so passionate about these animals. He argues that they are actually quite similar to humans. They are smart, they have personalities of their own (Brutus has a pretty quirky one!) and they are compassionate. He says that they are even capable of crying tears.

And if you’re not convinced, just wait until you read how far Anderson is willing to go to prove the stereotypes about grizzly’s are false! 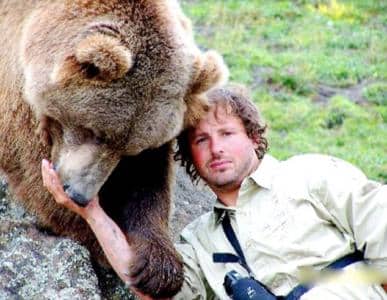 In the National Geographic documentary, Anderson dives right into the thick of it by living alongside the grizzly bears of Yellowstone Park. He believes that this is the only way to truly observe them in their natural habitat: to live as they live. Anderson was willing to live for months in the extreme conditions the bears face and even altered his diet to mimic the food the bears ate throughout the season.

But why would anyone commit to living like this for months on end? 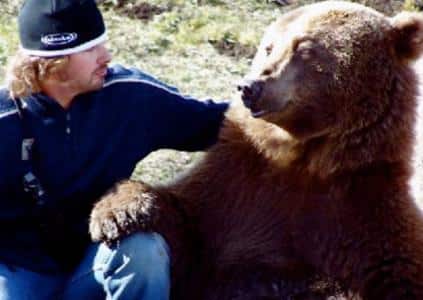 Anderson developed such a close bond with Brutus that he felt it was his duty to bring awareness to and take action in preserving a future for grizzly bears. That’s why Anderson opened the Grizzly Encounter Animal Sanctuary in Montana, USA.

8. Life at the Sanctuary 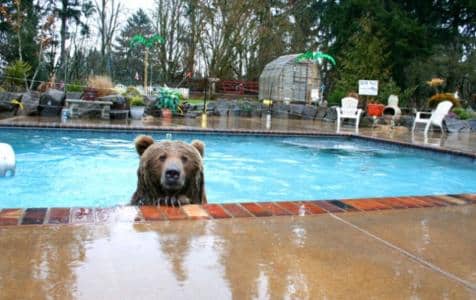 Anderson refused to let Brutus be destroyed by the reserve he rescued him from and decided that he would create a sanctuary of his own in order to save other bears from being destroyed or being locked in captivity.

Now Brutus along with other grizzly’s are able to roam the sanctuary freely and swim as they please. 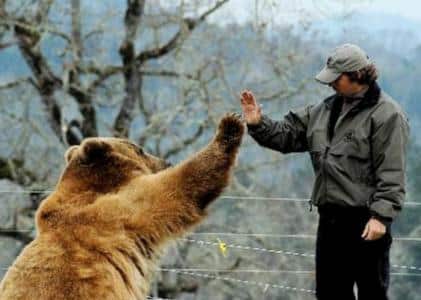 The most important thing Anderson wants out of this is for Brutus to “act like a real bear”. He does not want to domesticate him or take away from his character. He wants him to live in the sanctuary as he would live in the wild. Of course there would be more human interaction at the sanctuary than there would be in the wild. But this is very important for the development and teachings of human and bear interactions and for educational purposes. 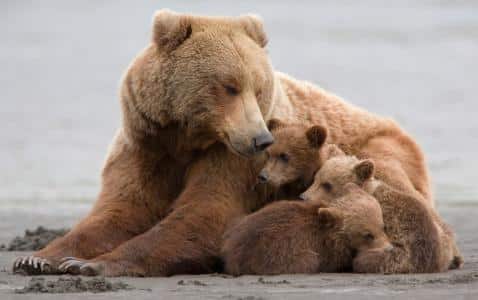 5. They Are NOT Man-Eaters 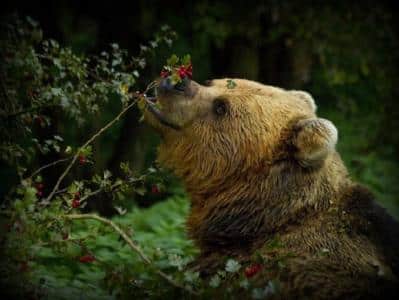 Generally, they are not interested in humans so long as they are left alone. And just to clarify, bears are not “man-eaters”. Their diets consist mainly of berries and roots, meaning that they are for the most part vegetarians. Although, they have been known to eat fish and to savenge the remainings of what other animals have killed and left behind. 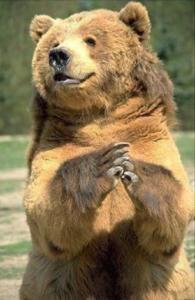 Grizzly bears consume nearly thirty-five pounds of food every day in order to survive. This is important to their health as they can weigh up to twelve hundred pounds and they need to sustain themselves. That’s a lot of berries! 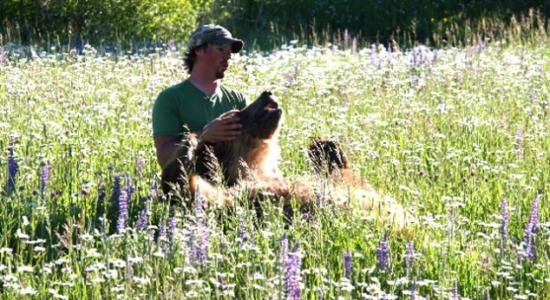 You can believe that Brutus gets all the berries he could ever want at his home in the sanctuary with his best friend. Not to mention the Thanksgiving turkey and other special holiday meals that the Anderson family puts on.

2. Part of the Family 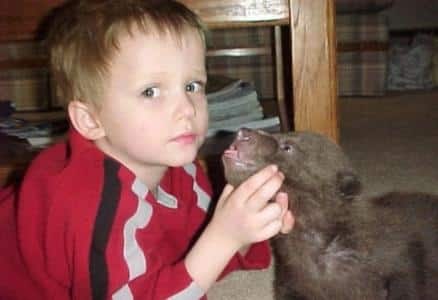 Brutus has taught Casey and Missy Anderson how loving and compassionate grizzly bears can be. He has always been very gentle with them. He certainly has become a welcome addition to their family and will live out his life comfortably under their care. 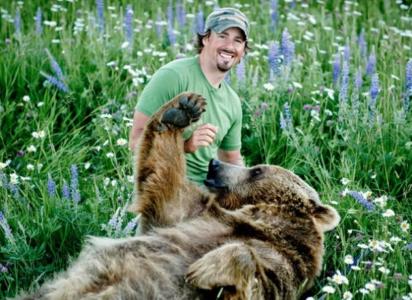 These two best friends forged a lifelong friendship and they couldn’t possibly imagine living life without each other.