Bear Cub Walks Into Family’s Garden, Hugs The Dog When He Tries To Bark And Alert The Owners

What would you do if a bear cub walked on over into your garden? Well, one family living in a Slovenian village got the chance to find out. This bear cub wandered into the family’s garden and when the family dog was about to alert them all, the bear quickly took some action. You won’t believe how this crazy story turns out. 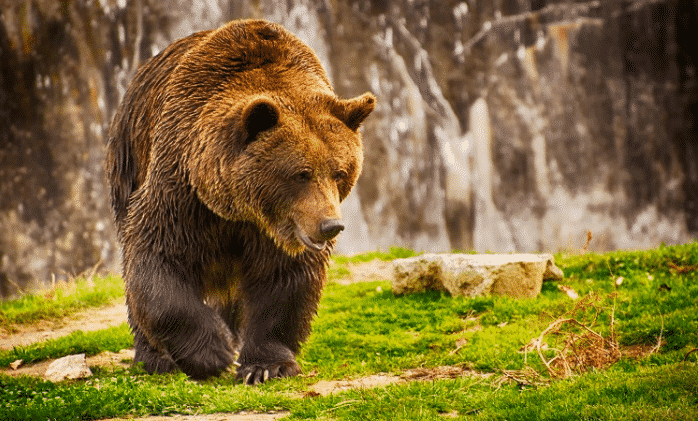 It’s no secret that brown bears can be downright scary. These bears can grow to be over 1,500 pounds and are a well-known carnivore. They are scattered all throughout North America, Asia, and Europe and one bear, in particular, found himself wandering around Slovenia. 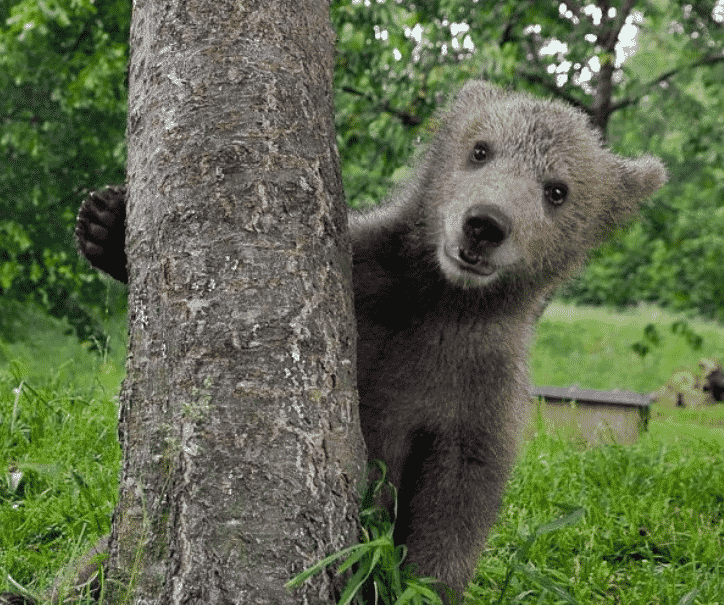 Meet Medo, a three-month-old brown bear cub. Medo was abandoned by his mother and had nowhere to go. He was all alone in the world and was looking for a place where he could find shelter. 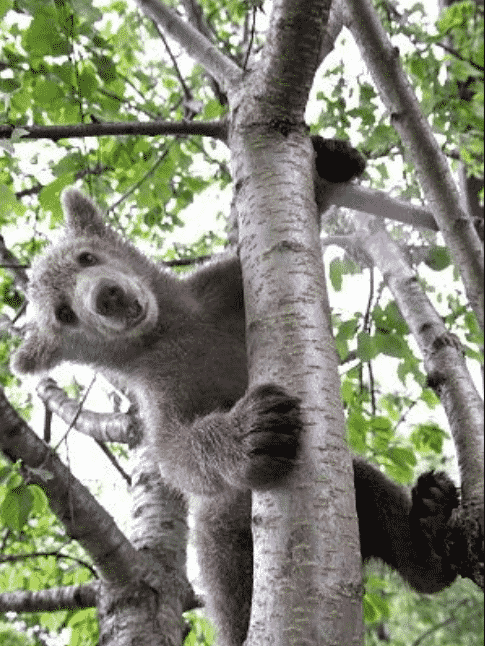 Medo was walking around when he stumbled across a Slovenian private. Medo, of course, had no idea that the property belonged to anyone. All he could tell was that there was a garden that he wanted to be in. 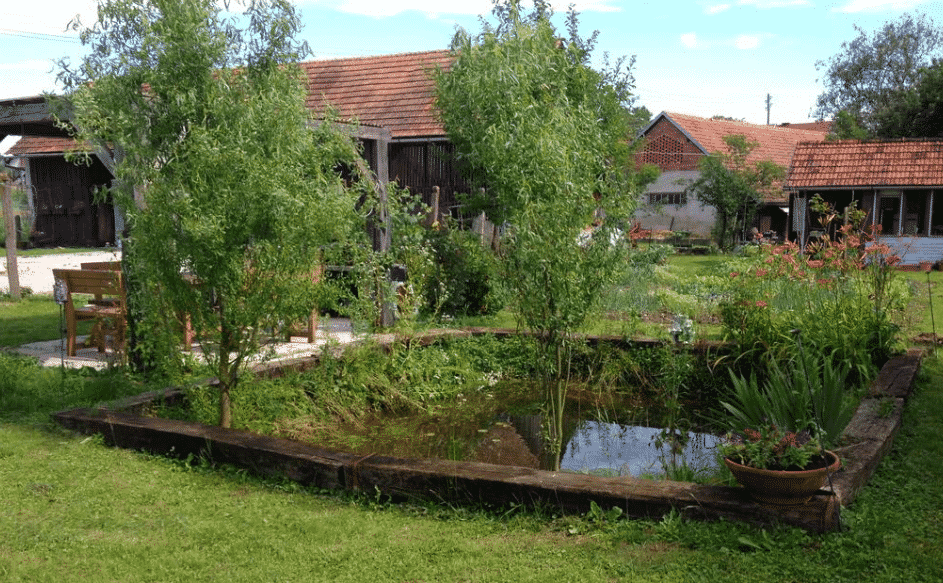 Medo decided to settle in and make himself home in the garden. The garden, however, belonged to the Logar family and they had no idea that there was a new guest making himself at home in their yard. That was until someone noticed him. 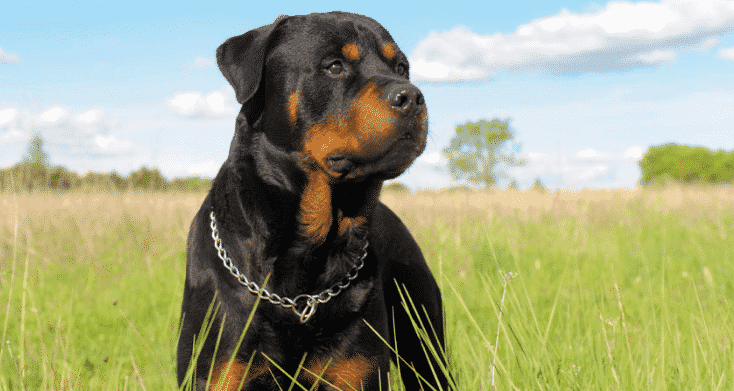 The Logar family happens to have a pretty huge family dog named Matevz. The dog is a Rottweiler and works hard to make sure that the family stays protected at all costs. Matevz was the first to spot the little brown bear. 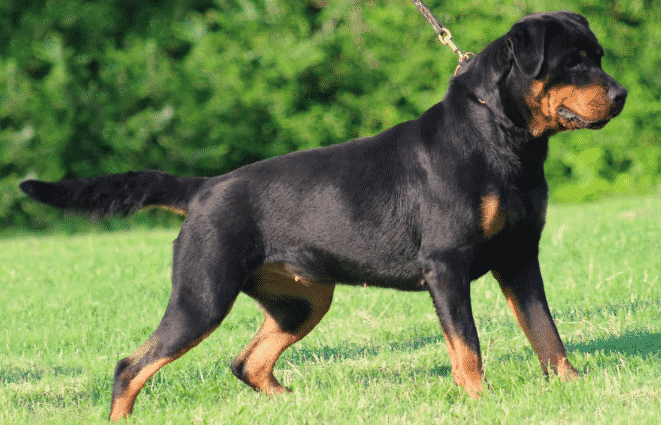 Matevz was heading out into the yard to run around like he normally would. At first, there was nothing really out of the ordinary in the yard. That was until the Rottweiler noticed an uninvited visitor. 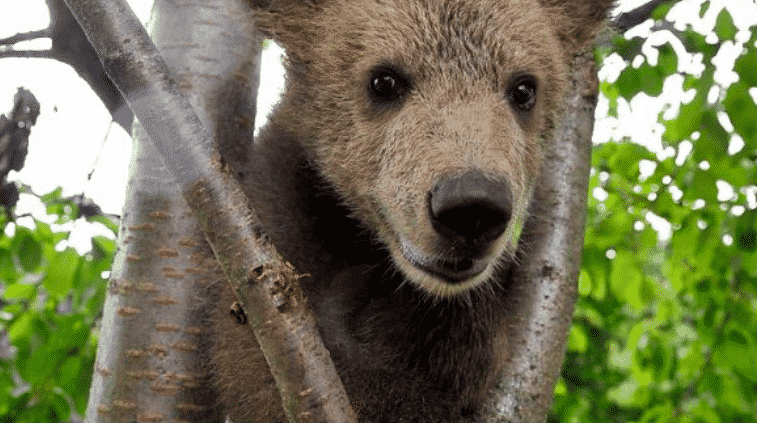 The Rottweiler soon made eye contact with Medo and the two stared each other down. They weren’t too far away from one another when Matevz was about to open his mouth to bark and alert his family. Then Medo quickly jumped into action. 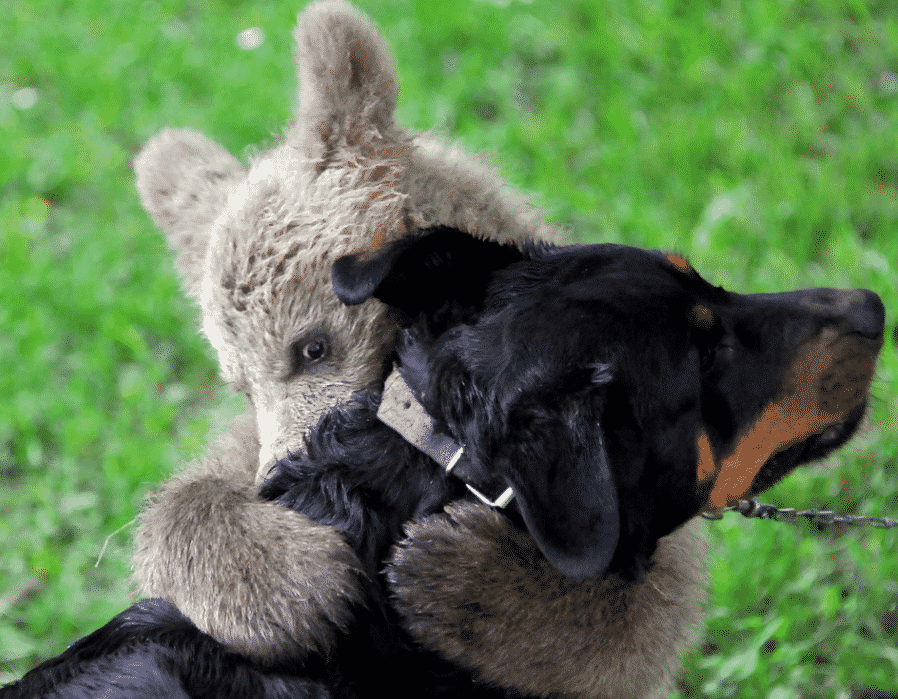 In order to show the dog that he meant so harm, Medo quickly went over to hug him. The hug seemed to calm Matevz down but the dog still lets out a loud enough yelp to show that something was going on. The family then went outside to see what all the commotion was. 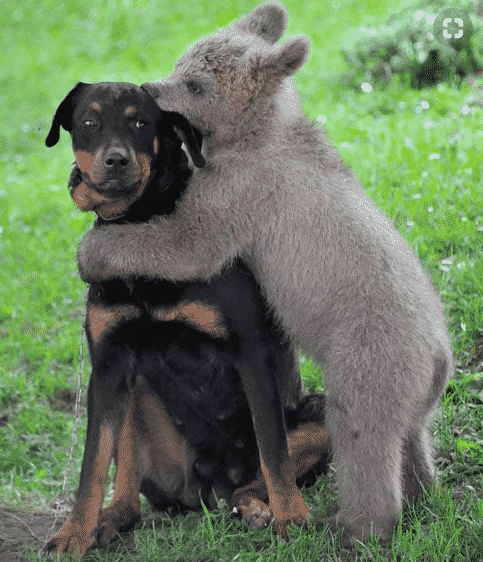 The Logar family went outside and were shocked to see the baby bear there, hugging their dog. From what they could tell, the bear seemed harmless and sweet. It was also apparent that the bear was orphaned. 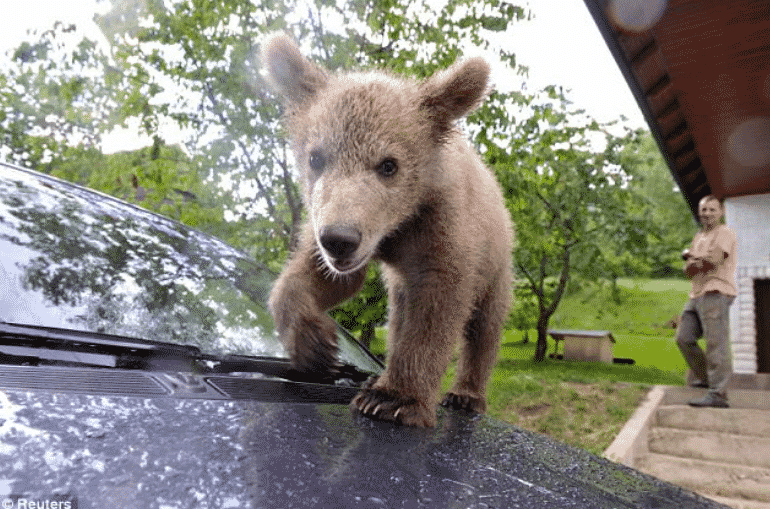 The family was faced with a serious dilemma. They couldn’t possibly leave this poor baby bear all alone to fend for itself. So the family made a group decision that would change their lives and Medo’s life forever. 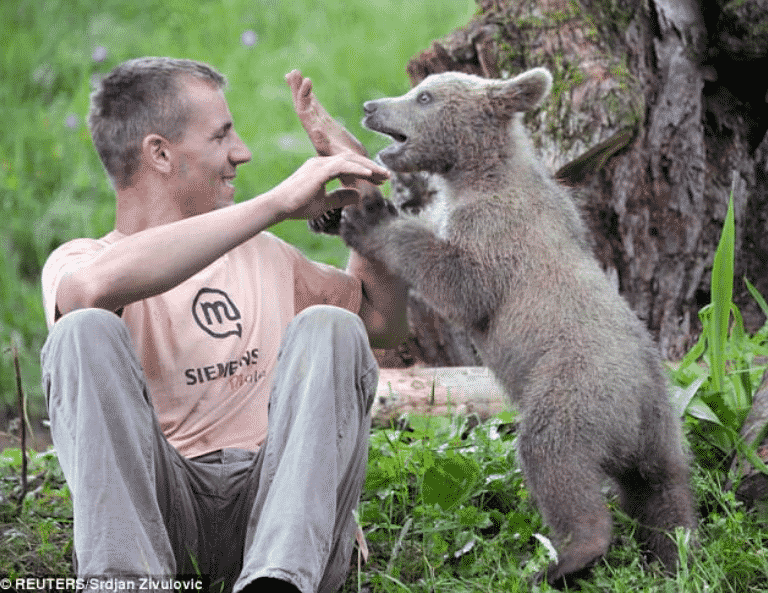 The Logar family decided that they would adopt Medo and keep him as their own. They named him Medo Srecko (Lucky the Bear) and from that point on Medo would be part of the family. It wasn’t long before he settled in nicely. 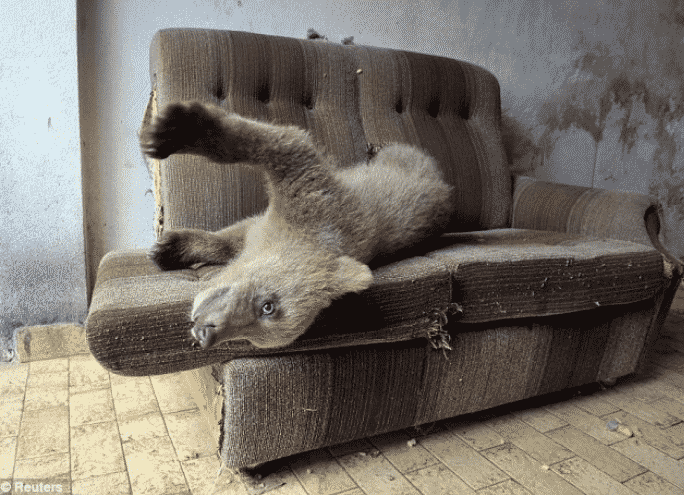 It didn’t take much time for Medo to warm up to the family. Soon enough he was play-fighting with his adoptive father and rolling around in the grass in the backyard. Life was looking pretty swell for this young brown bear. 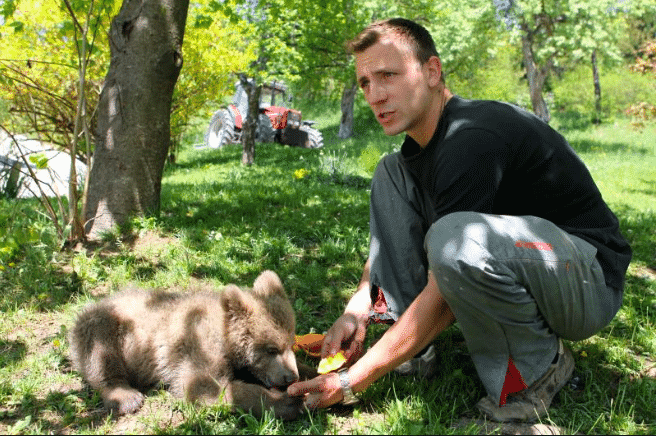 Eventually, the family began to petition for permission to build an enclosure on their land. That way Medo can roam around freely and live with them without a problem. However, the situation hasn’t been looking too good for them. 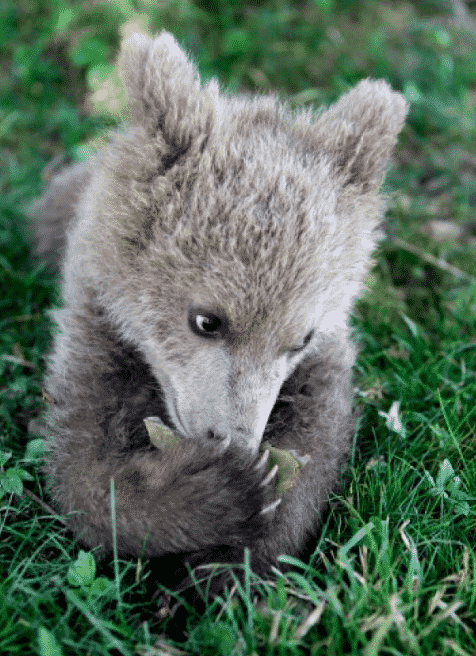 So far, the Logar’s request has not been taken seriously. The country’s environment inspectors and vets have stated that building an enclosure for the bear would be far too dangerous. Instead, they have offered another solution that the family finds unacceptable. 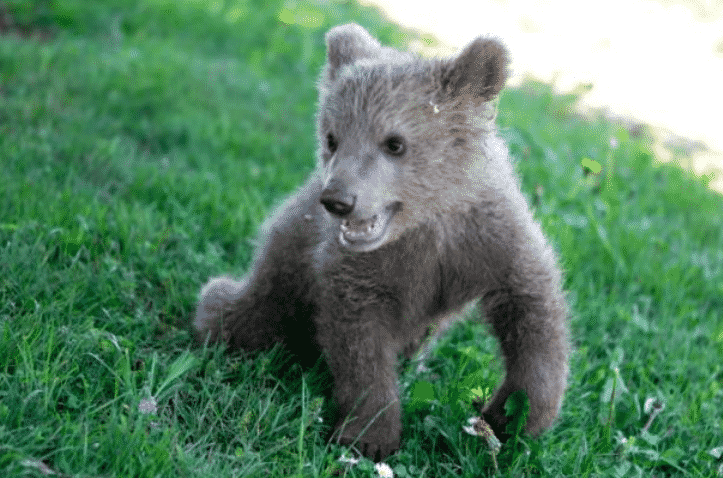 The government instead has been urging the family to send Medo to an animal shelter where they feel he will be properly looked after. However, the family has grown far too attached to Medo to let him go without a fight. Eventually though, the Logar’s realized that Medo was getting too big. 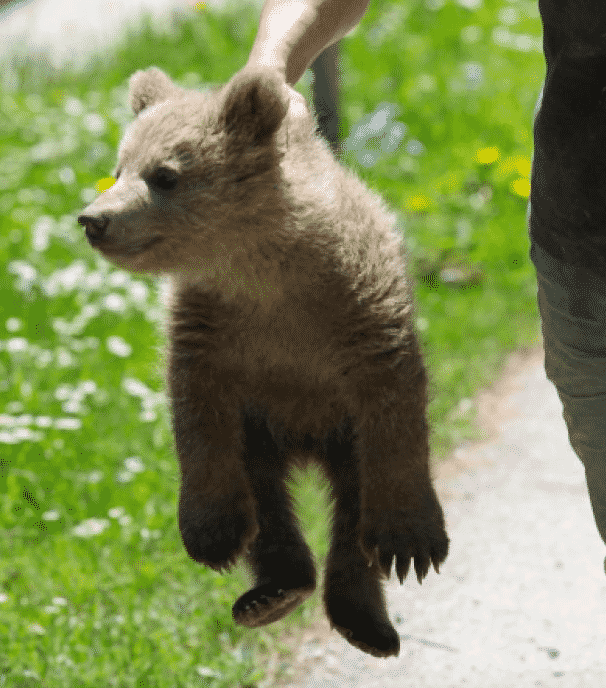 Eventually, the family realized that they had to do what was best for Medo. They agreed to send him off to an animal shelter where he would be looked after. However, the plans didn’t go quite the way it was intended to! 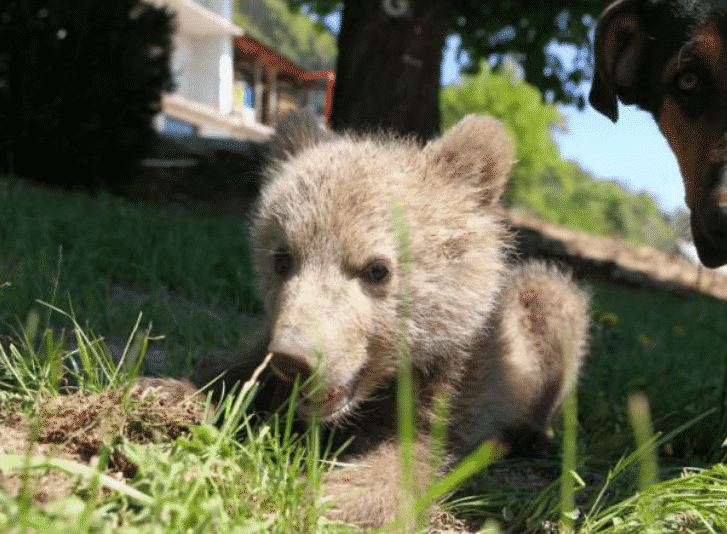 Right before Medo could be sent off to the shelter he went missing. Someone had apparently come in and stolen him. Everyone was shocked and went looking for him! 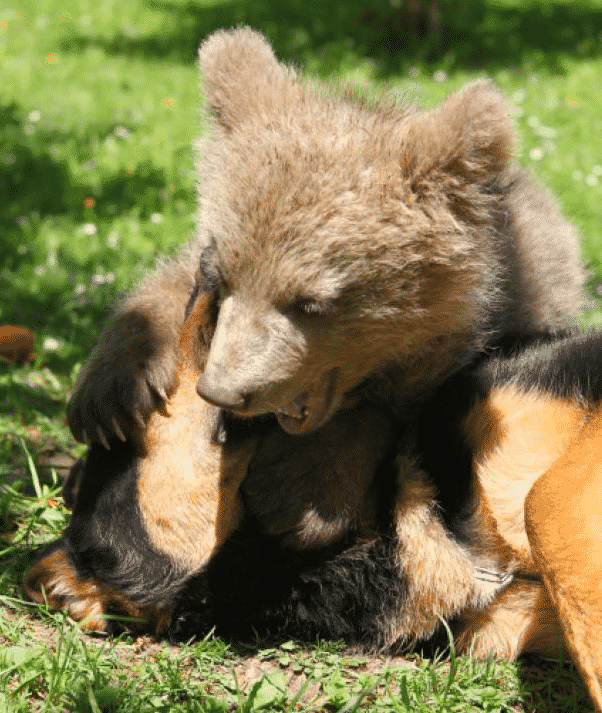 Eventually Medo was found and he was in great shape. Everyone was relieved and happy that he would be going to a better place. Medo was then brought to the animal shelter. 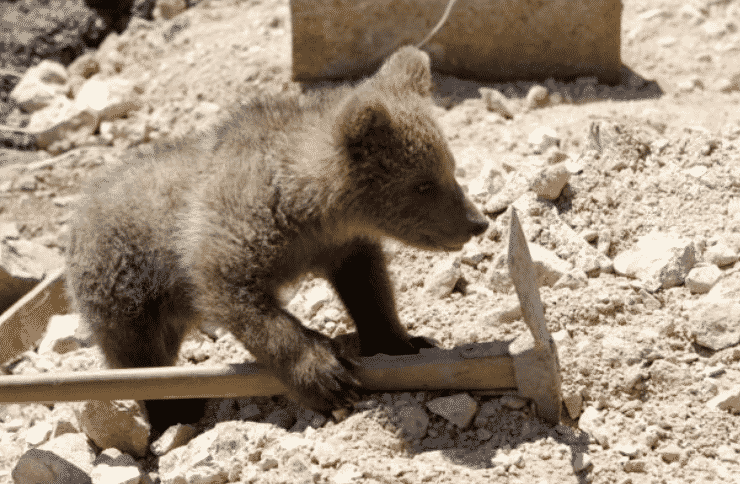 Now Medo is living out his life in a bear sanctuary. He is enjoying being around other bears like him and his family can come and see him whenever they’d like. Now he has all the space to move around and enjoy his life. 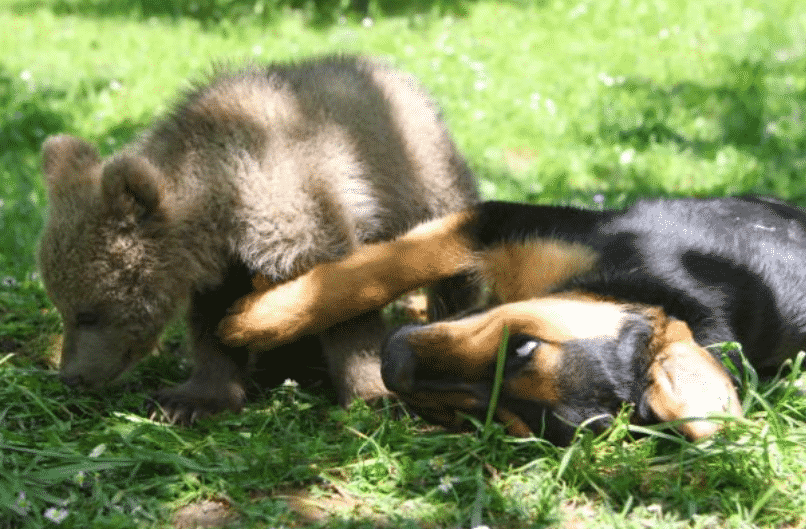