Wild Whale Hits Diver With His Fin, Turns Out It Was Protecting Her From A Shark

An ordinary October morning turns out to be a nightmare of an encounter for a professional marine biologist. This story is not only chilling but ends with a pleasant twist. It also inspires millions from all over the world to join hands in an effort to save whales and preserve the oceanic lifestyle for generations to come. 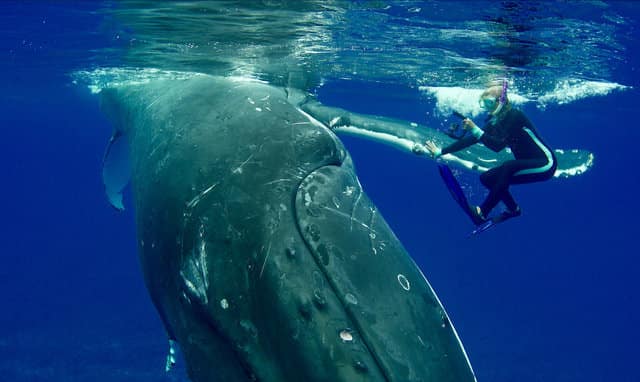 Whales are often dreaded due to their massive size and ability to cause damage, but this story has a happy note. As Nan Hauser, a seasoned marine biologist, and diver recalls it today; even though her underwater experience with a giant humpback whale was terrifying as h***, she was surprised to make a startling discovery. 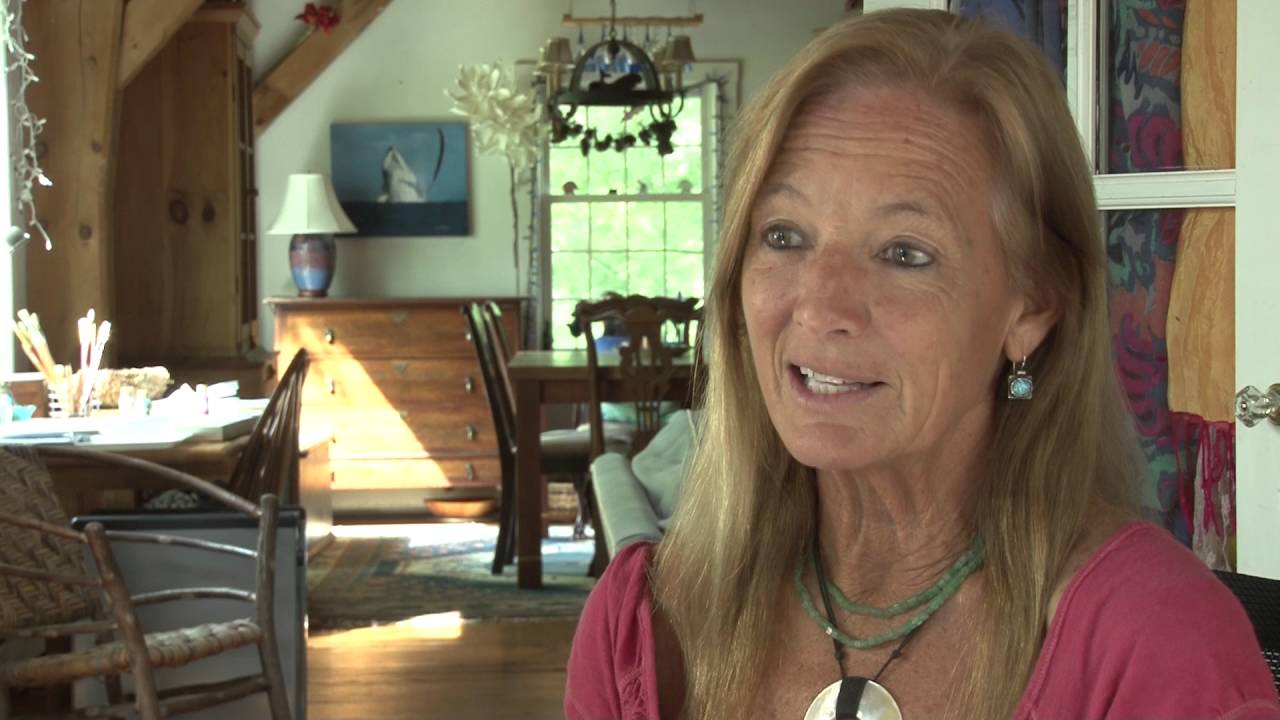 Nan Hauser has been working as a marine biologist for close to three decades. Last October was supposed to be a regular month of the year where she was supposed to take a dive and observe marine life.

However, things suddenly took a wild turn in an unusually persistent manner where a humpback whale swam up to Hauser out of nowhere. She panicked! I know I would, especially after seeing a massive sea creature headed my way at high speed. 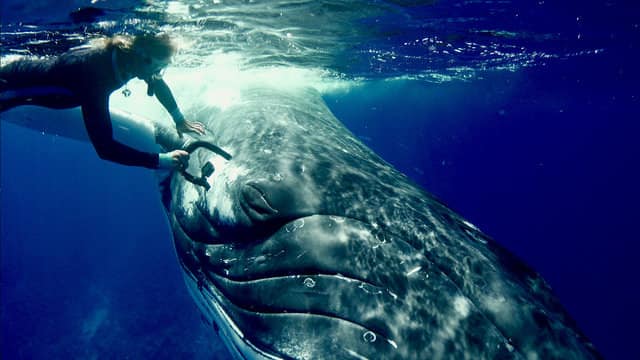 At first, the marine biologist couldn’t figure out what the whale was trying to do. Her best guess was that the humpback whale probably wanted to settle the score over an underwater territorial dispute.

16. It Could Have Been A Dispute Over Underwater Territory 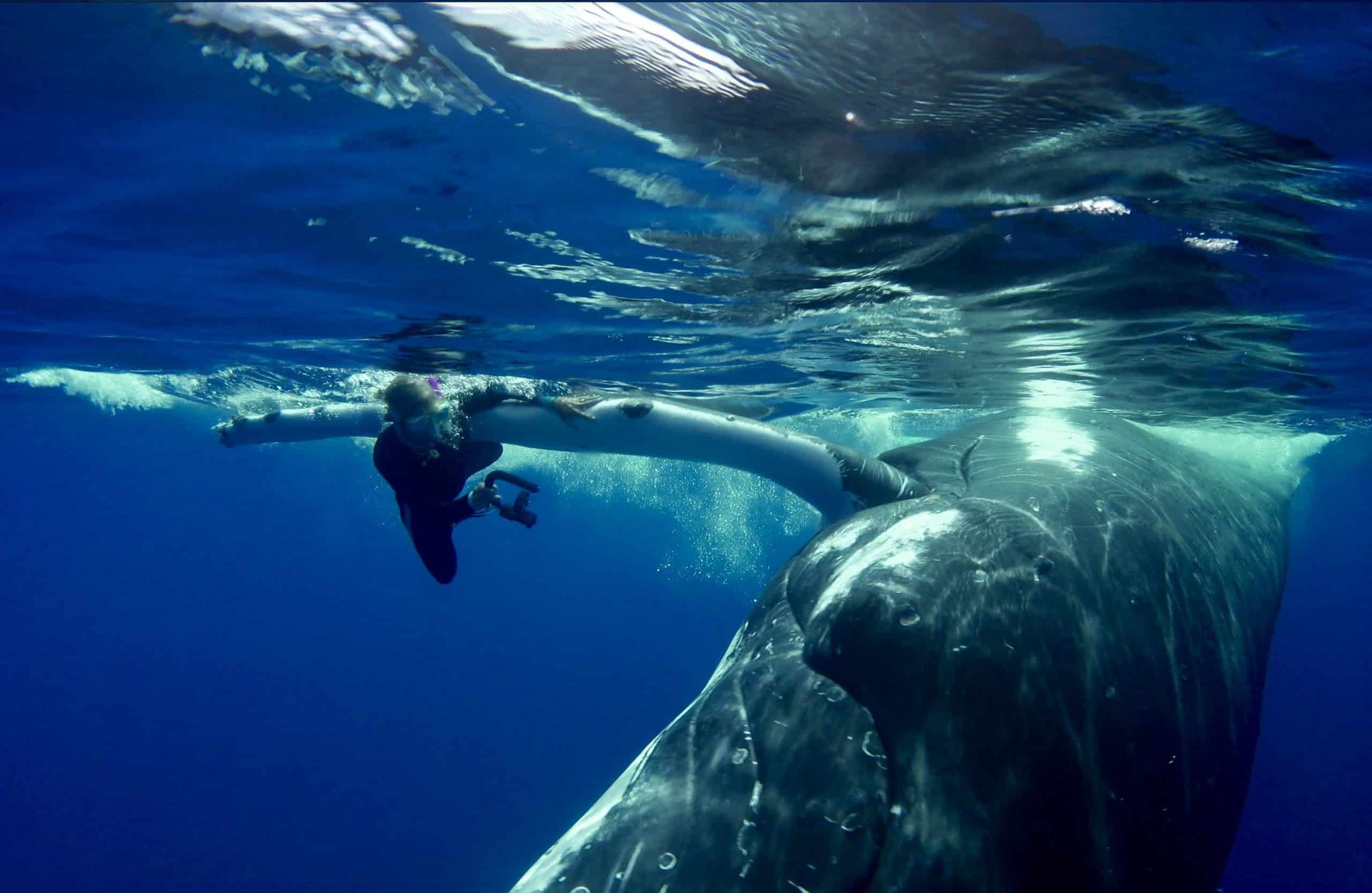 Of course, during the mating season, whales can be aggressive and all signs pointed out to the fish’s “intentions” of crushing Nan Hauser to her premature death. 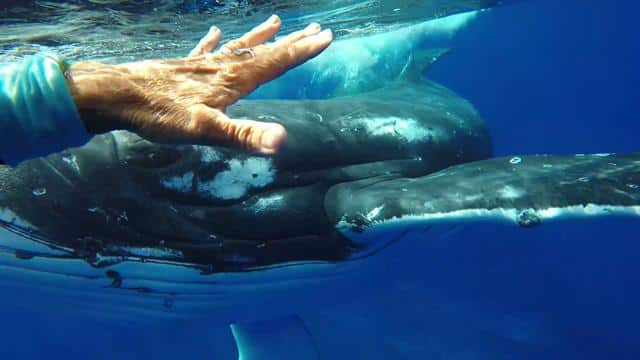 “He just wouldn’t stop touching me and I kept trying to get away from the whale as much as possible,” said Hauser in a recent interview.

The whale’s action was apparently misleading because it wanted to tuck Nan Hauser underneath his massive pectoral fin. Sometimes the whale would turn around and put his eye right next to the diver!

14. One Massive Tail Flip Is More Than Enough to Kill a Human 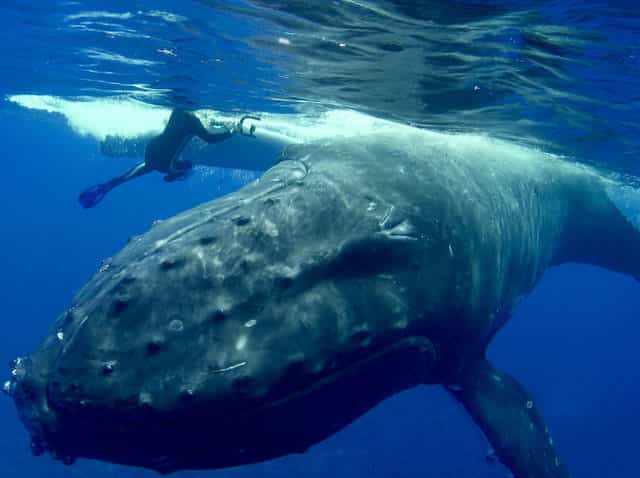 Hauser naturally assumed that the whale was angry and wanted her to be out of the water. Eventually, when the marine biologist did get a chance to “escape”, the whale suddenly hurled the diver on his fin in an effort to throw the diver off balance.

13. Things Suddenly Took a Wild Turn for the Diver 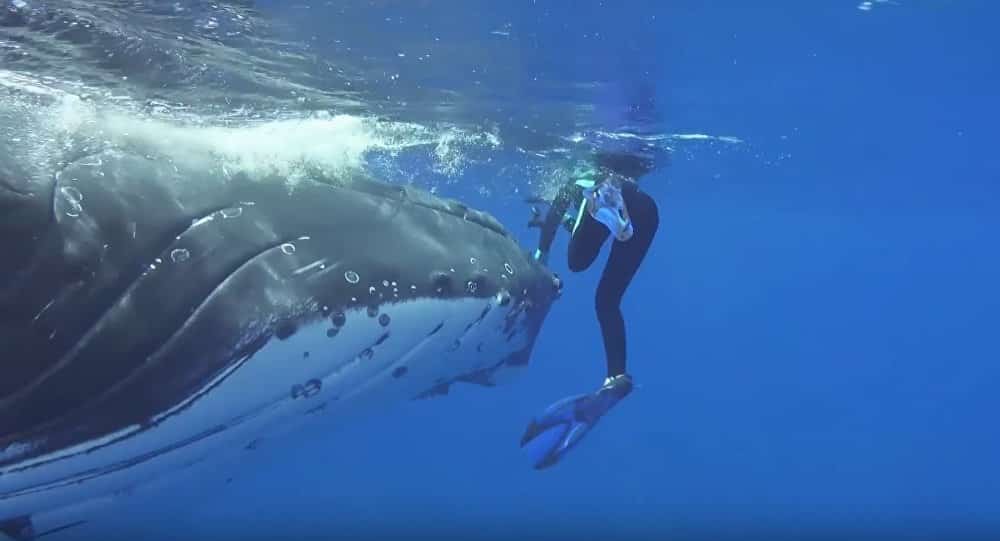 Panic ensued, but Hauser somehow managed to control her nerves. Things became imminently clear after about 10 minutes when a great tiger shark closing in. What happens next is totally going to terrify you…

12. Doing Its Best to Protect The Diver From a Massive Shark 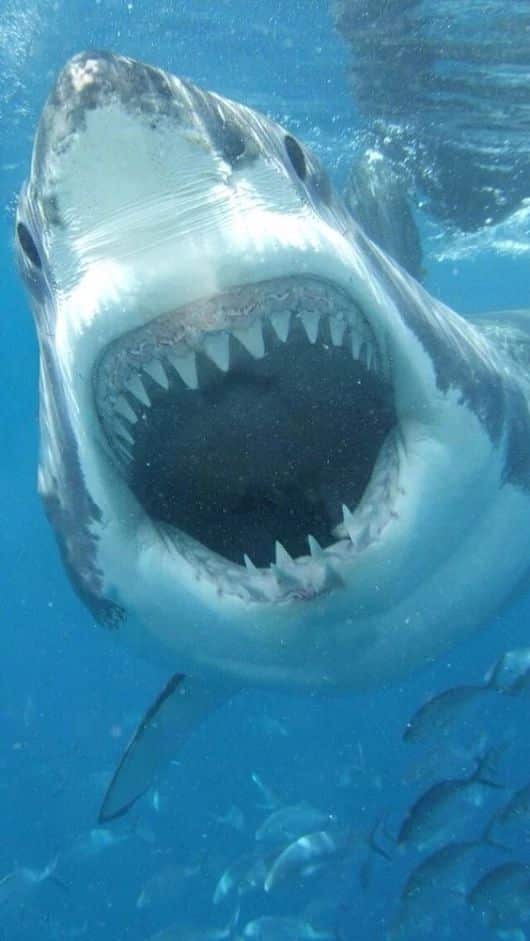 The predator was moving its tail in a side-by-side direction that led the marine biologist to realize that the whale was trying to protect her from the shark. It was exactly in the moment when Nan realized that the whale was the least of her worries. In fact, the big fella’ was doing his best to keep the shark at bay.

11. “I Thought Death Was Imminent” 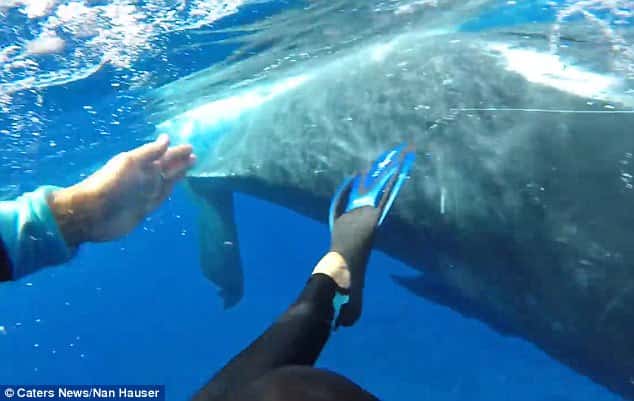 Hauser said, “I thought my camera crew was going to end up filming my death. But I finally took my eye off the whale and saw a tiger shark closing in. It was one of the largest sharks I’ve ever seen in my entire life!” 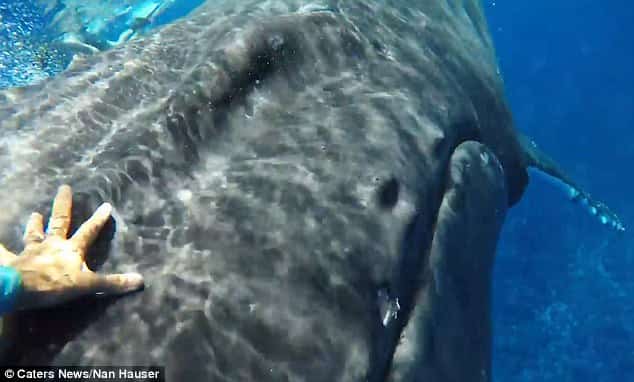 Things escalated to a quick resolution of the matter. The whale splashed its massive tale and scare the shark away. However, while doing so, he wasn’t alone in this underwater tussle.

9. Warding Off the Shark Wasn’t Easy 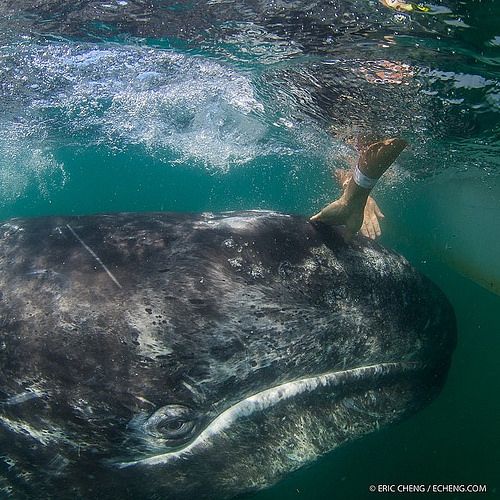 Nan Hauser said that she did notice an effigy of another whale at a distance. Looks like that other humpback whale joined the “rescue” operation later and wanted to help the poor diver as much as possible.

8. Hauser Is Happy to be Alive Again 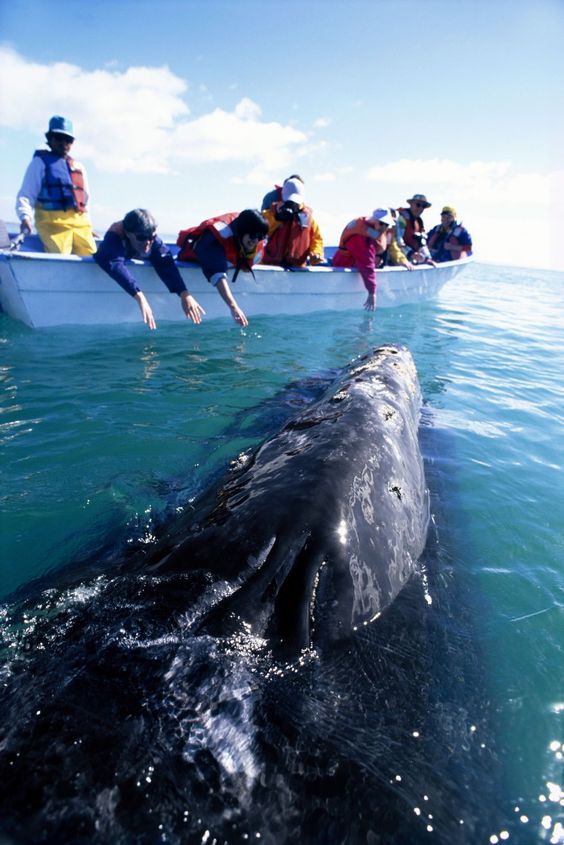 When the moment was right, the whale pushed Nan Hauser to her boat above the water. Her entire crew was waiting on board, at which point they all pulled the diver in. Several moments and serious bruises later, Hauser expressed her gratitude to be alive and breathing again. 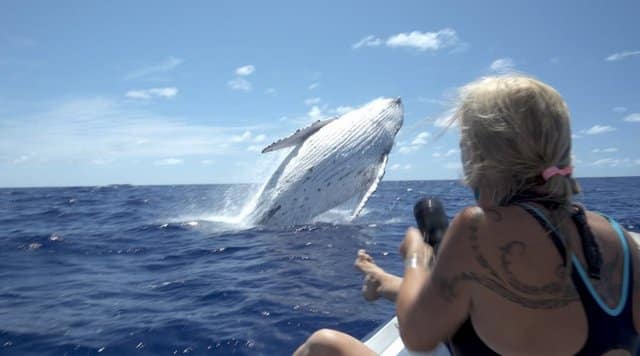 As the boat soared away to its destination, both Hauser and the crew could see the whale following them. Sometimes, the big dude would spring up above the water’s surface to keep an eye on the boat. “I guess, this humpback whale was just making sure that we were all alive and safe,” said Nan Hauser.

6. Humpback Whales Can Be Highly Aggressive and Unpredictable 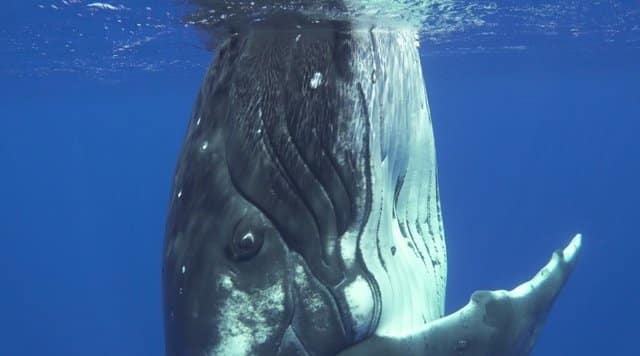 Humpback whales are a fierce creature. But despite of their massive size and ferocity, they have been known to help other sea creature in trouble. It was a lucky day for Hauser to end up under that whale’s radar. Otherwise, she’d have been that tiger shark’s meal. 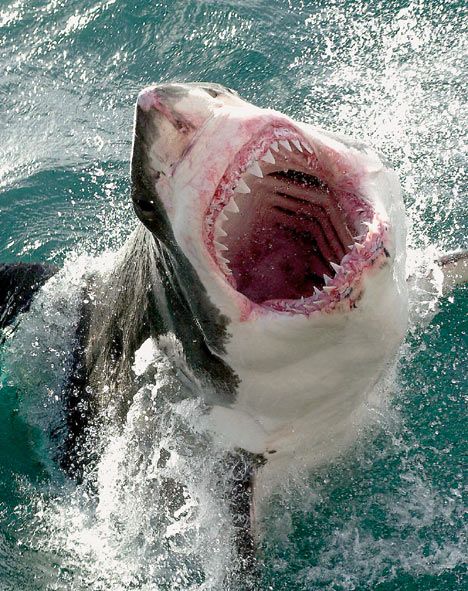 To this day, Hauser’s encounter has not only been documented, but telecasted on several TV shows over and over again. Above all, the incident provokes attention towards the fact that whales are an endangered species and they need as much help as possible. 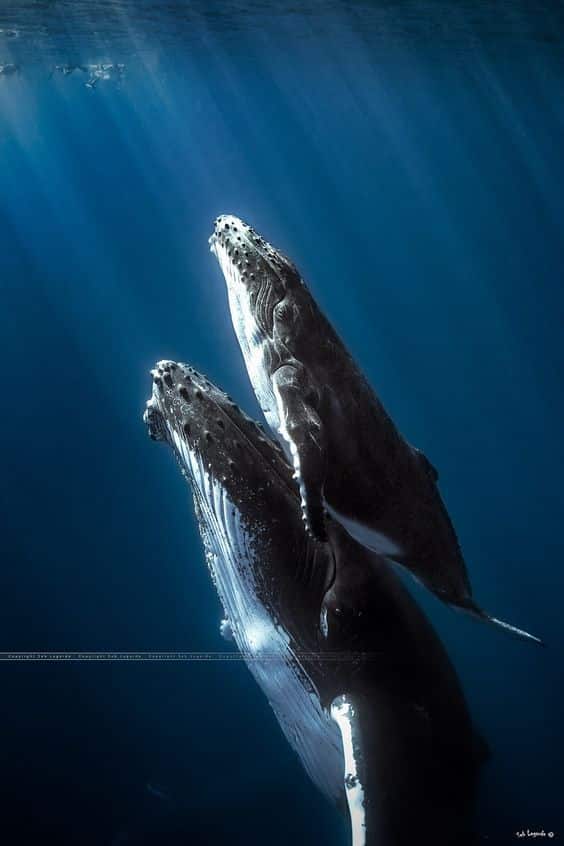 The most we can do is keep our waters pollution free so that fish can live, breathe and thrive in a clean environment. Especially when it comes to whale, their population has decreased to a handful over the last 6 decades.

3. Nan Revisits Her Old Friend In The Sea

Nan Hauser later on said that she visited the same sea site several months later and encountered the whale again. At first, Hauser thought that the whale didn’t recognize her, but suddenly she could see the giant pectoral fins sprouted to the sides as if the whale wanted to give out a hug.

2. Reaching Out for a Big Hug 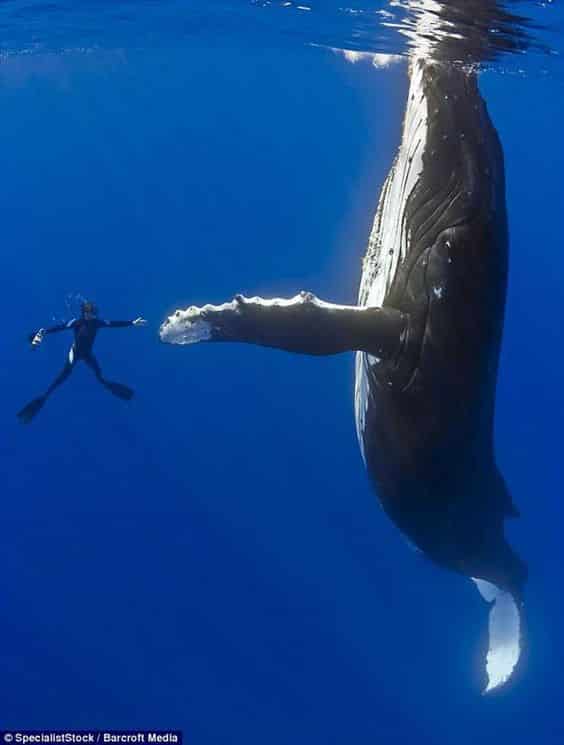 “I thought the whale didn’t recognize me, but it came up right underneath me with his beautiful fins out and put his flippers around and hugged me!” 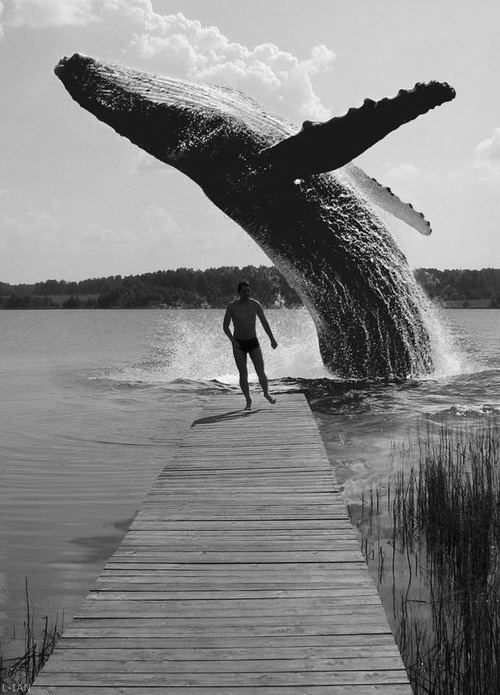 The story has inspired millions online to be more thoughtful about underwater ecosystem. We all need to be a voice for the creatures and endangered species that fall victim to toxic dumpsters, plastic ingestion and vice versa.