For many young children, a comfort object brings them a sense of security. Whether it’s a blanket or a stuffed toy, they often won’t be seen separated from it. Believe it or not, but sometimes the same thing can happen with animals too! Just check out how this one lion reacted to his new toy – you’ll be left speechless.

In 2004, animal rescue group Big Cat Rescue heard about a neglected and abandoned lion. The lion was being abused at a roadside zoo and the rescue group knew they had to intervene. So they decided to travel to the New Hampshire zoo to save him! 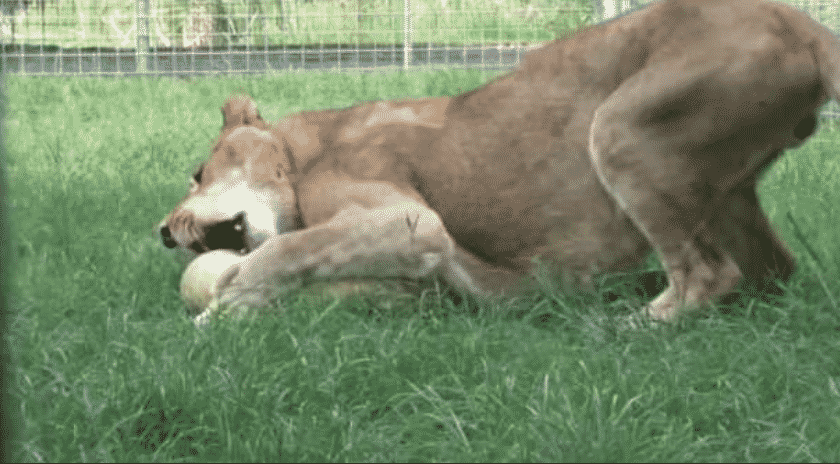 The lion’s name was Cameron and he was grateful to have been pulled away from such a terrible living situation. Once he was brought over to his new place, Cameron began to flourish. Things were really starting to look up for him. 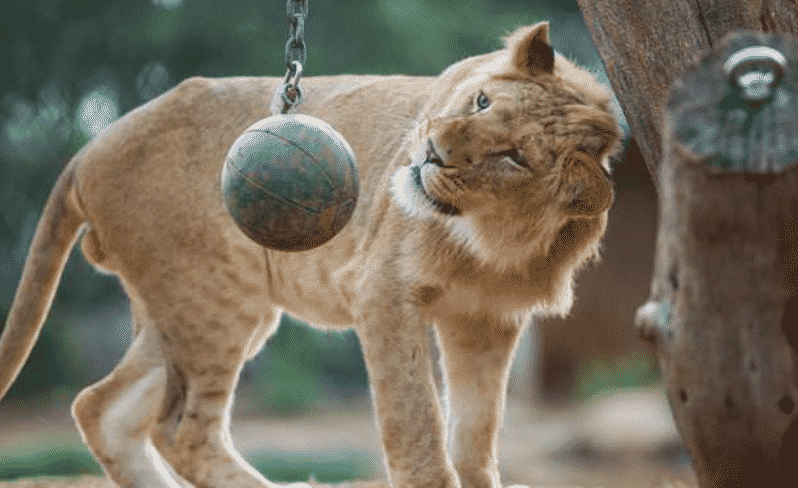 Cameron spent a lot of his recovery time making new friends and relaxing in his new environment. Still, the rescue group wanted to ensure that they were doing everything possible to make the lion comfortable. So they decided to introduce something new into the lion’s life. 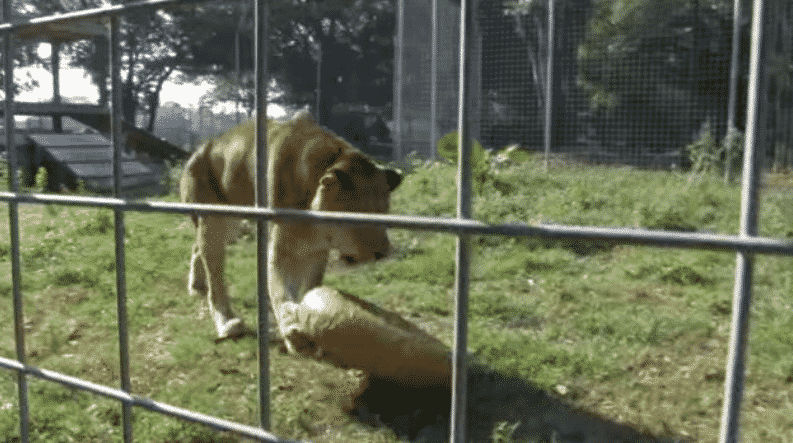 The staff decided that they wanted to find Cameron an item that would act as his “security blanket.” They weren’t exactly sure what they would use, however. So they began to brainstorm ideas. 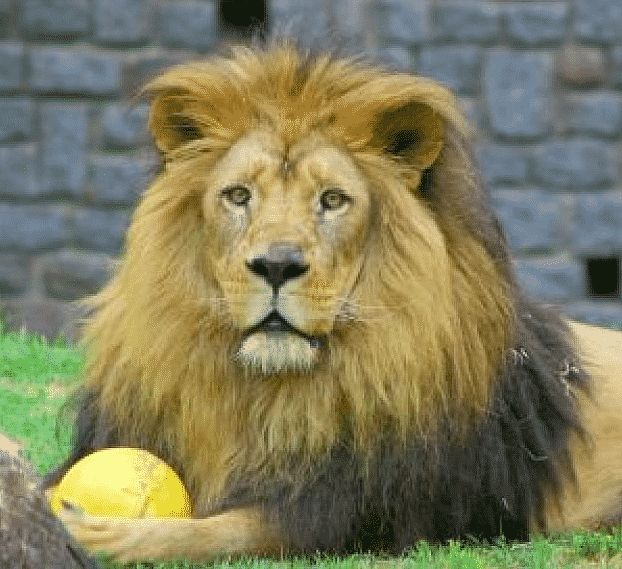 Eventually, the staff all agreed on one specific toy. So one day, they brought the toy over to Cameron’s enclosure. They had no idea how he would react to it… 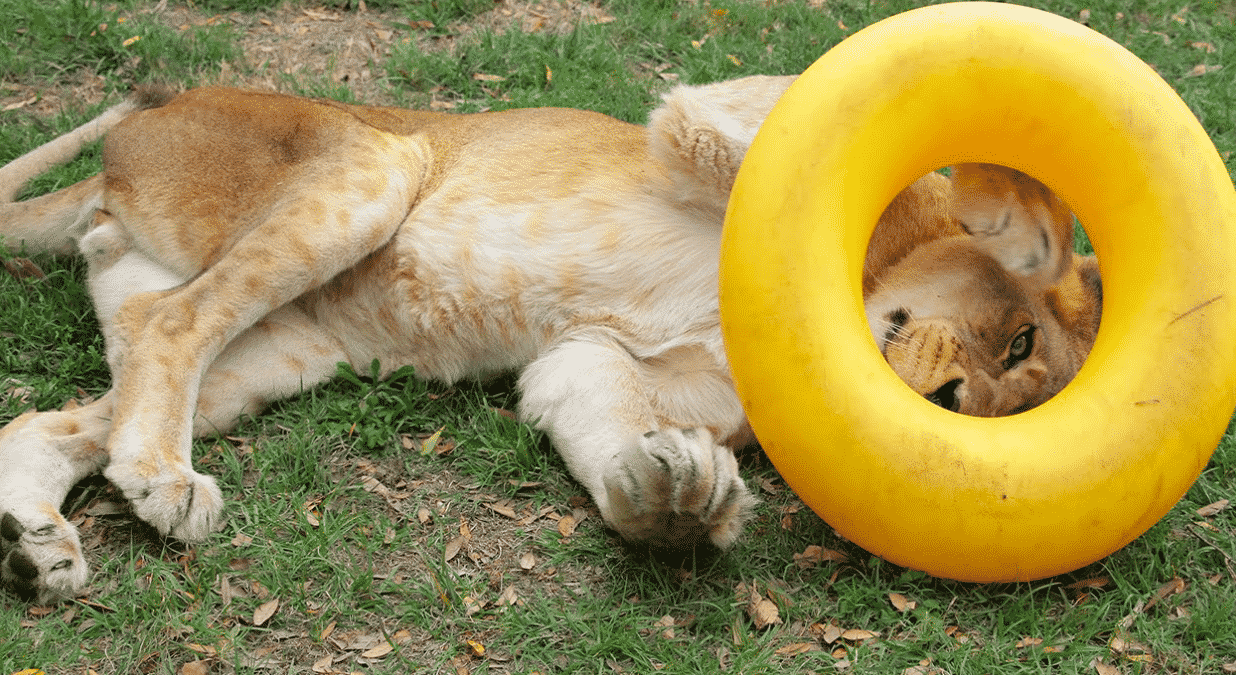 Cameron’s reaction was immediately written all over his face. The staff had picked out a yellow doughnut for Cameron to play with. They had no idea just how much attention Cameron would begin to give his toy. 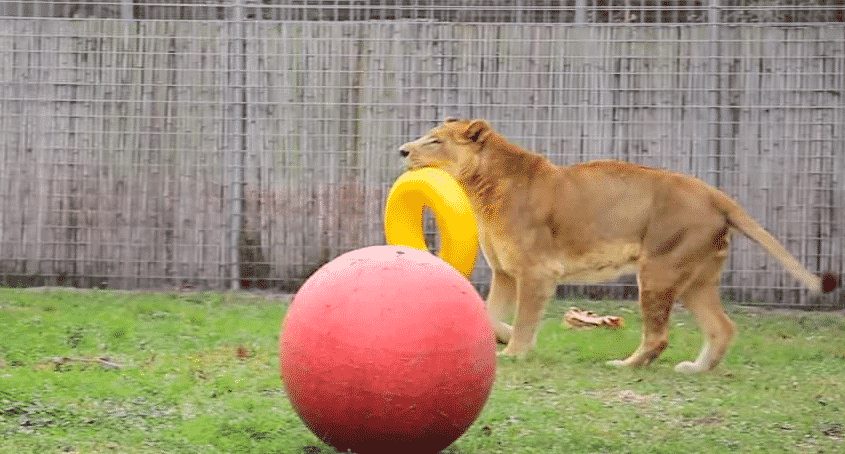 Cameron and his yellow doughnut were inseparable. The lion would play with it all the time, however, this ended up causing a huge problem. Cameron played with it so much that it was broken beyond repair… 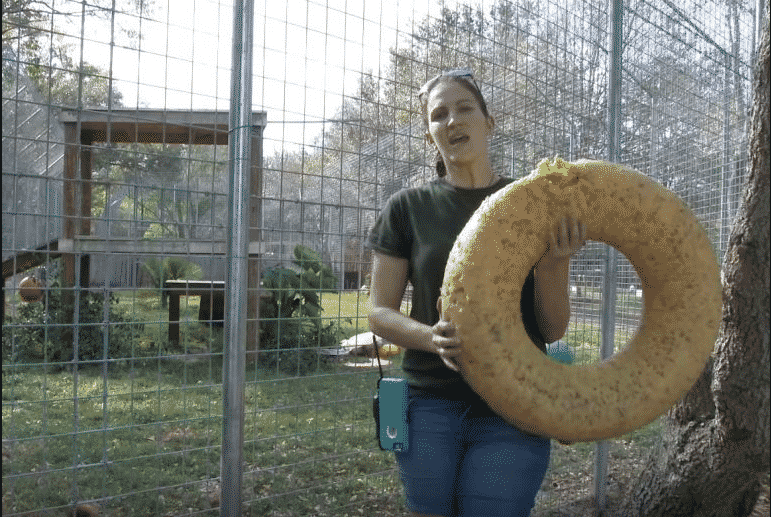 Since the toy was so broken, the staff had no choice but to take it away. Cameron’s reaction to this change was unbelievable. He was completely broken and sad. The staff knew they had to do something… 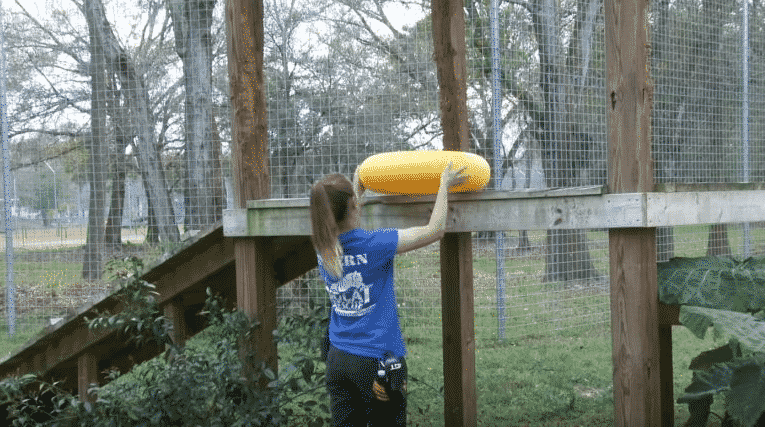 Although the staff felt bad about upsetting Cameron, they knew they couldn’t have left that half chewed up toy in his enclosure. In order to cheer him back up, the staff decided to bring Cameron something that they knew he would love. They couldn’t wait to see the look on his face!

Inside of the enclosure was Cameron’s pal, Zabu. She was the first to discover the newly replaced yellow doughnut. She looked the toy over, sniffing it out of curiosity and then backed away from it. It was a curious interaction. 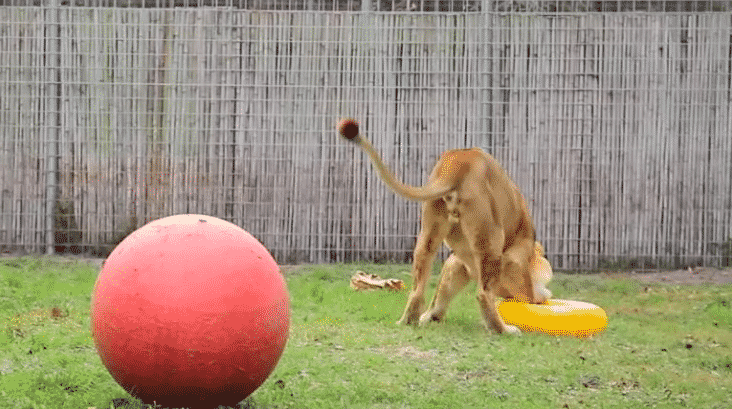 It was better off that Zabu didn’t get too curious about the yellow doughnut. After all, it was meant for Cameron and he didn’t seem to keen on sharing his first version of the doughnut. Then the moment finally came when Cameron noticed the replacement. 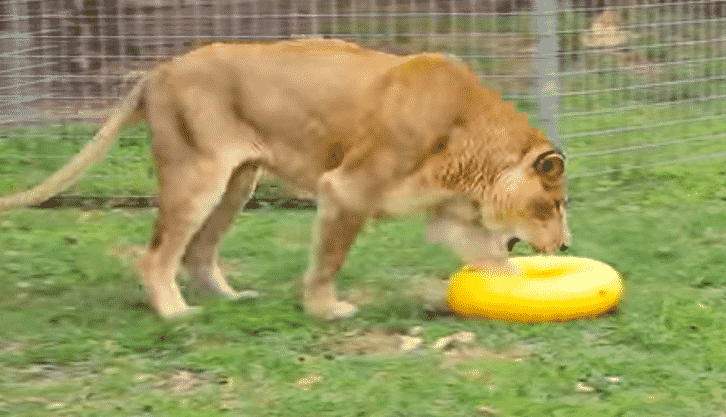 Cameron was unbelievably happy to find the yellow doughnut waiting for him inside of the enclosure. The staff worried that Cameron may have been too attached to the original doughnut, but that didn’t seem to be the case. The lion was happier than ever. 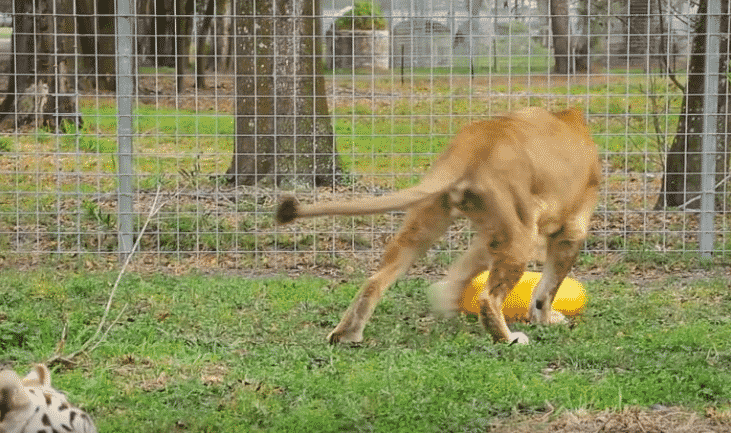 Cameron couldn’t wait to begin playing with his new yellow doughnut. He quickly sprung into action and began to put it to good use. He was thrilled and the staff was even happier for him. 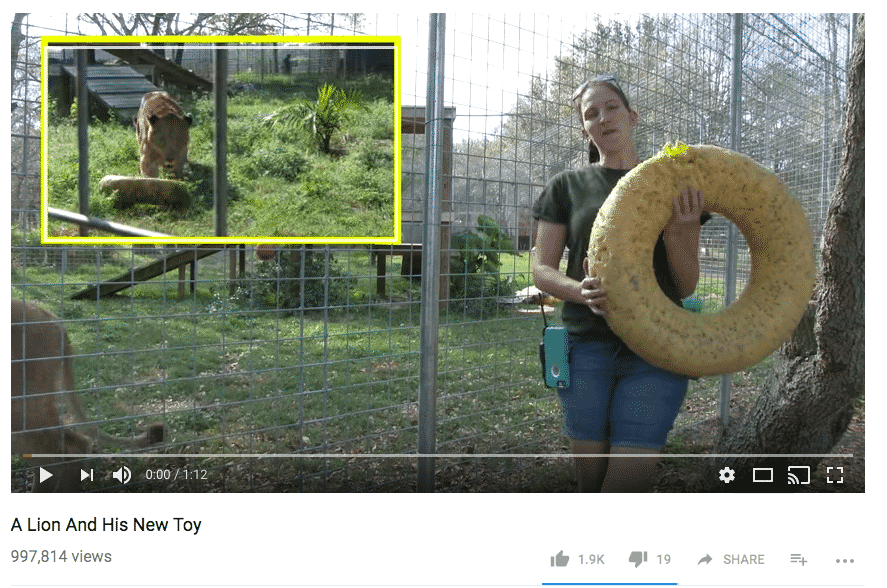 Since the interaction between Cameron and the yellow doughnut is so unique, the staff decided to film Cameron’s initial reaction. As an educational resource, the rescue group then uploaded the video to YouTube and boy did it get a lot of attention!

The video was uploaded onto YouTube where it has since received 900,000+ views. Everyone was excited to see the lion playing around with his comfort toy. After all, it isn’t something you get to see every day… 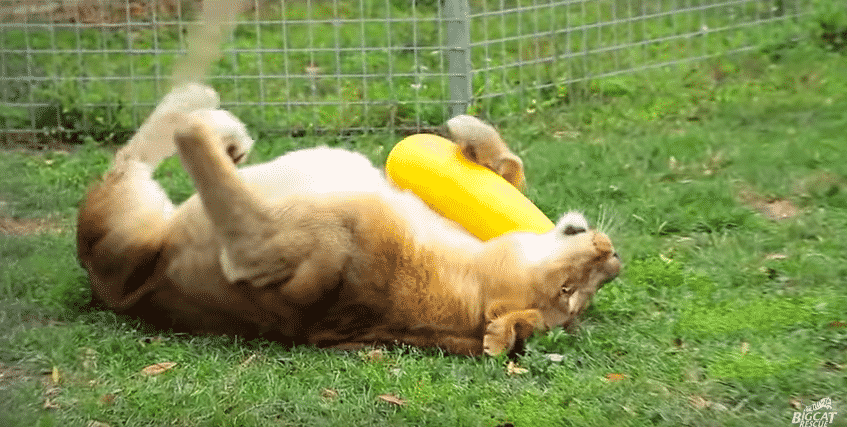 The reactions coming in from people were flooded with positivity. Everyone was so happy that the animal rescue group was not only focusing on the lion’s physical wellbeing, but his mental wellbeing as well. You won’t believe what some people had to say… 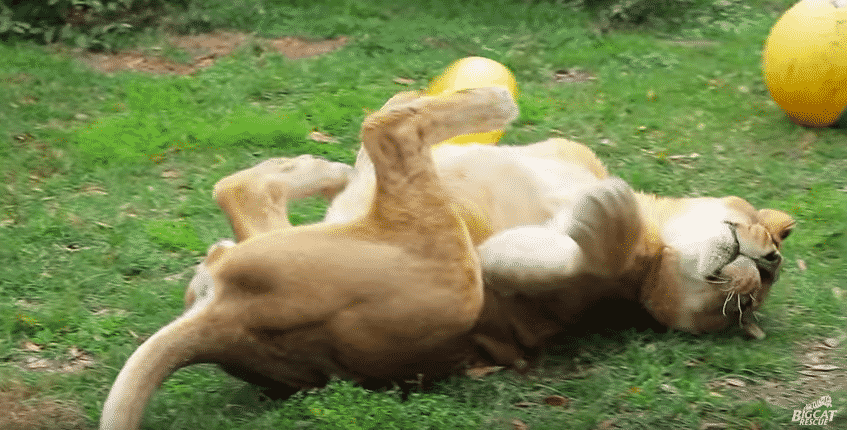 One commenter wrote: “There’s no way you can see this without smiling. Watching fierce powerful majestic creatures acting so silly is really funny.” Still, more people began to left cheerful comments commending the team at their great efforts. 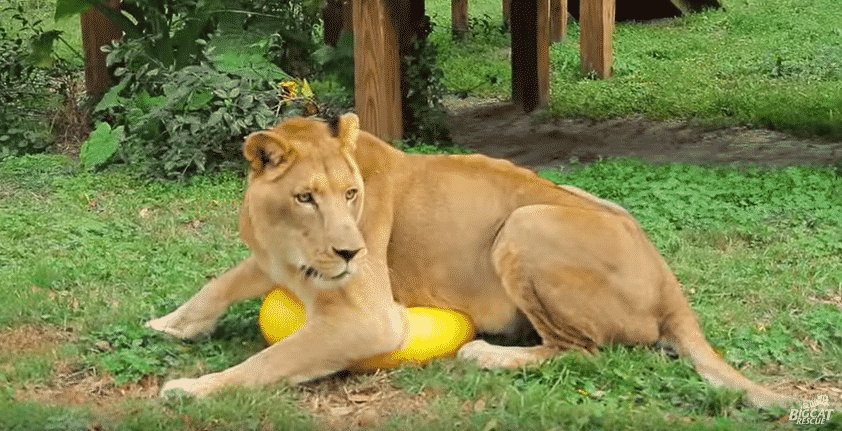 Another commenter wrote: “One of the best things I love that you do different than other sanctuaries is that you care about their mental status. Thank you for all of your kindness and hard work.” 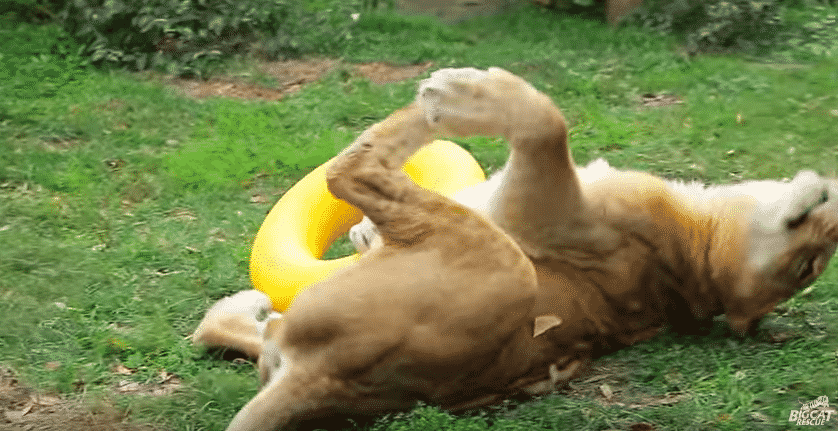 It is pretty amazing to see a huge lion act so goofy with a little yellow toy doughnut. You can really see the playful nature of Cameron and how happy he is to be in much better living conditions. His life has greatly improved for the better in so many ways. 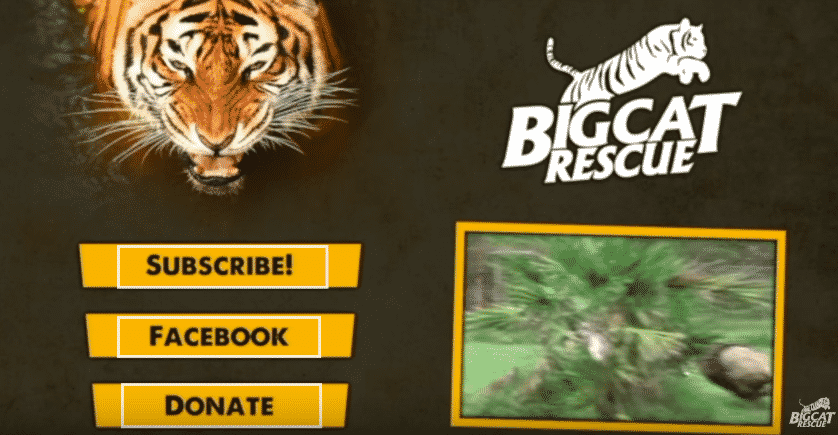 Thanks to dedicated rescue groups, like Big Cat Rescue, animals stand a second chance at life. It is through the dedication of these people that abused animals can once again find a reason to be playful and happy once more.